University City (UCity), a suburb of St. Louis, Missouri, began its curbside recycling program in March 1973. This makes it one of the first cities in the country to do so. By the early 1970s, many communities had created a recycling drop-off center and encouraged residents to haul their recycling to that destination. This required extra effort, and the city manager and public works staff in University City believed that other solutions needed to be developed. These recycling bins document the launch of this solution and the change required over time to reduce, reuse, and recycle. It certainly required rethinking!

The first Earth Day helped galvanize public engagement in environmentalism, and recycling was one of the primary issues in University City. Residents supported innovative thinking, and city officials assigned Public Works Director Allan Dierckgraef responsibility for figuring out how to get environmental materials out of a home or business while keeping them out of the dump and funneling them to recycling processors. UCity officials decided that they would start with newspapers, so in March 1973 they launched the TreeSaver program. 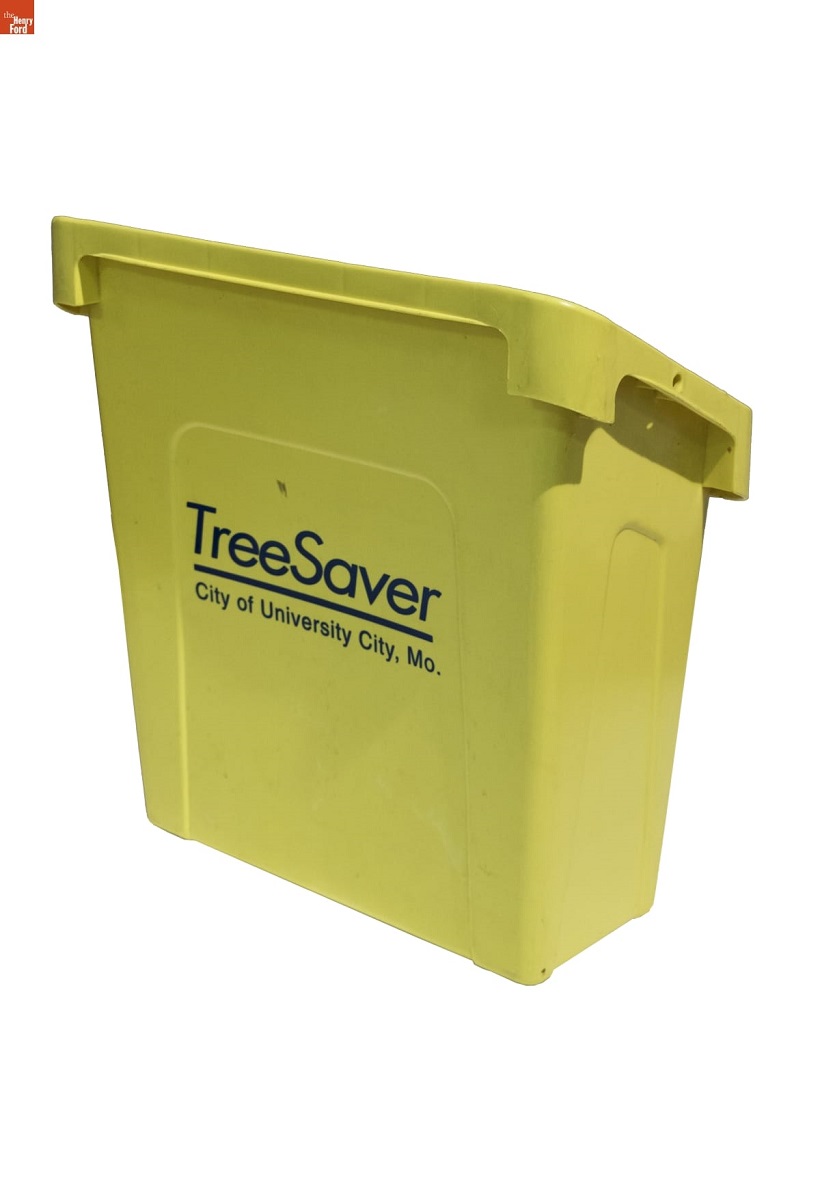 Dierckgraef reached out to the Monsanto Corporation, headquartered in St. Louis, to design a durable container to hold two weeks of newspaper. The yellow plastic TreeSaver container resulted from this work. UCity purchased 12,000 of these bins for $43,000 and distributed one to each home along with instructions about how to use them. Need exceeded supply, and the city ordered more containers. The one pictured above is from the second run.

The sanitation division picked the containers up every two weeks, and the city contracted with the Alton (Illinois) Box Board Company to haul the materials away for further processing. Two years into the process, in March 1975, the St. Louis Post-Dispatch claimed that the "U. City Recycling Program [Was] In Trouble." The fee received from Alton Box Board Co. ($10 per ton) was below the market rate ($35 per ton) for newsprint. This reflected the rapid adoption of newspaper recycling programs—because supply exceeded demand, the amount processing companies were willing to pay dropped. City officials continued to justify the cost by turning to real environmental savings. City Manager Charles T. Henry (1959–1975) called the city-wide newspaper salvage “one of the most important recent accomplishments” (Post-Dispatch, May 15, 1975). Eight years into the program, in 1981, city officials estimated that recycling newsprint kept 85,000 trees from the paper mill. 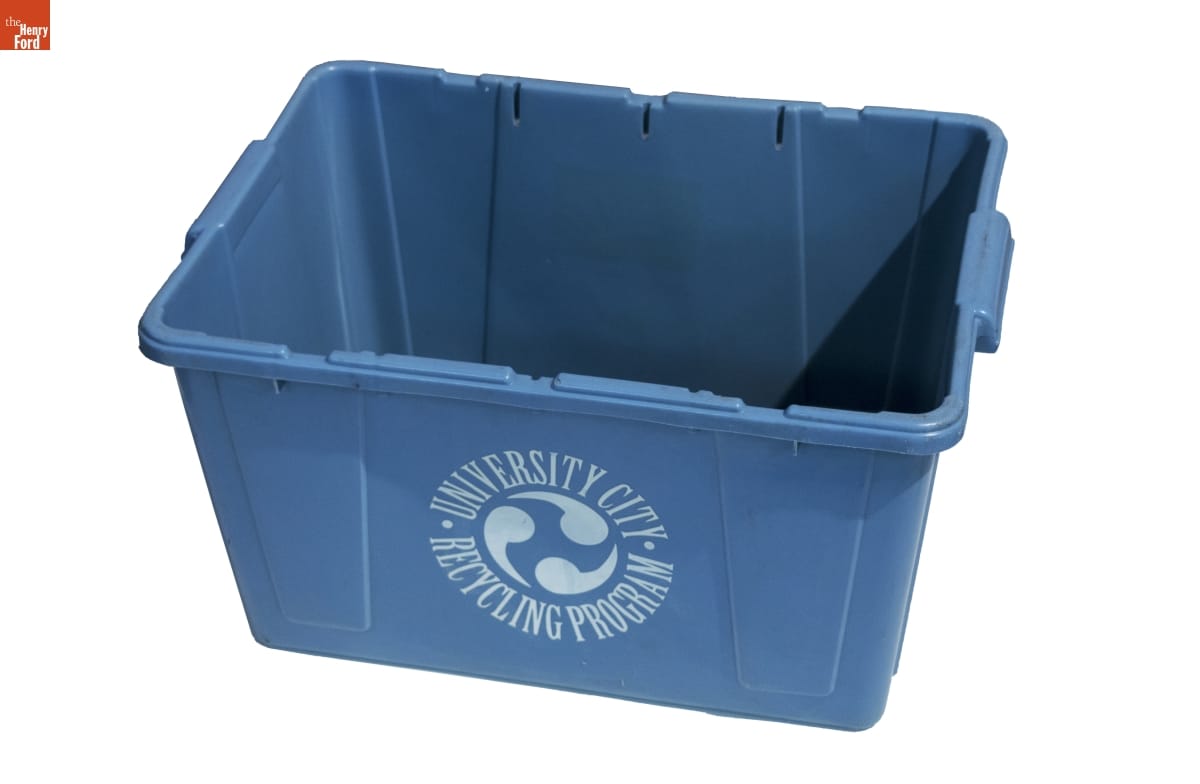 The yellow bins supported one recycling effort—newsprint. When UCity began expanding the program to divert other materials—metal cans and plastics—from the landfill during the 1980s, the city had to redesign its bins. They retained the yellow bin for newsprint and paper but added a blue bin for other materials to support the new dual-stream recycling initiative. The city also had to purchase new equipment to facilitate pick-up. This included new specially designed two-sided trucks. Public works staff picked up the yellow TreeSaver bins and emptied them on one side while they emptied the contents of the blue bins on other side. This physically taxing labor occurred at the transition point from home to recycling stream. 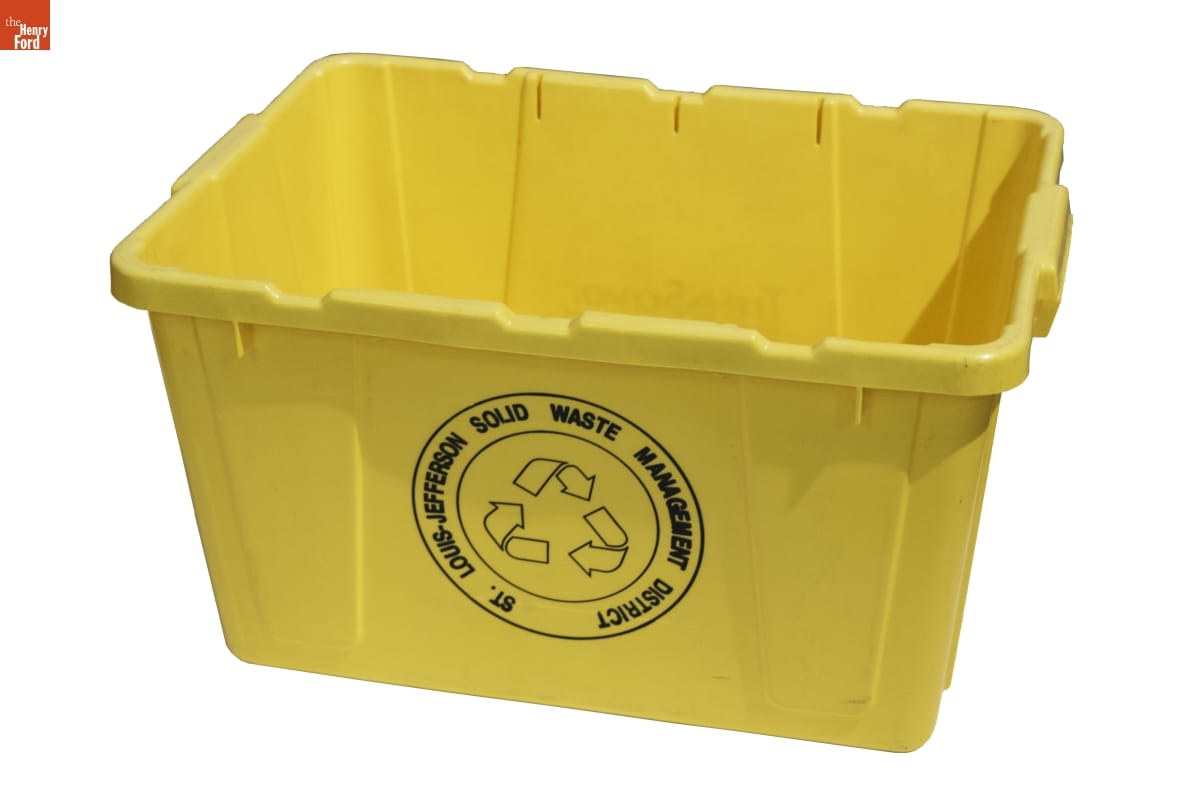 TreeSaver Recycling Bin, 18 Gallon with the Recycling Logo and the Larger Waste-Management System Specified, Designed for Use in University City, Missouri, 1988-1989. / THF181538

During the early days of mixed recycling, markets did not exist for non-sorted materials. Thus, UCity had to build a sorting facility and hire staff to separate the cans, glass, and plastic. Each then had a separate point of sale to recycled material processors.

These recycling bins represent some of the many details that municipalities had to manage to launch and sustain recycling programs. The act of collecting materials at the curb is just one small step in the enormous undertaking of reducing waste streams.