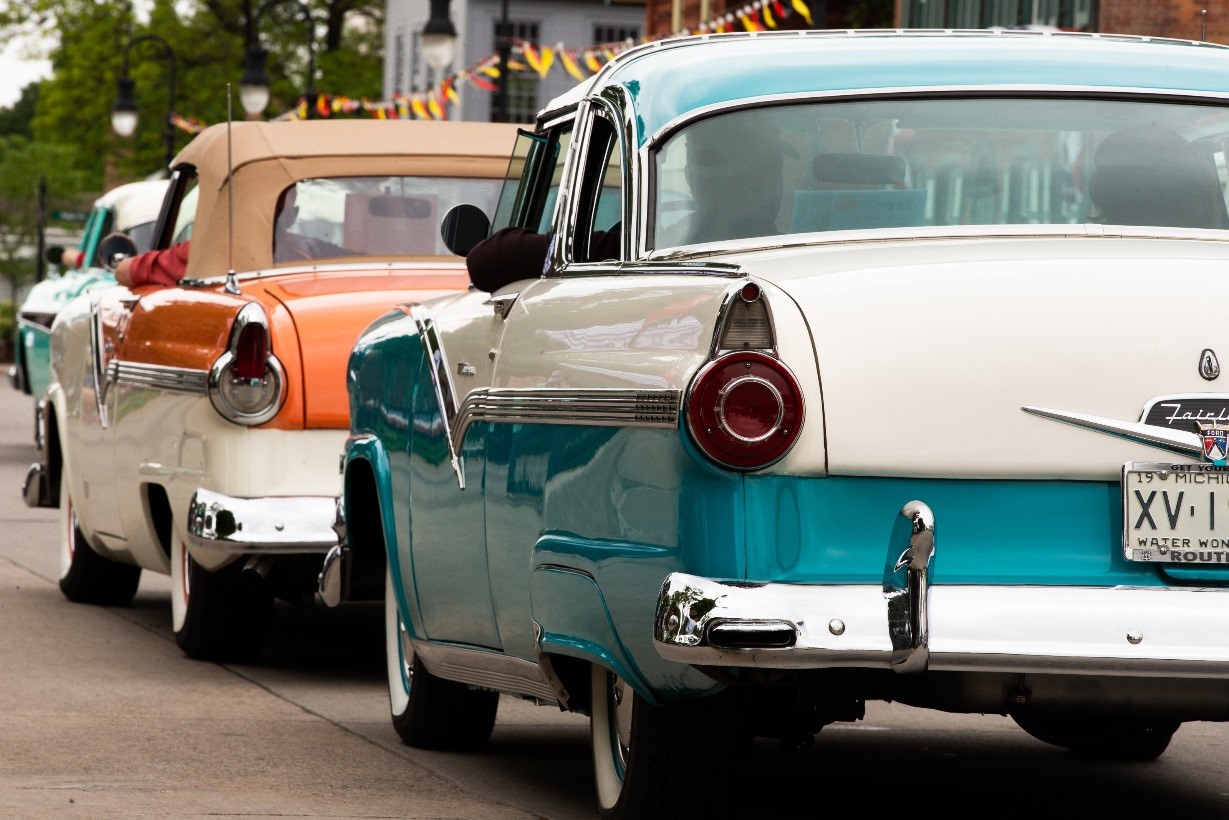 Tailfins, like those sprouting from this 1956 Ford Fairlane, were in the spotlight for 2019.

Gearheads descended on Greenfield Village again this June for our popular Motor Muster car show, featuring more than 600 automobiles, trucks, motorcycles, bicycles, and military vehicles from the 1930s through the 1970s. By our count, this year marked our 30th time presenting this one-of-a-kind event. Based on the crowd, Motor Muster is as popular – and as active – as ever.

Our theme this year was “Fabulous Fins,” those towering tailfins that defined 1950s American automotive design. After several years marking golden anniversaries for 1960s muscle and pony cars, we were overdue for a return to the decade that gave us rock and roll, hula hoops, Corvettes, and Thunderbirds. 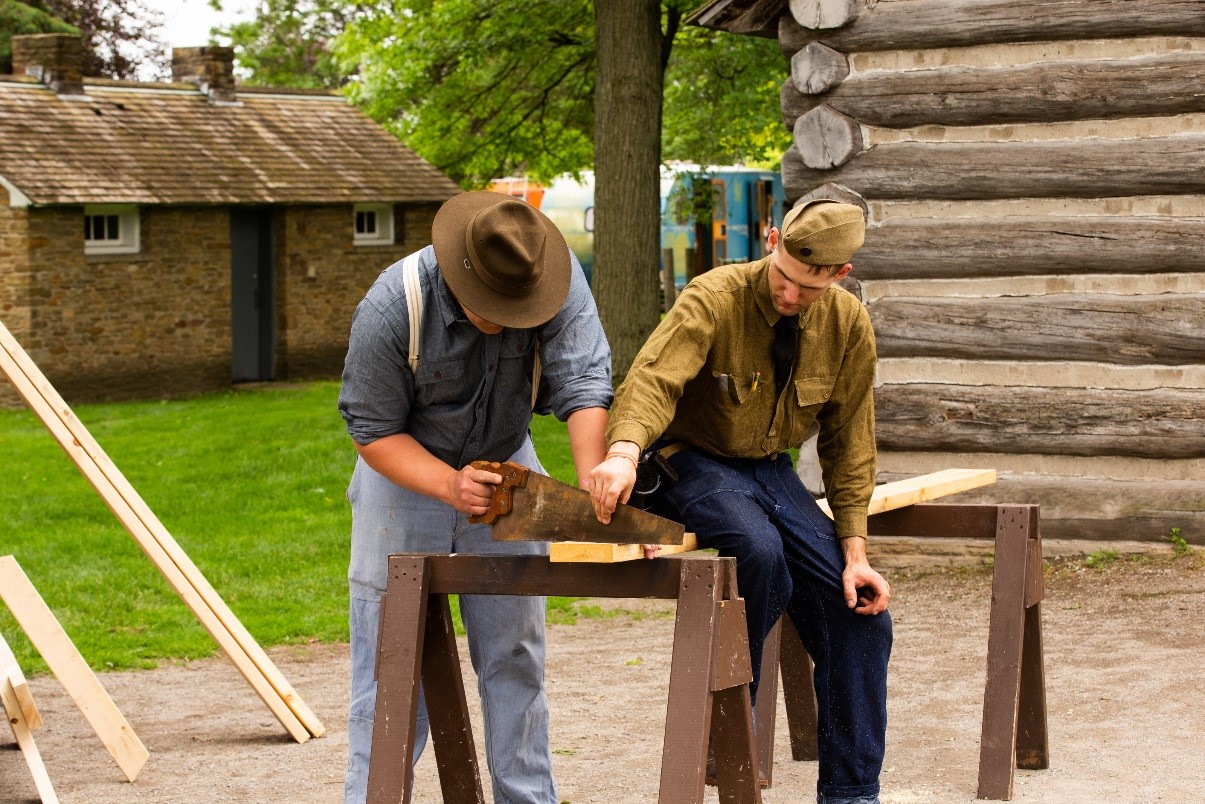 A pair of CCC recruits at work in front of the McGuffey School.

Once again we staged a series of historical vignettes around Greenfield Village that complemented each of the five decades represented in the show. The Depression years of the 1930s were recalled at the McGuffey School, where we staged a 1930s Civilian Conservation Corps camp. The three million young men who participated in the program over its nine-year run helped to plant forests, build parks and roadways, manage floodwaters and erosion, and stock streams and rivers with fish. 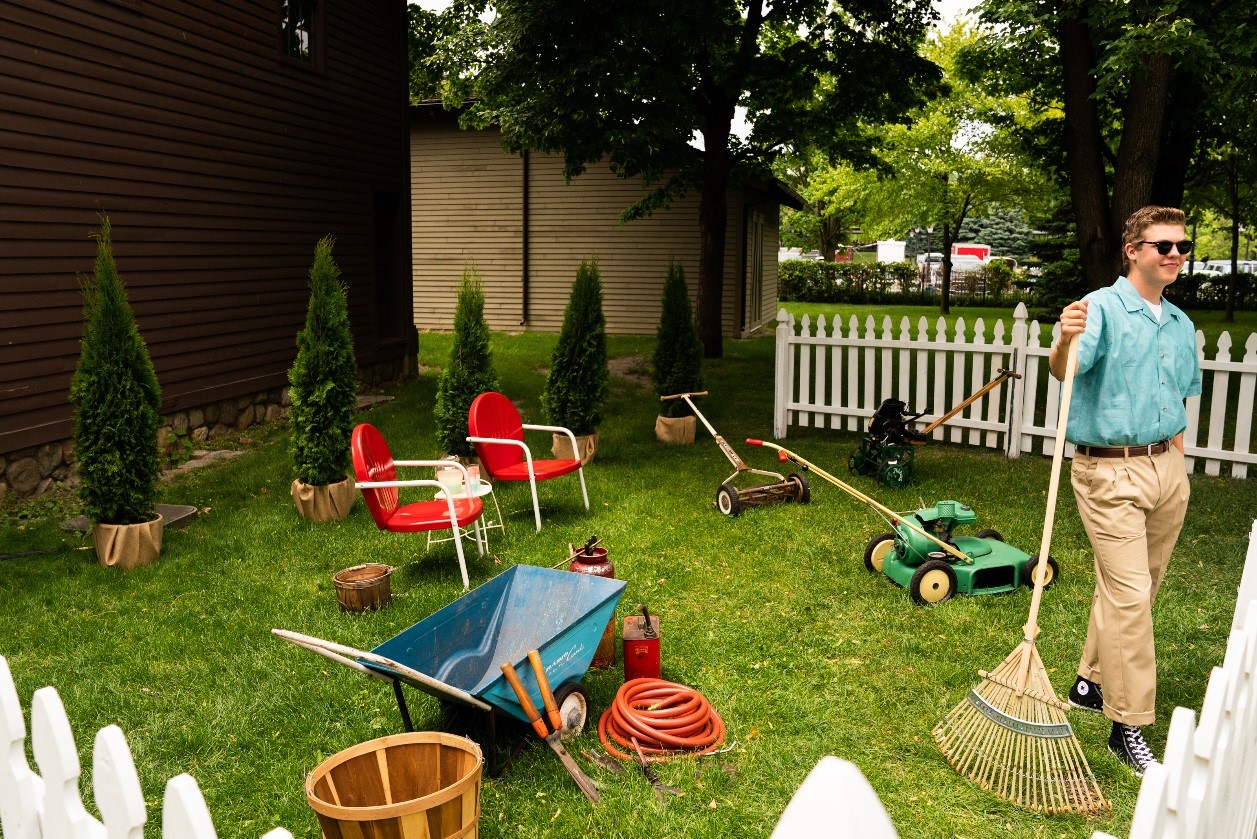 We remembered the war years of the 1940s with a victory garden, a scrap drive, and a live radio drama staged in front of visitors. There was food, too, with few menu items more popular than the spam sandwiches made with everyone’s favorite spiced canned ham. The postwar boom brought an exodus to the suburbs as returning GIs bought new homes for their young families. We saluted the proverbial “crabgrass frontier” with a display of vintage lawn mowing equipment. (If you think cutting in the hot sun with a gasoline mower is tough, try doing it with a genuine ’50s push mower!) 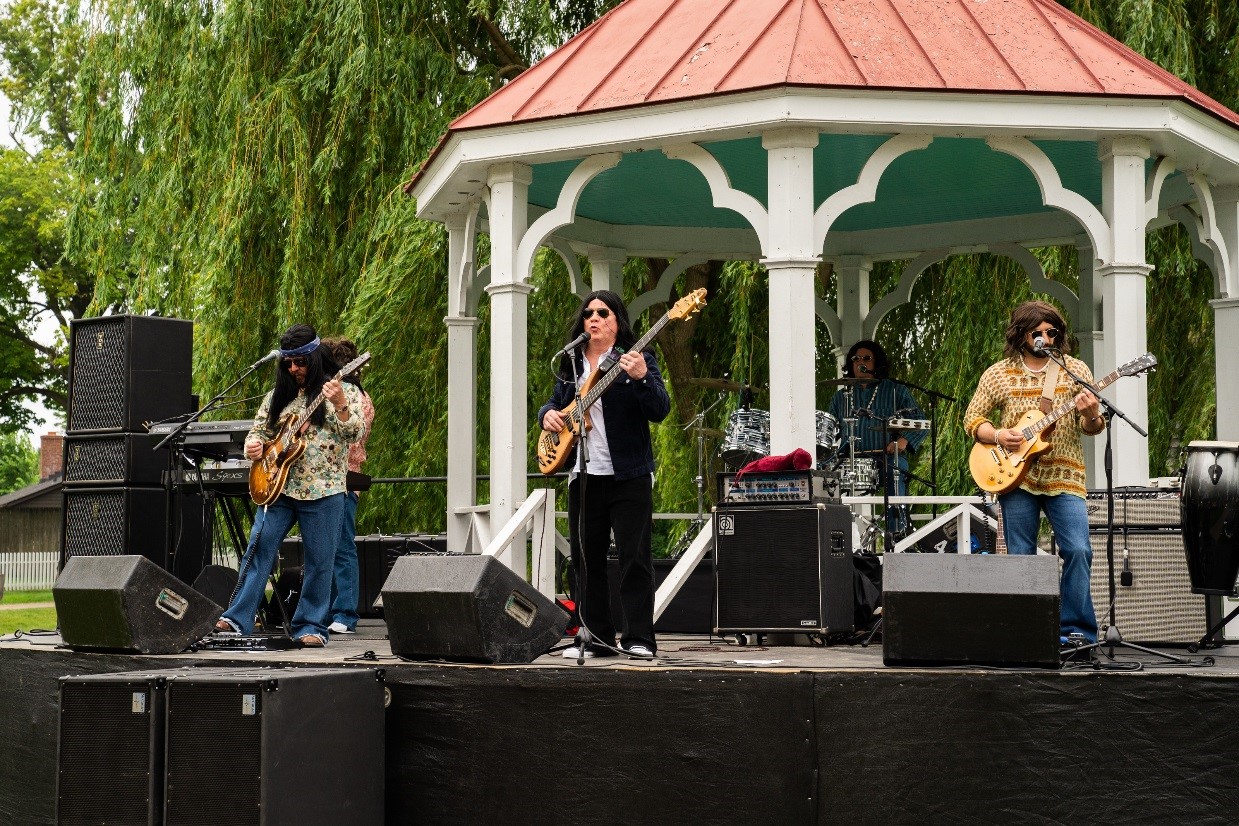 Far out ’70s rock, courtesy of the band Classic Gold, livened up the gazebo near the Ackley Covered Bridge.

For the 1960s, we remembered the classic kids-in-the-station-wagon cross-country family road trip, with an American nuclear family camped around their travel trailer. Interstate highways and economic prosperity opened the country to many families longing to see the U.S.A. in their Chevrolets (or Plymouths, or Fords) that decade. Those looking for a little pre-Fourth of July patriotism had only to wander over to the gazebo near the Ackley Covered Bridge, where we staged a bicentennial-themed picnic straight out of 1976 – complete with a classic rock concert. 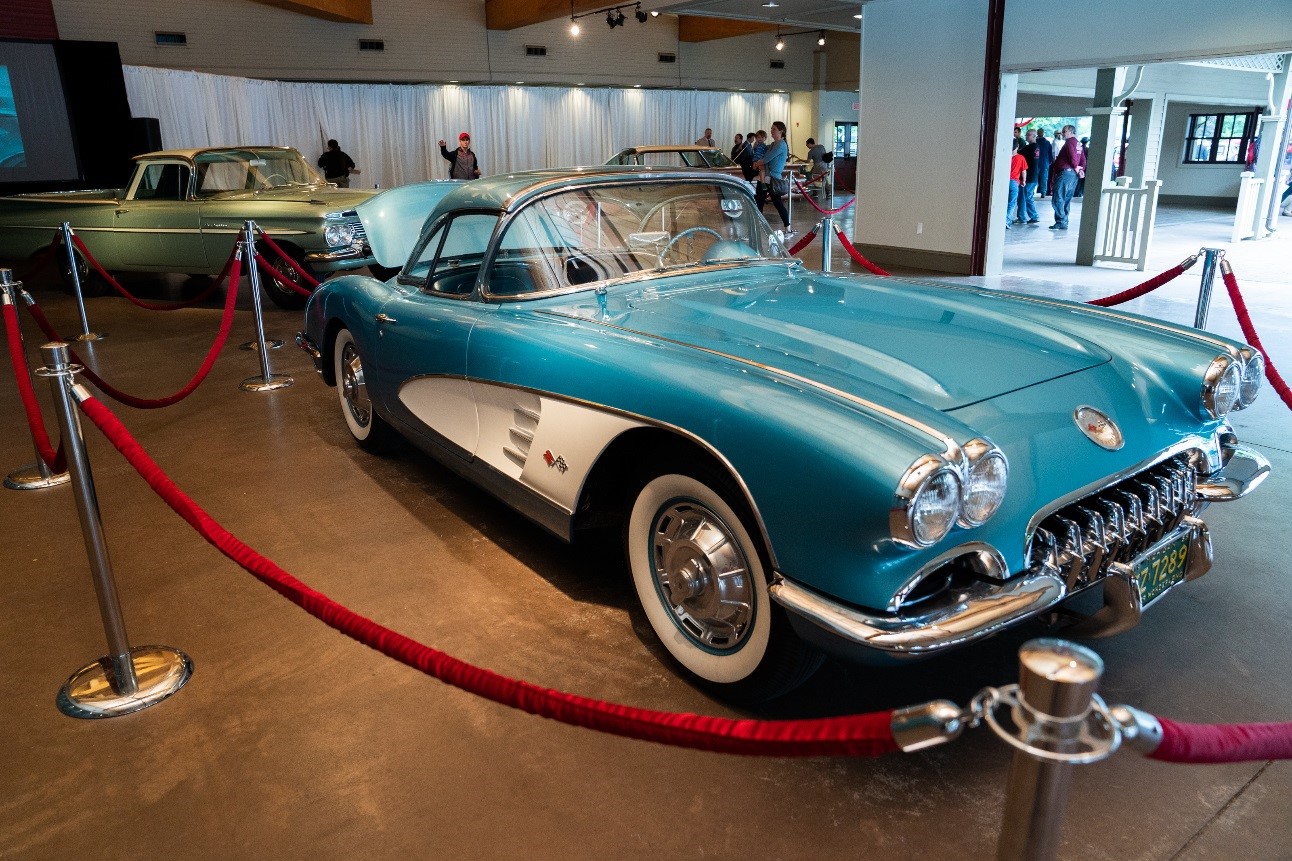 Perhaps the most immersive vignette this year was another set in the 1950s. For one weekend only, the Village Pavilion became home to Bill Fold’s Chevrolet, a period dealership showcasing Chevy’s new models for 1959. Entering the showroom, visitors encountered a classic family car in the form of an Impala, a tantalizing “new for ’59” model in the form of an El Camino (generously loaned to us from our friends at the GM Heritage Center), and a dreamy halo car in the form of a Corvette. The showroom was complete with a dedicated staff including a receptionist and two eager – make that too eager – salesmen. If those new cars were beyond your budget, Bill Fold’s also had a nice selection of “used” 1955, ’56, and ’57 models parked out front. 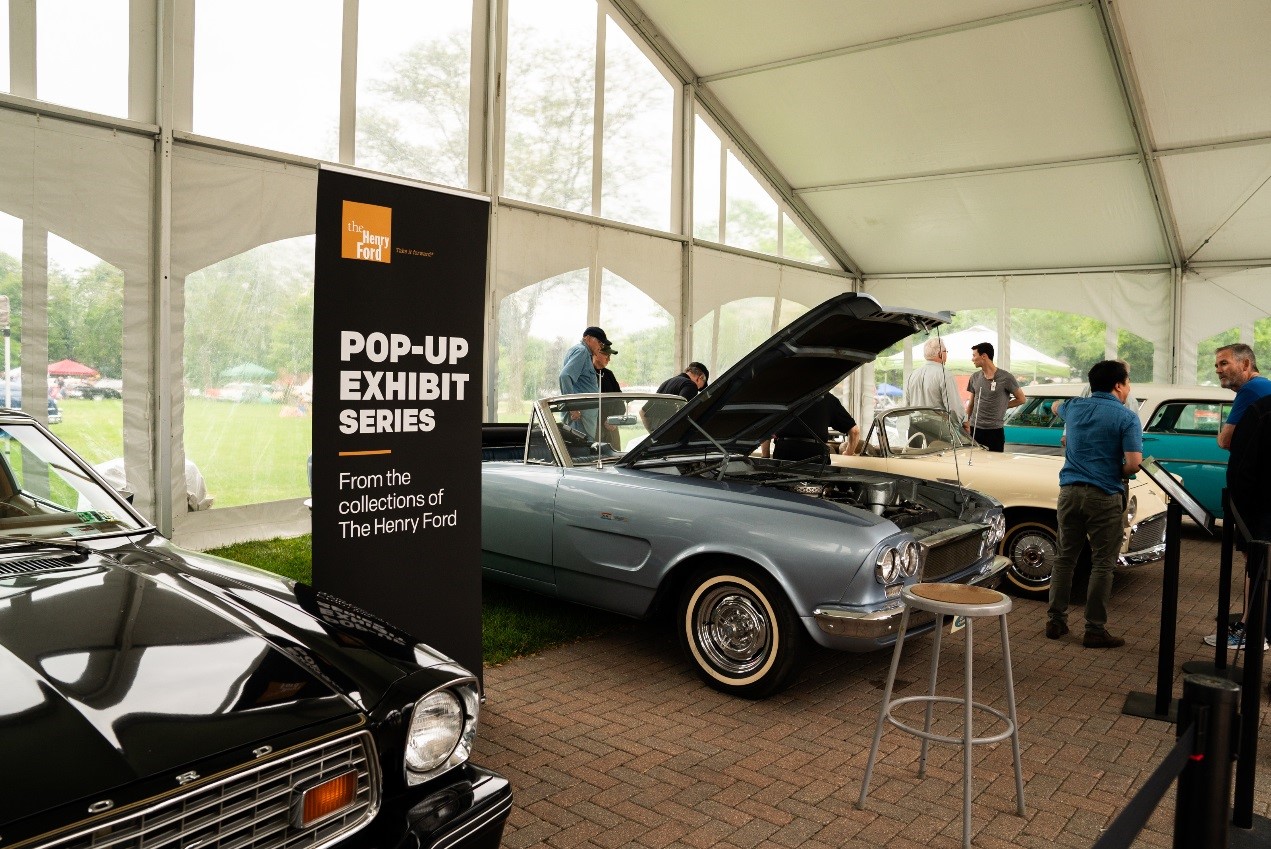 Visitors to The Henry Ford’s tent were treated to (left to right) a Ford Mustang II, a pair of one-of-a-kind Budd Company concept cars, and a 1957 Chevrolet Nomad wagon.

Every year, Motor Muster gives us a chance to display some treasures from The Henry Ford’s own automotive collection. This year we pulled out a pair of concept cars built by the Budd Company in the early 1960s. The XT-Bird was pitched by Budd to Ford Motor Company as a possible revival of the beloved two-seat Thunderbirds of 1955-57. (Though the XT-Bird has a back seat – barely.) Budd took the XR-400 to American Motors Corporation, hoping the company might bite on the idea of a sporty car built on a Rambler chassis. Both were intriguing ideas – each anticipating Ford’s Mustang – but neither went beyond these singular prototypes.

Given our Fabulous Fins theme, we had to have at least one pair of tailfins in our tent alongside the Budd cars. Our friends at the GM Heritage Center came through for us again with a beautiful 1957 Chevrolet Nomad. The sporty two-door station wagons weren’t popular enough to sell in big numbers at the time, but they’re certainly popular with collectors today. We also had one more little jewel from our collection on view, our 1977 Ford Mustang II. It’s one of those cars with no middle ground – you either love it or you don’t. The car received many wide-ranging reactions over the weekend. 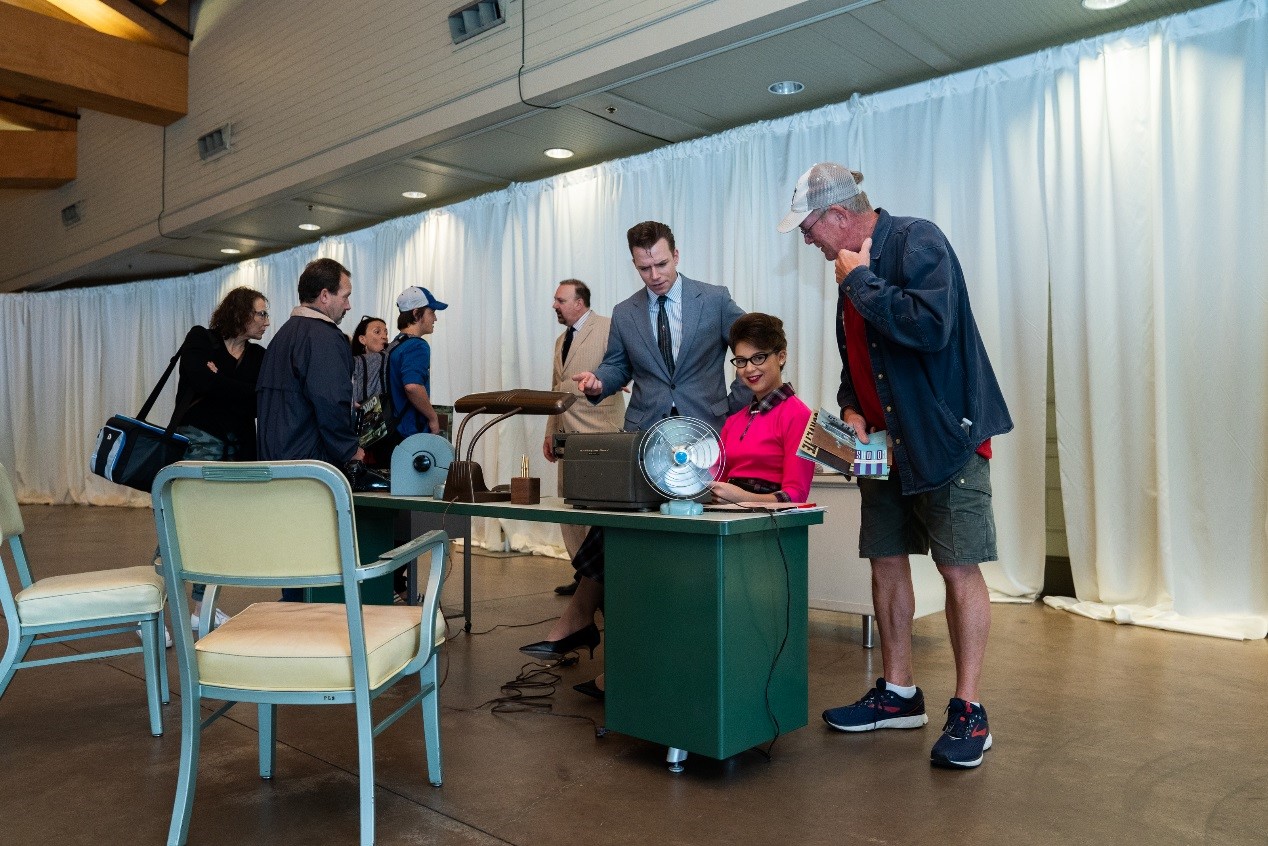 Another look inside Bill Fold’s Chevrolet, with its eager – and slightly smarmy – sales staff.

All in all, a fantastic Motor Muster for everyone who participated – whether they brought a vehicle or just brought themselves. We’ll look forward to seeing you at show number 31 next year.