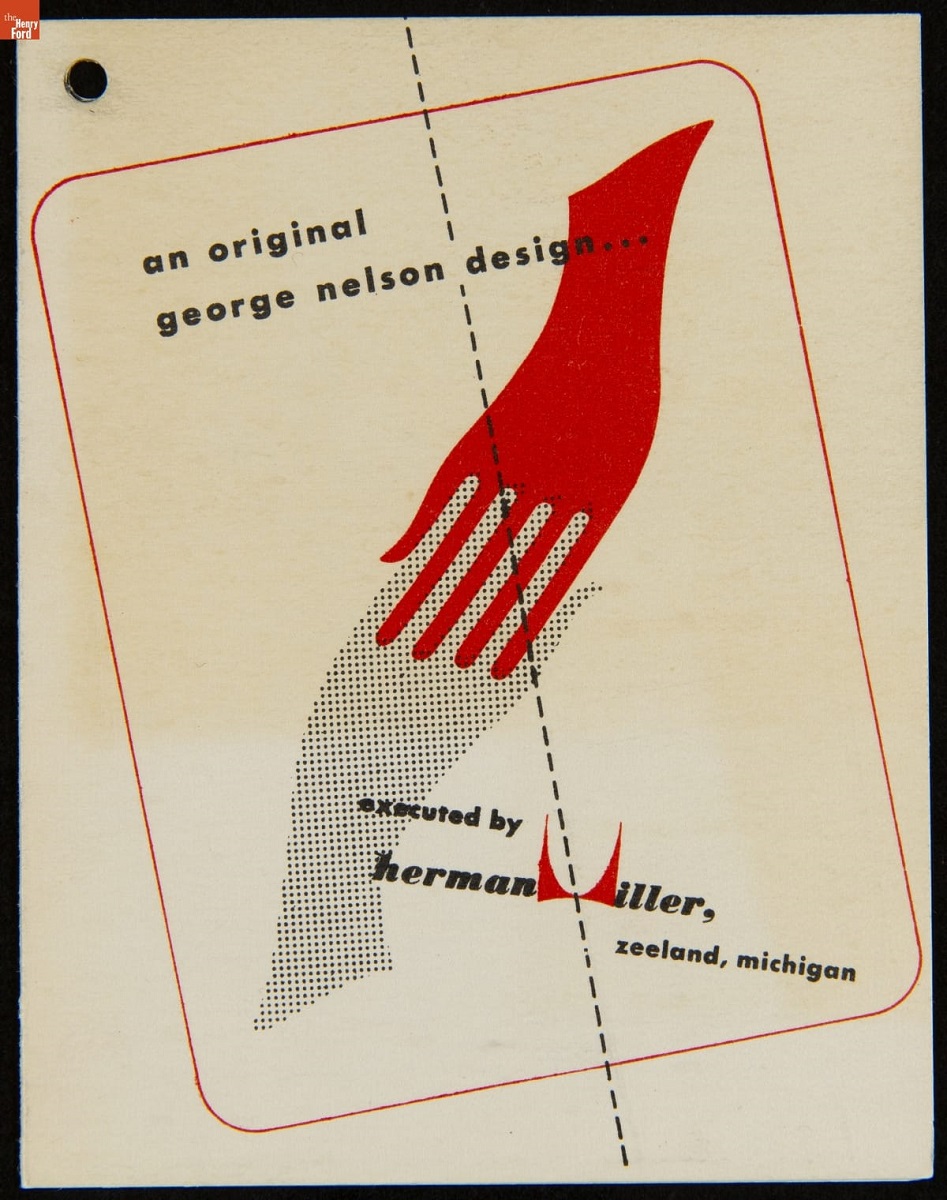 George Nelson is one of the giants of American Modern design. Often with such individuals, it is usually sufficient to point to their output—the architecture, products, graphics they designed—as a way to simplify and quantify their impact. While George Nelson’s output was undeniably significant, an accounting of his legacy in this way will always fall short. Nelson’s contributions to Modernism and the field of design are akin to his office’s famous Marshmallow Sofa—a study in how parts relate to the whole.

Born in 1908 to an affluent family in Connecticut, George Nelson was encouraged to cultivate his intellect from a young age. He attended Yale University—more so for its proximity to home and prestige in the eyes of his parents than due to his own desire—and quite literally happened upon the study of architecture by chance. He recalled ducking into the architecture building on Yale’s campus to avoid a sudden rainfall. Student renderings of cemetery gateways hung in the halls. Nelson “fell in love instantly with the whole business of creating designs for cemetery gateways” and decided, “without further question,” to become an architect. He graduated with his B.A. in 1928 and a B.F.A. in 1931. 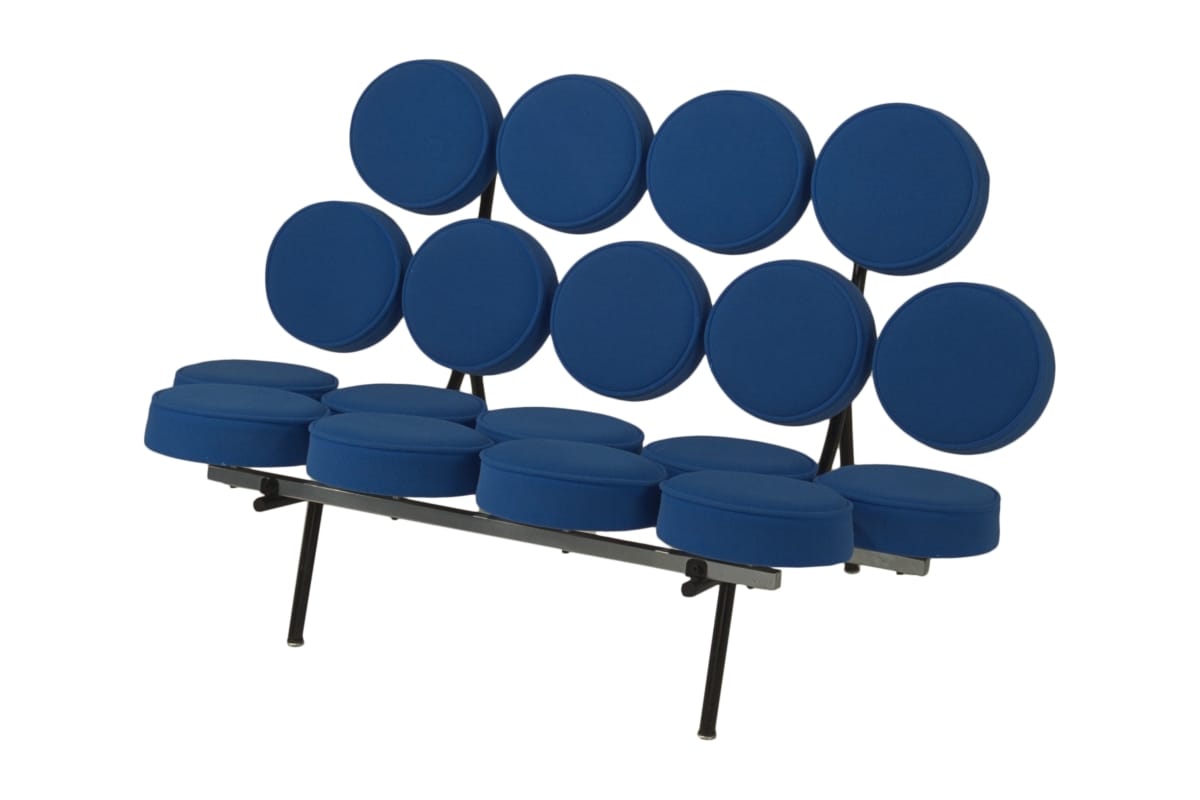 Nelson graduated with his new degree as the Great Depression tightened its grip on the United States. He was offered a teaching job at Yale, but was soon let go. He later considered this lucky, saying “…if you’re lucky, you are not allowed to stay safe. You’re thrown into jeopardy.” After a period of uncertainty in which he threw himself into applications for architectural fellowships in Europe, he was successful in winning the prestigious Rome Prize. This came with an all expenses paid, two-year architectural fellowship in Rome, which he took from 1932–1934.  Those years in Rome allowed Nelson to travel throughout Europe, study great architecture, and become acquainted with many of the leading figures in the budding Modernism movement.

Architectural criticism and theory writing became a continuous outlet for Nelson throughout his career, beginning in the early 1930s when he first published drawings and articles in Pencil Points and Architecture magazines. Upon his return to the United States, he took a position with The Architectural Forum in New York City and worked his way up to co-managing editor. Nelson’s career path didn’t continue in a linear fashion, but sprouted offshoots. Soon, he simultaneously continued his journalistic pursuits (and expanded to other publications), designed architectural commissions, and created exhibitions. The work was never about the output, but about the process and the solving of problems in whichever way a circumstance demanded. 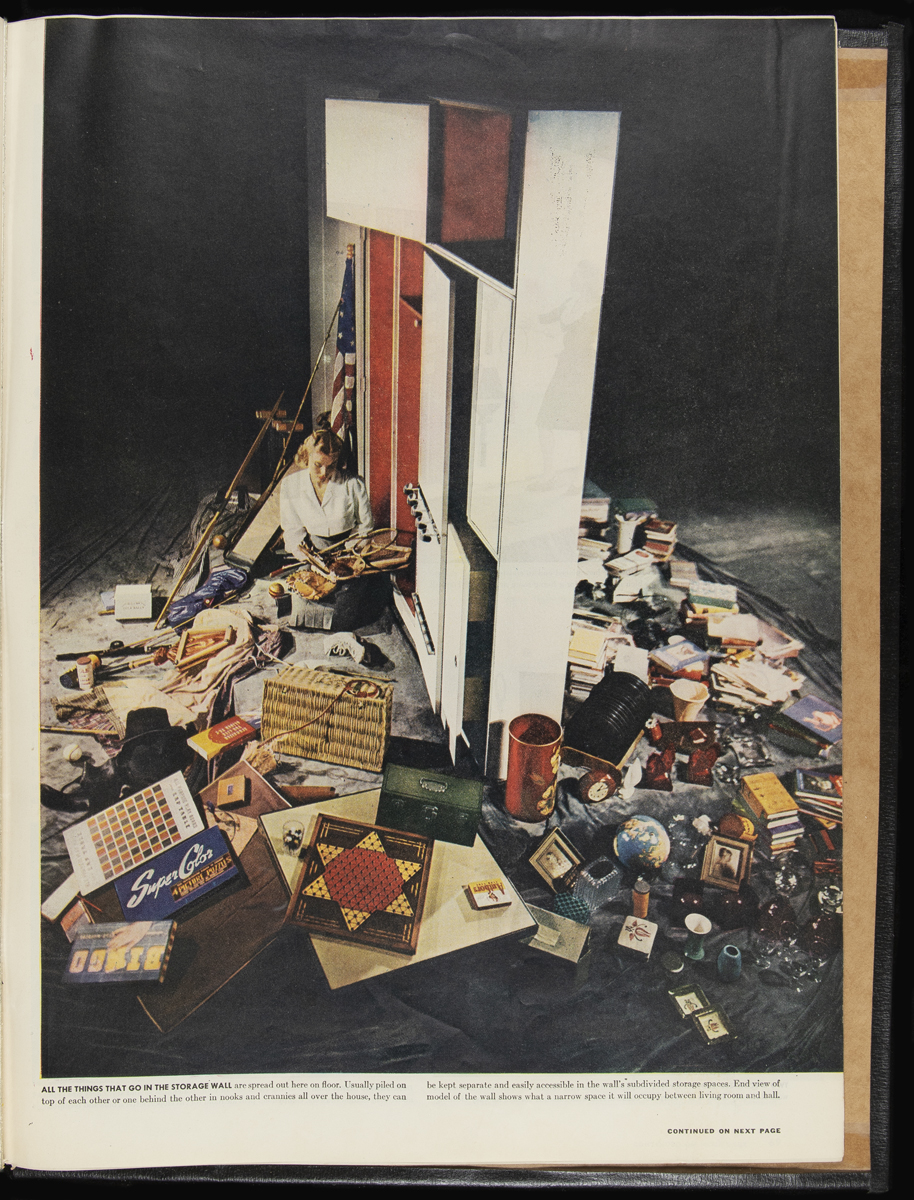 While writing a book on the house of the future titled Tomorrow’s House with Architectural Forum colleague Henry Wright, Nelson confronted the problem of household storage inadequacies, among other domestic matters. He explained his method in writing the book, “you will not find a chapter on bedrooms … but a great deal about sleeping.” His storage solution was a masterful rethinking of furniture and architecture in one. He recalled his “aha” moment: “My goodness, if you took those walls and pumped more air into them and they got thicker and thicker until maybe they were 12 inches thick, you would have hundreds and hundreds of running feet of storage.” Nelson’s innovative “storage wall” opened new doors for the furniture industry for years to come. His idea was featured in Architectural Forum in 1944 and then in a generous 1945 spread in Life magazine. It also attracted the attention of D.J. De Pree, the founder of the Herman Miller Furniture Company in Zeeland, Michigan. 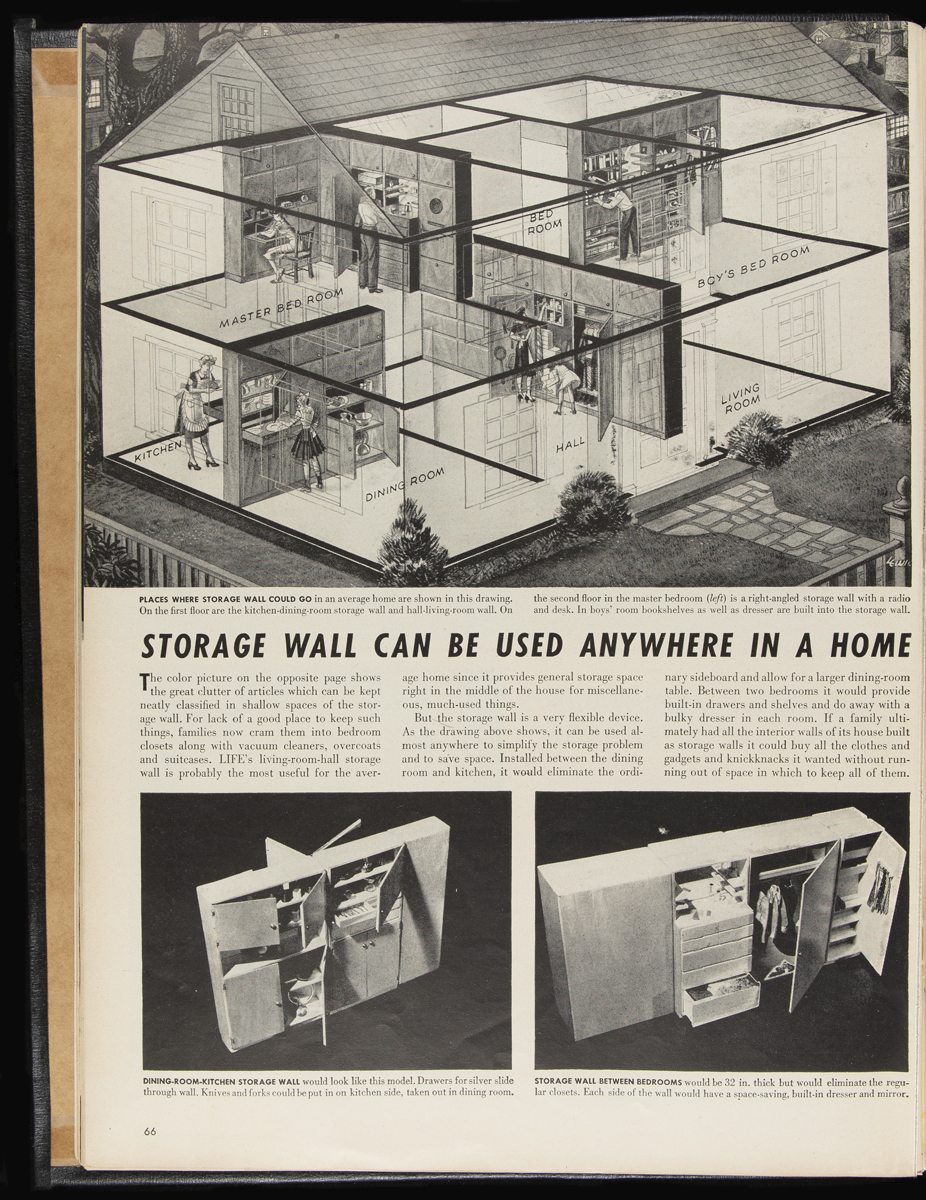 A Market for Good Design

After the untimely death of Gilbert Rohde, D.J. De Pree began to look for a new director of design. Rohde had successfully set the Herman Miller Furniture Company on the path of Modernism and De Pree was looking to continue that trajectory. Initially, De Pree considered German architect Erich Mendelsohn or industrial designer Russel Wright for the post, but eventually chose George Nelson, sensing a kindred spirit in a perhaps unlikely partnership. De Pree was devoutly religious and a teetotaler; Nelson, always accompanied by the lingering smell of cigarette smoke, questioned everything—especially religion—and loved martinis. Despite these differences, De Pree thought, rightfully, that Nelson was “thinking well ahead of the parade,” and hired him for the job. Like De Pree and Rohde, Nelson was completely invested in continuing Herman Miller’s focus on honesty and quality in Modern design. In the forward to a groundbreaking 1948 catalogue, Nelson outlined the company philosophy:

The attitude that governs Herman Miller’s behavior, as far as I can make out, is compounded of the following set of principles:

What you make is important….

Design is an integral part of the business….

The product must be honest….

You decide what you will make….

There is a market for good design. 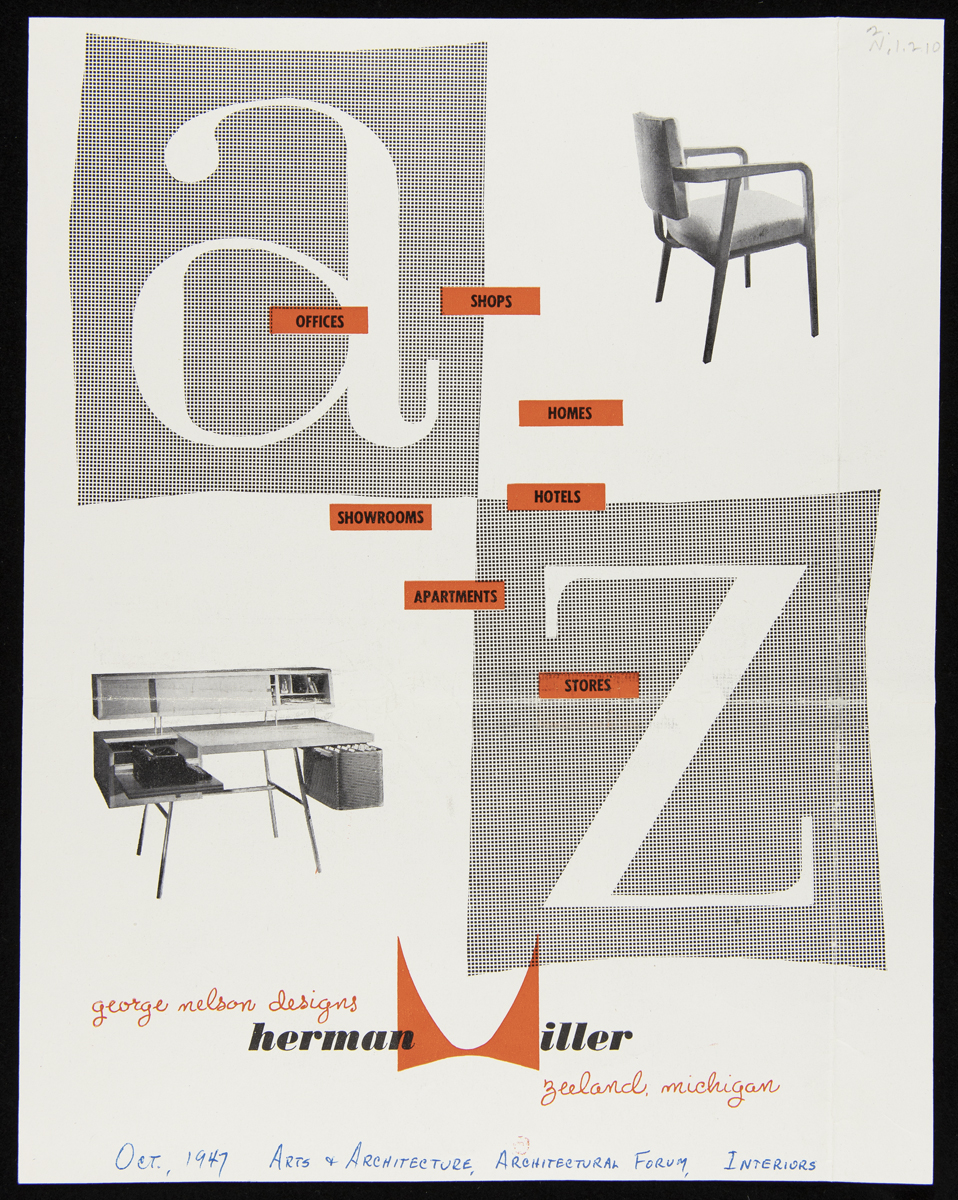 Herman Miller and George Nelson’s decades-long collaboration was fruitful almost immediately. Nelson rethought some of Gilbert Rohde’s furniture and issued lines of his own furniture design. He had proven himself a prescient thought leader in the design world through his writing, but became adept at finding talented people and bringing them together for the greater good of design. D.J. De Pree admitted surprise when Nelson requested to bring on other designers—even before his own contract was formalized. Instead of hoarding the glory (and potential income) for himself, Nelson saw the far-reaching benefits of collaboration with other visionary designers. It was Nelson who brought together the core design team that still shapes Herman Miller’s design today—most notably, Charles and Ray Eames, Isamu Noguchi, and Alexander Girard.

A tendency towards collaboration was not isolated to Nelson’s work at Herman Miller. In his personal life, he counted architect Minoru Yamasaki and architect and futurist Buckminster Fuller among his close friends. And those that he employed in his eponymous design office (which had many clients, although Herman Miller was certainly the largest account for many years) were the best of the best too. These staff designers—Irving Harper, Tomoko Miho, Lance Wyman, and Don Ervin, to name just a few—maintained the constant hum of the office. They diligently continued to ideate, design, and make for the office’s clients. Sometimes they executed their own concepts, and other times the staff designers brought their metaphorical and literal pens to paper for some of Nelson’s lofty visions.

Nelson has faced fair criticism of taking more credit than was due for some of the designs that came from his office. He positioned himself as a powerful brand—and many of those who worked under him gained valuable experience, but perhaps never the full realization of their efforts in the public sphere. 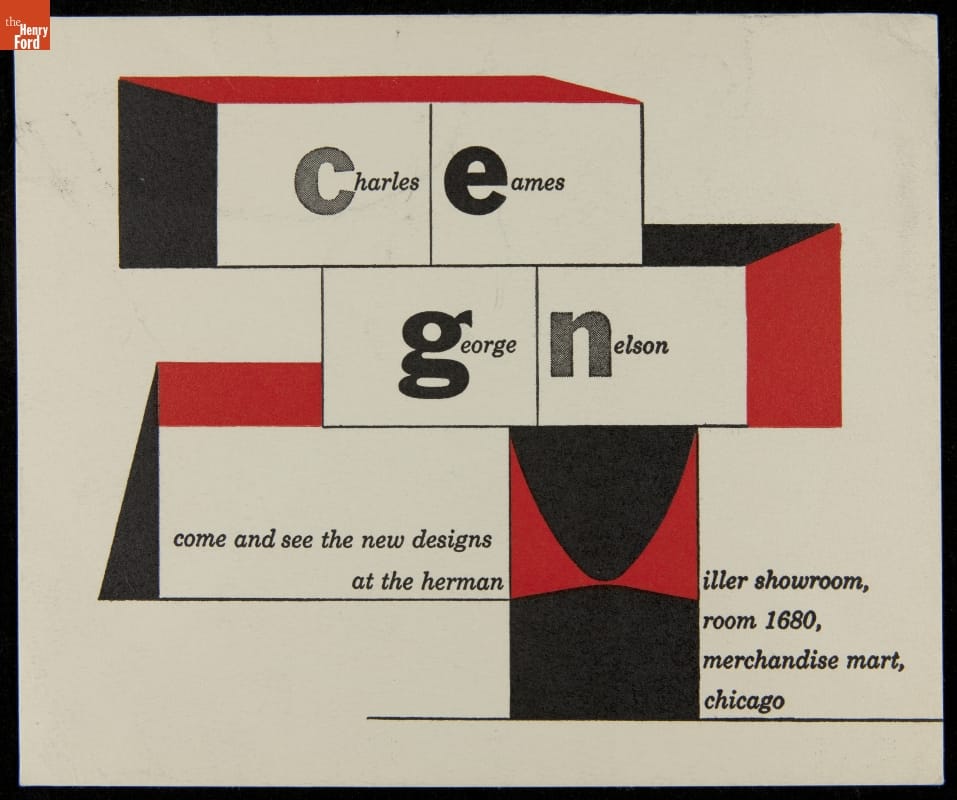 George Nelson actively designed for Herman Miller until the early 1970s and continued designing products, exhibits, interiors, graphics, and more with his own firm until 1984. He lectured and wrote on design theory and practice until his death in 1986, influencing and inspiring generations of designers. George Nelson’s contributions to design are much greater than his output—the products, writings, structures, and graphics he produced. He may have been more concerned with principles and processes than about the tangible result—but his loftier focus is what made his tangible designs so effective. Nelson’s ideas and ideals shaped the Modernist design movement and his influence can still be felt, reverberating through the halls of design offices and school halls alike.