Lyn St. James: Inspiring and Supporting the Next Generation 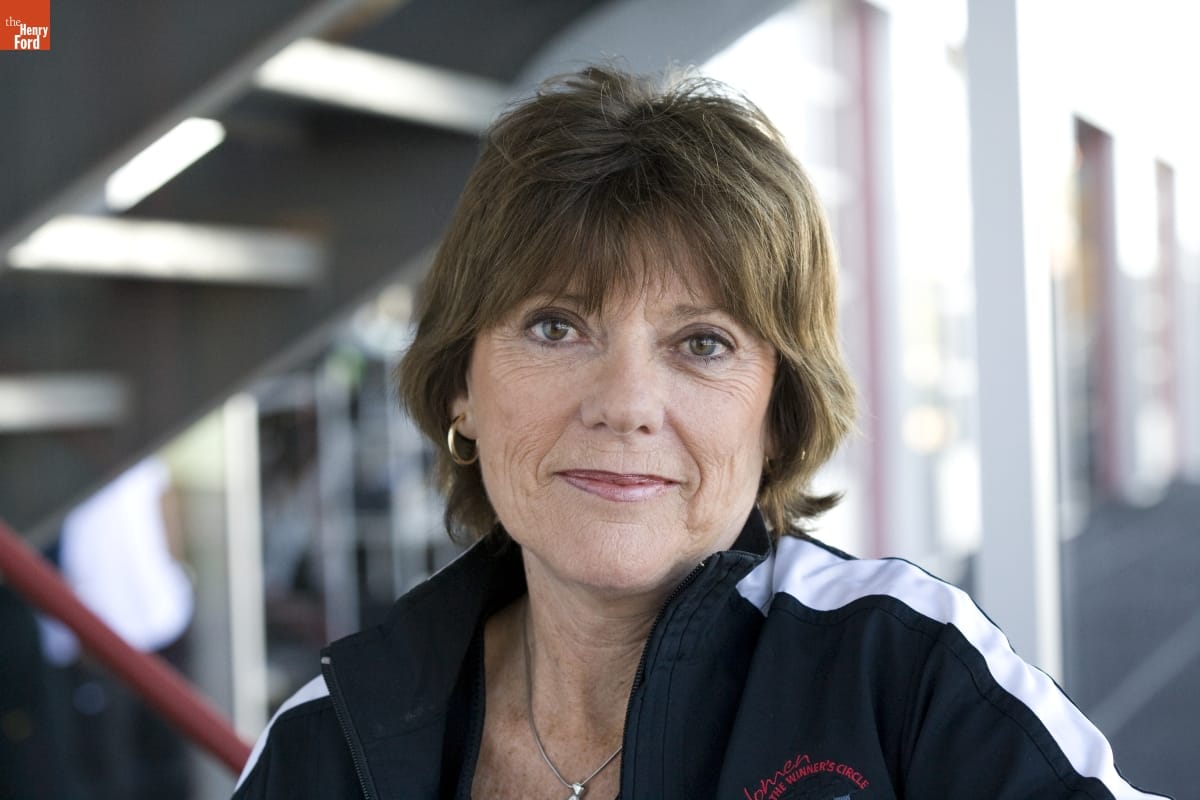 Lyn St. James was watching from afar when Janet Guthrie was trying to break into Indy car and stock car racing. At the time, St. James was a part-time competitor chasing a Sports Car Club of America road-racing national championship in a Ford Pinto.

“I was excited and pumped about my racing, and I watched her on the television and thought, ‘God, she’s struggling and nobody wants her there,’” St. James recalled. “She didn’t smile very much, and it made me say, ‘Why would I want to do that? Why would I want to put myself in that kind of situation when I was having so much fun?’” 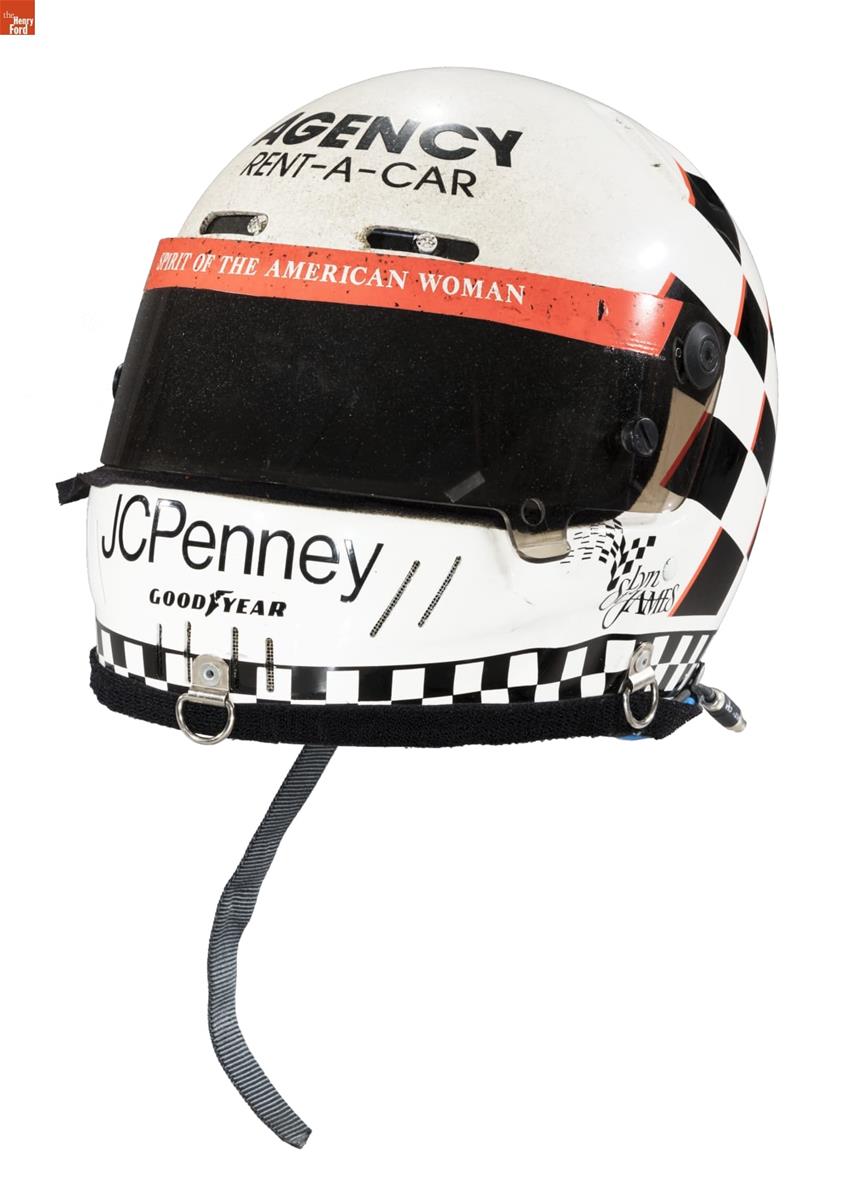 This racing helmet worn by Lyn St. James is going on display in Driven to Win: Racing in America. / THF176437

In the early 1980s, Kelly Services sponsored the International Motor Sports Association (IMSA) American Challenge championship and paid bonuses to female drivers. St. James parlayed an opportunity in that series, along with a chance encounter with legendary Ford executive Walter Hayes, into a highly successful relationship with Ford that produced six wins in IMSA competitions, including class victories at Daytona and Sebring, prior to shifting her focus to Indy cars. She is also the only woman to win an IMSA GT race driving solo. 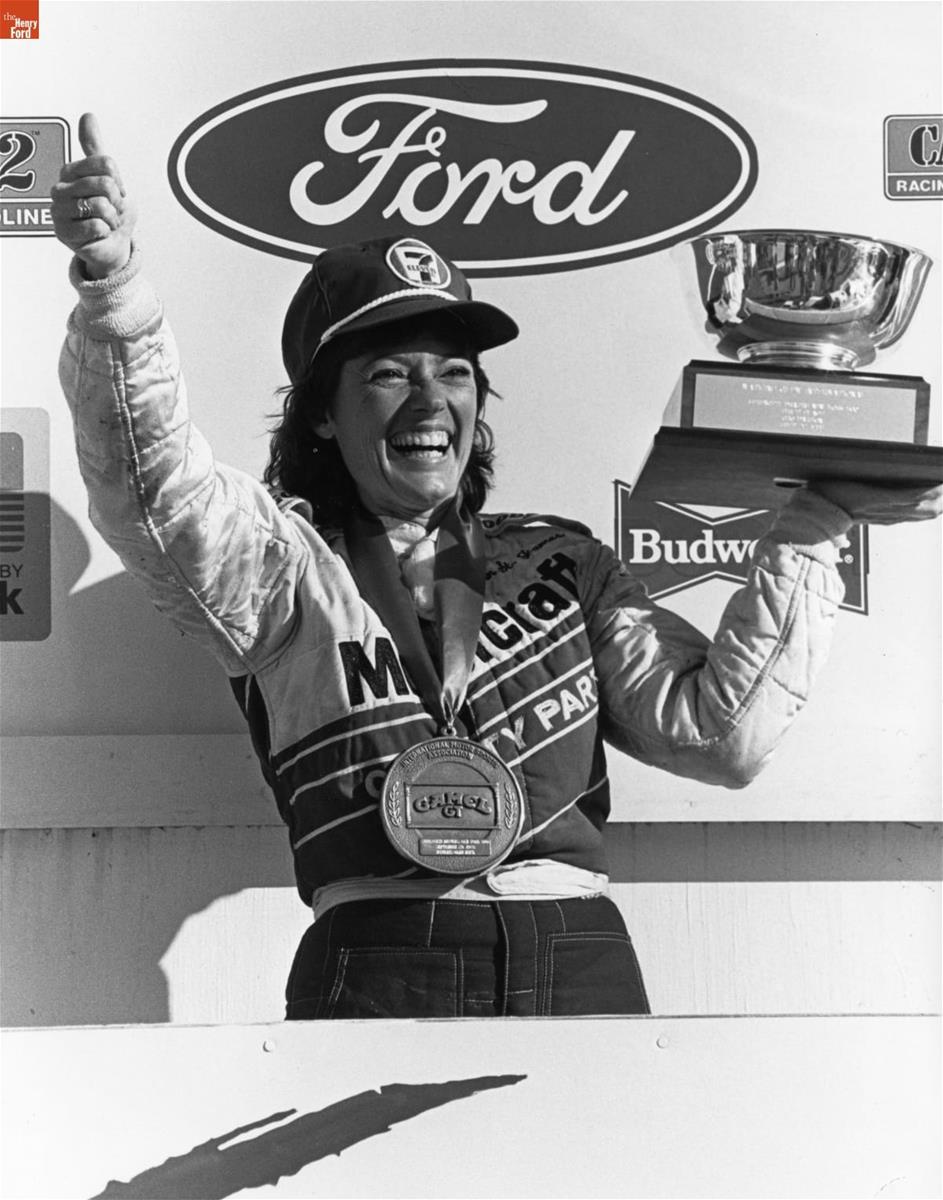 “I wanted to test-drive one, just to experience the peak of race car performance,” she said. “I was just in heaven. I had set speed records in a stock car at Talladega, and in comparison, it felt numb. Dick Simon [IndyCar team owner] was very supportive, and that was a turning point. I wrote to 150 companies over four years seeking support. J.C. Penney was the 151st, but the first one that said yes.”

Finally, in 1992, St. James became the first woman to qualify for the Indianapolis 500 since Guthrie last had, 15 years earlier. St. James finished 11th in the race, claiming Rookie of the Year honors (the first woman to do so). In 1994, she out-qualified reigning Indy car champion Nigel Mansell at Indy; she made a total of seven Indianapolis starts, with her last in 2000. She has been inducted into the Sports Car Club of America and the Florida Sports halls of fame, and held 21 international and national closed-circuit speed records over a 20-year period. 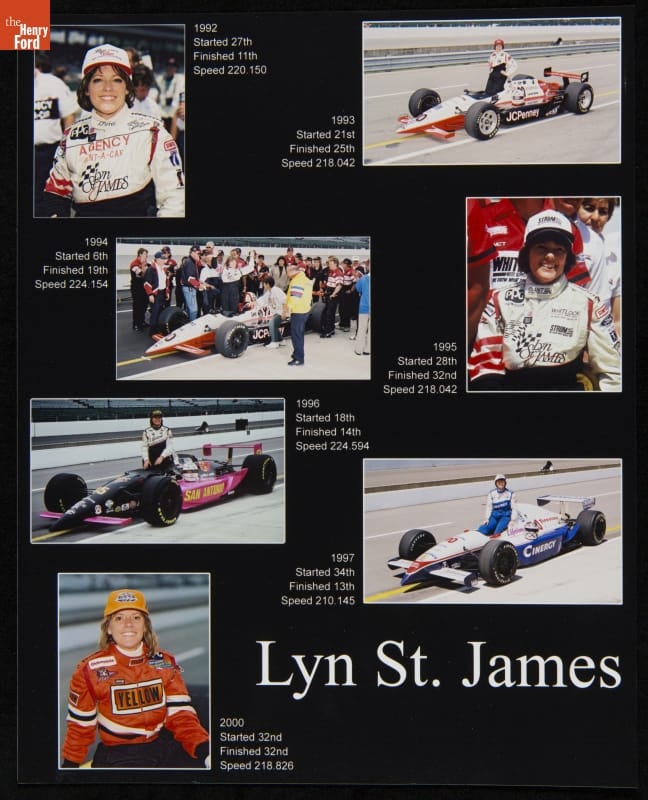 St. James still occasionally competes in vintage races, and in addition is a speaker, author, philanthropist, and coach, but spends most of her time mentoring female drivers. Her foundation’s driver development program has graduated more than 230 participants over the last 25 years, including then-future Indy car drivers Sarah Fisher and Danica Patrick. 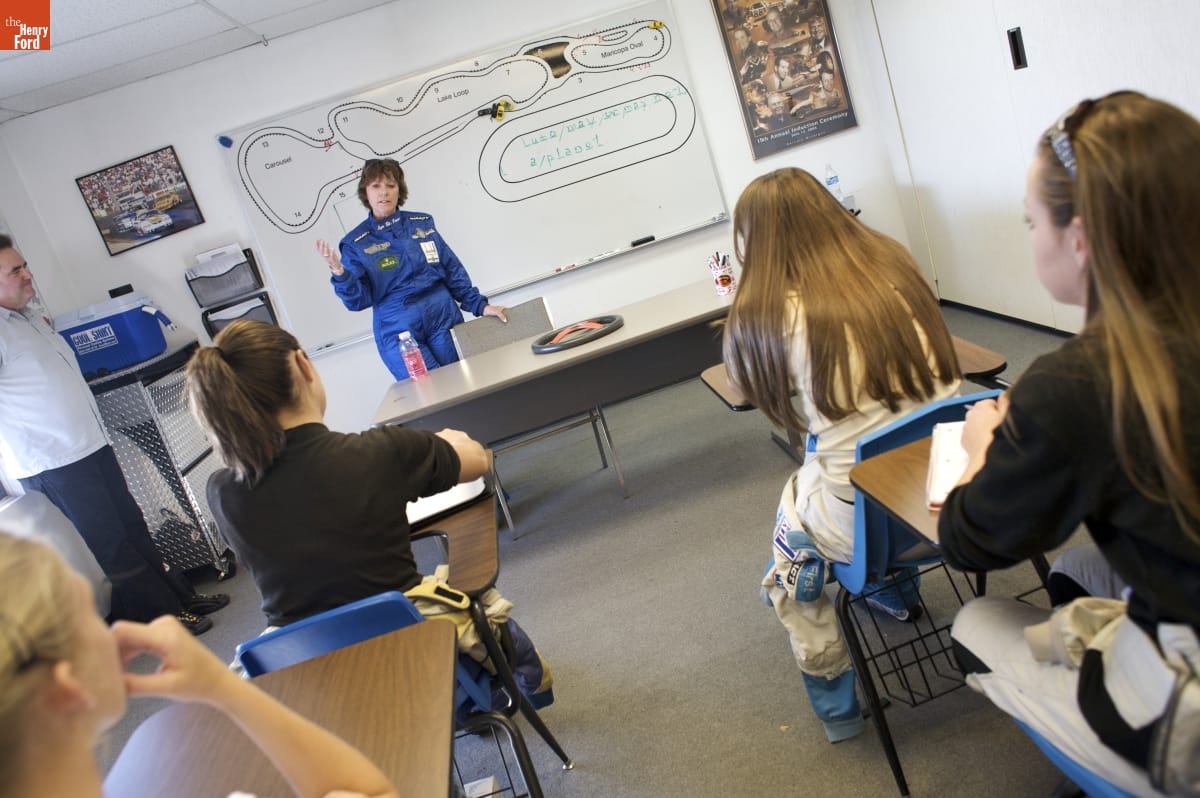 Lyn St. James at her Complete Driver Academy, which provided a comprehensive education and training program for talented women race car drivers who aspired to attain the highest levels in motorsports, in Phoenix, Arizona in 2008 (photograph by Michelle Andonian). / THF58682

“It’s sad that leaders in motorsports have not figured out that the car levels the playing field for everyone,” St. James said. “The leaders have missed an opportunity to show how female involvement in racing really represents society. Women can perform and compete on an equal level.”

Involvement with The Henry Ford and

In 2008, a small crew from The Henry Ford traveled to Phoenix, Arizona, to visit a race car driver academy for women. The institution, called Complete Driver Academy, was established by Lyn St. James in 1994 to help identify potential champion female drivers and provide the tools they needed to further their careers. The Henry Ford interviewed St. James there as part of its Visionaries on Innovation collection of video interviews, which also features other racing legends such as Mario Andretti. 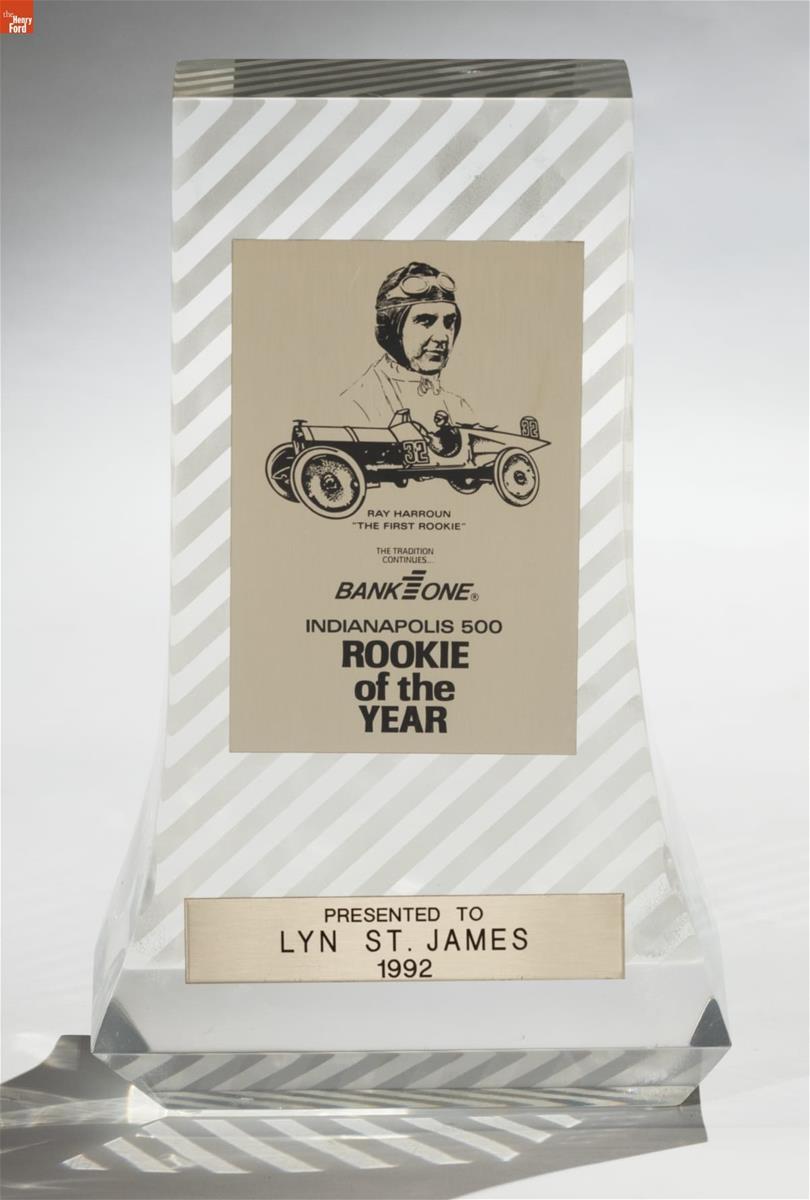 In addition to documenting St. James’ oral history, The Henry Ford has many artifacts from her racing career in its collections—some of which will be on display in the new Driven to Win: Racing in America permanent exhibition in Henry Ford Museum of American Innovation, where St. James is a showcased driver. “Lyn has been an adviser to the exhibit going back more than ten years,” said Curator of Transportation Matt Anderson. “From the start, she has offered her help and advice, including connecting us with innovators like motorsports training expert Jim Leo of PitFit Training in Indiana.”

Among the racing-related artifacts from St. James that will be on display in Driven to Win: her helmet, driving suit, HANS (head and neck support) device, and Rookie of the Year trophy from the 1992 Indy 500, where she became the first woman to win that title. You can also explore many more artifacts related to St. James’ career in our Digital Collections.