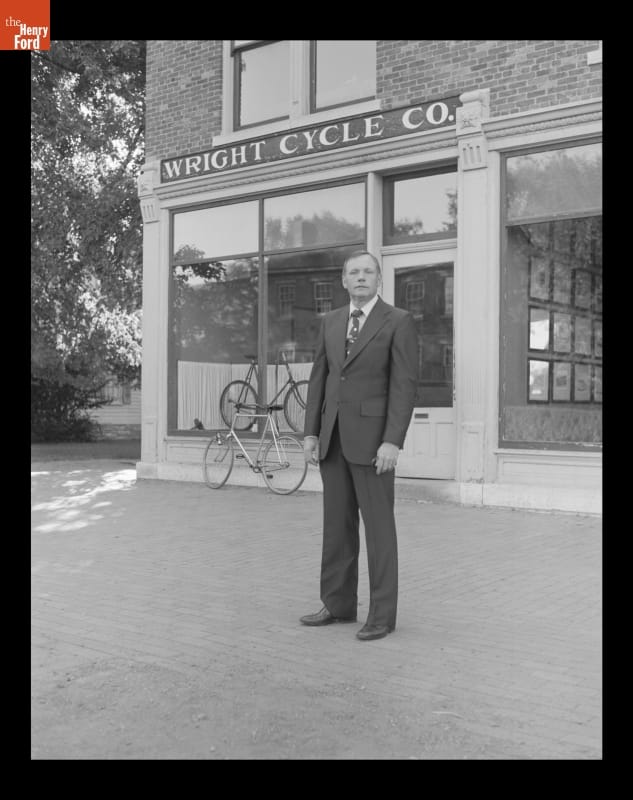 Watching the moon landing on TV on July 20, 1969, was a defining moment for most baby boomers. I know it was for me. My brothers and I were glued to the TV set for hours, hanging on to every word uttered by broadcast journalist Walter Cronkite, waiting for the exciting moment that the Lunar Module Eagle would land on the moon and its crew members would take their first steps into uncharted territory. 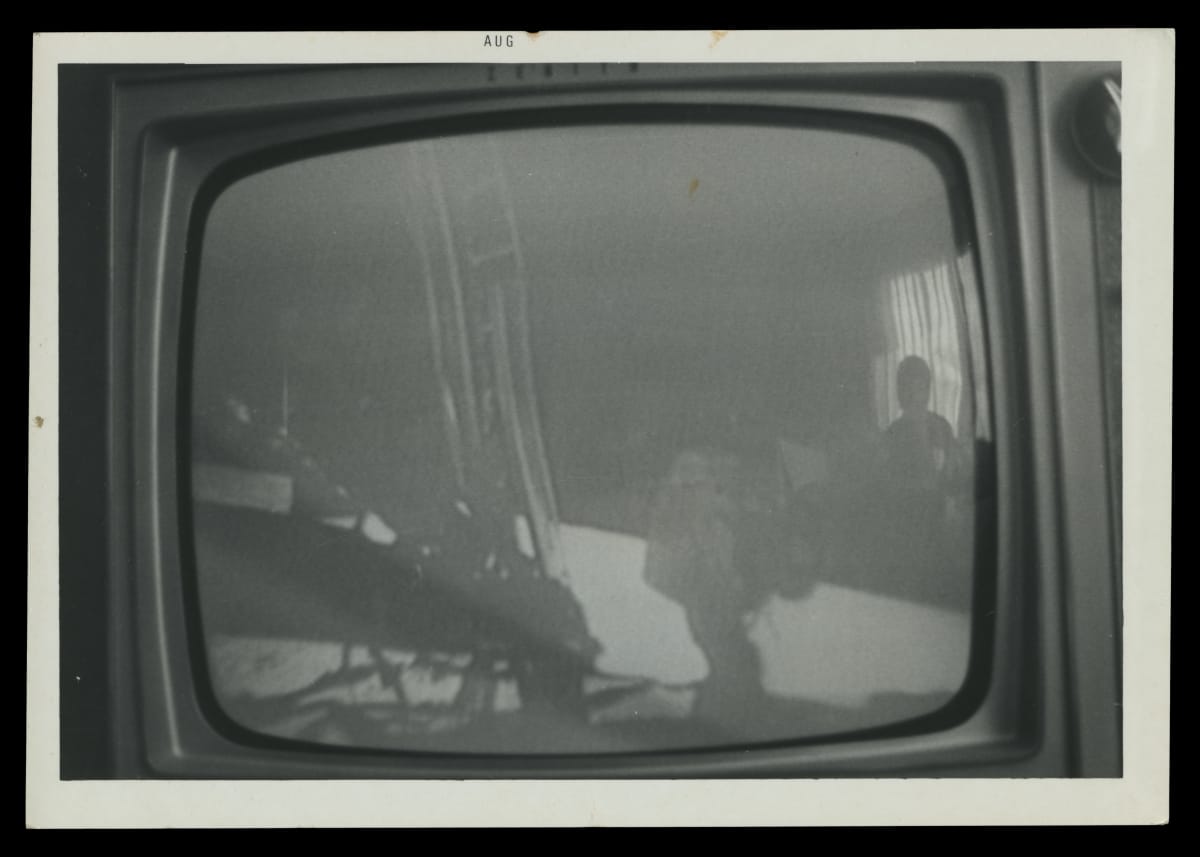 Three Apollo 11 crew members—Neil Armstrong, Edwin “Buzz” Aldrin, Jr., and Michael Collins—embarked on this mission on July 16 and returned safely to earth on July 24. In between, each crew member contributed his utmost to the tasks at hand. But one name eternally sticks out—Neil Armstrong, the mission’s commander. As commander, he accepted his role as spokesperson for the crew and the mission. And, as commander, he became the first man to step on the moon, voicing the now-immortal words, “That’s one small step for [a] man, one giant leap for mankind.” After that time, he relentlessly shunned the limelight and hated being singled out. When Armstrong passed away in 2012, his family released a statement that reinforced these sentiments: “Neil Armstrong was a reluctant American hero who always believed he was just doing his job.” Yet, like it or not, he was—and will forever be—singled out as the “first man.” 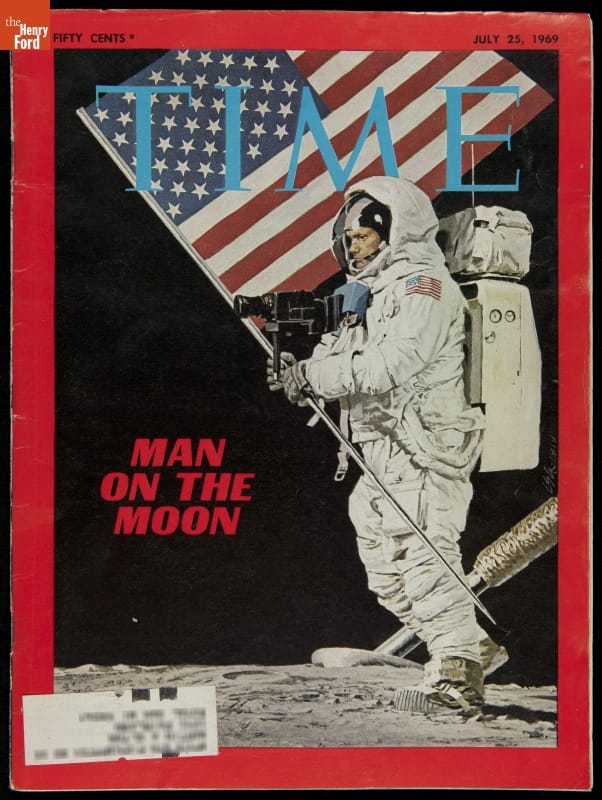 Artist Louis Glanzman captured the spirit of the momentous occasion for the July 25, 1969, cover of Time magazine, despite having no real photographs to reference (none were available yet and, in fact, no photographs of Neil Armstrong were ever taken on the moon). It became one of Time’s most popular covers ever. / THF230050

Neil Armstrong was from Ohio—as I am. I have always been proud of that connection. In the 1990s and early 2000s, when my daughter was young and we would often drive down I-75 to visit family members in Dayton, we would stop at the Armstrong Air & Space Museum (founded in 1972)—located right at the freeway exit for Armstrong’s hometown of Wapakoneta. There we would enjoy viewing personal artifacts of his, reliving the story of the Apollo 11 mission, and reacquainting ourselves with the timeline of all the missions leading up to and following that one.

So, when the opportunity arose to write a blog post about Neil Armstrong, I enthusiastically volunteered. I figured I would enjoy reading up on him again. This time around, however, I particularly looked for insights into what made him that reluctant hero.

Armstrong was born in a farmhouse about six miles from the small town of Wapakoneta, Ohio, on August 5, 1930. He didn’t actually live in Wapakoneta until he was 14 years old. Because his father was an auditor for the state of Ohio, his family often moved around—in fact 16 times before they finally settled in Wapakoneta! Other small Ohio towns—like Upper Sandusky and St. Marys—were just as influential in shaping his character. As a boy, he was considered calm, serious, determined, and always on task. 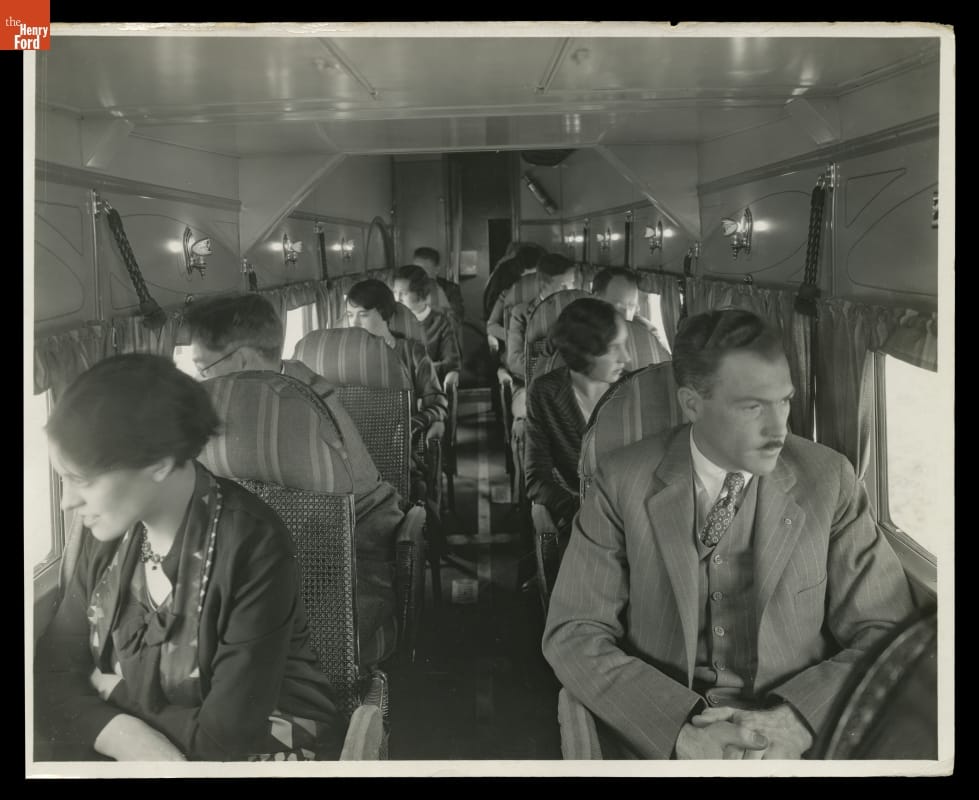 Being an astronaut was not Neil Armstrong’s great ambition in life. He wanted to fly airplanes, and wistfully envied earlier pilots like Charles Lindbergh and Amelia Earhart with their record-setting flights. When he was only six years old, he thoroughly enjoyed the ride he took on a Ford Trimotor (his father was downright terrified). (For more on Trimotors, see this expert set.) A few years later, he began building and flying model airplanes; in fact, he filled his bedroom with them. He read countless books and magazines about airplanes. He also worked various jobs to earn money to take flying lessons. At only 15, he earned his pilot’s license and made his first solo flight soon after.

Neil Armstrong was different from many other airplane pilots and, later, astronauts in that he was not only interested in flying, but also in learning how planes were built and how to make them more efficient, faster, better. So, he decided to study aeronautical engineering, attending Purdue University on a Navy scholarship.

Armstrong’s college years were interrupted by his being sent to fight in the Korean War. He was assigned to Fighter Squadron 51, flying small jets off an aircraft carrier to bomb enemy bridges and railroads and to scout areas where other planes would attack later. After college, Armstrong flew high-speed, high-altitude experimental airplanes at Edwards Air Force Base in the Mojave Desert, California—not because he loved speed (as many other test pilots did), but because he wanted to use planes as tools to gather information and solve problems.

Armstrong loved this work, but in 1962 he switched gears and applied to become an astronaut. Some say this was because of his need to make a dramatic lifestyle change after the tragic death of his two-year-old daughter. But he himself claimed, “I decided that if I wanted to get out of the atmospheric fringes and into deep space work, that was the way to go.”

Either way, before long, Armstrong was chosen to become one of the so-called “New Nine”—that is, the second group of men (women were not allowed to become astronauts until 1978) that NASA picked to fly missions to outer space. (For more on the initial Mercury Seven astronauts, see this blog post.) 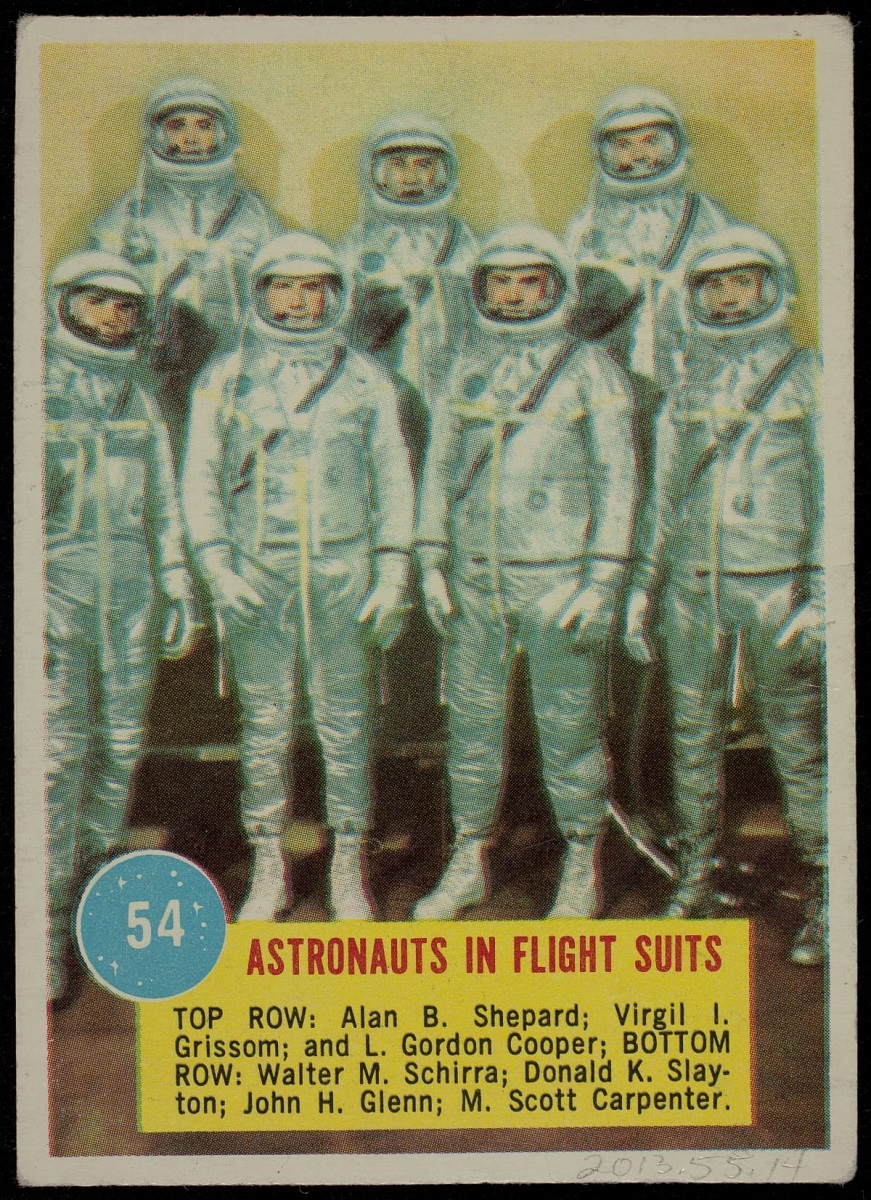 Before the “New Nine,” there were the Mercury Seven, the first seven astronauts chosen by NASA to attempt to place a man in space through a program known as Mercury. Here they are posing in their space suits for this circa 1963 trading card. / THF230119

That was seven full years before Armstrong became a household name with the Apollo 11 mission. What did he do during all that time? In fact, a great deal needed to be figured out and perfected if there was to be any hope of meeting President John F. Kennedy’s vision to land a man on the moon before the end of the decade. Armstrong spent much of his time practicing, training, and undertaking the many tasks that prepared him and others to fly to outer space and attempt a moon landing. During these years, Armstrong also willingly talked to members of the media, not only because they never seemed satisfied with NASA’s updates, but also to help allay negative public opinion about the government’s focus on the space program when so many domestic issues seemed more pressing. 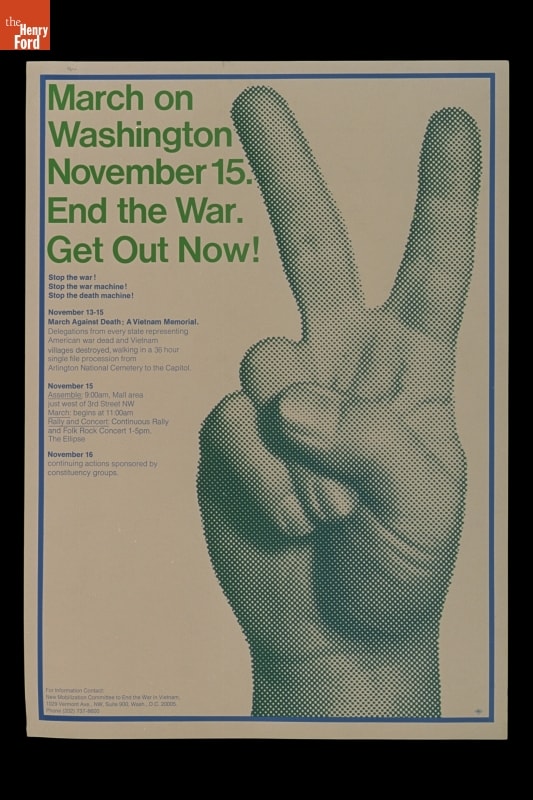 Many people felt that such pressing issues as poverty, Civil Rights, and the war in Vietnam (as reflected by this 1968 protest poster) should take precedence over the space program. / THF110904

Meanwhile, Armstrong patiently waited his turn—like the other astronauts—to participate in a real mission to outer space. He finally got that turn in March 1966, when he was assigned to command NASA’s 14th crewed space mission, Gemini 8—with the goal to “dock” or connect with another satellite already in space. In 1968, he was also named the backup commander for the Apollo 8 lunar orbit mission (but did not go on that mission).

During that time, Armstrong repeatedly practiced with the Lunar Landing Training Vehicle (LLTV)—the prototype module for landing men on the moon. The LLTV was an ungainly, unstable wingless aircraft, powered by a turbofan engine, which took off and landed vertically. It was highly experimental and extremely dangerous. As Buzz Aldrin later remarked, “…to train on it properly, an astronaut had to fly at altitudes of up to five hundred feet. At that height, a glitch could be fatal.”

Armstrong faced constant risks and dangers in his career as an airplane pilot and then as an astronaut—including flying 78 missions in the Korean War; piloting the world’s fastest, riskiest, most experimental aircraft; and encountering close calls while commanding Gemini 8 and while practicing on the LLTV. But he never panicked. He concentrated on the tasks and remained cool under pressure. His mind was always focused on analyzing and solving the problems, then on moving forward.

And that is exactly why he was chosen to command Apollo 11—the space mission that would finally attempt a landing on the moon. As Chris Kraft, NASA’s director of flight operations at the time, explained, “Neil was Neil. Calm, quiet, and absolute confidence. We all knew that he was the Lindbergh type. He had no ego. He was not of a mind that, ‘Hey, I’m going to be the first man on the Moon!’ That was never what Neil had in his head."

Neil Armstrong brought to the Apollo 11 mission all of his training, practice, and knowledge. His ability to keep calm under pressure particularly came in handy when he and Aldrin landed the Apollo’s Lunar Module Eagle onto the moon’s surface with only 20 seconds of fuel remaining.

Which brings us back to the moment when I—along with about 500 million other people—sat on the edge of my seat and watched on TV as the Eagle landed, and, several hours later, as the Eagle’s hatch opened, as Neil Armstrong wriggled out and began to descend the ladder toward the moon’s surface, and as he took his first step on the moon. 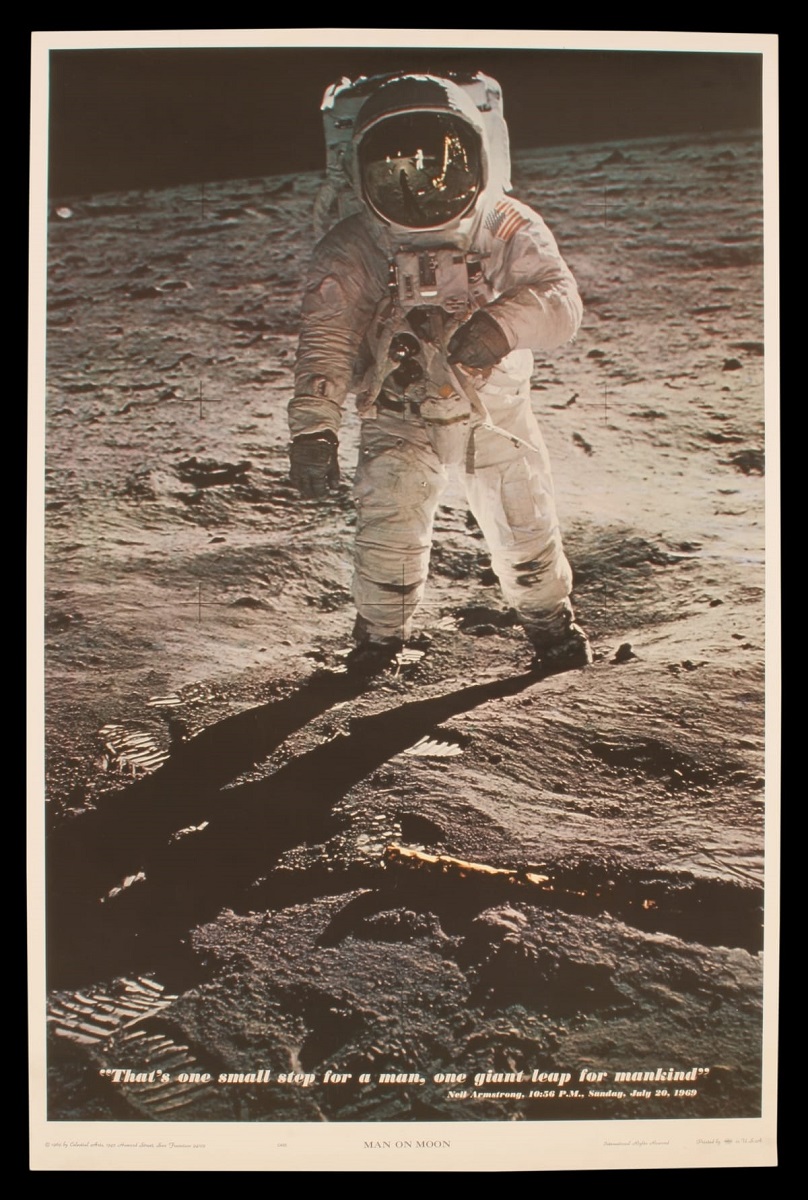 Neil Armstrong took this famous photograph of Edwin “Buzz” Aldrin on the moon. His own reflection can be seen in Aldrin’s helmet. / THF56899

The moon landing was considered a success. Americans were ebullient as they celebrated the Apollo 11 astronauts’ achievements, with only months to spare before the decade ran out. The three Apollo 11 crew members were honored and celebrated for months afterward. 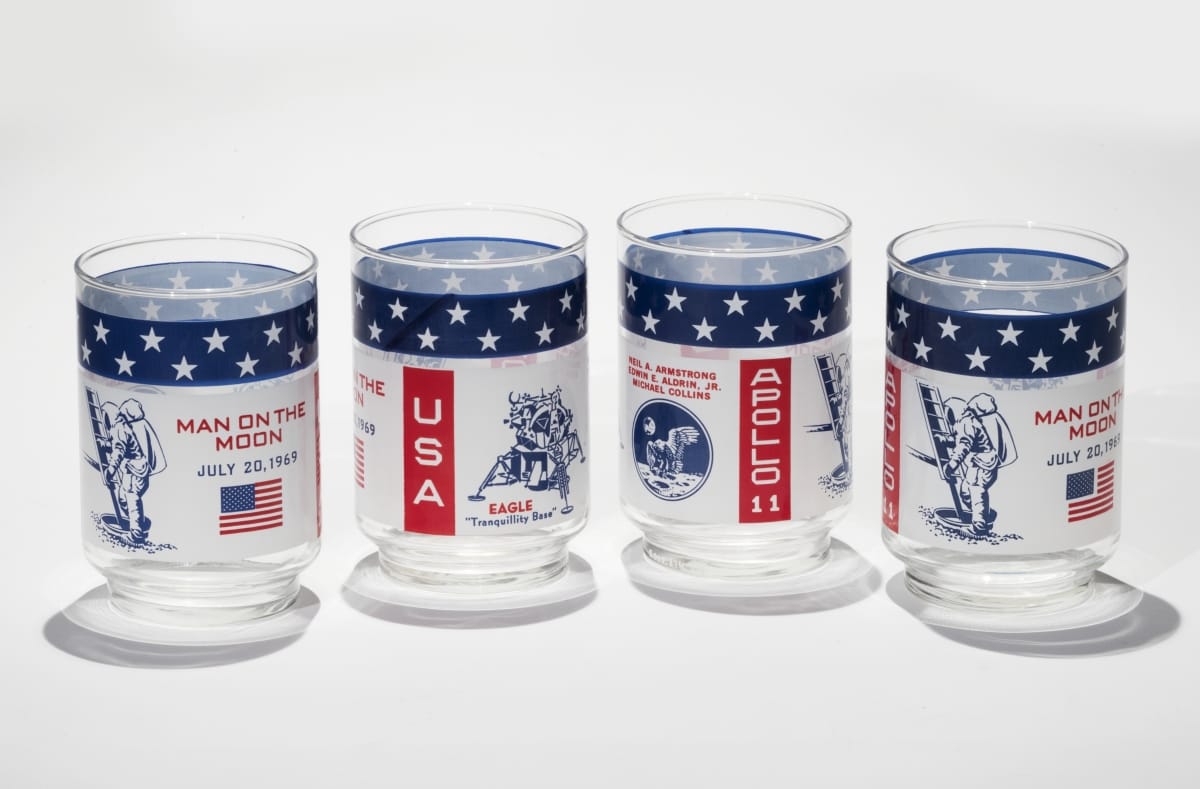 This set of tumblers, commemorating the Apollo 11 space mission, depicts such iconic images as the Lunar Module Eagle and Neil Armstrong’s first step on the moon. / THF175132

But most of the adulation, it seemed, was directed at Neil Armstrong. He even received the Medal of Freedom, the highest award the U.S. government bestows on a civilian. But he never liked the attention. He felt he did not deserve the fame and always attributed the success of the mission to the entire team of people who had made the dream of reaching the moon possible. Ever modest, he once tried to argue, “I was just chosen to command the flight. Circumstance put me in that particular role.” 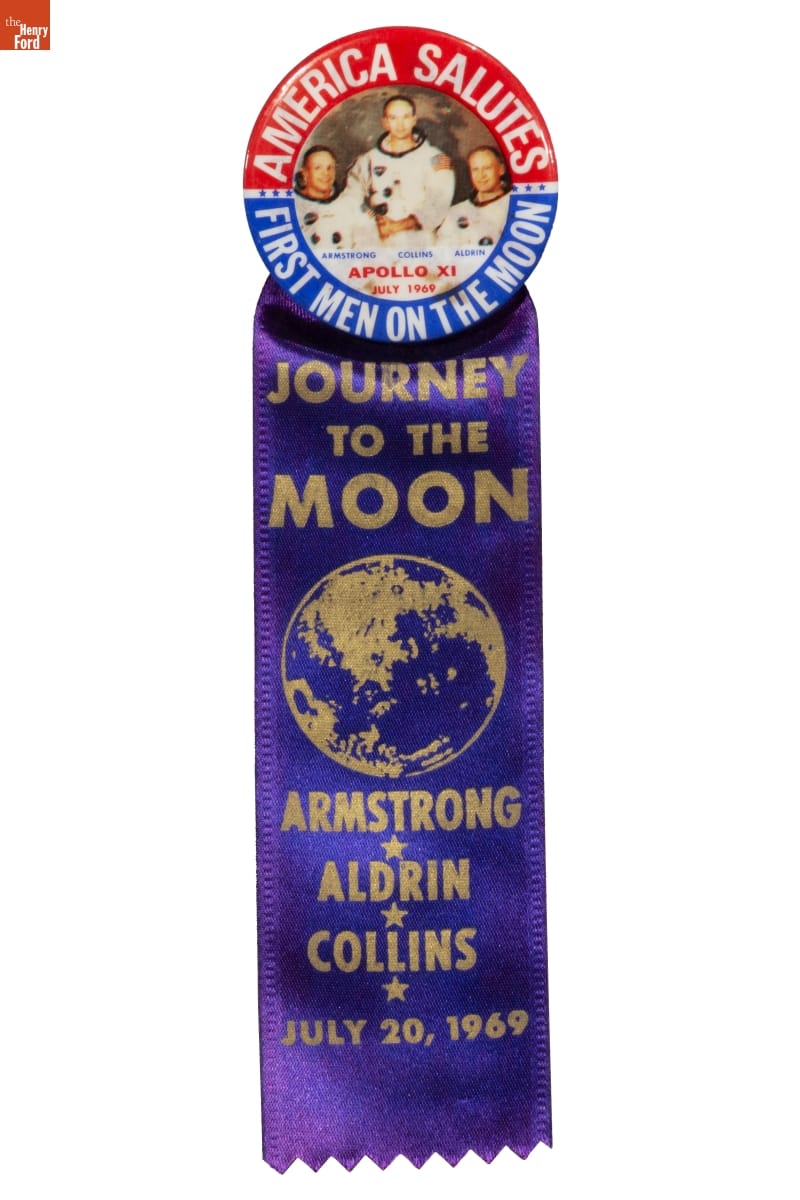 This button would have likely been proudly worn by someone attending a public celebration of the Apollo 11 astronauts. / THF189959

In the end, I believe that Neil Armstrong should be remembered for so much more than being the “first man.” For his modesty, his quiet humility, over to advance the course of human progress, he modelled values and behaviors for which we can all strive. He may have been a reluctant hero, but these qualities, to me, are exactly what make Neil Armstrong heroic.

That, and the fact that he was from Ohio (just kidding)! 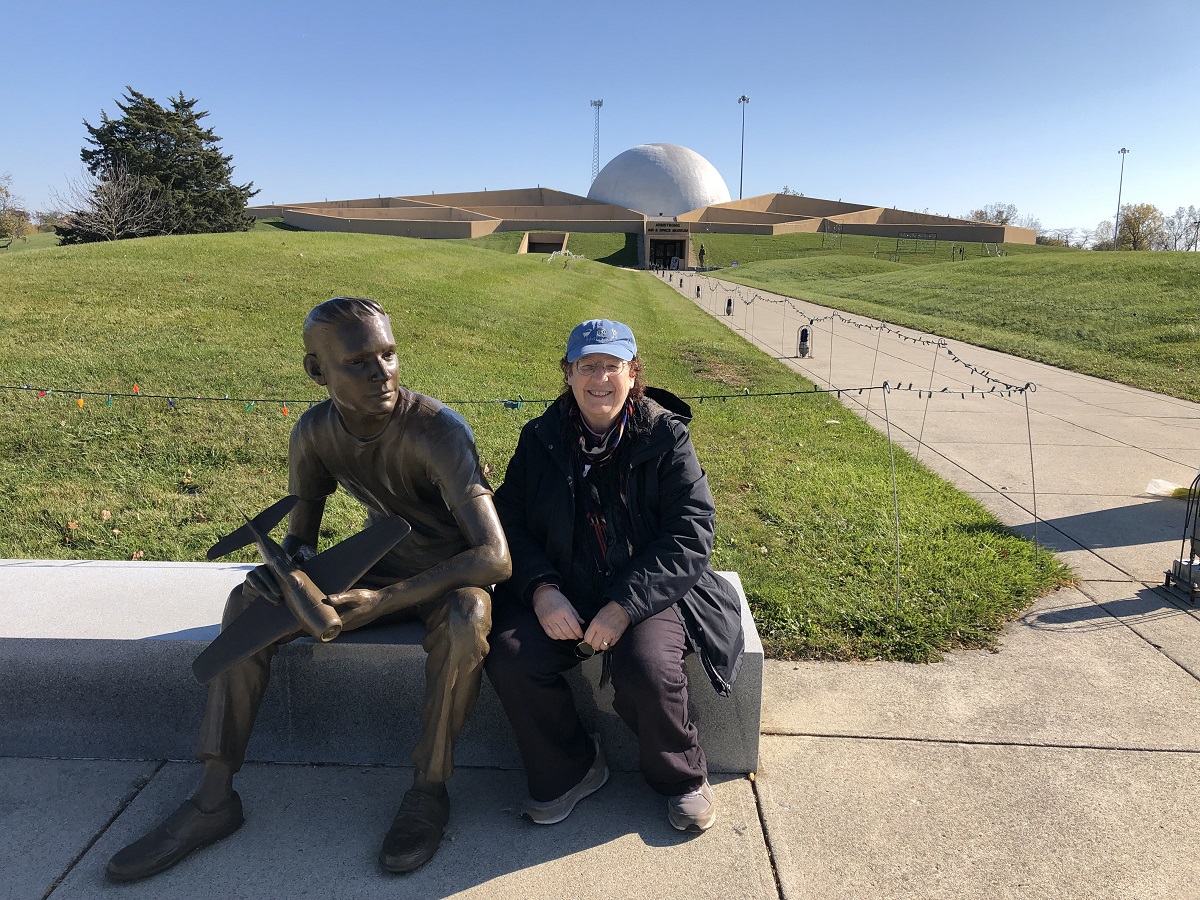 The author posing with a statue of Neil Armstrong (with model airplane fittingly in hand) on a bench in front of the Armstrong Air & Space Museum in Wapakoneta, Ohio, November 2021. / Photo courtesy of Donna Braden.