Peggy Hoyt: "Milliner and Dressmaker to the American Aristocracy" 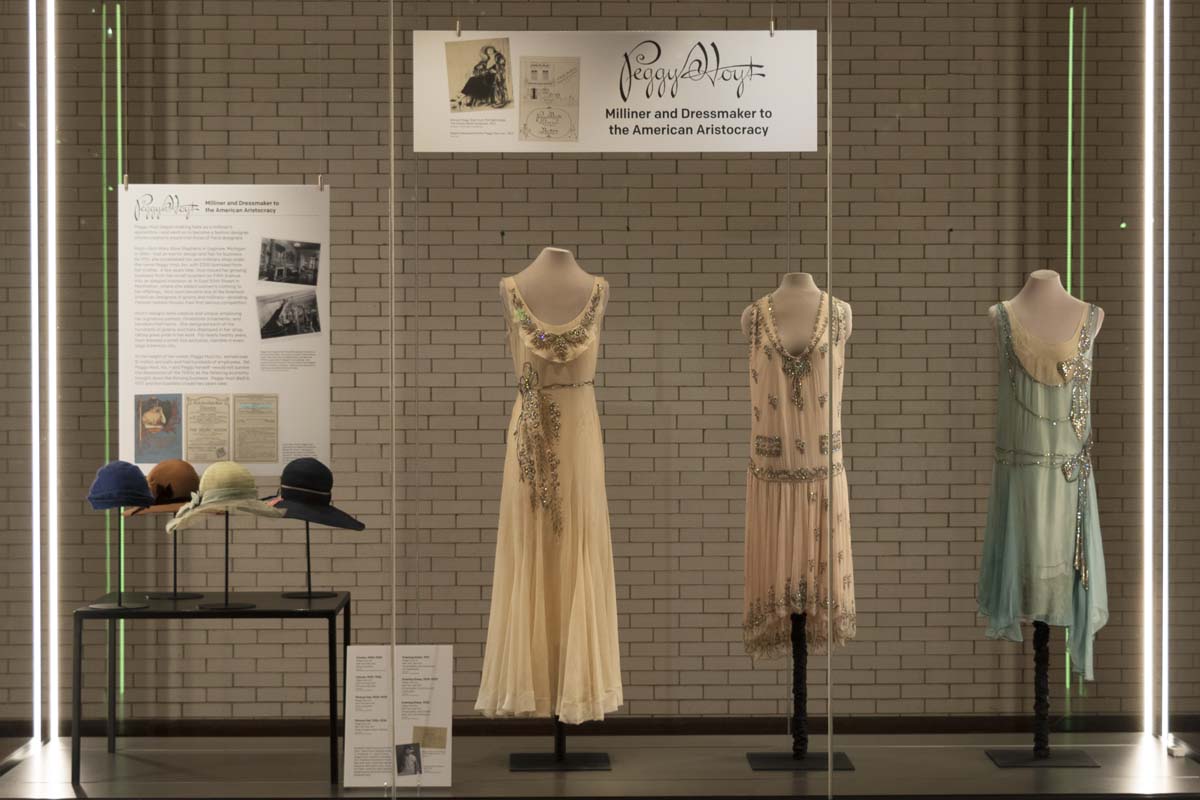 Our latest installation of What We Wore, featuring designer Peggy Hoyt. / THF189263

Our current What We Wore exhibit in Henry Ford Museum of American Innovation features garments and hats designed by Peggy Hoyt. 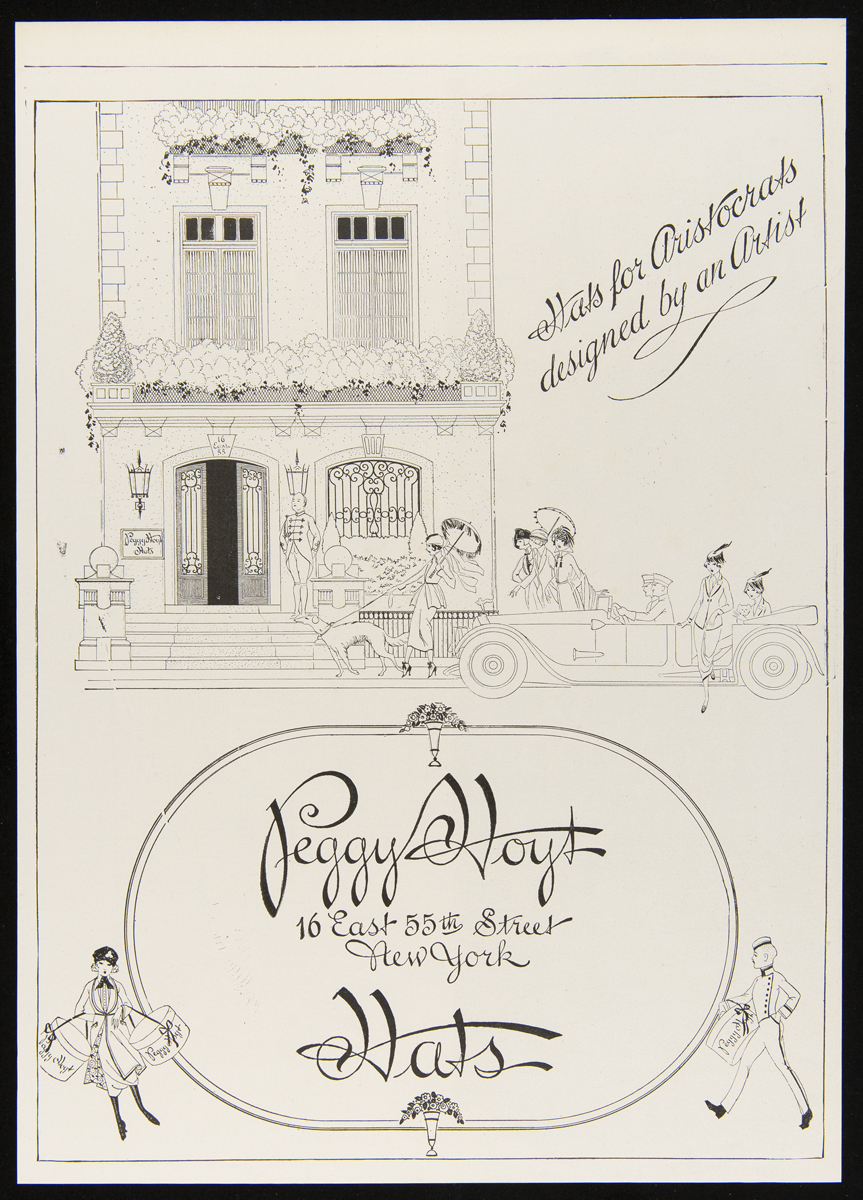 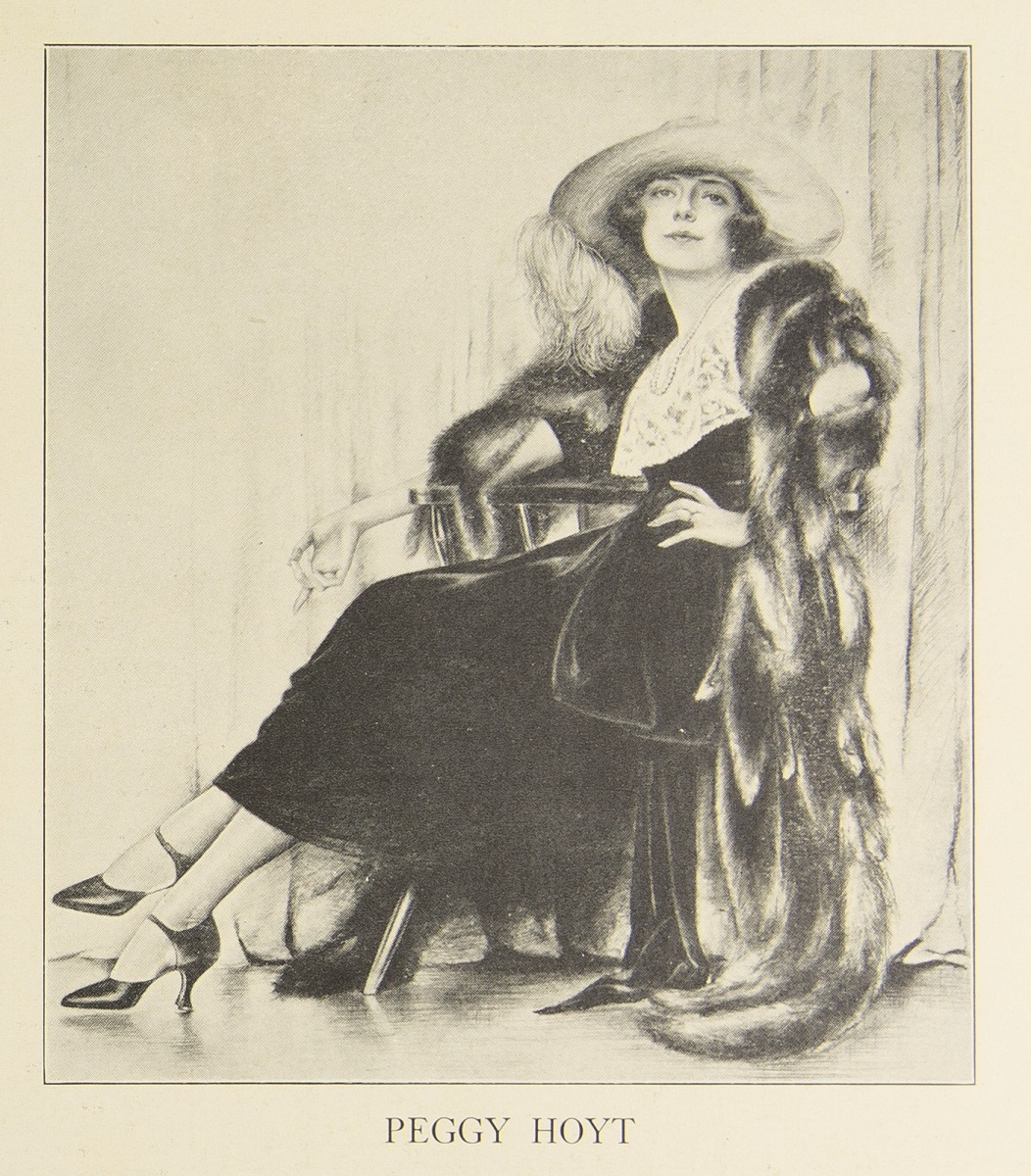 Peggy Hoyt began her career making hats as a milliner’s apprentice and went on to become a highly successful fashion designer whose creations would rival those of Paris.

Peggy Hoyt was born Mary Alice Stephens in Saginaw, Michigan, in 1886, to Charles J. Stephens, a partner in a wholesale lumber business, and Carrie Stiff Stephens.

As a child, Mary Alice liked to draw and paint. She had a keen interest in clothes, often designing and making clothing for her large family of paper dolls. When her father’s illness resulted in his inability to resume his business activities, the family’s fortunes declined. A Civil War veteran, Charles Stephens was by 1905 living in the National Home for Disabled Soldiers in Hampton, Virginia, where he died in 1915.

Carrie Stephens moved with her daughter to New York City about 1900. Here, she felt she would have a better chance to get work that offered more than a bare living, as well as provide educational advantages for her daughter, Mary Alice. Though finding work turned out to be harder than anticipated, Carrie Stephens eventually found a job as a comparison shopper for a large department store. In the years following, Carrie Stephens worked her way up to a position as one of the highest salaried European buyers for the department store B. Altman.

In 1905, 18-year-old Mary Alice Stephens married Frank Hoyt in Monterey, Massachusetts—though the couple separated after only 18 months of marriage and Mary Alice then returned to New York City. Life on a 500-acre farm in the Berkshires didn’t suit Mary Alice—she missed the excitement of urban life. She and Frank Hoyt finally divorced in 1911; she kept her married name.

In her late teens, Hoyt worked as an apprentice in a Fifth Avenue millinery (hat) shop. By 1910, with a talent for design, a flair for business, and $300 borrowed from her mother, Hoyt established her own millinery shop in tiny quarters on upper Fifth Avenue, a shopping destination lined with luxurious stores. A year later, the business was successful enough to warrant an upgrade. She rented a larger room in the same building and hired an assistant. By 1915, Peggy Hoyt, Inc. was born.

In February 1918, Hoyt married Aubrey Eads—an officer in the American Naval Aviation Detachment who had recently returned after 14 months in France during World War I. Eads became her business partner.

In the late 1910s, Hoyt moved her growing business into the elegant Phillip Rhinelander mansion at 16 East 55th Street in Manhattan, where she added women’s clothing to her offerings. The mansion, located in Manhattan’s Upper East Side shopping area, provided over 27,000 square feet of space with a stately white marble hall and a magnificent stairway. Hoyt transformed the mansion into one of the most exquisite fashion centers in America. The first floor became a reception room, salon, and fitting rooms. The second floor was devoted entirely to millinery. The top floors held workrooms and a lunchroom for employees. 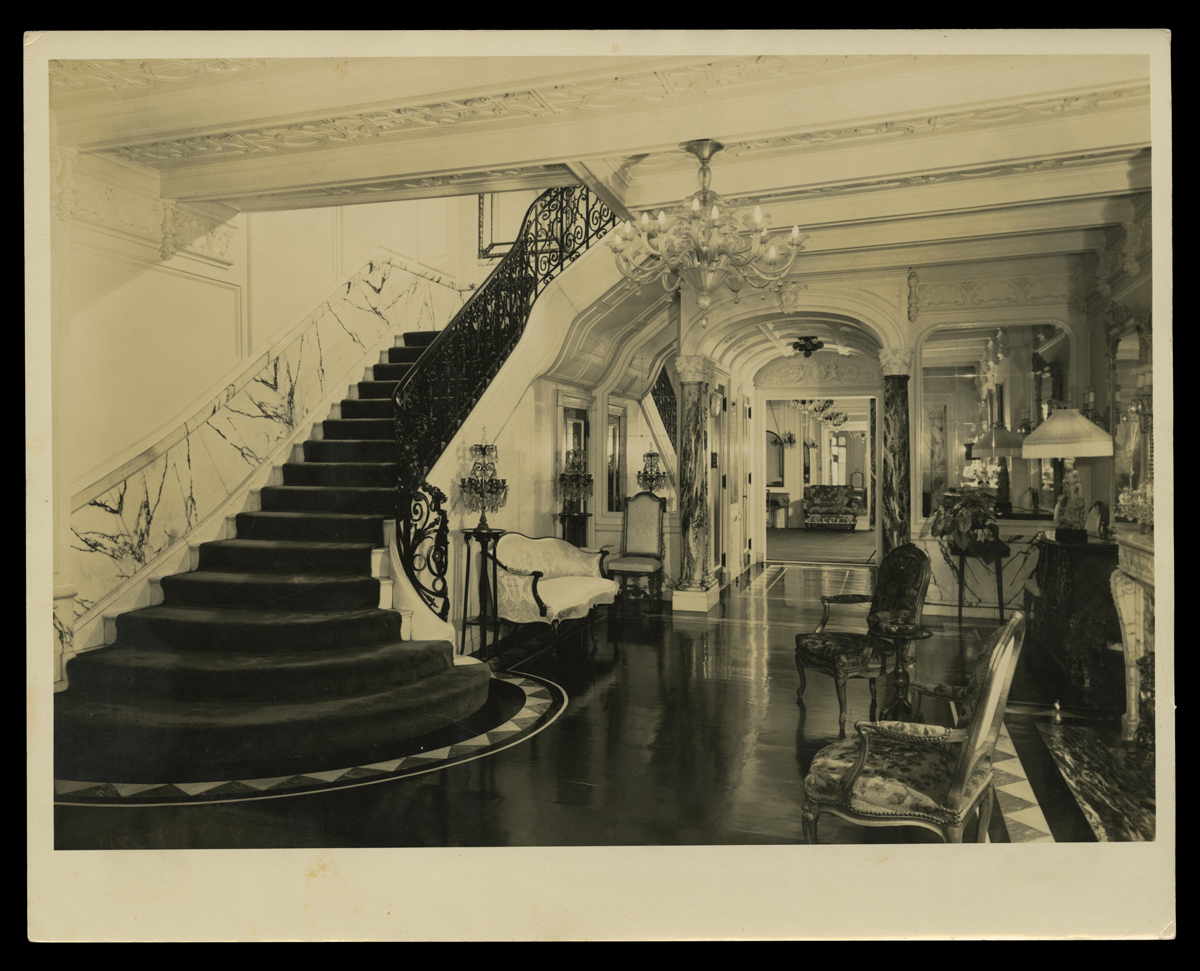 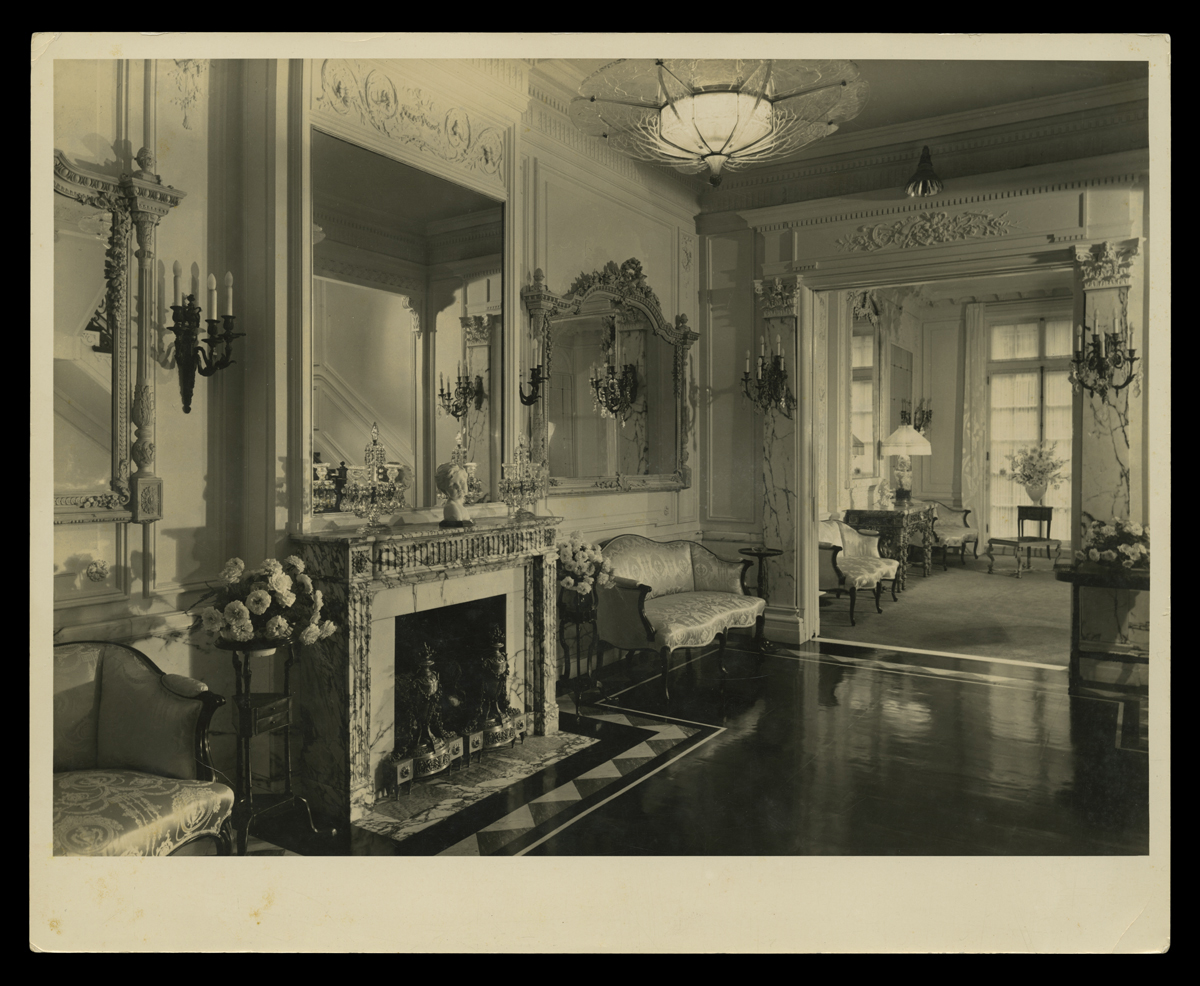 Peggy Hoyt leased the Phillip Rhinelander mansion on at 16 East 55th Street, transforming it into a stunning setting for her increasingly successful salon. Gift of Colleen Cruise Reynolds. / THF120772, THF120770

A few years after she moved to the Rhinelander mansion, Peggy Hoyt ventured into theatrical costume design for a brief time. Her elegant costumes for Henry W. Savage’s revival of The Merry Widow in September 1921 were a huge success. The following year, she created costumes for the Savage musical The Clinging Vine. 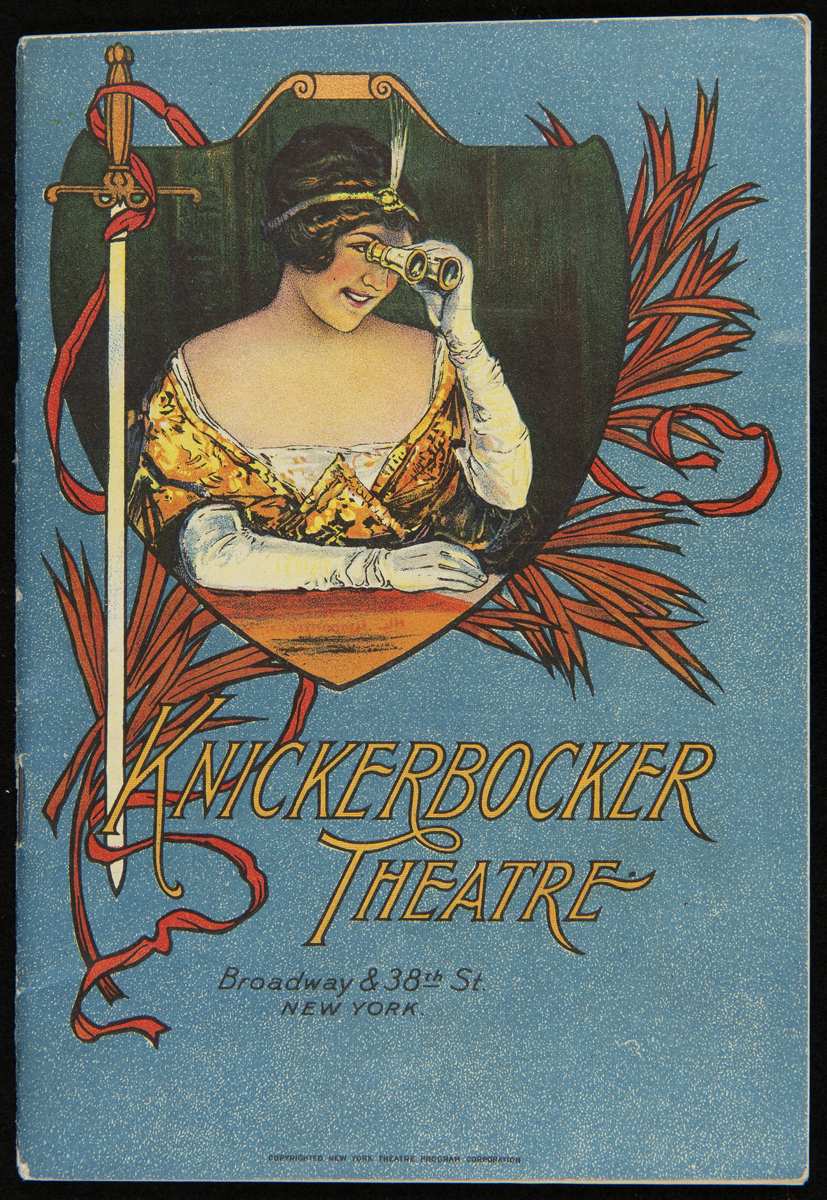 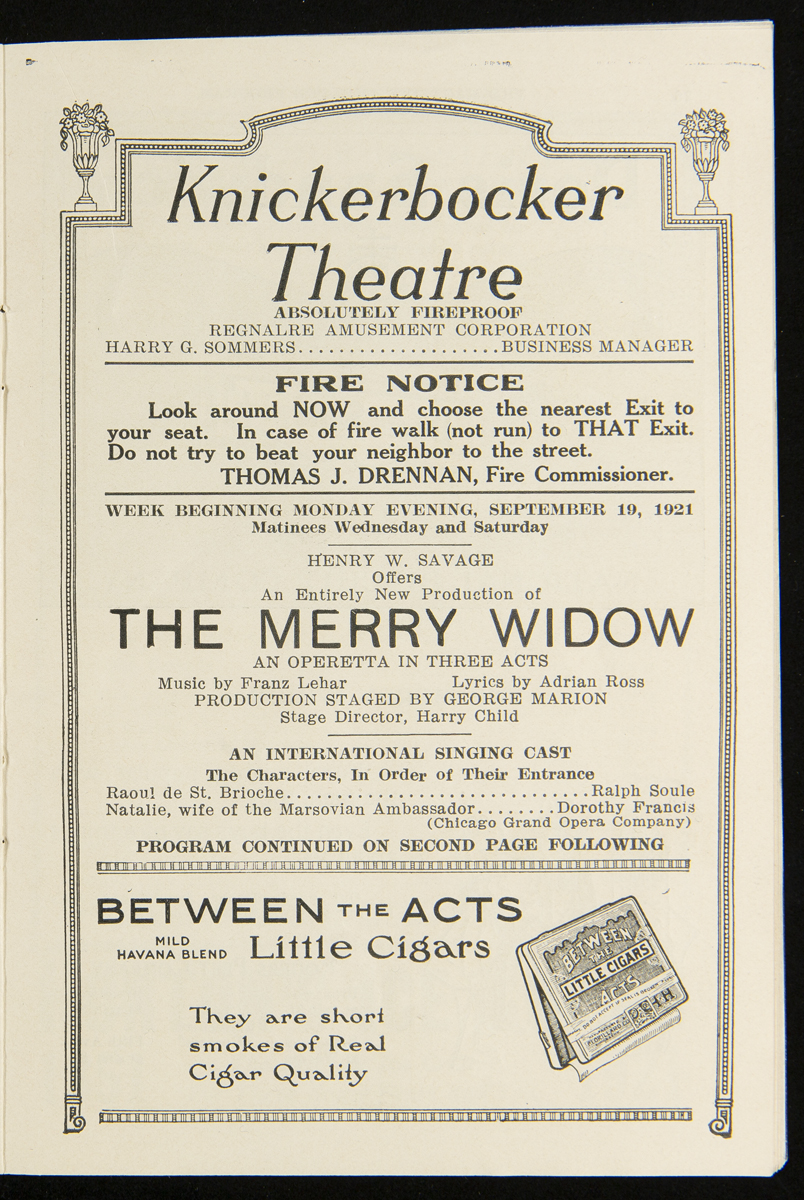 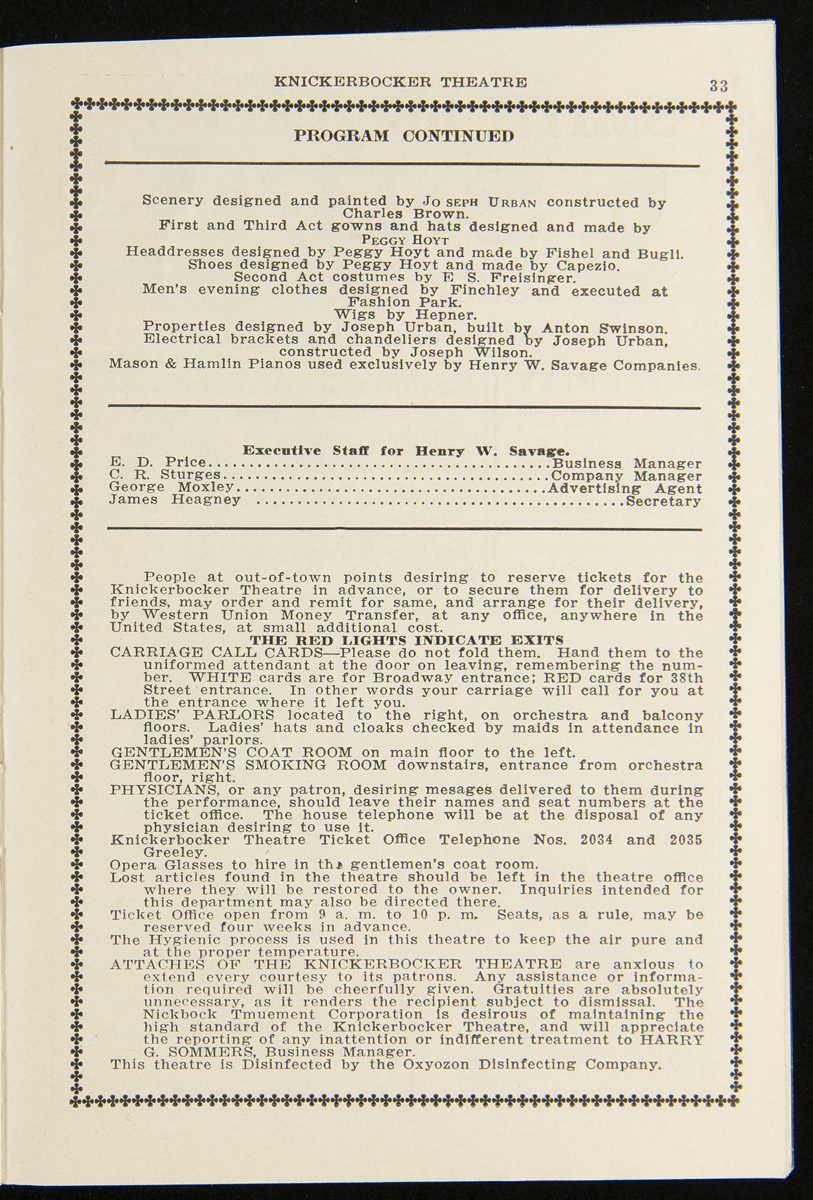 Program for The Merry Widow. The operetta ran for 56 performances in fall of 1921 at the Knickerbocker Theatre in New York. Note the credits for Peggy Hoyt at the top of page 33 (you can click through to our Digital Collections to zoom in). / THF624648, THF624630, THF624638

Hoyt quickly became one of the foremost American designers of gowns and millinery. Her designs were creative and unique, employing her signature pastels, rhinestone ornaments, and handkerchief hems. Hoyt designed each of the hundreds of gowns and hats in her shop, taking great pride in her work. For nearly twenty years, Hoyt dressed a small, but exclusive, clientele in every large American city. 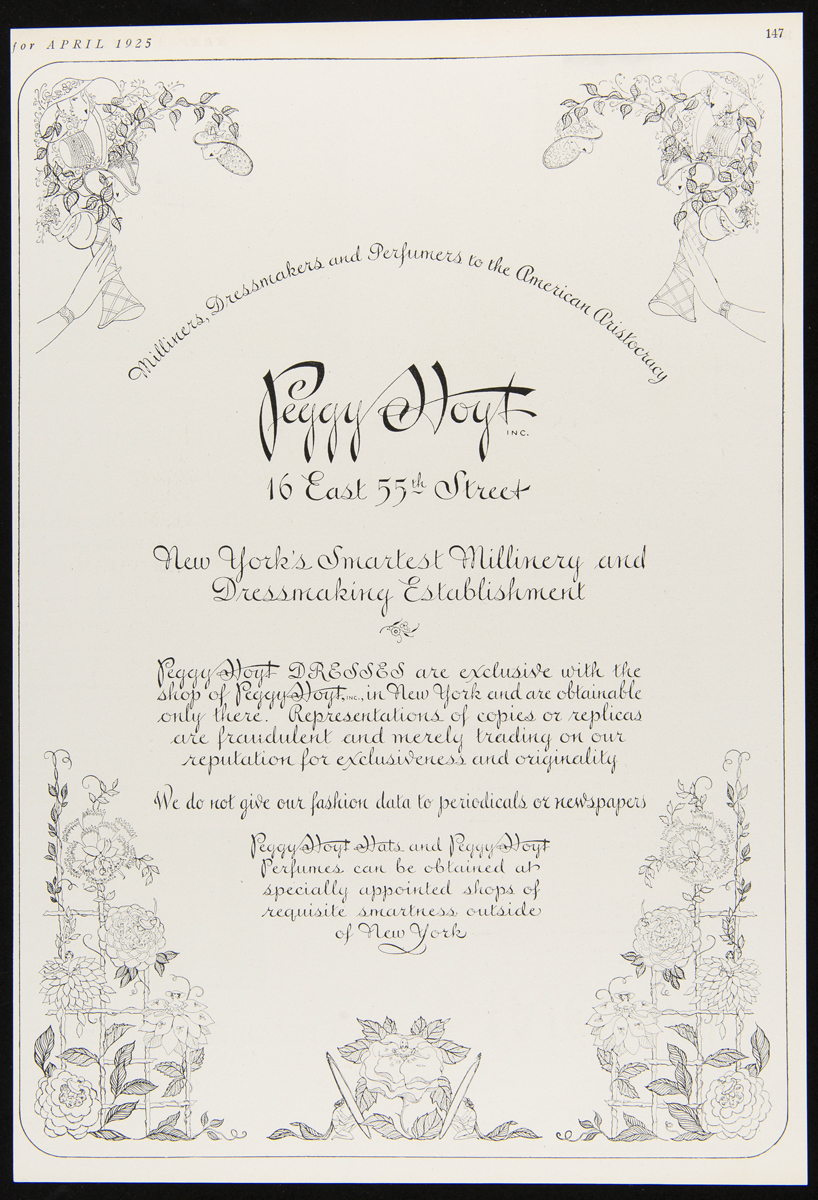 Peggy Hoyt discussed the type of garment, color, style, and fabric with her client, and then sketched the designs. Hoyt oversaw the next steps in the workroom, where staff cut and sewed the garment. Clients had their very own dress form, an adjustable mannequin on which Hoyt’s designs came to life. At the client’s next appointment, the garment was taken to the front of the salon for the final fitting. 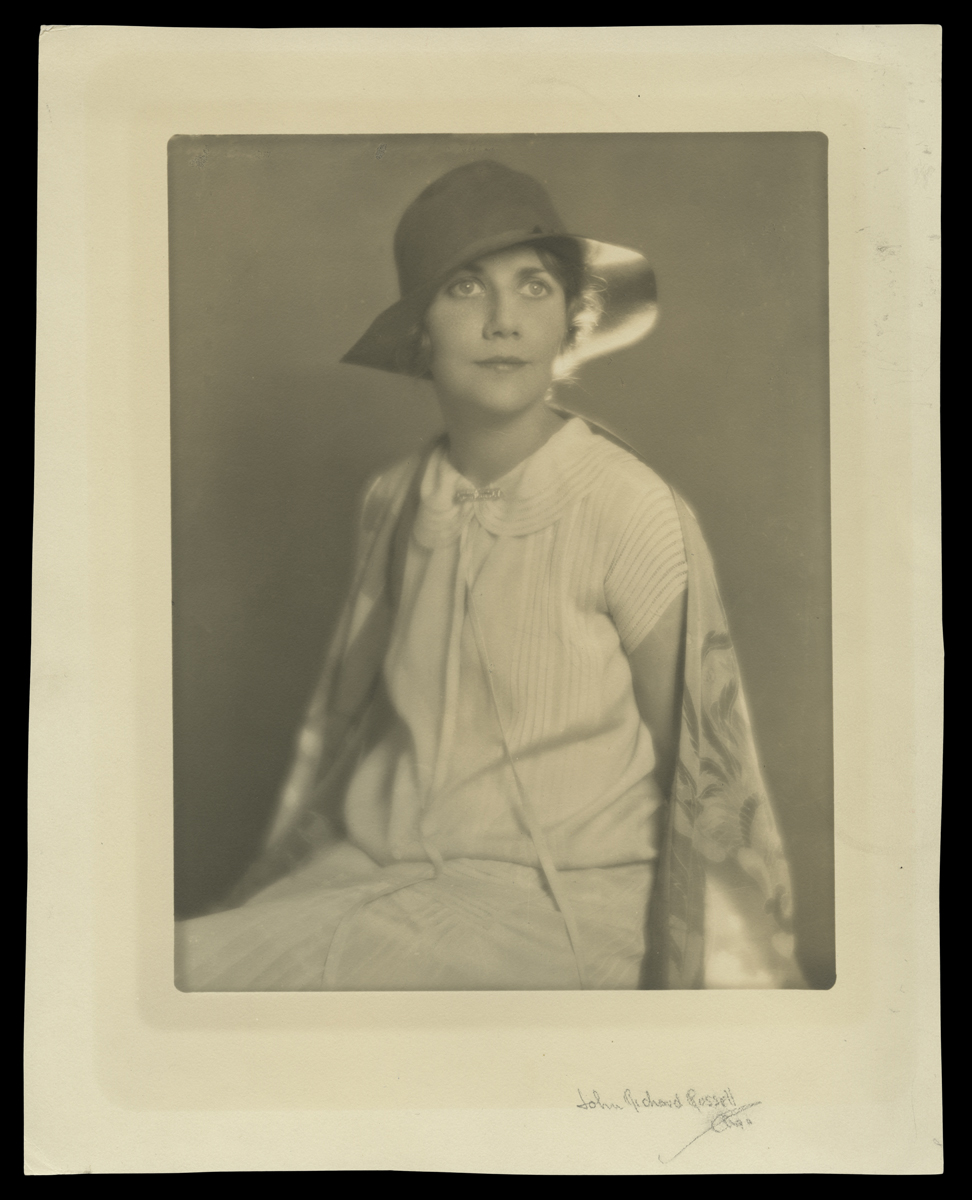 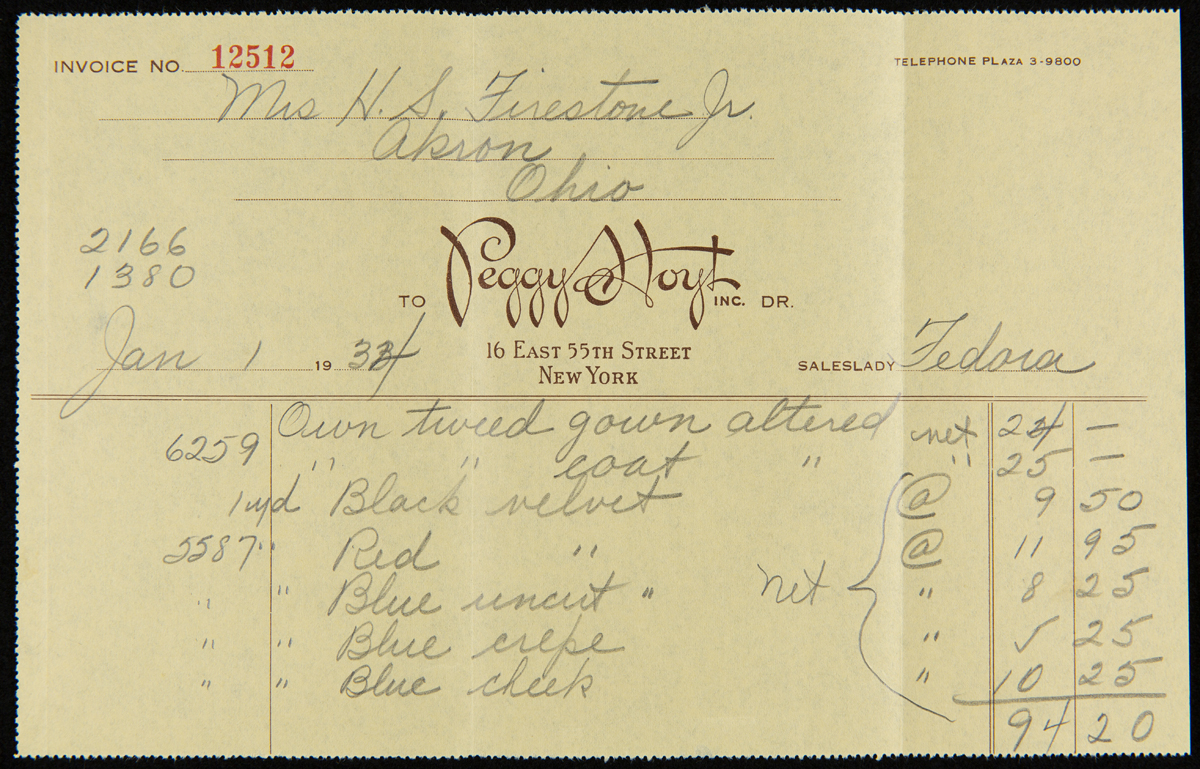 Elizabeth Parke Firestone of Akron, Ohio—wife of tire magnate Harvey S. Firestone, Jr.—was among the wealthy women who frequented Peggy Hoyt’s salon. Mrs. Firestone traveled to New York, where Hoyt would confer with her client and then create the beautiful garments and hats for Mrs. Firestone shown here. 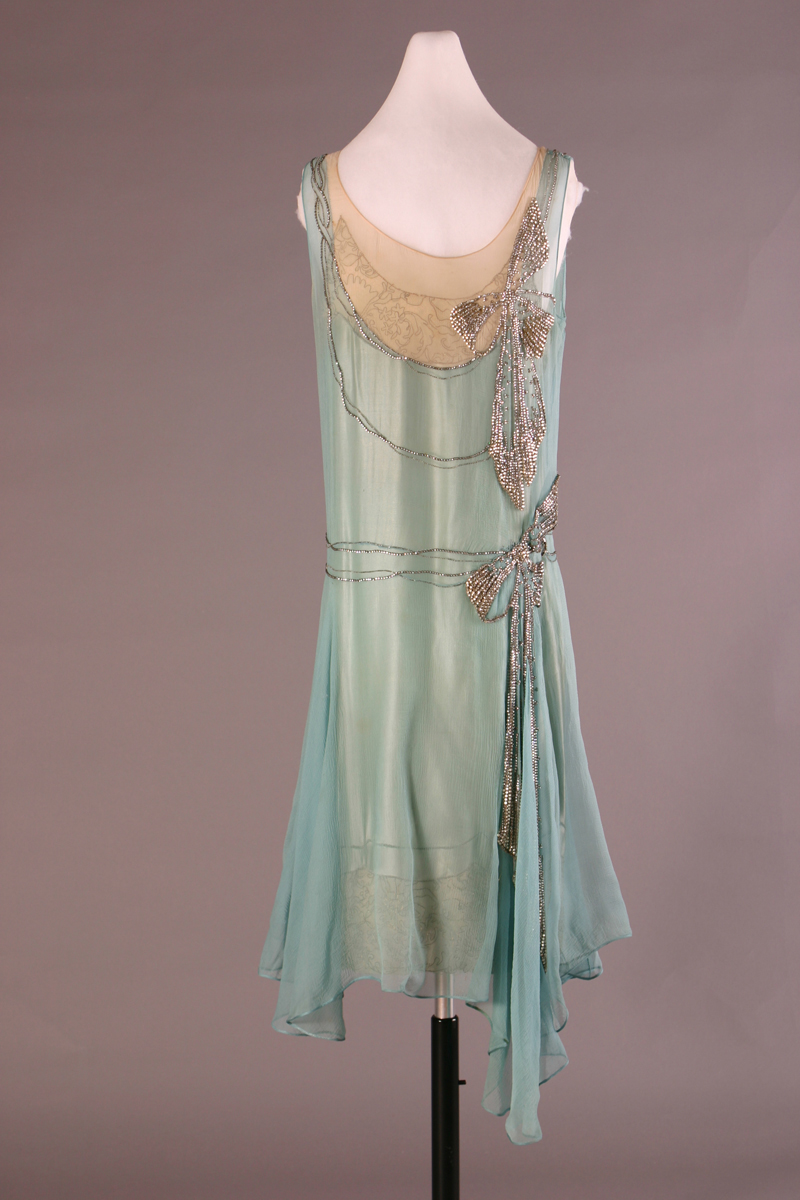 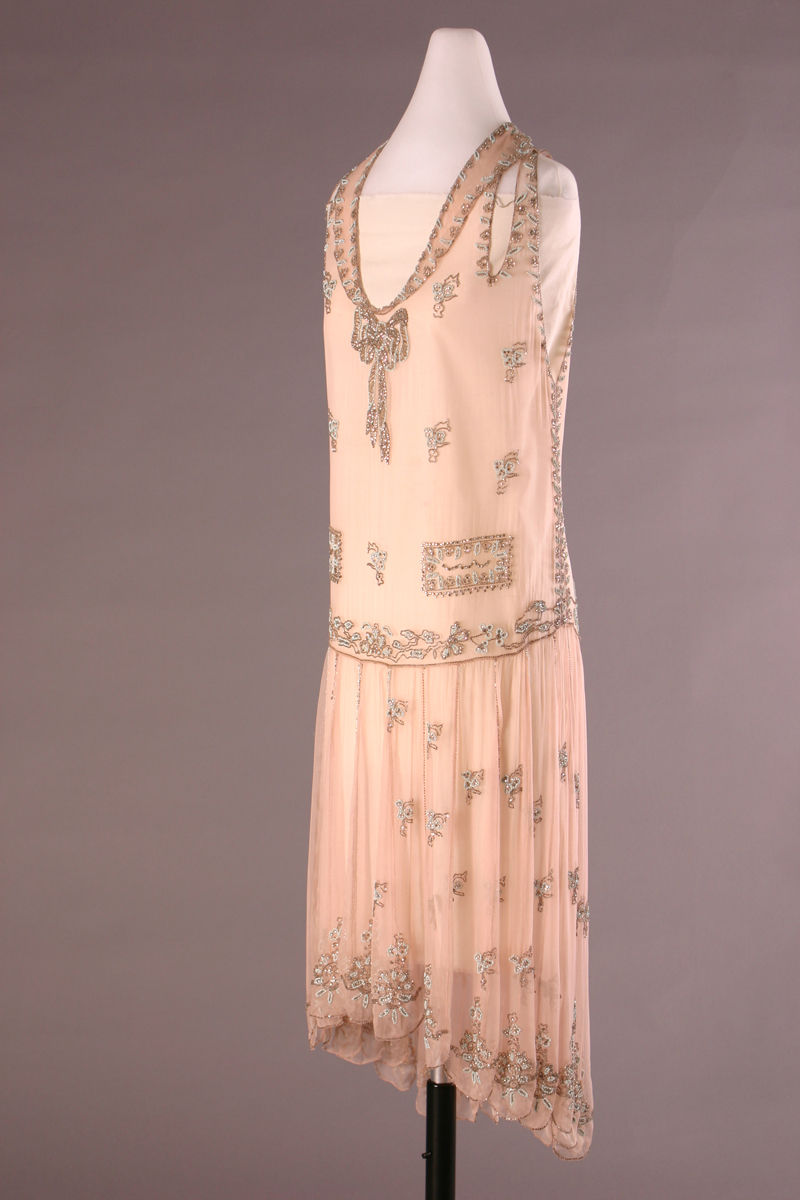 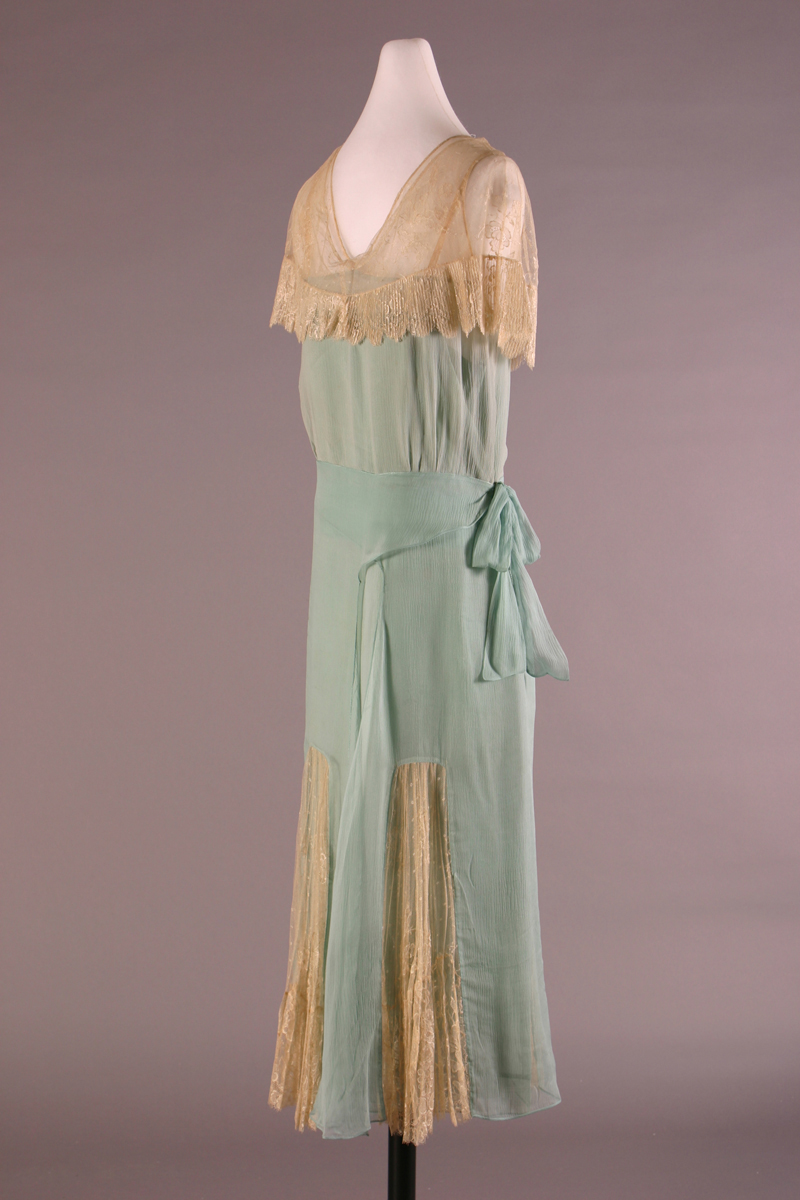 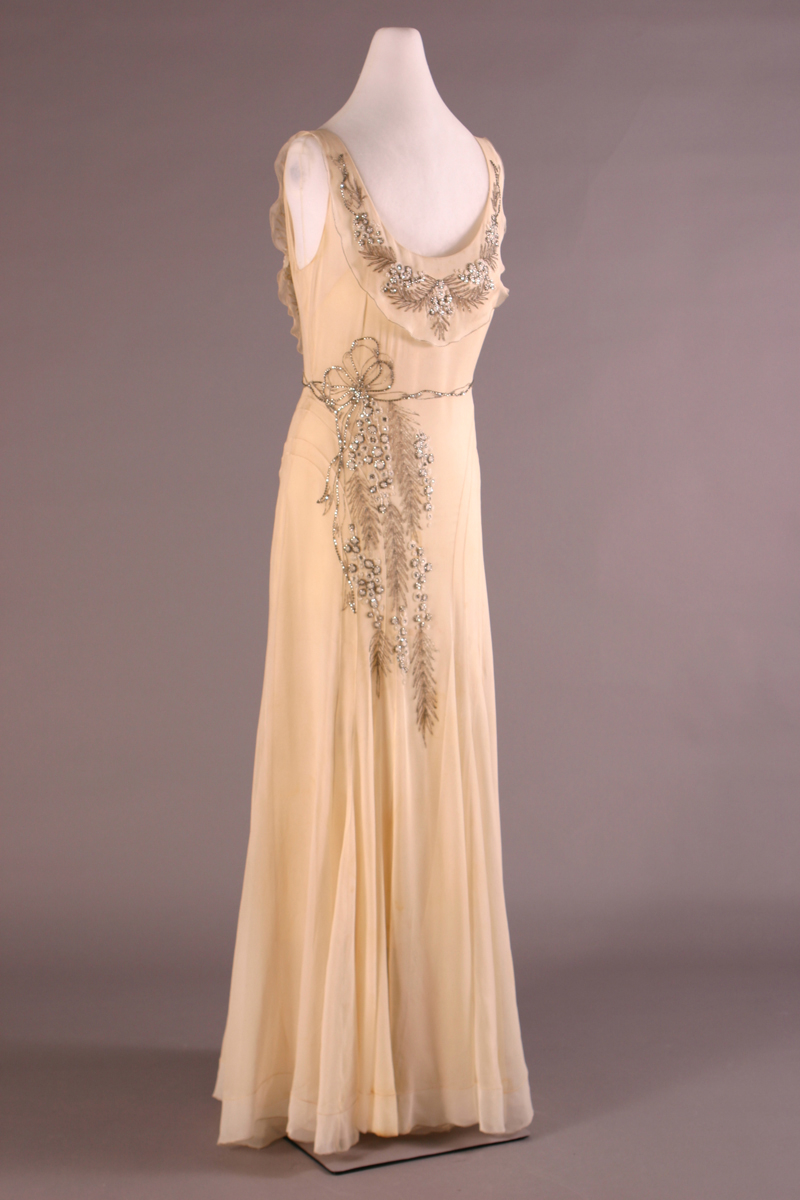 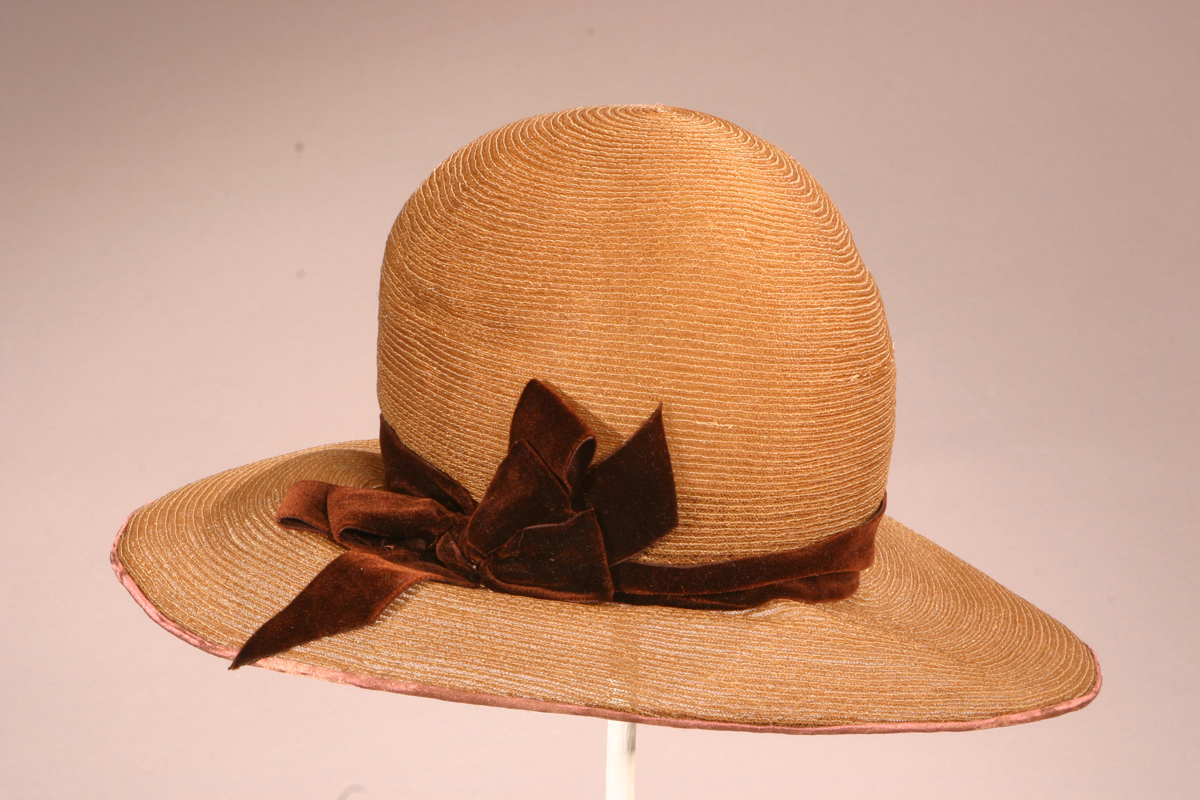 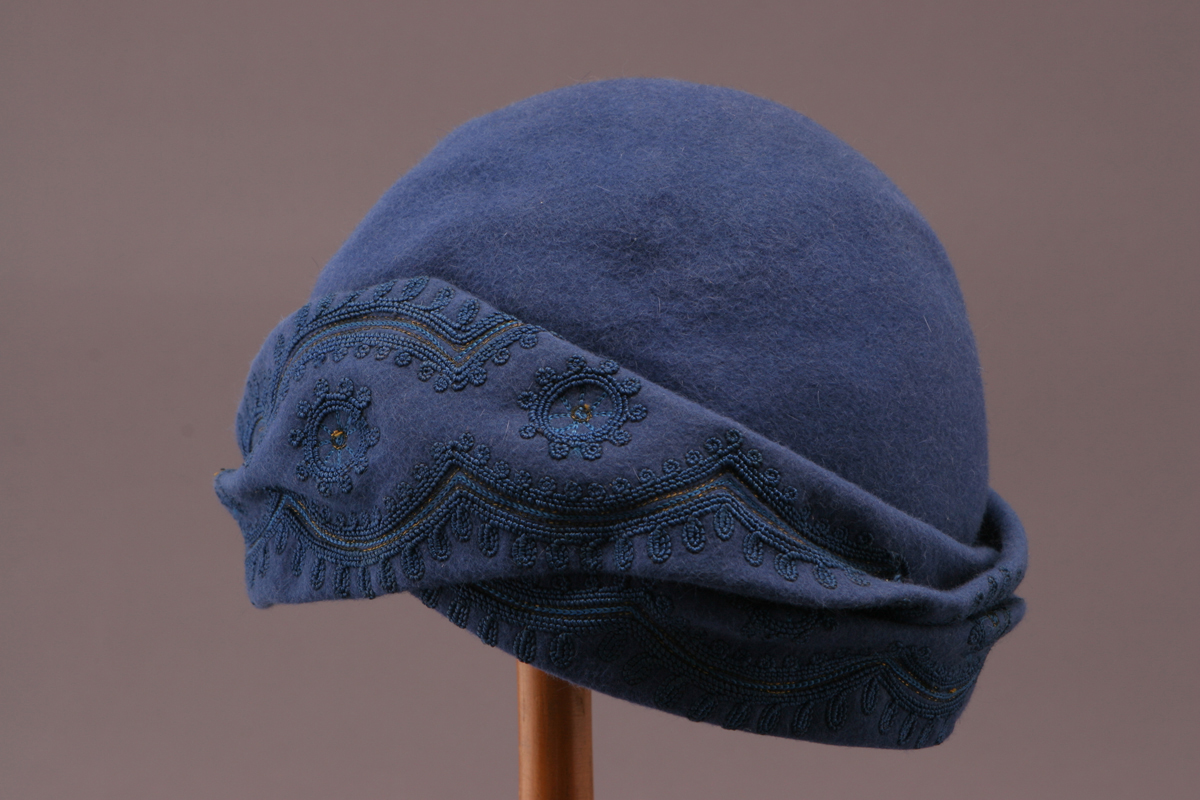 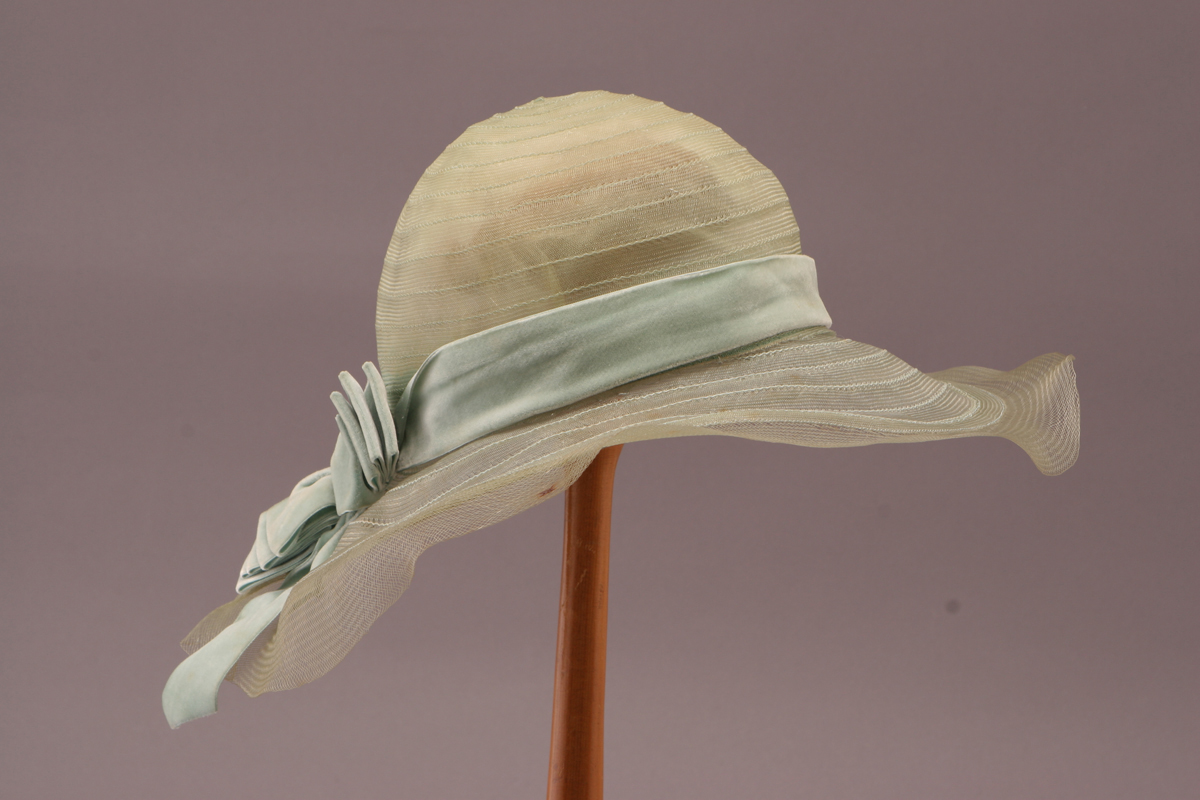 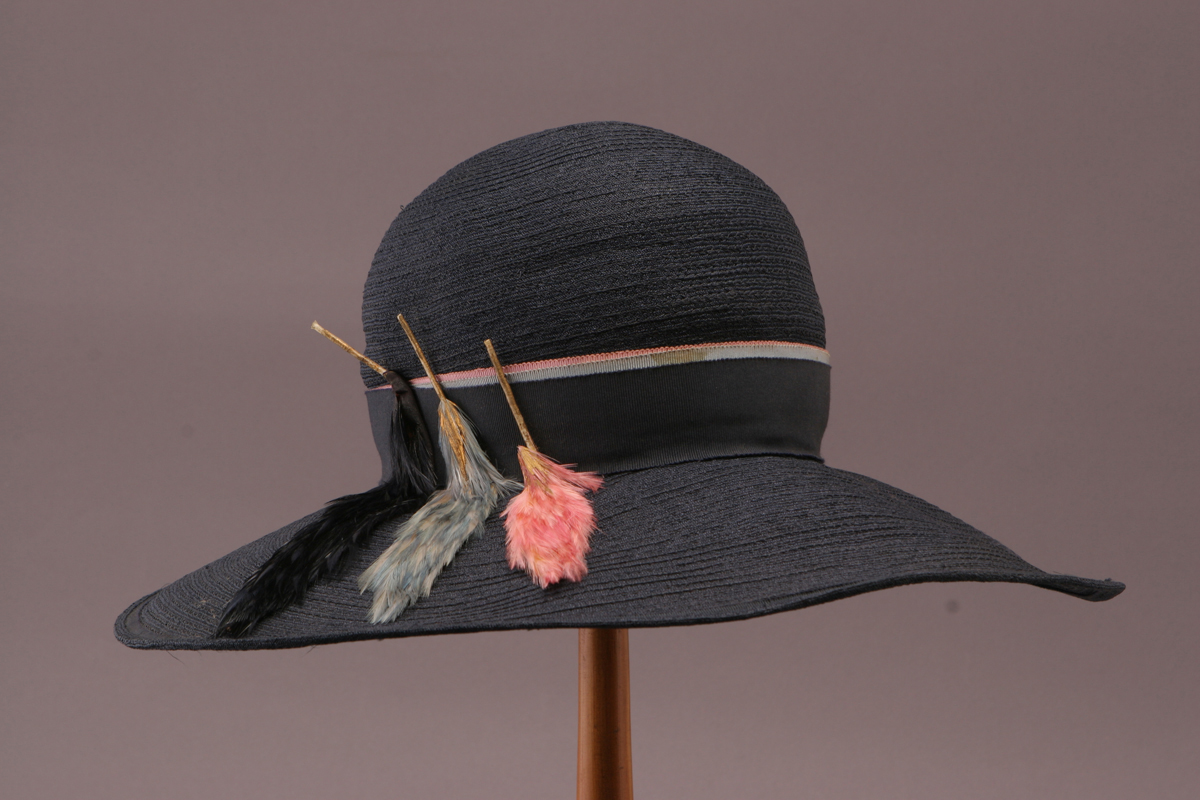 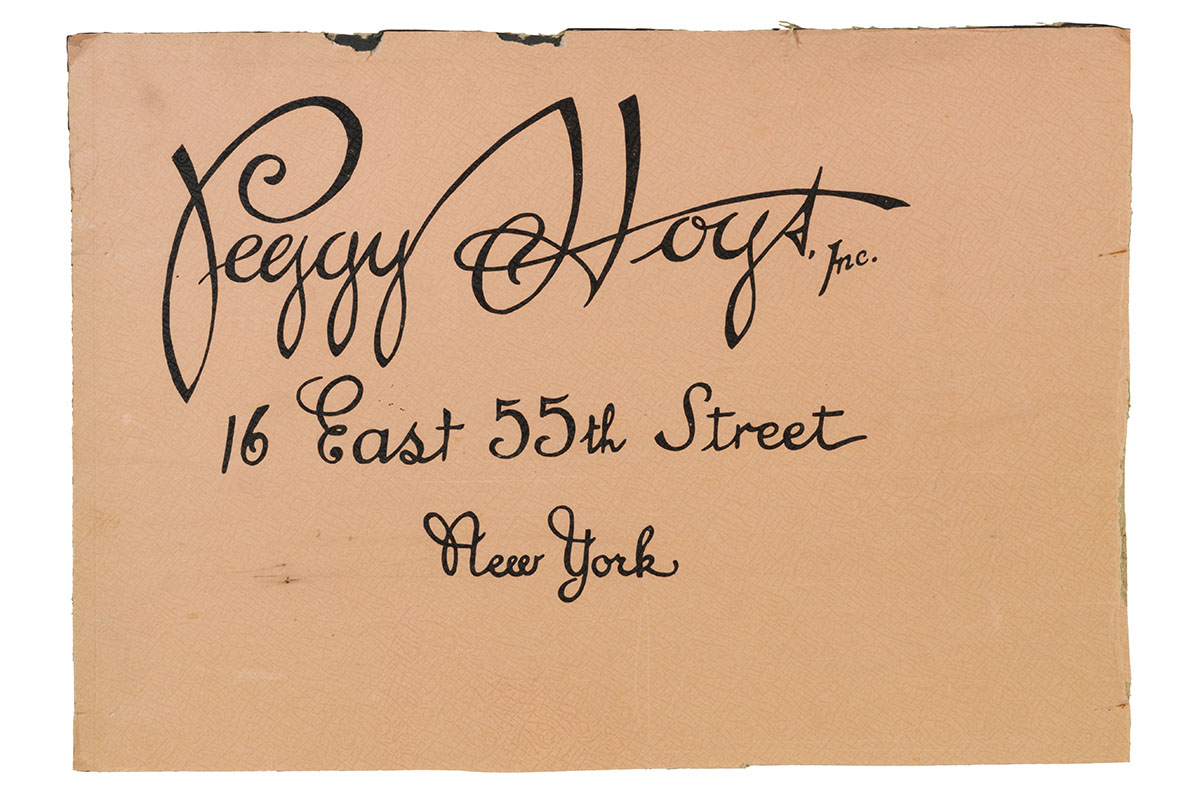 At its height, Peggy Hoyt, Inc., earned over $1 million annually and had hundreds of employees. Yet Peggy Hoyt, Inc.—and Peggy herself—would not survive the depression of the 1930s as the faltering economy brought down the thriving business.

Peggy Hoyt died by suicide on October 26, 1937 (though her family maintained that her death resulted from pneumonia). Hoyt, who had an intense dislike of personal publicity, had asked her mother and husband to honor her wishes for privacy upon her death. At the request of Hoyt’s employees, her husband did consent to a small service at the Little Church Around the Corner (the Church of the Transfiguration) before Hoyt’s body was brought to Detroit and laid to rest in Elmwood Cemetery.

Peggy Hoyt, Inc., briefly continued after Hoyt’s passing, with her mother and husband maintaining the salon until its bankruptcy and liquidation in 1939–1940.