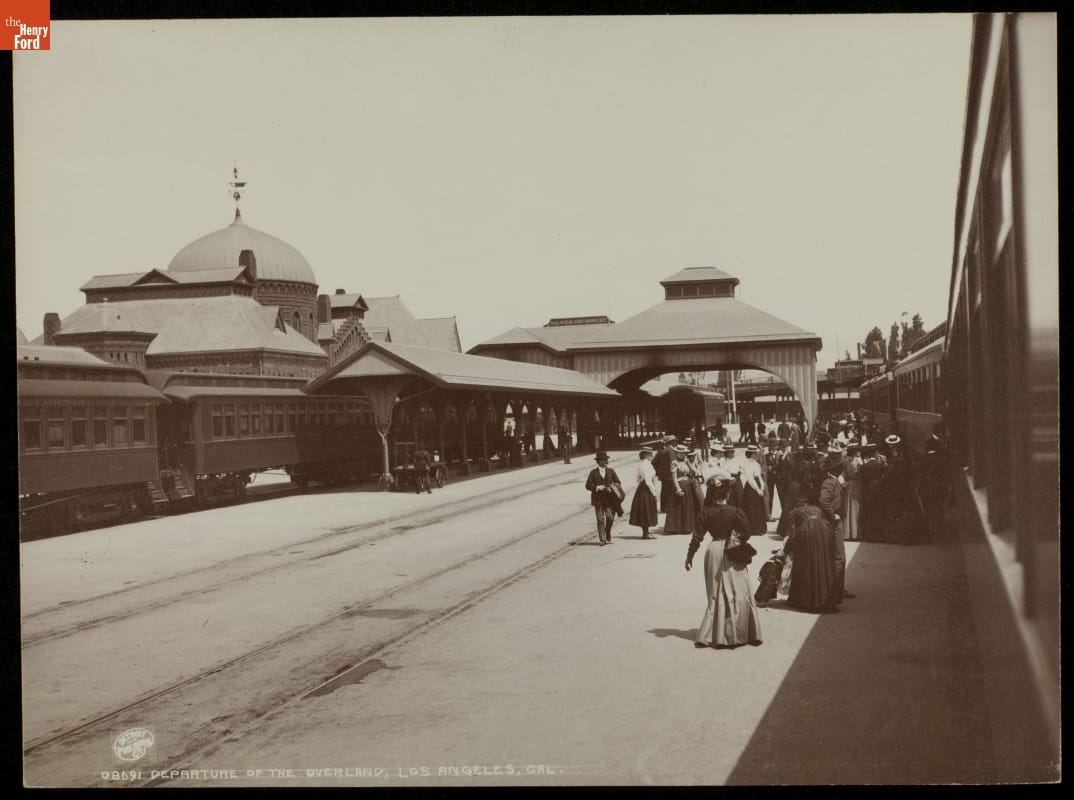 Passengers rush to board the Overland Limited, which ran between Los Angeles and Chicago over the Atchison, Topeka, & Santa Fe Railway, ca. 1905. / THF207763

Between 1865 and 1920, America’s railroad network increased sevenfold, from 35,085 miles to an all-time high of 254,037 miles in 1916. The rapid expansion of the national rail network corresponded with major technological improvements—including double tracking, improved roadbeds, heavier and faster locomotives, and the elimination of sharp curves—which allowed trains to operate at higher speeds. Travel times were steadily cut year by year. To emphasize time savings, railroad companies began to give their faster lines special names like “flyer,” “express,” and “limited.” 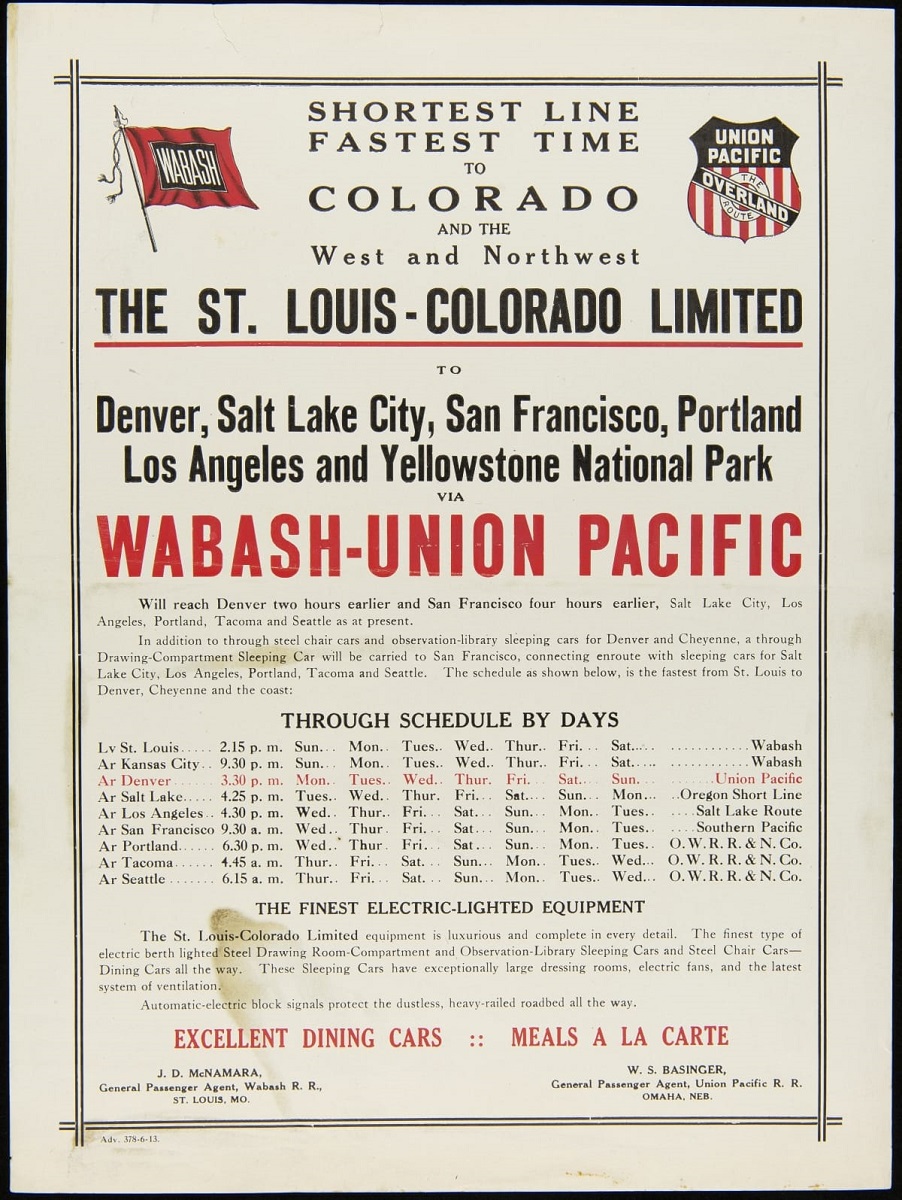 This 1913 timetable for the St. Louis-Colorado Limited line of the Wabash-Union Pacific Railroad boasted that it was the shortest line with the fastest time between destinations. / THF291441

However, increased speed came with disadvantages. High speeds resulted in an increasing number of gruesome railroad accidents caused by both discrepancies in local times and mix-ups between different railroad companies’ timetables. 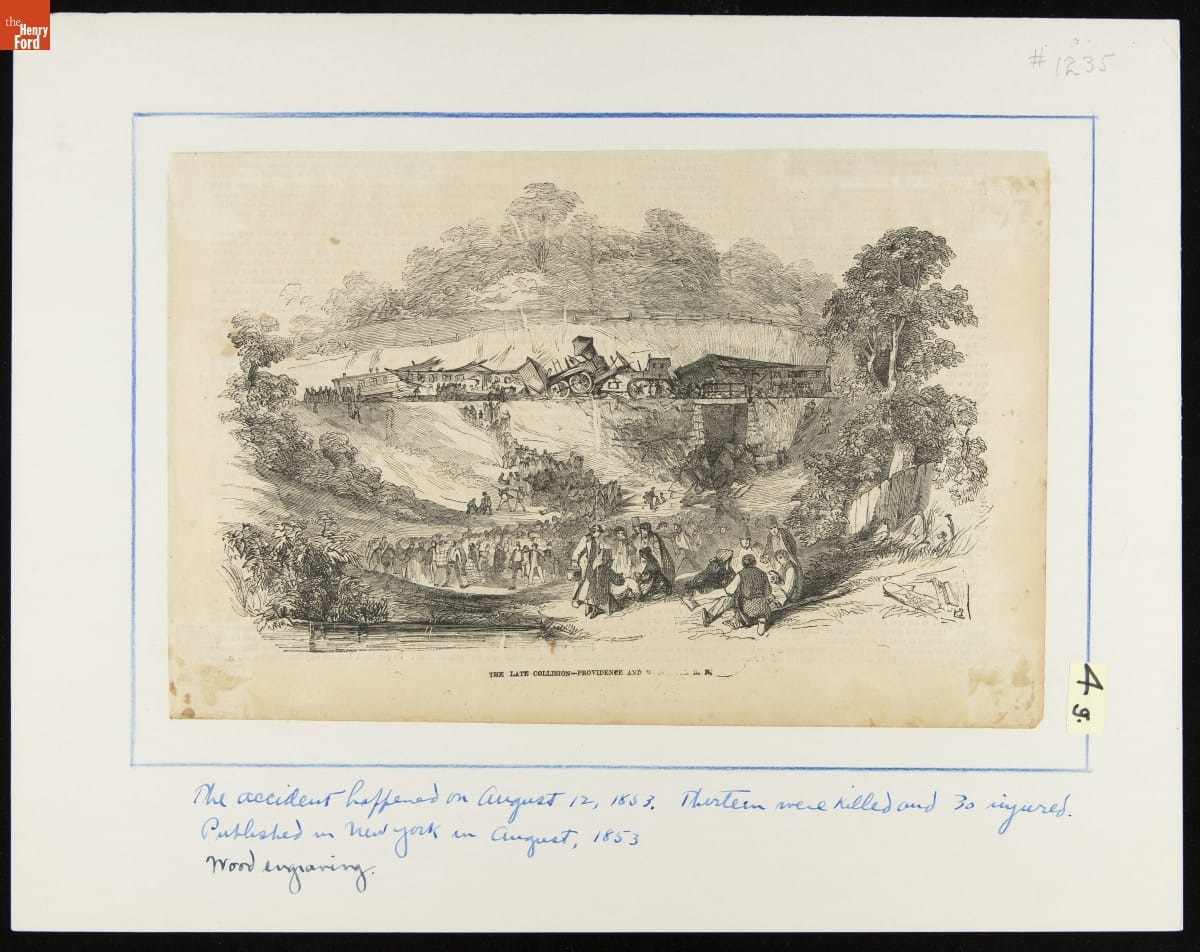 A catastrophic collision occurred between two passenger trains on the Providence & Worcester Railroad when they failed to meet at a passing siding as scheduled, 1853. / THF622050

Facing governmental intervention to address the problem, the railroads took it upon themselves to enact a single standardized time across the country by dividing the nation into five roughly even time zones. Some people at first rebelled against this arbitrary imposition, especially when the newly drawn time zone designations did not align with local practices. But most people found it increasingly convenient to set their clocks by this new “standard time.” 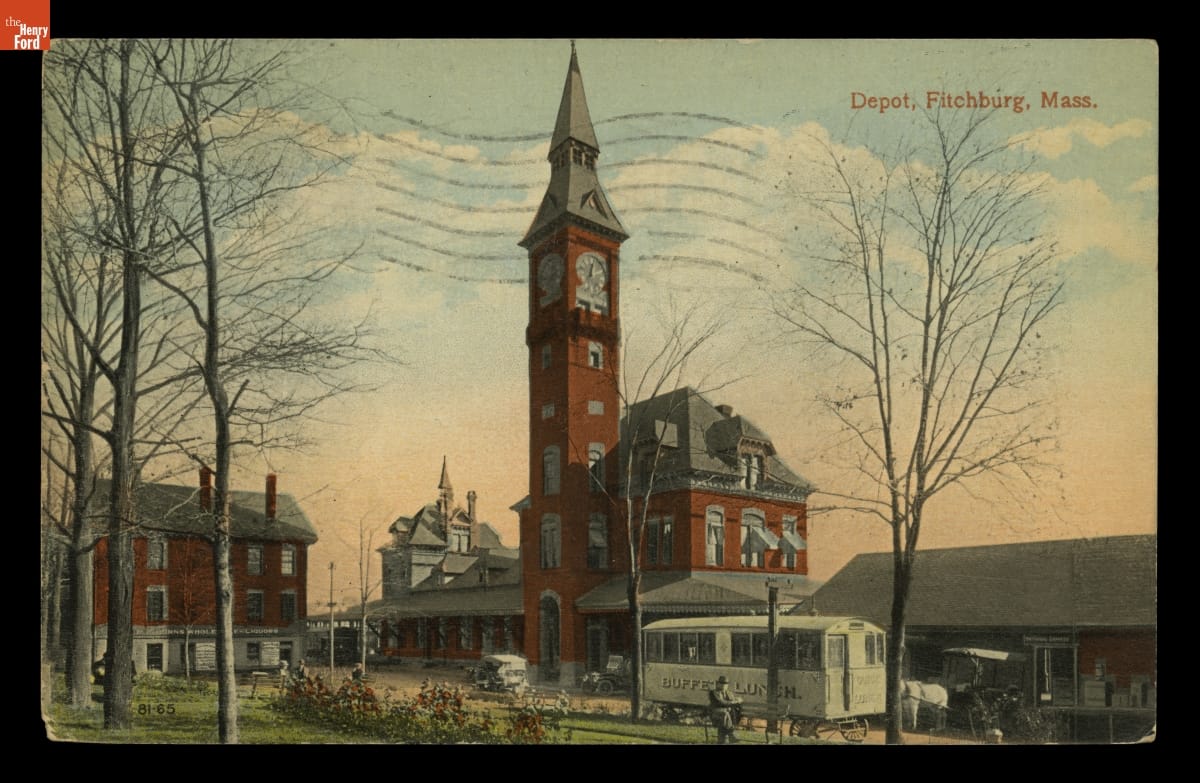 Residents of Fitchburg, Massachusetts, would have synchronized the time on their personal clocks and watches to the railroad depot clock seen in this ca. 1916 postcard. / THF124830

Another disadvantage, some people complained, was that the increasing speed of railroad travel was unhealthy. Many believed that the rapid pace of life contributed to new forms of stress and anxiety and that the railroad was a key cause of these problems. 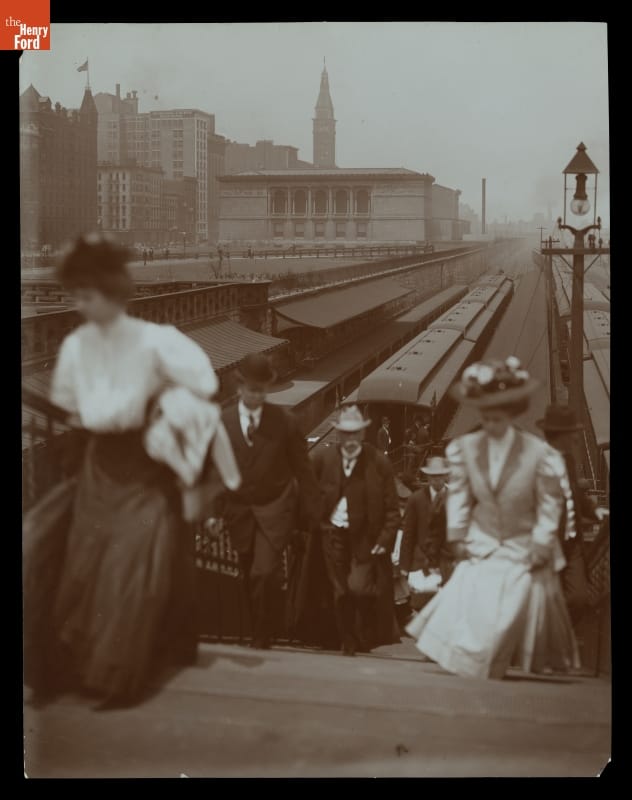 Railroad passengers ascending the staircase after arriving in Chicago, via the Illinois Central Railroad, ca. 1907 / THF105820

By 1920, railroad passenger travel was at the highest level it would ever attain. But, with the exception of the unique conditions during World War II, the railroad would never again be the dominant form of personal transportation in America. Within a few decades, the American public would embrace automobiles with the passion they had once given over to the railroads. How did this transfer of allegiance from railroad to automobile occur so effortlessly and completely during the early 20th century, and how does it relate to Americans’ changing concepts of time? 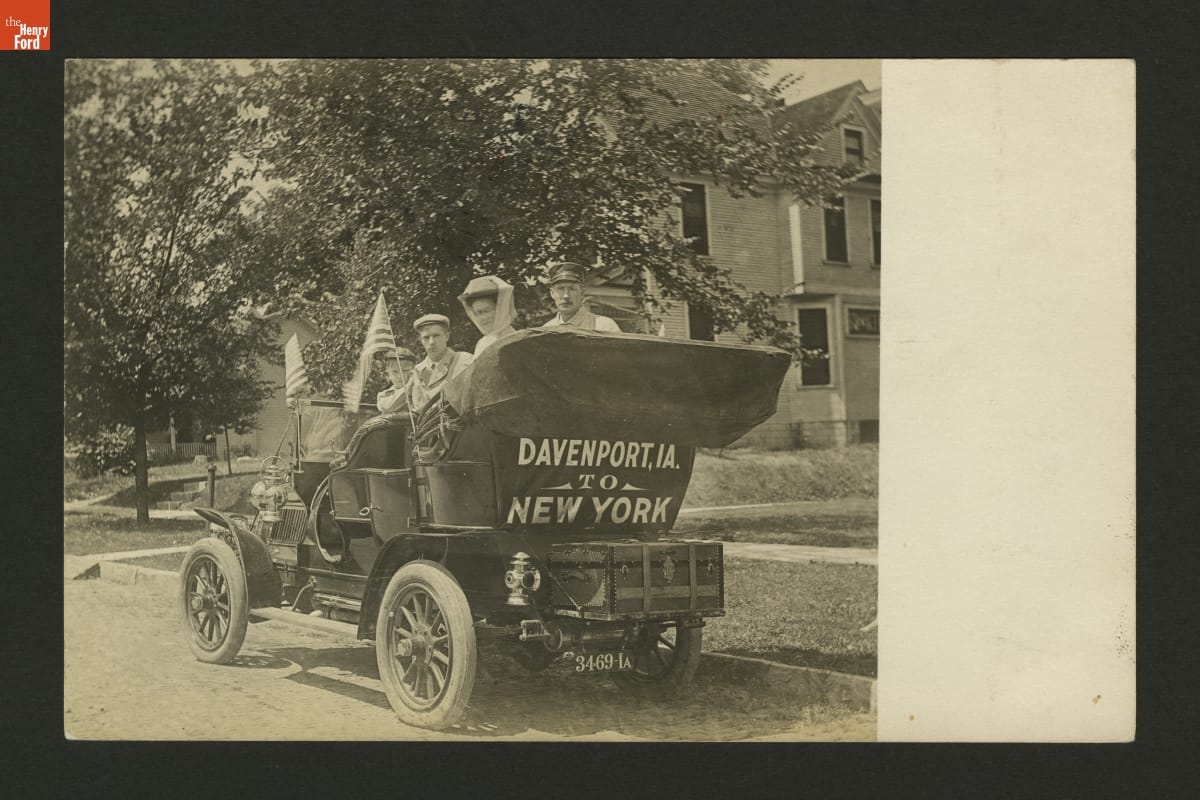 At first, many railroad managers did not take automobiles seriously—and for good reason. When they were first introduced in the 1890s, automobiles had no practical purpose. They were considered amusing and entertaining playthings for wealthy hobbyists and adventurers. 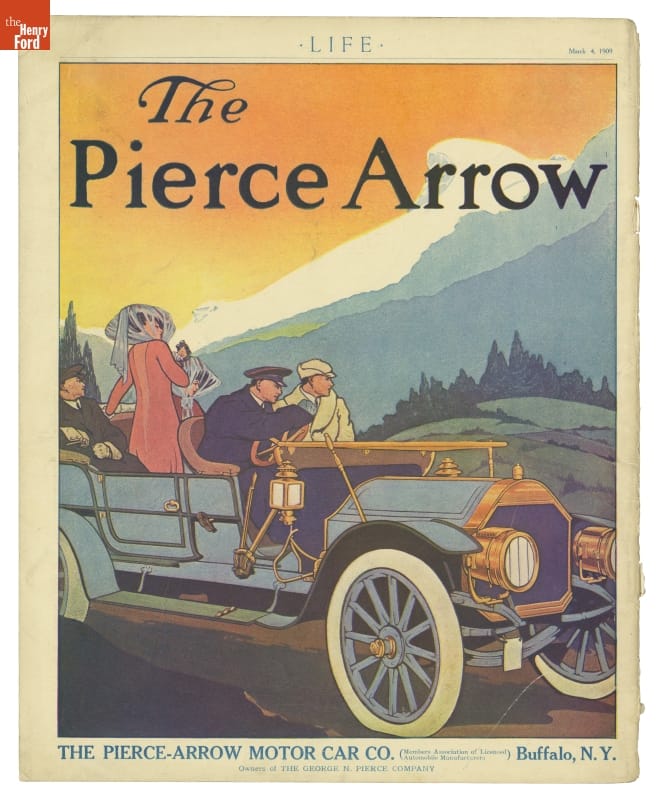 1909 advertisement for the Pierce-Arrow Motor Car, an automobile geared to wealthy motorists who could afford to have a chauffeur handle the driving for them. / THF88377

Most railroad managers were complacent, agreeing with one claim that “the fad of automobile riding will gradually wear off and the time will soon be here when a very large part of the people will cease to think of automobile rides.” But, as it turned out, the public passion for automobile riding did not wear off. Increasingly, Americans from all walks of life embraced automobiles and their advantages over railroads. By 1910, more than 468,000 motor vehicles had been registered in the United States.

Automobiles would have not achieved the level of popularity that they did without major advancements in the roads on which they traveled. As far back as the 1890s, bicyclists and early motorists had tried to alert the public to, and lobby the government for, better roads—roads that the railroads had ironically either replaced or rendered unnecessary. 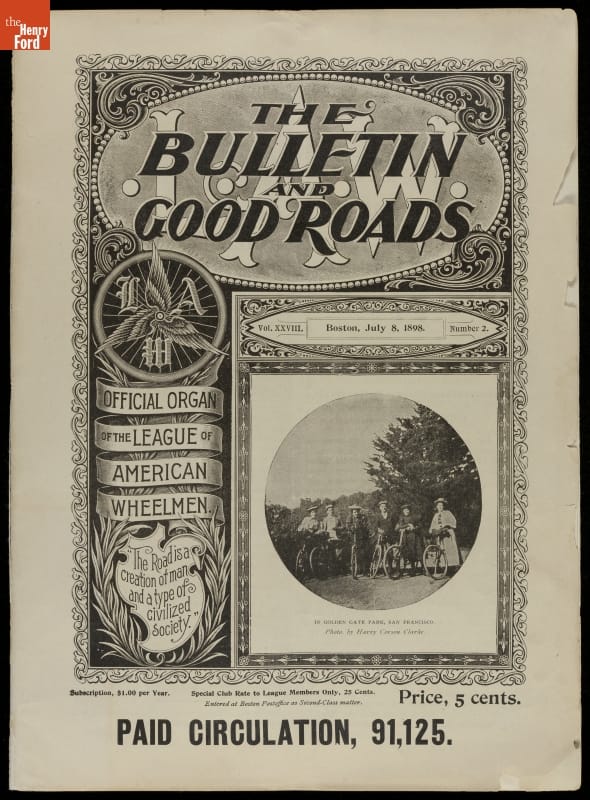 The Bulletin and Good Road, the official organ of the League of American Wheelmen, kept bicyclists up to date on advancements relating to the “Good Roads” movement. / THF207011

One reason that people embraced automobiles was because they revived the promise of individual freedom. Compared with railroad travel, motorists were unhampered, free to follow their own path. Elon Jessup, author of several motor camping books, wrote, “Time and space are at your beck and call, your freedom is complete.” 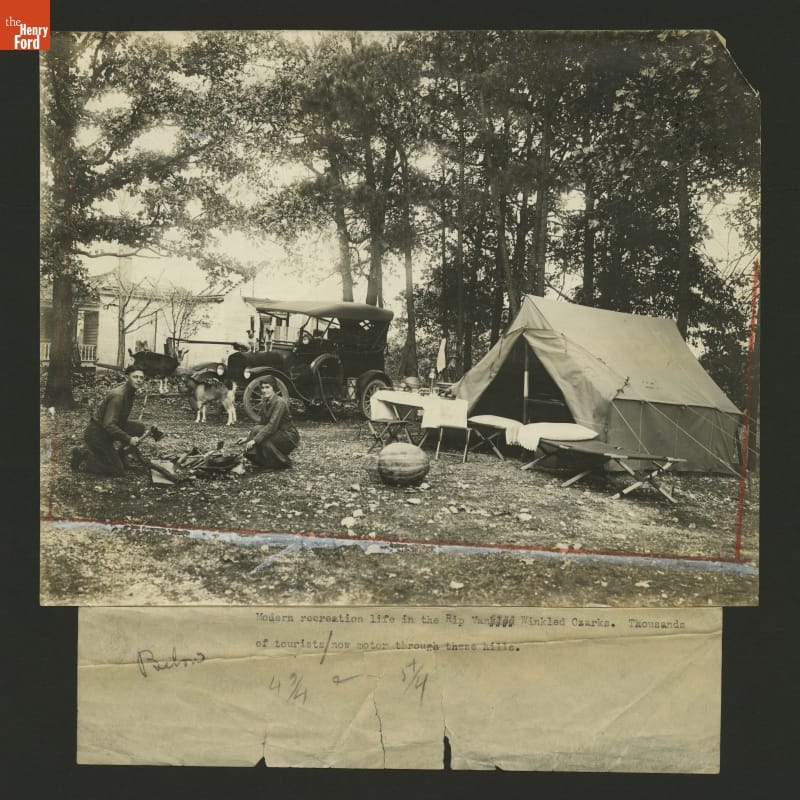 According to a 1910 American Motorist article, no longer were people tied to intercity train schedules, “rushed meals,” and “rude awakenings.” The motorist was “his own station master, engineer, and porter.” Riding in his own “highway Pullman,” he had “no one’s time to make except his own.” Automobile advocate Henry B. Joy wrote in a 1917 Outlook article that motoring promised “freedom from the shackles of the railway timetable.” Automobiles were also considered a particular advantage for women, who were increasingly venturing out into public spaces to shop, work, socialize, and take pleasure trips. 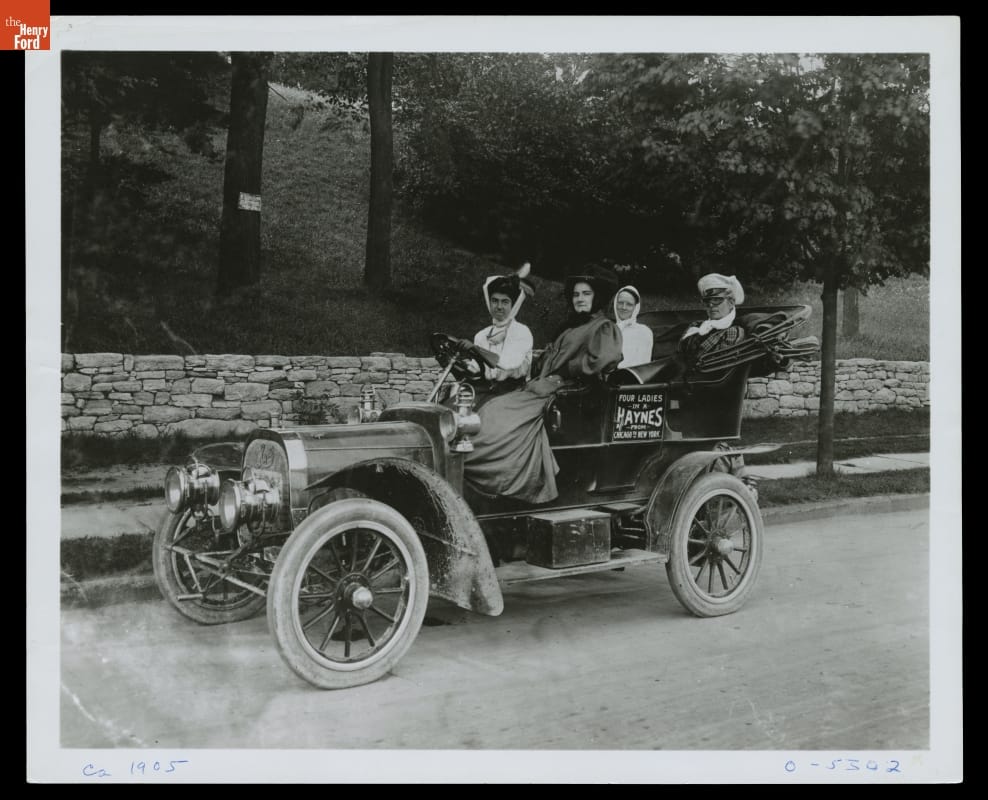 In addition to restoring people’s personal control over their own time, automobiles succeeded in slowing down the fast pace of modern life. Early automobile advocates claimed that railroads were simply too fast. Elon Jessup, in his 1921 book, The Motor Camping Book, described the view from the train as “a blur.” In his 1928 book, Better Country, nature writer Dallas Lore Sharp remarked that railroads rushed “blindly along iron rails” in their “mad dash across the night,” offering passengers only “fleeting impressions.” Automobiles, on the other hand, promised a nostalgic return to a slower time. Harkening back to the “simpler” days of stagecoach and carriage travel, automobiles were “refreshingly regressive.” Instead of being rushed along by “printed schedules and clock-toting conductors,” motorists could stop and start whenever they wanted, or when natural obstacles intervened. A car trip was leisurely, allowing heightened attention to regional variation and uniqueness. 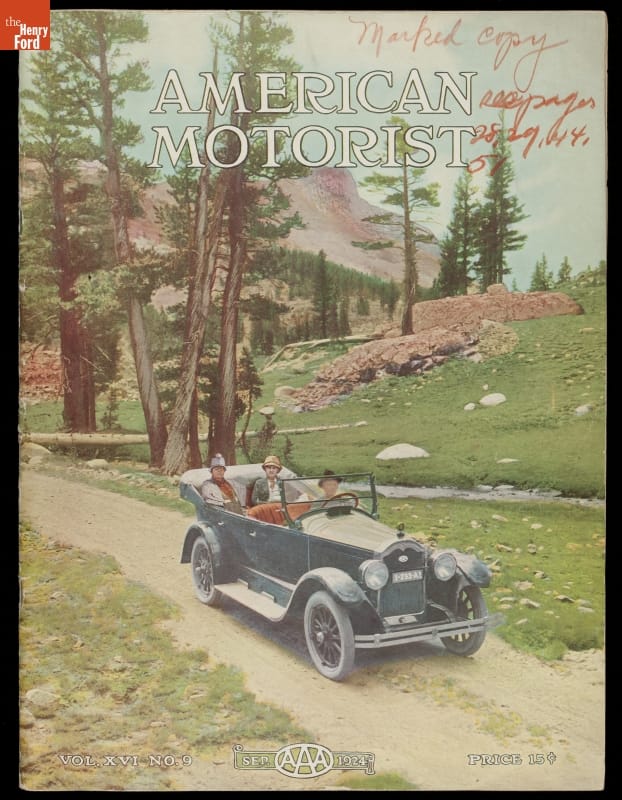 Motorists take a leisurely drive through the countryside on the cover of this September 1924 American Motorist magazine. / THF202475

All told, the automobile liberated the individual who “hated alarm clocks” and “the faces of the conductor who twice daily punched his ticket on the suburban train.” In his 1928 book, Dallas Sharp even claimed that motoring was, in fact, more patriotic than railroad travel because it encouraged people to enjoy the country “quietly” and “sanely.” As a result, the slower tempo of automobile travel was thought to be restorative to frayed nerves brought on by the increasingly hectic pace of life in an urban, industrial society.

No automobile had more impact on the American public than the Model T, introduced in 1908. Envisioned by Henry Ford as a car for “the great multitude,” the Model T was indeed “everyman’s car”—sturdy, versatile, thrifty, and powerful. While Model Ts sold well from the beginning, the low price, extensive dealer network, and easy availability of replacement parts led to a leap in Model T sales after World War I. 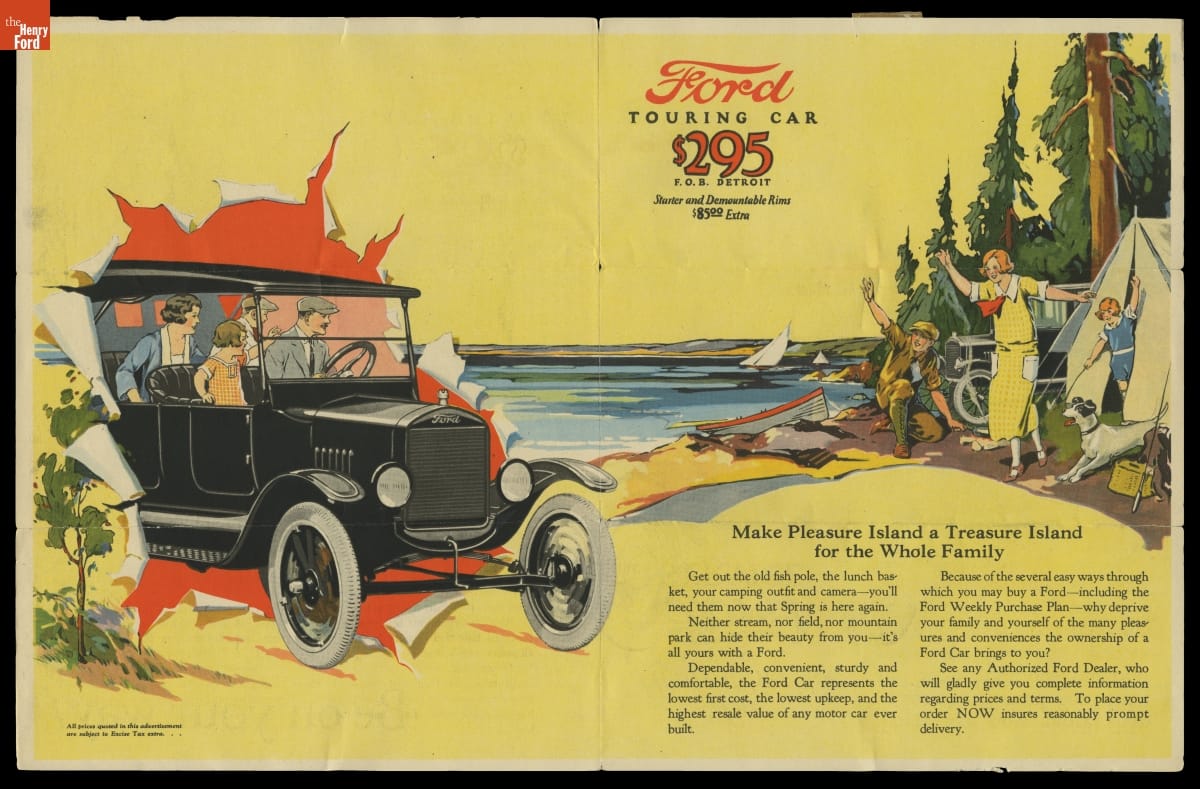 Brochure for the 1924 Ford Model T, promoting its use as a vehicle for family pleasure trips. / THF107809

The need and demand for better roads corresponded with the unprecedented rise in Model T sales. The first and most widely publicized of the new, independently funded cross-country highways was the Lincoln Highway (1912), which ran (at least on paper) between New York City and San Francisco, California. In 1916—ironically, the same year that national railroad mileage reached a peak—the U.S. government passed the Federal Aid Road Act, providing grants-in-aid to several states to fund road improvement. The railroad companies watched helplessly as the government subsidized improved roads that extended to villages and hamlets the railroads could never hope to reach. 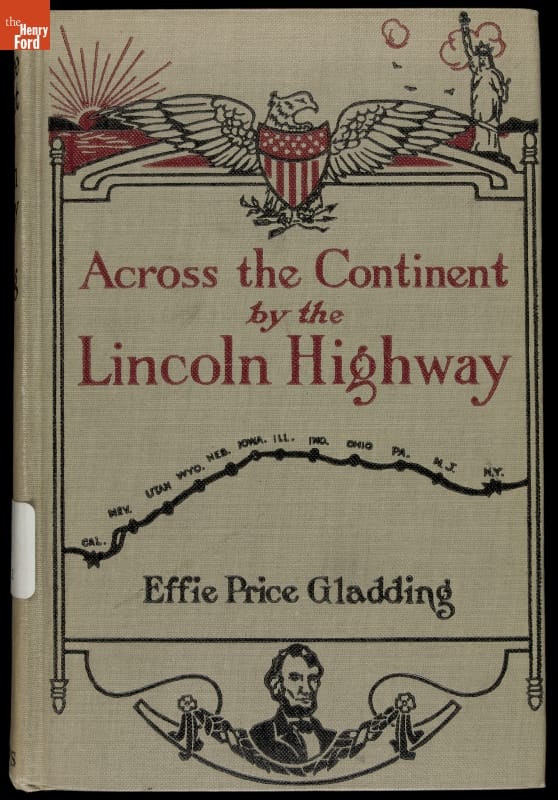 Effie Price Gladding recounts her cross-country trip on the Lincoln Highway in this 1915 book. The cover points out the states she passed through along the route of this highway. / THF204498

By the end of the 1920s, due in large part to the unprecedented popularity of the Model T, automobiles had gained a “vice-like grip on the American psyche.” Total car sales had leaped from 3.3 million in 1916 to 23 million by the late 1920s. Motorists were not only opting to take cars rather than trains for their regular travel routines, but they were also beginning to take longer-distance trips than they had ever attempted before. As the 1920s closed, Americans were traveling five times farther in cars than in trains. Enthusiasm for the automobile remained high throughout the Great Depression of the 1930s, when massive new road and highway construction projects were initiated to stimulate employment. 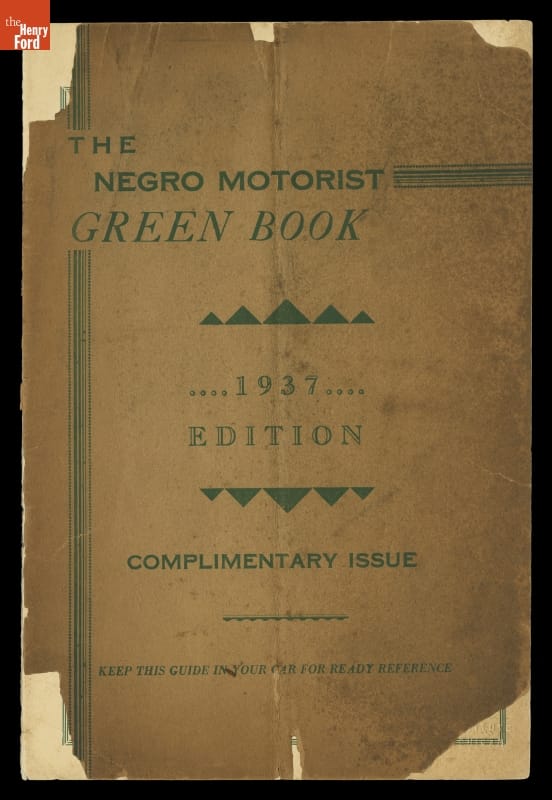 Black Americans embraced automobiles to avoid discrimination and humiliation on public transportation—at least until they had to stop to eat, sleep, and fill up with gas. Beginning in 1936, the Negro Motorist Green Book listed “safe places” for Black motorists to stop in towns and cities across the country. / THF99195

Conversely, the Depression was devastating for the railroad companies, who abandoned a record number of miles of existing track during this decade. By the late 1930s, railroad companies were optimistically attempting to revive business by embracing modern new streamlined designs, which claimed to reflect aerodynamic principles and promised a smooth ride incorporating the latest standards of comfort and convenience. A new emphasis on speed led to numerous record-breaking runs.

For its speed, as well as its beauty, comfort, and convenience, the Wabash Railroad’s “Blue Bird Streamliner” of 1950 was touted as “The Most Modern Train in America.” / THF99239

After World War II, the lifting of wartime rationing, the inclusion of two-week paid vacations in most labor union contracts, pent-up demand for consumer goods, and general postwar affluence ensured the automobile industry “banner sales,” which lasted into the 1950s.

Travel brochures like this one abounded after World War II, appealing to family vacationers. / THF202155 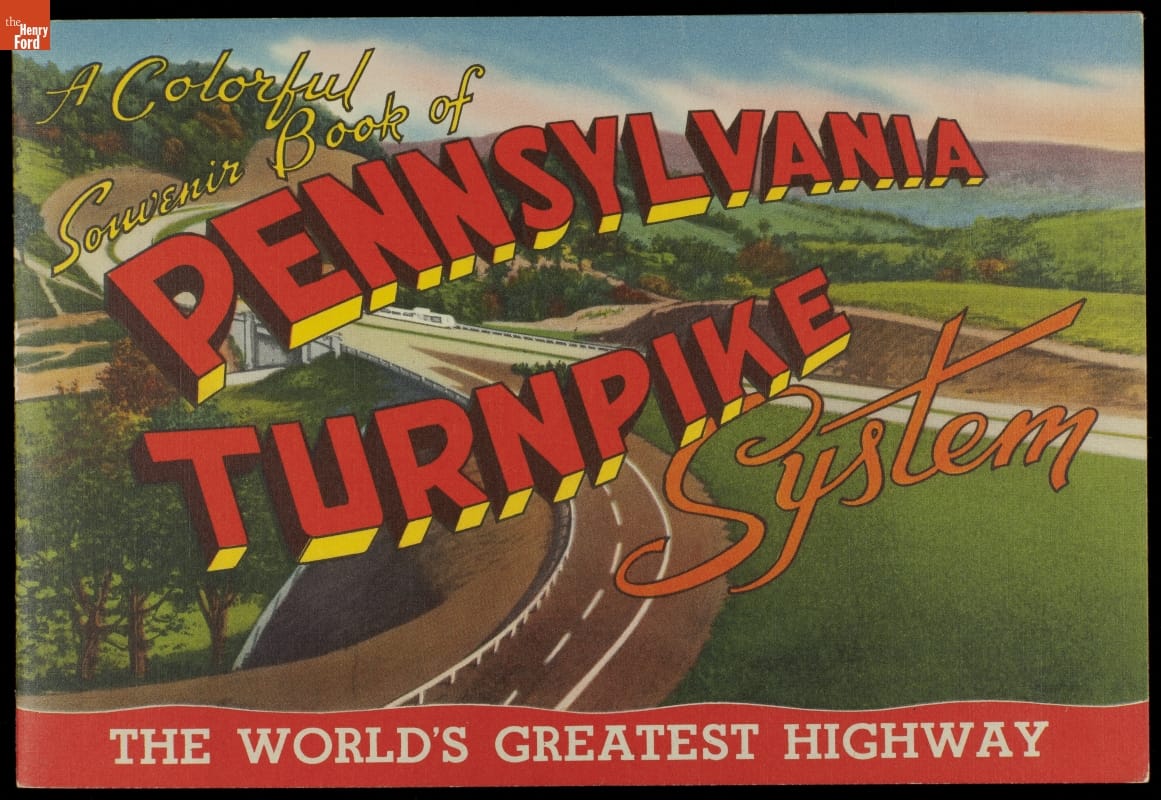 But the U.S. government’s long-time obsession with highway improvement truly reached a “dizzying crescendo” in 1956, with the passage of the Federal Aid Highway Act. This Act called for 46,000 miles of state-of-the-art, limited-access superhighways, to be funded by public taxes on fuel, tires, trucks, buses, and trailers. Although justified for military and national defense purposes, the interstate highway system made it possible for average citizens to reach their destinations faster in their cars than by taking trains.

Although the new urban expressways were promoted as modern advantages, as seen in this 1955 “Auto-Owners Expressway Map” for the Detroit area, in fact, these same expressways cut through and often devastated poor and historically marginalized communities. / THF205968

Ironically, as automobiles became the standard vehicle for long-distance transportation, and highways beckoned motorists with higher speed limits and improved surfaces, the slow, leisurely pace of motoring—so lauded 50 years earlier—had transformed into an outpacing of even the “blurring” speed of railroads. 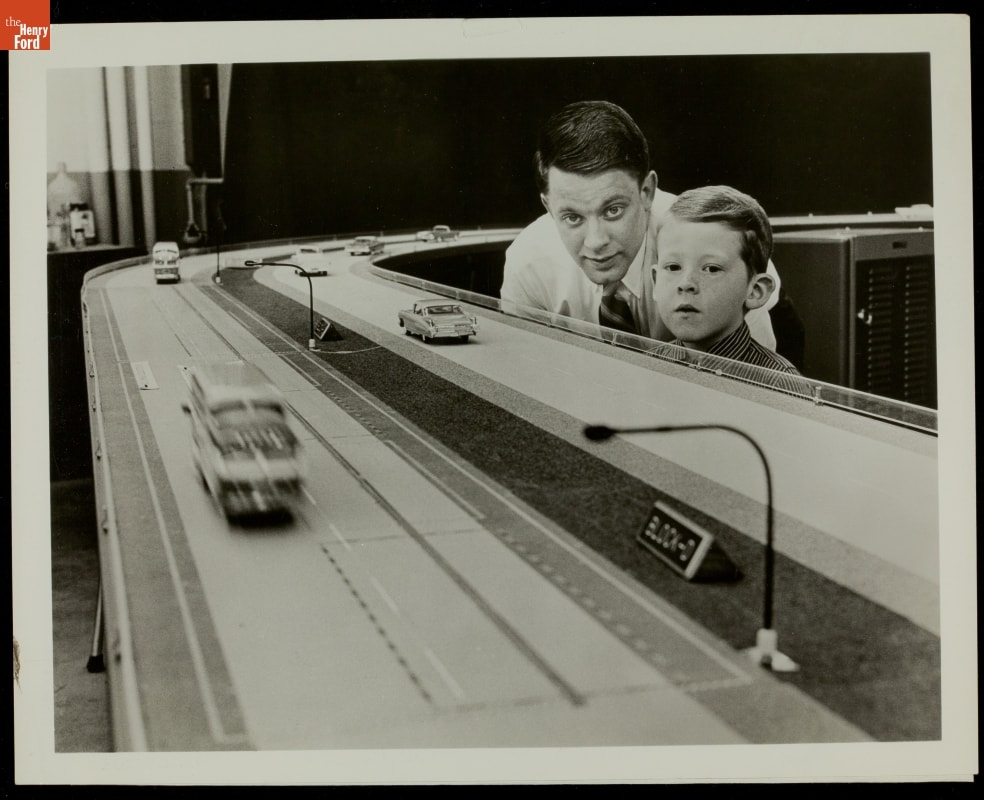 The wonder of the fast and efficient new expressways is evident in the child’s expression in this 1959 promotional photograph, as he views a futuristic model highway envisioned by researchers at General Motors. / THF200901

For the most part, travelers rejoiced as four-lane divided highways replaced the older two-lane highways. With the new speed and comfort features of cars and improved highways, the impulse toward getting somewhere as rapidly and efficiently as possible, along the straightest path, became the new end goal.

Donna R. Braden is Senior Curator and Curator of Public Life at The Henry Ford. This blog post is adapted from her M.A. Thesis, “American Dreams and Railroad Schemes: Cultural Values and Early-Twentieth-Century Promotional Strategies of the Wabash Railroad Company” (University of Michigan-Dearborn, 2013).