Designed (and Drawn) to Build 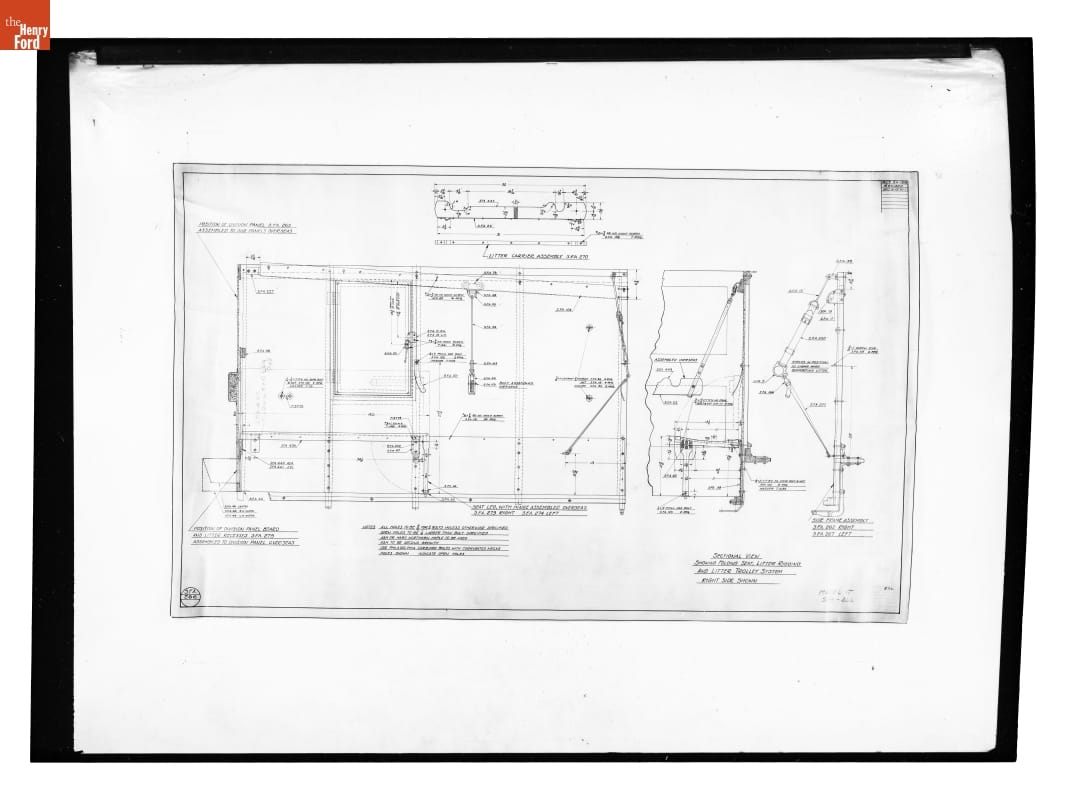 As you might expect, a car company with as long a life and as many different vehicles in production at various times as Ford Motor Company needed to document down to individual nuts and bolts each part of each vehicle. Over the 50 years between 1903 and 1957, Ford produced more than one million parts drawings, a comprehensive microfiche set of which now reside in The Henry Ford’s Benson Ford Research Center. We’ve just digitized several hundred of these parts drawings, including a couple dozen, like this one, that cover Model T ambulances built by Ford to be used during World War I.

One of the most dramatic displays in Henry Ford Museum is the “exploded” Model T—a 1924 Model T touring car with its constituent parts suspended by wires. Located at the entrance to the Made in America exhibition, it invites visitors to take a different look at an iconic American product.

Henry Ford’s Model T automobile is one of the most significant technological devices of the 20th century. Its clever engineering and low price allowed it to do what could only be done once—make the automobile widely popular. The Model T spawned mass automobility, altering our living patterns, our leisure activities, our landscape, even our atmosphere. The Model T’s influence is so pervasive and lasting that even people who know little about old cars or automotive history know the name “Model T.”

But the way the Model T was produced is as iconic as the car itself. When Ford Motor Company introduced the Model T in October 1908, firearms, watches, and sewing machines were already being assembled from interchangeable parts made on specialized machines. Ford successfully adapted these techniques to the much more complex automobile, and then crowned this achievement with the development of the moving assembly line in late 1913. Continue Reading

Henry Ford Seen through the Lens of Our Collections, 150 Years Later

This year we're proud to celebrate what would have been the 150th birthday of our institute's founder, Henry Ford. Throughout the year we'll be sharing content and stories here on The Henry Ford's blog about one of America's greatest innovators.

At The Henry Ford, we often think and talk about Henry Ford, our institution’s founder. This is particularly true this year, which marks 150 years since Henry Ford was born. To commemorate this major milestone, we wanted to tackle a digitization project in Henry’s honor.

When it comes to our Henry Ford–related collections, the problem is narrowing down our vast holdings on all of Henry’s interests, activities, and businesses. A team of curators and educators from The Henry Ford had a series of meetings and discussions earlier this year, and came up with 17 topics that represent major themes in Henry’s life. After that, they made selections from our collections that best represent each of those themes. Their selections have now been digitized and are up on our collections website for anyone to browse.

The thing most identified with Henry Ford is the Model T, a car introduced in 1908 that was reasonably priced, reliable, and effective on the bad roads of the day. Three sets of collections items help tell this story. On the Way to the Model T shares some artifacts that show how Henry’s career progressed, such as the 1896 Quadricycle, the first car Henry ever built, and a 1901 photograph showing the race (featured above) that helped Henry gain notoriety and financial backing for his auto ventures. The Model T set shows a few of the Model T’s in the collections of the Henry Ford, including an early 1909 version, and also shows how quickly the Model T was assimilated into all aspects of daily life, from rural families to ingenious work applications. Post-Model T covers many of Henry’s business activities following the Model T, including the introduction of the V-8 engine and war production at Willow Run.

There was more to Henry Ford and Ford Motor Company than the Model T. A set represents the Assembly Line, from early inspirations for the idea (such as this slaughterhouse line) through many gradual refinements to the system, and another tackles the related $5 Day, which Ford implemented to win over critics of the assembly line system, like this outraged wife of a line worker. Two sets cover some of Ford’s non-automobile output: Tractors, including this experimental model from 1907 and the first production model of the popular Fordson tractor from a decade later; and Aviation, from the Ford Tri-Motor to the radio beacon.

One thing that makes Henry Ford such a fascinating figure 150 years after his birth was his wide breadth of interests, many of which tied back to his business activities. A set explores Henry’s interest in Soybeans, from an extremely dramatic presentation of the strength of soy plastics to photos of his working Soybean Laboratory in Greenfield Village (which still stands, now displaying agricultural artifacts). Another set discusses participation by Henry and the Ford Motor Company in various World’s Fairs, from the massive edifices erected to the exhibits inside.

A set on Village Industries, Henry Ford’s vision for small factories set in rural locations, shows the geographic coverage of these plants and also covers individual plants such as Nankin Mills. Another of Henry’s lifelong interests was social engineering, as demonstrated by the Sociological Department he established at Ford Motor Company. This is a story also covered on our website; the collections set we’ve created supplements the story with some of the statistics Ford collected on its employees and photographs taken during visits to employee homes.

Some of the sets give you a deeper glimpse into Henry’s life. A set covering his Youth demonstrates that from an early age Henry showed a fascination with both the mechanical and the natural world. His love of nature would persist and can later be seen in his frequent camping trips; a set on the Vagabonds, as he and his comrades called themselves, covers both stereotypical camping activities and objects that might lead one to suspect the Vagabonds were not exactly roughing it, like a photo of their extensive entourage.

Not everything Henry did was a success. A set on his Failures covers some of the areas where Henry struggled, such as the Detroit Automobile Company and the Ford X-8 engine. Conversely, if you want to know where Henry got inspiration, check out some of his Heroes, from his mother to William Holmes McGuffey to Thomas Edison. To see Henry’s likeness captured at various seminal points in his life, from his teenage years through his final decade, check out our set of Portraits.

Finally, no review of our Henry Ford collections would be complete if we didn’t talk about ourselves just a bit. You can get a concise story of the founding of The Henry Ford, aka the Edison Institute, on our website, but we have now created a set of collections items related to the Founding of the Edison Institute as well. From the construction of the Museum building to our cornerstone, inscribed by Thomas Edison himself, these artifacts will give you a glimpse into the early days of The Henry Ford.

Check out all our Henry Ford collections sets via the list below and let us know what you think!

Ellice Engdahl, Digital Collections & Content Manager at The Henry Ford, wishes Henry a happy 150th and thanks him kindly for founding this amazing collection.