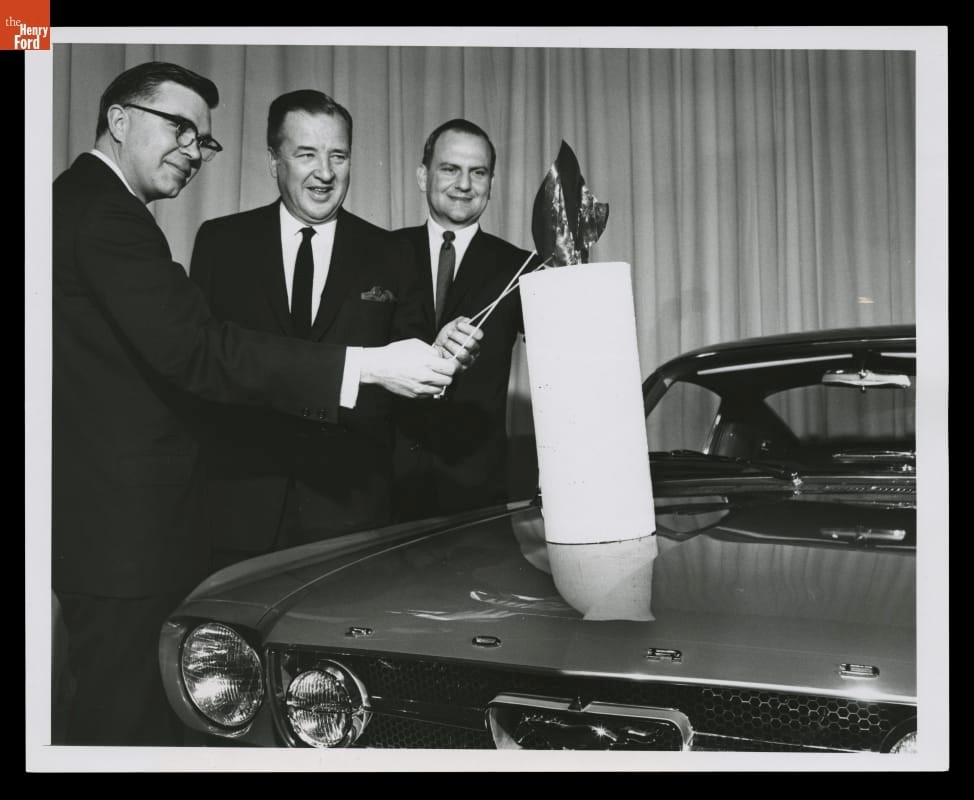 A Born Salesman
Lee Iacocca, the charismatic corporate executive whose long careers at Ford and Chrysler made him one of the best-known businessmen in America, passed away on July 2 at age 94. With his passing, the automotive industry lost one of its most colorful figures of the last 60 years.

Born and raised in Allentown, Penn., Iacocca earned a degree in industrial engineering from Lehigh University in 1945. Given his location, one might have expected him to take a job in the steel industry. But Iacocca was one of those people with gasoline in the veins. He wanted to build cars – specifically, he wanted to build them for Ford Motor Company. He joined the Blue Oval in 1946 as an engineer. But for a born salesman like Iacocca, it was an awkward fit at best. He asked for a reassignment to sales in Ford’s Philadelphia district, and his career blossomed from there.

Iacocca first attracted attention from senior Ford managers with a novel promotion in the mid-1950s. He dreamed up a “’56 for 56” gimmick in which customers could buy a new 1956 Ford with 20 percent down and monthly payments of $56 thereafter. It was simple, it was catchy, and it was a hit. The promotion earned him a transfer to Ford’s world headquarters in Dearborn.

Total Performance
Lee Iacocca made no small plans. Barely into his 30s when he moved to Dearborn, Iacocca resolved that he’d be a Ford vice president by age 35. Though he climbed up the ranks quickly, he missed his goal – Iacocca wasn’t named Vice President and General Manager of the Ford Division until he’d turned 36. By a twist of fate, Ford President Robert McNamara left to become President Kennedy’s Secretary of Defense soon after Iacocca’s appointment. Iacocca’s influence at Ford Motor Company increased accordingly.

Young, enthusiastic, and a car guy to the core, Iacocca was the polar opposite of McNamara, whose major accomplishments at Ford included turning the sensuous two-seat Thunderbird into a four-seat family sedan. (Though to be fair, McNamara nearly doubled Thunderbird’s sales as a result.) Iacocca wanted his company to think young. He remembered the Ford V-8 of his own youth which, with help from legions of hot rodders, gave Ford a performance image. Chevrolet snatched that image in the mid-1950s with its small-block V-8 and its classic “Tri Five” Chevys of 1955-57. 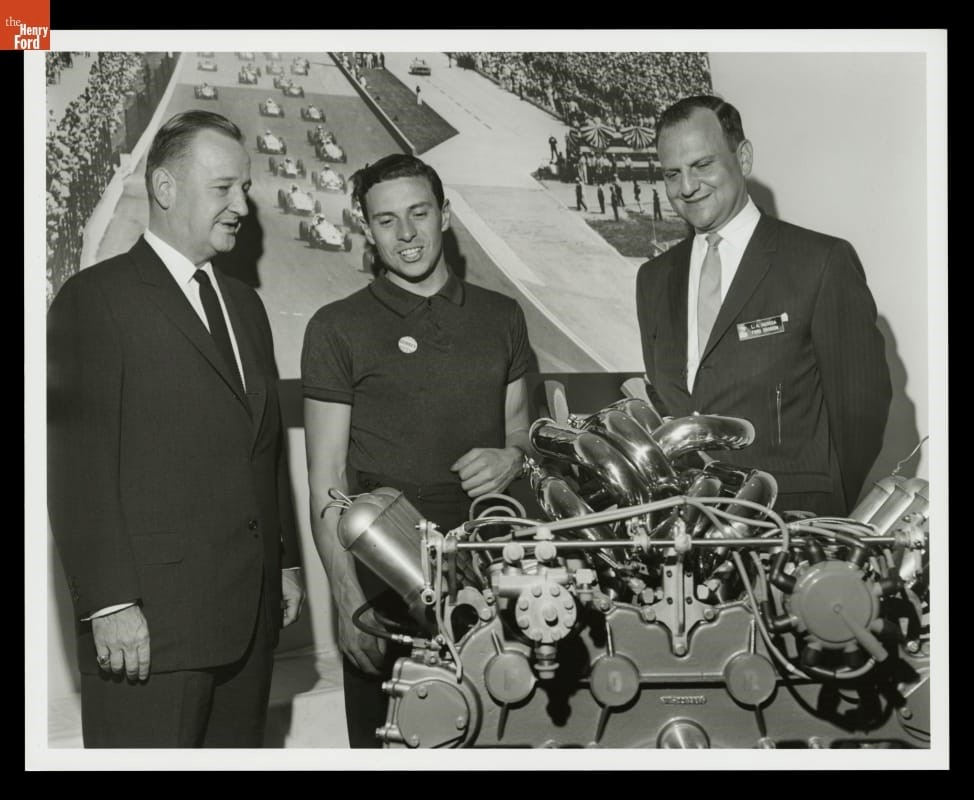 Among Iacocca’s first moves were to get Ford Motor Company back into racing. He greenlit a striking mid-engine sports car prototype and then – with Henry Ford II, Leo Beebe, Carroll Shelby, Jacque Passino, and others – launched an all-out assault in nearly every form of racing under the banner “Total Performance.” By decade’s end, Ford had racked up victories in NASCAR, on drag strips, at Indianapolis, and at Le Mans. But Iacocca’s tenure at Ford is forever tied to one car.

The Youth Car
Working in secret with a select team, Iacocca pitched the need for a “youth car” targeted at the up-and-coming Baby Boomers. He wanted something with the appeal of a Thunderbird, the look of a Ferrari, and the economy of a Volkswagen – a tall order to be sure. But Ford’s designers and engineers rose to the challenge. In one of the automotive industry’s great triumphs, they put a sporty body on the existing Ford Falcon compact car chassis, produced a seemingly endless menu of options and accessories that encouraged customers to personalize, and dubbed their new creation “Mustang” – a name that evoked freedom, open spaces, and, in the words of one marketing expert, “was American as all hell.”

Ford optimistically hoped to sell 200,000 Mustangs in the first model year. But the car’s splashy launch – at the 1964 New York World’s Fair – and a savvy marketing campaign kicked off a mania rarely seen in automotive showrooms. By the end of the 1965 model year, more than 680,000 buyers had taken a new Mustang home.

Mustang’s success made Iacocca a household name. But his rising star contributed to growing tensions between Iacocca and Henry Ford II, the company’s chairman and ultimate authority. After several difficult years, their strained relationship foundered and, in 1978, led to an acrimonious parting of the ways between Iacocca and Ford Motor Company. 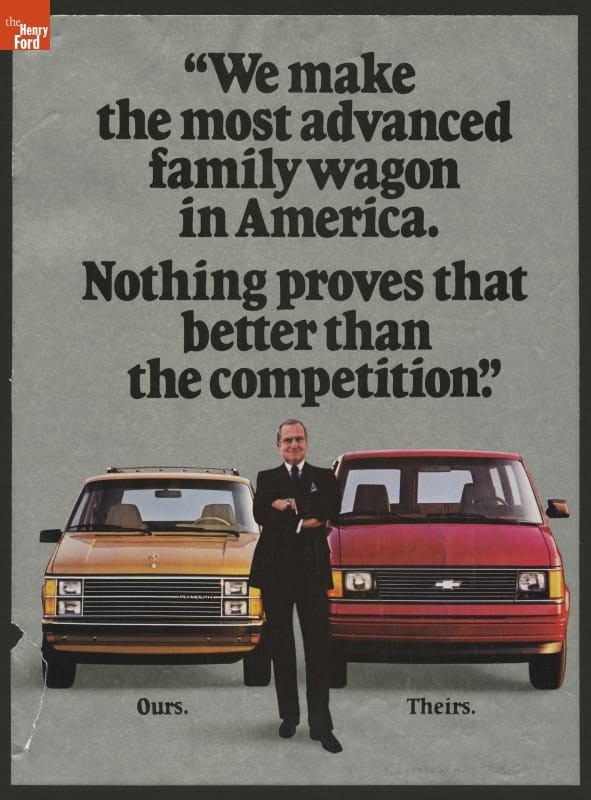 Iacocca found the perfect pitchman for Chrysler – himself. His print and television ads made him one of the best-known business figures in the United States. (THF103024)

A Second Act
No one could have blamed Iacocca if he’d retired then and there. The Mustang alone was enough to secure his legacy. But retirement wasn’t Iacocca’s style. He missed being at the center of the action. When the failing Chrysler Corporation offered him the job of CEO, he couldn’t resist. Iacocca’s second act was even more impressive than his first.

Iacocca took over a company in ruin. Chrysler was losing millions with little hope of recovery. His first and most important act was to secure a loan guarantee from the U.S. Congress. He then set about rebuilding the automaker’s product line. First came the K-Car, a highly-adaptable front-wheel drive platform that Chrysler offered under any number of makes, models and designs. Then came another vehicle that, like the Mustang before it, transformed the industry. The minivan, manifested in the Plymouth Voyager and the Dodge Caravan, was born of an idea Iacocca had toyed with at Ford to no avail. At Chrysler, the innovative minivan became a best-seller that redefined the family car for a generation of Americans. To top off his achievements, Iacocca added an evergreen marque to Chrysler’s lineup when he acquired American Motors and its enduring Jeep brand in 1987.

Eager to restore faith in Chrysler vehicles, Iacocca personally vouched for his products in a series of memorable television and print ads. He ended many of them with a simple, straightforward challenge to his audience: “If you can find a better car, buy it.” The ads were effective, and he enjoyed making them. In truth, he enjoyed the limelight. Through the 1980s, Iacocca added to his celebrity by writing two best-selling books, leading a successful effort to restore the Statue of Liberty, and appearing in a bit part on the popular TV series Miami Vice. For a time, there was even serious talk about Iacocca as a candidate for President of the United States.

Enough for Two Lifetimes
Iacocca retired from Chrysler in 1992. He’d returned the company to profitability, restored its reputation, and repaid its government loan. But even then he didn’t really retire. With billionaire Las Vegas developer Kirk Kerkorian, Iacocca launched an unsuccessful takeover attempt of Chrysler in 1995. Ten years later, he returned to Chrysler – by then under German ownership as DaimlerChrysler – to shoot a few commercials, reprising his trademark “If you can find a better car…” slogan.

Lee Iacocca seemed to live two lifetimes in his 94 years. He enjoyed success at two car companies, and he fathered two groundbreaking vehicles. Iacocca lived to see the Mustang turn 50, and to see Chrysler fall into bankruptcy once more before remerging as a part of FCA. He will be remembered as long as there are people who love cars like he did.