Cleaning artifacts is an everyday occurrence here at The Henry Ford’s conservation department, as anyone who has ever looked into the windows of the lab at the back of Henry Ford Museum of American Innovation knows. Still, it is not every day that stored paintings can be brought into the lab in view of guests to have detailed cleaning and preservation work done. Thanks to Susan and Henry Fradkin, with additional funds from The American Folk Art Society, that is changing this summer, as we address some of the folk art paintings from our sizeable collection.

The first painting to be selected for this project was an oil painting dating from the 1830s–1840s. The artist is unknown, but an inscription on the back of the painting notes that this is a portrait of “Sarah ... at age 4.” This painting was very dirty and yellowed with age. The paint layers were also unstable with some losses in the background. “Sarah” had been conserved in the late 1960s but needed more attention.

After examining the painting, the first steps in the conservation plan were to remove it from its frame and take the canvas off its stretcher, due to distortions from a previous wax-lining. 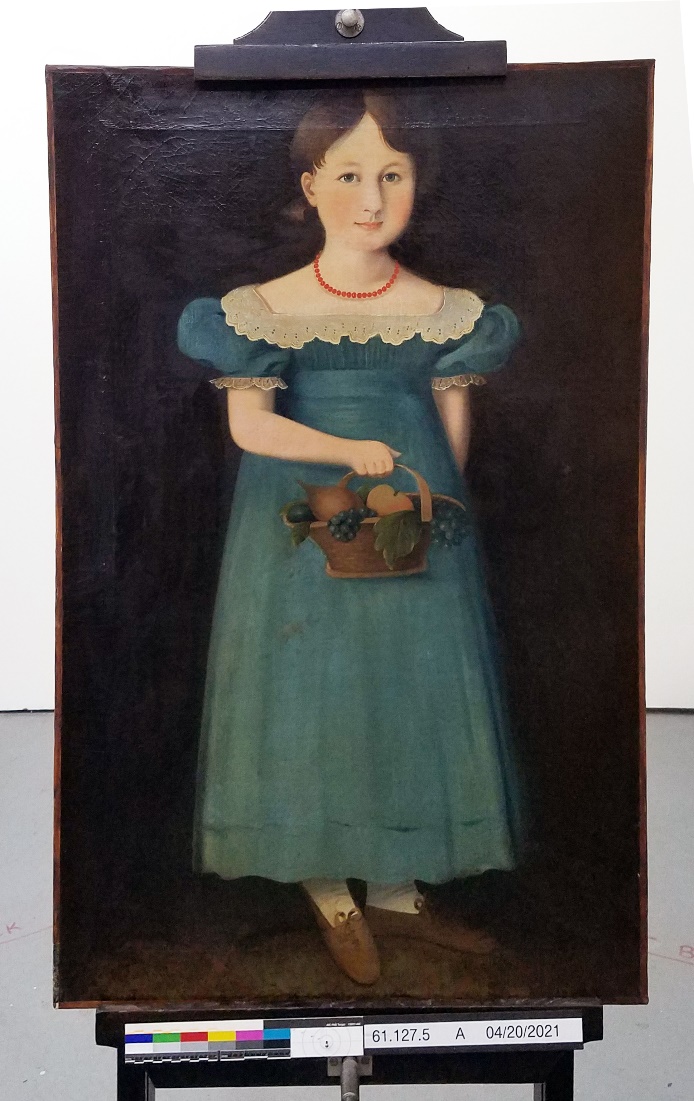 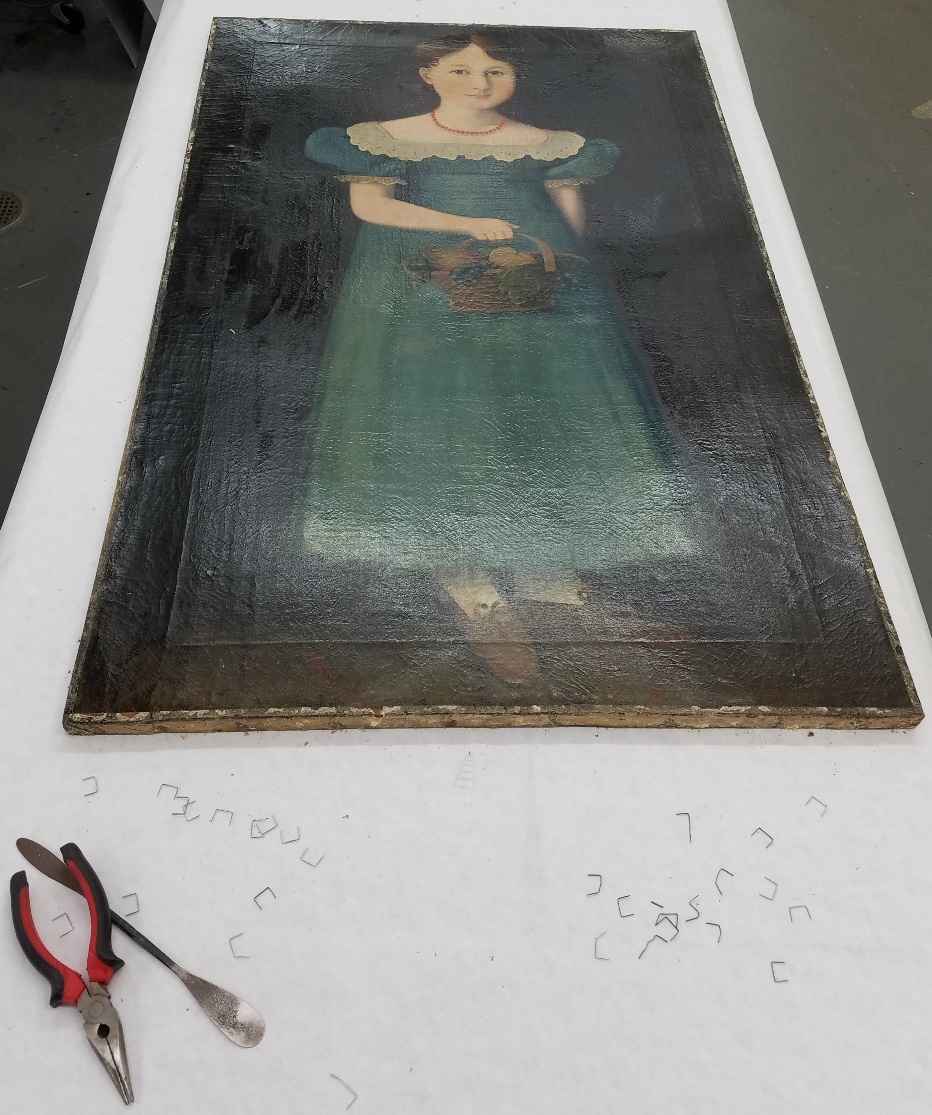 Removing the staples to take the painting off the stretcher.

Several areas of the painting had flaking and paint losses. To safely move forward with the rest of the conservation, it was necessary to consolidate those areas to ensure no further loss of paint. This was done by removing some of the excess wax on the reverse used to line the painting to a supporting piece of fabric. Wax-lining of paintings was previously used to preserve paintings, but is no longer the accepted technique due to the tendency of the wax to physically change the properties of the paint layers. Therefore, the wax on the back of the canvas was heated and carefully scraped off. These bits of wax were then reheated and placed into areas on the painted side of the canvas that had unstable paint layers.

Once the flaking paint was resecured, it was time to start cleaning. Over time, the natural resin varnish on the paint surface had yellowed, which is common with paintings. To reveal the original paint colors, the varnish layer was removed. To better understand what material is being removed from the surface, ultraviolet (UV) light is useful. 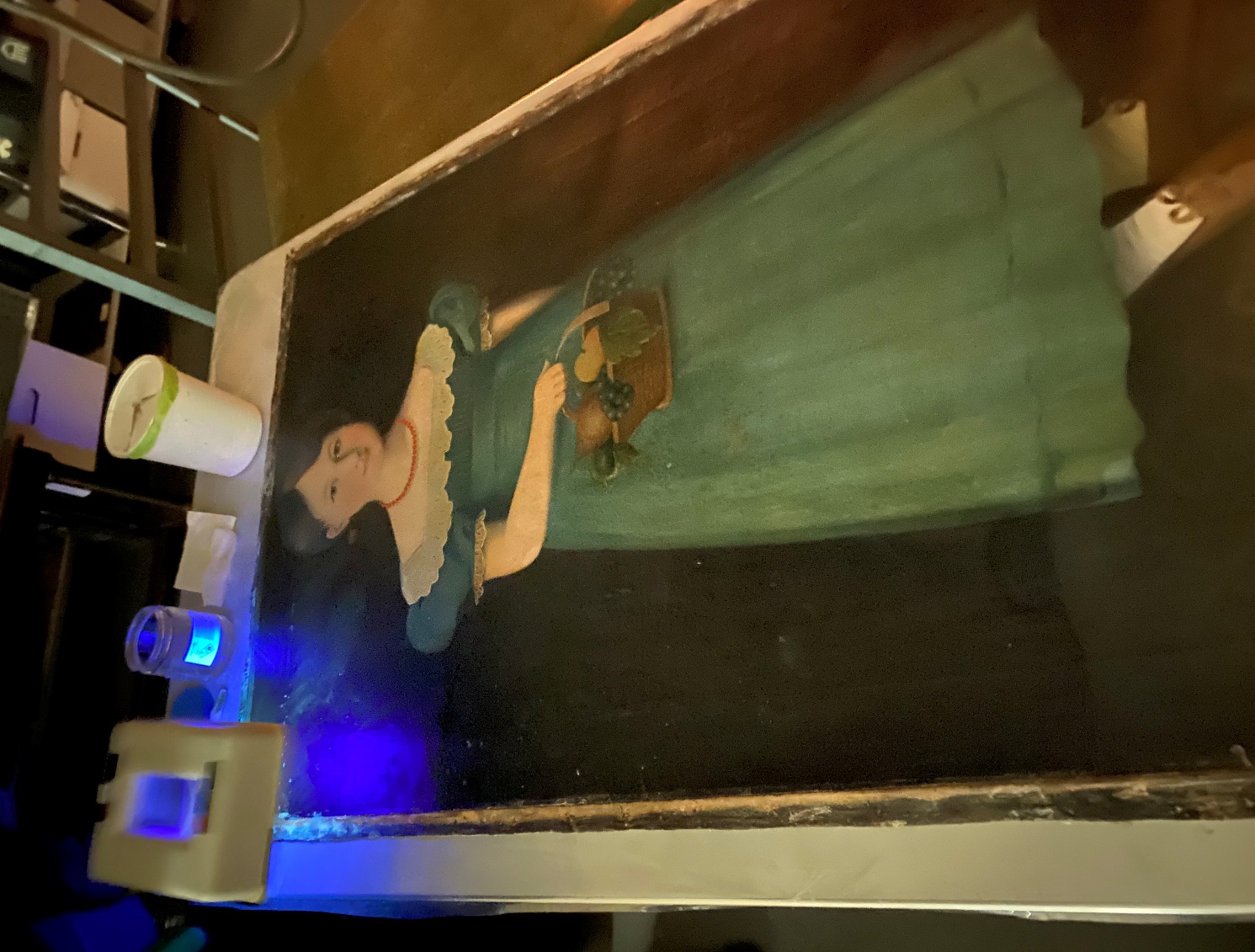 UV light to aid in cleaning.

With the use of UV light, varnish has a fluorescence that is different than the matte appearance of the original paint. The UV light tells conservators how thick a layer of varnish is and when we have successfully removed the varnish and exposed the original paint. UV light also shows distinctions between the original paint used by the artist and paint that was applied later, which appears black. In this case, we found that an area of the dress had been previously fixed after the canvas had torn. 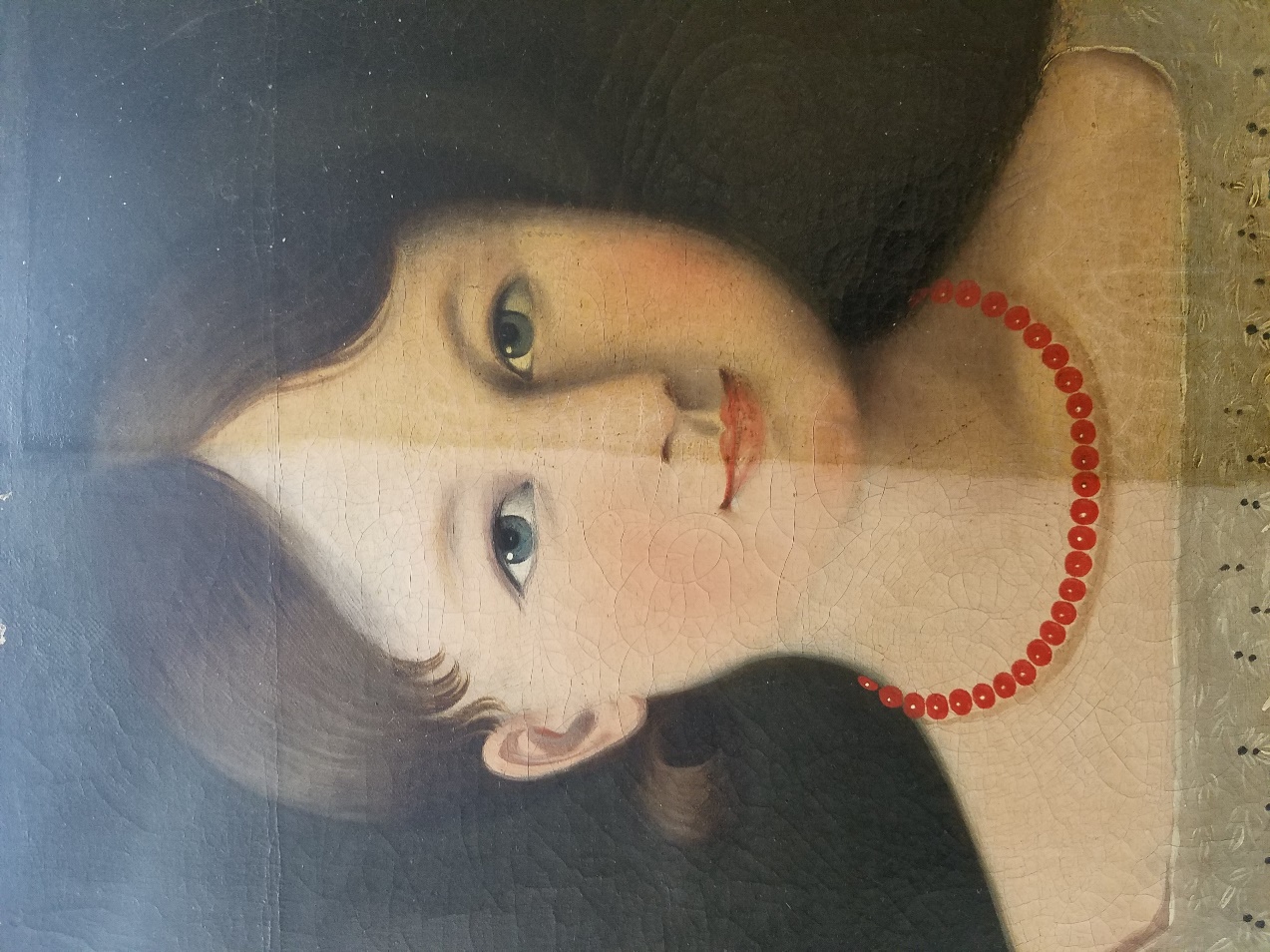 Detail shot showing varnish removed from half of the painting. 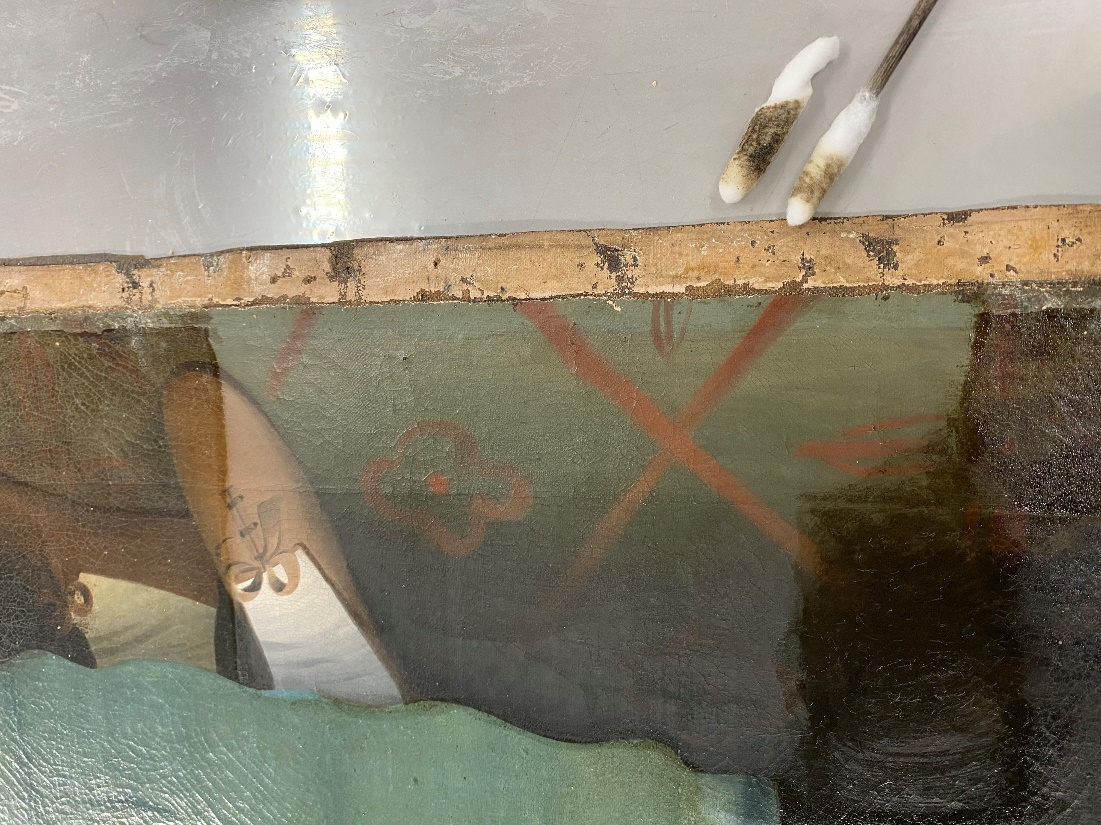 Detail shot of varnish and dirt removal from the floor.

After testing several small areas with various cleaning solvents, we chose the best one for cleaning this painting. During cleaning, the details of the floor popped out, along with “Sarah” appearing much brighter. As the varnish was removed, it also revealed more areas of paint loss that would need inpainting. Before inpainting, we added fills to several areas where there was paint and gesso loss to create an even level when the new paint was applied. 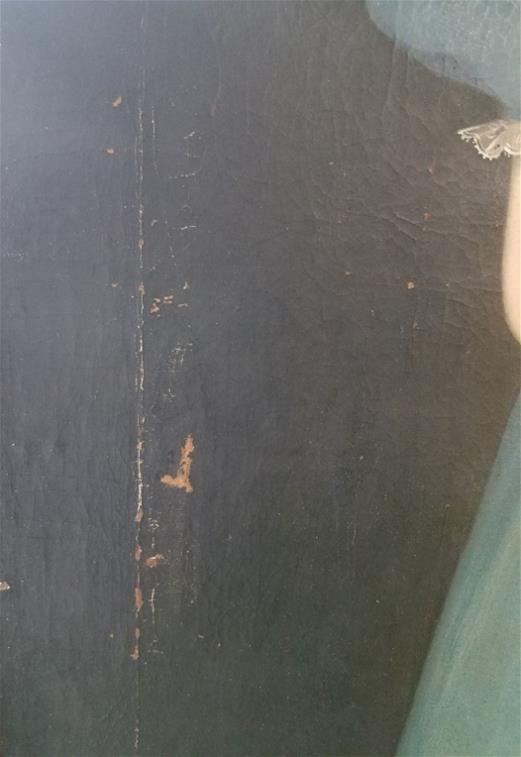 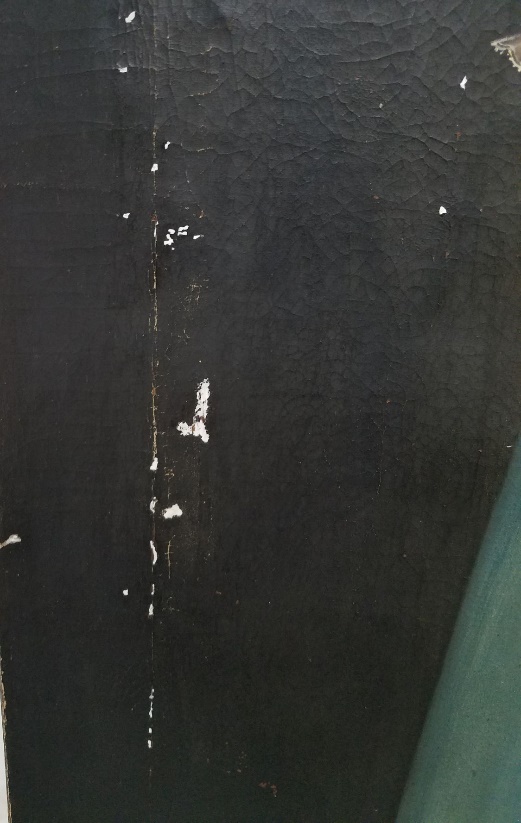 Before and after adding fills to the areas of paint loss.

With the level fills in place, the painting could be re-stretched onto the stretcher before inpainting. Due to short tacking edges on the original canvas and wax-lining, we added new fabric with an adhesive film on all four edges. This process is called strip lining and the use of this extra material (we used sail cloth) helped strengthen the canvas during the re-stretching process. 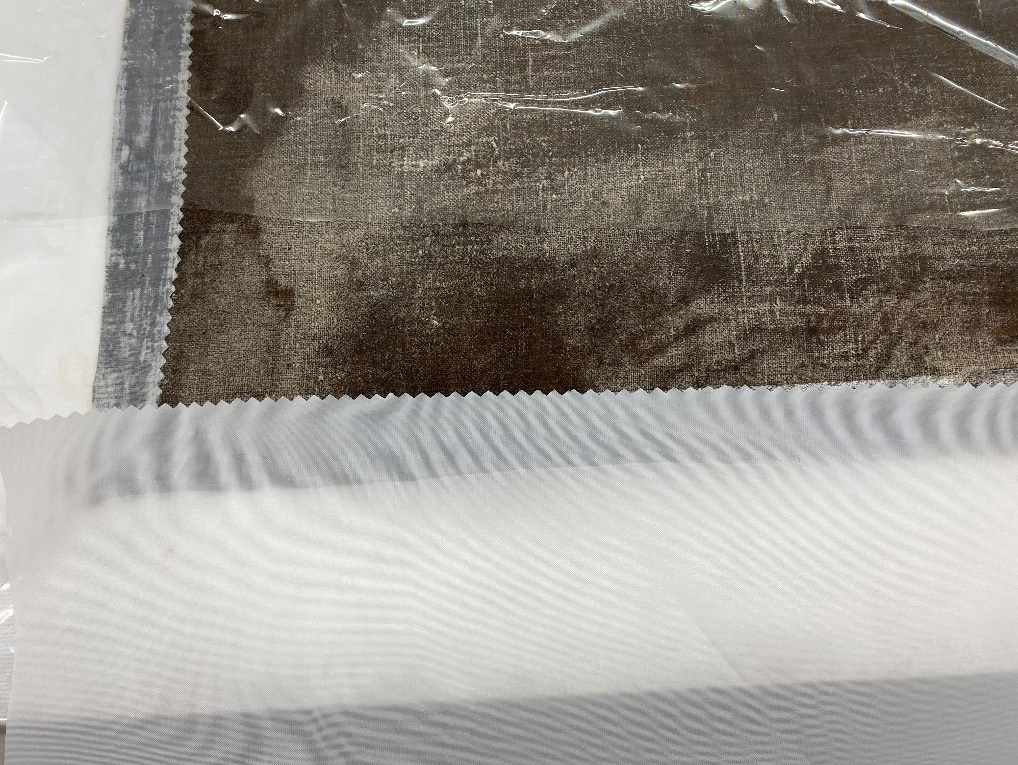 After adding the sail cloth, the material was wrapped around the stretcher, pulled taut with pliers, and heated to stay in place. After securing it to the back of the stretcher, extra sail cloth was cut away. 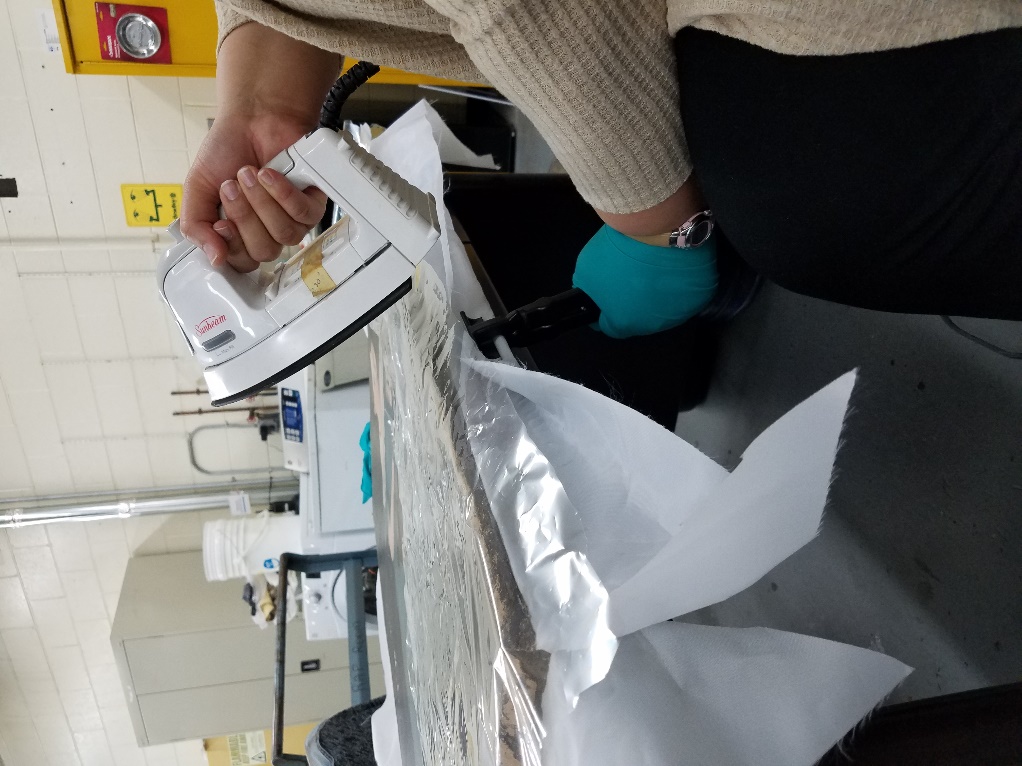 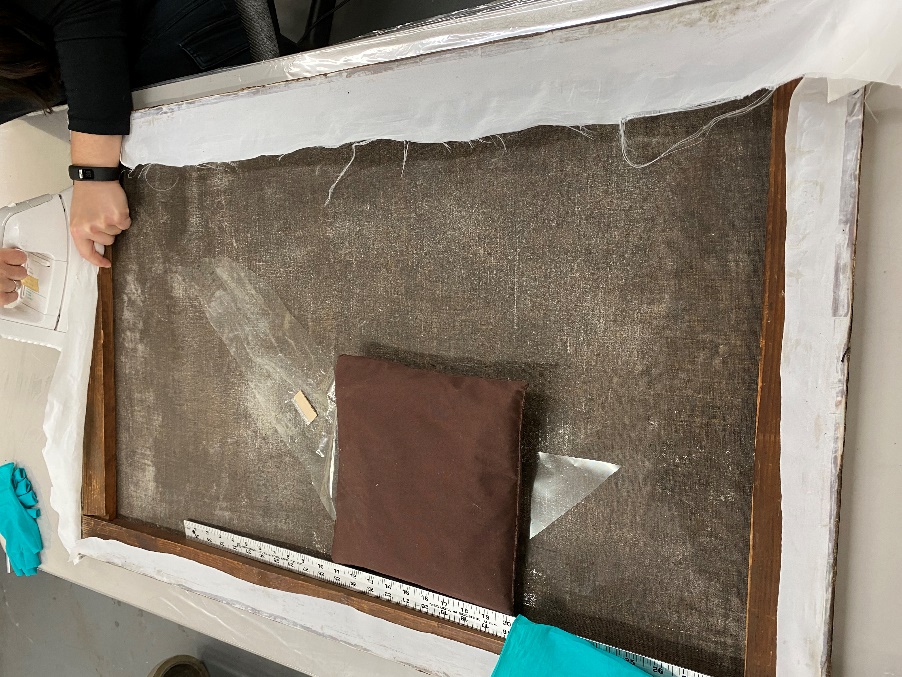 Over time, paint canvas stretches and tightens on its stretcher as humidity levels change. Some paintings can become too loose, and with the weight of an extra piece of fabric and excess wax, this painting was beginning to sag. Re-stretching the canvas helps to evenly disperse the tension of the canvas to the stretcher.

With the canvas re-stretched, it was time to inpaint. This is the process of adding new paint to areas that have previously lost paint. Paint colors are carefully mixed to match the existing paint. 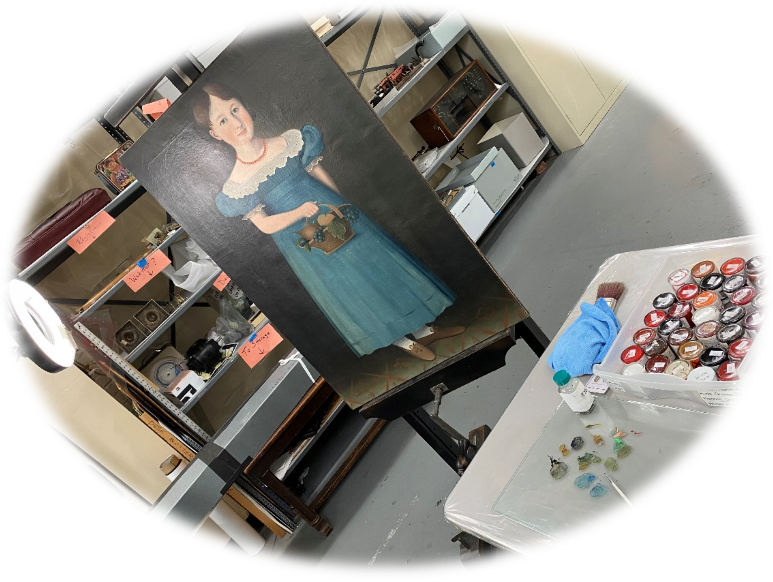 Getting set up to inpaint. 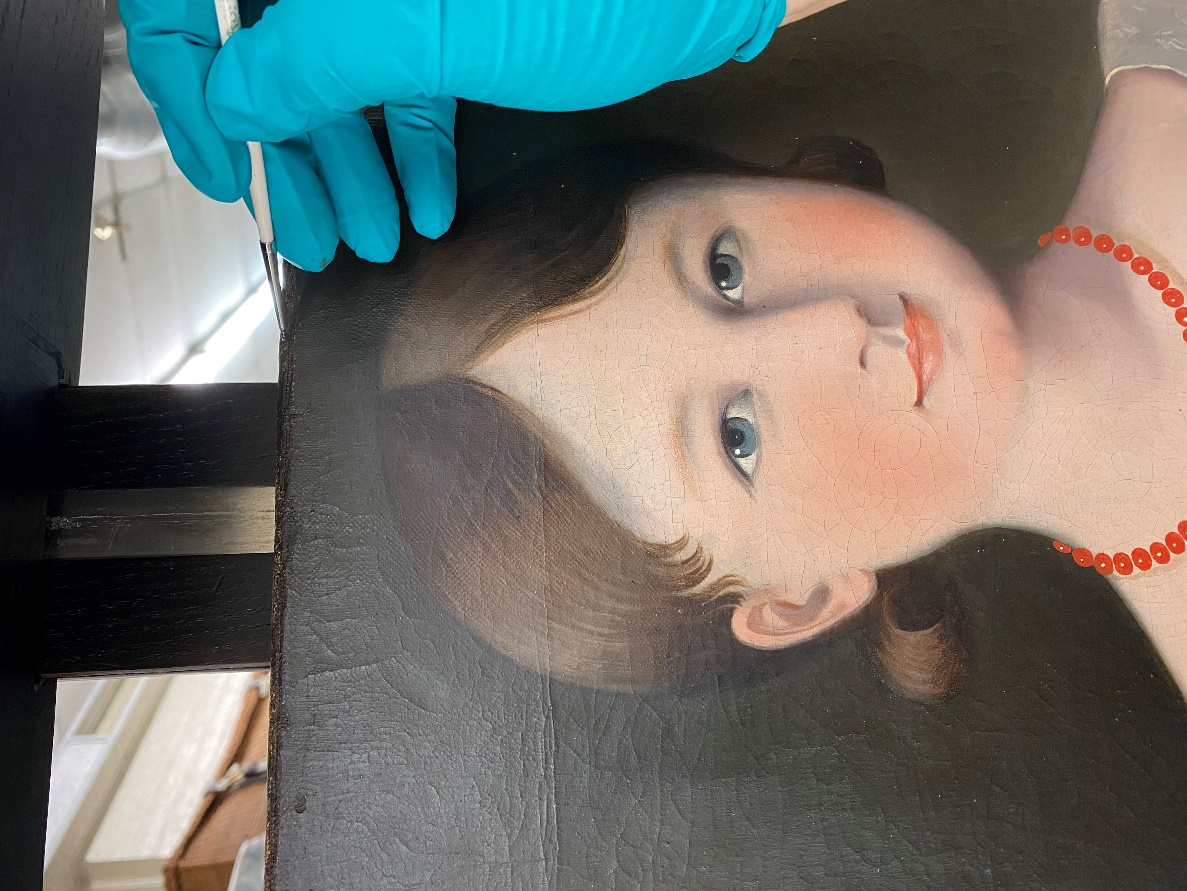 Once the inpainting was dry, a new coat of varnish was brush-applied. New varnishes have been created that will filter out harmful UV rays, create a barrier layer to protect the paint from dust that can scratch the surface over time, and should no longer yellow with age. After letting the varnish cure, the last thing to do was return the painting to its frame, which had also been cleaned and inpainted. 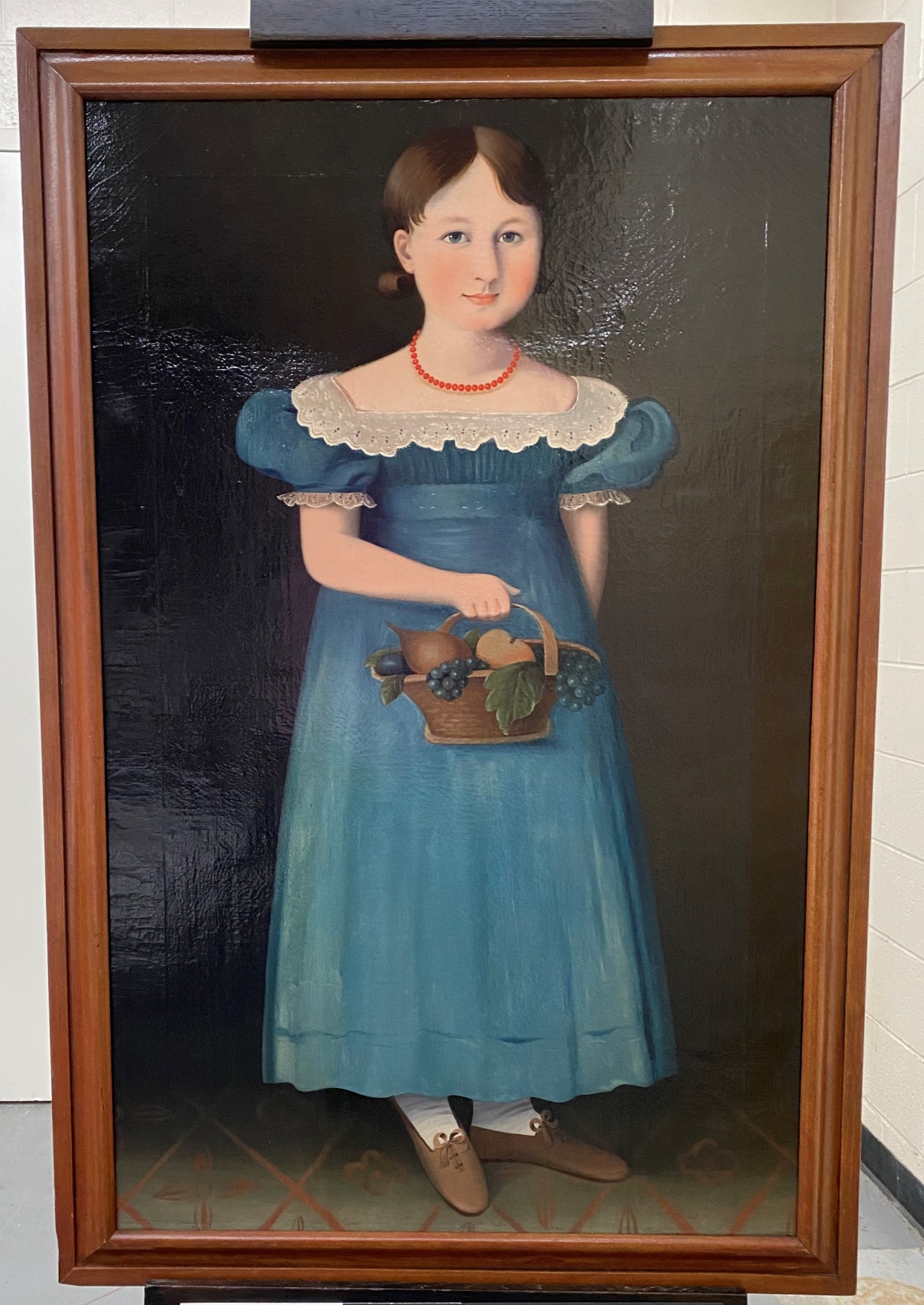 The completed painting after conservation.

What’s next? Because of philanthropic support from Susan and Henry Fradkin and The American Folk Art Society, we can continue conservation work on another painting. Here is a sneak peek at an 1850s oil painting attributed to Fredrick E. Cohen: “King Strang and His Harem on Beaver Island.” If you are visiting the museum this summer, stop by the back of the museum and peek into the conservation lab to see its progress. 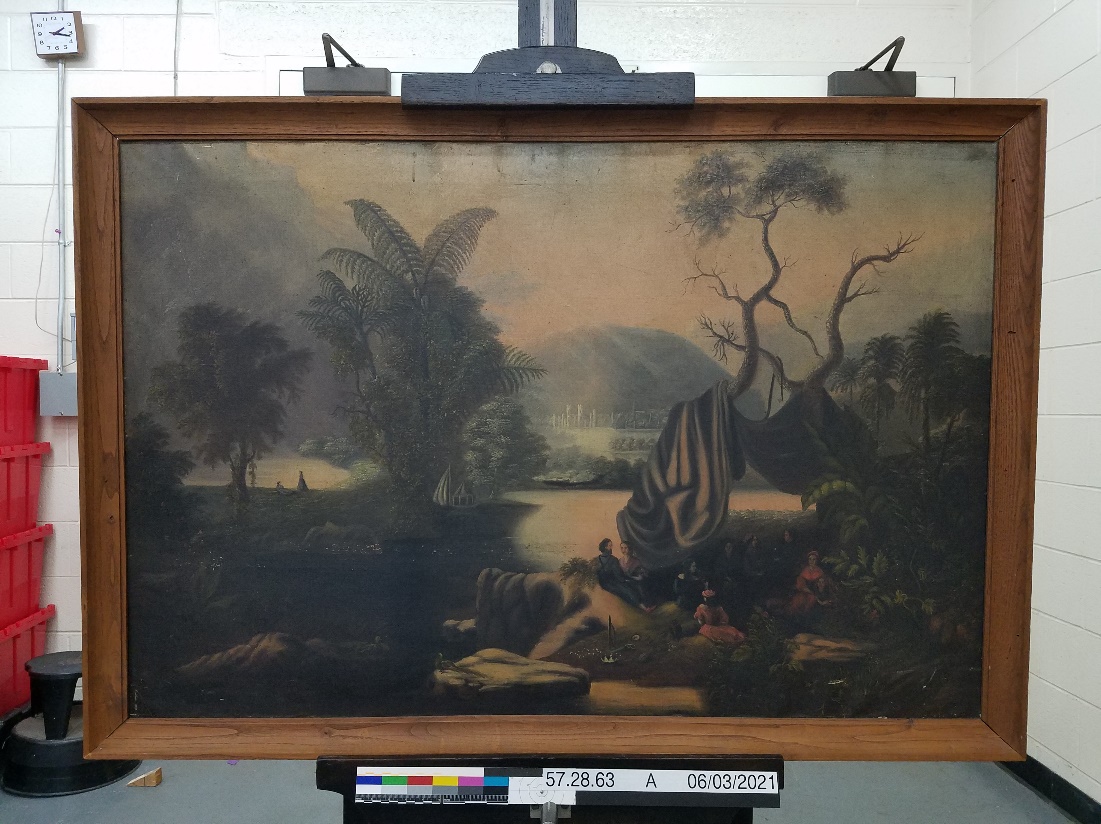 The next painting to be conserved.


Gabbi Saraney is Conservation Specialist at The Henry Ford.