“The Farmer Is the Man That Feeds Us All.” The words of that folk tune became indelibly imprinted on U.S. popular culture when Alan Lomax included it as the 66th out of the 317 songs in Folk Songs of North America (in the English Language) (1960). In fact, linking “the farmer” to “the man” tells only half the story! 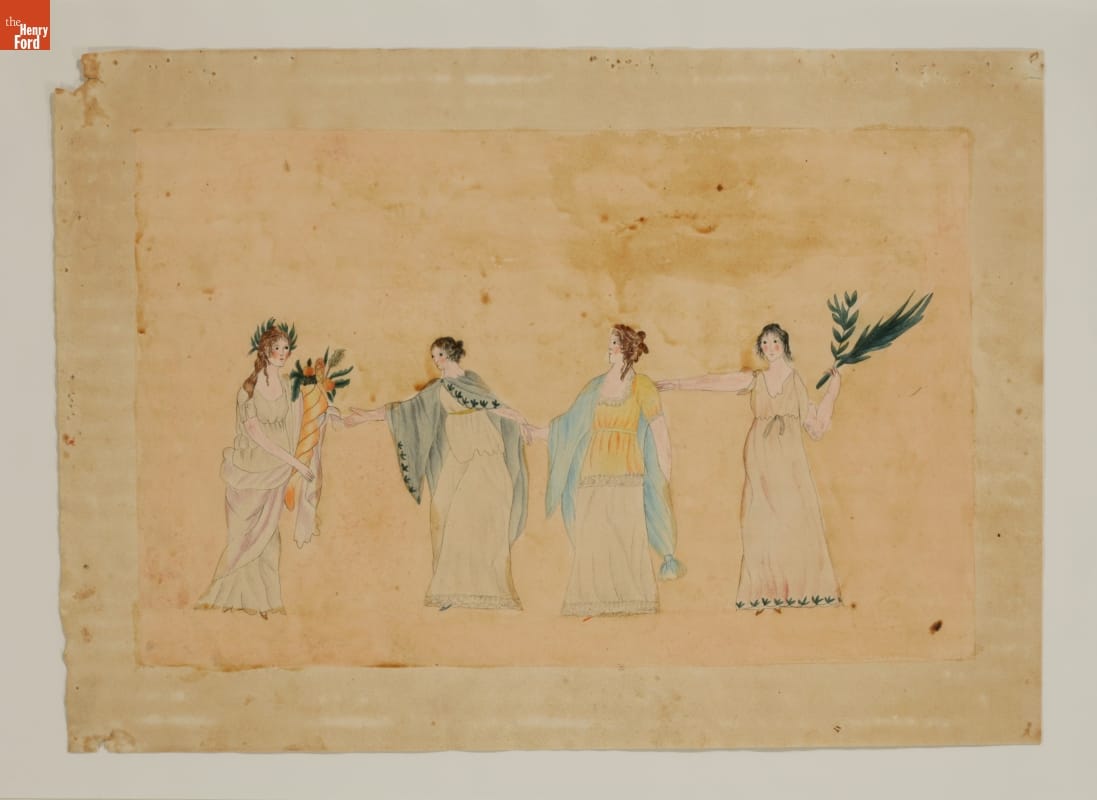 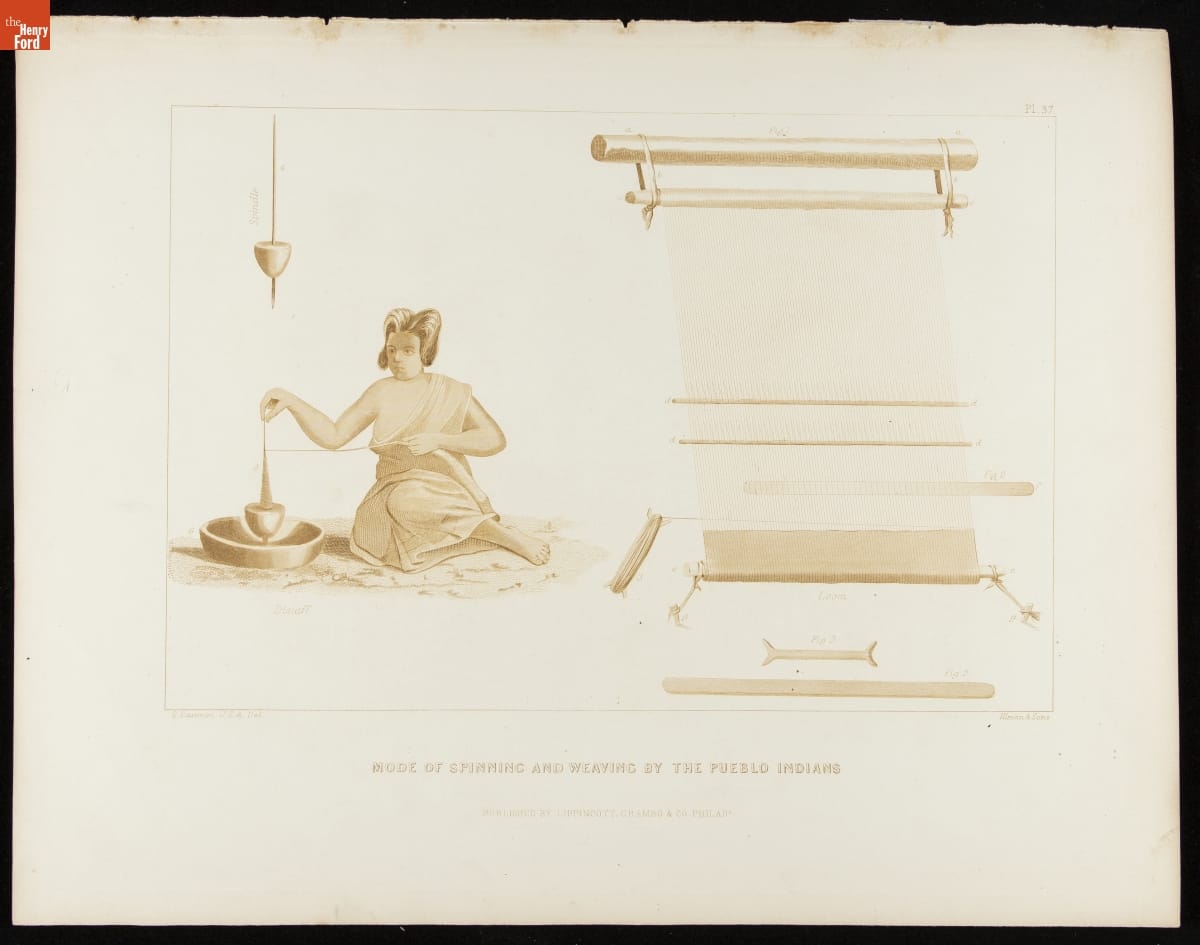 Abundance and peace marked a stable and secure agricultural society. Yet, farms throughout the expanding United States flourished on lands that matrilineal indigenous societies had managed for centuries before colonization. The Henry Ford acknowledges these matrilineal indigenous societies as stewards of the lands that sustained them for centuries. 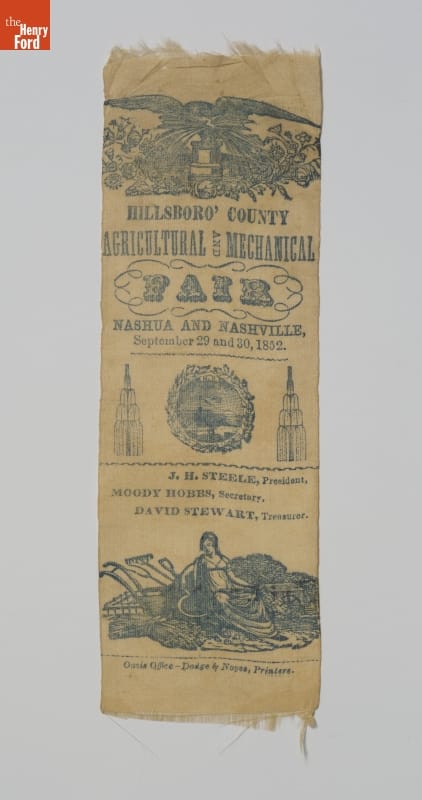 The popular depictions of goddesses of agriculture, grains, harvest, and fertility continued in U.S. popular culture for decades. The agricultural fair badge above depicts either the Greek goddess, Demeter; the Roman goddess, Ceres; or America’s Lady Liberty—all matrons of agriculture.

In contrast, illustrations in The Farmers and Dairymans Almanac, published the same year (1852), featured only men engaged in the practice of growing crops and rearing livestock. The work fit the seasons—flailing grain, building fence, spreading manure, and bringing in the sheaves—but emphasized that men did agricultural work and ran the business of farming as well. 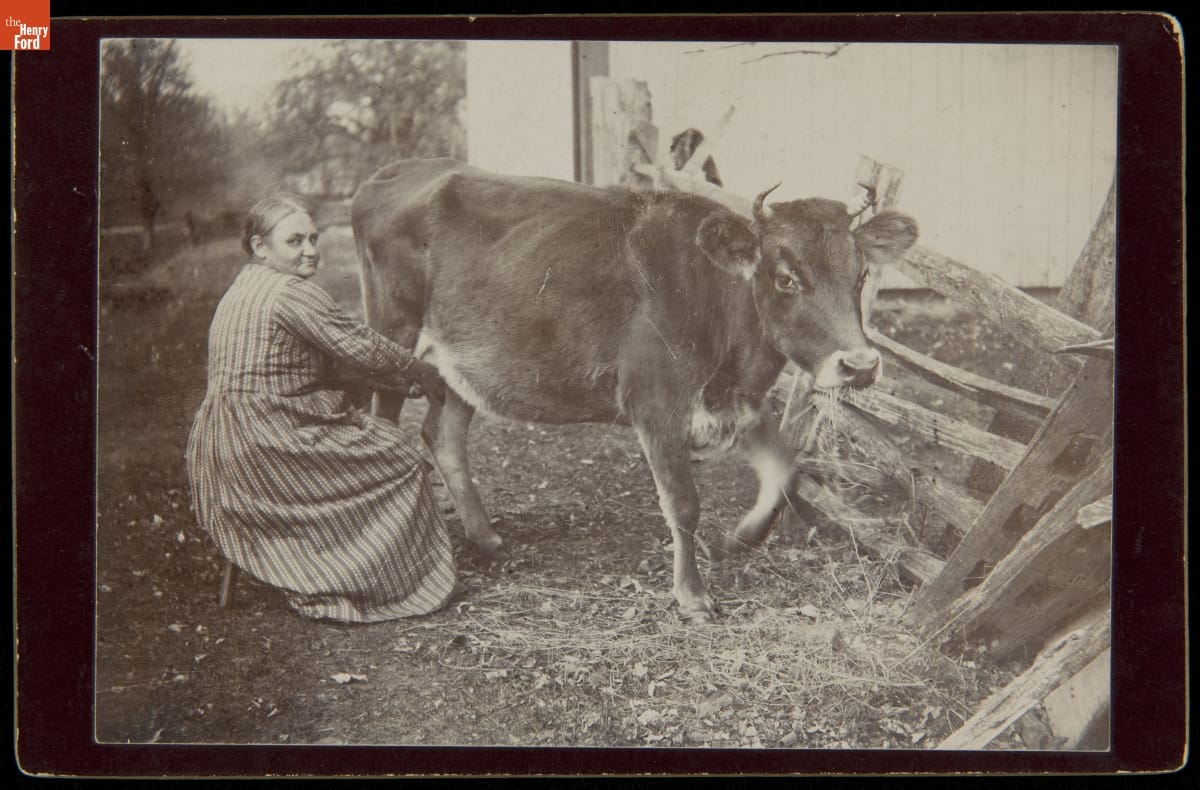 Women acted as farmers, nonetheless. They performed many tasks routinely, including milking cows and tending chickens. 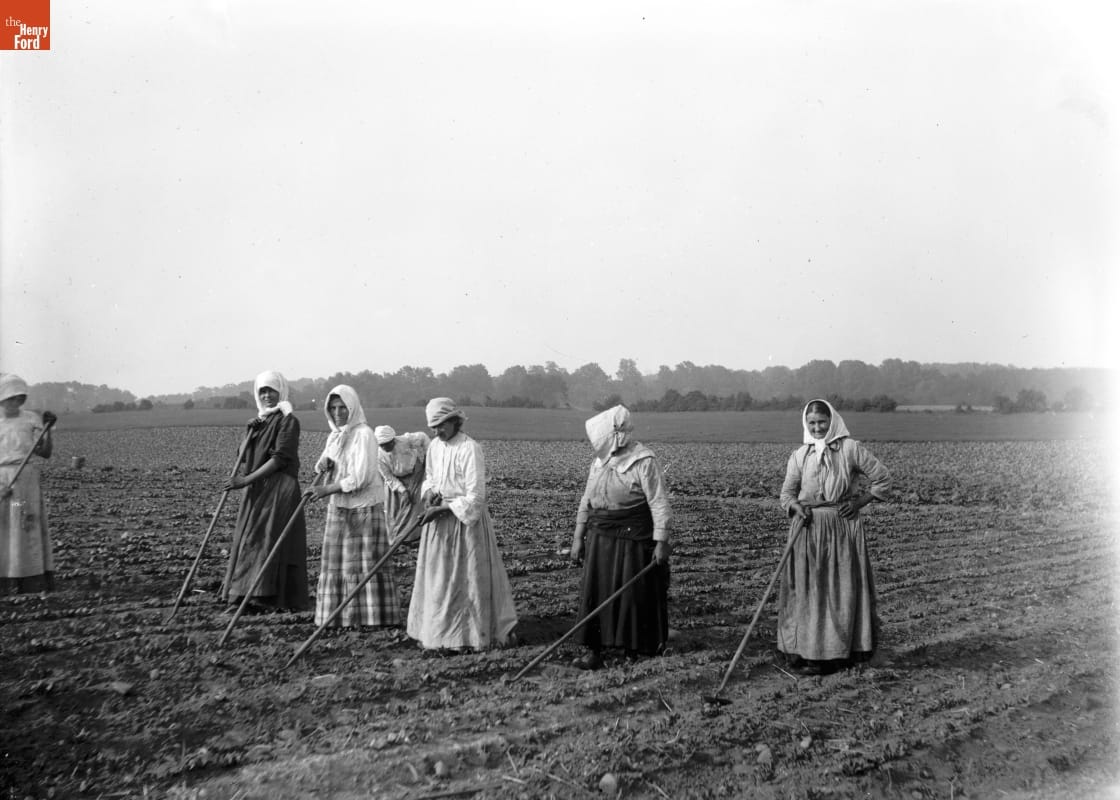 Women worked in the fields, too, especially when crops needed planting, cultivating, or harvesting. Sometimes they did this work as a member of a gang of laborers. The companionship might have eased some of the tedium of hoeing around seedlings to reduce competition from weeds, but it did not ease the physical demands of the labor. The women shown above, described as Norwegian by the photographer, work in farm fields near Brooklyn, New York. 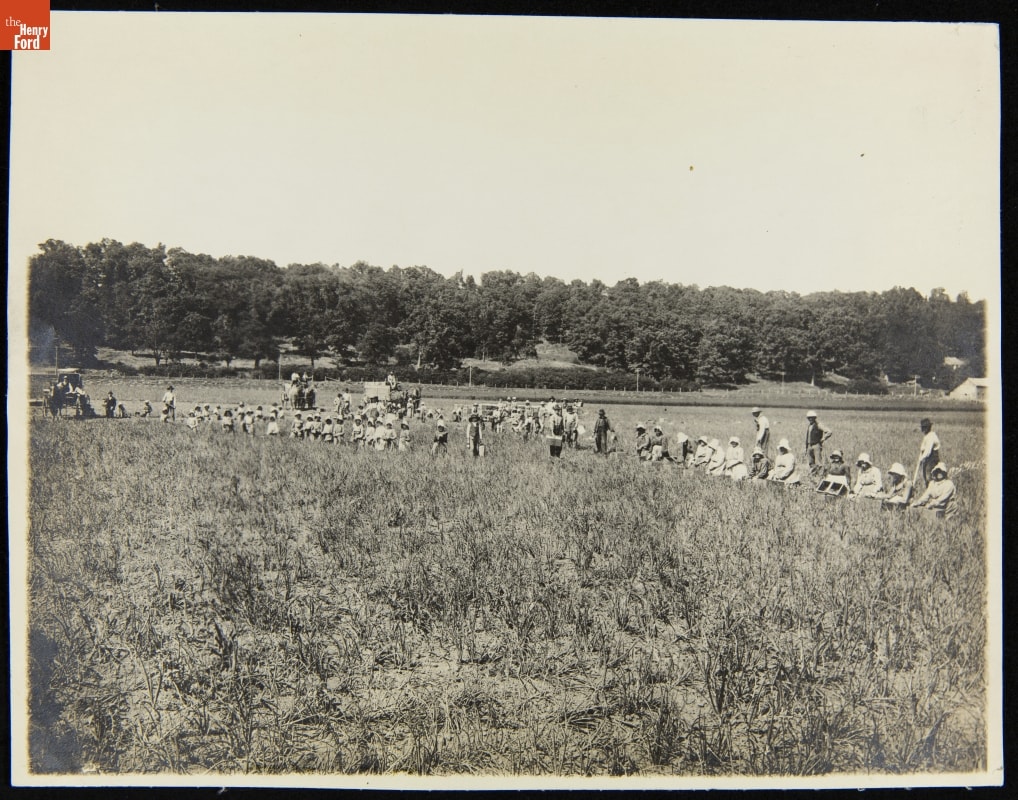 Perishable commodities required everyone to pitch in. The above photograph shows girls and boys, as well as women and men, busy in an onion field under contract to the H. J. Heinz Company.

During harvest seasons, farming needs often took precedence over domestic routines and women worked alongside men to get work done as quickly as possible. This included harvesting turpentine from long-leaf pine forests—yes, forestry work is a branch of agricultural work.

Women operated some machinery, too. Illustrated Industries and Geography of America (1882) features women and children raking hay. One illustration (page 96) shows a woman operating a Wheeler & Melick Co. rake, but this and others like it might have been pure advertising ploys, emphasizing ease of operation and celebrating the notion that “many hands make light work.” The description for the Coates Lock-Lever Hay and Grain Rake in Illustrated Industries and Geography of America (page 231) explains that “twenty acres is a fair day’s work, and as any boy or girl who can guide a horse can work it, it will readily be seen how great a labor-saver it is.” 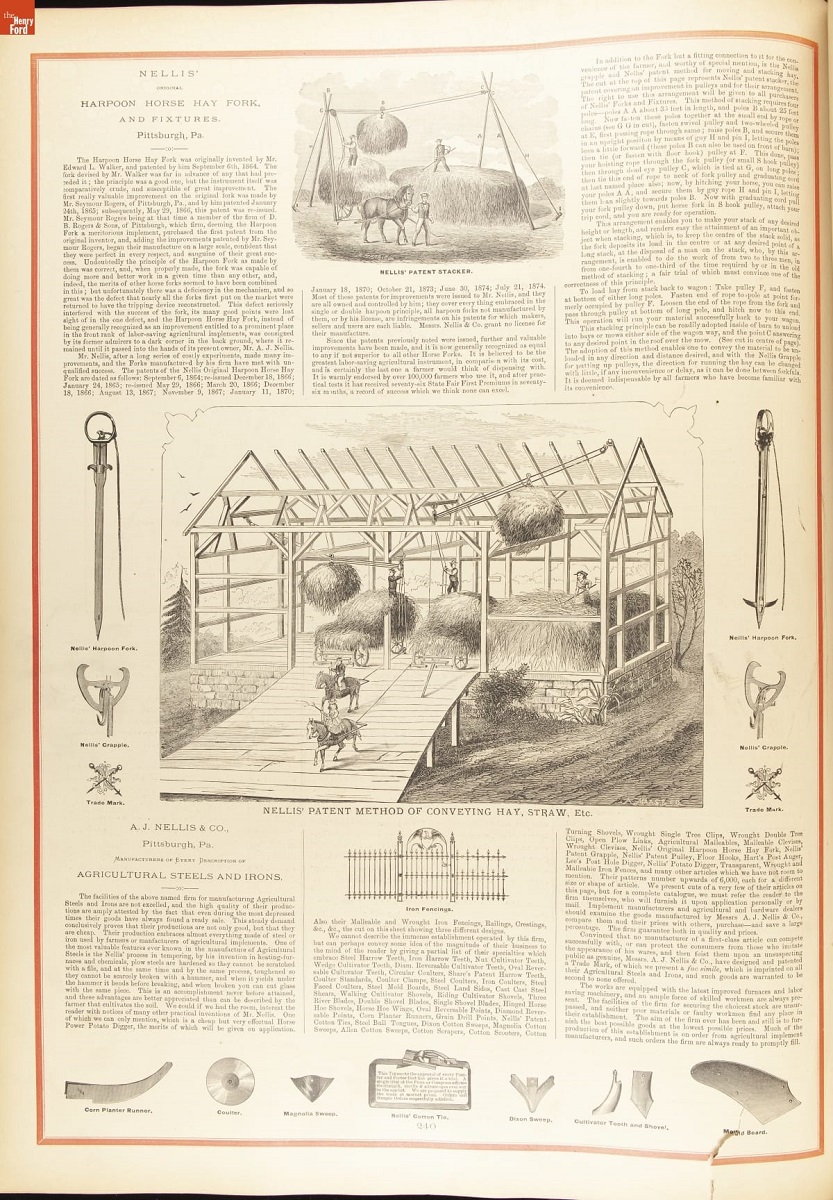 The need to get hay in dry provided opportunities for girls and women to contribute their labor. The 1882 illustration above shows a girl and a boy on horses that generate the power to raise the loaded hay fork and run it along the track to dump hay in the barn. The same illustration shows a woman at work in the dirtiest job, distributing the dumped hay in the mow.

The work completed by women and children often contributed to the economic solvency of the family farm. They “gleaned” by walking through harvested fields and picking up grain and straw missed by the work crews. The photograph above shows laborers after a day at work in rice fields in South Carolina. The raft transported them and their grain and straw back home, where they hulled the grain for family use or to sell and used the straw as forage or bedding for their livestock. 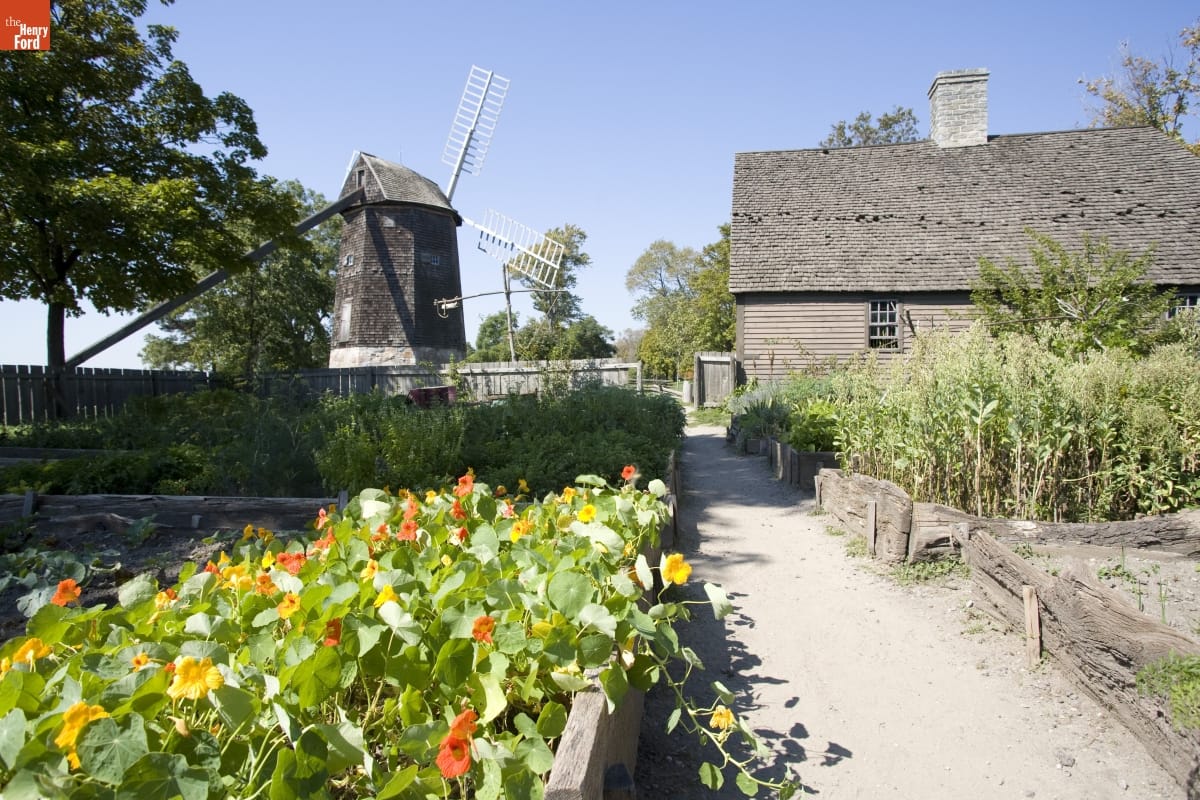 The Daggett family, of Daggett Farmhouse, had a very set routine of farm and household management tasks. Samuel Daggett ran the business side of the farm. He had to ensure harvests of enough hay to keep the cattle herd healthy, and enough small grains to satisfy family consumption needs and market income. Anna Bushnell Daggett, on the other hand, oversaw the kitchen garden, to ensure harvests adequate to feed the family. The Daggett family raised food they needed for the entire year on their farmland. They had to plan the quantity and quality of plants and vegetables they needed to grow and harvest to ensure family survival. They then had to preserve the crops by pickling, storing (in a root cellar), fermenting, or drying them to ensure a supply throughout the winter months and into the next season. 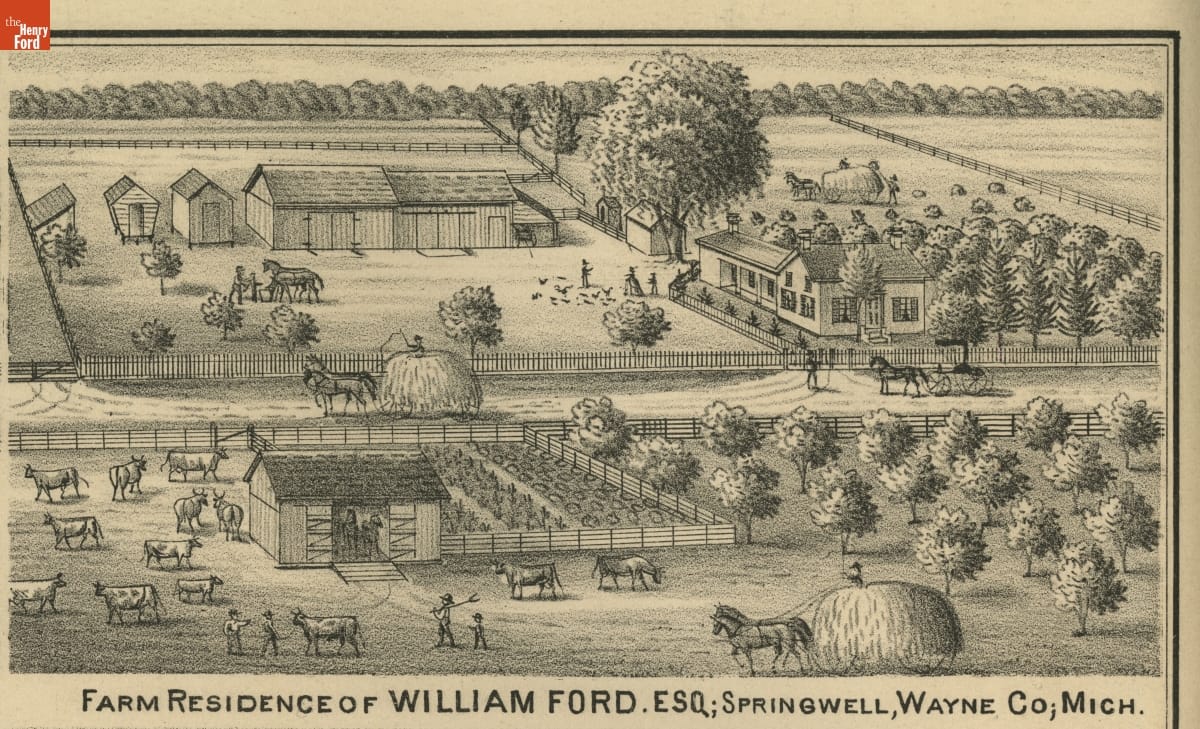 The Ford farmhouse functioned well under the oversight of Henry Ford’s mother, Mary Litogot Ford. She maintained the busy farmstead while ensuring that her young and growing family was well fed and healthy. She, with the help of neighboring farmgirls, milked the cattle and tended chickens. She may also have helped with pressing seasonal farm work like bringing in the hay crop, but her young family probably consumed most of her attention on the farm. Mary unfortunately passed away on March 29, 1876, and it’s hard to imagine the historical farmstead operating without her at the center (distinctive in her dress in the illustration above, published in 1876) standing with children and chickens. 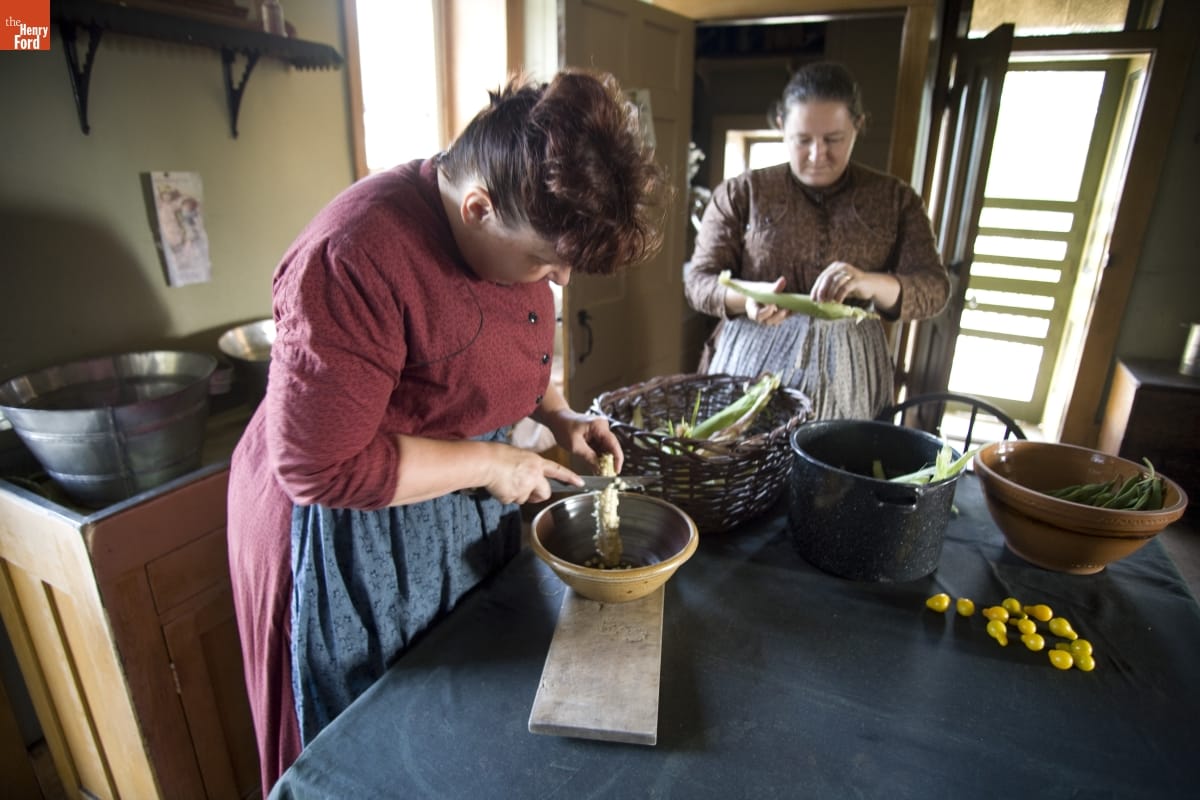 Firestone Farmhouse provides insight into the question, “What does it take to put a meal on the table?” This work drove a farm woman’s working day as she prepared three meals each day, 365 days every year. Morning activities focused on the repetitive and time-consuming tasks of preparing, consuming, and cleaning up after breakfast, while also preparing farm-grown produce, eggs, and meat for the noon meal. Other chores, including work in the kitchen garden, processing of dairy products, and tending to the chicken flock, in addition to household chores and childcare, consumed afternoons and evenings. Evenings involved additional preparation for the same tasks repeated the next day, and so on. Disruptions to these routines included celebrations like weddings, somber events such as funerals, and the haste of harvest which increased the farm workload for all. 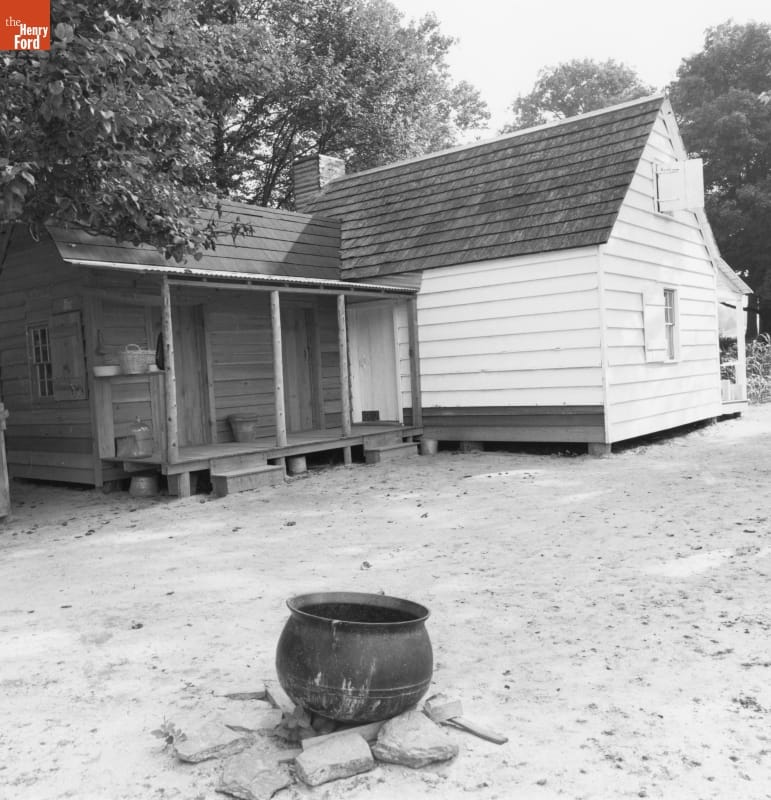 The center of many farm women’s lives revolved around the backyards of farm homes. Grace Mattox, her ancestors and her children, spent countless hours over decades keeping the backyard of the Mattox Family Home swept. This area, with its nearby brush arbor, provided additional space to get work done, and to visit with relatives and neighbors while they did it. The Mattox children remembered their hardscrabble existence, consisting of constant work to keep the garden cultivated, ripe vegetables processed, and food on the table.

The Henry Ford’s collections and these historic farmsteads in Greenfield Village provide a glimpse into the routines of farm women’s work. Their labor, from sun-up to sun-down, was essential to ensure the health and wellbeing of their families, as well as the smooth operation of their farms. These routines changed by the mid-twentieth century, as processed foods reduced the work required to maintain the family food supply and new farm implements replaced laborers. Often, women pursued off-farm work, but they remained essential to farm operations as their earnings helped family farms make ends meet.


Debra A. Reid is Curator of Agriculture and the Environment at The Henry Ford and Kathleen Johnson is a student at Henry Ford Academy.