The History of Historic Base Ball in Greenfield Village

In 1993, inspired by a handful of century-old newspaper references, nine employees volunteered to form The Henry Ford’s first historic base ball club. What started small has become a grand and beloved Greenfield Village tradition, guided—as it was from the beginning—by a passion for authenticity. 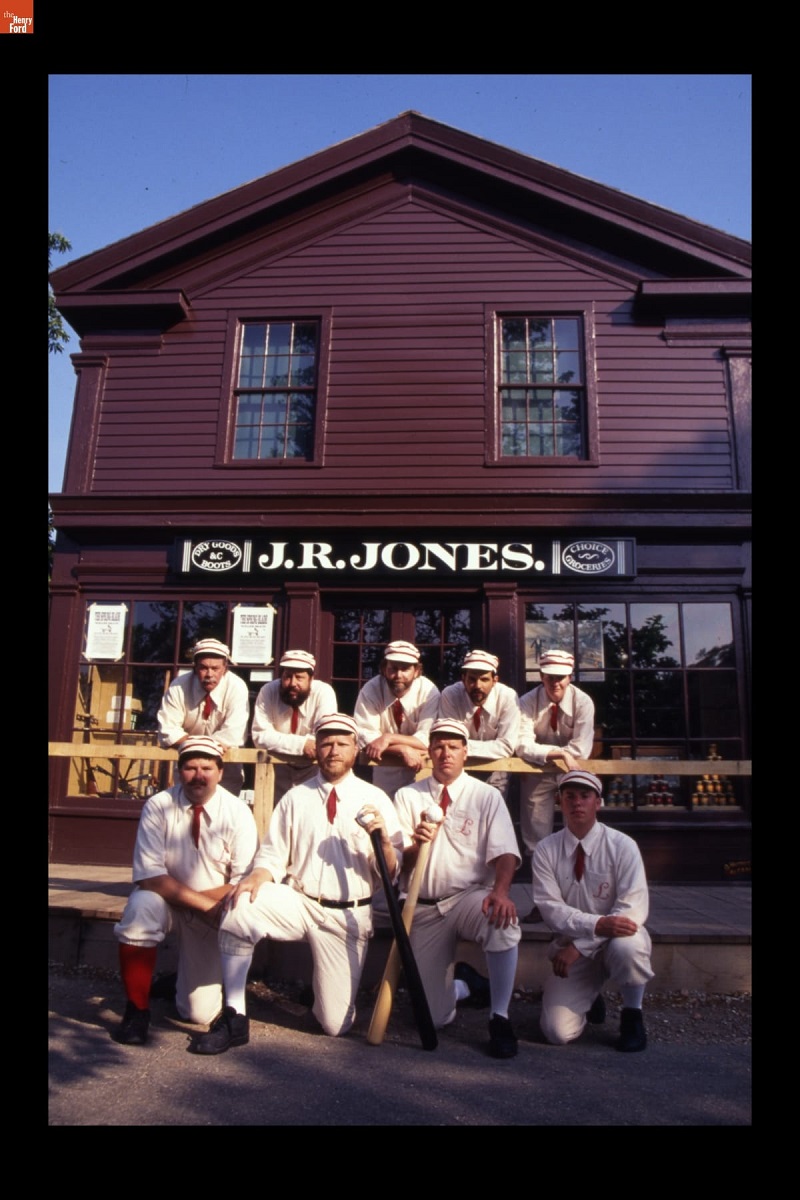 The Greenfield Village Lah-De-Dahs and the general store that spurred the club’s formation, 1994. / THF136301

It all began with Greenfield Village’s general store. New research in the 1990s initiated a more accurate historical interpretation of the J.R. Jones General Store as it existed in Waterford, Michigan, during the 1880s. It also turned up references to a local amateur base ball club—the Lah-De-Dahs—in period newspapers. Employees eagerly set about reviving the Lah-De-Dahs as a historic base ball club. A clue about the original uniform came from a colorful report on the Lah-De-Dahs’ poor showing in a summer 1887 game:

As the contest went on, slowly but surely dawned upon the minds of all the truth that a fine uniform does not constitute a fine pitcher, nor La-de-dahs in their mammas’ red stockings make swift, unerring fielders.  —Pontiac Bill Poster, September 14, 1887

The revived Lah-De-Dahs of Greenfield Village wore white base ball shirts with a red script “L” and, at first, nondescript white painter’s pants. (The Henry Ford’s period clothing studio soon produced matching, knickers-style bottoms.) That first season, the Lah-De-Dahs played a handful of matches with rules pieced together from various historical interpretations. At Firestone Farm, the club challenged farmhands in the harvested wheat field before whatever crowd gathered along the lane. The Lah-De-Dahs also hosted a few outside historic base ball clubs at their future home field, Walnut Grove.

Historic base ball in Greenfield Village quickly assumed a more structured form that incorporated thoughtful details rooted in history—beginning with the name of the sport itself. Virtually all of the earliest references to this style of bat-and-ball game in England and the United States used the hyphenated name, “base-ball.” By the late 1830s and into the 1840s, likely due to simple changes in typesetting practices, the two-word spelling, "base ball," had begun to replace "base-ball." Conventions continued to shift, with the hyphenated version reemerging in the mid-late 19th century and receiving formal backing from the U.S. Government Printing Office in 1896. But years earlier, in 1884, the New York Times had explicitly changed its style guide away from "base-ball" to "baseball"—an early move toward the one-word convention that would stick. To highlight overlapping customs in the sport’s formative decades, The Henry Ford emphasizes the two-word spelling in its historic base ball program. 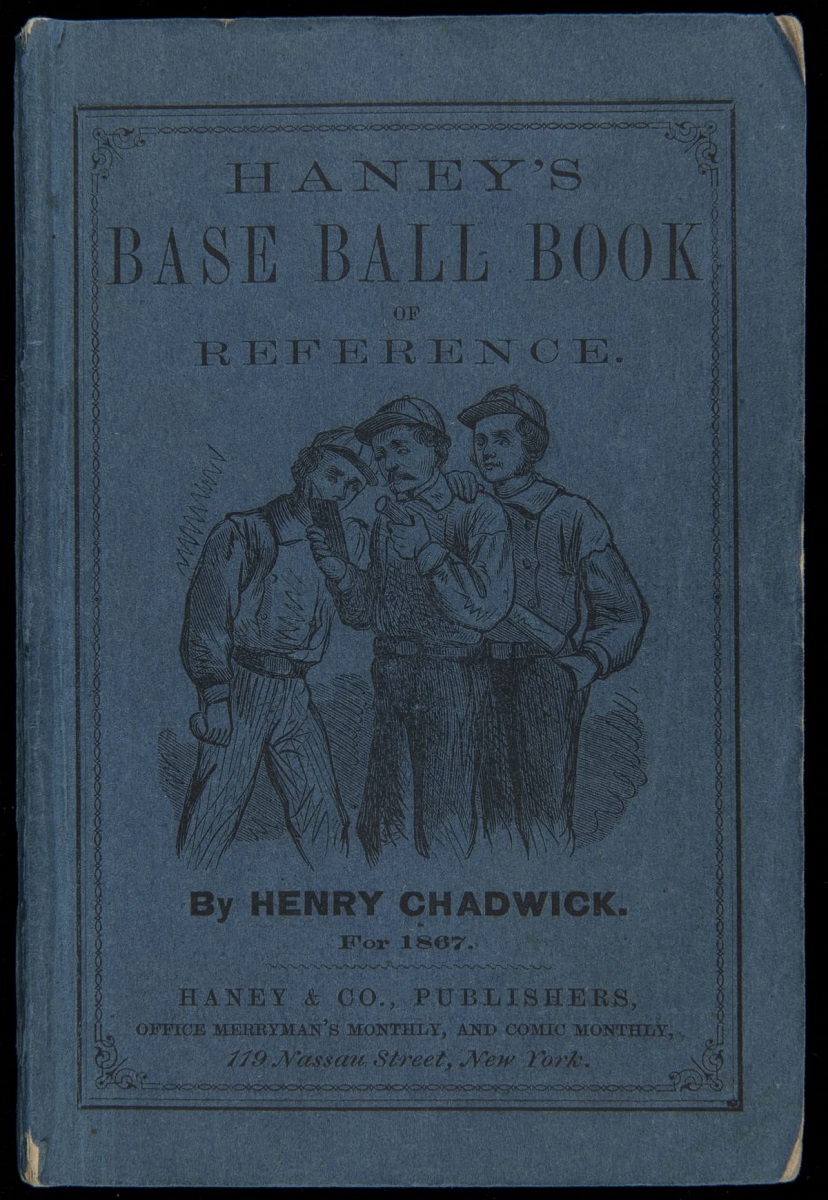 Henry Chadwick’s 1867 Base Ball Player's Book of Reference, the first reference book designed to teach the game of base ball, from which the current rules of play in Greenfield Village were drawn. / THF214794

For demonstration in Greenfield Village outside of Lah-De-Dahs matches, a set of rules, known as “Town Ball” or “Massachusetts Rules,” was selected from the 1860 Beadle’s Dime Base Ball Player. Written by Henry Chadwick, a sports journalist and leading promoter of base ball, this book included early rules of the game we know today, as well as the alternative “Massachusetts Rules” version of the game. This early version of baseball requires minimal equipment, calls for a soft ball, and features chaotic rules, making it a perfect choice for guests of Greenfield Village to try.

Elements added for the comfort and enjoyment of spectators on Walnut Grove appropriately reflect the 1860s setting. On select dates, the Dodworth Saxhorn Band provides musical accompaniment representing that of a period brass band. (Much of the music commonly associated with the professional game of baseball in America—including its unofficial anthem, “Take Me Out to the Ball Game”—was published two generations later.) Refreshments are served from contextual, temporary structures fitting the rural environments where 1860s base ball was played. And a uniquely designed sound system—disguised by several strategically placed waste receptacles—allows the umpire and scorekeeper to present a real-time account of the game via concealed cordless microphones. The live music and play-by-play, combined with the unpredictability of the game, make for an entertaining afternoon. 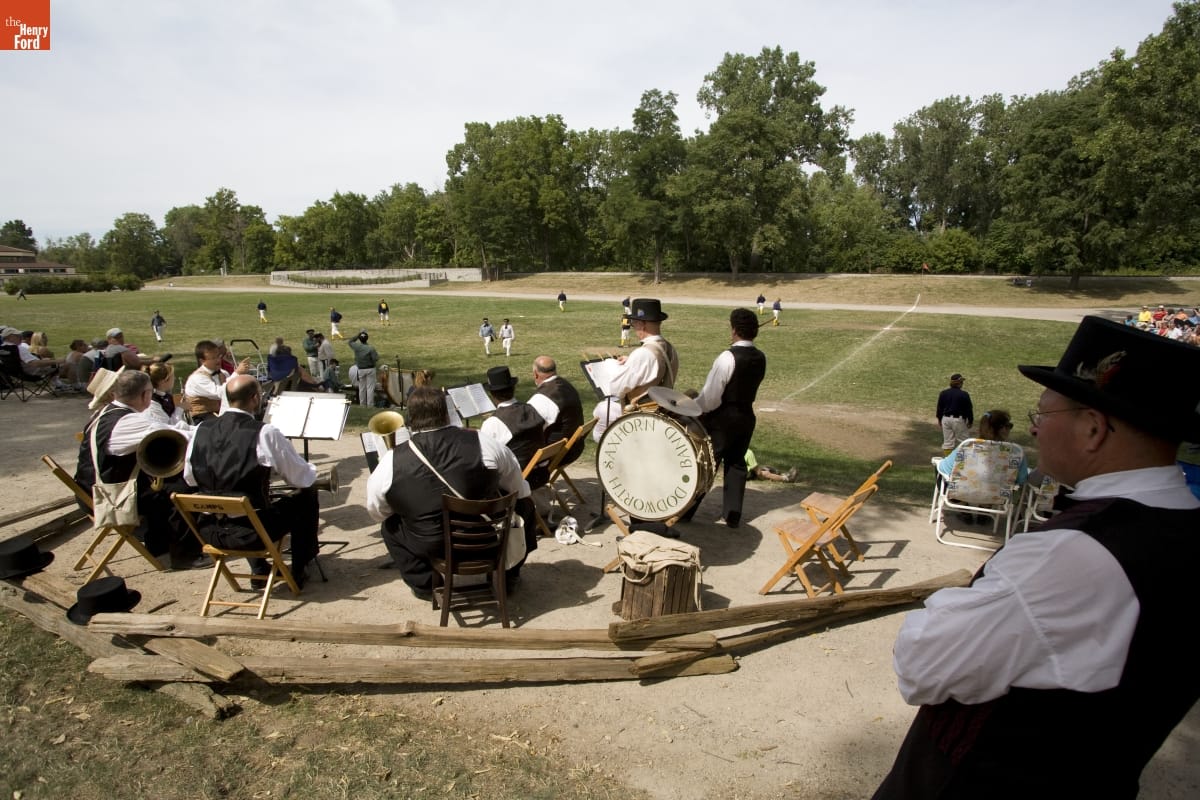 The Dodworth Saxhorn Band during the World Tournament of Historic Base Ball, 2007, photographed by Michelle Andonian. / THF52297

The Lah-De-Dahs’ roster grew to 25 players over the club’s second and third seasons. They wore handmade uniforms for matches, which were held whenever visiting clubs could make the trip to Greenfield Village. By 2002, the season consisted of a dozen games played on select Saturdays throughout the summer. After nearly a decade of play, the Lah-De-Dahs had attracted a dedicated fan base, and spectators increasingly requested a regular schedule with more games.

The reopening of Greenfield Village in 2003 after a massive restoration project heightened expectations for the historic base ball program. With financial support from Edsel and Cynthia Ford, The Henry Ford delivered an entire summer of base ball with expanded offerings: daily period base ball demonstrations, formal games on Saturdays and Sundays—now played by the “New York rules” specified in Henry Chadwick’s 1867 Base Ball Player's Book of Reference (which were more familiar to spectators than the Massachusetts Rules game)—and the development of the World Tournament of Historic Base Ball.

The Henry Ford’s World Tournament of Historic Base Ball pays homage to the original “World's Tournament of Base Ball” hosted in August 1867 by the Detroit Base Ball Club. Though organizers ultimately failed to attract the world-famous clubs of the day, they managed to stage a remarkable, one-of-a-kind event. The trophy bat awarded to the Unknown Base Ball Club of Jackson, Michigan—winners of the first-class division of the 1867 tournament—is now in The Henry Ford’s collections. It is displayed each year in Greenfield Village during the World Tournament of Historic Base Ball. 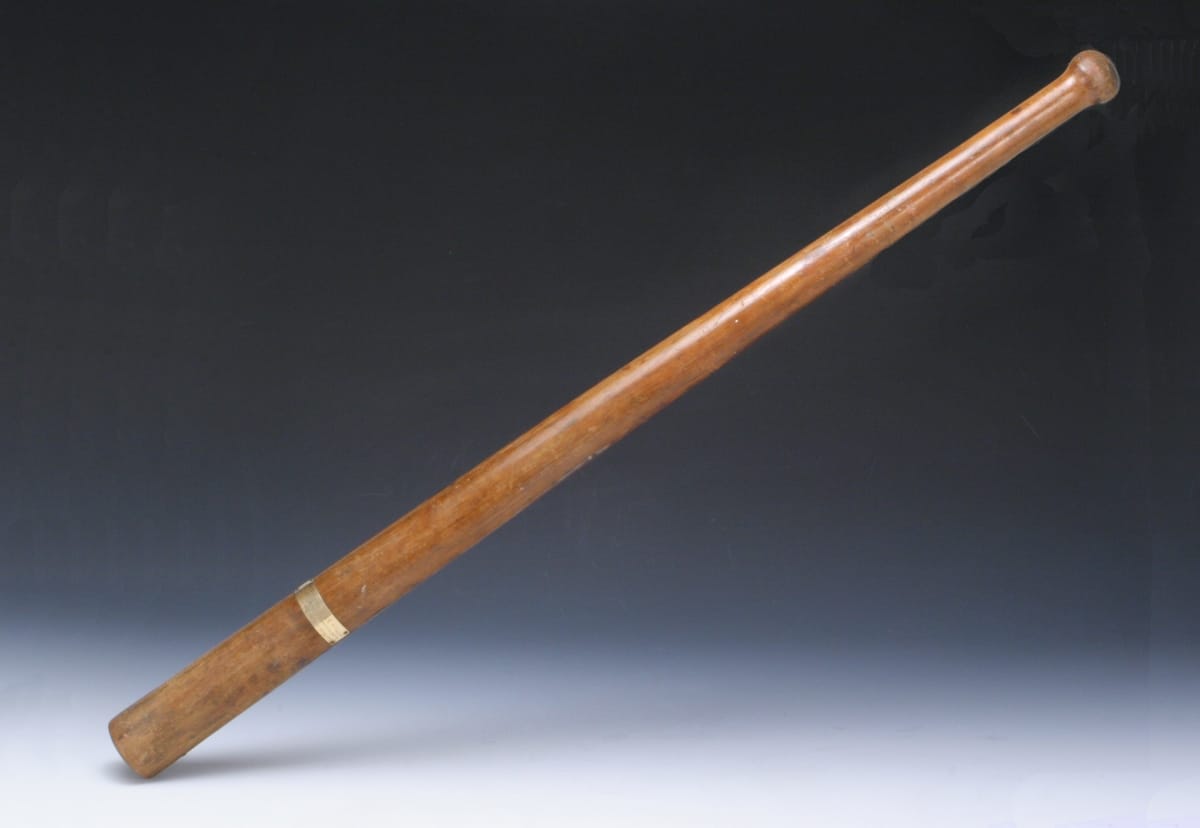 For 2004, the Lah-De-Dahs’ season expanded from 12 to 30 games, and its roster swelled to 42 players. To make sure they always had an opponent, The Henry Ford created a second club. The National Base Ball Club takes its name from a competitor in the 1867 World's Tournament of Base Ball. New uniforms purchased for both clubs added to the already vibrant atmosphere during matches, with the Lah-De-Dahs in their now-familiar red and white and the Nationals in striking dark blue and gold. At first, many considered the Lah-De-Dahs to be Greenfield Village’s “home” club, but displays of sportsmanship and close games going to either side have endeared fans to both. 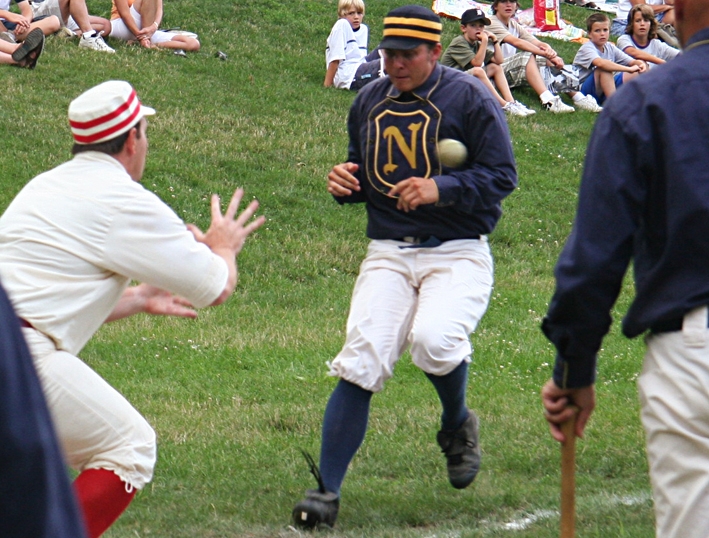 One of the close plays that have helped endear fans to both Greenfield Village clubs.

Over time, baseball became “America’s pastime,” an enduring cultural touchstone—and a multibillion-dollar business. Historic Base Ball in Greenfield Village (and also played in many other venues around the country) showcases an early form of the sport, from a time when amateurs played for recreation and innocent amusement—for the love of the game!


Brian James Egen is Executive Producer and Head of Studio Productions at The Henry Ford and Marcus W. Dickson is Professor of Industrial/Organizational Psychology at Wayne State University. This post was prepared for the blog by Saige Jedele, Associate Curator, Digital Content, at The Henry Ford.

When Base Ball Became Baseball

When we asked Wayne State University Professor of Industrial/Organizational  Psychology Dr. Marcus Dickson to shed some light on the when the sport once known as base ball became known as baseball, here's what we learned:

There were, of course, many bat and ball games prior to our modern version, and they went by many names in both England and the U.S. (and elsewhere). Virtually all references to a game with "base" and "ball" in England, and almost all known 18th and early 19th century references in the U.S., refer to the game as "base-ball". For example, the famous 1791 ban on game playing that threatened the windows of the Meeting House in Pittsfield, Mass., says "no person or inhabitant of said Town, shall be permitted to play at any game called Wicket, Cricket, Base-Ball, Bat-Ball, Football, Cat, Fives, or any other games played with Ball, within the Distance of eighty yards from said Meeting House."

By the late 1830s and into the 1840s, "base ball" had begun to replace "base-ball."  Interestingly enough, the Knickerbocker rules of 1845 and the amendments from 1854 do not include either version of the word -- they simply refer to "the playing rules for 1854", etc. But the rules amended for 1857 do explicitly refer to "base ball."  Nothing other than simple changes in type-setting convention seems to have driven the change, as far as I can tell (as an analog, we no longer use "&c", but instead use "etc.", for no particular reason), and in many cases the decision on what form of the word to use seems not to have been made by the authors, but by the typesetters and their chosen convention.

Just for fun, the convention changed again (after "base-ball" had become "base ball"), and by the mid-late 19th century (late 1870s, early 1880s), the word in the U.S. had again become "base-ball", and according to Dickson's (no relation) Baseball Dictionary (a major source for much of this essay), in 1896 the U.S. Government Printing Office specified that the word should be spelled with a hyphen. Again, no reason for the change is given or evident.

However, by the time the U.S. Government took action (no surprise here), the field was shifting again, and The New York Times had explicitly changed its style guide away from "base-ball" to "baseball" in 1884. As always, no reason other than common usage is given.

Of course, these practices overlapped in time, and you can find the word "baseball" (combined, no hyphen) in print as early as 1858 (though not at all common, and actually as early as the 1830s - though that is believed to be a misprint). You can find "base ball" in some circles into the 1900s (again, not at all common). So there are periods of overlap, and some periods of pretty common usage, and 1867 is square in the middle of a period in which "base ball" was the common spelling. However, I don't think that they ever got as worked up about it as we do today, in our efforts to be accurate. Yes, it was clearly "base ball" in 1867, but any person reading "base-ball" or "baseball" at that time would have known what was intended. In our efforts to highlight the game's history, we emphasize the two-word spelling.