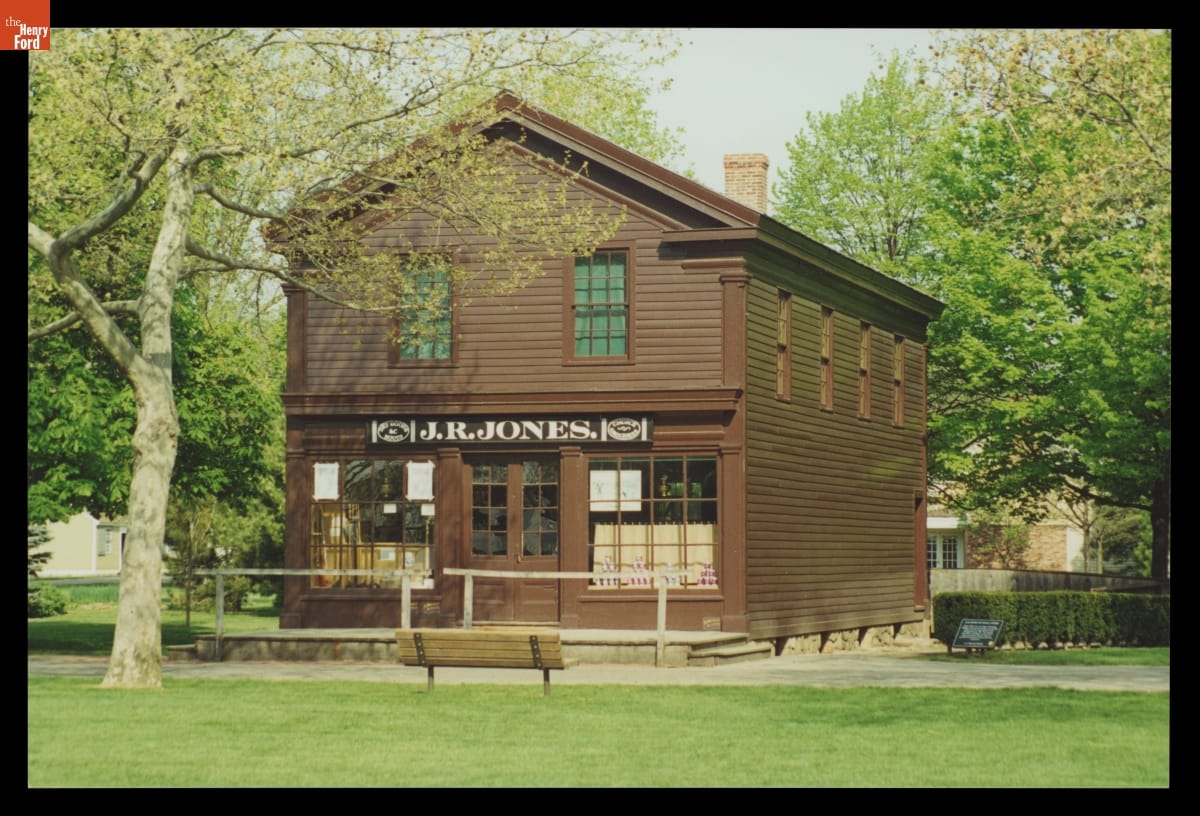 The Waterford Country Store—as it was initially called in Greenfield Village—was the first building to arrive in the Village. Re-erected on the Village Green in 1927-28, it was soon joined by other buildings—a schoolhouse, courthouse, tavern, town hall, and chapel—that to Henry Ford all symbolized America’s spirit of community. New research in the 1990s revealed that, between the time the store was built in 1856-57 and the time Henry Ford brought it to Greenfield Village in the 1920s, nine different storekeepers had operated a general store out of this building. A reinstallation of the building in the 1990s refocused the store’s furnishings and interpretation on the era of 1882 to 1888—when J.R. Jones ran the store in Waterford, Michigan. 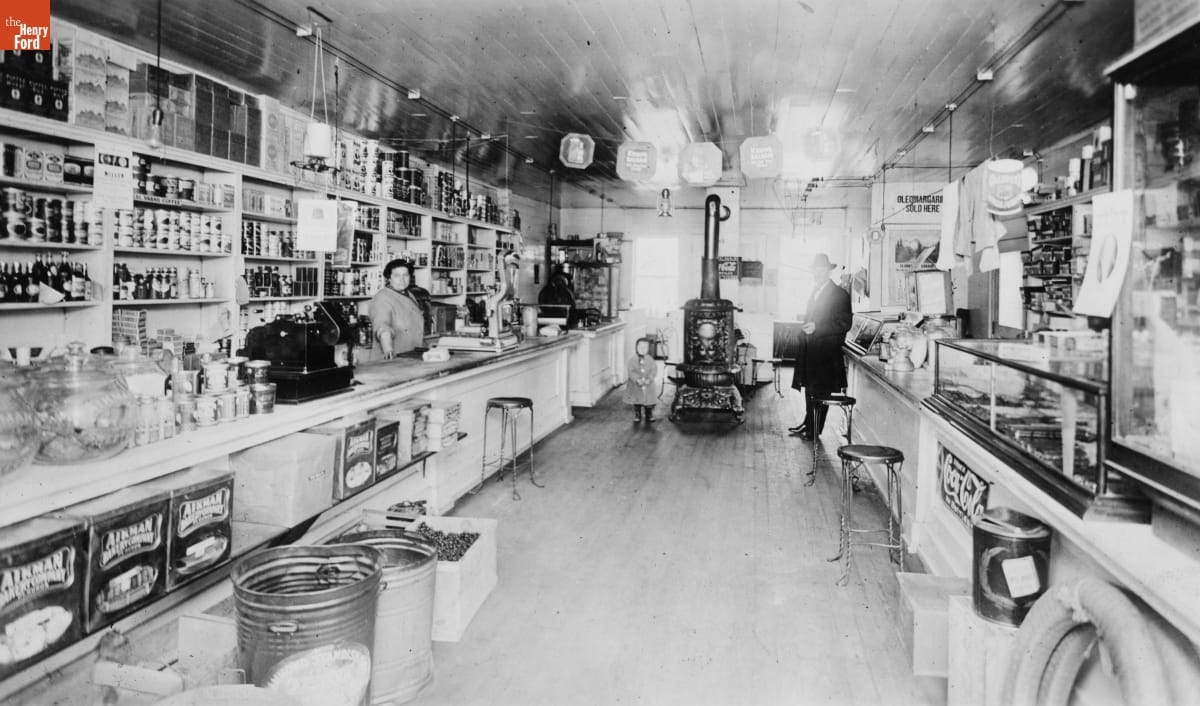 This is an interior view of the stocked, fully functional store in 1925, when the August Jacober family operated it in Waterford, Michigan. The Jacobers were the last family of proprietors to run this store before it was brought to Greenfield Village. 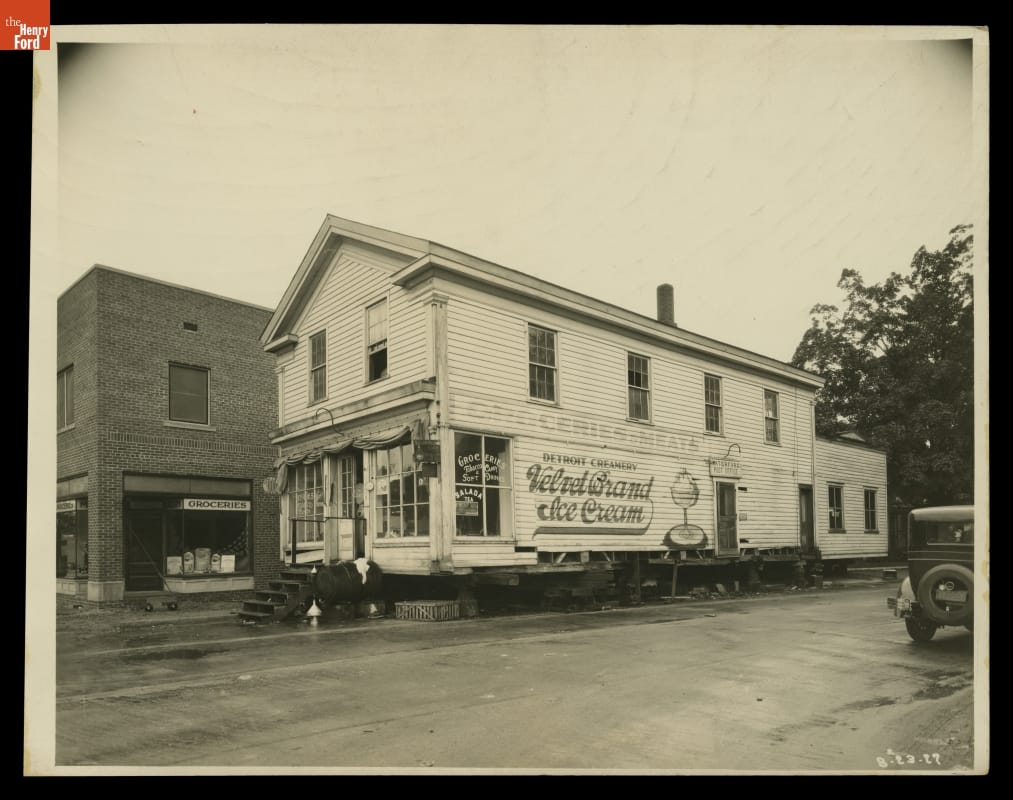 This photograph depicts the general store in Waterford, Michigan, just before it was removed to Greenfield Village in 1926.  According to Jacober family descendants, this store was raised on skids in the street because the family was building a new brick store on its original site. Ford likely saw the old store, had his agents arrange to purchase it around August 1927, and then had it moved to Greenfield Village. 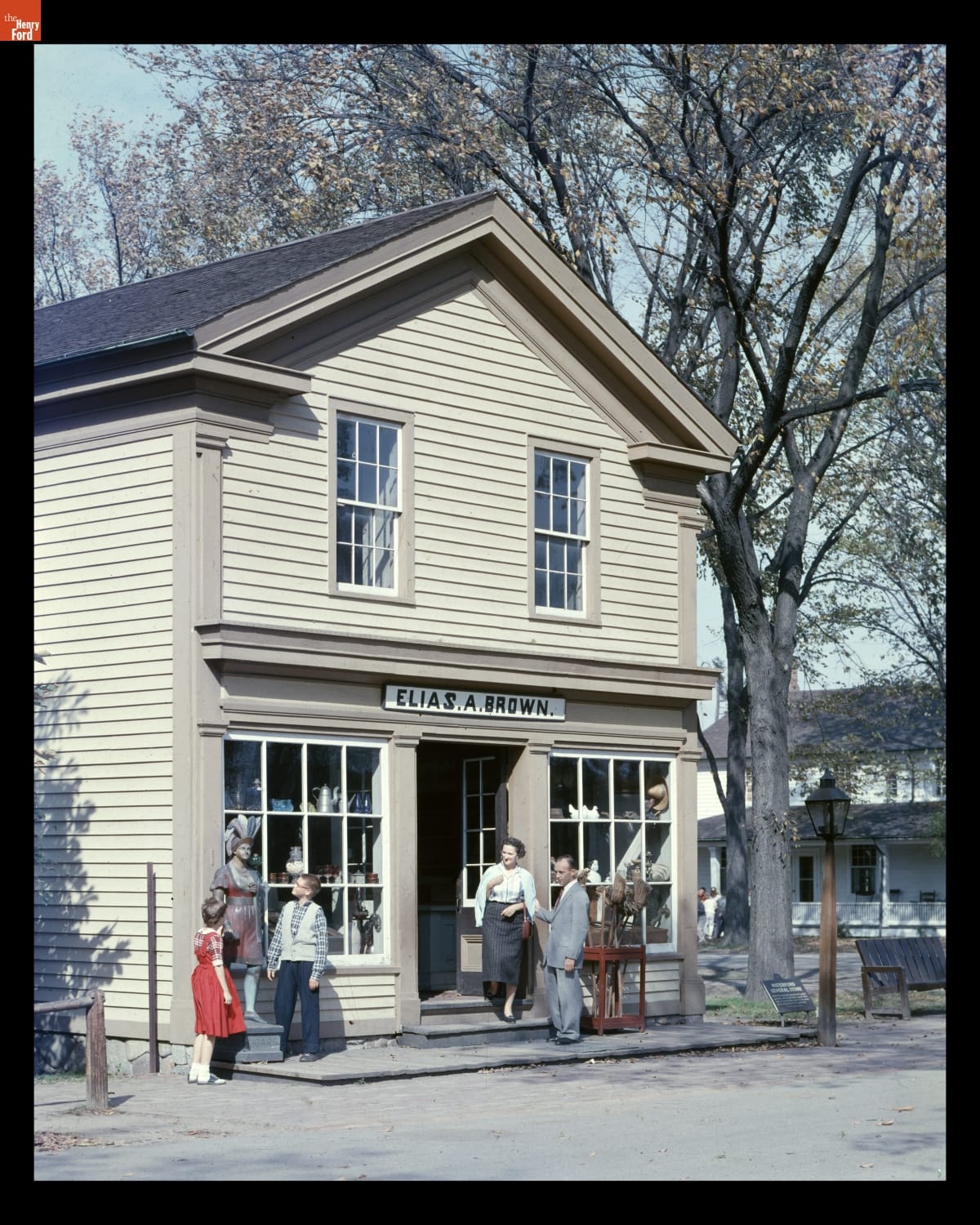 When Henry Ford first envisioned a Village Green as the centerpiece of his recreated village in Dearborn, the general store was situated and reconstructed on what would become its permanent location. The Elias Brown sign that hangs out front in this 1958 image came from upstate New York. During this time, the store was known as the Elias Brown General Store. 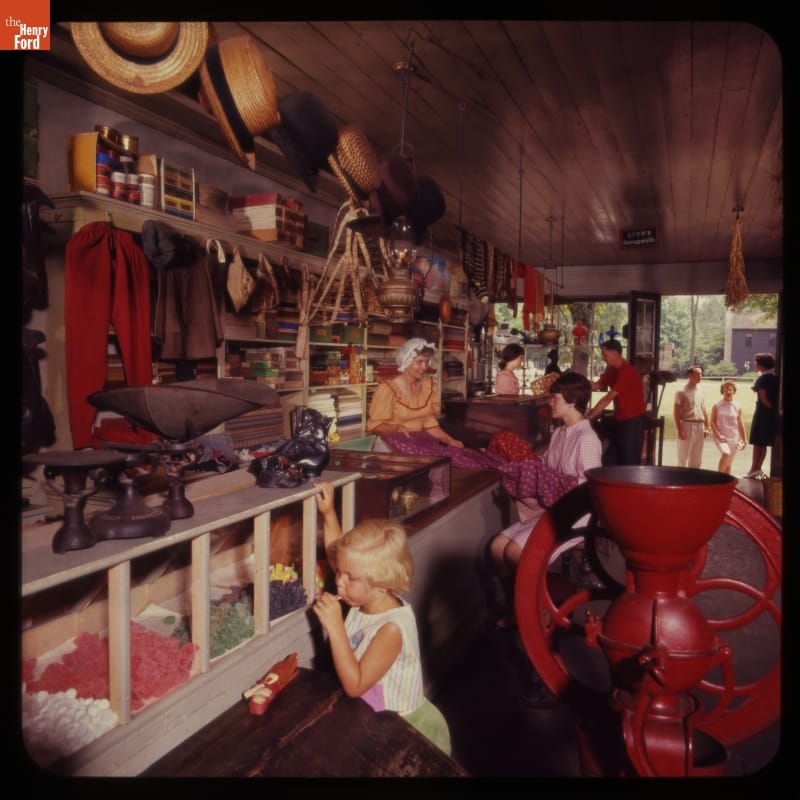 To furnish the building with authentic general store artifacts from the past, Ford sent agents in search of unsold stock that might still remain in old general stores. Their finds primarily came from stores in upstate New York and New Hampshire. By the 1960s, as seen in this image, the interior was furnished not only with old store stock but also with penny candy that visitors could purchase. 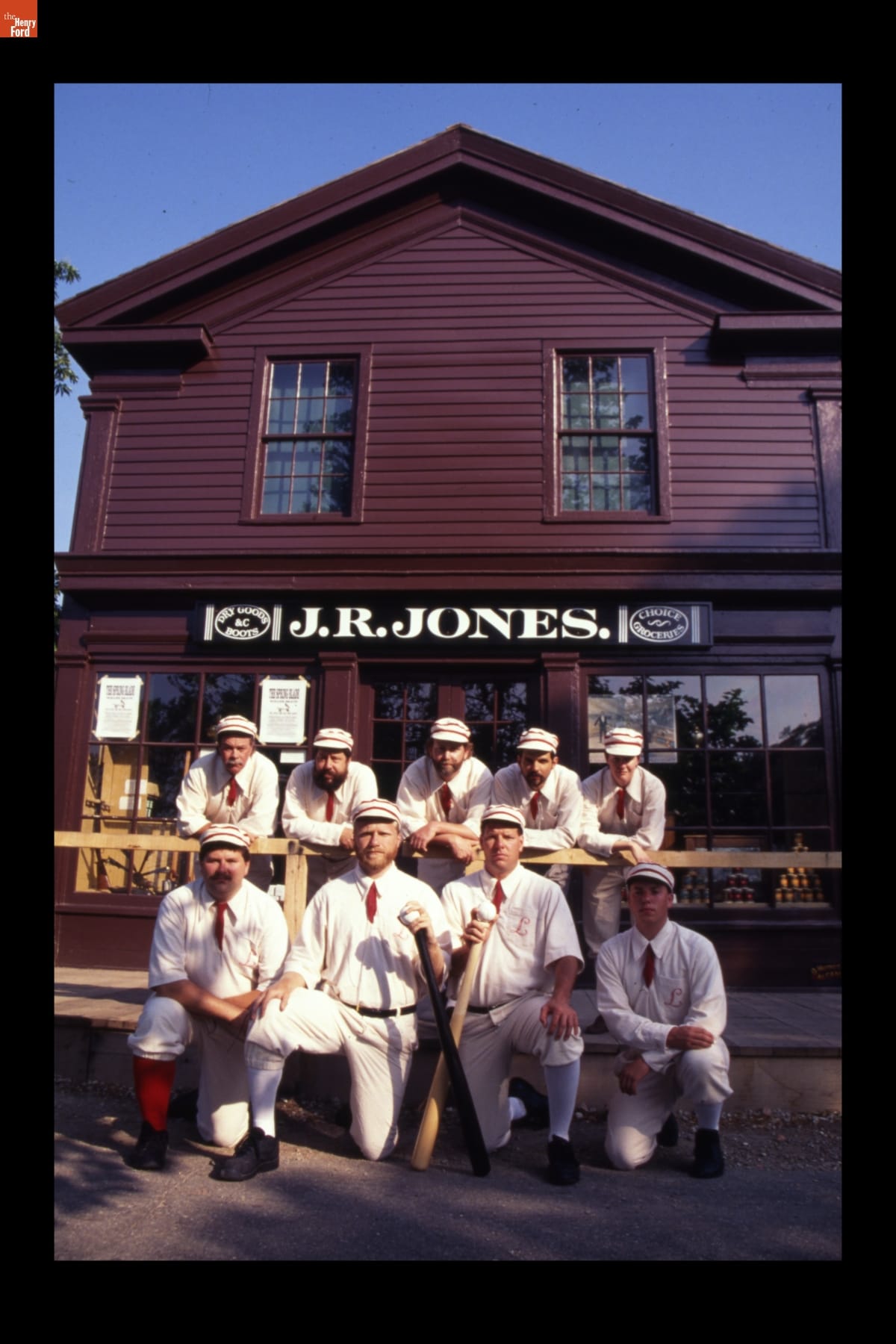 Research in the 1990s led to a new, more accurate historical interpretation of this store as it existed in Waterford, Michigan, during the 1880s. This era was chosen to represent a transition in stores—from old-fashioned displays of pickle barrels and flour bins to shelves stocked with more modern products like canned goods and brand-name items.  A new sign with the name of the proprietor of this store in Waterford during the 1880s—J.R. Jones—replaced the old Elias Brown sign over the front entrance. 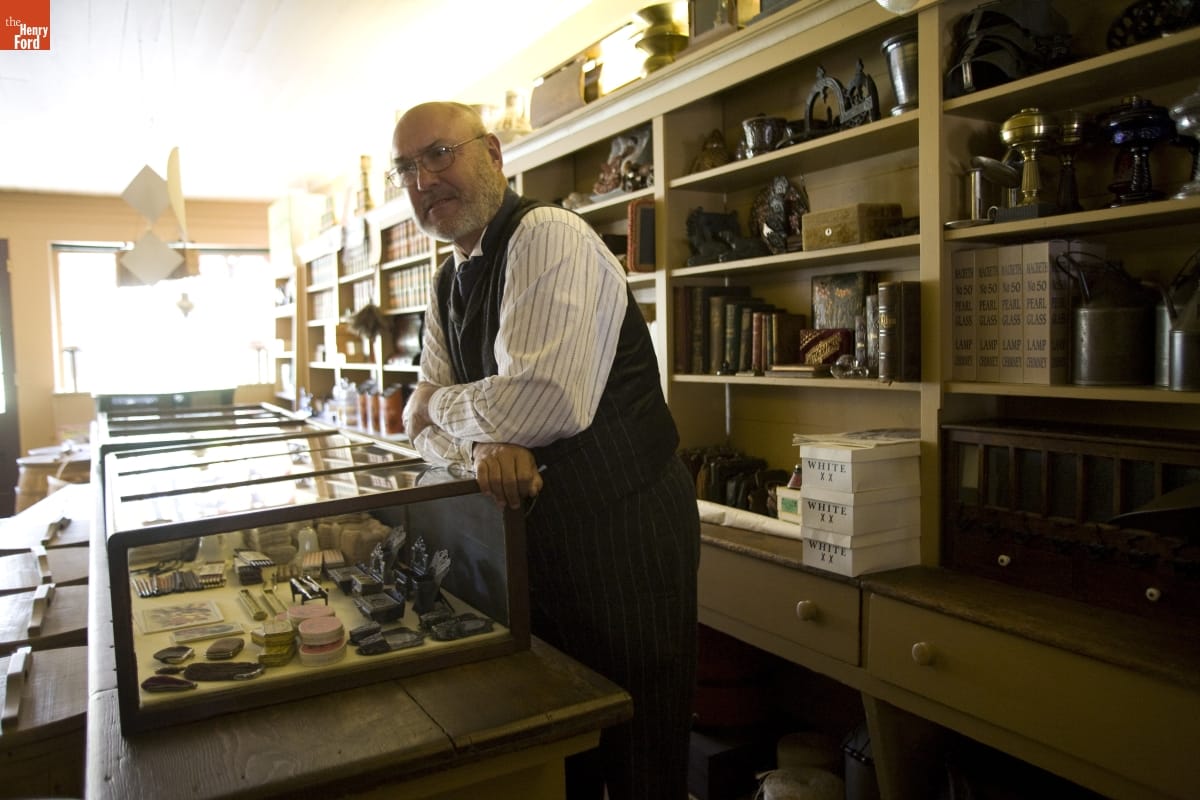 Use of period photographs, account books, and inventories led to the choices of stock for the store.  Presenters in this building—dressed in accurately-researched historic clothing—tell the stories of J.R. Jones, the customers who shopped here in the 1880s, and the products they might have purchased.