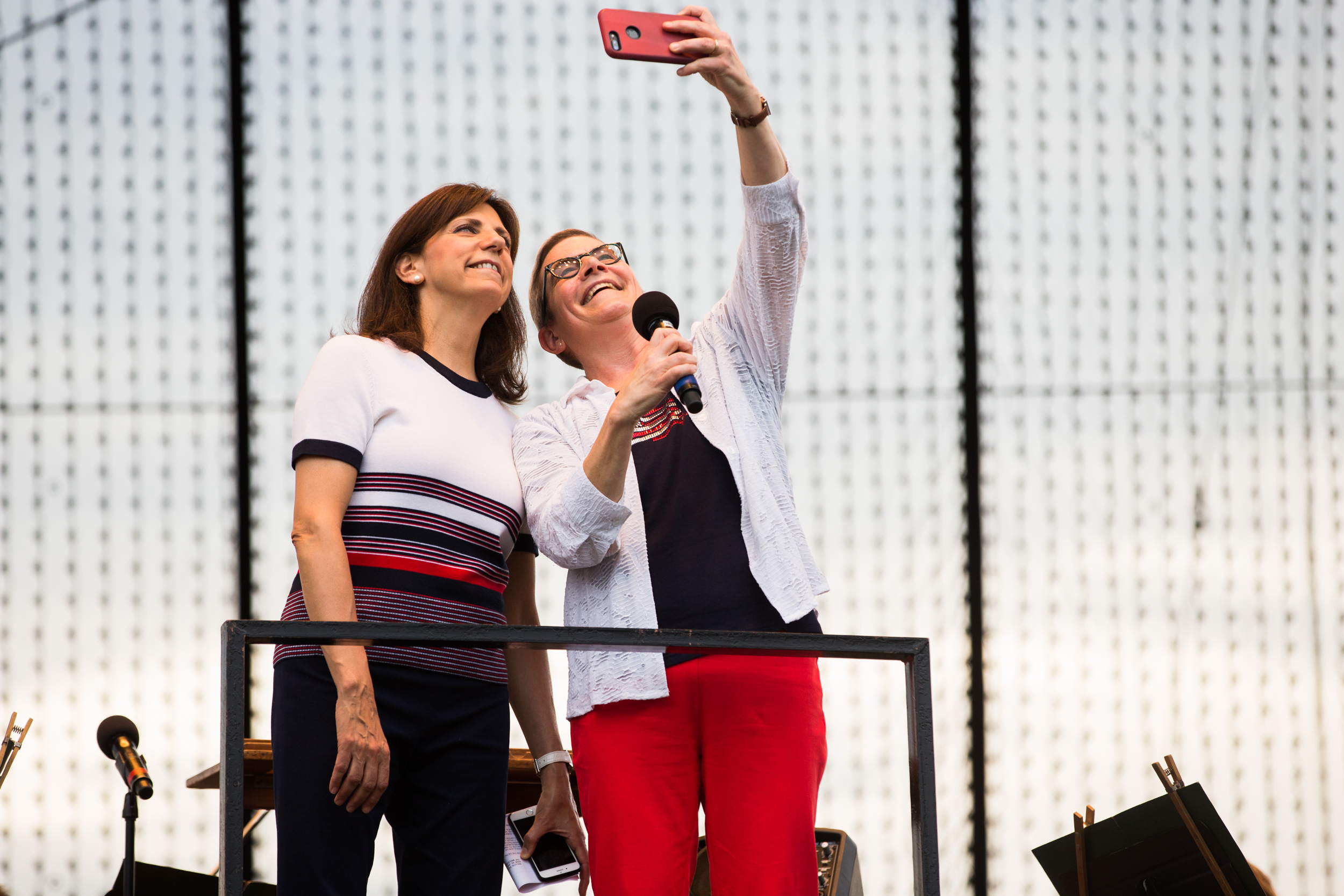 Anne Parsons (at right), then-President of the Detroit Symphony Orchestra, with Patricia Mooradian, President and CEO of The Henry Ford, at Salute to America in 2017.

We are saddened by the passing of Anne Parsons, President Emeritus of the Detroit Symphony Orchestra (DSO). Parsons was the longest-serving executive leader in the DSO's modern era, and she was a tremendous friend to The Henry Ford. We’ve had the great honor and privilege of working with Anne and her teams for more than 25 years with our Salute to America concerts in Greenfield Village.

Please join us in thoughts and prayers for Parsons' family, her friends, and the entire DSO community. 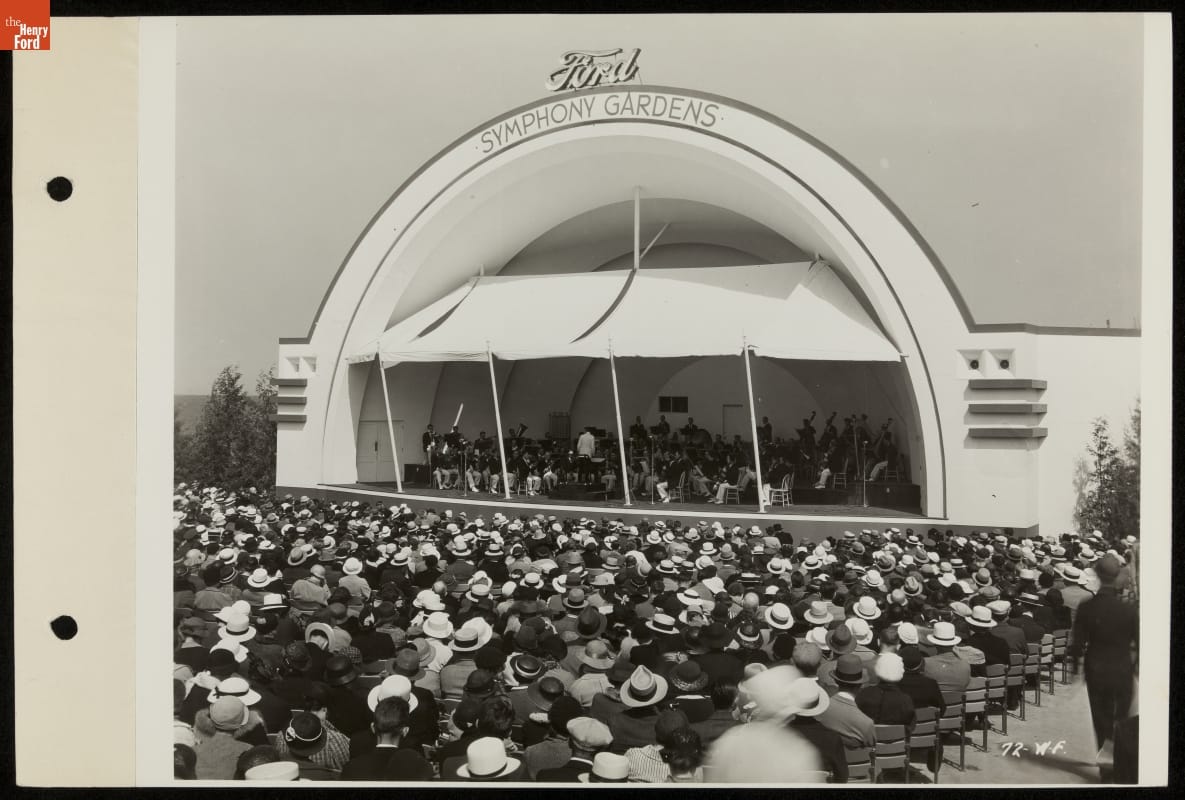 For the past 24 years the Detroit Symphony Orchestra and The Henry Ford have teamed up for Salute to America, our annual concert and fireworks celebration in Greenfield Village. But the affiliation between the DSO and our organization goes back much farther than that. 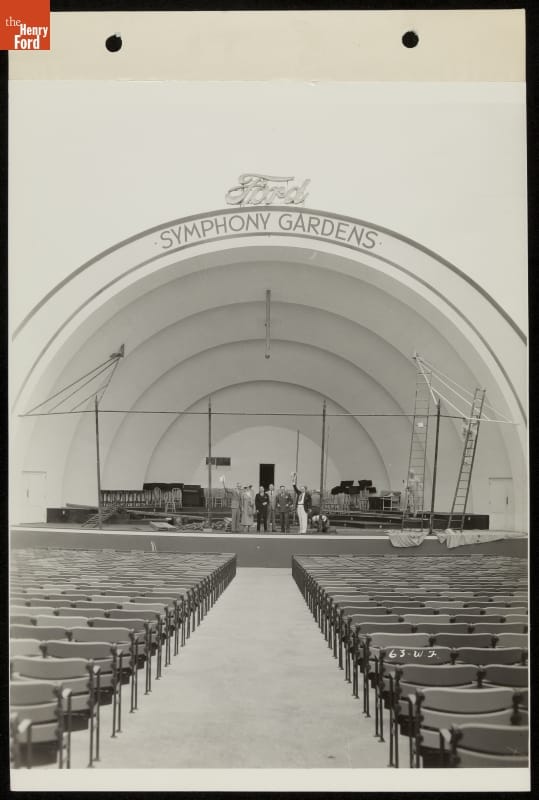 The connection dates back to the 1934 Chicago World's Fair, A Century of Progress International Exposition. Ford Motor Company’s exhibits were housed in the famous Rotunda building and also included the Magic Skyway and the Ford Symphony Gardens. The large amphitheater of the Symphony Gardens hosted several musical and stage acts, including the DSO, who Ford sponsored for 150 concerts over the course of the year. The symphonic notes proved so popular that Henry and Edsel Ford decided to launch a radio program featuring selections from symphonies and operas - the Ford Sunday Evening Hour. The weekly program played to over 10,000,000 listeners each broadcast over the CBS network (the same network that now presents The Henry Ford's Innovation Nation). Musical pieces were played by DSO musicians under the name Ford Symphony Orchestra, a 75-piece ensemble, and were conducted by Victor Kolar, the DSO’s associate director, for the first few years of the show. Pieces ranged from symphony classics including works by Handel, Strauss, Liszt, Wagner, Handel, Puccini, Bizet, and Tchaikovsky (including, of course, the 1812 Overture), to some of Henry Ford’s favorite traditional and folk songs like Turkey in the Straw  and Annie Laurie, and even included popular tunes such as Night and Day by Cole Porter.

Each broadcast featured guest stars, soloists, and singers such as Jascha Heifetz, Grisha Goluboff, Gladys Swarthout, Grete Stükgold, and José Iturbi. The broadcast performances were open to the public for free, first at Orchestra Hall from 1934-1936, and then at the Masonic Temple 1936-1942. The show ran from 1934-1942, September-May with 1,300,000 live attendees and countless radio listeners tuning in. 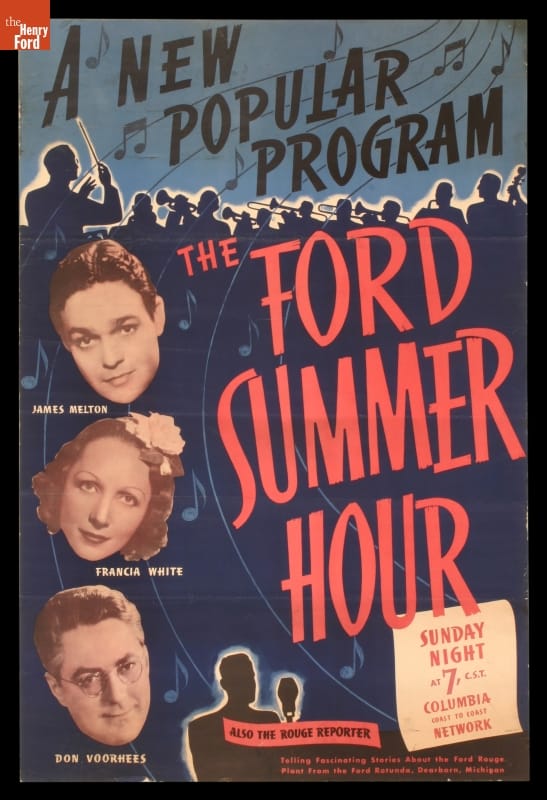 Salute to America is our summer music tradition, and listeners in 1939 must have wanted some summer-themed music as well because Henry and Edsel started the Ford Summer Hour that year. Like the winter program, it was broadcast each Sunday evening on CBS, from May to September and featured a smaller 32-piece orchestra, again mostly made up of DSO musicians. Guest stars and conductors appeared, such as Don Voorhees, James Melton, and Jessica Dragonette.

The show included music from Ford employee bands like the River Rouge Ramblers, Champion Pipe Band, and the Dixie Eight. This was a program of lighter music, popular songs, and tunes from musical comedies and operettas. Apparently not everyone appreciated the lighter fare; a letter from a concerned listener stated:

“...as the strains of the trivial program of Ford Summer Show float into my room, I am moved to contrast them with the fine programs of your winter series, and to wonder why the myth persists that in hot weather the human mentality is unequal to the strain of listening to good music. Pardon me while I switch my radio to station WQXR which has fine music the year round.”

Strong words from the listening public, though apparently not the majority as the summer program rivaled the winter program with about 9,000,000 listeners per broadcast. The Ford Summer Hour, broadcast from the Ford Rotunda, only ran three seasons, but played a wide range of music for listeners such as Heigh Ho from Snow White, Dodging a Divorcee, selections from Carmen, Oh Dear, What Can the Matter Be, and One Fine Day from Madame Butterfly.

Both programs ceased by 1942 with the opening of World War II. Henry Ford II tried to bring back the Ford Sunday Evening Hour in 1945, broadcasting the same type of music by DSO musicians, but times and tastes had changed and the program was discounted after the first season.

This year during Salute to America, guest conductor Bob Bernhardt will join the Detroit Symphony Orchestra during The Henry Ford’s Fourth of July celebration in Greenfield Village. I had a chance to ask Bob, the principal pops conductor with the Louisville Orchestra, a few questions about what he’s most looking forward to next week on Walnut Grove. Continue Reading

What began as an experimental partnership has turned into a much anticipated local tradition. The Detroit Symphony Orchestra and The Henry Ford are teaming up once again in honor of our country’s birthday with its 21st annual Salute to America celebration, July 3-6 from 6:00 p.m. to 10:00 p.m. each night. The pageantry of the evening will be a sheer delight marked by rich Americana music, a spectacular display of fireworks, and the thunderous sounds of cannon fire at the conclusion.

The decision to embark on a partnership for The Henry Ford and the DSO in 1992 was greeted with great enthusiasm, and marked the first time Greenfield Village presented an event of this scale.

“For the first decade of this program, the stage was set in front of Town Hall and seating was on and around the Village Green. It was a great venue but was limited in space,” explained Jim Johnson, Senior Manager of Creative Programs at The Henry Ford.

In 2003 Greenfield Village underwent major restoration including the reconfiguration of buildings around the Village Green. The event planners realized a change in location was needed to accommodate the growing attendance and popularity of the event. In 2004 the program was moved to the Walnut Grove historic district in Greenfield Village where it continues to be hosted to this day, accommodating up to 8,500 attendees and offering ample room to spread out and hillside seating perfect for outdoor concert viewers.

“A great deal of planning goes into the execution of an event this large, but The Henry Ford and the DSO work well together,” explained Johnson. “We meet after each event, talk about any ideas for the next year’s program, then we meet again in mid-winter and begin to put together the upcoming program for July. Once set-up begins in the days before the event each team on both sides steps in and takes care of what is needed.”

The First Michigan Colonial Drum and Fife Corps will once again set the tone for the affair greeting guests with their melodic 18th century music reminiscent of early America while marching through Greenfield Village. The Corps has a long history with The Henry Ford with their debut performance at Greenfield Village in 1975. In addition, 19th and early 20th century games and activities will be offered for children of all ages through Greenfield Village’s Games on the Green program including a visit from members of Greenfield Village’s historic base ball team. Attendees are invited to pack a picnic or they may want to leave their baskets at home and indulge in a selection of the finest foods offered by The Henry Ford’s award-winning chefs, which will be available for purchase. Just before the DSO joins the stage, a prelude concert will be performed by the River Raisin Ragtime Revue.

The DSO begins its performance at 8:30 p.m. each night, and internationally renowned conductor, and DSO Music Director, Leonard Slatkin will lead the symphony this year in all four concerts. This is Slatkin’s fifth season with the DSO and the second time he has performed at Greenfield Village.

“I have conducted many patriotic programs and not only in the United States. Greenfield Village lays claim to an authentic representation of early life and these concerts reflect the heritage of our country,” Slatkin said of the event. In regard to the selection of arrangements for the full length concert, the Maestro said,” …the thrust of the music is American, and although some of the pieces are not exactly patriotic in nature they reflect the diversity of our culture.”

This year the DSO will be saluting John Williams -- one of the most recognized American composers of the modern age, best known for his film scores. “His contribution to America’s cultural life is priceless, and quite new for all of us are the extracts from his score ‘Lincoln’,” said Slatkin.

The concert will include about a dozen different selections with an intermission, and will conclude with Tchaikovsky’s 1812 Overture and a fireworks display. When asked how this overture written to commemorate Russia’s feat over Napoleon’s army became adopted as an American patriotic score, Slatkin said, “This tradition began with the Boston Pops in the 1950’s. Of course it has nothing to do with America but the cannons and fireworks made it seem celebratory. I wish someone would write, perhaps, the ‘1776’ Overture.”

Perhaps this year’s event will be an inspiration to the Maestro himself to compose such an overture.

Amy Alandt is a guest writer to The Henry Ford.