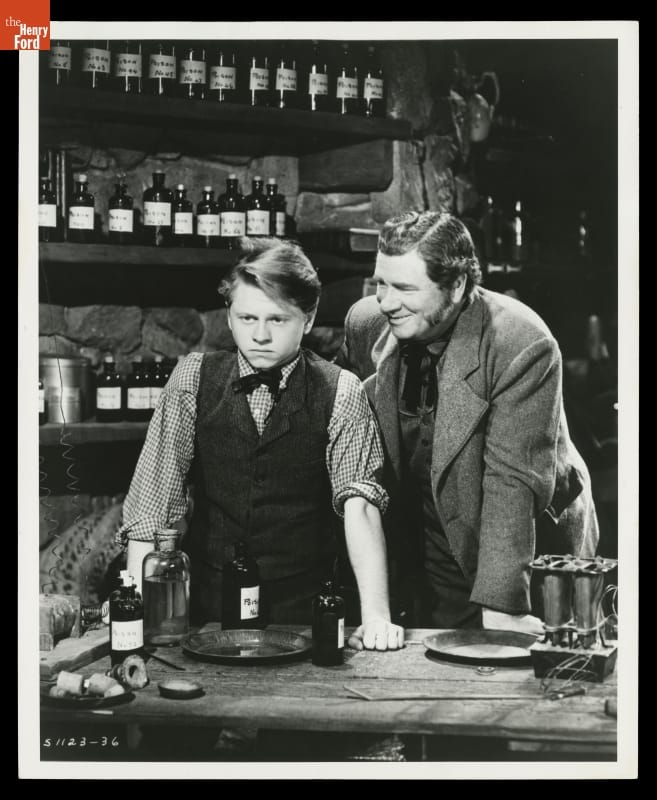 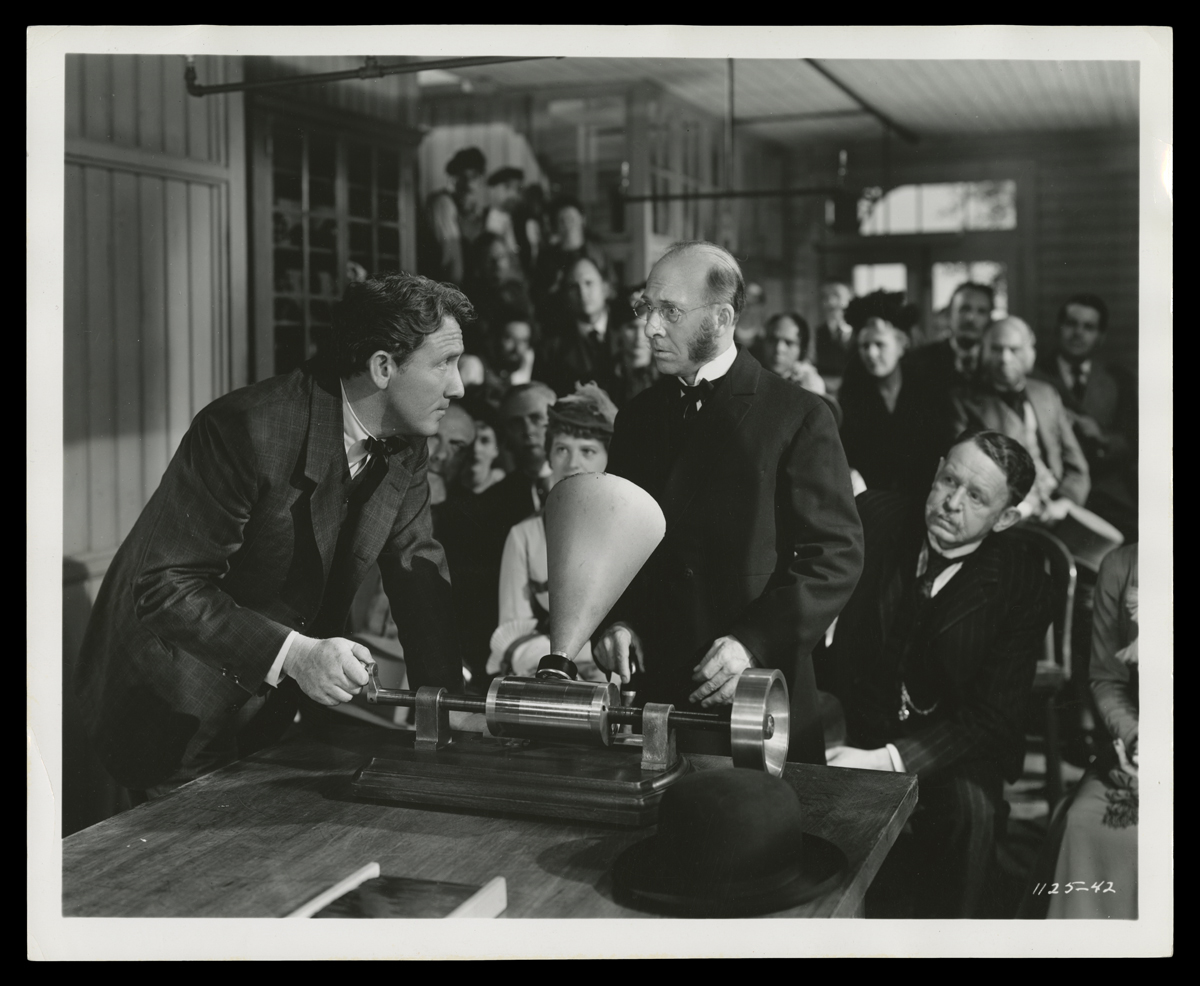 Thomas Alva Edison is an American “superhero.” It is not surprising, then, that his life story found its way into the movies during Hollywood’s golden age. It is, in fact, quite fitting, since Edison and an associate were instrumental in the development of early movie technology in the 1890s.

In 1940, Edison was the subject of not one, but two, Hollywood films: “Young Tom Edison,” starring Mickey Rooney, and “Edison the Man,” starring Spencer Tracy. These classic motion pictures were filmed in California. But Henry Ford’s well-known collection of Edison-related buildings and artifacts in Dearborn played a supporting role in MGM’s research for script development and set design. 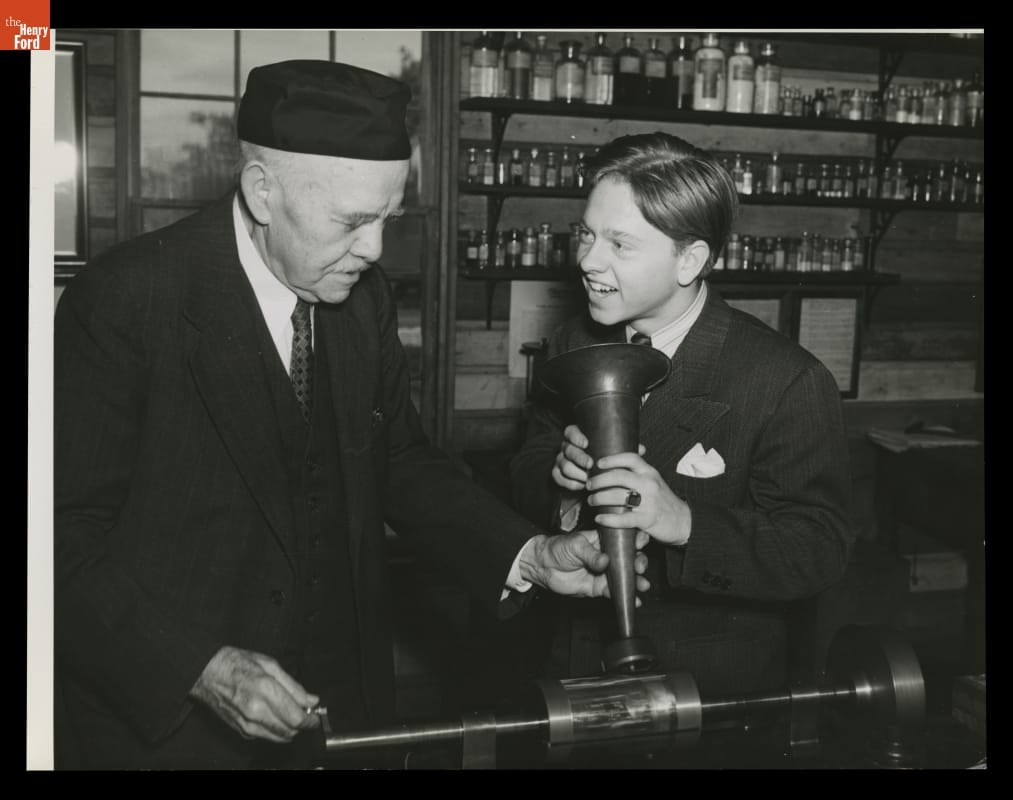 To help prepare for their roles, MGM wanted the actors playing Thomas Edison to visit the Museum and Village to learn more about Edison. Here, Mickey Rooney records his voice on an early Edison tinfoil phonograph. THF125217

In February 1939, MGM scriptwriters Dore Schary and Hugo Butler came to Greenfield Village to see the Menlo Park Laboratory and the Edison-related artifacts in the Museum. (Schary and Butler later received an Academy Award nomination for their script for “Edison the Man.”) MGM also wanted the actors playing Thomas Edison in the films to be inspired by their own visits to Dearborn. Rooney arrived on October 23, 1939, just before filming of “Young Tom Edison” began in Hollywood. Tracy came a few days later. 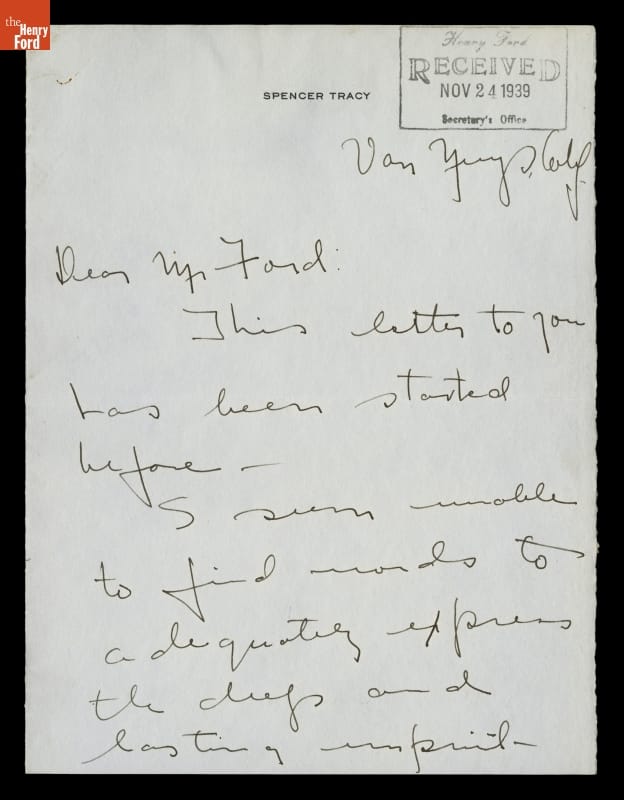 A few weeks after his visit, Spencer Tracy wrote this letter of appreciation to Henry Ford. THF125214

Tracy was deeply impressed by his visit and wrote a letter to Henry Ford, “I am unable to find words to adequately express the deep and lasting imprint my short visit has made upon me…I shall make a supreme effort to do some small justice and no harm to the memory of your dear friend.” 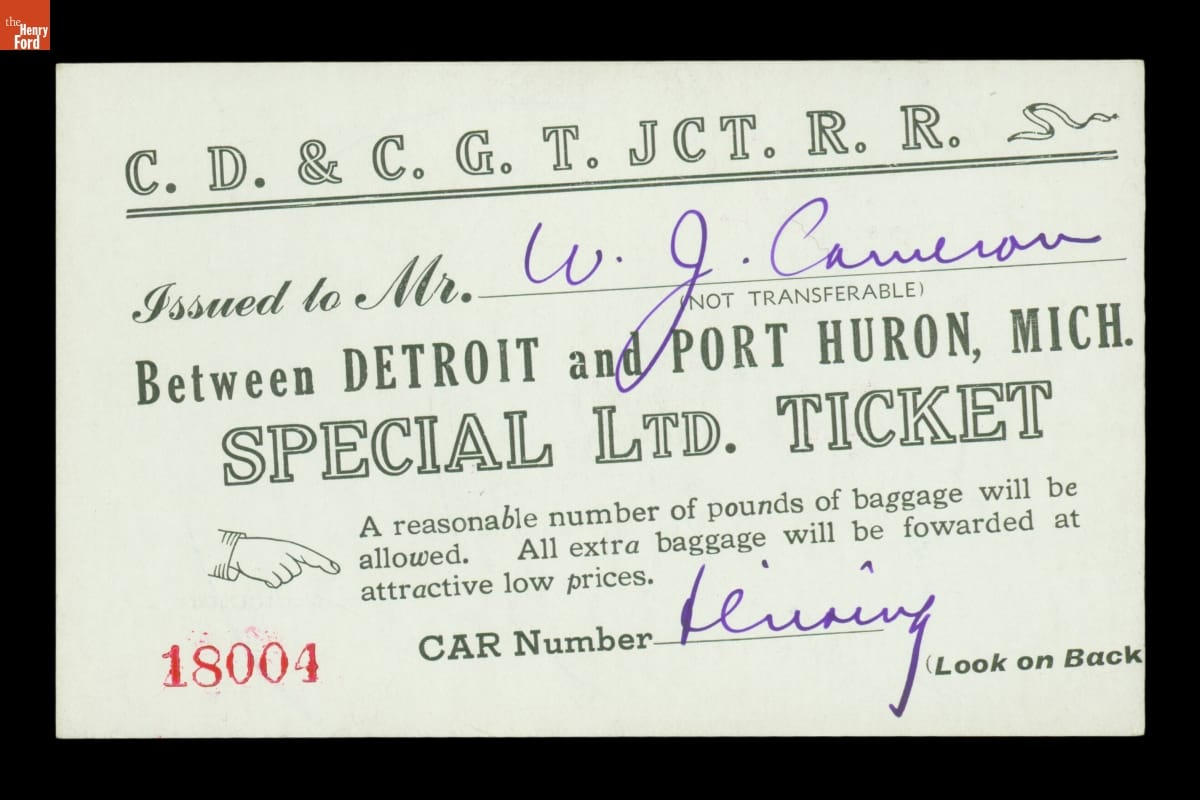 Henry Ford lent an 1850s locomotive and some railroad cars from his museum for the publicity train that carried special guests from Detroit to Port Huron for the February 1940 premiere of “Young Tom Edison.” THF96236, THF96230 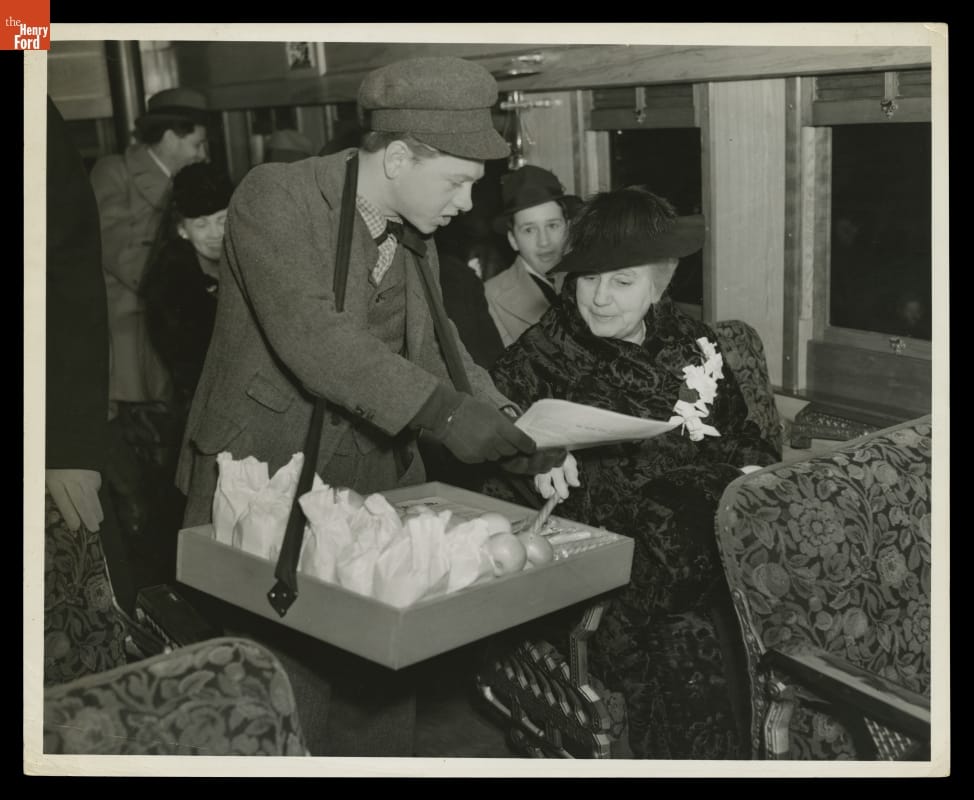 As the train rolled along from Detroit to Port Huron, Mickey Rooney hawked candy and newspapers to the passengers, just as Edison had done as a boy years before. Here, Rooney offers Edison’s widow, Mina Miller Edison Hughes, a newspaper. THF119959 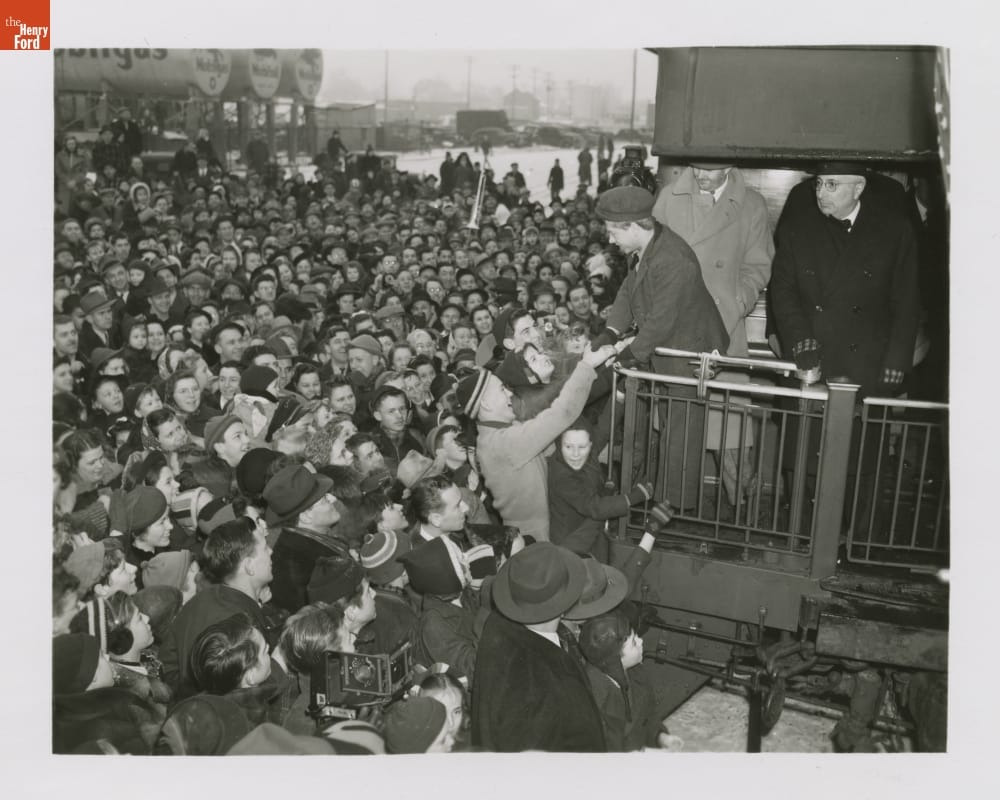 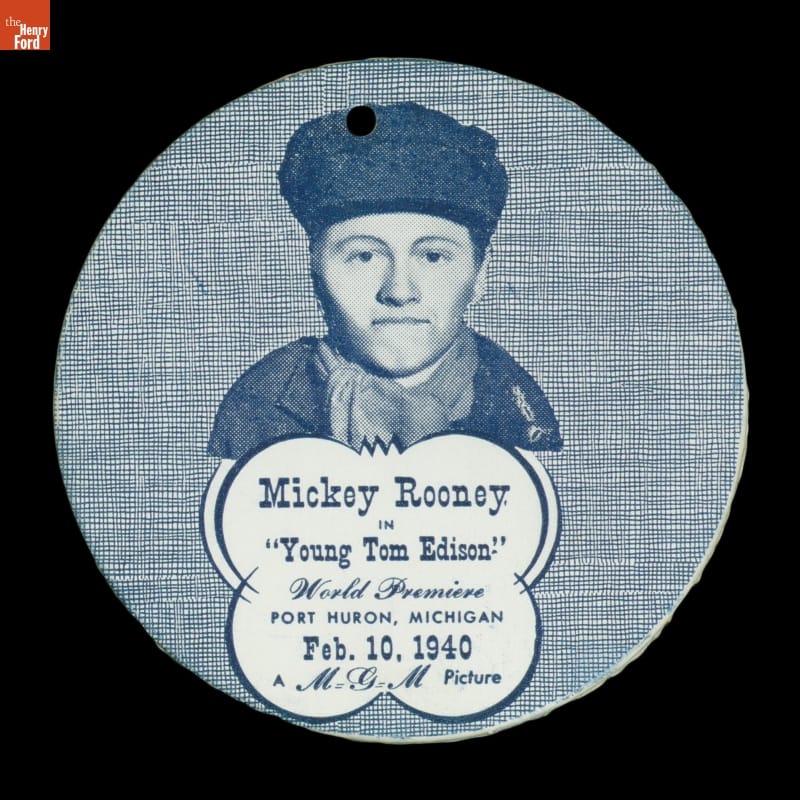 Filming began on “Young Tom Edison” in early November 1939. By Christmas, it was complete, and MGM was planning for the film’s February 10, 1940, premiere in Port Huron, Michigan, where Edison had grown up. The festivities included a train ride from Detroit to Port Huron--the same route traveled by Edison in his youth when he sold candy and newspapers on the Grand Trunk railroad. Artifacts from the Museum added authenticity. Henry Ford loaned the 1858 “Sam Hill” steam locomotive and some train cars for the trip. Among the passengers were the film’s star, Mickey Rooney; Edsel Ford; Thomas Edison’s widow, Mina Miller Edison Hughes; and MGM studio executive Louis B. Mayer. In evening, “Young Tom Edison” premiered at three Port Huron theaters, with Rooney appearing at each. 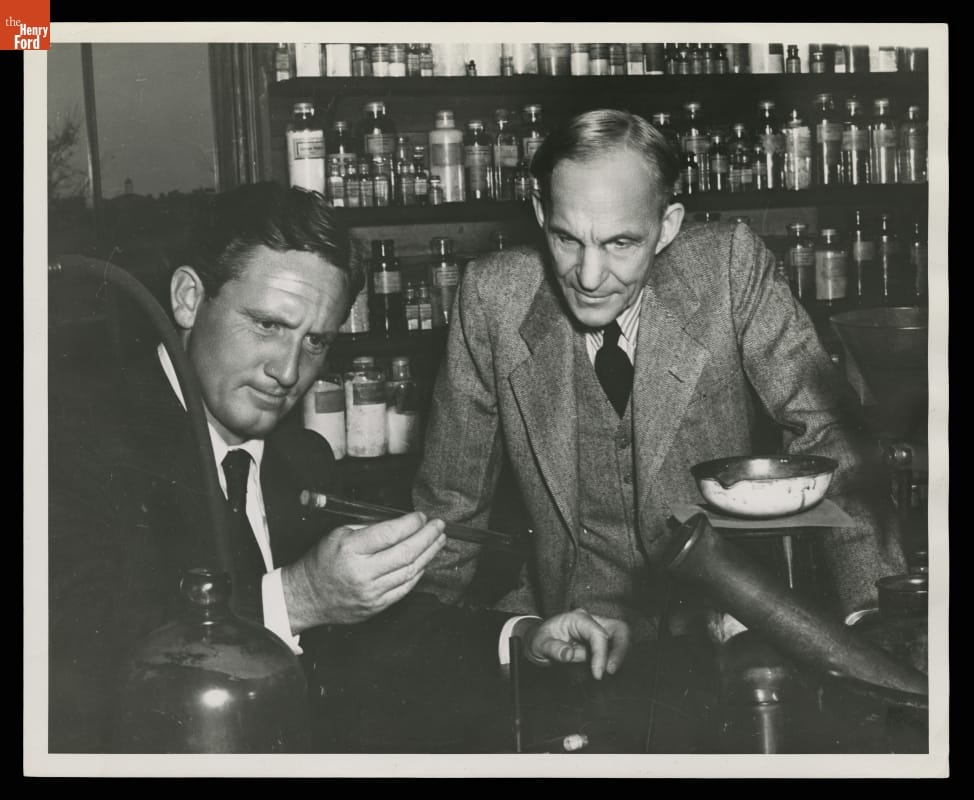 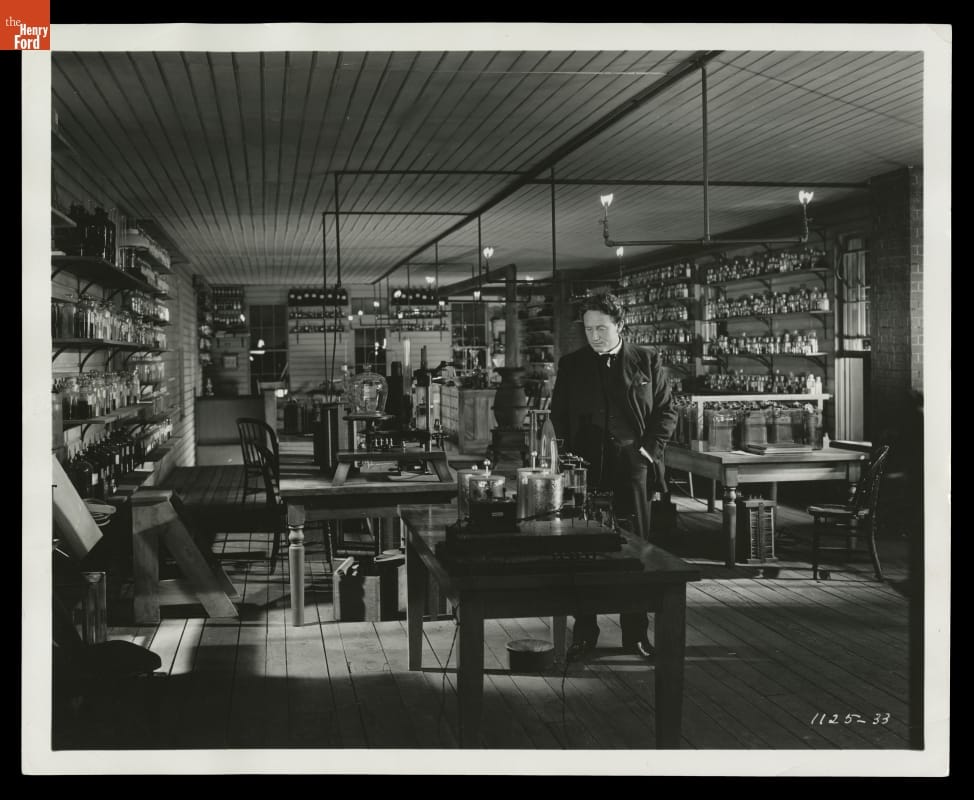 With the help of photographs and other documentation provided by Greenfield Village staff, MGM built an impressive full-sized version of the Menlo Park laboratory in California for “Edison the Man.” The movie set looked astonishingly like its Greenfield Village counterpart! THF125210

In mid-January 1940, filming began on “Edison the Man.” With the help of photographs and other documentation provided by Greenfield Village staff, MGM built an impressive full-sized version of the Menlo Park Laboratory, with its equipment, furnishings, and rows of bottles on the shelves. The movie set looked astonishingly like its Greenfield Village counterpart.

During the filming, Henry Ford put William Simonds on loan to MGM as a technical assistant. Simonds, a public relations manager for the Village and Museum, had published an Edison biography five years before. During the two-month filming of “Edison the Man” at MGM, Simonds reported back regularly. His letters provide an engaging behind-the-scenes look at the making of this classic Hollywood film.

Simonds told how Rita Johnson’s nervousness at playing her first big role--as Edison’s wife Mary--forced extra takes to complete some scenes. In one instance, Tracy ate five pieces of apple pie during numerous retakes of a scene. Simonds humorously described director Clarence Brown facing a long line of mothers and crying babies to choose an infant to play Edison’s child. He revealed how the stage crew had to scramble to repair the damage when part of the Menlo Park Laboratory set fell over, breaking many of the “chemical” bottles and spilling colored water all over the floor. 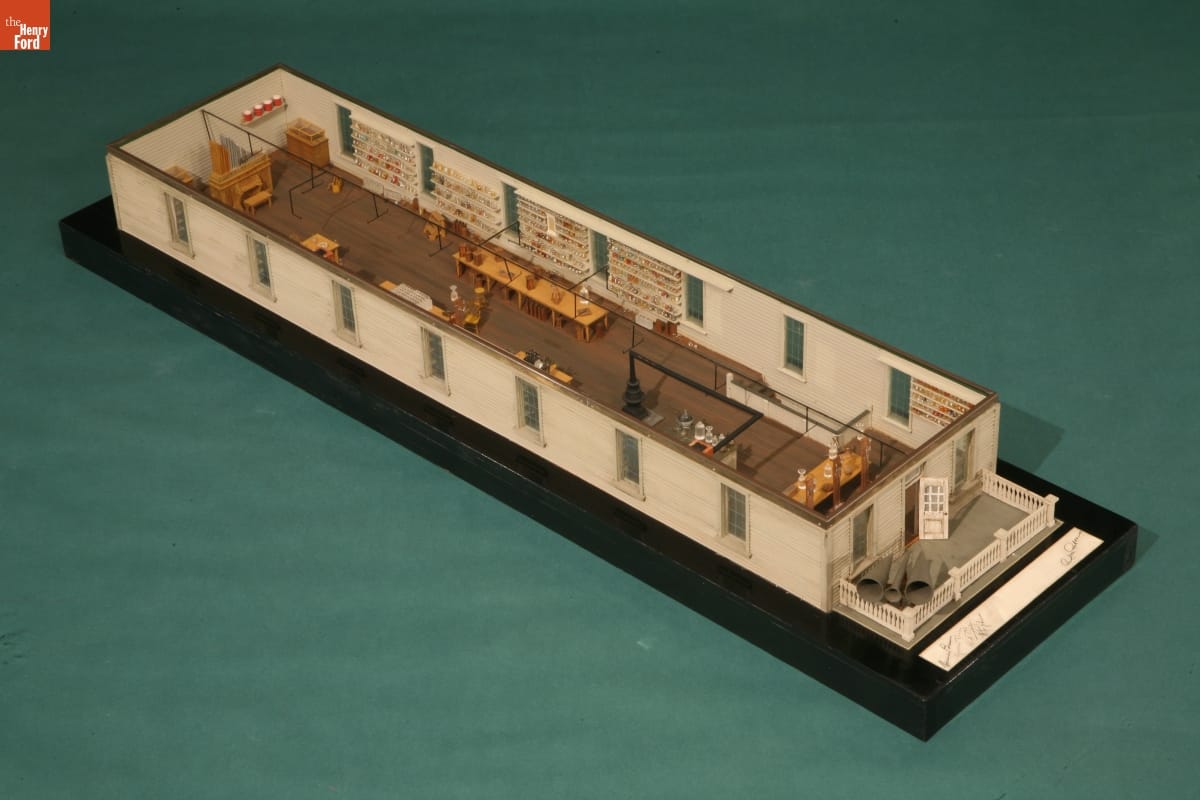 Filming of “Edison the Man” wrapped up in mid-March 1940 and it premiered May 16, 1940. There had been talk of holding its premiere in Dearborn, but, at the request of Edison’s son Charles, the film premiered in West Orange, New Jersey, where Edison developed many of his later inventions.