Those who decorated for Christian holidays made the gathering of evergreens a ritual. Families and friends ventured into the woods and cut conifers and other wintergreens to festoon churches, ballrooms, and private homes. This post focuses on the process of acquiring the iconic Christmas tree, a conifer or cone-bearing tree, evergreen because it retained its foliage throughout the winter season and prized for its shape, color, aroma, and association with gift-giving. 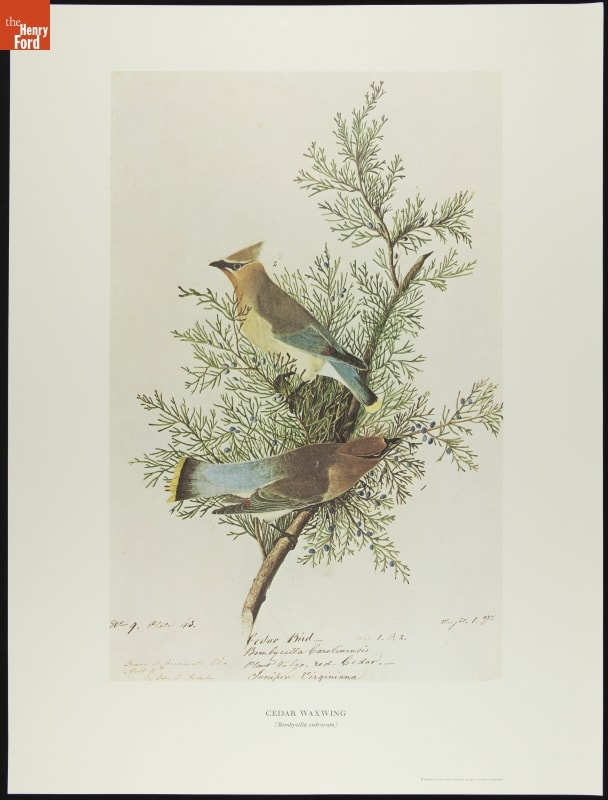 Across the southern and eastern United States, the eastern red cedar (really, a juniper) proved a popular tree choice for those who could cut their own. The tree grew rapidly along the edges of woods, encroaching into fields and pastures. Thus, removing a few trees to deck the halls at Christmas time also served the purpose of containing the juniper and retaining arable land and pasture.

The balsam fir (Abies balsamea) appealed to landowners for many of the same reasons. A report in the Detroit Free Press (December 10, 1901) explained that in Maine, the “young firs, which are almost exclusively used for Christmas trees, are good for nothing else—in many sections being considered a nuisance, as they grow like burdocks and crowd out better trees.” Harvesting the trees for urban markets became a festive occasion as the reporter explained, with “whole families going into the woods and taking their dinners along.” 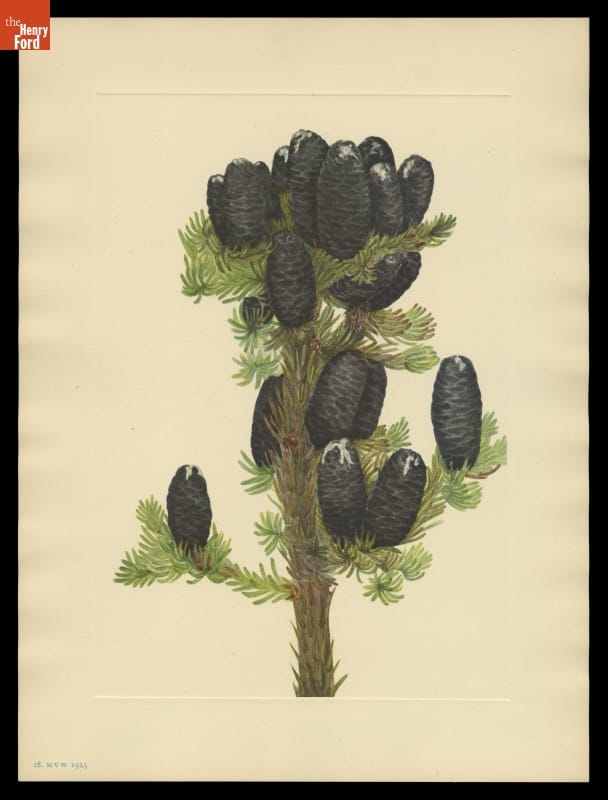 The subalpine fir (Abies lasiocarpa), also known as the Alpine fir, grew in the high-elevation forests of the Canadian Rockies and western United States. It was much less easily accessible for families harvesting their Christmas tree, but its tall profile and stout branches appealed to Christmas tree shoppers none the less.

Bringing evergreens into private and public spaces during the darkest days of the year (the winter solstice) offered hope for the next growing season. Germanic people receive credit for adding light to the conifer. An 1836 illustration, “Christmas Eve,” showed a Christmas tree with candles aglow. The editor explained this as a well-known German tradition “that almost every family has its Christmas tree covered with a hundred lights and many beautiful gifts, and surrounded generally by a little group of happy beings” (The Stranger’s Gift: A Christmas and New Year’s Present, edited by Hermann Bokum and published in Boston by Light & Horton in 1836, page 9).

The hand-tinted lithograph below, of a boy carrying a tree and a girl carrying a bundle of greens, printed in Hamburg, reinforced a tradition that increasing numbers of German immigrants brought with them to America during the mid-19th century. 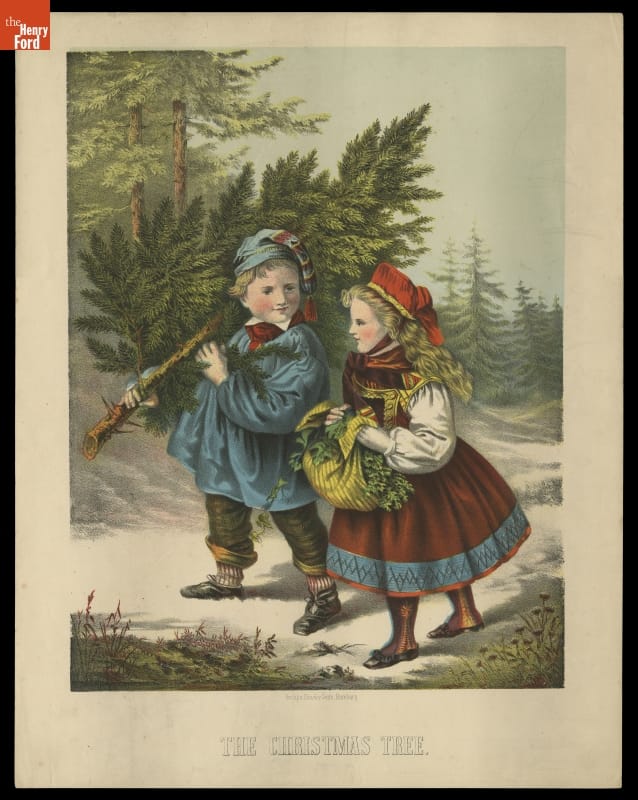 By 1867, “the pleasant Germanic custom of gathering the family round a Christmas tree ... has become thoroughly domesticated in this country.” So declared Harper’s Weekly (December 18, 1867) in a brief explanation of the reasons why families no longer hung stockings ‘neath the chimney with care, but instead hung presents from Christmas trees. A full-page illustration of “The Christmas Tree” further emphasized the point. 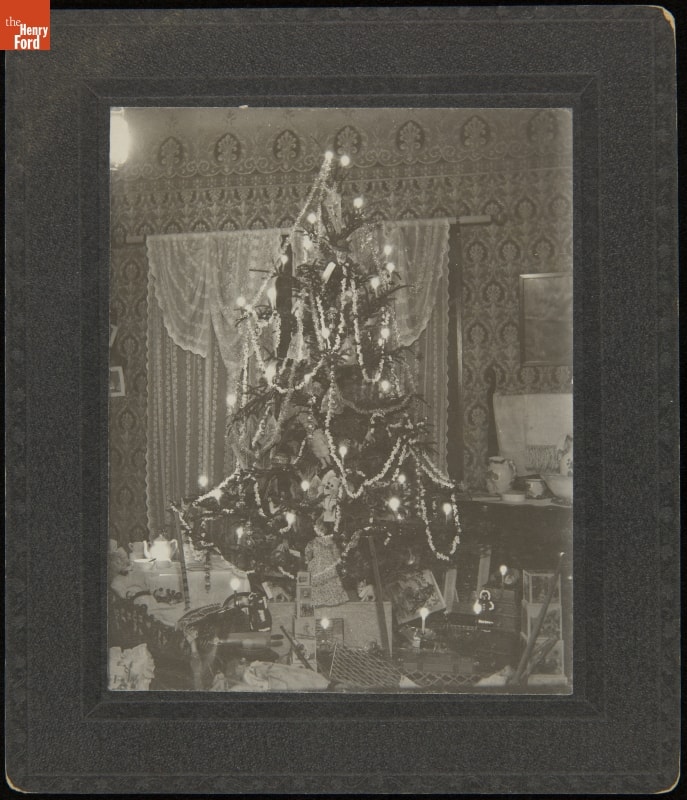 The bucolic imagery of bringing a Christmas tree home through snowy fields to a rural farmhouse contrasted with the risky business of tree markets. 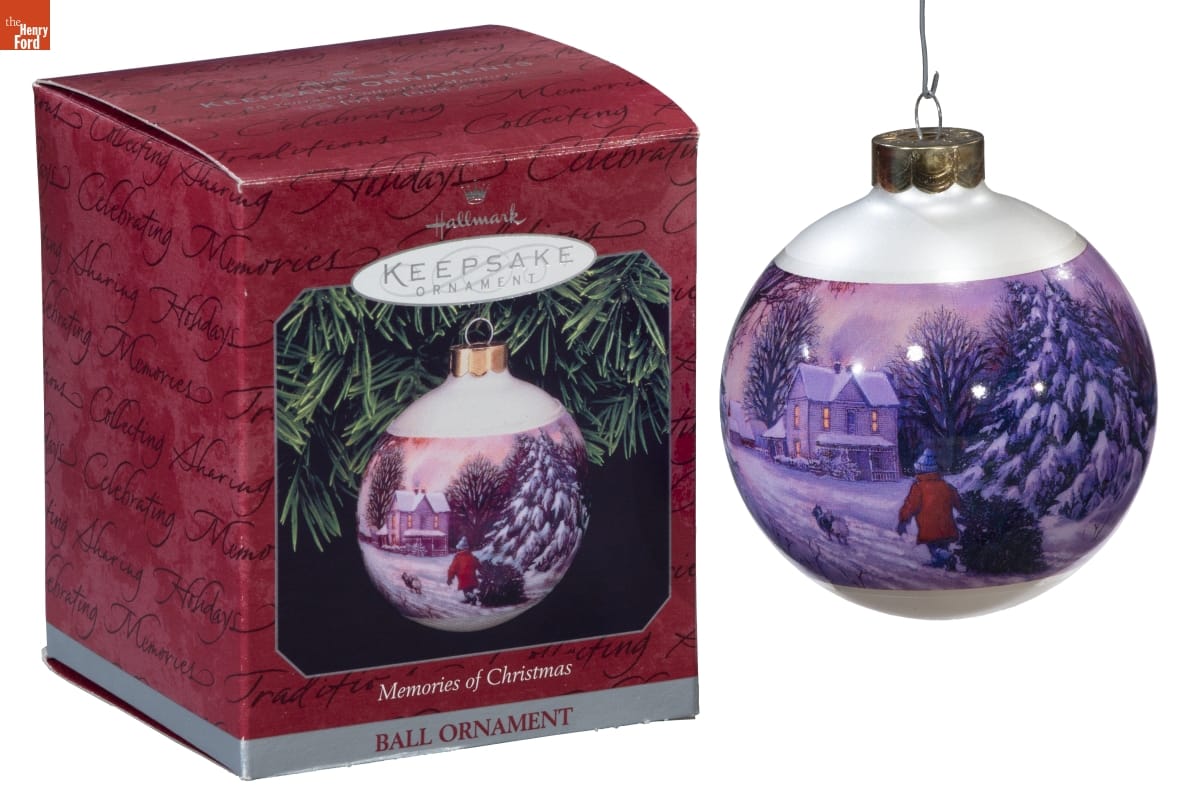 Families invested their labor in tree harvests. “A man cuts the trees close to the roots and a boy or a strong girl clips away with a sharp hatchet the few dead branches near the base. Women and boys tie the trees into bundles of a dozen each, binding them with strong cords, and then the harvest is piled into hayricks and taken to the nearest railroad station.” Often middlemen stepped in. As the New York World reported (reprinted in the Detroit Free Press, December 10, 1901), “the evergreen harvests are generally bought by men who make a business in winter of supplying the holiday green markets of large cities.”

Families cutting conifers for urban markets, middlemen trying to sell them, and customers trying to buy them all relied on railroads to move the perishable cargo. This seasonal business was no holiday (to borrow colleague Matt Anderson’s turn of phrase in his blog post, “Winter Railroading was No Holiday”). 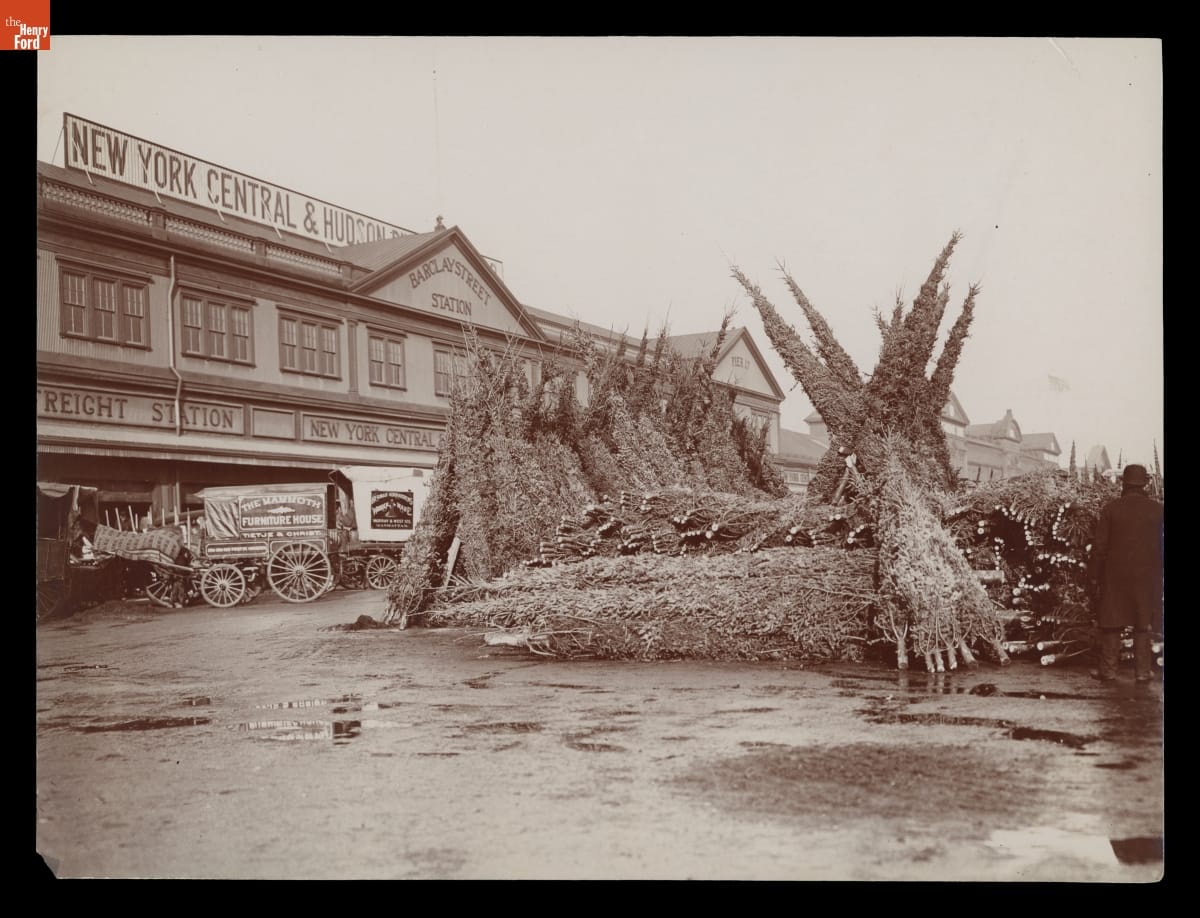 Christmas Tree Market, New York City, Detroit Publishing Company, circa 1903. Another view of this market at Barclay Street Station shows smaller trees in bundles to the left of the taller trees. These fit more closely the trees bound up by Maine families and shipped by train to the city, as described in the New York World article mentioned elsewhere in this post. / THF144363

Urban customers had little time to waste because trees arrived close to Christmas day. The Detroit Free Press reported that “Christmas trees, that is to say evergreens, are up in the market” (December 21, 1879). This arrival a few days before the holy day/holiday remained fairly consistent during the 19th century. A decade later (December 20, 1889), the Free Press reported, “Christmas trees have appeared on the market.”

What did these conifers cost? During December 1901, prices depended on tree height: “For trees five to six feet tall the buyers in Maine pay five cents, and for trees six to ten feet tall ten to fifteen cents. In the city these trees bring twenty-five cents to $1” (New York World reprinted in the Detroit Free Press, December 10, 1901). Note that these prices are likely per foot, not per tree.

Whether families cut their own or paid market price for their conifer, photographs of home interiors indicate the ways they decorated. 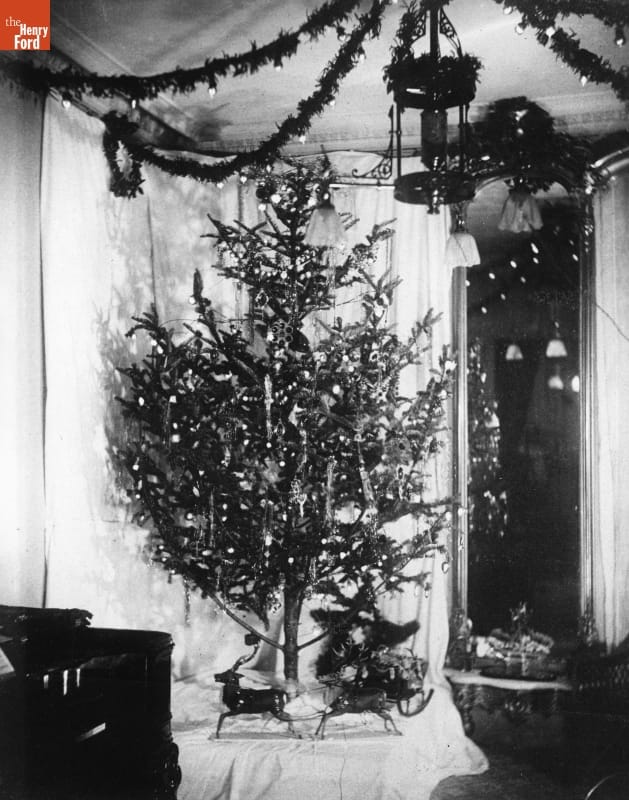 A magnifying glass and close inspection of the original print could confirm the tree type that Edward Hibberd Johnson, wife Margaret, and their three children (Edward H. Jr., Edna, and Lillian) enjoyed as of December 22, 1882. Subscribers to the Detroit Post and Tribune could read about this first tree lit with electric lights—80 red, white, and blue bulbs, hand wired—as reported by journalist William Augustus Croffut. The Johnson family (or their staff) also strung electric lights in the garland running from window treatments to the ceiling light fixture. Readers of Croffut’s article might even have anticipated the possibilities in Detroit, because the Western Edison Light Company had just offered an Edison incandescent light plant for use at Detroit’s Central Market. Detroit’s Committee on Gas was considering the proposal (Detroit Free Press, December 6, 1882). 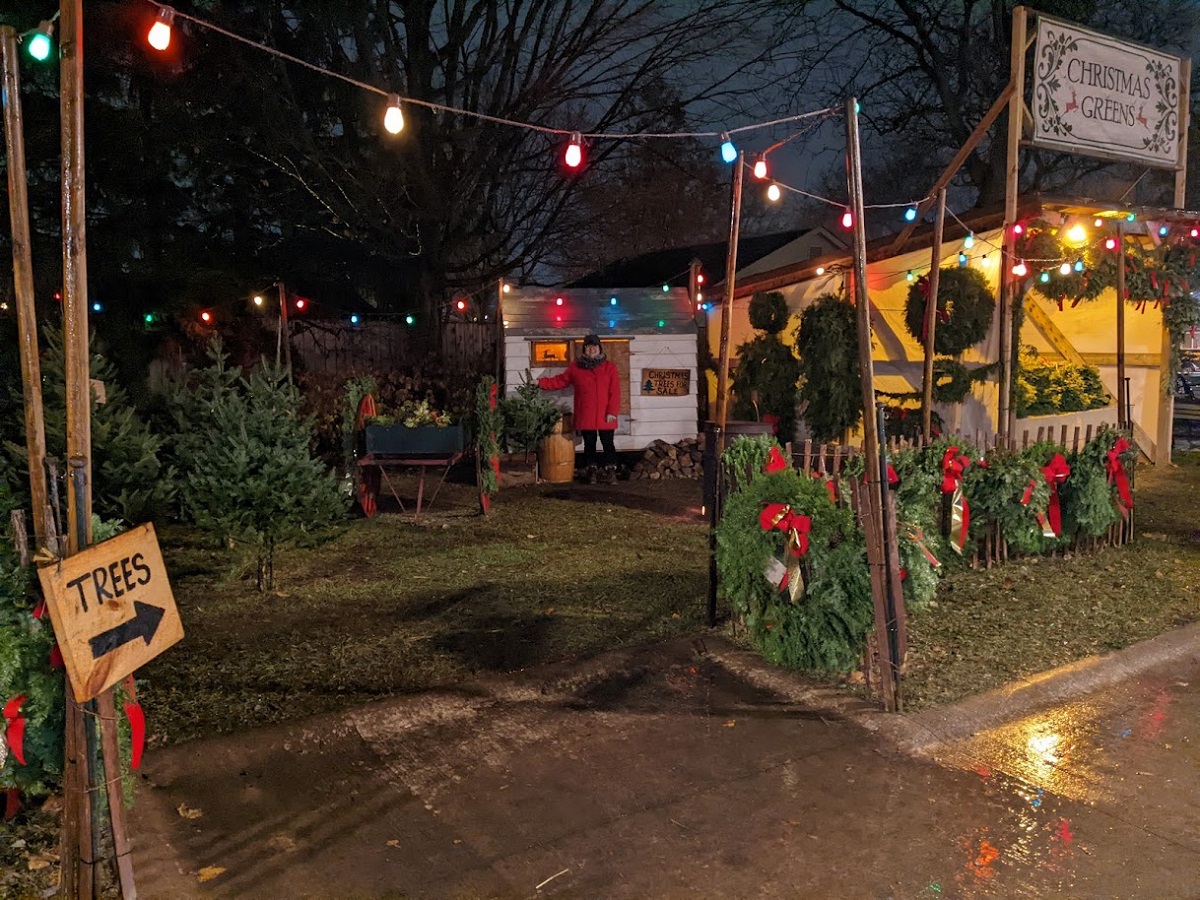 Today, Holiday Nights in Greenfield Village features winter greens and conifer trees in several residences and across the decades from the Ford Home (1870s) and Edison Homestead (1910s) to Cotswold Cottage (1940s). Menlo Park features the 1880 premiere of an electric distribution system, and Edison Illuminating Company’s Station A explores the history of Christmas tree lighting. The tree and greens markets (both in Greenfield Village during Holiday Nights and outside Henry Ford Museum of American Innovation) convey the joy and anticipation of bringing evergreens into the home ready for decorating in the spirit of the season.

Greenery and lights can brighten these dark nights of the winter solstice for all.