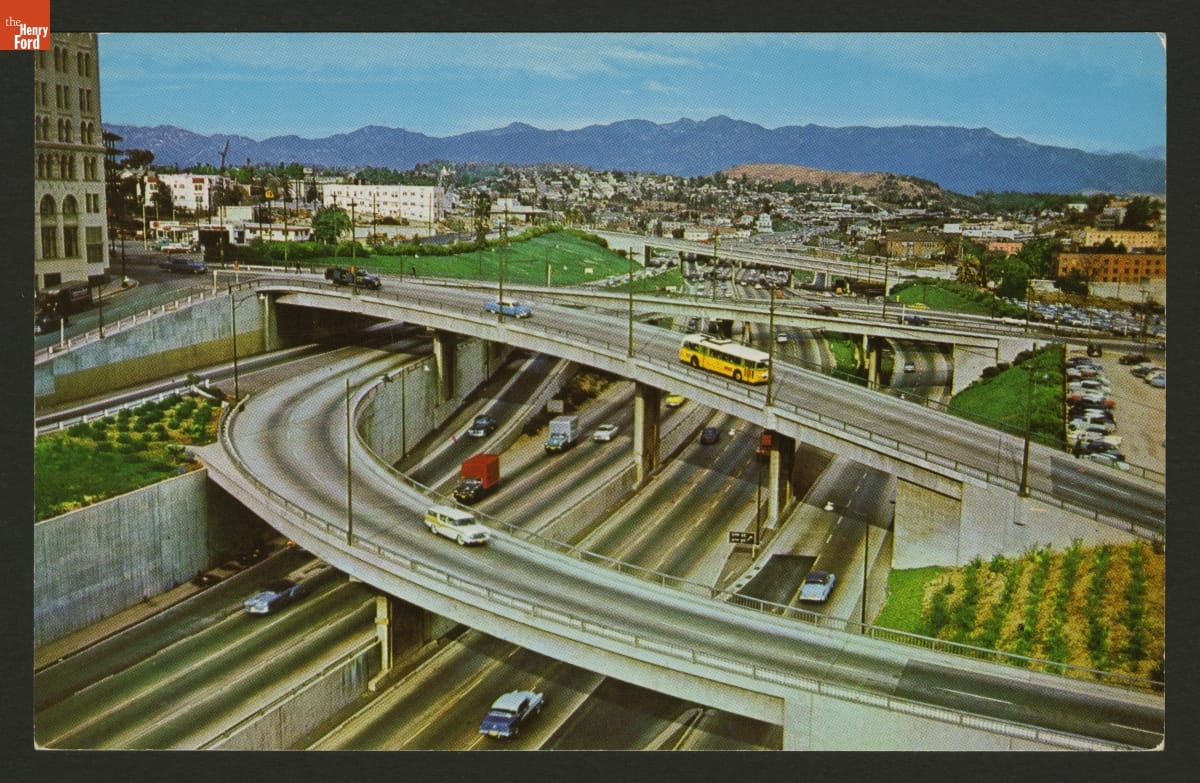 America’s car culture is a subject for music, movies, and postcards—and for serious study and preservation. / THF104062

There’s an exciting new changing exhibit in Henry Ford Museum of American Innovation. In partnership with our friends at the Hagerty Drivers Foundation, we’re spotlighting some of the nation’s most significant automobiles and trucks. Some of these vehicles introduced new ideas in engineering or design, others found glory on the race track, and a few lit up the silver screen. In all cases, these vehicles left a mark on American history important enough to earn them a place on the National Historic Vehicle Register.

We inaugurate this collaborative display with a car from the world of popular culture. For those of us who were teens in the 1980s, the movies of writer-director John Hughes were inescapable. Films like Sixteen Candles, The Breakfast Club, Weird Science, and Pretty in Pink captured the Reagan-era teenage zeitgeist—and timeless teenage angst—to a T. But for self-styled Gen-X slackers, one film in the Hughes catalog stands above the rest: Ferris Bueller’s Day Off.

There’s probably no need to summarize the well-known plot (see here if you disagree). Suffice it to say, high school senior Ferris (Matthew Broderick) convinces best friend Cameron (Alan Ruck) and girlfriend Sloane (Mia Sara) to join him on his own personal skip day through Chicago. The plot really gets rolling, so to speak, when Ferris convinces Cameron to let them take his father’s 1961 Ferrari 250 GT California on their adventures. It doesn’t end well. The Ferrari becomes the target of Cameron’s longstanding anger with his father, and its accidental destruction forces some serious interpersonal growth. 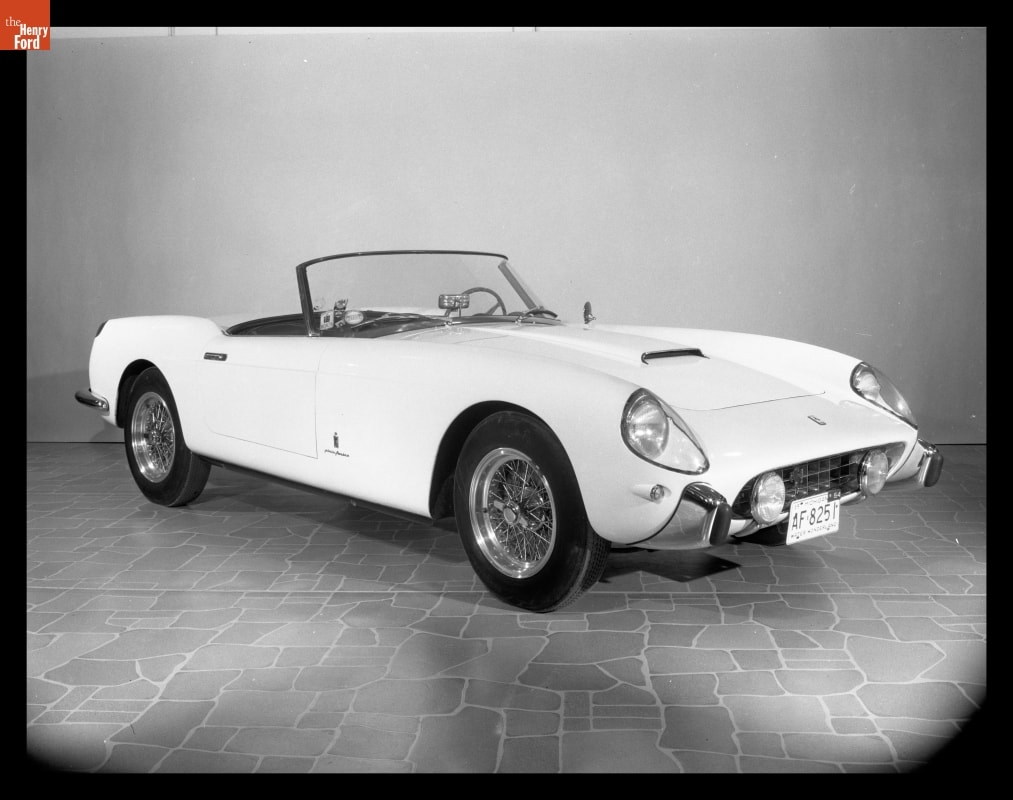 We’re delighted to be able to exhibit that Ferrari. Well, not that Ferrari… the one that got destroyed. For that matter, what we’re showing isn’t even a Ferrari. It’s a 1985 Modena Spyder California—an authentic-looking replica built by Modena Design & Development in El Cajon, California. It’s one of three Modena replicas used in shooting the movie. (Even in the mid-1980s, a genuine Ferrari 250 GT was too valuable to risk in film work.) This beloved pop-culture car is a playful way to kick off our celebration of a serious project: the National Historic Vehicle Register.

The National Historic Vehicle Register has its roots in the Historic American Engineering Record (HAER). Established jointly in 1969 by the National Park Service, the American Society of Civil Engineers, and the Library of Congress, HAER documents significant sites and structures associated with America’s engineering and industrial history. According to established HAER guidelines, nominated structures are documented with written reports, photographs, and technical drawings. These materials are then deposited in the Library of Congress. Generally, a listing in the HAER does not, in itself, protect a structure from possible demolition. It does, however, “preserve” that structure for the future via HAER’s extensive documentary materials.

HAER has documented buildings, bridges, and even airplanes, but it’s never documented cars. Recognizing the need for some similar mechanism to record significant automobiles and trucks, the Historic Vehicle Association (HVA) was formed in 2009. Modeling itself on HAER, the HVA had four founding principles:

The Historic Vehicle Association, in collaboration with the U.S. Department of the Interior, established the National Historic Vehicle Register (NHVR) in 2013 and, in January 2014, it added the first car to its list. HVA selected a 1964 Shelby Cobra Daytona Coupe, one of six built by Carroll Shelby and his Shelby American team to compete in sports car races. Apart from Mr. Shelby himself, the Cobra Daytona Coupe was also developed with legendary racing figures like Pete Brock, Ken Miles, and Phil Remington. 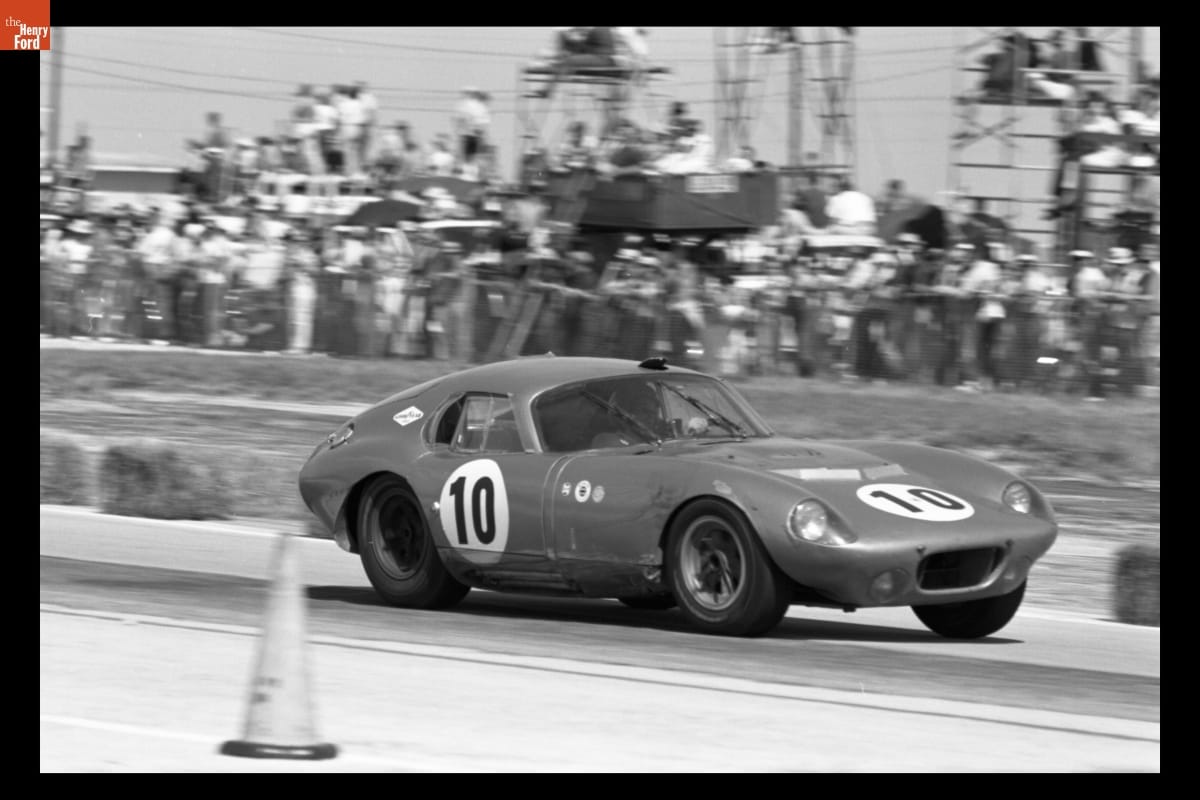 We should pause to note that, of necessity, the National Historic Vehicle Register contains individual cars. The register does not list the Cobra Daytona Coupe as a model. Rather, it specifically includes chassis number CSX2287—the first of the six built, and the only one built completely at Shelby American’s Venice, California, shop. CSX2287 won the GT class at the 1964 Sebring 12-Hour race, competing as number 10, with drivers Dave MacDonald and Bob Holbert. The car later set 27 national and international land speed records at the Bonneville Salt Flats, with Craig Breedlove at the wheel. CSX2287 is now in the collections of the Simeone Foundation Automotive Museum in Philadelphia, Pennsylvania.

Following its selection, the Cobra Daytona Coupe—like all subsequent vehicles on the register—was thoroughly documented for the NHRV. Specialists researched the car through written documents and spoken interviews, they photographed it from multiple angles, and they measured the car using sophisticated laser scanners. (You can learn more about the scanning process in this clip from The Henry Ford’s Innovation Nation.) The resulting materials were then sent to the Library of Congress for long-term preservation.

The Historic Vehicle Association was founded with philanthropic support from Hagerty, the world’s largest specialist insurance provider for historic vehicles. In more recent years, the work of the HVA has been folded into the Hagerty Drivers Foundation, which manages the National Historic Vehicle Register with the U.S. Department of the Interior. 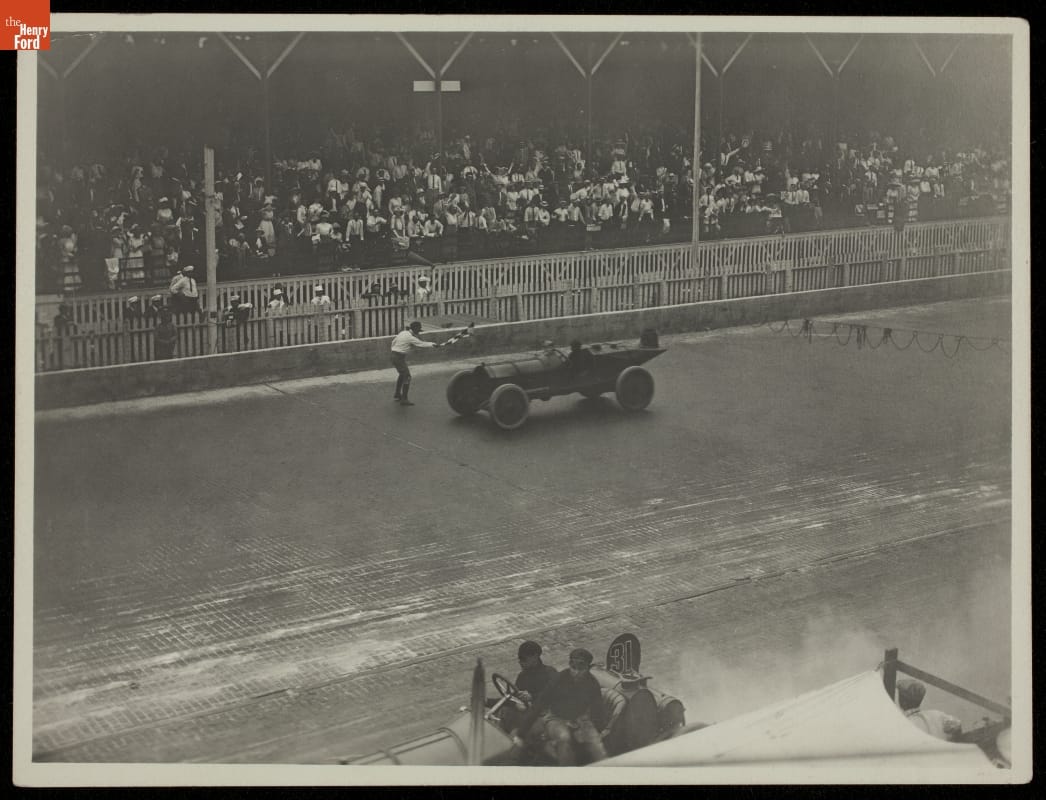 To date, more than 30 vehicles have been added to the National Historic Vehicle Register. There are celebrated race cars like the 1907 Thomas Flyer that won the 1908 New York to Paris Automobile Race, the 1911 Marmon Wasp that won the first Indy 500, and one of NASCAR’s “Fabulous Hudson Hornets” driven by Herb Thomas. 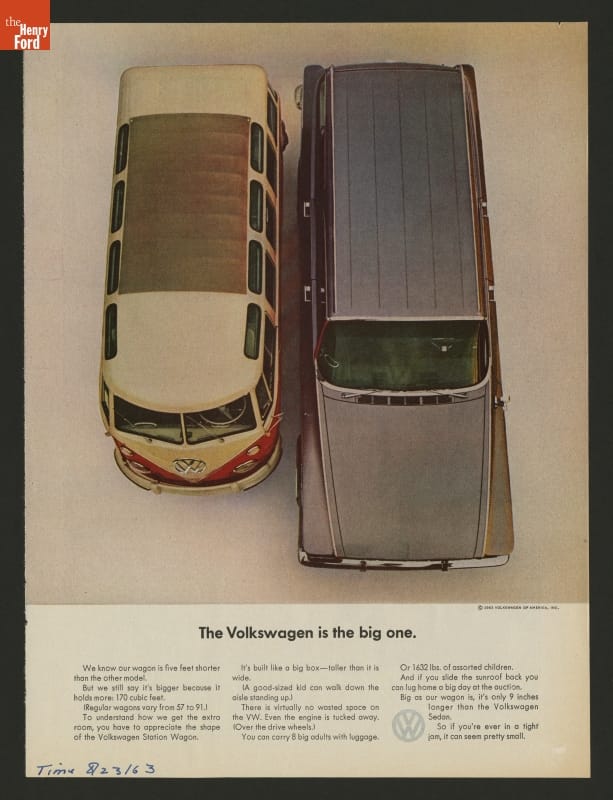 Volkswagen’s groundbreaking Type 2 Transporter is represented on the NHVR by a van that served a higher purpose: supporting Black Americans in the Civil Rights Movement. / THF105564

There are vehicles that participated in large national events, like a 1918 Cadillac employed by the U.S. Army in World War I, or a 1966 Volkswagen Transporter used in humanitarian efforts supporting Black Americans on Johns Island, South Carolina, during the Civil Rights Movement, or a 1969 Chevrolet Corvette driven by Apollo astronaut Alan Bean, who landed on the Moon in November 1969. 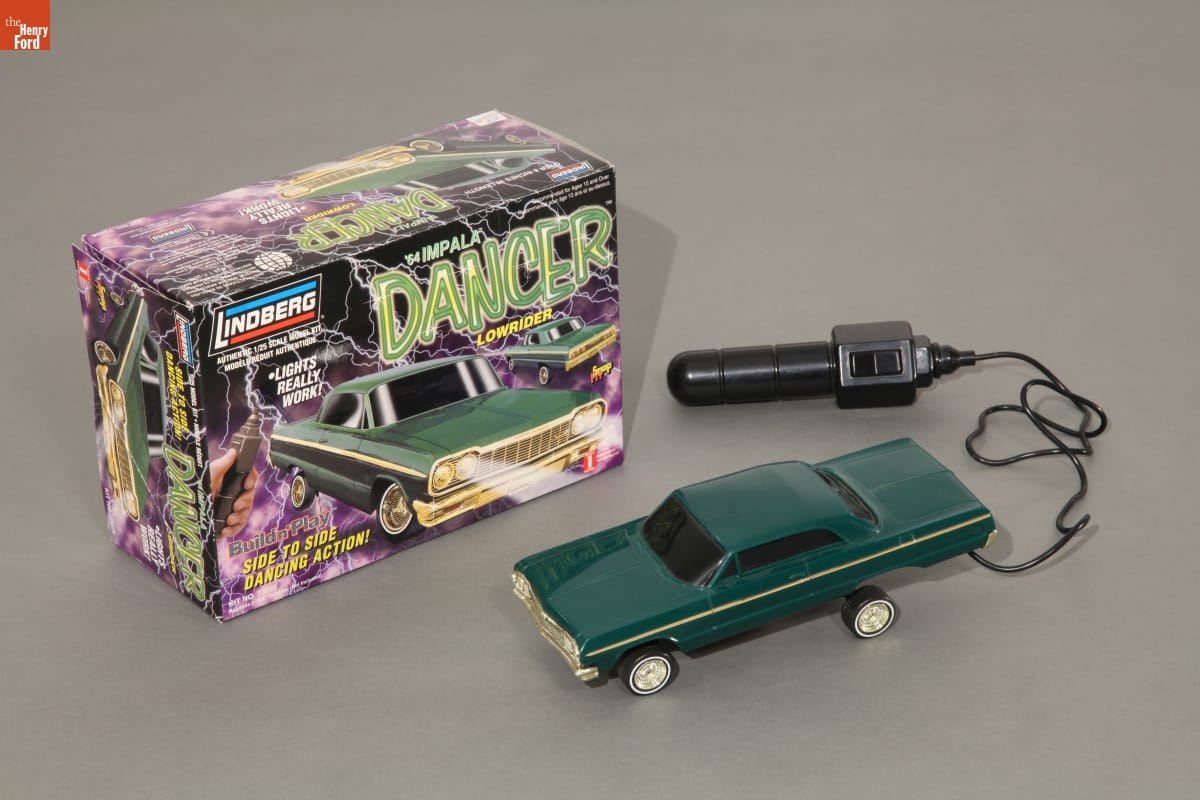 The 1964 Chevrolet Impala lowrider is a car culture icon, illustrated by this remote-controlled model. / THF151539 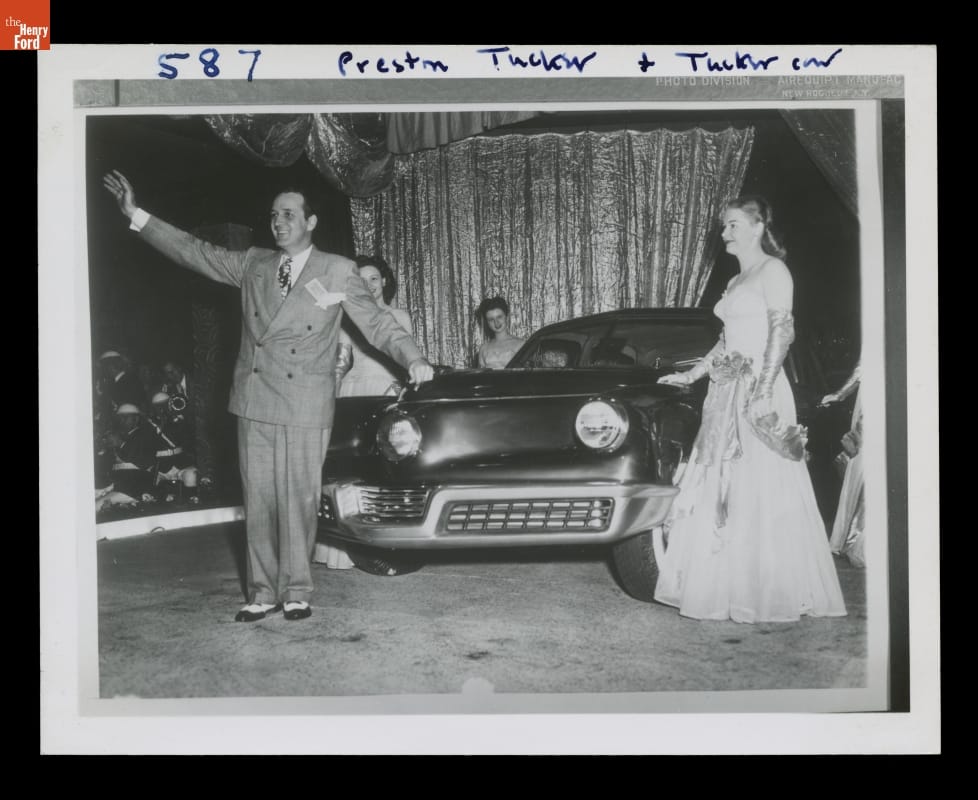 The register doesn’t overlook the automobile’s contributions to popular culture. Apart from the replica Ferrari used in Ferris Bueller’s Day Off, the list includes a 1968 Ford Mustang driven by Steve McQueen during the influential car chase in Bullitt, and a 1981 DeLorean DMC-12 that carried Michael J. Fox’s Marty McFly to 1955 before returning him back to the future. Preston Tucker’s 1947 Tucker 48 prototype is something of a movie car too. Yes, it inspired a real-life production vehicle, but it also inspired the 1988 film Tucker: The Man and His Dream, starring Jeff Bridges. 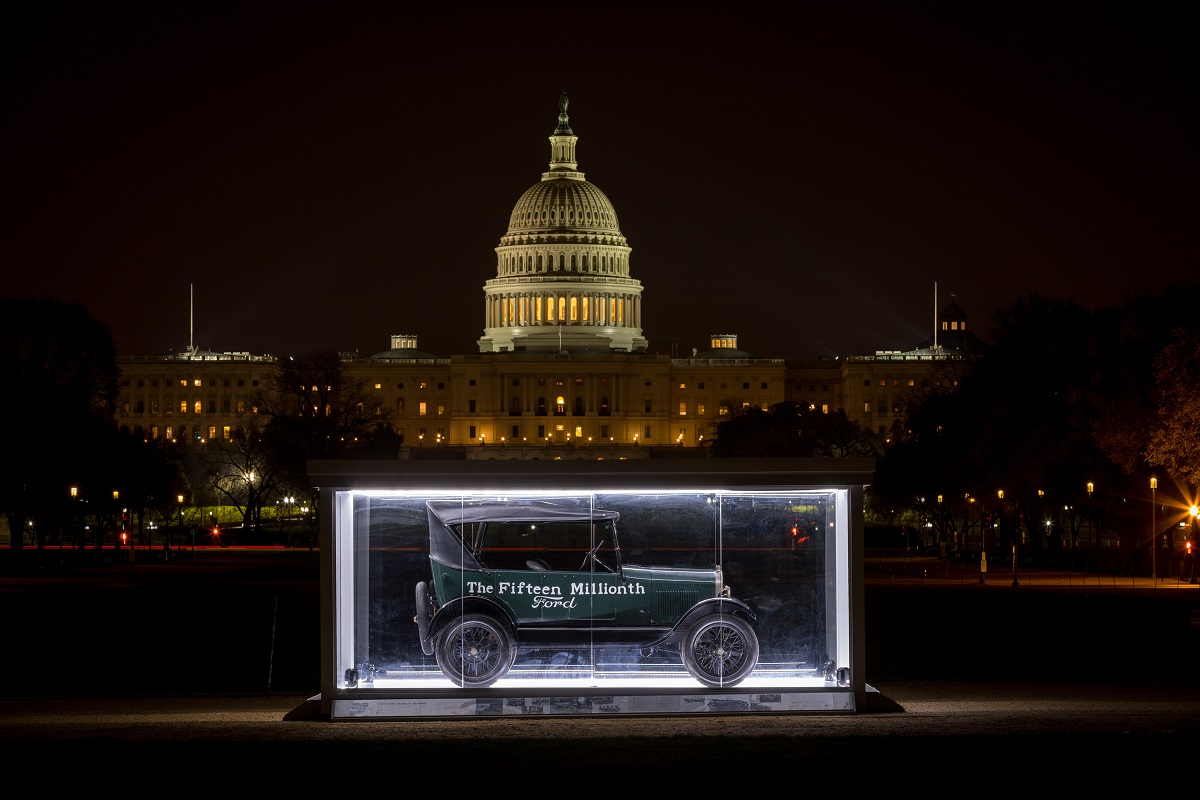 The 15 Millionth Ford Model T traveled from Greenfield Village to the National Mall in April 2018, after it was added to the NHVR. / Photo courtesy Hagerty Drivers Foundation

Some of you may be wondering if anything from The Henry Ford’s collections is listed on the National Historic Vehicle Register. I’m happy to report that, yes, we are represented by (what else) a Ford Model T added to the list in 2018. It’s not just any T, of course, but the 15 Millionth Ford Model T, which was the ceremonial “last” Model T built before Ford ended production in favor of the 1928–1931 Model A. Like most of the vehicles added to the register, our 15 Millionth Model T traveled to Washington, D.C., where it was displayed on the National Mall—to honor the car, but also to draw attention to the NHVR and the importance of preserving America’s automotive heritage. The NHVR research team also produced a 23-minute documentary on the Ford Model T and its enormous influence.

The register continues to grow. Likewise, The Henry Ford will continue to display a rotating selection of register cars in the years ahead. It’s a fun way to celebrate America’s car culture, but it’s also an opportunity to recognize the important and ongoing work of the National Historic Vehicle Register.