Celebrating Women at the Wheel at the 2021 Old Car Festival 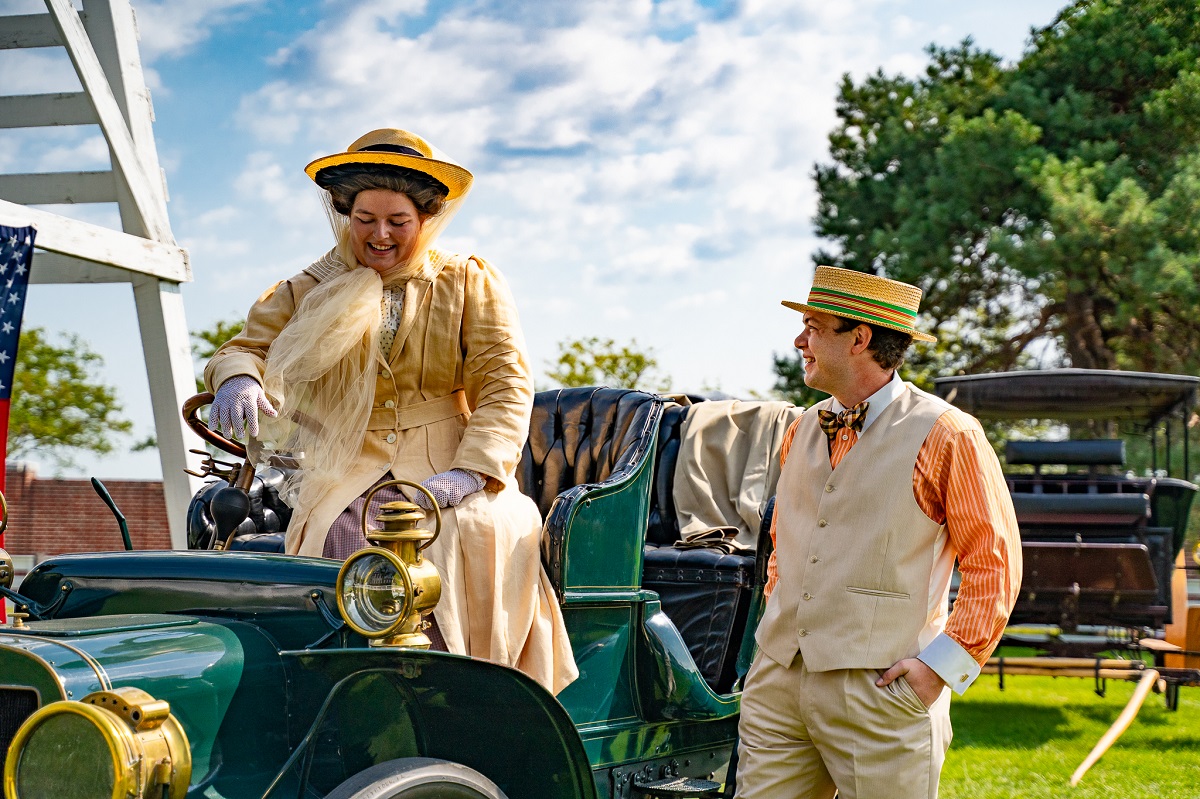 “Women at the Wheel,” like the duster-clad driver at the controls of this 1907 Cadillac Model K, were spotlighted at this year’s Old Car Festival.

After a longer-than-usual pause, Old Car Festival returned to Greenfield Village on September 11–12, 2021. Our celebration of early American motoring included more than 700 registered cars, trucks, motorcycles, and bicycles dating from the 1890s to 1932.

Each year we shine our spotlight on a particular make, model, or theme. For 2021, we celebrated “women at the wheel” in commemoration of the 101st anniversary of the ratification of the 19th Amendment, which gave American women the right to vote. The automobile played a significant part in the fight for women’s suffrage. Cars expanded the range and reach of suffragists, allowing them to spread their message to smaller villages and hamlets located away from railroads. The automobile also provided a prominent mobile platform on which to hang signs and banners, and a traveling stage from which to make speeches and calls to action. 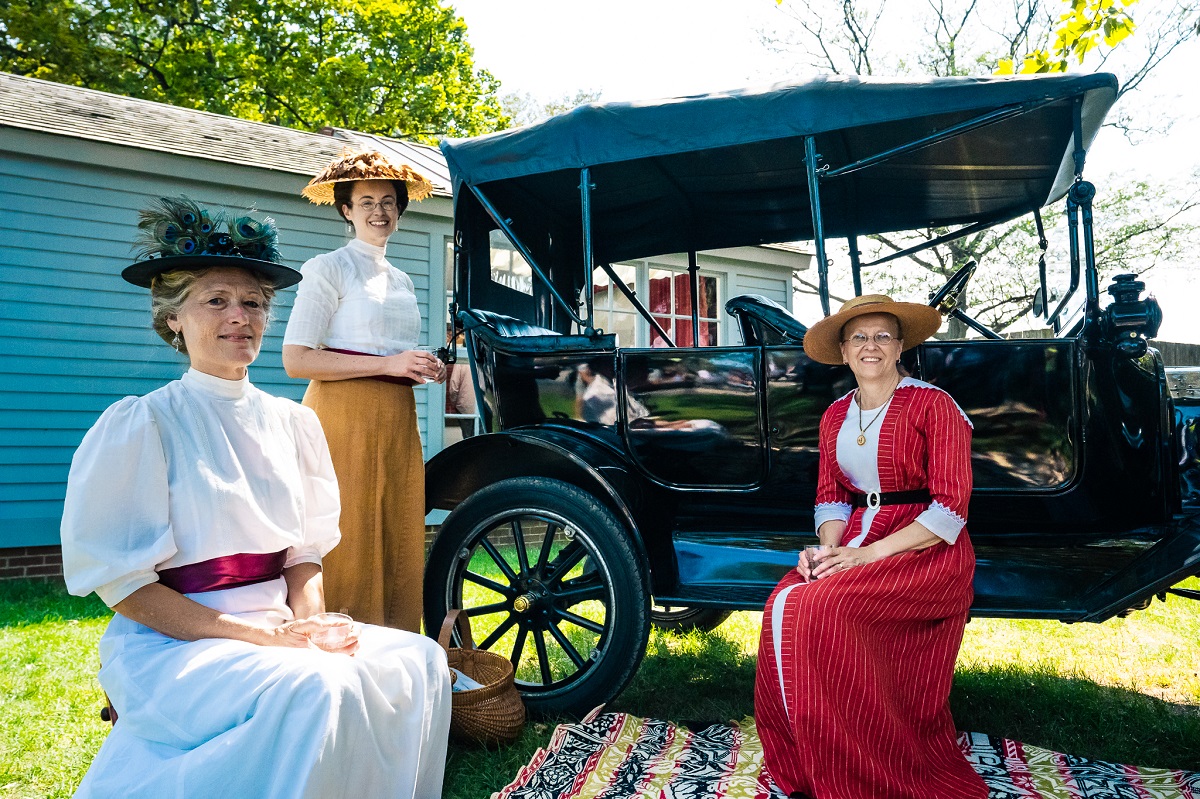 Ford Motor Company advertisements promoted the Model T as a source of freedom for American women.

From the start, automakers appealed specifically to women with targeted advertisements and booklets. Makers of early electric cars made a special point of advertising to well-to-do female buyers. Unlike early gasoline cars, electrics were clean, quiet, and required no crank starting or gear shifting. But many women weren’t bothered in the least by the gasoline car’s disadvantages. Alice Huyler Ramsey drove a gas-powered Maxwell across the United States in 1909, becoming the first woman to make the coast-to-coast road trip. 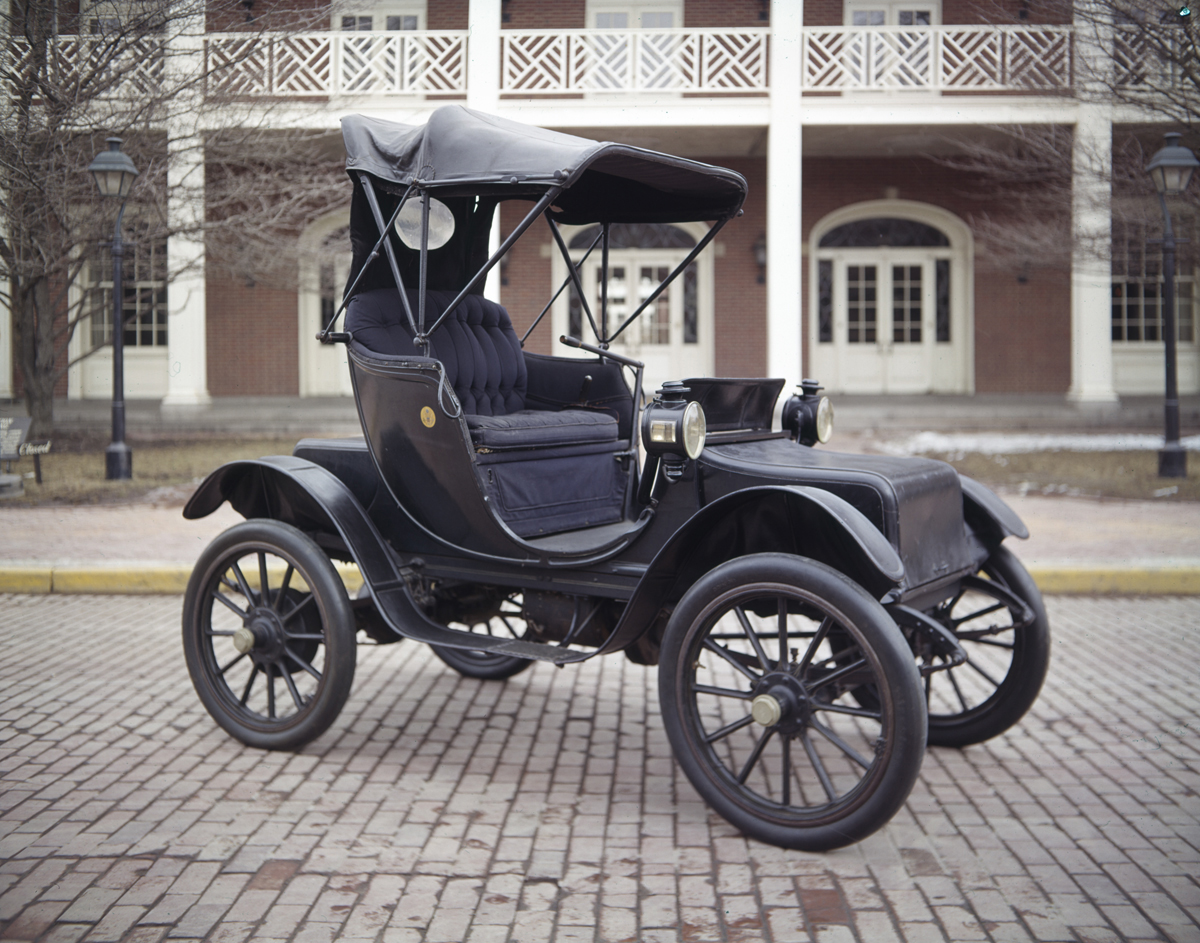 This 1912 Baker Electric was used by five First Ladies of the United States. / THF67884

We celebrated women at the wheel with a very special 1912 Baker Electric Victoria. It was purchased for use at the White House by President William Howard Taft and driven by First Lady Helen Taft. When the Tafts left, the Baker stayed behind and was used by four subsequent First Ladies: Ellen Wilson, Edith Wilson, Florence Harding, and Grace Coolidge. The Baker was retired in 1928 and, shortly thereafter, made its way to The Henry Ford. Guests who made their way to The Lodge at Christie & Main saw the Baker on display alongside our 1922 Detroit Electric, and our replicas of Henry Ford’s 1896 Quadricycle and his 1901 “Sweepstakes” race car. 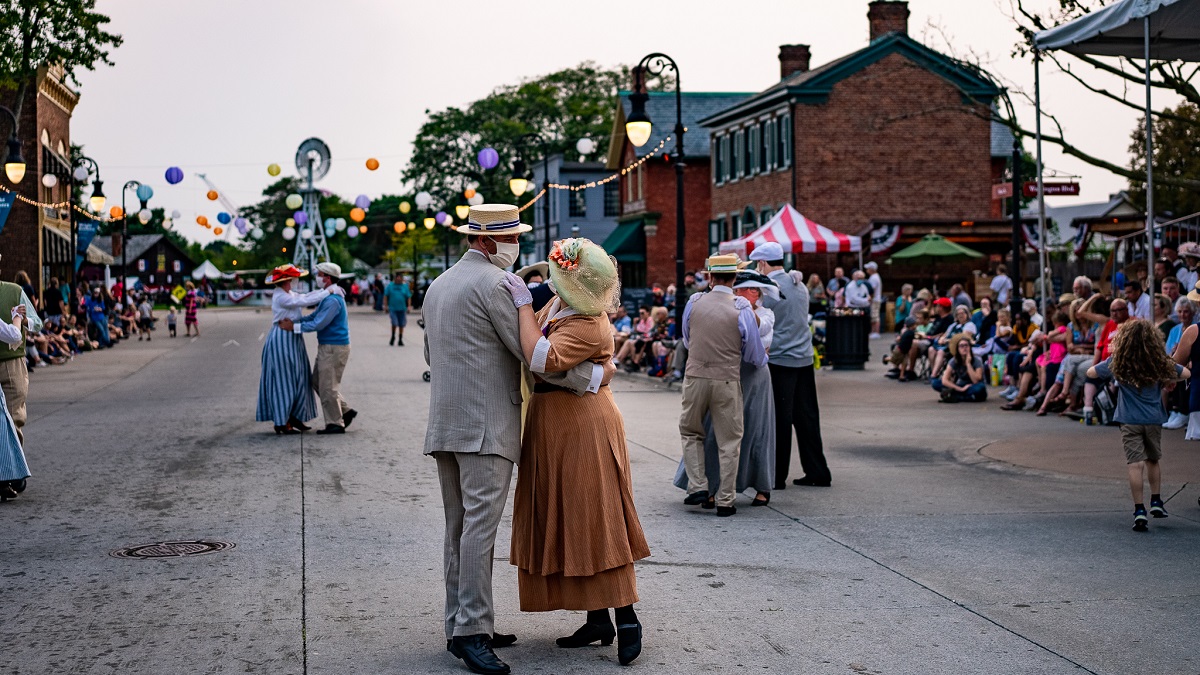 Dancing under the streetlights, to the music of the River Raisin Ragtime Review, capped off Saturday evening.

Show participants and guests enjoyed a variety of activities built around the three decades represented by Old Car Festival’s vehicles. From the 1900s, we had a group of aged Civil War veterans enjoying a Grand Army of the Republic picnic. From the 1910s, we had a Ragtime Street Fair with music and dancing up and down Washington Boulevard. We had a few American doughboys stationed near Cotswold Cottage as well, lest we forget the Great War and its impact on daily life and industrial production. We commemorated the Roaring ’20s with a community garden party near the Bandstand, and—in keeping with our theme—with a presentation by historian Joseph Boggs on the “New Woman,” who challenged traditional gender norms during that exciting decade. 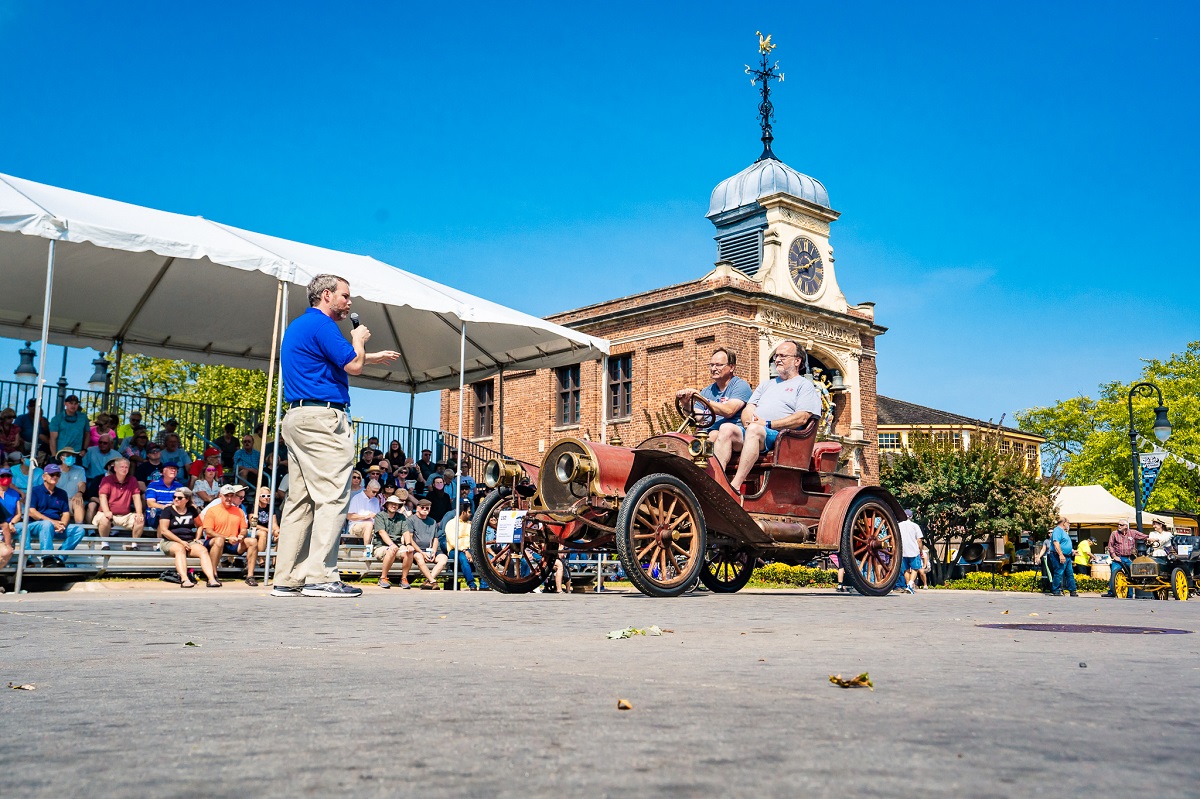 Naturally, those who came for the cars weren’t disappointed. We had everything from Auburns to Willys-Knights parked on every patch of open grass in Greenfield Village. As usual, our team of expert historians was on hand to narrate Pass-in-Review parades that included everything from 19th-century bicycles (brought by the always entertaining Michigan Wheelmen) to commercial trucks, wreckers and depot hacks. (If you weren’t able to see the Pass-in-Review in person, or would like to catch something again, you can watch the early vehicles, commercial vehicles, and bicycles parades on our Facebook page.) We finished off on Saturday evening with the gaslight tour. Anyone who’s experienced it will agree that watching those early autos parade through the village with their flickering gas and early electric lamps is a magical sight. 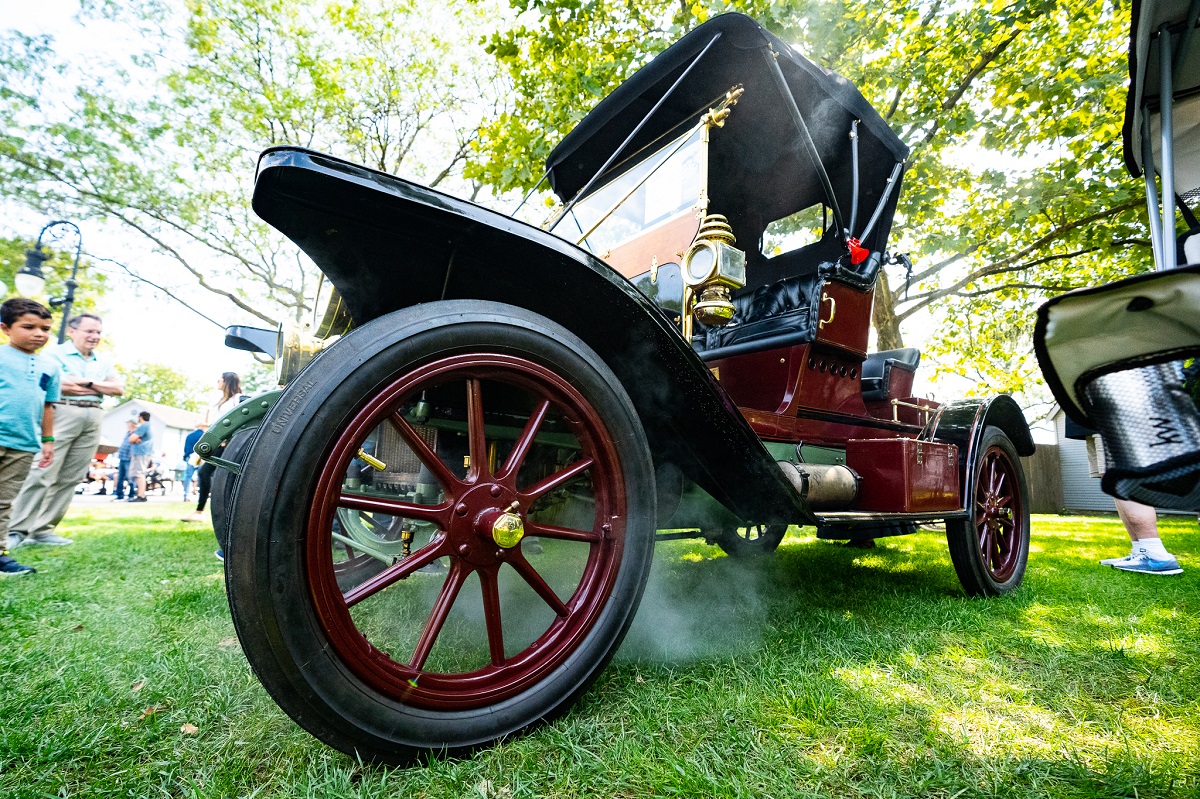 Old Car Festival attracts a variety of motive power, but steam cars like this 1909 White Model O are always a hit.

There’s just something special about Old Car Festival. Several participants have told me that the show is the highlight of the year for them—bigger than birthdays and holidays. I think we all found a little extra joy this time out, resuming a beloved tradition that’s been a part of Greenfield Village for 70 years. We’ll look forward to seeing all our friends again in 2022.