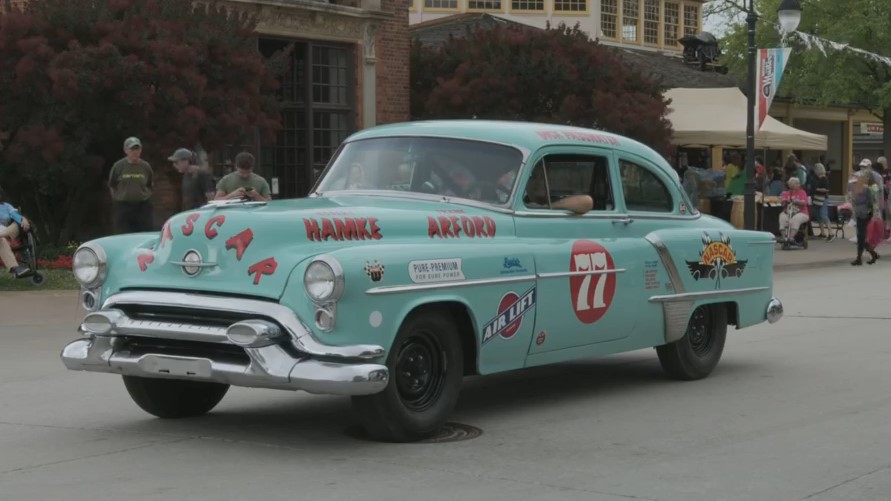 We spotlighted racing at Motor Muster for 2021. This 1953 Oldsmobile 88 stock car, brought to us by the R.E. Olds Transportation Museum, fit the theme perfectly. / Image from The Henry Ford’s livestream

Gearheads and automobile aficionados had reason to celebrate as Motor Muster returned to Greenfield Village on June 19 and 20. Like so much else, last year’s show was canceled in the wake of COVID-19. But with restrictions eased and a brighter situation all around, we returned in 2021 for another memorable show. We also welcomed a new sponsor. For the first time, this year’s Motor Muster was powered by Hagerty.

It’s no surprise, given the recent opening of our exhibit Driven to Win: Racing in America Presented by General Motors, that our Motor Muster spotlight was on racing. Yes, we had competition cars in the mix, but we opened the celebration to include production cars inspired by racing events, locations, and personalities. Whether it’s a model like Bonneville or a make like Chevrolet, racing names have appeared on automobiles from the start. 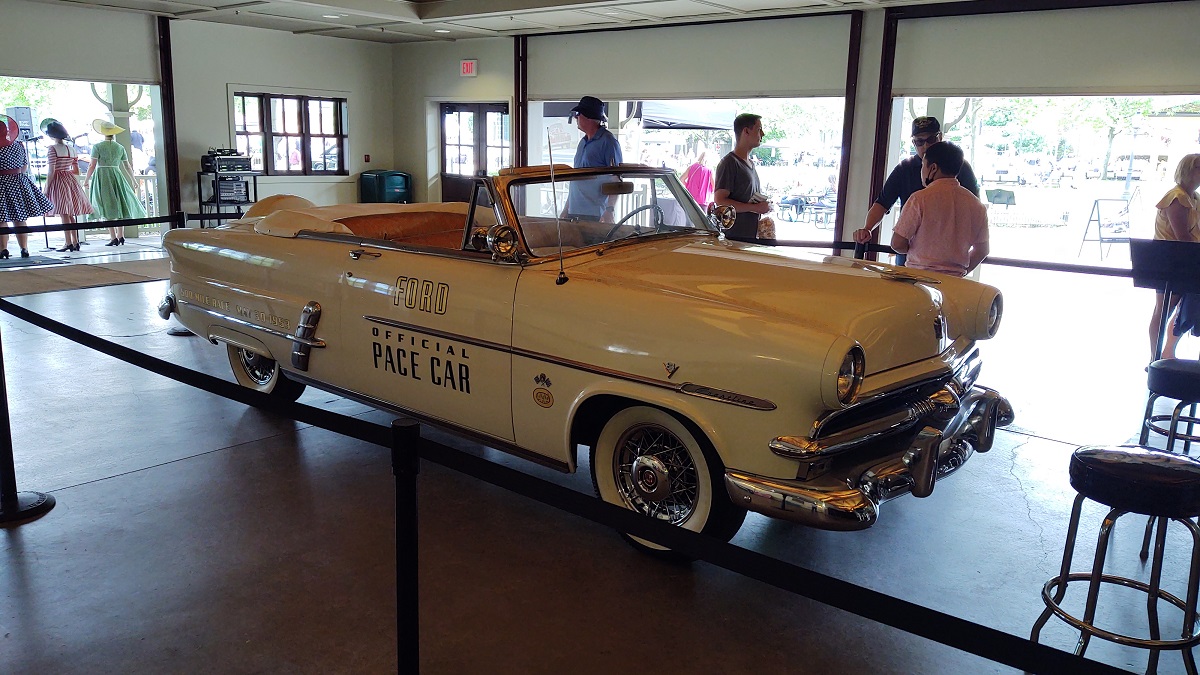 As always, we brought out a special vehicle from The Henry Ford’s collection. Many of our prominent competition cars are in Driven to Win, but we found a perfect match for the theme in our 1953 Ford Sunliner. The convertible served as pace car at the 1953 Indianapolis 500, driven by William Clay Ford in honor of Ford Motor Company’s 50th anniversary. In addition to its decorative lettering (with flecks of real gold in the paint), the pace car featured a gold-toned interior, distinctive wire wheels, and a specially tuned V-8 engine rated at 125 horsepower. 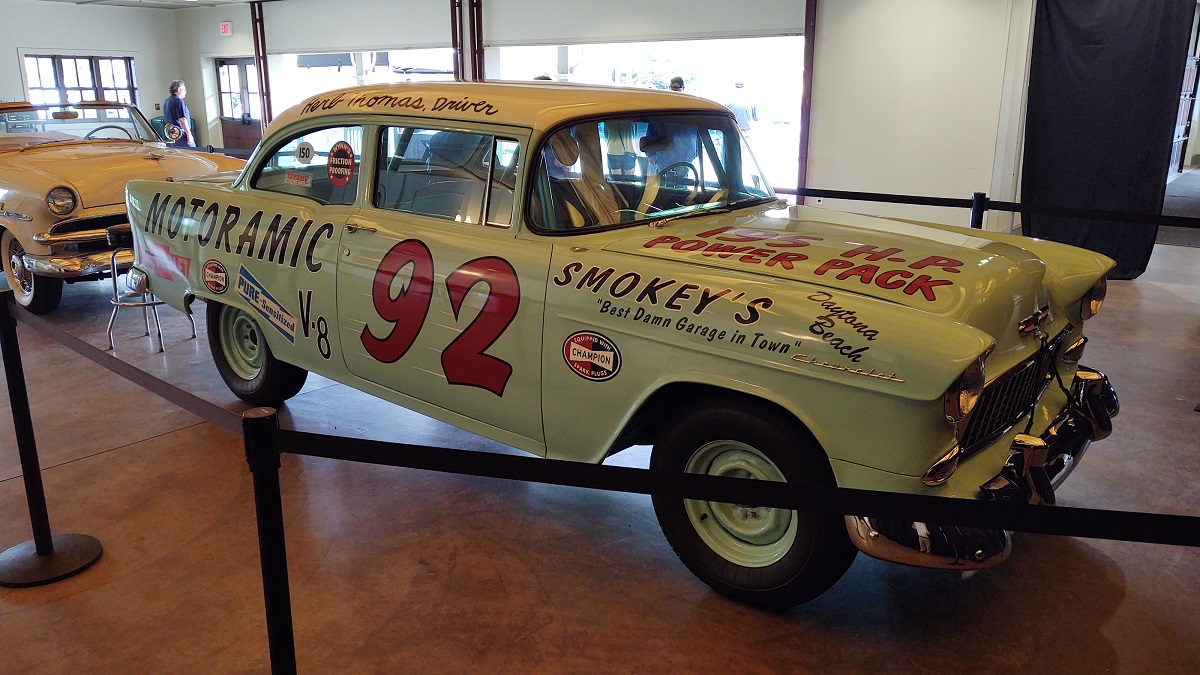 From the GM Heritage Center, a 1955 Chevrolet from the days when stock cars were still largely stock. / Image by Matt Anderson

Our friends at General Motors got into the spirit of things by lending an appropriate car from the GM Heritage Center collection. Their 1955 Chevrolet 150 sedan is a replica of the car in which NASCAR driver Herb Thomas won the 1955 Southern 500 at Darlington Raceway. Thomas’s car benefited from Chevy’s new-for-’55 V-8 engine which, with the optional PowerPak dual exhausts, was rated at 180 horsepower. The Chevy small-block design went on to win more NASCAR races than any other engine.

Historical vignettes were in place throughout Greenfield Village—everything from a Civilian Conservation Corps setup from the 1930s to a patriotic bicentennial picnic right out of the mid-1970s. Even the Herschell-Spillman Carousel got into the spirit of the ’70s, playing band organ arrangements of the hits of ABBA. (I wonder if that 1961 Volvo at the show ever drove past the carousel. What a smorgasbord of Swedish splendor that would’ve been!) 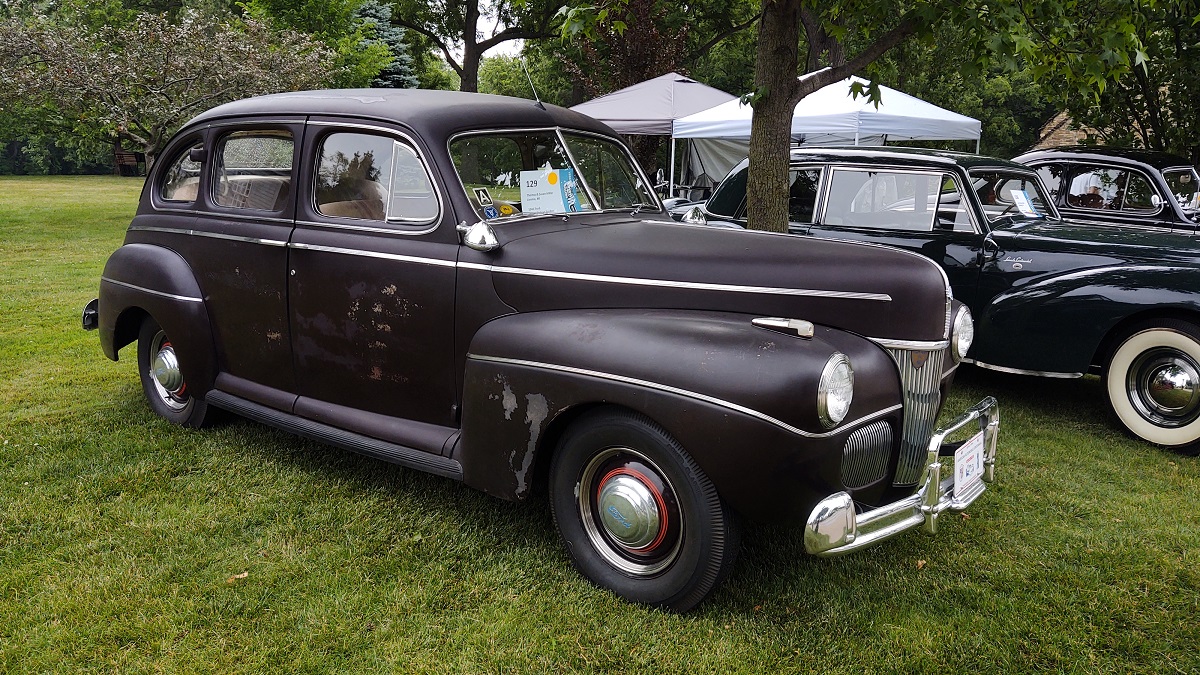 As always, we capped the weekend with our awards ceremony. Our popular choice voting allows visitors to choose their favorite vehicles from each Motor Muster decade. Top prize winners this year included a 1936 Hupmobile, a 1948 MG TC, a 1958 Chevrolet Corvette, a 1969 Plymouth Barracuda, and a 1976 Ford Econoline van. The blue ribbon for motorcycles went to a 1958 Vespa Allstate, and the one for bicycles to a 1952 JC Higgins bike. For commercial and military vehicles, our top vote-getters were a 1937 Ford 77 pickup and a 1942 White M2A1 half-track, respectively. We also presented trophies to two unrestored vehicles honored with our Curator’s Choice award. For 2021, those prizes went to a 1936 Buick Victoria Coupe and a 1967 Chevrolet C/10 pickup.

It was a longer-than-usual time in coming, but Motor Muster 2021 was worth the wait. Everyone was in good spirits and enjoying the cars, the camaraderie, and the chance to enjoy a bit of normalcy after a trying year. Let’s all do it again soon.

If you weren’t able to join us at Motor Muster this year, though, you can watch parts of the program right now. Our popular pass-in-review program, in which automotive historians provide commentary on participating vehicles, returned this year with a twist. We livestreamed portions of the program so that people who couldn’t attend Motor Muster in person could still enjoy some of the show. Enjoy those streams below, or use the links in the captions to jump straight to Facebook.