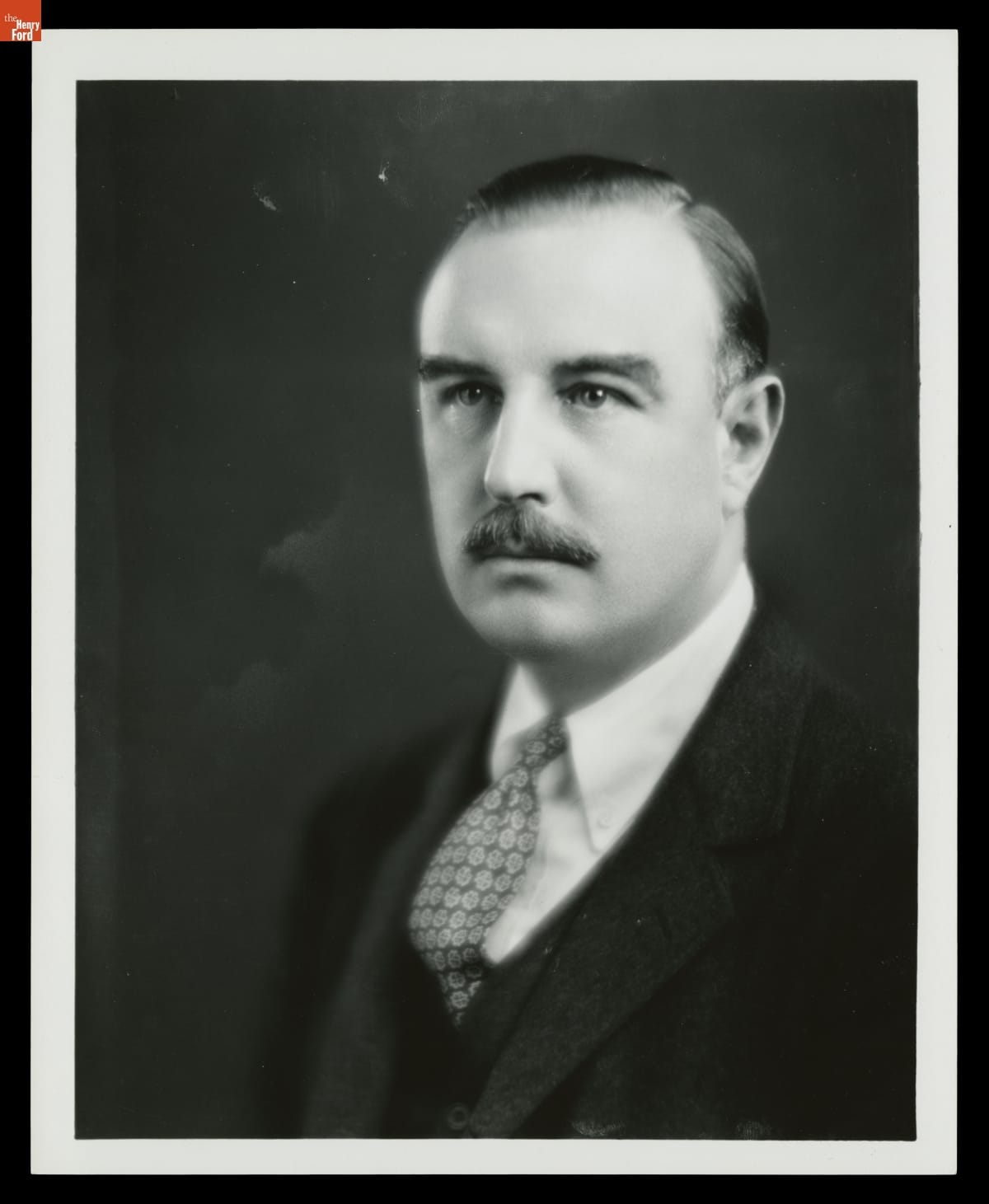 As part of our 90th anniversary celebration the intriguing story of Henry Ford Museum of American Innovation’s design bears repeating. It was last discussed in depth in the 50th anniversary publication “A Home for our Heritage” (1979).

Our tale begins on the luxury ocean liner R.M.S. Majestic, then the largest in the world, on its way to Europe in the spring of 1928. On board were Henry and Clara Ford, their son Edsel and Edsel’s wife Eleanor. Serendipitously, Detroit-based architect Robert O. Derrick and his wife, Clara Hodges Derrick, were also on board. The Derricks were approximately the same age as the Edsel Fords and the two couples were well-acquainted. According to Derrick’s reminiscence, housed in the Benson Ford Research Center, he was invited by Henry Ford to a meeting in the senior Fords’ cabin, which was undoubtedly arranged by Edsel Ford. During the meeting Derrick recalled that Mr. Ford asked how he would hypothetically design his museum of Americana. Derrick responded, “well, I’ll tell you, Mr. Ford, the first thing I could think of would be if you could get permission for me to make a copy of Independence Hall in Philadelphia. It is a wonderful building and beautiful architecture and it certainly would be appropriate for a collection of Americana.” Ford enthusiastically approved the concept and once back in Detroit, secured measured drawings of Independence Hall and its adjacent 18th century buildings which comprise the façade of the proposed museum. Both Derrick and Ford agreed to flip the façade of Independence Hall to make the clock tower, located at the back side of Independence Hall in Philadelphia, a focal point of the front of the new museum in Dearborn.

Robert Ovens Derrick (1890-1961) was an unlikely candidate for the commission. He was a young architect, trained at Yale and Columbia Universities, with only three public buildings to his credit, all in the Detroit area. He was interested in 18th century Georgian architecture and the related Colonial Revival styles, which were at the peak of their popularity in the 1920s.

In his reminiscence, he states that he was overwhelmed with the commission, but was also confident in his abilities: “I did visit a great many industrial and historical museums and went to Chicago. I remember that I studied the one abroad in Germany, [The Deutsches Museum in Munich] which is supposed to be one of the best. I studied them all very carefully and I did make some very beautiful plans, I thought. Of course, I was going according to museum customs. We had a full basement and a balcony going around so the thing wouldn’t spread out so far. We had a lot of exhibits go in the balcony. I had learned that, in museum practice, you should have a lot more storage space, maintenance space and repair shops than you should have for exhibition. That is why I had the big basement. I didn’t even get enough there because I had the floor over it plus the balconies all around.” 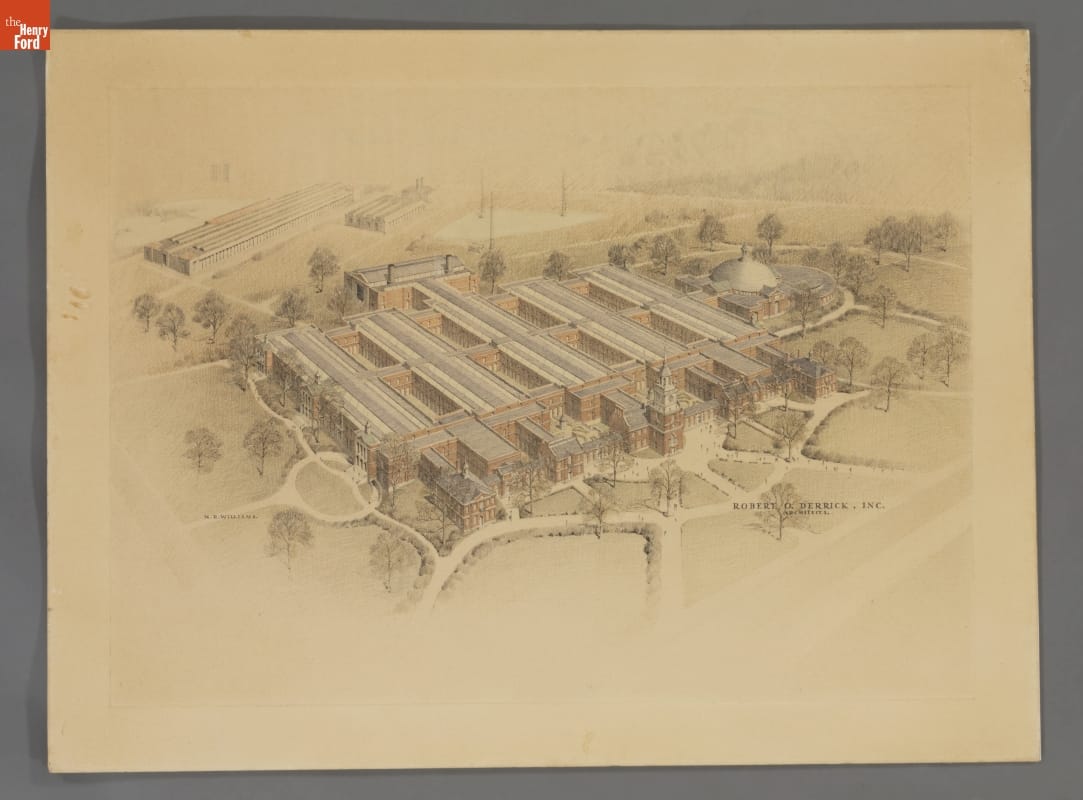 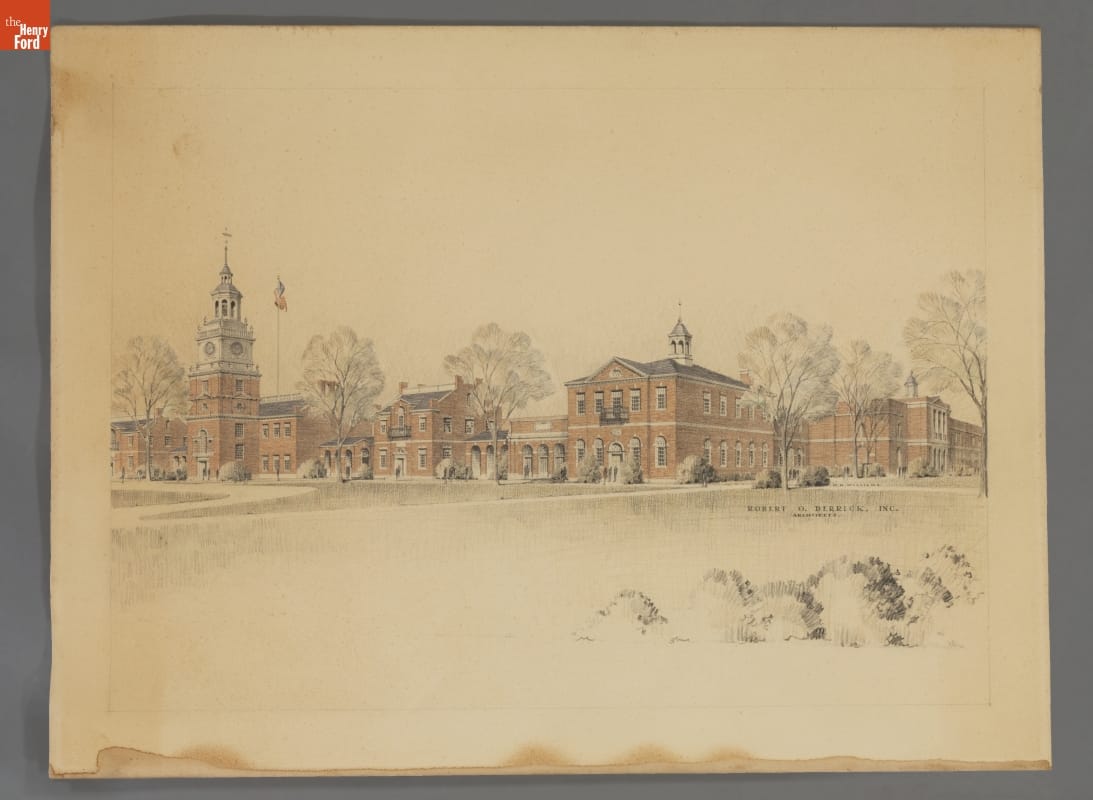 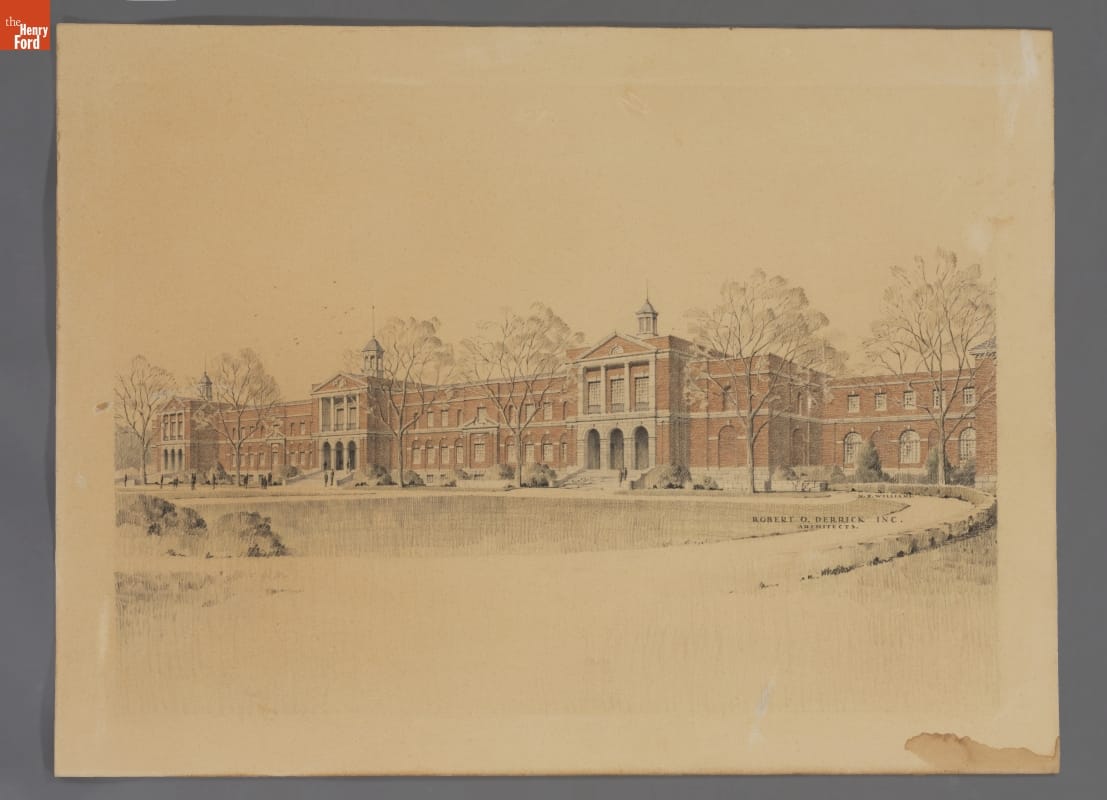 In the aerial view [THF0442], the two-story structure is a warren of courtyards and two-story buildings, with exhibition space on the first floor and presumably balconies above, although no interior views of this version survive. A domed area on the upper right was to be a roundhouse, intended for the display of trains. THF0443 shows a view of the front of the museum from the southeast corner. This view is close to the form of the completed museum, at least from the front. An examination of the side of the building [THF0444] shows a two-storied wing.

Derrick recalled Mr. Ford’s initial response to his proposals, “What’s this up here? and I said, that is a balcony for exhibits. He said, I wouldn’t have that; there would be people up there, I could come in and they wouldn’t be working. I wouldn’t have it. I have to see everybody. Then he said: What’s this? I said, that is the basement down there, which is necessary to maintain these exhibits and to keep things which you want to rotate, etc. He said, I wouldn’t have that; I couldn’t see the men down there when I came in. You have to do the whole thing over again and put it all on one floor with no balconies and no basements. I said, okay, and I went back and we started all over again. What you see [today] is what we did the second time.” 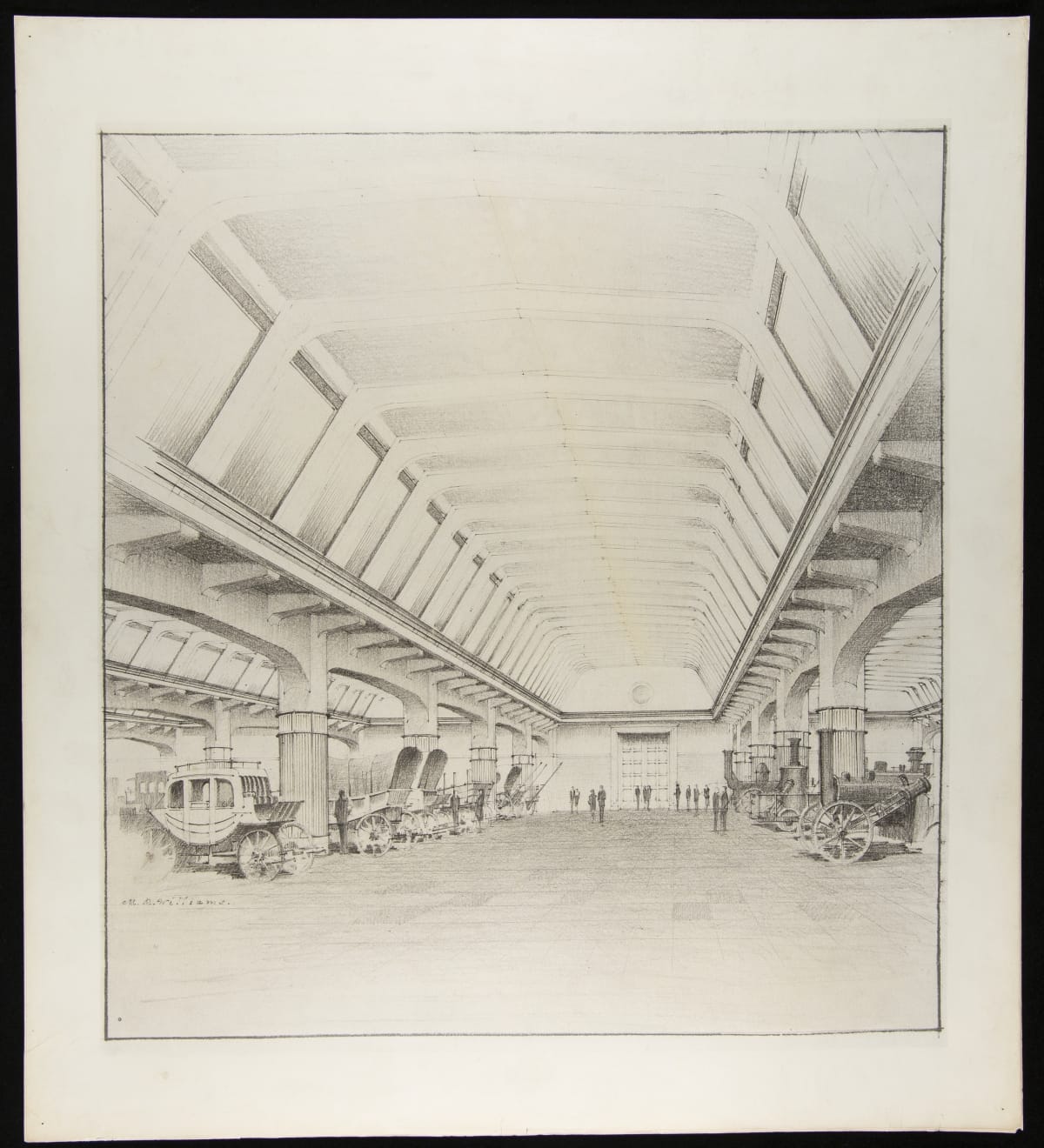 A second group of presentation drawings show the museum as it was built in 1929. THF294368 is the interior of the large “Machine Hall,” the all-on-one-floor exhibit space that Mr. Ford requested.  The unique roof and skylight system echo that of Albert Kahn’s Ford Engineering Laboratory, completed in 1923 and located just behind the museum. Radiant heating is located in the support columns through what appear to be large flanges or fins. The image also shows how Mr. Ford wanted his collection displayed – in long rows, by types of objects – as seen here with the wagons on the left and steam engines on the right. 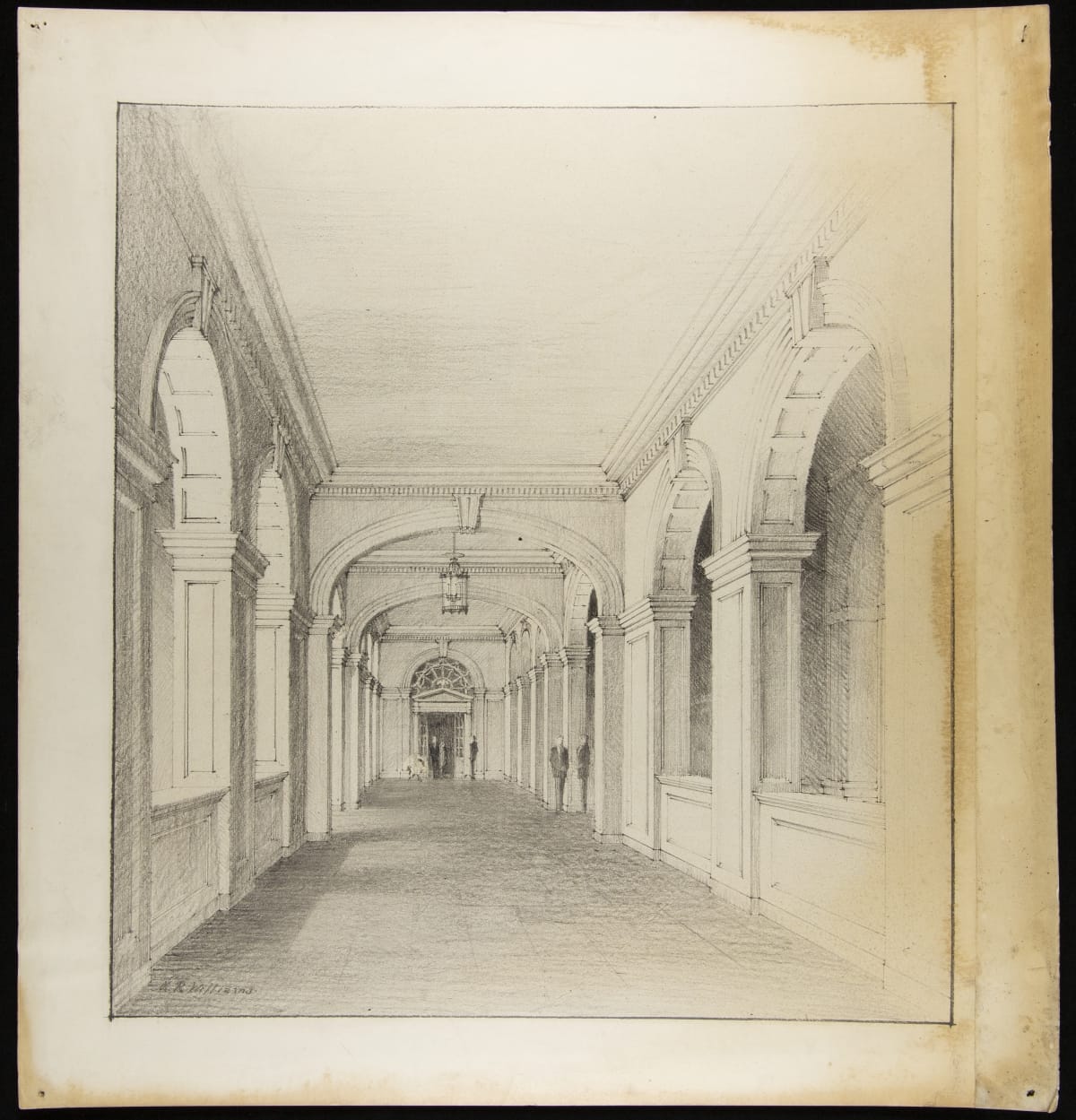 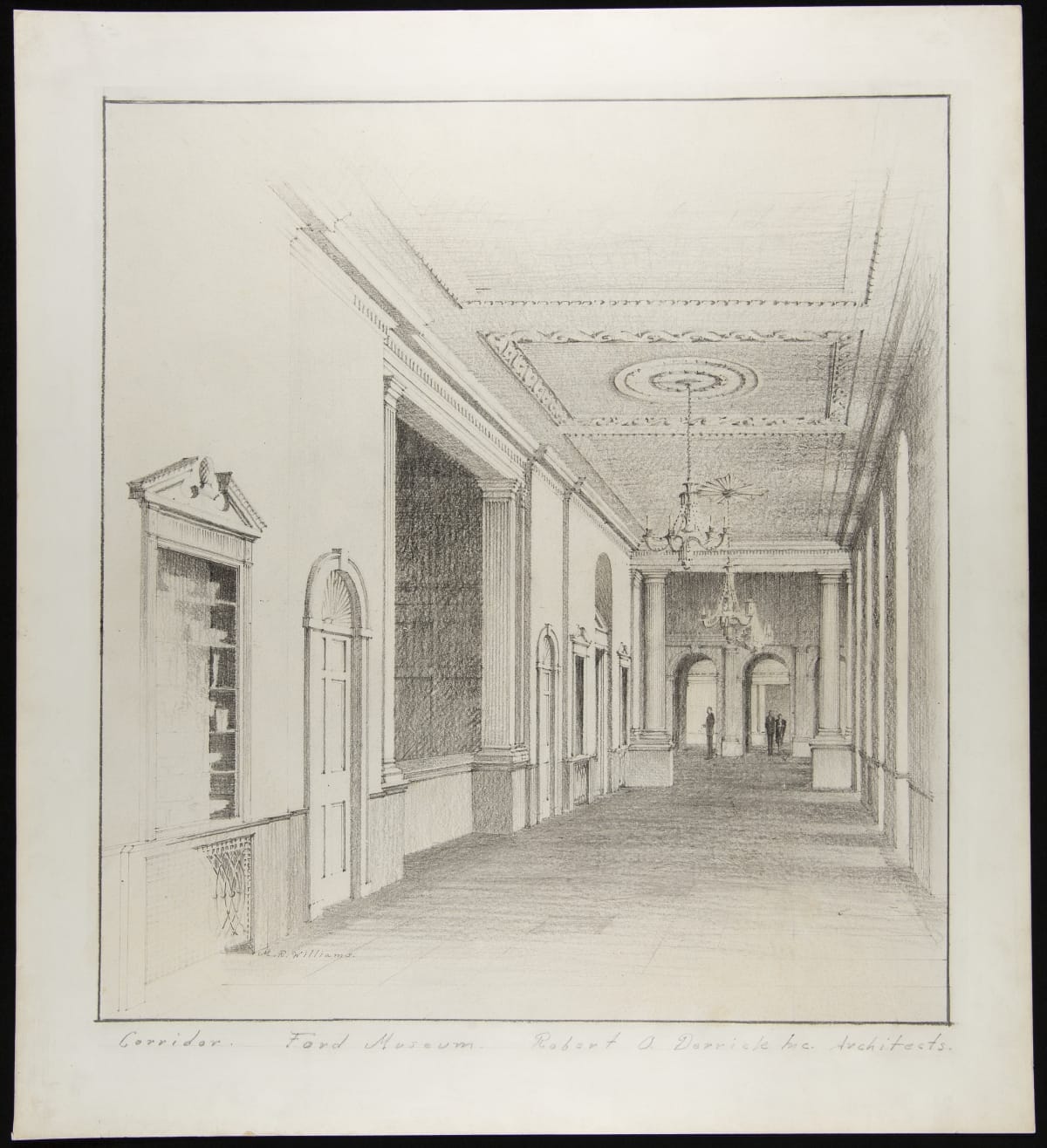 These corridors, known today as the Prechter Promenade, run the width of the museum. Floored with marble and decorated with elaborate plasterwork, the promenade is the first part of the interior seen by guests. Mr. Ford wanted all visitors to enter through his reproduction of the Independence Hall Clock Tower. The location of Light’s Golden Jubilee, a dinner and celebration of the 50th anniversary of Thomas Edison’s development of incandescent electric lamp, held on October 21, 1929 is visible at the back of THF294388. This event also served as the official dedication of the Edison Institute of Technology, honoring Ford’s friend and mentor, Thomas Edison. Today the entire institution is known as The Henry Ford, which includes the Henry Ford Museum of American Innovation and Greenfield Village. 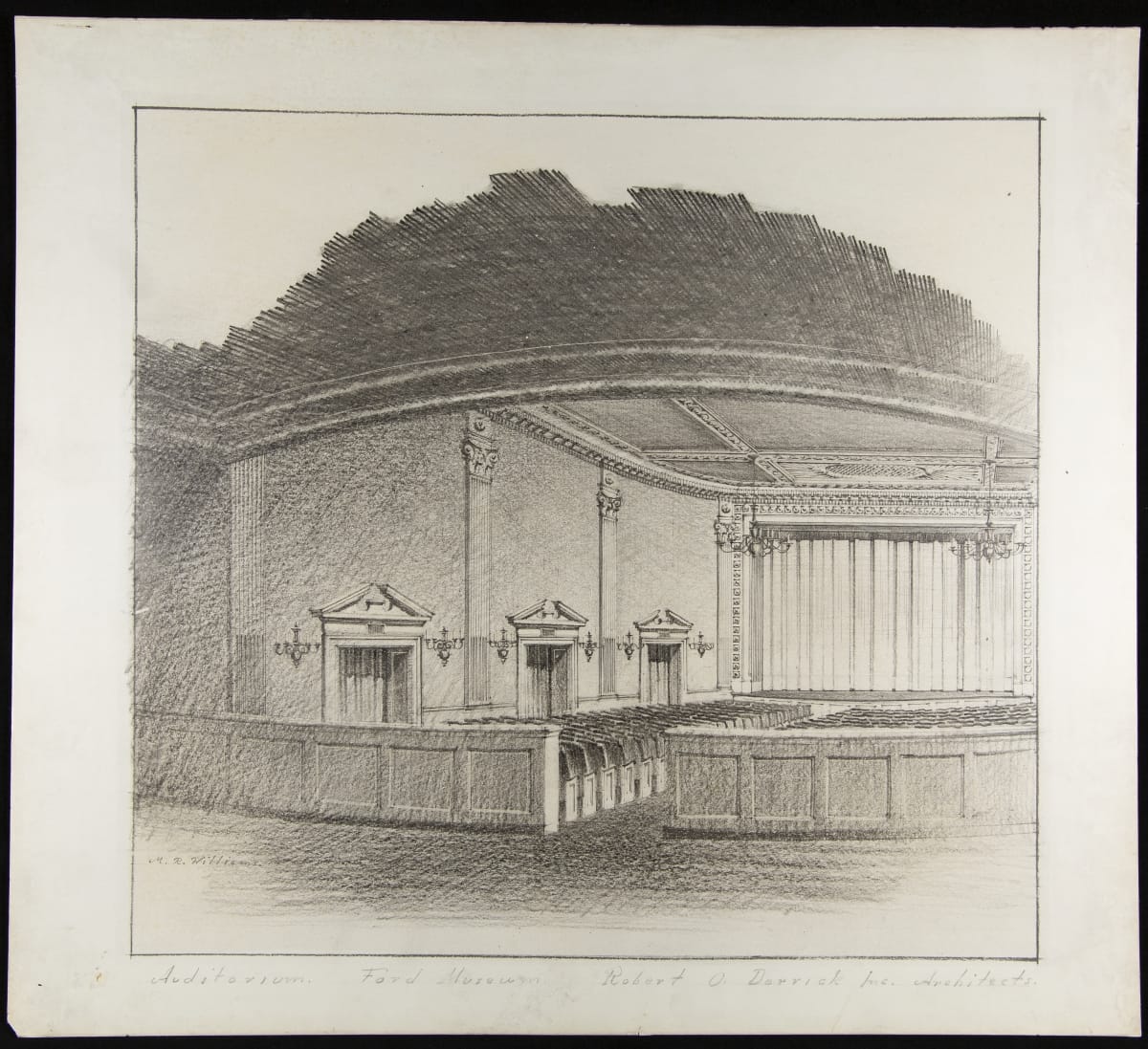 Just off the Prechter Promenade is the auditorium, now known as the Anderson Theater.  Intended to present historical plays and events, this theater accommodates approximately 600 guests. During Mr. Ford’s time it was also used by the Greenfield Village schools for recitals, plays, and graduations. Today, it is used by the Henry Ford Academy, a Wayne County charter high school, and the museum for major public programs. 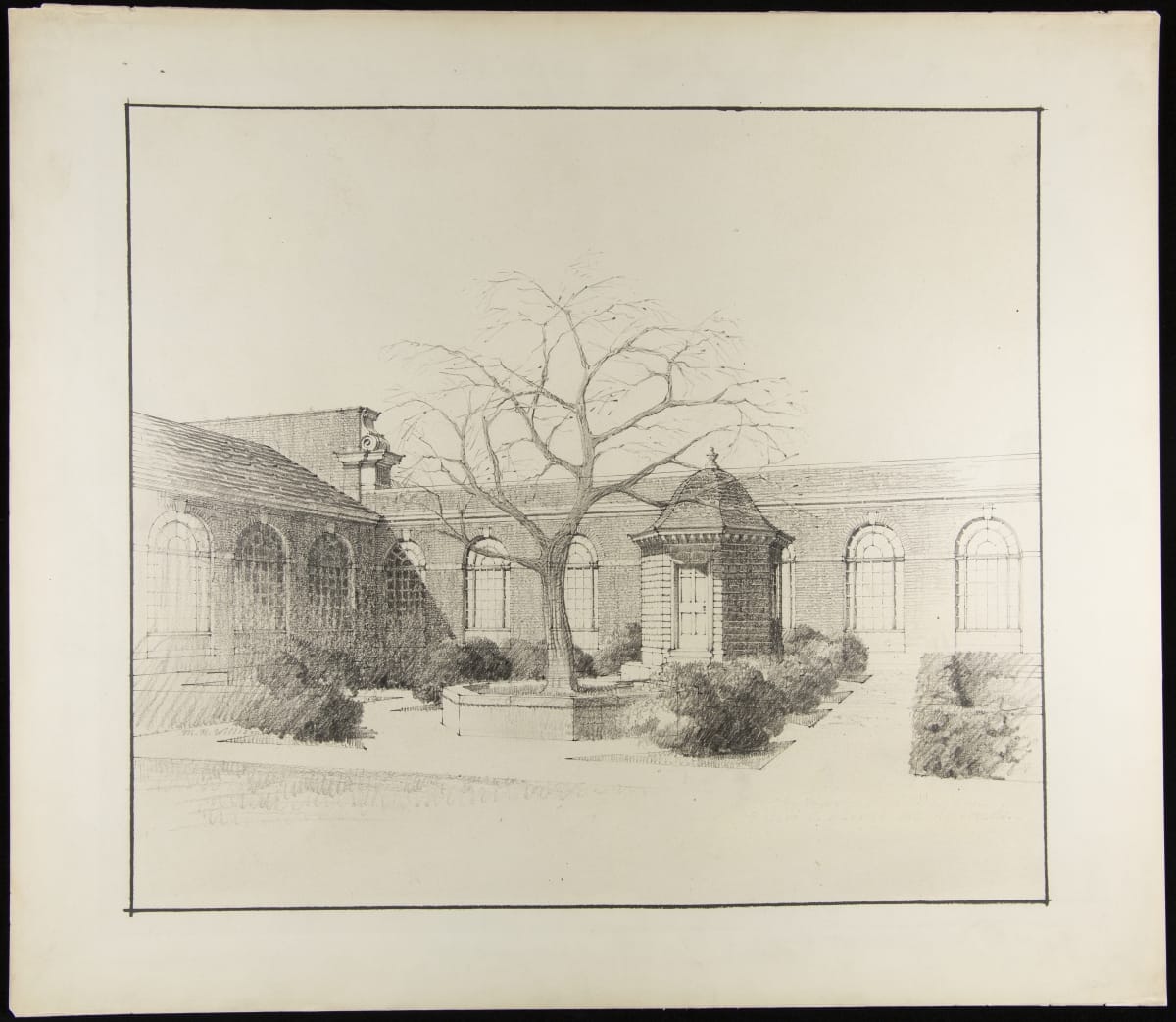 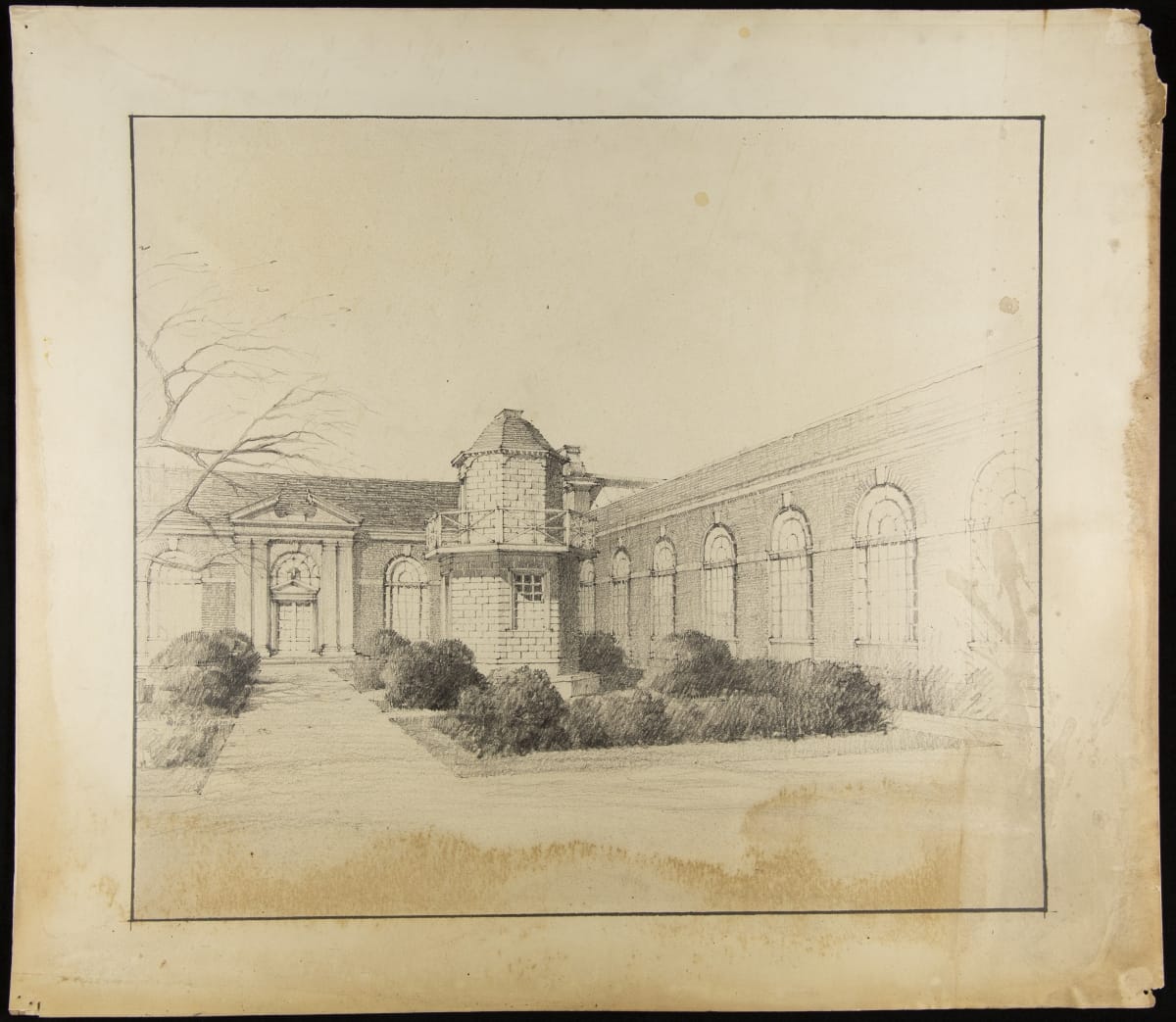 Derrick created two often-overlooked exterior courtyards between the Prechter Promenade and the museum exhibit hall. Each contains unique garden structures, decorative trees and plantings, and both are accessible to the public from neighboring galleries. 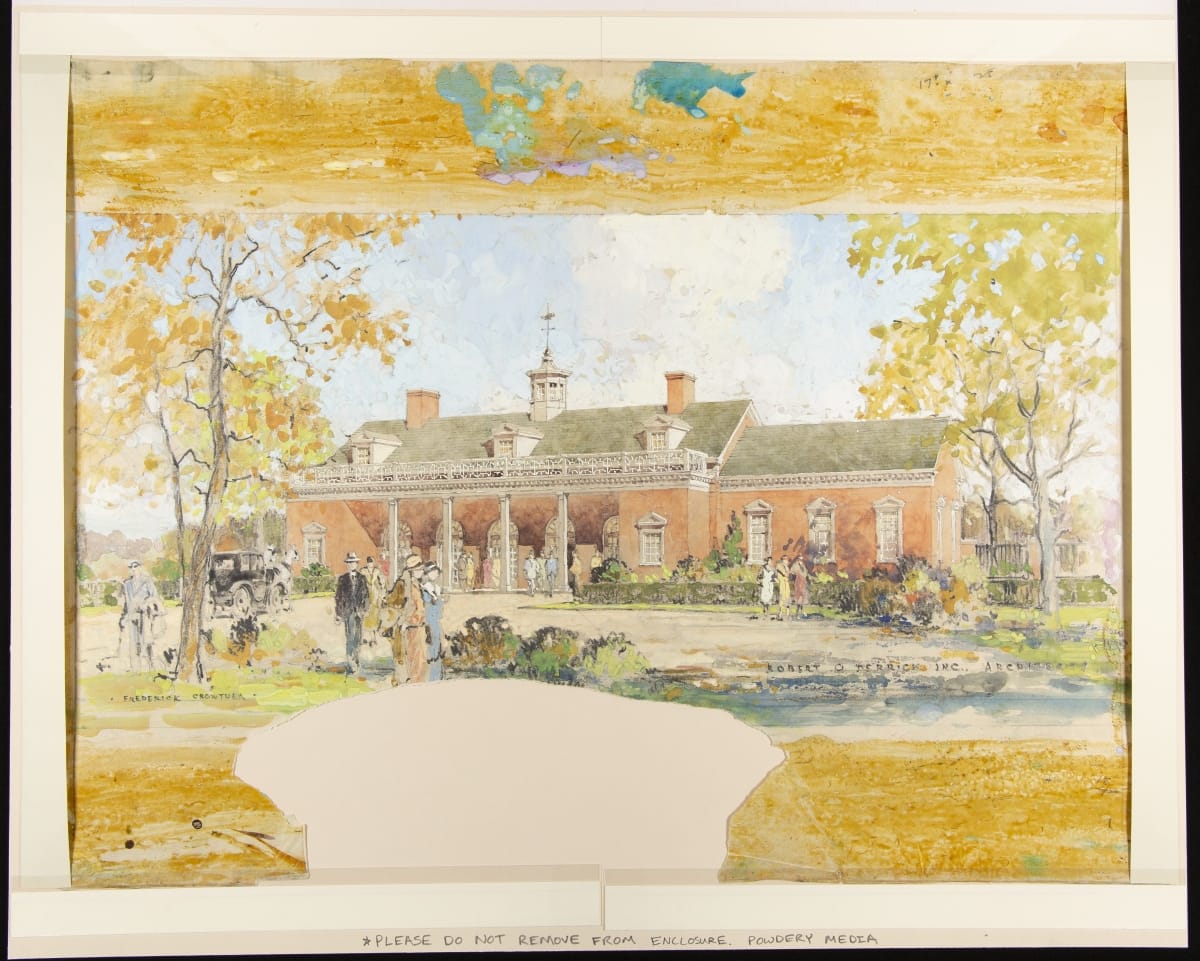 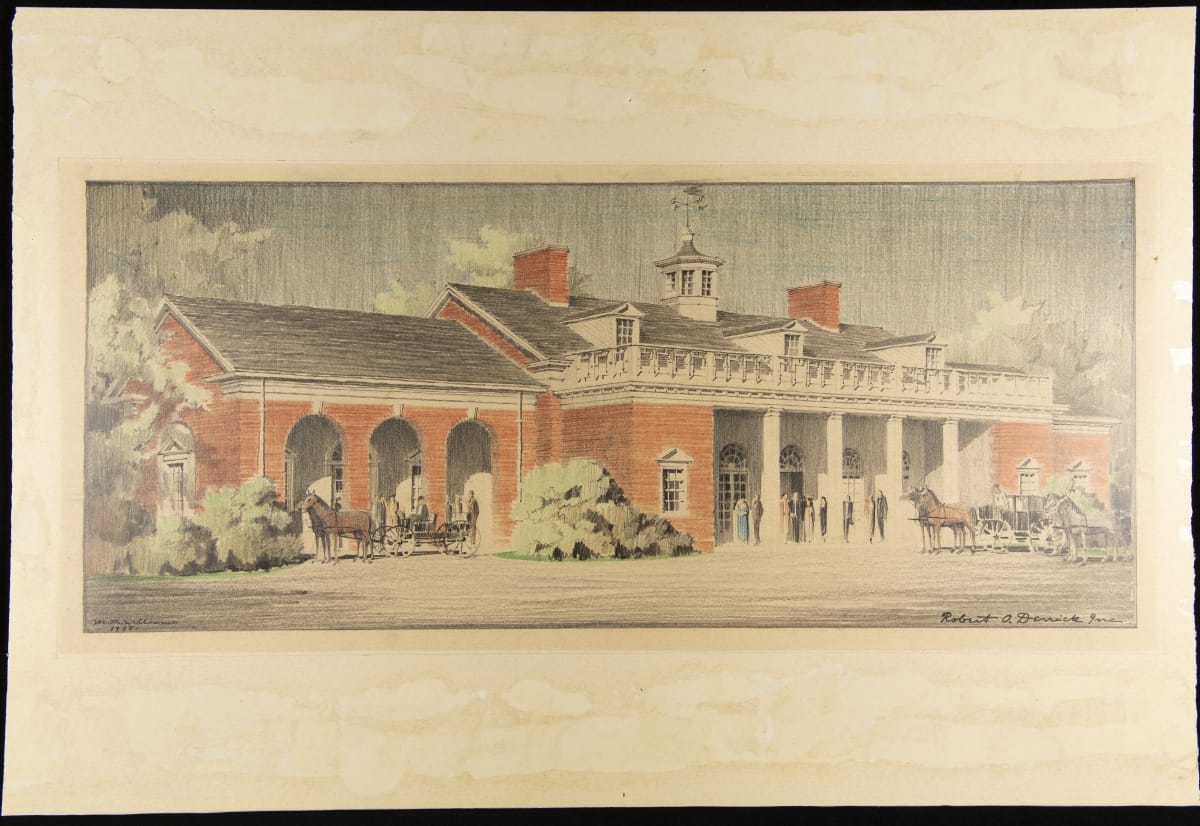 The Greenfield Village Gatehouse was completed in 1932 by Robert Derrick, in a Colonial Revival style to complement the Museum. From its opening in 1932 until the Greenfield Village renovation of 2003, the gatehouse served as the public entrance to the Village. Today, visitors enter the Village through the Josephine Ford Plaza behind the Gatehouse.  Although the exterior was left unchanged in the renovation, the Gatehouse now accommodates guests with an updated facility, including new, accessible restrooms and a concierge lounge with a will-call desk for tickets. 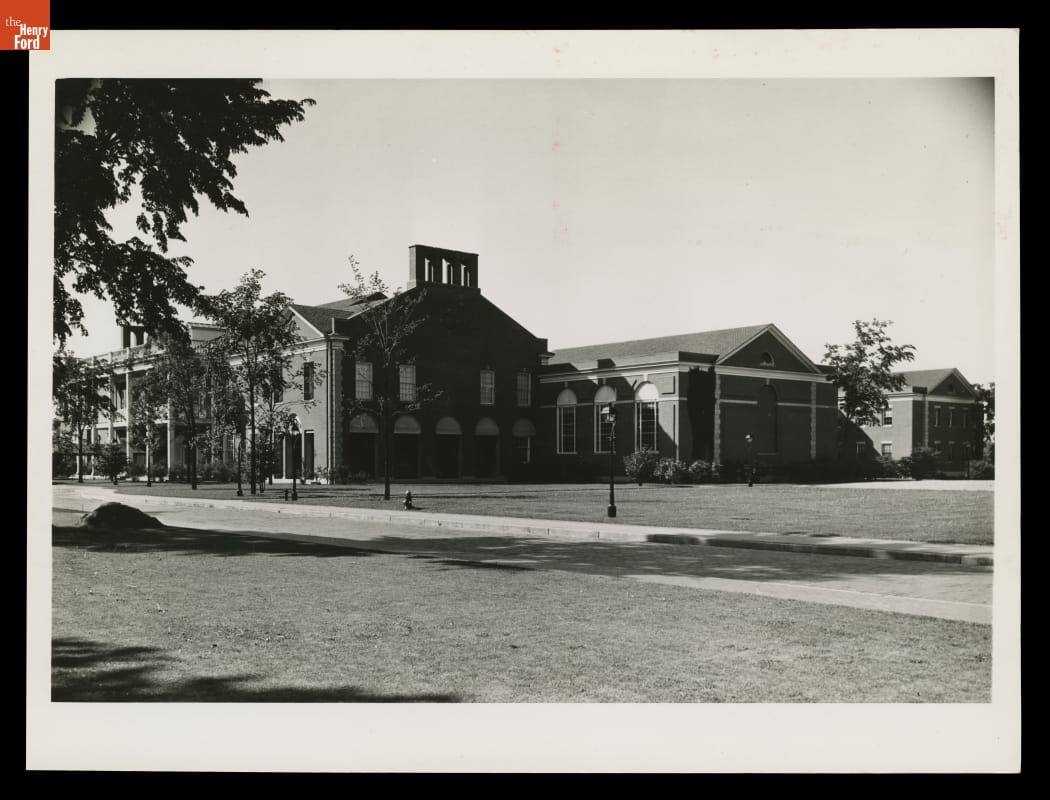 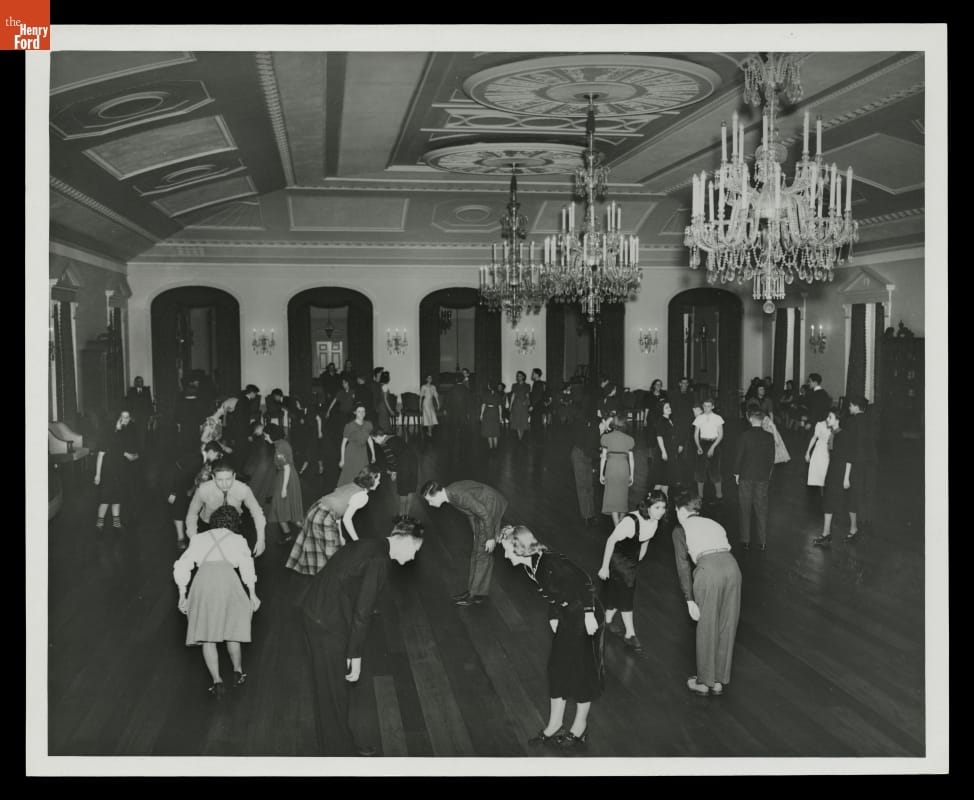 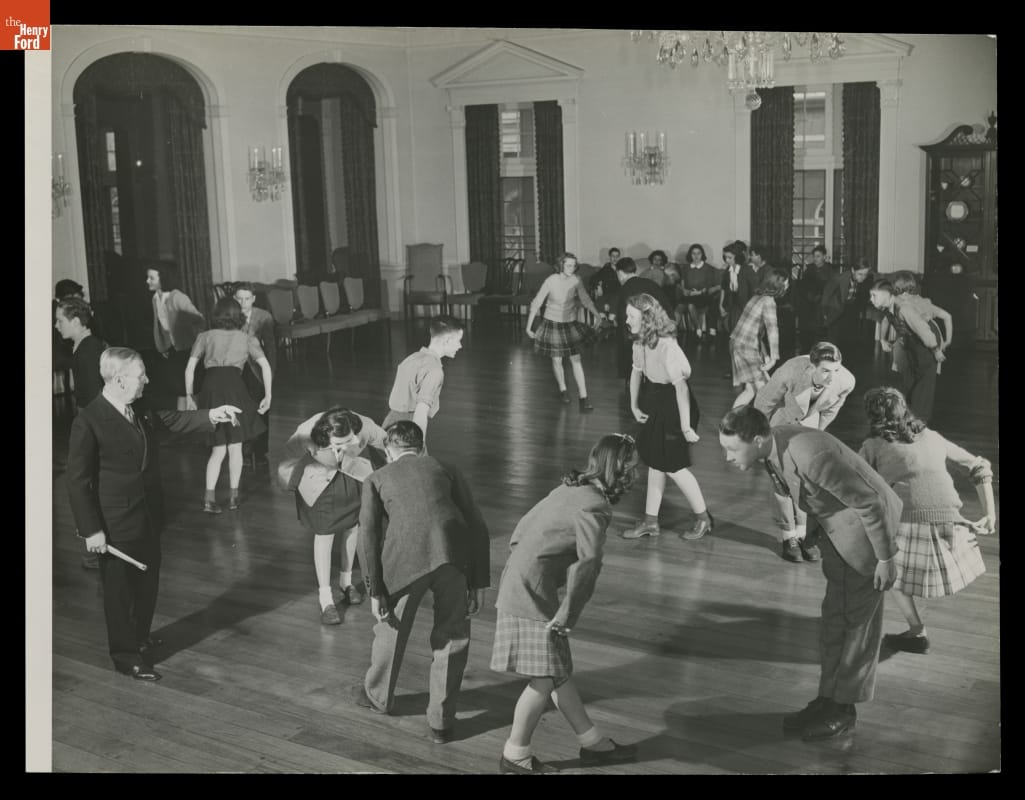 In 1936 Robert Derrick designed the Education Building for Mr. Ford.  Now known as Lovett Hall, the building served many purposes, mainly for the Greenfield Village School system. It housed a swimming pool, gymnasium, classrooms, and an elaborately-decorated ballroom, where young ladies and gentlemen were taught proper “deportment.” Like all the buildings at The Henry Ford, it was executed in the Colonial Revival style. Today the well-preserved ballroom serves as a venue for weddings and other special occasions.

Obviously, Mr. Derrick was a favorite architect of Mr. Ford, along with the renowned Albert Kahn, who designed the Ford Rouge Factory. The museum was undoubtedly Derrick’s greatest achievement, although he went on to design Detroit’s Theodore J. Levin Federal Courthouse in 1934. Unlike the Henry Ford commissions, the courthouse was designed in the popular Art Deco, or Art Moderne style. Derrick is also noted for many revival style homes in suburban Grosse Pointe, which he continued to design until his retirement in 1956. He is remembered as one of the most competent, and one of the many creative architects to practice in 20th century Detroit.