Behind Every Object Is a Story 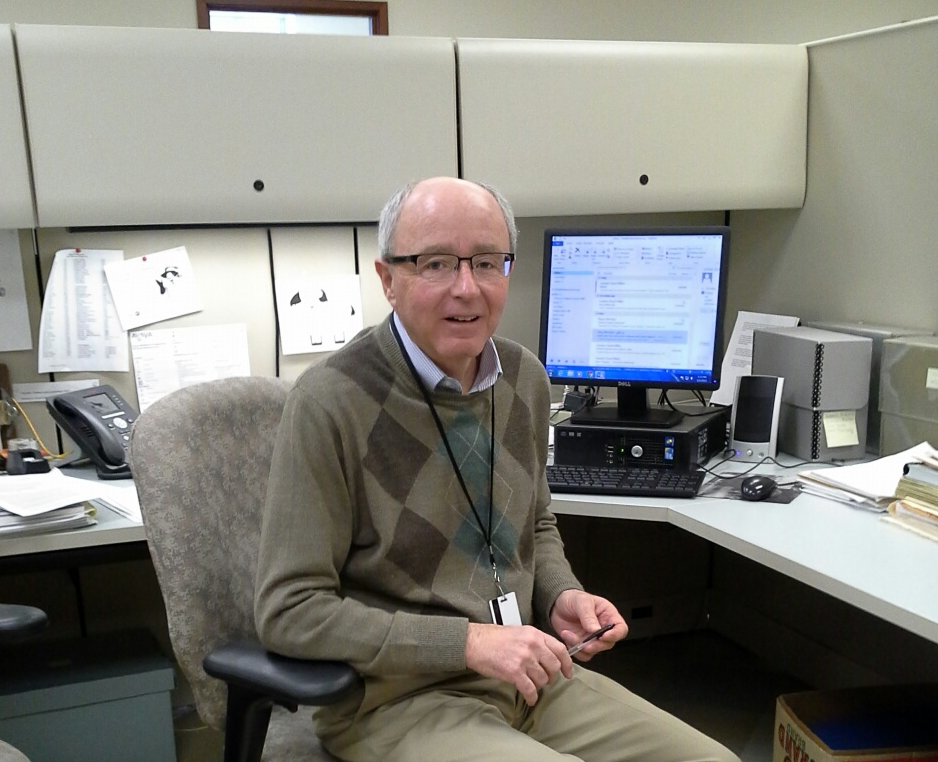 The author at his desk at The Henry Ford. / Photo by Jeanine Head Miller

I grew up on Detroit’s far west side, just north of Dearborn, during the 1950s and 1960s. History was always my favorite subject, and I fondly remember school field trips to what was then called Henry Ford Museum and Greenfield Village. I can trace my interest in American history to those visits and remember thinking how great it would be to work there someday.

I graduated from the University of Michigan at Ann Arbor in 1975 with a bachelor's degree in history. My original intention was to become a history teacher, but with teaching positions few and far between in those days, I ended up accepting a position in the mortgage department of Comerica Bank and stayed there for nearly 30 years.

I retired in 2008 and became a volunteer at The Henry Ford. After three years of doing computer data entry in the marketing department and helping at special events like Maker Faire, Old Car Festival, and Motor Muster, I met Jeanine Head Miller, Curator of Domestic Life at The Henry Ford. Jeanie was looking for a volunteer curatorial research assistant to work with her in the Historical Resources department. She was willing to take a chance on me, even though my professional life had been spent in banking, not historical research. The learning curve was steep, but with Jeanie’s knowledge and patience, I learned the ropes.

My primary focus as a volunteer has been to research the lives of some of the people who owned, made, or used the objects in The Henry Ford’s collection. Most of them were ordinary people, using these objects as part of their everyday activities.

I first look for clues in the object’s accession file—a file that contains whatever information we know about the object. Sometimes I find letters from the donor, often a descendent of the original owner, providing some family history and information about the maker or owner of the object, or how it may have been used. More often, though, there may be only a few clues—a name or a place. From these clues, I start my search to learn more about the background of the individual or family and the context of the object.

The advent of the Internet and genealogy websites like Ancestry.com—with access to census records, city directories, birth and death records, and other information—make researching the life of someone born more than a hundred years ago much easier. The census records are a particularly valuable tool in my research. They provide information about a person’s occupation, age, place of birth, marital status, immigration status, place of residence, home ownership, and more. The census also lists all the people living in the same home and their relationship to the head of the household.

Sites like Newspapers.com, with its access to many newspapers nationwide, can provide a wealth of information. I often find marriage and birth announcements, obituaries, and other information. Local historical societies are also a great research resource. I encounter other dedicated volunteers willing to search local records for information on people I am searching for—information not available online. 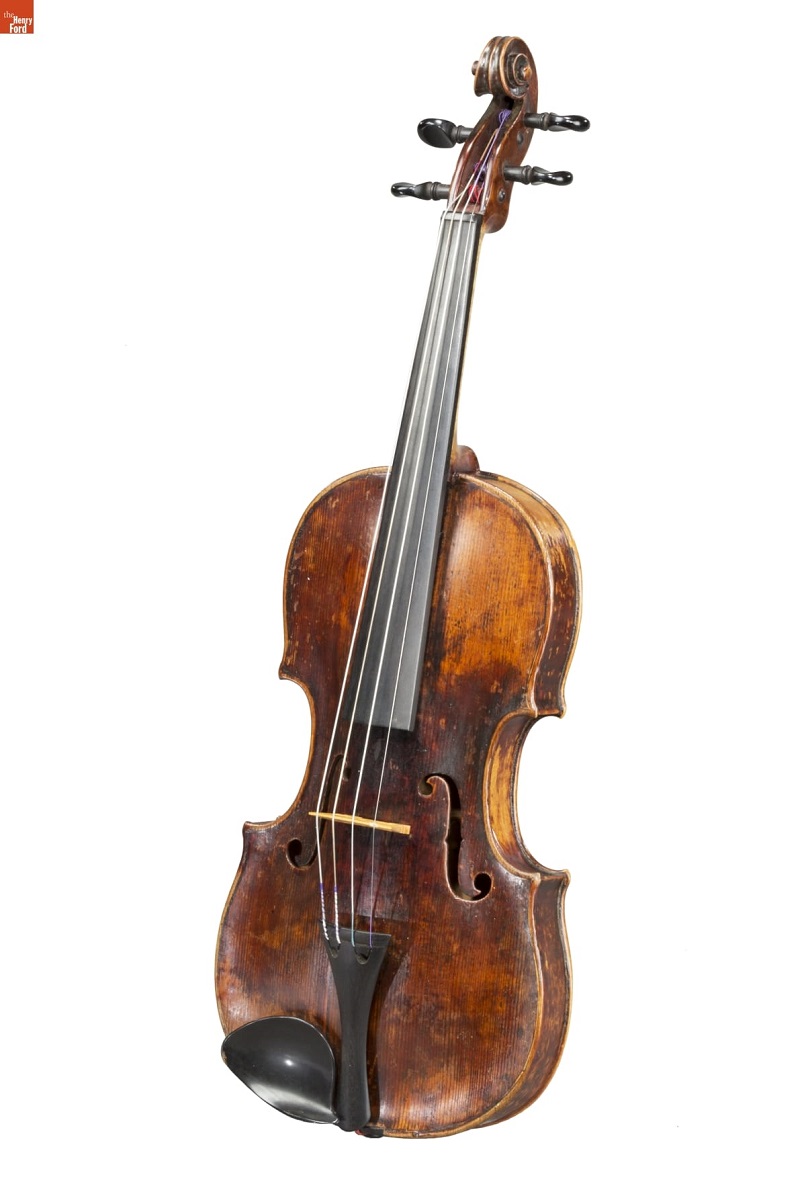 A few years ago, The Henry Ford acquired a violin used by Conrad Ambrose Hoffman (1839–1916), a musician and teacher from Pontiac, Michigan. The violin had been made in 1793 by Czech violin maker Johann Michael Willer (1753–1826). The family not only donated Hoffman’s violin and bow, but also related archival materials, including concert programs, sheet music and librettos, calling cards, and stationery.

These materials helped provide some information about Hoffman. But further research in sources like Ancestry.com, Newspapers.com, and the Palmer Family Papers: 1853–1940 at University of Michigan’s Bentley Historical Library helped me enrich Hoffman’s story.

The United States census records for Conrad Hoffman revealed that he was born in New York in 1839, but moved to Oakland County, Michigan, with his family by 1840. His father, Ambrose D. Hoffman (1806–1881), made his living as a farmer and cooper. The 1870 census revealed that 31-year-old Hoffman was employed as a music teacher and was living at the family home in Pontiac, Michigan, with his parents and two sisters.

Most of the information I discovered about Hoffman’s life as a musician and teacher came from a biography that I found on Google Books, Biographical Sketches of Leading Citizens of Oakland County, Michigan, published in 1903. The account recalled Hoffman’s early interest in music, the musical abilities of his mother and sisters, and his study of the violin as a young boy—including his traveling to Dresden, Germany, to study music at the Dresden Conservatorium. 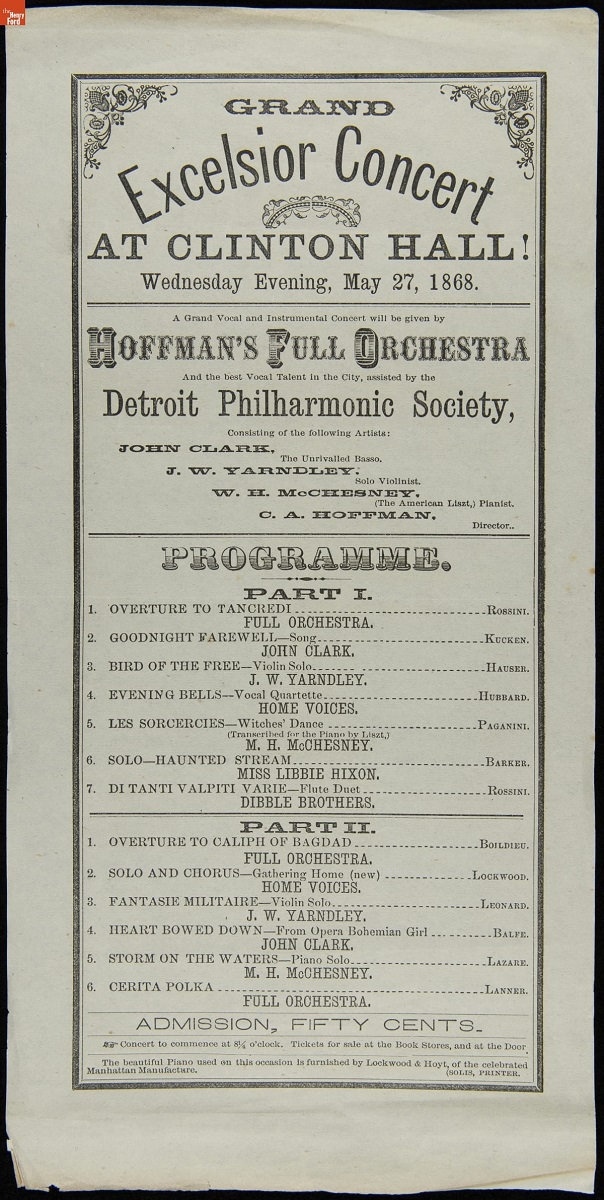 Hoffman’s biography also revealed that he served in the Union Army during the Civil War as a musician with the 15th Michigan Volunteer Infantry. In the years following the war, Hoffman organized an orchestra in the Pontiac area.

Concert programs from the 1860s and 1870s document Hoffman’s performances in places like Birmingham, Holly, and Pontiac, Michigan. He performed as a solo violinist, as well as a conductor.

I discovered through a marriage announcement, published in the Detroit Free Press on September 25, 1900, that Conrad Hoffman married for the first time at the age of 60. His bride was childhood friend and pianist Philomela Cowles Palmer (1851–1930). Philomela was the daughter of Charles Henry Palmer (1814–1887) of Pontiac, an entrepreneur who was instrumental in helping develop Michigan’s copper industry.

Conrad Hoffman died in 1916. His obituary, found on Newspapers.com, was published in the Detroit Free Press on December 9, 1916. The obituary described Mr. Hoffman as a well-known violinist, the owner of a collection of old violins, and the instructor of several of the best-known Michigan violinists and violin teachers. 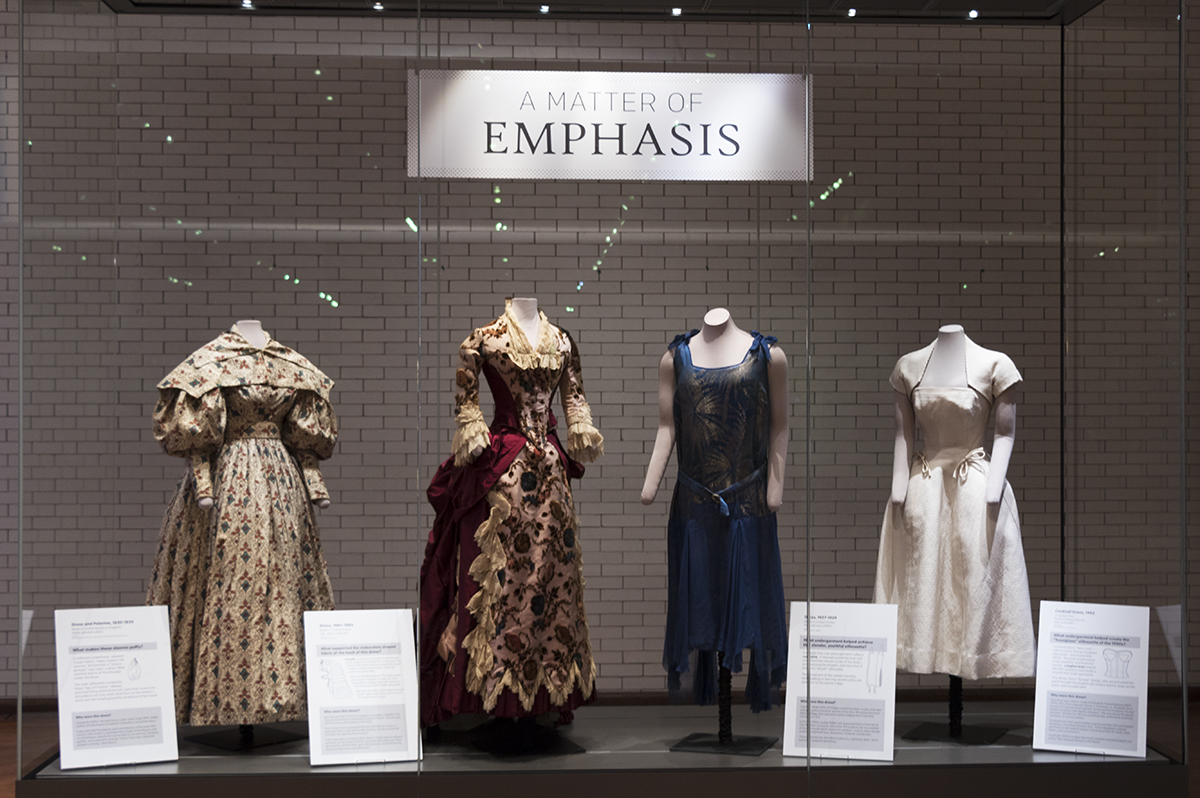 Audrey Wilder’s blue 1920s dress is second from the right.

In the fall of 2019, Jeanie Miller asked me to find out what I could about the life of Audrey Kenyon Wilder (1896–1979) of Albion, Michigan. Jeanie planned to use Wilder’s 1920s dress for an exhibit called What We Wore: A Matter of Emphasis in Henry Ford Museum of American Innovation. My task was to find out as much as I could about Wilder to help tell the story of the dress and the woman who wore it.

The donor correspondence in the accession file for Wilder’s dress provided just a few clues—her name and place of residence. I guessed Audrey Wilder’s birth date would be about 1900, based on the age of the dress. I was able to find four-year-old Wilder in the 1900 U.S. Census, living with her parents at the home of her paternal grandparents in Albion, Michigan. Her father was the owner of a lumber yard in Albion.

Yearbooks from high schools and colleges, which I found on Ancestry.com, provided information about Wilder’s education and career. I learned that she graduated from Albion High School in 1914, Albion College in 1918, and earned a master's degree from Columbia University in 1921. Wilder began teaching English at Albion College that same year.

In 1928, Audrey Wilder left Albion College to serve as Dean of Women at Ohio Northern University in Ada, Ohio. I was able to find an article written about her on Google Books, which shed some light on Audrey’s life and activities during this period of her life. The November 1935 issue of her college sorority newsletter, Anchora of Delta Gamma, published a story about Audrey’s life and career, entitled “Audrey Kenyon Wilder, Ohio Northern’s Dynamic Dean.” She is described as a woman “of exquisite grooming” and as having established the first social hall for women on the Ohio Northern campus, providing a setting for the female students on campus to hold teas, receptions, and co-ed dinners. 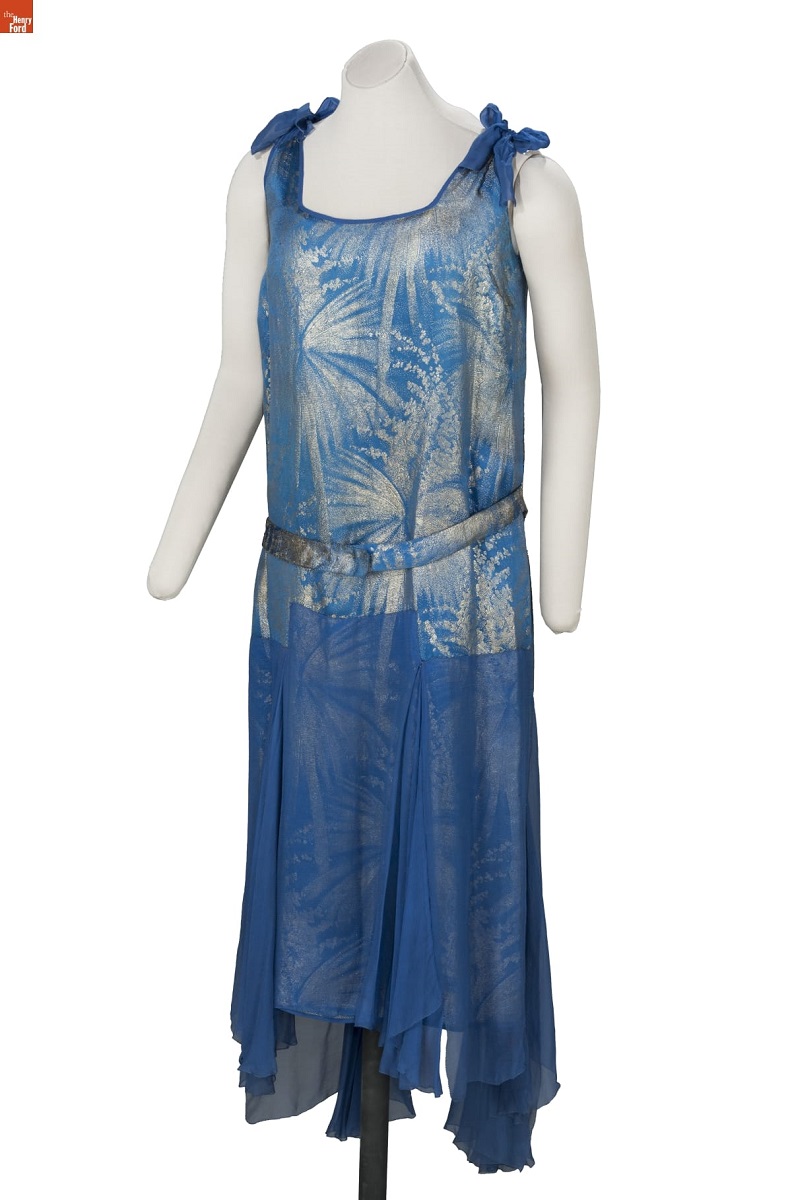 Tying an object to the story of its owner is the goal of my research. It is not hard to imagine Audrey Kenyon Wilder, the dynamic dean of exquisite grooming, attending a campus social function wearing the dress which is now part of the collection at The Henry Ford.

“Shopping” for the Collection

At times, I have assisted the curatorial staff in locating items for the museum’s collection. The curators identify a desired object and I then search eBay and other Internet sites to try to locate one in good condition. I then show the possibilities to the curator or curators, who select and acquire the object. These Internet sites make the search easier, but it often requires patient searching—sometimes for months. 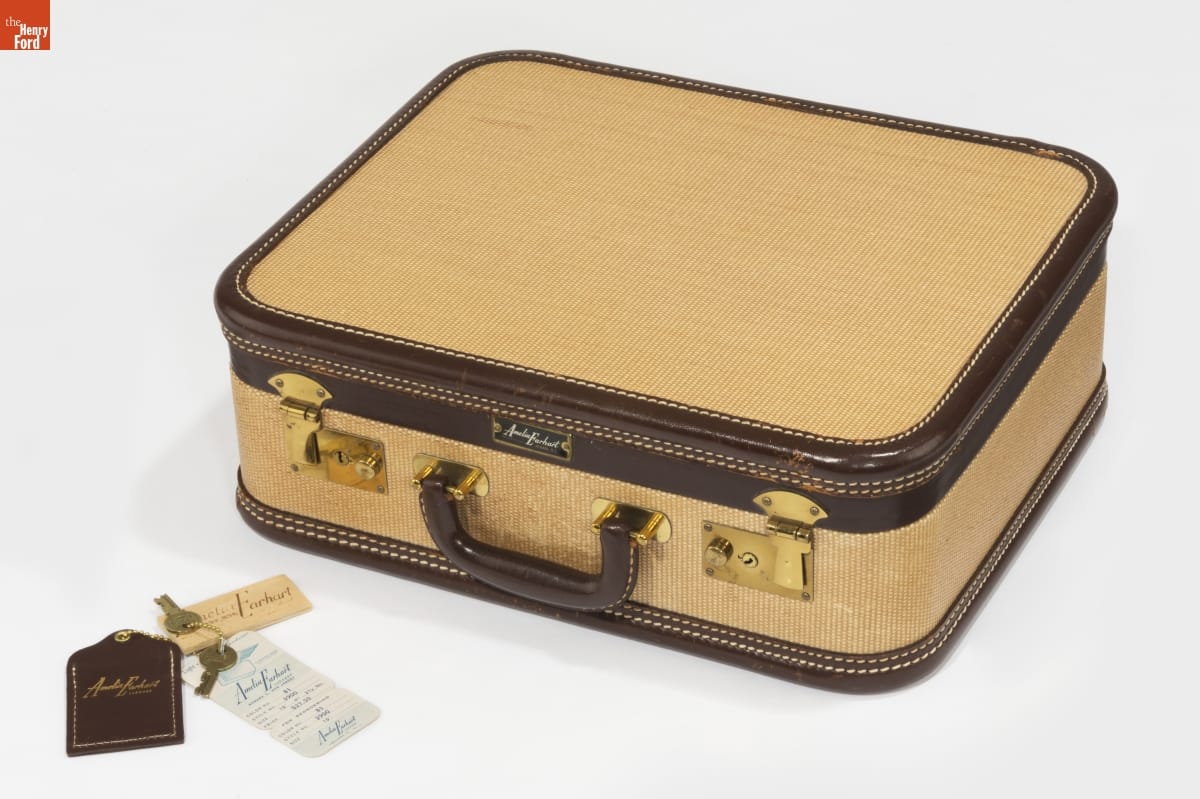 One example is an Amelia Earhart brand suitcase. Earhart endorsed various products, including a line of luggage, in order to finance her aviation activities. I searched for six months and found one in like-new condition with the original price tag and keys! Though this example dates from the decade following Earhart’s disappearance, it attests to the staying power of the Earhart brand—this luggage line sold well for decades. This suitcase is on display in the museum’s Heroes of the Sky exhibit, in the section dedicated to Amelia Earhart.

I could not have asked for a more rewarding and interesting way to spend some of my time during my retirement years. I was finally able to find that “job” that I thoroughly enjoy and never get tired of. With millions of artifacts in the collection at The Henry Ford, there is always another life to explore and, for me, another adventure.


Gil Gallagher is Curatorial Research Volunteer at The Henry Ford.