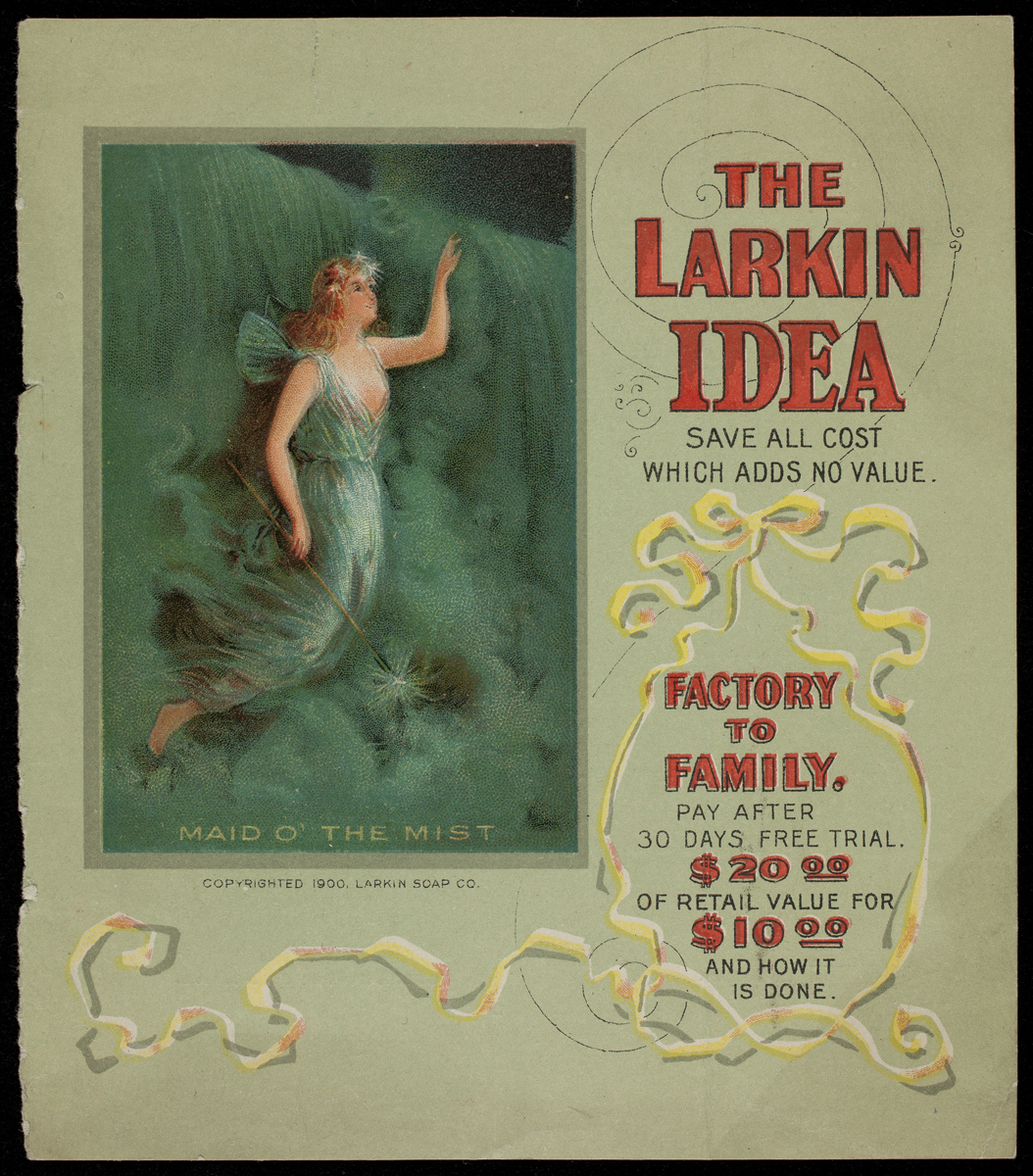 As part of the William Davidson Foundation Initiative for Entrepreneurship, we had the opportunity to delve into the history of the Larkin Company. What began as a small soap manufacturing business in 1875 became one of the nation’s leading mail-order businesses by 1900. This post highlights the Larkin Company’s rise to popularity under the multi-faceted, ingenious marketing strategy known as “The Larkin Idea."

While the Larkin Company sold its products throughout the country, the company had special appeal for rural customers, offering a broader range of product choices than stores in nearby villages and towns. The company would eventually develop a distribution system, contracting with local deliverymen to deliver Larkin products right to customers’ doorsteps – rather than customers having to pick them up in town. In the early 21st century, people today welcome this same opportunity for conveniently delivered goods! 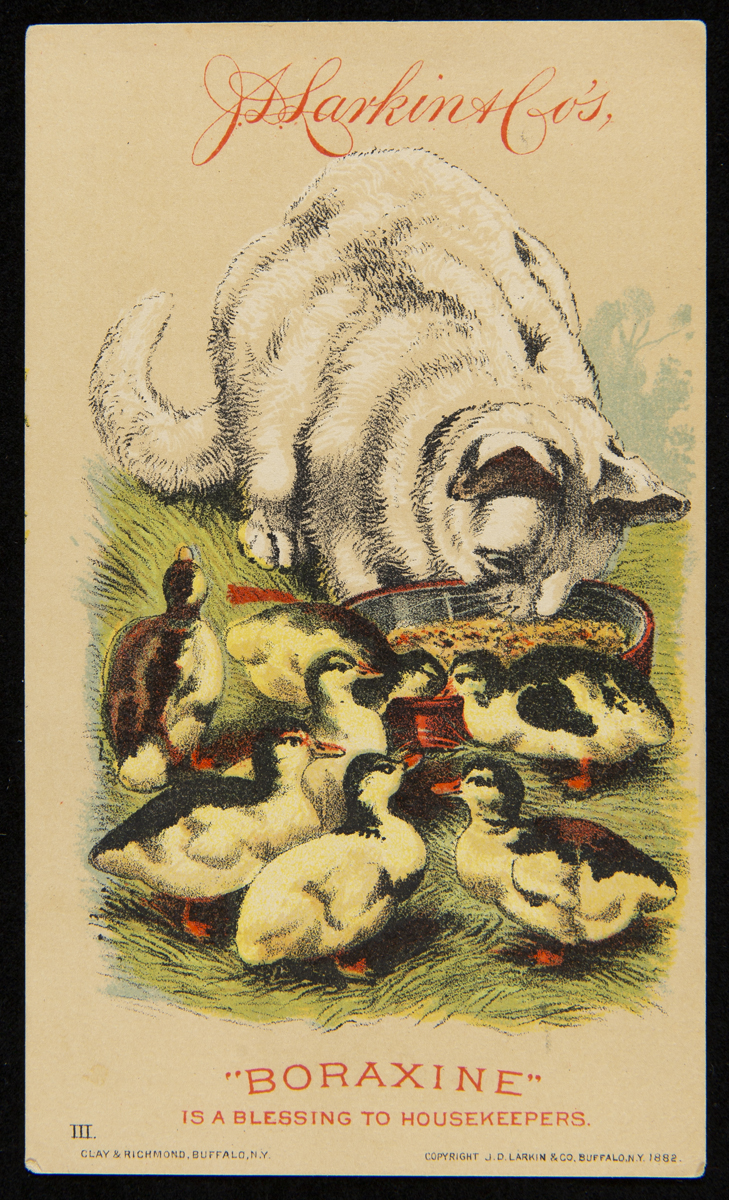 In 1875, having worked in the soap business for more than a decade, John D. Larkin created his own soap company in Buffalo, New York, called J.D. Larkin, Manufacturer of Plain and Fancy Soaps. This would later become known as the Larkin Company. The first product, made for laundry use, was a yellow bar known as Sweet Home Soap. Boraxine, a flaked laundry soap, quickly followed, and continued to be a signature item in product lists throughout the company’s history. 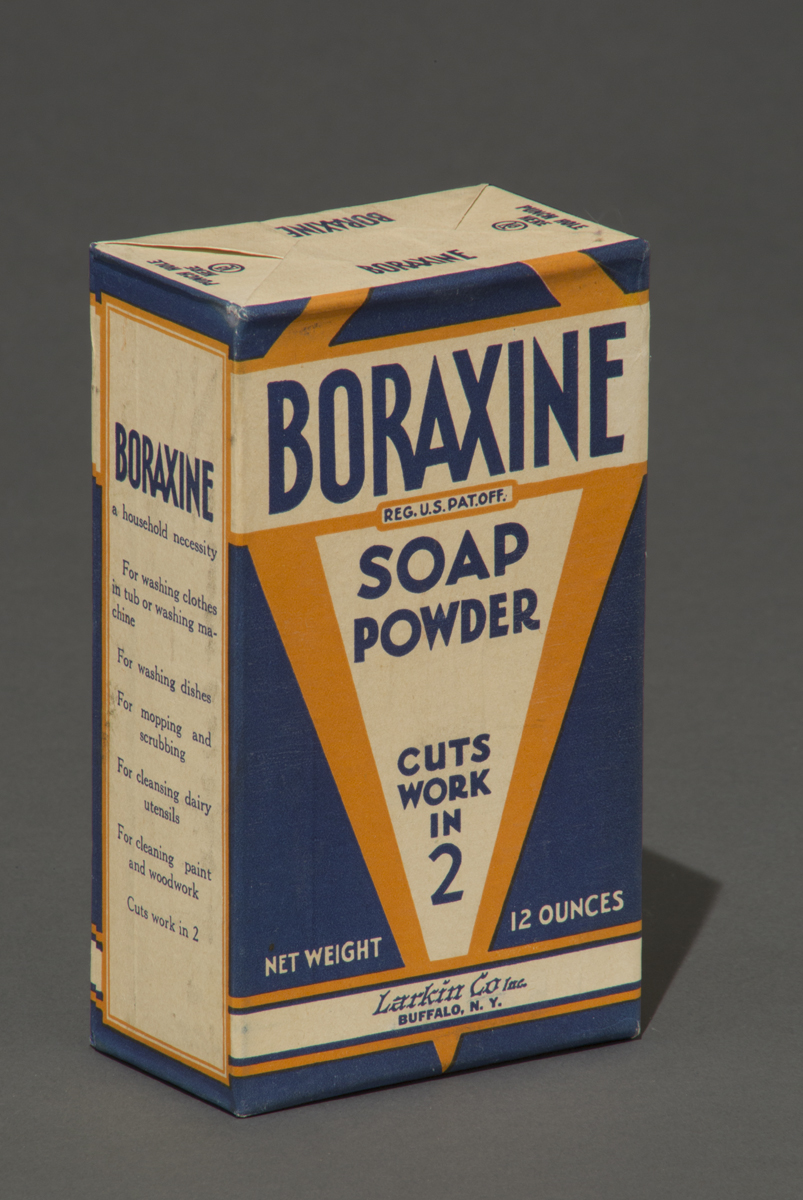 The first salesman for the company was Larkin’s brother-in-law, Elbert Hubbard. Hubbard was a skilled promoter and successful salesman, devising advertising strategies and boosting sales. In 1878, Hubbard was made a partner in the business, resulting in the company’s name change to J.D. Larkin & Company. With this partnership, Larkin oversaw the manufacturing of the products and Hubbard was placed in charge of advertising and promotion. One of the first strategies Hubbard adopted was offering a chromolithograph (color print) as a premium, or free giveaway, in each box of Boraxine. By 1883 – after additional products were added to Larkin’s line – Hubbard began offering finer premiums, such as a Japanese silk handkerchief in each box of “Elite” Toilet Soap. 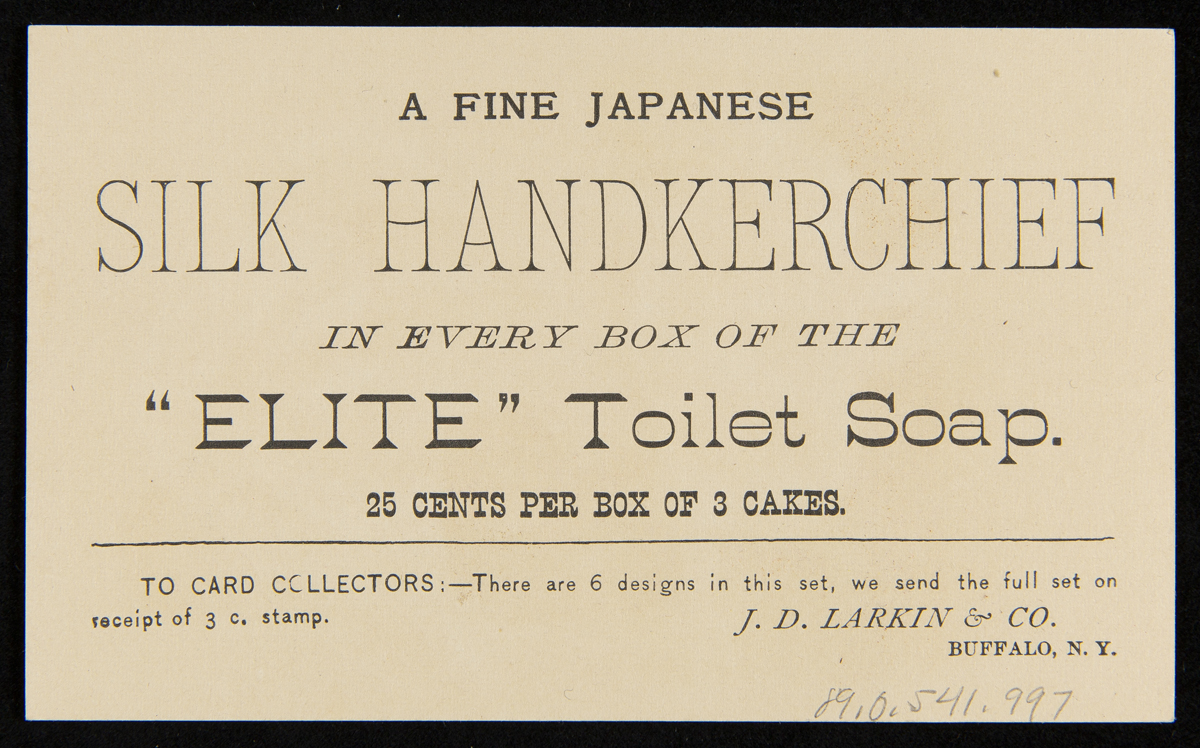 After years of “slinging soap,” Hubbard noted that direct sales to housewives were more profitable than selling to local merchants. The company was doing quite well – having distributors in every state east of the Rocky Mountains in its first decade – but Larkin and Hubbard believed that the company had even greater potential. In order to maximize profits, the company decided to eliminate all middlemen (including the sales force), thus entering the mail-order industry. The mail-order business was not new – Montgomery Ward & Company had made this popular a decade earlier. But in 1885, Hubbard developed a plan, called “The Larkin Idea,” that offered giveaways with the purchase of particular items from the company’s mail-order catalogs. 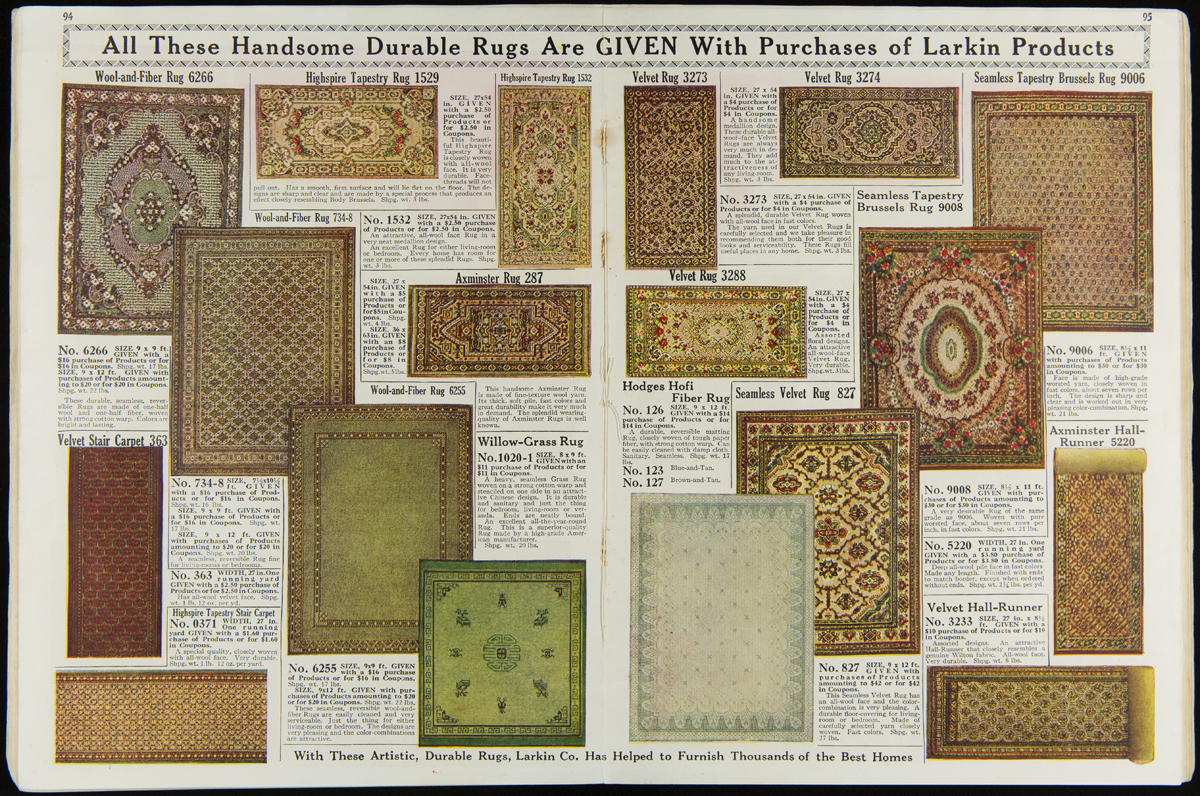 “The Larkin Idea” was simple: In cutting out all middlemen and selling Larkin products directly to housewives, the money that would have gone to the payroll of the middlemen would instead be used to create desirable premiums that would be given to customers with the purchase of Larkin products. This idea was encapsulated by the slogan, “Factory-to-Family,” and the tagline of “The Larkin Idea” became, “Save All Cost Which Adds No Value.” 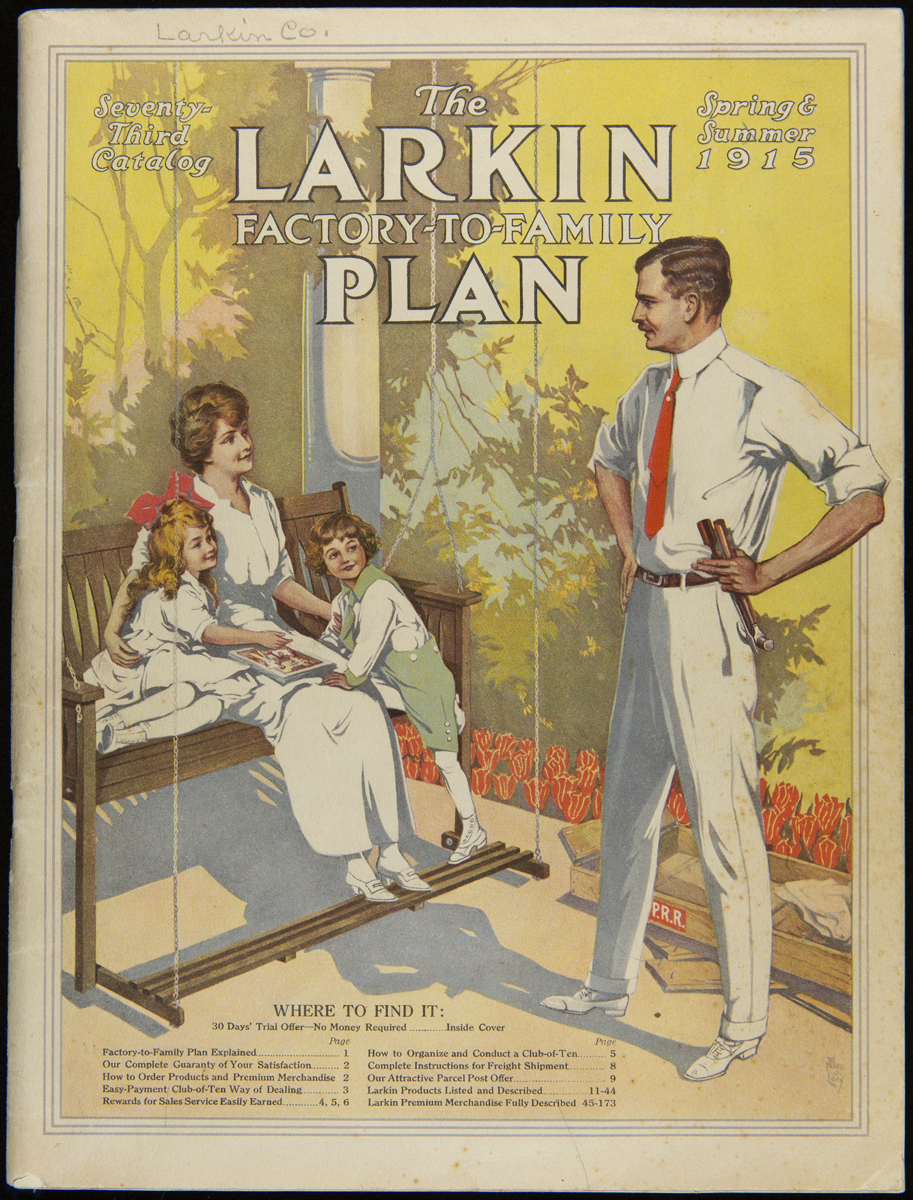 The first iteration of “The Larkin Idea” came in 1886 with the introduction of a Combination Box. By this time, the company was offering nine different soap products. At first, the Combination Box sold for $6, but a few years later, a $10 option emerged, offering enough products to last a family the entire year. The $10 Combination Boxes quickly gained popularity as customers could receive 142 products – 100 of those being Sweet Home Soap – and a free premium worth $10. Larkin also introduced a 30-day policy in which customers had 30 days to try a product before paying for it. This gave peace of mind to customers who wanted to try a product, risk-free, and also developed trust between the company and consumer. The public embraced “The Larkin Idea” with enthusiasm, ordering nearly 91,000 Combination Boxes a year!

By 1892, the company changed its name once more, to Larkin Soap Manufacturing Company. As the popularity of the Combination Boxes grew, Larkin sought to expand its product and premium offerings. In 1897, Larkin offered 16 products – including 14 different soaps, a cold cream, and tooth powder – and that number increased every year. This led to the company eventually dropping “soap” from its name to become the Larkin Company in 1904.

With the success of the Combination Box and the increasing number of customers nationwide, the company introduced another facet of “The Larkin Idea,” which would prove to be invaluable: Larkin Clubs. Women across the country were encouraged to become Larkin Secretaries, and as such they would gather friends and family to purchase products together. A Club-of-Ten was encouraged to have all members buy $1 worth of products each month, and a different member of the club would receive a premium of their choice every month. 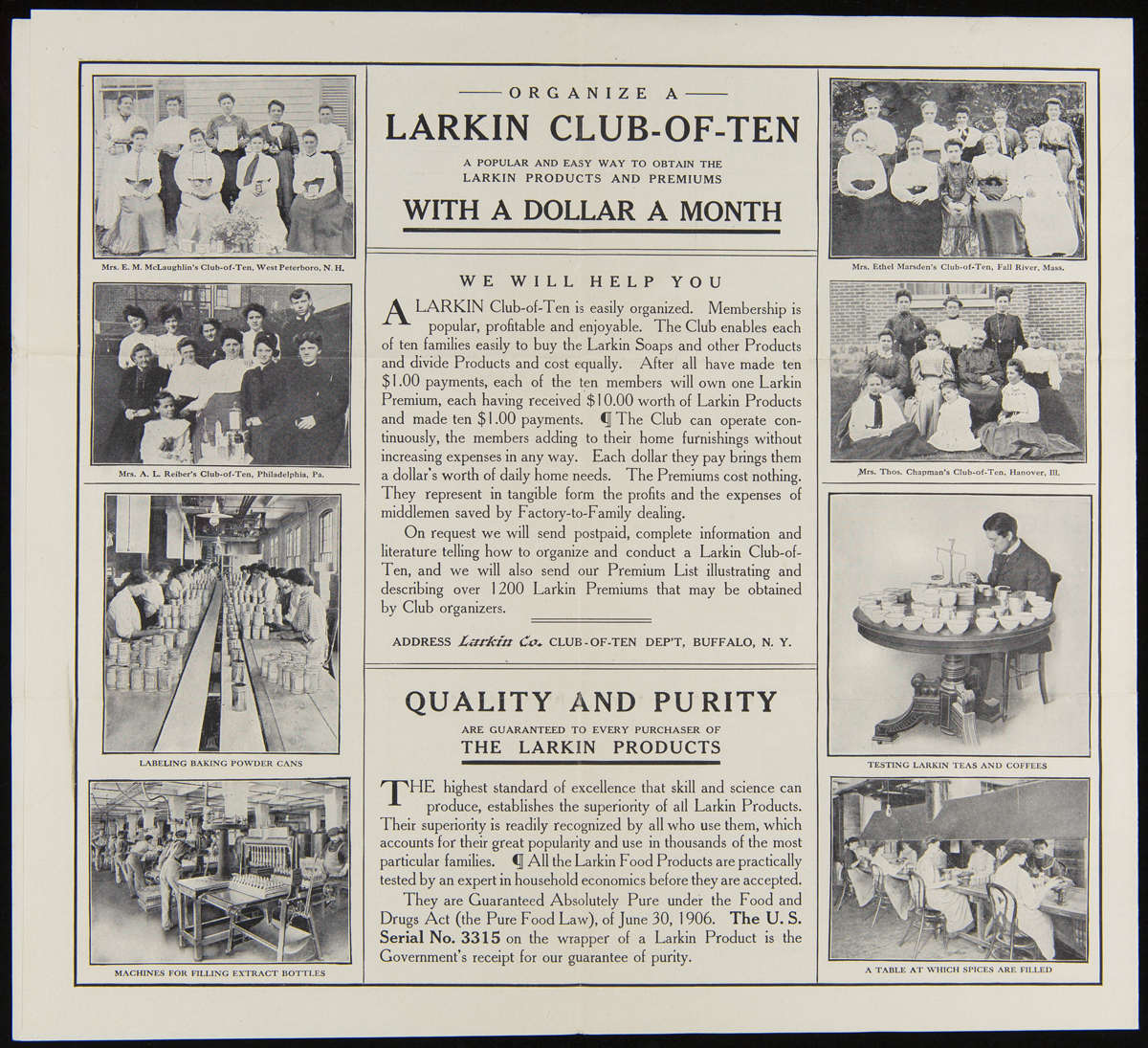 Advertisement for a Larkin Club-of-Ten in the Trade Catalog, “A Practical Plan of Saving: The Larkin Idea Factory-to-Family Dealing,” 1906. / THF298079 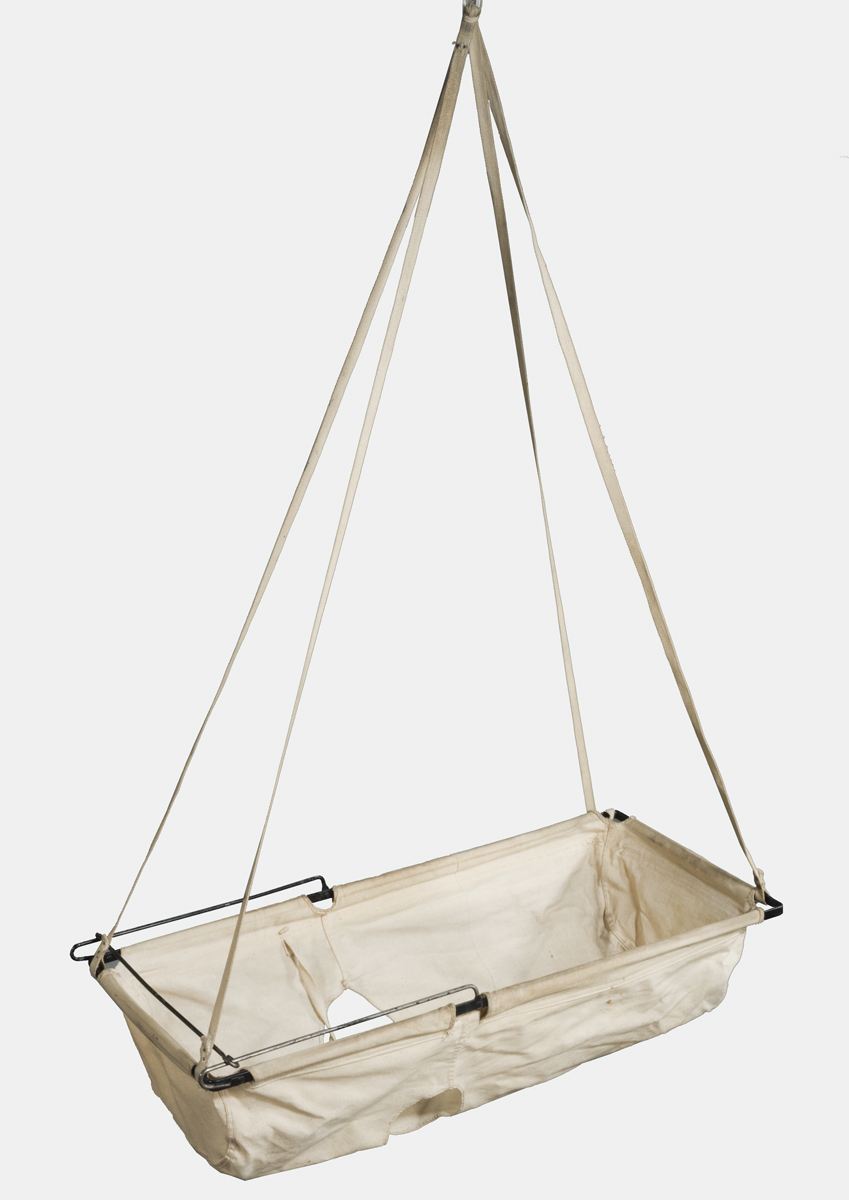 This Larkin Company infant swing/bed, was given to a woman by her sister, who sold Larkin products. (Gift of Ellen J. Adams) / THF174549

Women found a sense of pride in their participation in the clubs and enjoyed the social aspect of monthly meetings. At its peak, there were 90,000 Larkin Secretaries around the country. The Larkin Clubs were such a tremendous promotional force that the company stopped selling Combination Boxes in order to focus on its ever-increasing product and premium offerings. By 1905, the company began offering teas, spices, and additional foodstuffs among its products. Five years later, the company had added paints and varnishes, as well as rugs, clothing, and other textiles to its product line – along with 1,700 premiums to choose from, ranging from children’s toys to clothing to furniture. In 1915, the catalog featured 700 Larkin products spread over 33 pages, and offered 131 pages of premiums. One of the company’s advertising campaigns involved the idea that customers could furnish their entire house with Larkin products. This catalog for Larkin Wallpaper is an example of this idea in action. 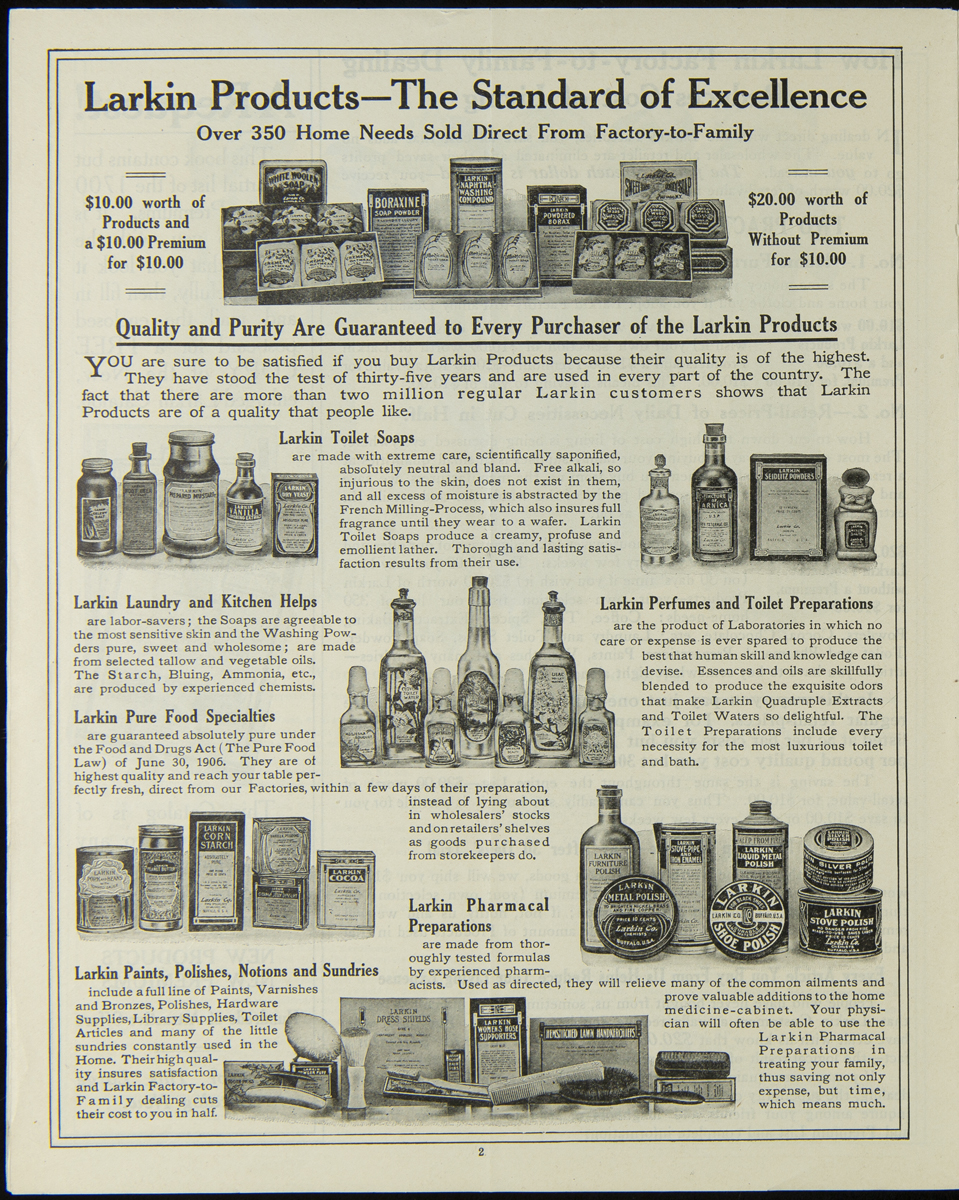 Page showing a variety of Larkin products from the Trade Catalog, “The Larkin Home-Helper,” circa 1910 / THF297831 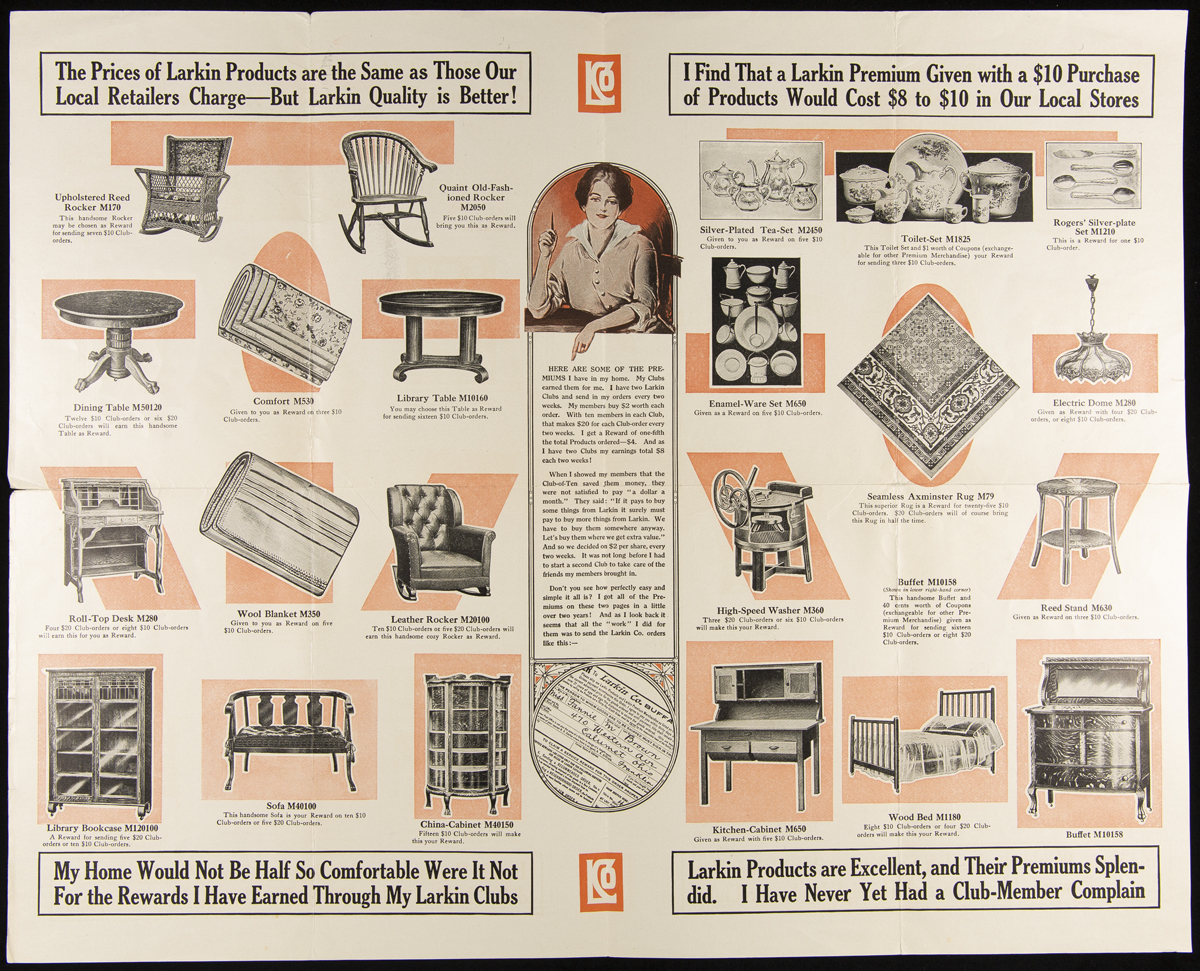 Larkin Premiums advertised in the publication, “My Larkin Clubs Earned These for Me,” circa 1912 / THF298076 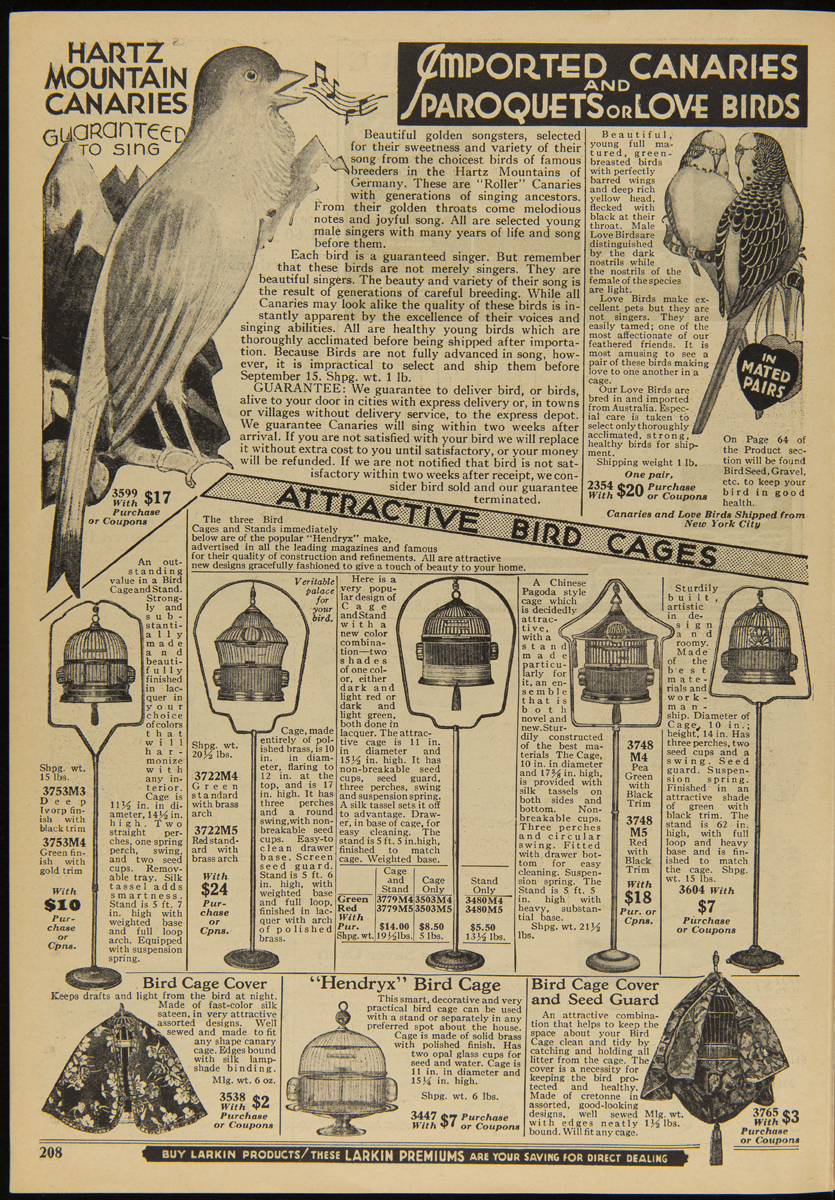 Page from Larkin Company Trade Catalog, “The World’s Greatest Premium Values,” Fall and Winter 1930. The catalog from 1930 included one of the more unusual premiums Larkin offered - Hartz Mountain Canaries (guaranteed to sing) or a pair of mated Love Birds. Click here to view the 1930 catalog! / THF298067

As “The Larkin Idea” continued to gain popularity, the Larkin Company sought to bring those companies that produced the premiums under the Larkin umbrella. At its height, Larkin had over 30 subsidiary companies, and had furnished seed money to establish such businesses as the Barcolo Manufacturing Company, to produce furniture, and Buffalo Pottery to produce pottery and kitchenware. Since 1896, the company had begun expanding its manufacturing complex. This process continued through 1912, with 21 new structures built to accommodate the rapidly growing product and premiums list. 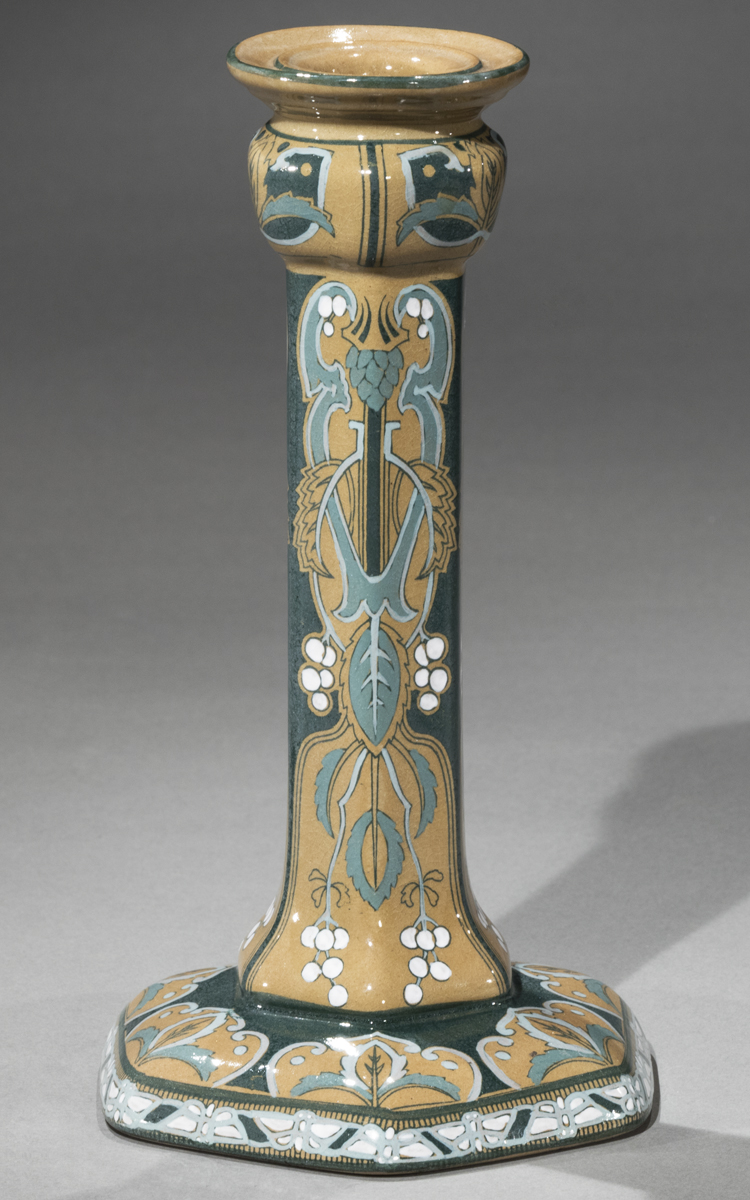 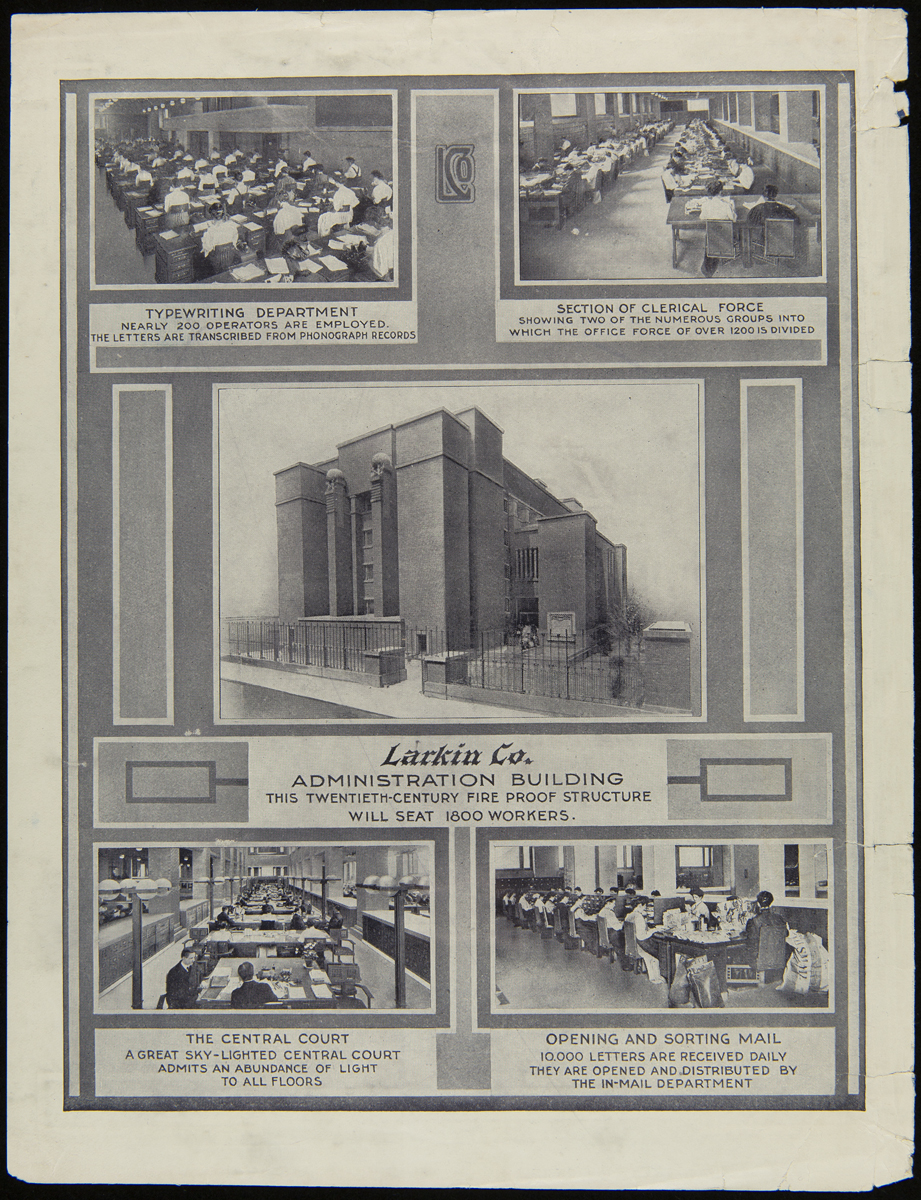 Beginning in 1905, the company established branches and warehouses – first in Cleveland, and then in Boston, Chicago, New York City, Peoria and Philadelphia. With this expansion, Larkin was able to better serve its customers across the country. Despite experiencing significant growth, by 1918 the company found it had a surplus of food products far exceeding demand. Unable to move the product fast enough through mail order or the Secretary system, Larkin created retail establishments called “Larkin Economy Stores” as a way to sell these products. By 1922, there were 103 stores in Buffalo and northwestern New York, as well as others near the additional branches. 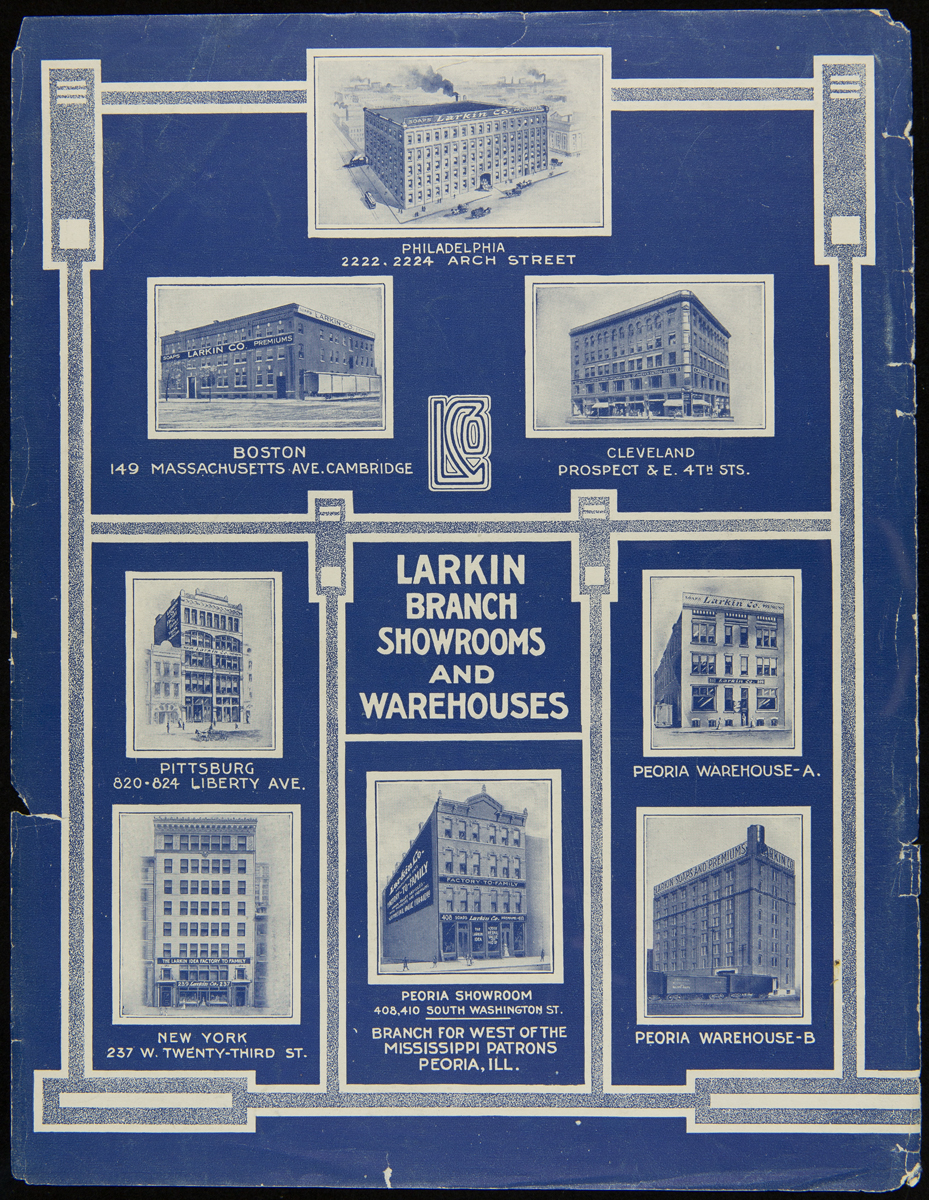 “The Larkin Idea” had taken the company to significant heights. By the mid-1920s, however, the company was beginning to falter for a number of reasons. National chains like A&P grocery stores and Woolworth’s presented stiff competition. Automobiles made going shopping easier, causing mail-order businesses to become less popular. Perhaps the greatest influence in Larkin’s demise was World War I, which had brought many Larkin Secretaries out of their homes and into the workforce, weakening the Larkin sales structure. The crippling economy during the Great Depression also impacted the company.

Between 1924 and 1926, all of the company’s top leadership either retired or passed away, including Larkin himself. Having failed to pass along knowledge and nurture younger leadership, the company was left with little expertise, leading to the company’s gradual closing. 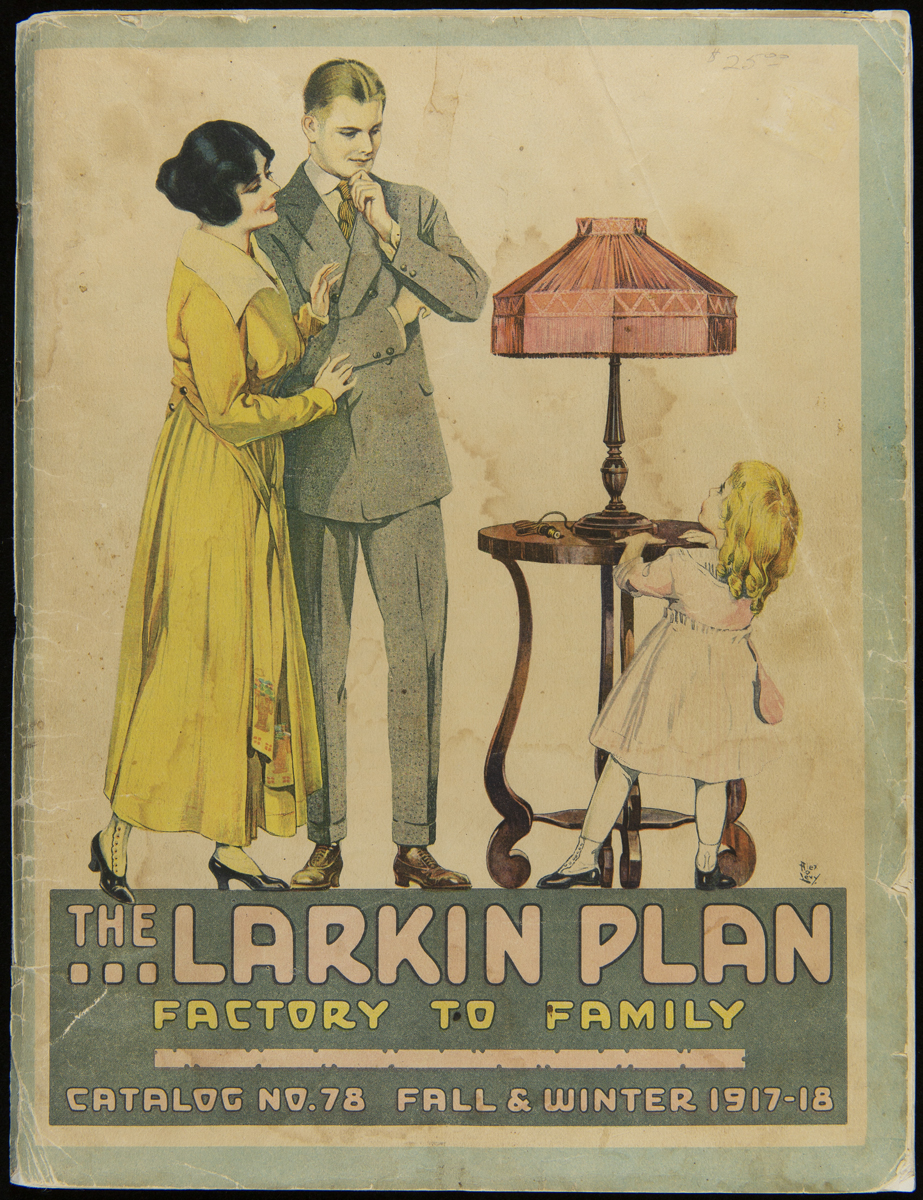 What had started as a small soap manufacturing company became prominent enough to hold its own despite the tremendous popularity of mass-marketers, like Sears, Roebuck and Company, and Montgomery Ward & Company. Through innovative marketing strategies and an entrepreneurial spirit, the Larkin Company experienced significant growth in a short period of time, finding its way into households across America.


Samantha Johnson is Project Curator for the William Davidson Foundation Initiative for Entrepreneurship at The Henry Ford. Special thanks to Jeanine Head Miller, Curator of Domestic Life at The Henry Ford, for sharing her knowledge and for reviewing this content.