As we look forward to the Greenfield Village opening of 2017, our guests and staff alike enjoy reconnecting with our amazing array of historic buildings. Each of them not only represent different periods of American history, they also hold so many fascinating stories. Among the more interesting, are how they came to have new lives here in Greenfield Village. The Logan County Courthouse’s story is among my favorites.

Abraham Lincoln featured prominently in Henry Ford’s plans for Greenfield Village which revolved around the story of how everyday people with humble beginnings would go on to play important roles in American history. Henry Ford was a “later comer” to the Lincoln collecting world, but with significant resources at his disposal, he did manage to secure a few very important items. The Logan County Courthouse is among them. 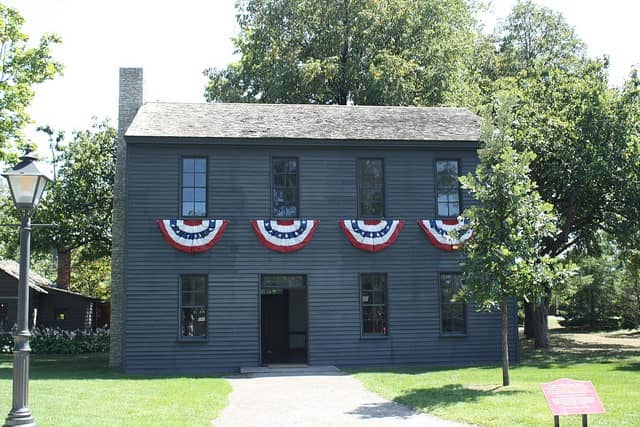 Logan County Courthouse as it stands today in Greenfield Village.

Authenticated objects, related to Lincoln’s early life, were especially scarce by the late 1920s.There seemed to be an abundance of items supposedly associated and attributed to Lincoln, especially split rails and things made from them. But very few of these were the real thing. For Henry Ford, the idea of acquiring an actual building directly tied to Abraham Lincoln seemed unlikely. 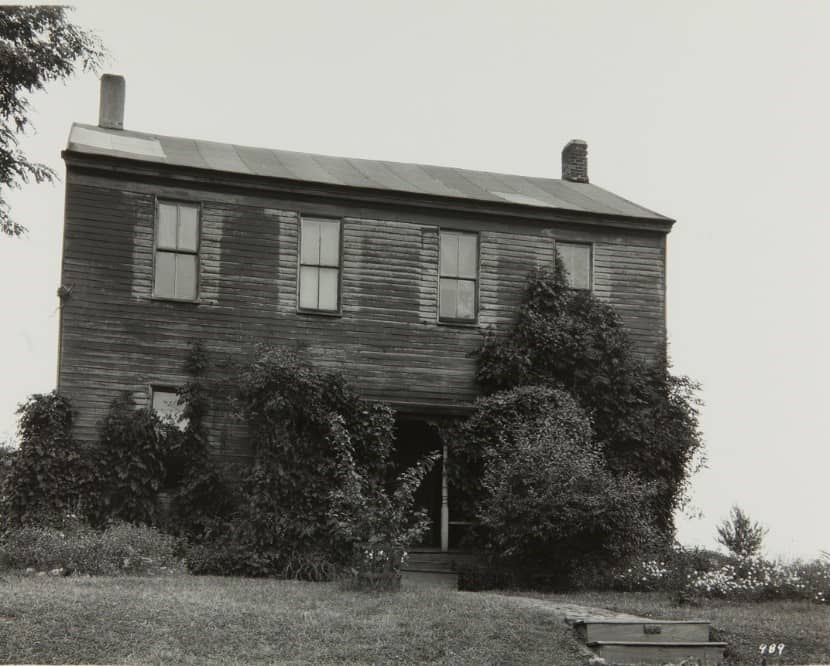 But, in the summer of 1929, through a local connection, Henry Ford was made aware that the old 1840 Postville/ Logan County, Illinois courthouse, where Lincoln practiced law, was available for sale. The 89-year-old building, was used as a rented private dwelling, and was in run down condition, described by some as “derelict”. It was owned by the elderly Judge Timothy Beach and his wife. They were fully aware of the building’s storied history, and had made several unsuccessful attempts to turn the historic building over to Logan County in return for funding the restoration, and taking over its on-going care and maintenance. 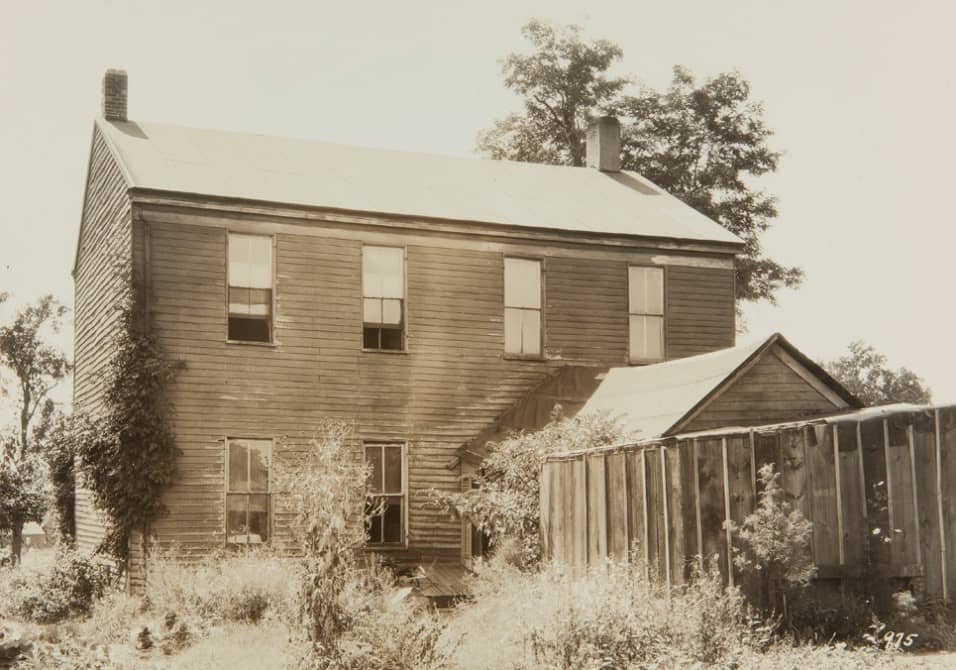 View of rear section of building with shed addition, September 1929

Seeing no other options, the Beaches agreed to the sale of the building to Henry Ford via one of his agents. They initially seemed unaware of Henry Ford intentions to move the building to Greenfield Village, assuming it was to be restored on-site much like another historic properties Ford had taken over. The local newspaper, The Courier, even quoted Mrs. Beach as saying “she would refund to Mr. Ford if it was his plan to take the building away from Lincoln, as nothing was said by the agent about removal”.  By late August of 1929, the entire project in West Lincoln, Illinois, had captured the national spotlight and the old courthouse suddenly had garnered a huge amount of attention, even becoming a tourist destination. 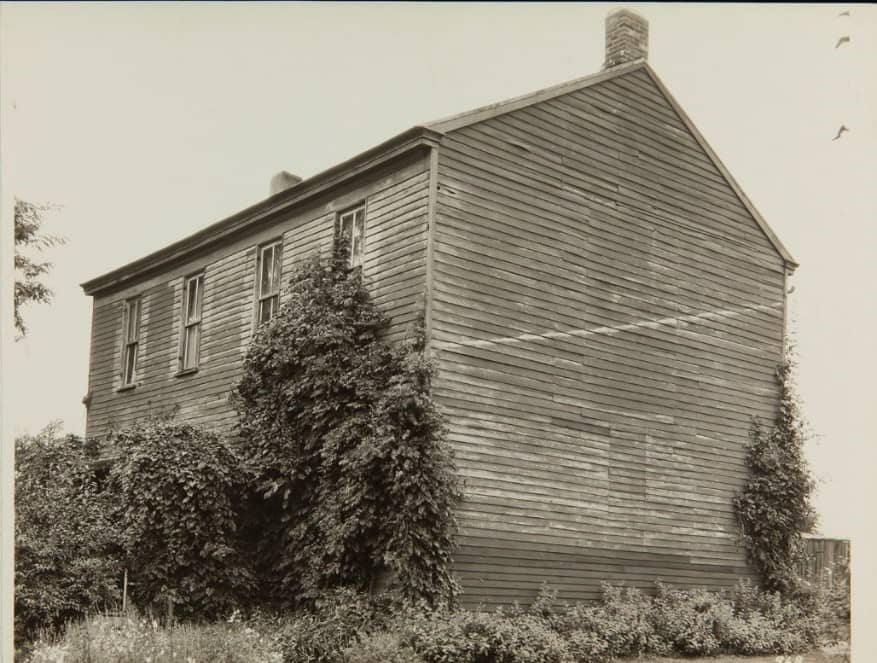 View of side currently adjacent to Dr. Howard’s Office, September, 1929.  This view shows evidence of filled in window openings. The window currently behind the judge’s bench was restored.

By early September, local resistance to its removal was growing, and Henry Ford felt the need to pay a visit to personally inspect the building and meet with local officials, and the Beaches. He clearly made his case with the owners and finalized the deal. As reported, “Ford sympathized with the sentiment of the community but thought that the citizens should look at the matter from a broader viewpoint. He spoke for the cooperation of the community with him in making a perpetual memorial for the town at Dearborn, where the world would witness it. My only desire is to square my own conscience with what I think will be for the greatest good to the greatest number of people.” 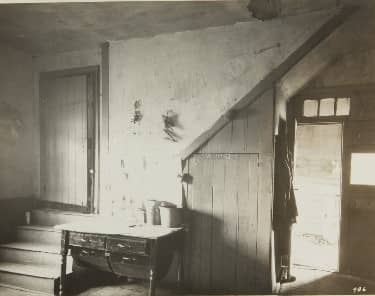 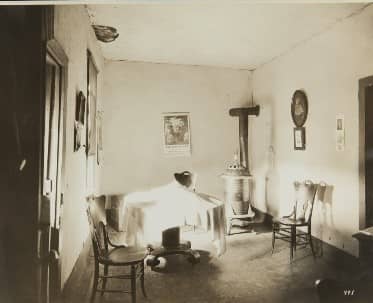 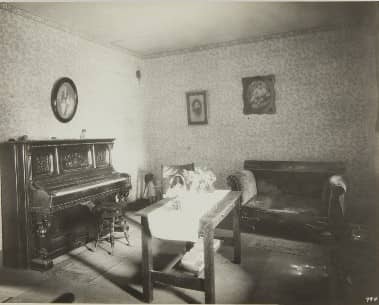 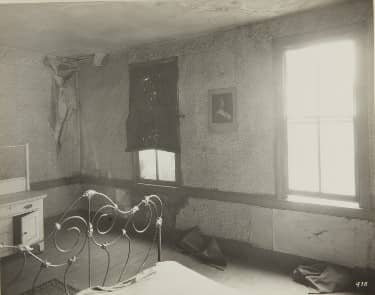 The courthouse would indeed be leaving West Lincoln, and by September 6, Henry Ford’s crew arrived to begin the process of study, dismantling, and packing for the trip to Dearborn. Local resistance to the move continued as the final paperwork was filed, and the newly purchased land was secured by Ford’s staff. By September 11, the resistance had run its course and the dismantling process began. It was also revealed that the city, county, several local organizations, and even the state of Illinois had all been offered several opportunities to acquire the building and take actions to preserve it. They all had declined the various offers over the years. It was then understood that Judge & Mrs. Beach, in the end, had acted on what was best for the historic building and should not be “subjected to criticism.” Judge Beach would die a week later, on September 19th.

The dismantling and discovery process was closely covered by the local newspapers, and as the building came apart, its original design was revealed.

Beginning as early as the late 1840s, changes had taken place on both the exterior and interior of the building. By 1880, the building had been converted from a commercial building into a dwelling and that was the state in which it was found by Ford’s crew in 1929. The doorway and first floor interior had been radically changed and eventually, a covered porch was added to what is now the main entrance, and a shed addition to the rear. But, the most significant change, was the move off its original foundation, 86 feet forward on the lot.

In 1848, the county seat moved from Postville, to Mount Pulaski. At that time the courthouse was decommissioned, and after a legal battle between the County, and the original investor/builders of the building, it was sold to Solomon Kahn. None other than Abraham Lincoln successfully represented the County in the matter. Mr. Kahn converted the building into a general store, and ran the local post office within.  It was he who moved the building to its new location. In doing so, the old limestone foundation was left behind, and the original limestone chimney and interior fireplaces were demolished. A new brick lined cellar and foundation was created, along with updated internal brick chimneys on each end of the building, designed to accommodate cast-iron heating stoves. This took place before 1850. 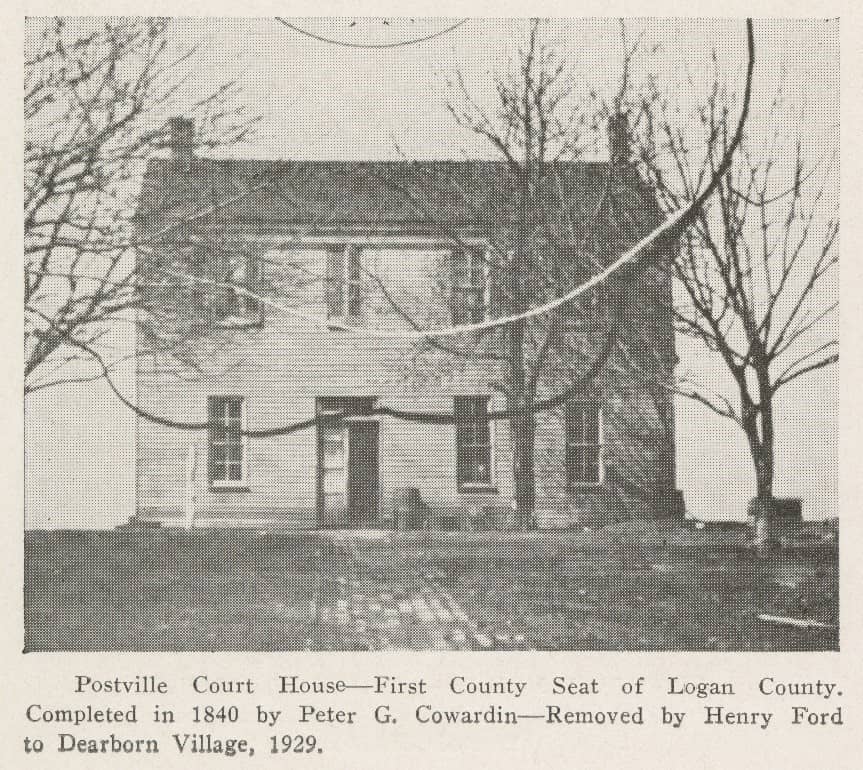 Photographs taken in September of 1929, show the outline of the original chimney on the side of the building where it has been re-created today. Further discoveries revealed the original floor plan of a large single room on the first-floor, and the original framing for the room divisions on the second.  Second floor photographs show the original wall studs, baseboards, chair rails, window, and door frames, all directly attached to the framing, with lath and plaster added after the fact. The framing of the walls on the first floor were all clearly added after the original build. The oldest photograph of the courthouse shows it on its second site with its original window and door arrangement still in place, but with new brick chimneys. The photo dates from between 1850 and 1880.

It was some of the older inhabitants of the area that alerted Henry Ford’s staff as to the original location of the foundation. Once located, the original foundation revealed the dimensions of the original first-floor fireplace. All the stones were carefully removed and shipped to Dearborn. The courthouse rests on this foundation today. The local newspaper also reported that while excavating the foundation, a large key and doorknob were found at the edge, aligned where the front door would have been located. 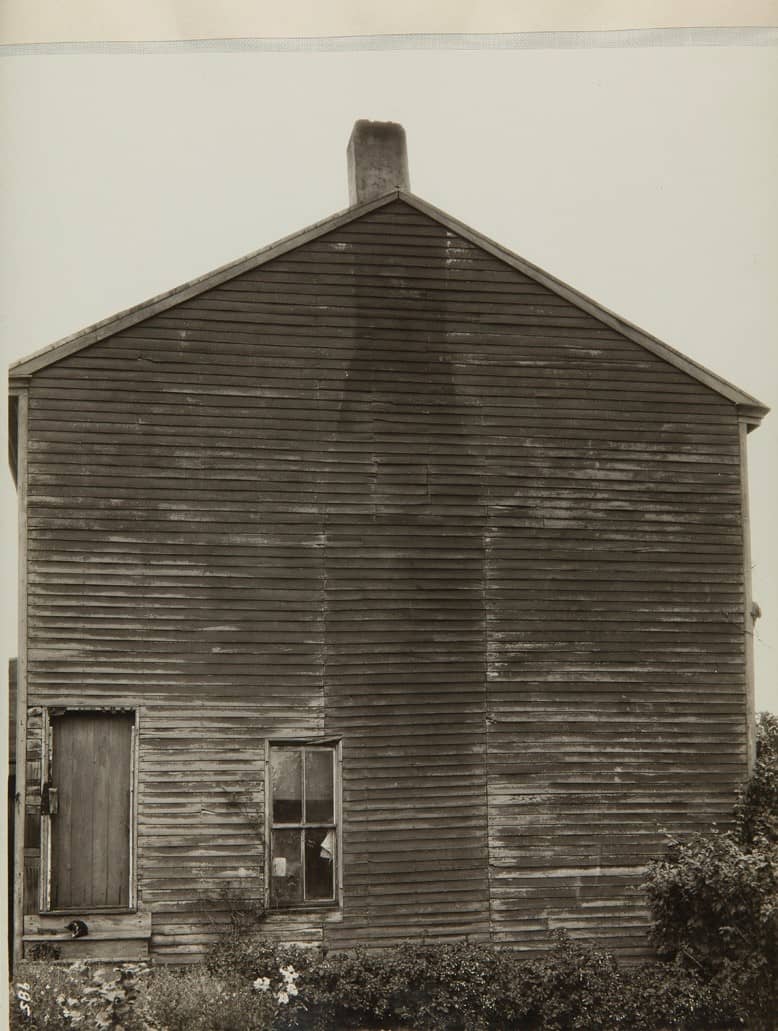 View of side that currently faces Scotch Settlement School, September, 1929.  Shadow of original stone chimney is visible. Patched sections of siding show that originally, the stone would have been flush with the siding until approximately the top third, which would have extended out from the building like the entire chimney currently does. The window and door are late additions.

By September 20th, the building, consisting of two car loads of material, was on its way to Dearborn. Reconstruction in Greenfield Village began almost immediately at a frenzied pace. Finishing touches were still being applied right up until the October 21st dedication of Greenfield Village. Edward Cutler oversaw the final design elements needed to restore the building along with the actual work of reconstructing it. All the first- floor details, including the fireplace, mantle, and judges bench had to be re-created. The first-floor interior trim was reproduced in walnut, and was based on the original trim that survived on the second floor. The second floor, using a large amount of original material, including flooring, was also restored to its original appearance. Even the original plaster was collected, re-ground, and used to re-plaster the interior walls. 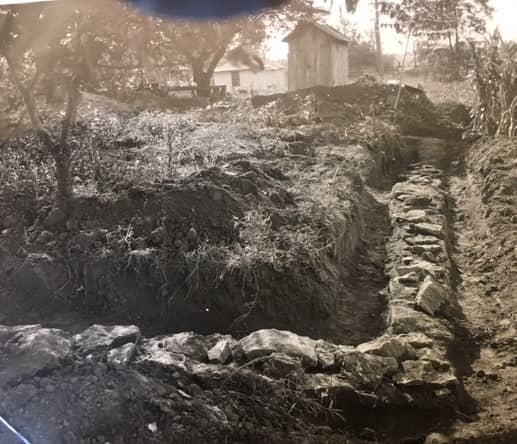 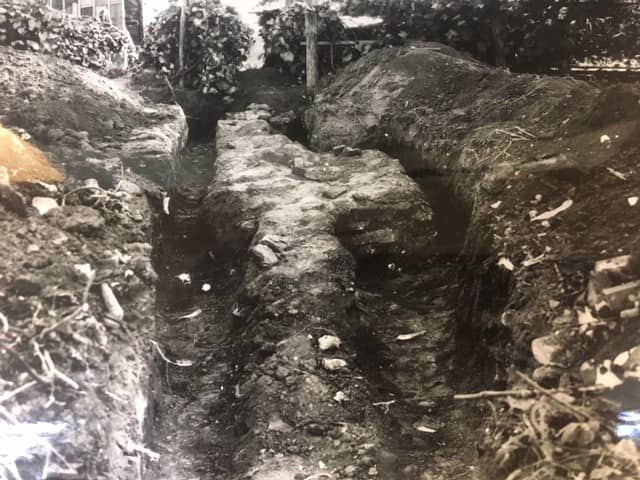 Based on the oldest of the original photographs, all new windows and exterior doors were also reproduced. Where possible, the original exterior walnut siding was also restored, and re-applied to the building and secured with brass screws.This was not a period technique, but rather a solution by Cutler to ensure the original siding with its worn nail holes, would stay in place.

The result was a place where Henry Ford could now display, and share his collection of Lincoln associated artifacts, including the most famous of all, the rocking chair from the presidential booth in Ford’s theater where Abraham Lincoln was sitting when he was shot by John Wilkes Booth in April of 1865. 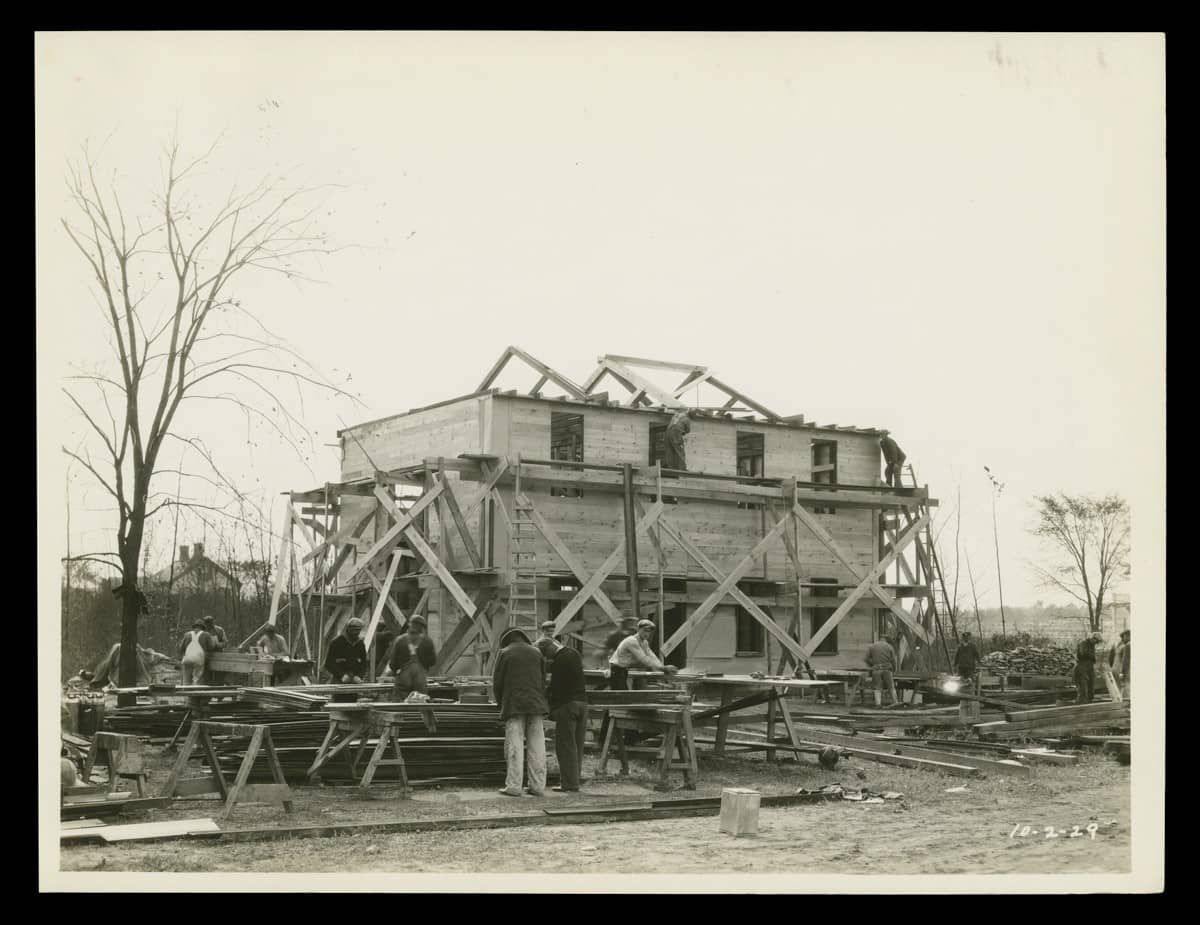 Re-construction well under way in Greenfield Village on October, 2, 1929. The building would be complete for the October 21, dedication. The Sarah Jordan Boarding House can be seen in the distance. 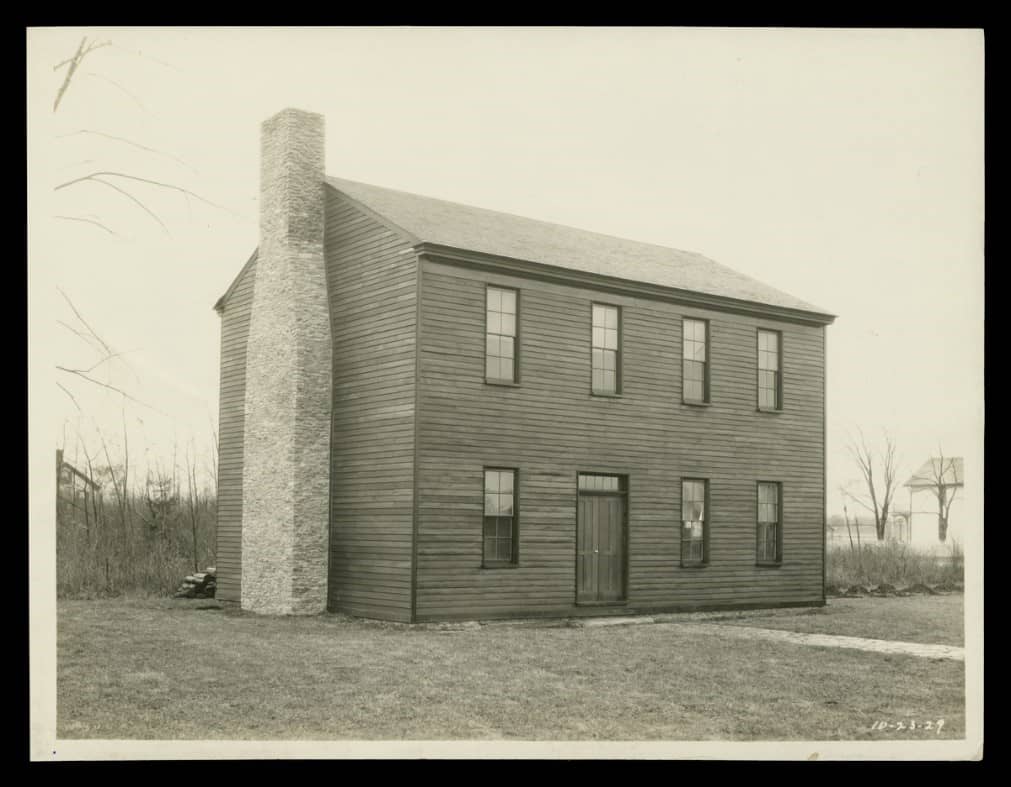 The completed Logan County Courthouse in Greenfield Village as it appeared for the October 21 dedication. 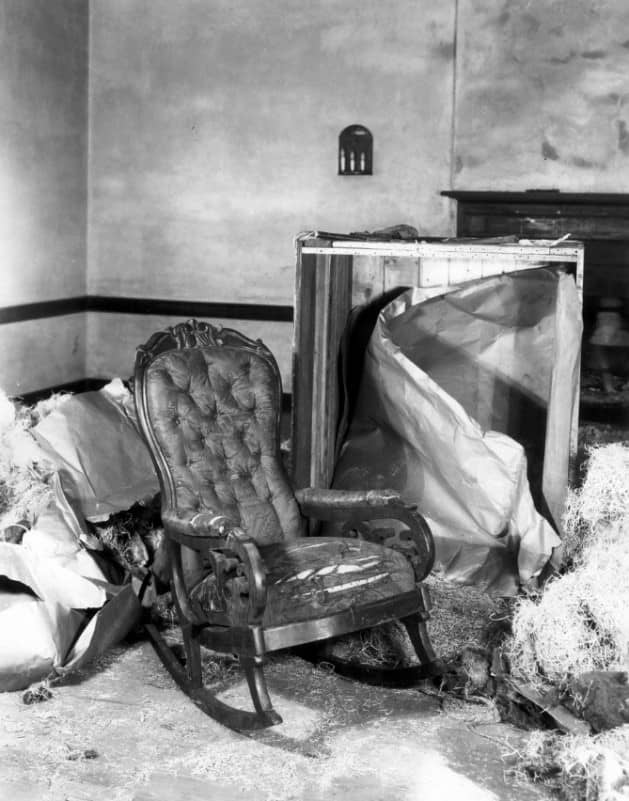 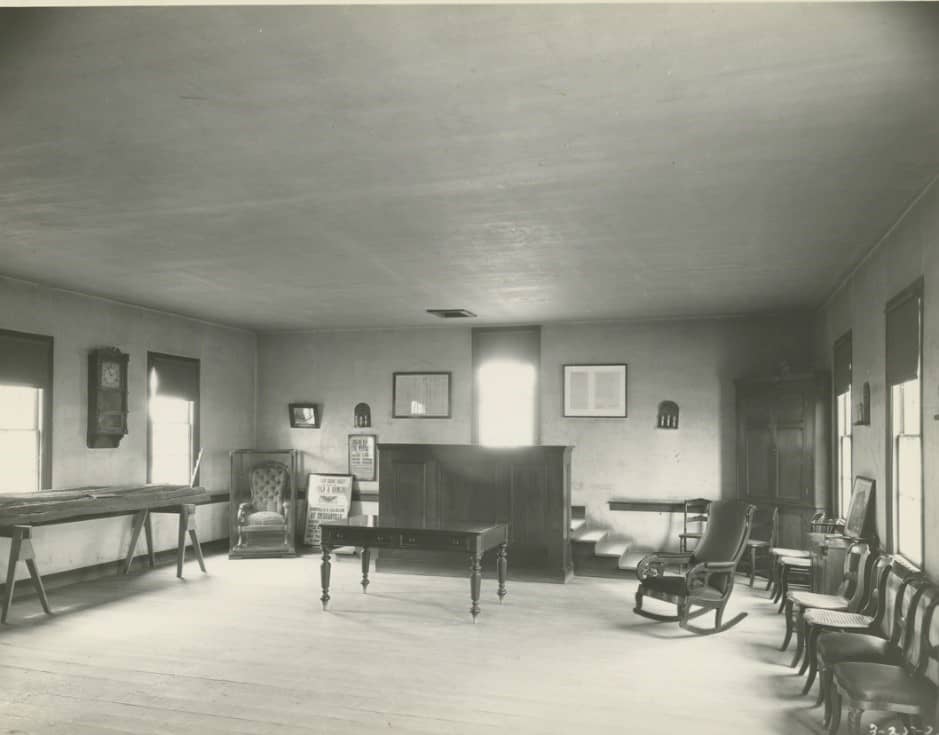 The interior of the completed Logan County Courthouse c.1935. It featured a display of Abraham Lincoln associated objects including Springfield furniture and the rocking chair from Ford’s Theater.

From 1929 until the mid-1980s, the building was left almost untouched as a shrine to Abraham Lincoln.

It was not until the mid-1980s that the research material was re-examined, primarily for preparations for much needed repairs to the now 50 plus year old restoration. In 1980, prior to the restoration work, the Lincoln assassination rocking chair was removed from the courthouse and placed in Henry Ford Museum. In 1984, the building underwent a significant restoration and was re-sided, the first- floor flooring was repaired, and extensive plaster repair and refinishing took place. In addition, a furnace was added (inside the judge’s bench), to provide adequate heat.

The interpretation of the building also was redefined and was re-focused away from the Abraham Lincoln shrine and more toward the stories of the history of our legal system and the civic lives of Americans in the 1840s. Gradually, many of the Lincoln artifacts were removed to appropriate climate controlled storage or display in Henry Ford Museum.

That brings us to the Greenfield Village opening of 2017. The Logan County Courthouse has now stood as long in Greenfield Village as it did in Postville, 88 years. It has had an interesting and storied history in both locations. Both the curatorial team, and the Greenfield Village programs team are excited to continue the process of ongoing research and improving the scholarship of the stories we tell there. We are working on some projects to accomplish just that for the near future and are looking forward to sharing all the details.

Jim Johnson is Director of Greenfield Village at The Henry Ford.