Three Trips to Tuskegee with the Fords and the Fair Lane 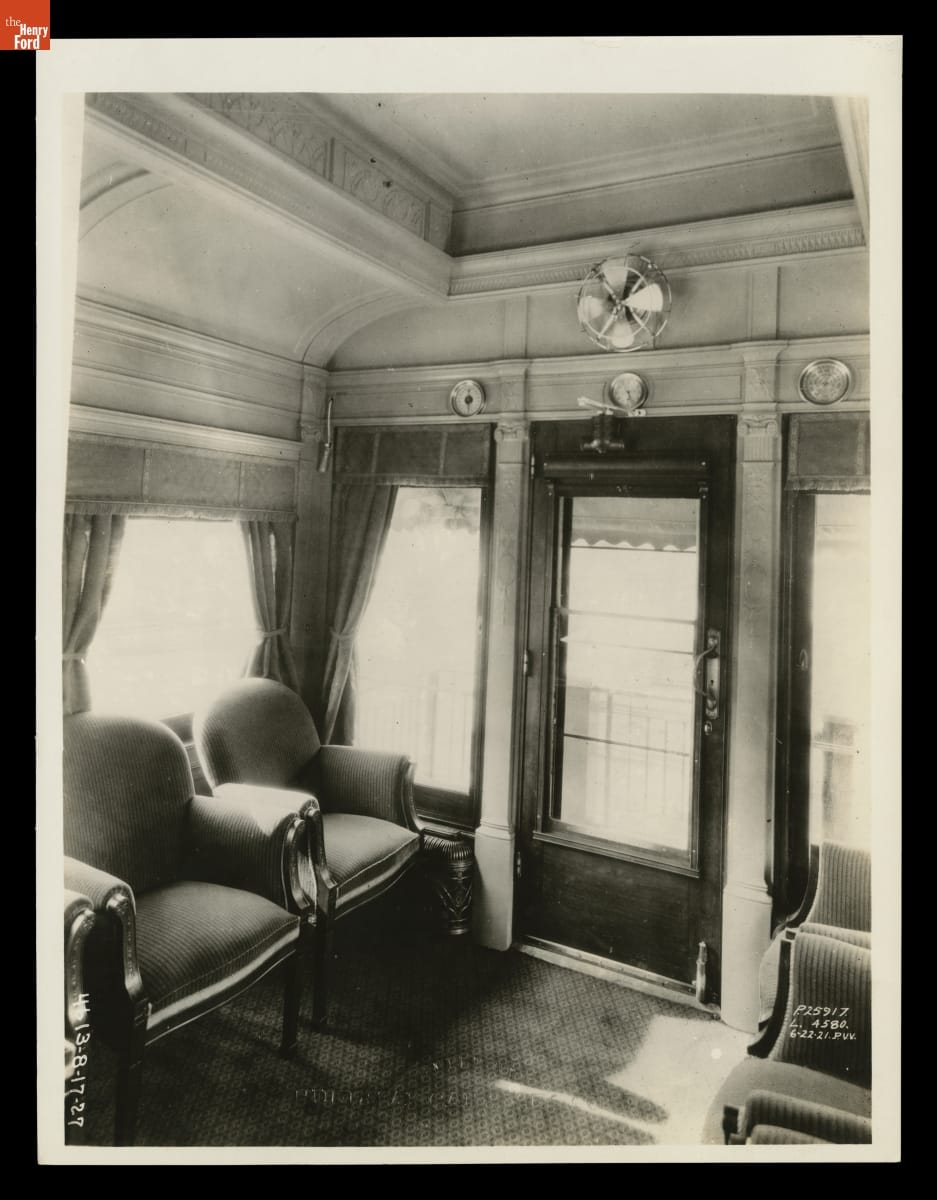 Beginning in 1921, Henry and Clara Ford used their own railroad car, the Fair Lane, to travel in privacy. Clara Ford designed the interior in consultation with Sidney Houghton, an interior designer based in London. The interior guaranteed a comfortable trip for the Fords, their family, and others who accompanied them on more than 400 trips between 1921 and 1942.

The view out the railcar windows often featured the landscape between Dearborn, Michigan, and Richmond Hill, Georgia, located near Savannah. The Fords purchased more than 85,000 acres in the area, starting in 1925, remaking it into their southern retreat.

On at least three occasions, Henry Ford might have looked out that Fair Lane window, observing changes in the landscape between Richmond Hill and a siding (or short track near the main railroad tracks, where engines and cars can be parked when not in use) near Tuskegee, Alabama. Henry Ford took the railcar to the Tuskegee Institute in 1938, 1941, and 1942, and Clara accompanied Henry at least twice. 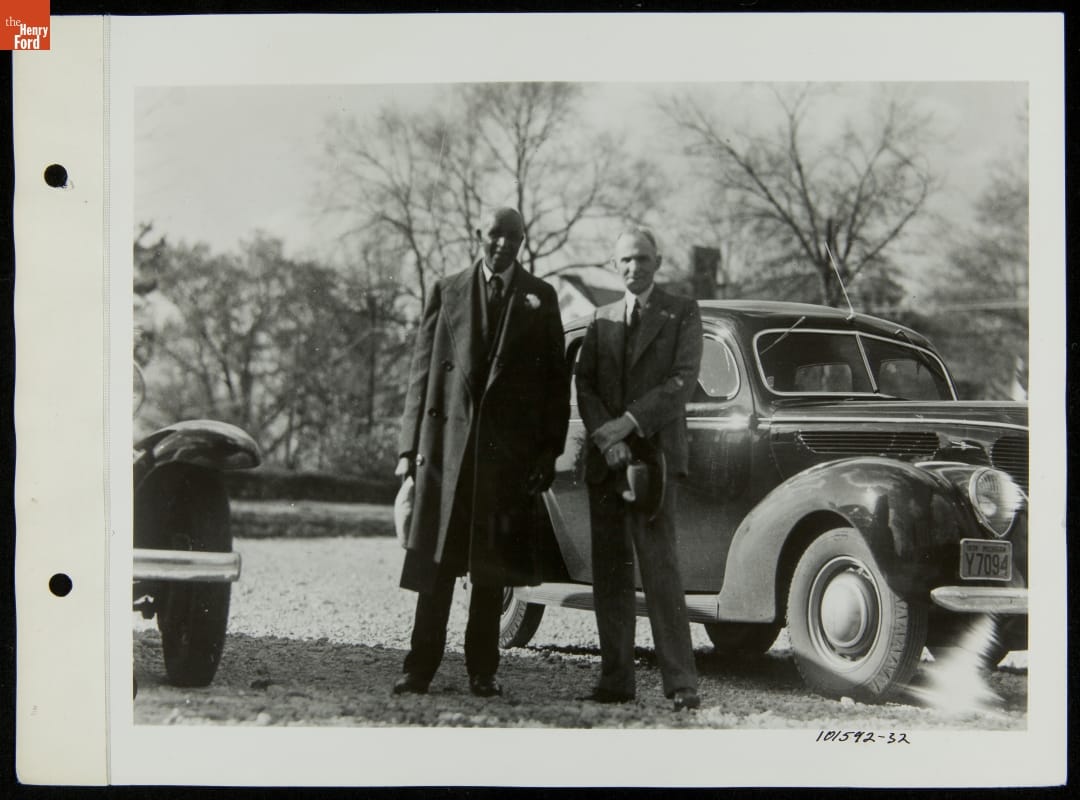 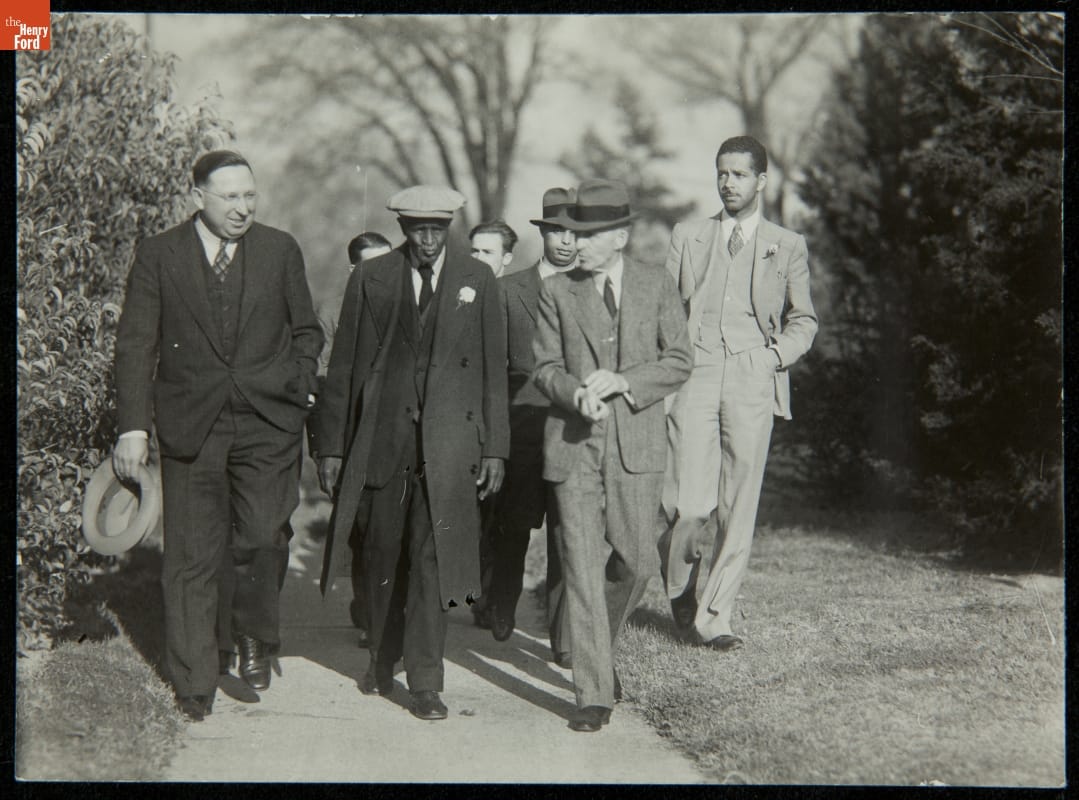 Photographs show these men viewing exhibits in the Carver Museum, installed at the time on the third floor of the library building on the Tuskegee campus (though it would soon move). 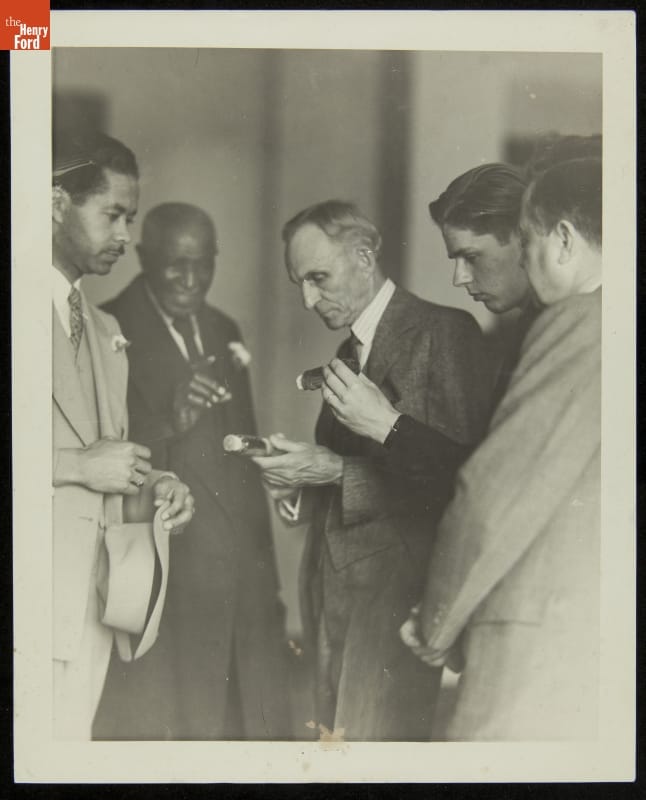 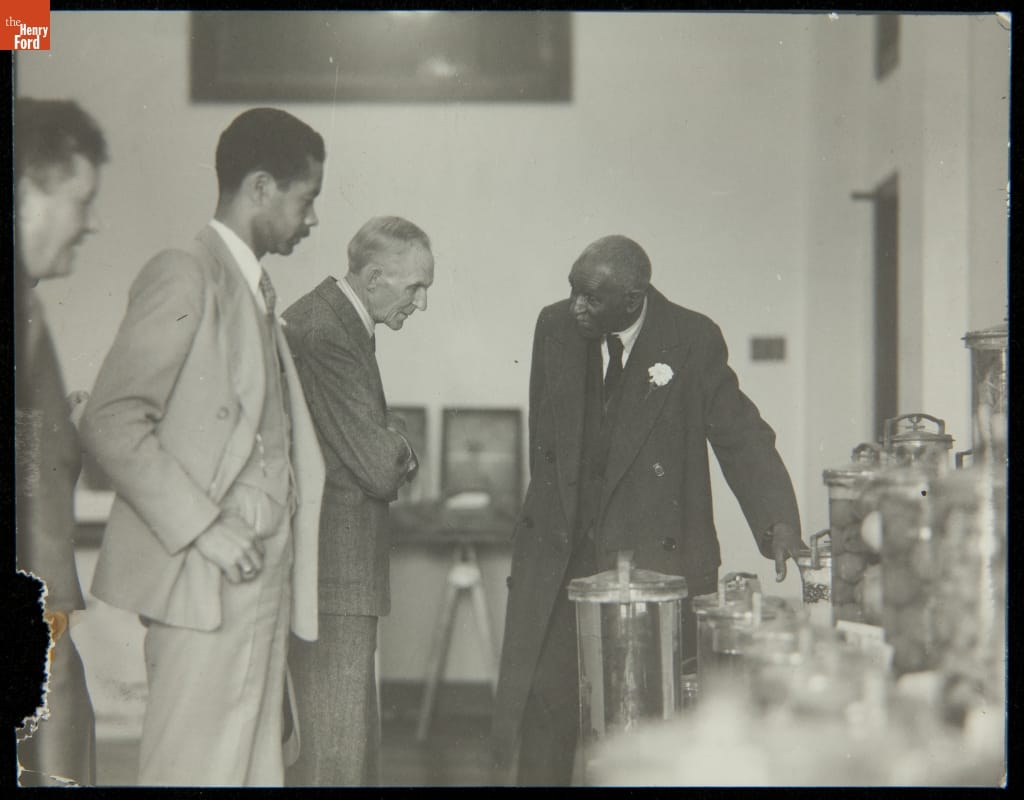 Clara accompanied Henry on her first trip to Tuskegee Institute, in the comfort of the Fair Lane, in March 1941. Tuskegee president F.D. Patterson met them at the railway siding in Chehaw, Alabama, and drove them to Tuskegee. While Henry visited with Carver, Clara received a tour of the girls’ industrial building and the home economics department.

During this visit, the Fords helped dedicate the George W. Carver Museum, which had moved to a new space on campus. The relocated museum and the Carver laboratory both occupied the rehabilitated Laundry Building, next to Dorothy Hall, where Carver lived. A bust of Carver—sculpted by Steffen Thomas, installed on a pink marble slab, and dedicated in June 1937—stood outside this building.

The dedication included a ceremony that featured Clara and Henry Ford inscribing their names into a block of concrete seeded with plastic car parts. The Chicago Defender, one of the nation’s most influential Black newspapers, reported on the visit in its March 22, 1941, issue. That story itemized the car parts, all made from soybeans and soy fiber, that were incorporated—including a glove compartment door, distributor cap, gearshift knob, and horn button. These items symbolized an interest shared between Carver and Ford: seeking new uses for agricultural commodities. 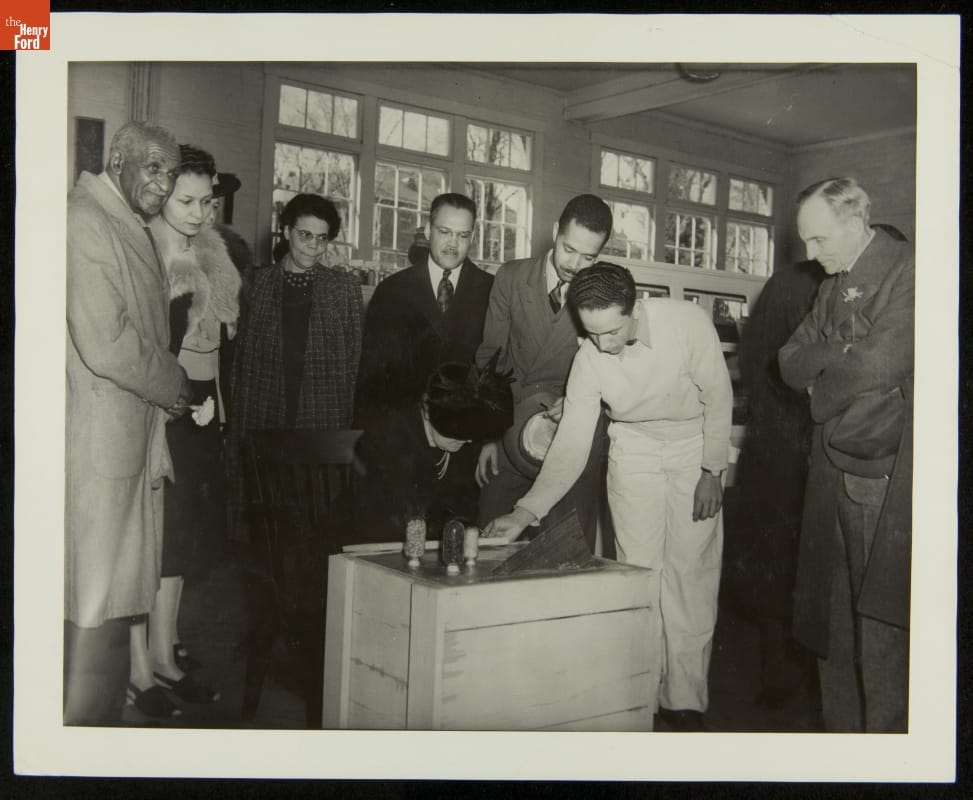 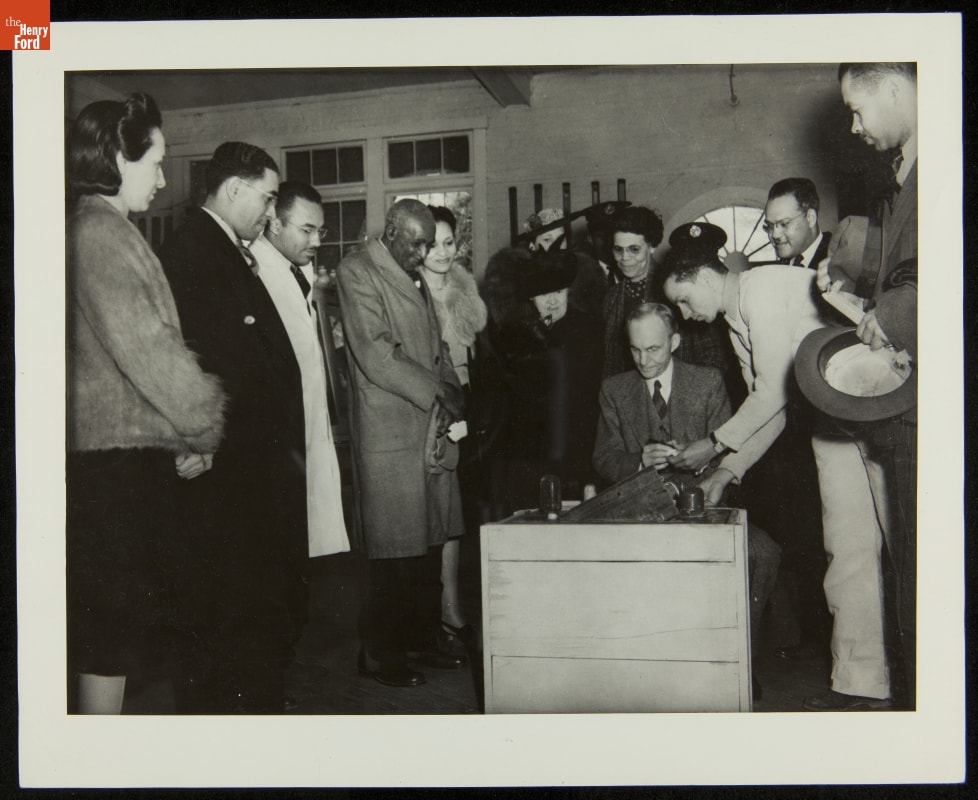 Henry Ford inscribing his name in a block of cement during the dedication of George Washington Carver Museum, Tuskegee Institute, March 1941 / THF213790

After the dedication, the Fords ate lunch in the dining room at Dorothy Hall, the building where Carver had his apartment, and toured the veterans’ hospital. They then returned to the Fair Lane railcar and headed for the main rail line in Atlanta for the rest of their journey north.

President Patterson directed a thank you letter to Henry Ford, dated March 14, 1941. In this letter, he commended Clara Ford for her “graciousness” and “her genuine interest in arts and crafts for women, particularly the weaving, [which] was a source of great encouragement to the members of that department.”

The last visit the Fords made to Tuskegee occurred in March 1942. The Fair Lane switched off at Chehaw, where Austin W. Curtis, Jr., met the Fords and drove them to Tuskegee via the grounds of the U.S. Veterans’ Hospital. Catherine Patterson and Clara Ford toured the Home Economics building and the work rooms where faculty taught women’s industries. Clara rode in the elevator that Henry had funded and had installed in Dorothy Hall in 1941, at a cost of $1,542.73, to ease Carver’s climb up the stairs to his apartment.

The Fords dined on a special luncheon menu featuring sandwiches with wild vegetable filling, prepared from one of Carver’s recipes. They topped the meal off with a layer cake made from powdered sweet potato, pecans, and peanuts that Carver prepared.

Tuskegee shared the Fords’ itinerary with Black newspapers, and the April 20, 1942, issue of Atlanta Daily World carried the news, “Carver Serves Ford New Food Products.” They concluded, in the tradition of social columns at the time, by describing what Henry and Clara Ford wore during the visit. “Mrs. Ford wore a black dress, black hat and gloves and a red cape with self-embroidery. Mr. Ford wore as usual an inconspicuously tailored business suit.”

Dr. Patterson wrote to Henry Ford on March 23, 1942, extending his regrets for not being at Tuskegee to greet the Fords. Patterson also reiterated thanks for “Mrs. Ford’s interest in Tuskegee Institute”—“The people in the School of Home Economics are always delighted and greatly encouraged with the interest she takes in the weaving and self-help project in the department.”

The Fords sold the Fair Lane in 1942. After many more miles on the rails with new owners over the next few decades, the Fair Lane came home to The Henry Ford. Extensive restoration returned its appearance to that envisioned by Clara Ford and implemented to ensure comfort for Henry and Clara and their traveling companions. Now the view from those windows features other artifacts on the floor of the Henry Ford Museum of American Innovation, in place of the varied landscapes, including those around the Tuskegee Institute, traveled by the Fords. 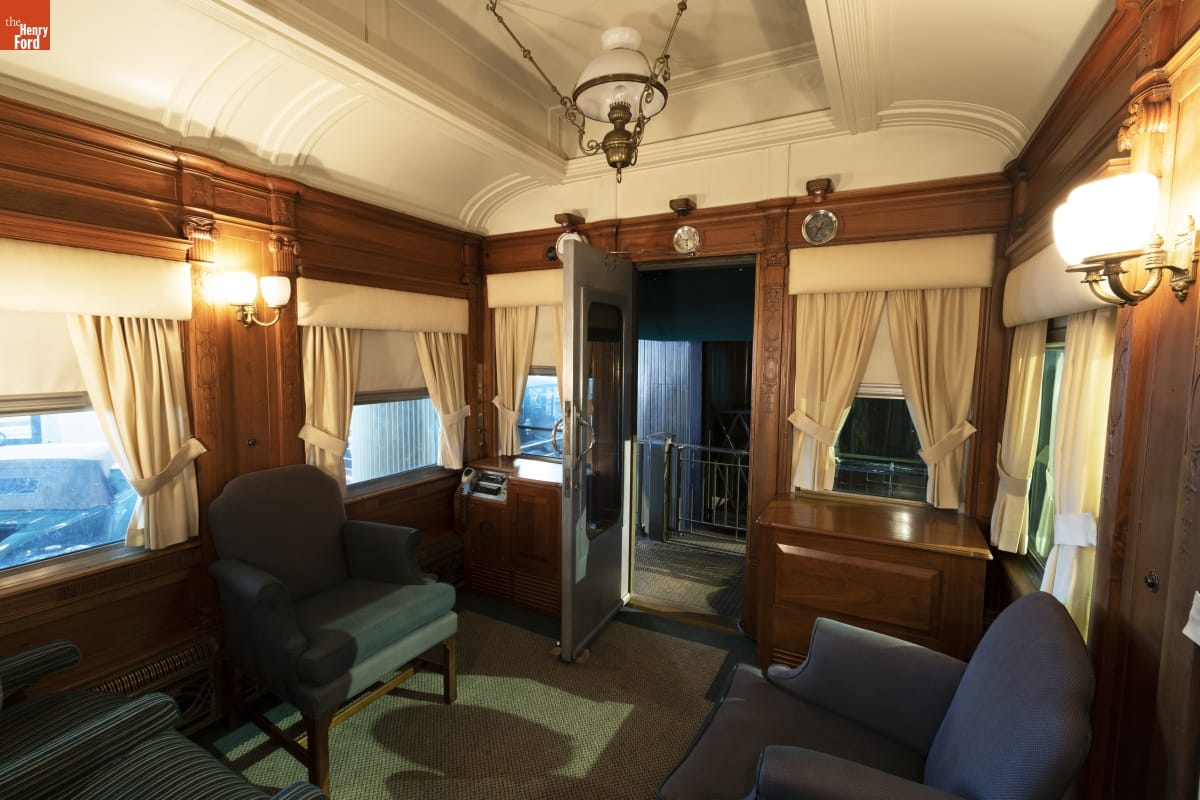 A view of the interior of Henry and Clara Ford’s private railroad car, the “Fair Lane,” constructed by the Pullman Company in 1921, restored by The Henry Ford to that era of elegance, and displayed in Henry Ford Museum of American Innovation. / THF186264