Imagine attending a choral concert in a century-old church. Instead of monochromatic robes, the choristers emerge in bright, radiant color with bold geometric design. The colors of the robes are a musical key, made visual—yellow for the soprano, orange for the contralto, red for the tenor, and purple for the bass. As the choristers sing and sway, the robes come alive, a modern counterpoint to the traditional church interior.

Imagination aside, this is a scene familiar to those who have watched the Hope College Chapel Choir perform. Originally a creation of Charles and Ray Eames from the 1950s, faithful replicas of the robes continue to be used. 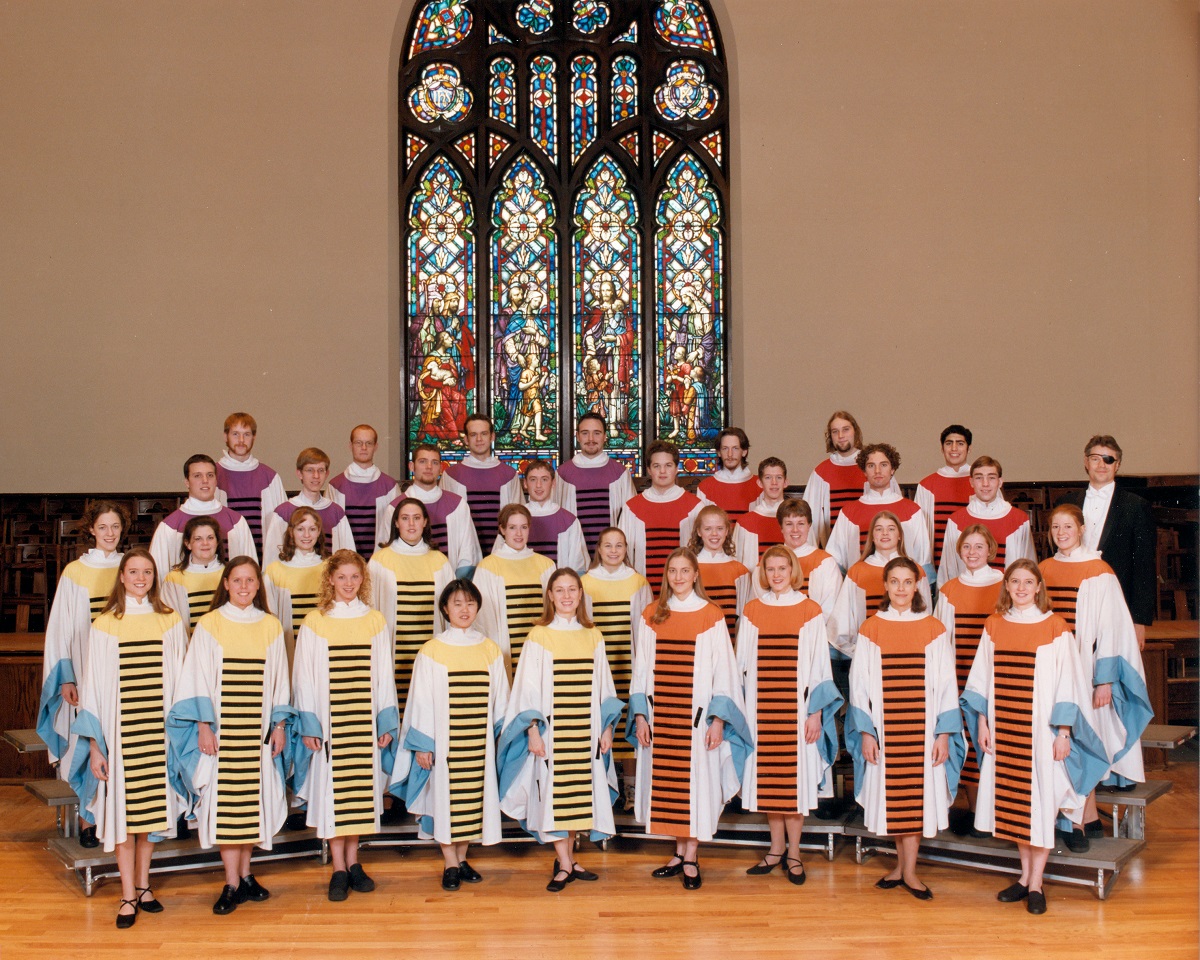 The Hope College Chapel Choir at Dimnent Chapel, circa 2001. Photo Courtesy of the Joint Archives of Holland.

Although husband-and-wife design team Charles and Ray Eames collaborated in nearly everything, it was Ray who showed an early and enduring interest in textiles and fashion design. The daughter of a theatre aficionado and manager, she attended the Bennett School for Girls, a two-year college in Millbrook, New York, earning a degree in Fashion Design in 1933. She completed fashion sketches throughout her life—even creating original paper dolls with custom clothing, complete with the tabs used to affix the clothing onto the doll! She designed a few textiles (one of which—“Crosspatch”—won an honorable mention in a 1946 Museum of Modern Art competition) and dedicated significant energy into the design and creation of her own clothing. The clothes she designed for herself and for Charles are quintessential Eames—functional yet beautiful, with playful delights to be found in the details.

D.J. De Pree, the founder and president of the Herman Miller Furniture Company (which produced Charles and Ray Eames’ furniture), was known for his religious fervor. Further, the company is headquartered in Zeeland, Michigan, a Dutch-American enclave with deep Protestant Christian roots. So, when an employee suggested the creation of a company-sponsored chorus in 1952 (something that might otherwise have been an unusual corporate activity), the De Prees granted it legitimacy, naming it the Herman Miller Mixed Chorus and inviting the chorus to perform at company and company-sponsored events. They soon required choral robes to outfit the company chorus and asked Charles and Ray Eames to design them. 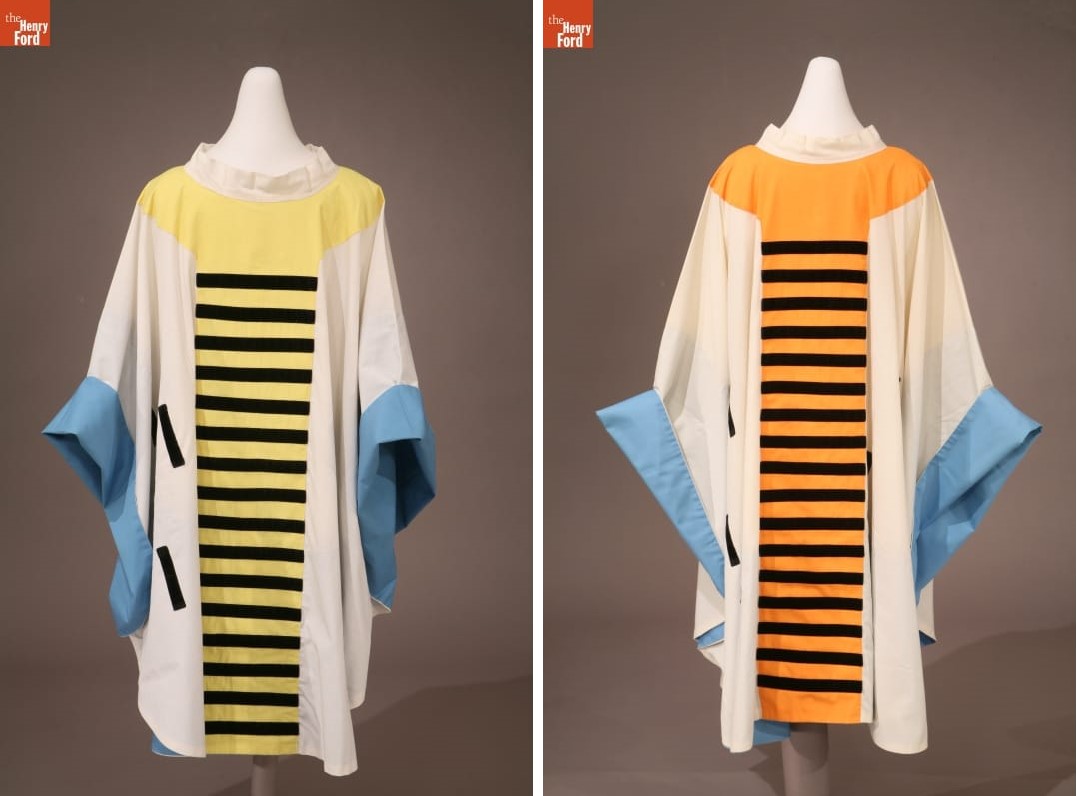 With Ray’s background, it is likely that she was primarily responsible for the design, although as always in collaboration with her husband. The robes are bold and colorful and make a statement, but they are also functional. Their symbolism is evidence of the Eames’ signature research-heavy process and attention to detail. The colors of the robes identify the vocal type (soprano, alto, tenor, bass) and each color’s hue (from light to dark) corresponds with the vocal range (from high to low). The horizontal black lines at the center of each robe reference the musical staff. Charles and Ray may have scoured the extensive Eames Office reference library to ensure symbolic depth and accuracy. Or, perhaps, this came from an ingrained knowledge of music. They enjoyed a variety of musical types, like jazz, folk, and classical, and music was a major component of the films they produced throughout their life, often collaborating with talented composers like Elmer Bernstein. The theatrical backdrop of Ray’s childhood, her interest in textiles and fashion, and the Eames’ interest in music coalesce in these robes. 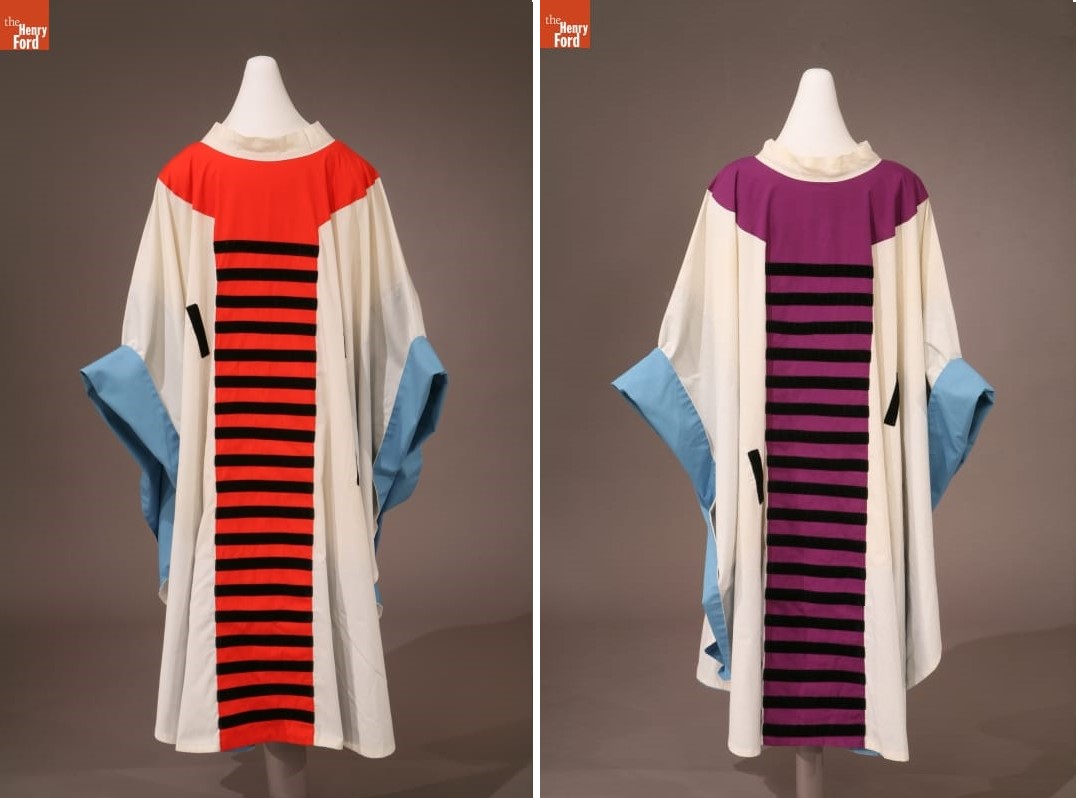 The robes were designed at the Eames Office in Los Angeles, but it is unknown whether the robes were created there and shipped, finished, to Zeeland, or if the patterns and fabric were shipped and the robes were then sewn locally.

By 1960, the Herman Miller Mixed Chorus was disbanded, and Hugh De Pree, son of D.J. De Pree, donated the robes to the Hope College Chapel Choir in the neighboring city of Holland, Michigan, where the family had deep connections. The Hope College Chapel Choir was larger than the Herman Miller Mixed Chorus, so more robes had to be made. Doris Schrotenboer and Millie Grinwis, a mother and daughter team from Zeeland, made the extra. Millie Grinwis recalls that the fabric and patterns were shipped from the Eames Office to her mother’s home, where they were painstakingly put together.

After over 44 years in use, the original robes were retired in 2004. Unwilling, however, to part with the signature design, Hope College commissioned replicas, albeit in a slightly lighter fabric. The original robes were donated to several institutions. At The Henry Ford, these robes add an extra dimension to our design collections, as well as another way to better understand the many talents of Charles and Ray Eames. 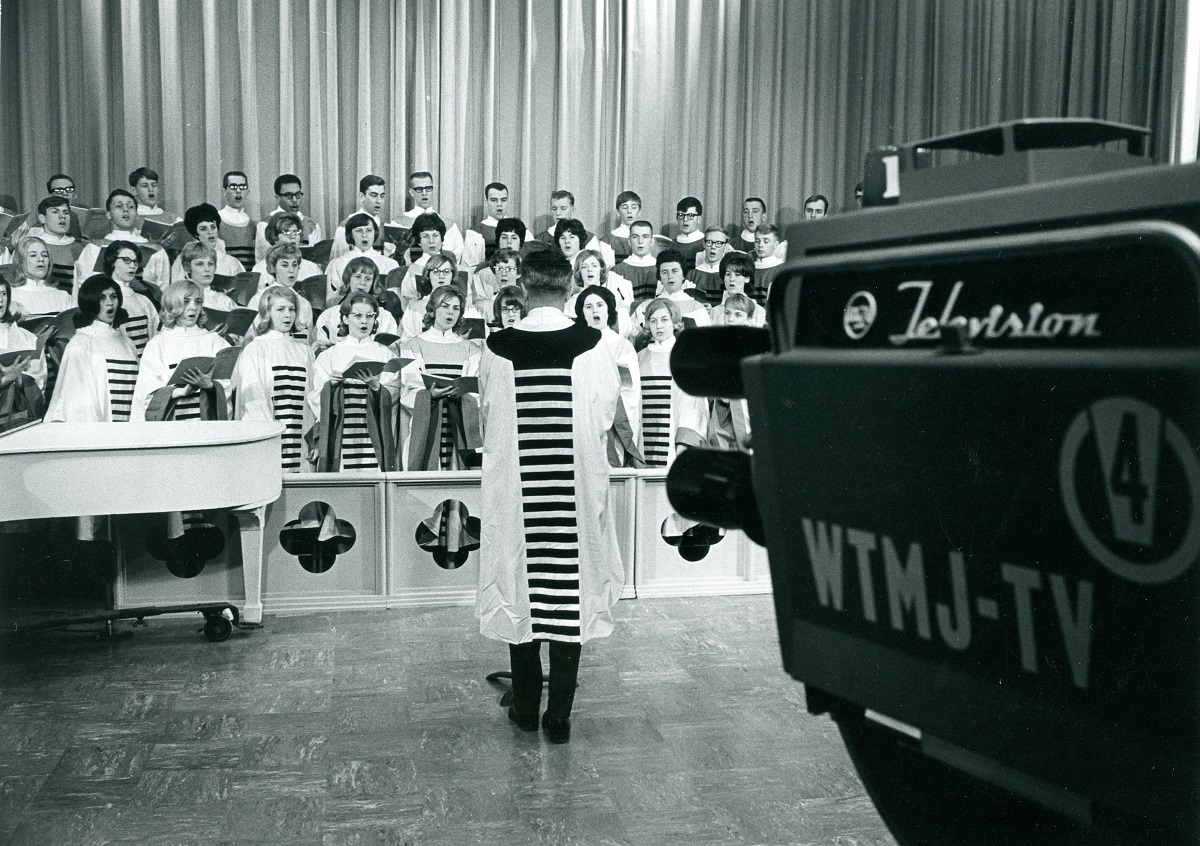 The Hope College Chapel Choir recording at Milwaukee’s WTMJ-TV, circa 1965. / Photo Courtesy of the Joint Archives of Holland.


Katherine White is Associate Curator, Digital Content, at The Henry Ford. She is also an alumnus of Hope College, where she was first delighted by these robes! Thank you to Geoffrey Reynolds at the Joint Archives of Holland for graciously sharing pictures of the Hope College Chapel Choir through the years.