The Henry Ford acquired the Vegetable Building from Detroit's Central Farmers Market in 2003, saving it from demolition. Like the farmers markets of today, the Detroit Central Farmers Market was a gathering place – a commercial center, a hub of entrepreneurship and a community space where family, friends, and neighbors congregated and socialized.

This farmers market can become a destination again, a resource for exploring America's agricultural past, present, and future. We need your help to make this happen. #PledgeYourPassion by making a gift this Giving Tuesday. 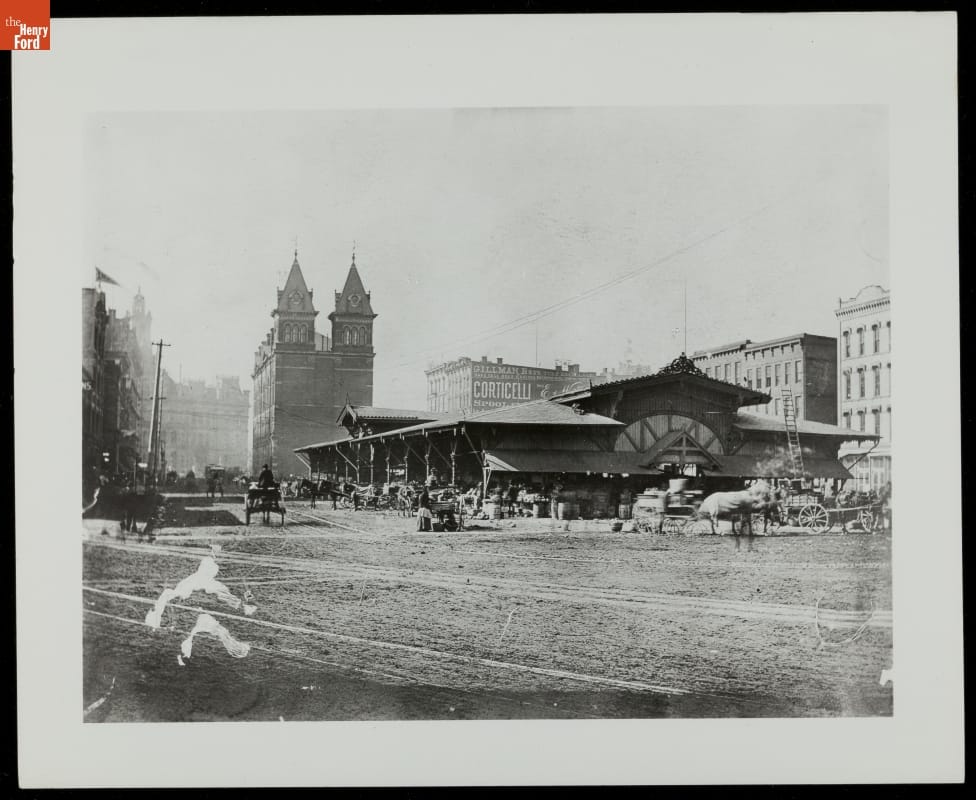 Learn more about the remarkable history of this important structure.

The City of Detroit invested in a new permanent market building - this expansive vegetable hall - in 1860. Located at the east end of Michigan Avenue, just east of Woodward at Campus Martius, it was roughly four blocks square, extending from Woodward to Randolph. The major building in the market was the expansive vegetable building. Market gardeners, florists, orchardists, and nurserymen sold their produce from rented stalls between 1861 and 1893.

The growth of Central Market reflects Detroit’s growth as a city. Much of Detroit’s early history revolved around its importance as a port and strategic location in the Great Lakes. During the 19th century, Detroit’s manufacturing base and its population grew rapidly, more than doubling every 10 years from just 2,222 people in 1830 to 45,619 in 1860. The Central Market was the first Detroit market not located by the docks, reflecting the city’s transition from a port town to a city. Farmers were now coming to Detroit to sell to city residents, rather than to ship produce to eastern cities. 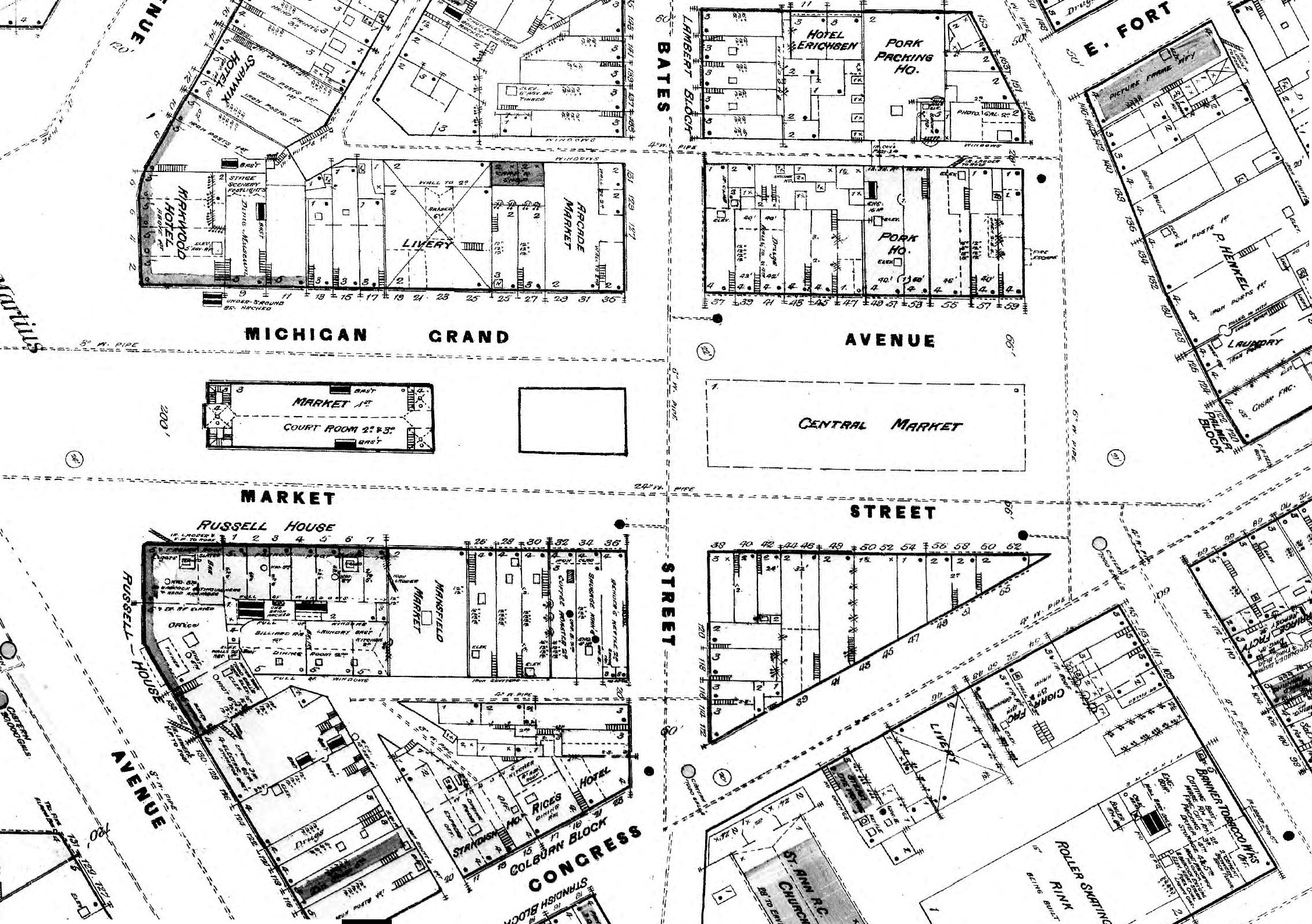 This certified 1884 Sanborn insurance map shows the Central Market area, including the Vegetable Building and other shops.

The Central Farmers Market began in 1843 as a simple shed built off the rear of the old City Hall building. Problems with traffic congestion caused by the market, along with the desire to make the prominent square more presentable, led newly elected Mayor Christian H. Buhl to pledge to build a new covered market building. The city hired local architect John Schaffer to develop plans. Schaffer’s design called for a “structure to be comprised of forty-eight iron columns supporting a wooden roof, [measuring] 70 by 242 feet from outside to outside.” The construction contract was awarded in June to Joel Gray at a cost of $5,312. In late September of 1860, the Detroit Free Press wrote:

“The new market building in the rear of the City Hall is nearly competed and promises to be a fine structure. It covers the whole of the space occupied as a vegetable market, and consists of an open shed, the roof of which is supported on iron columns and a well-finished framework. The roof is of slate and cost about $1,500. It is designed in time to make a tile floor and erect fountains. The building will accommodate all the business of the market and will constitute an ornament as well as a great convenience to that important branch of city commerce.” 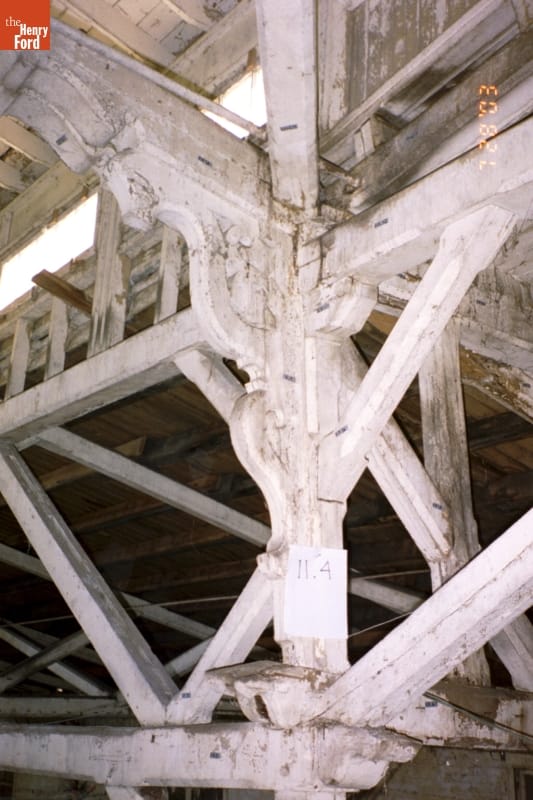 In its first year, the market earned the city $1,127 in rent, covering 20% of the construction costs in one year. The building thrived as the vegetable market through the 1880s. The emergence of the Eastern Market, and the continuing desire to open the street to traffic, led the Common Council to decide to close the Central Market in 1892. In 1893 the Parks and Boulevards Commission, which operated Belle Isle, received approval to move the building to Belle Isle for use as a horse and vehicle shelter. The building was re-erected on Belle Isle in 1894.

In later years it was converted to a riding stable – the sides were bricked in, the roof was altered to add clerestory windows to let in light, and an office and wash area was constructed in the south end. After the riding stable closed in 1963, the building was used to keep the horses of the Detroit Mounted Police, and then later used for storage. It was considered for demolition since the early 1970s. Over the summer of 2003, the building was dismantled and the parts from the original market building were preserved for re-erection in Greenfield Village. 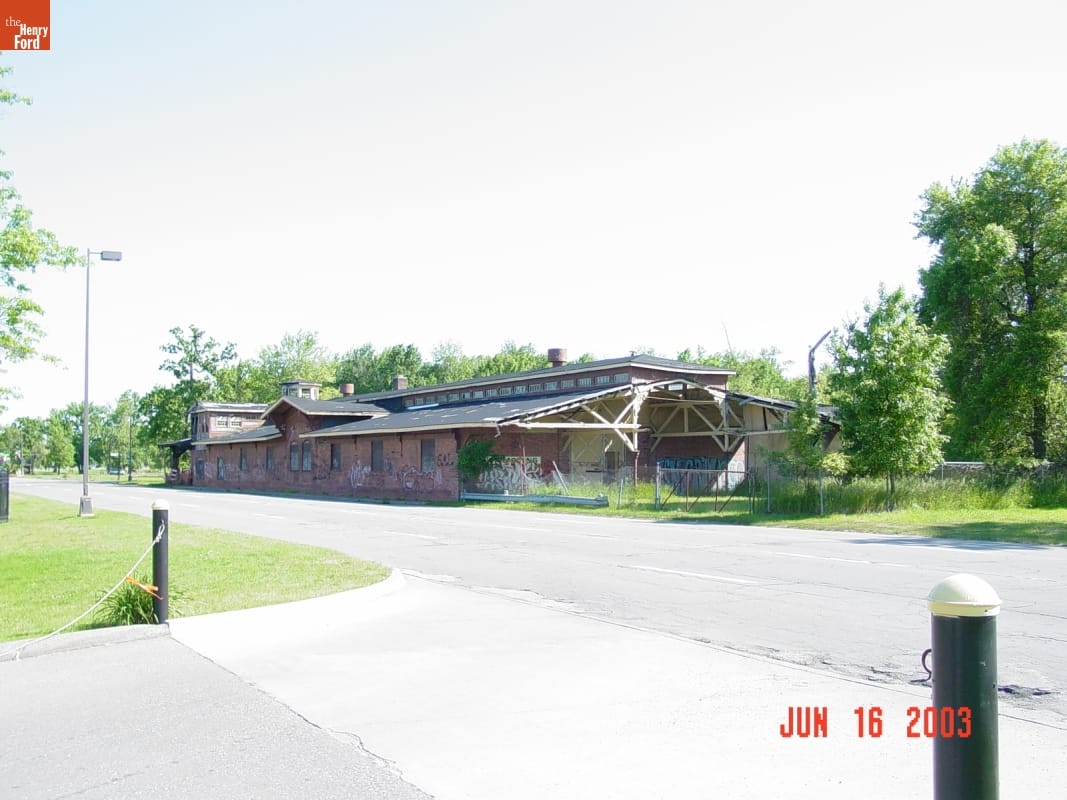 After the market building was moved to Belle Isle, it was converted to a riding stable. It had been vacant for more than 20 years at the time of this photo. THF113549

The Detroit Central Farmers Market vegetable building is a rare and important building. Because of fires and development pressures, wooden commercial buildings, particularly timber-framed buildings, rarely survive to the present in urban settings. This may be the only 19th century timber-frame market building surviving in the United States. Its move to Belle Isle saved it from demolition. 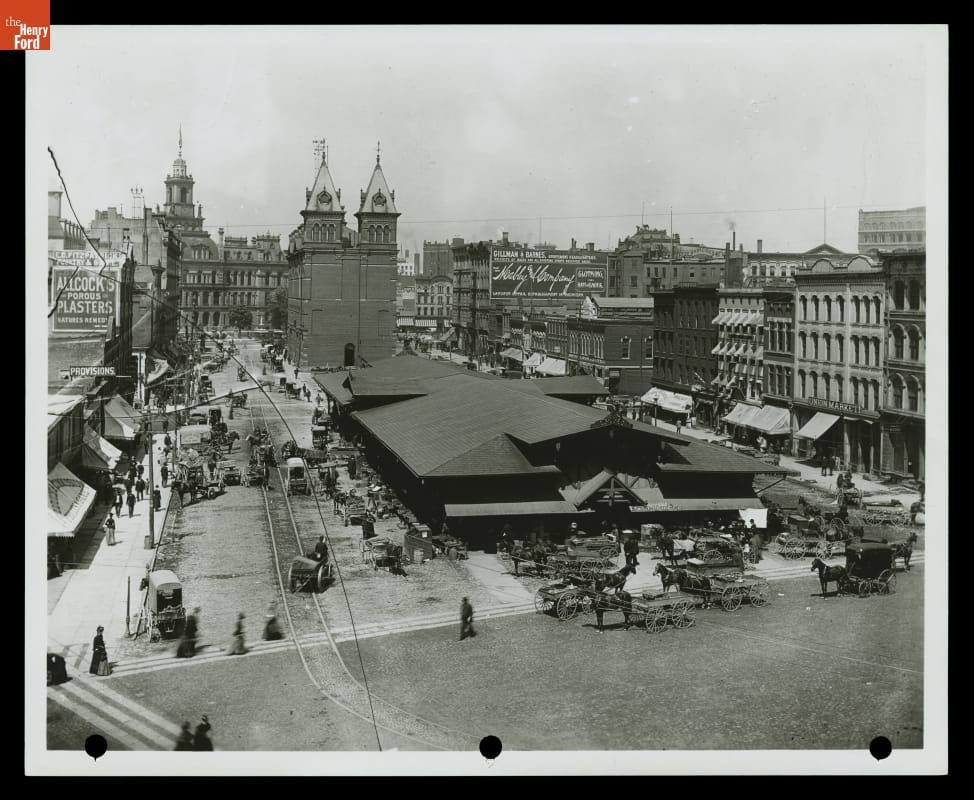 The building is architecturally significant. It is an excellent expression of prevailing architectural tastes, as demonstrated by the Free Press review. It captures the rapidly changing world of building construction of the mid-19th century. The building represents the pinnacle of the timber framer’s craft; it is elegantly shaped and ornamented in a way that makes the frame itself the visual keystone of the design. It was built shortly before timber frame construction was eclipsed by the new balloon frame construction, which used dimensional lumber and nailed joints. The cast iron columns that support the timber-framed roof represent the newest in manufactured construction materials. Cast iron was the favorite material of the modern builder in the mid-19th century. It was easy to form into a variety of shapes, and ideal for adding ornamentation to buildings at a moderate cost. The columns in the market building have been formed to represent two different materials – the lower section resembles an elaborately carved stone column, while the upper section looks like the timber frame structure that it supports. 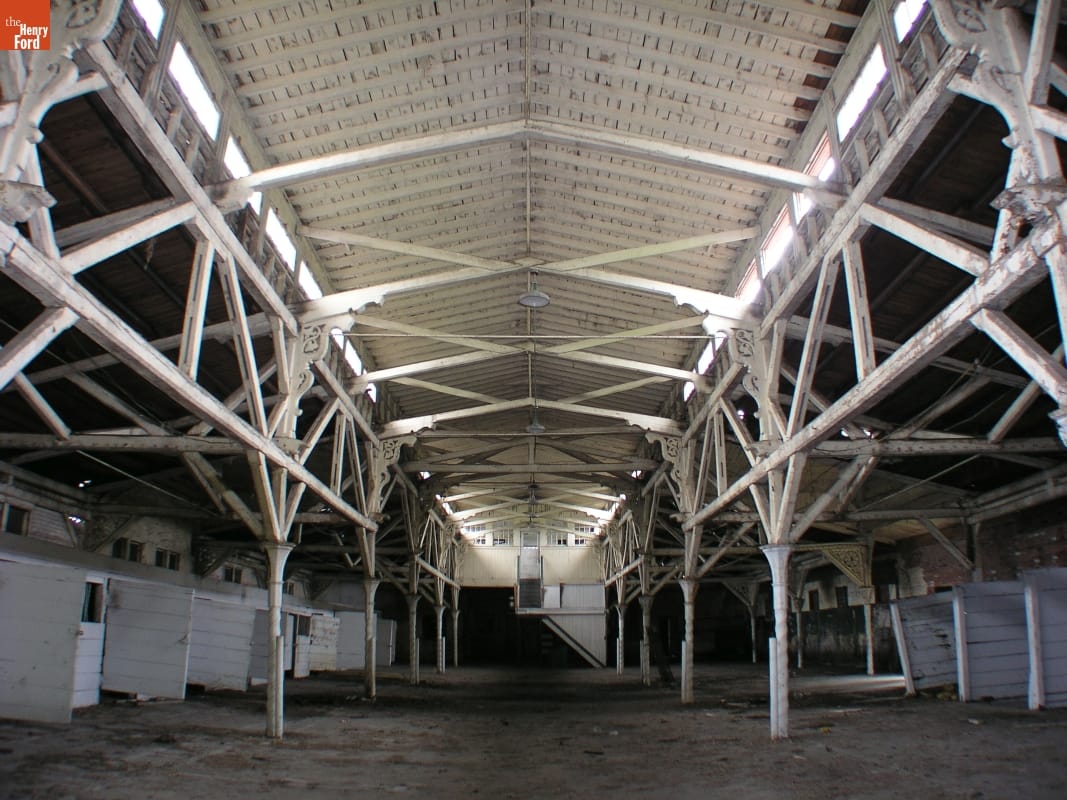 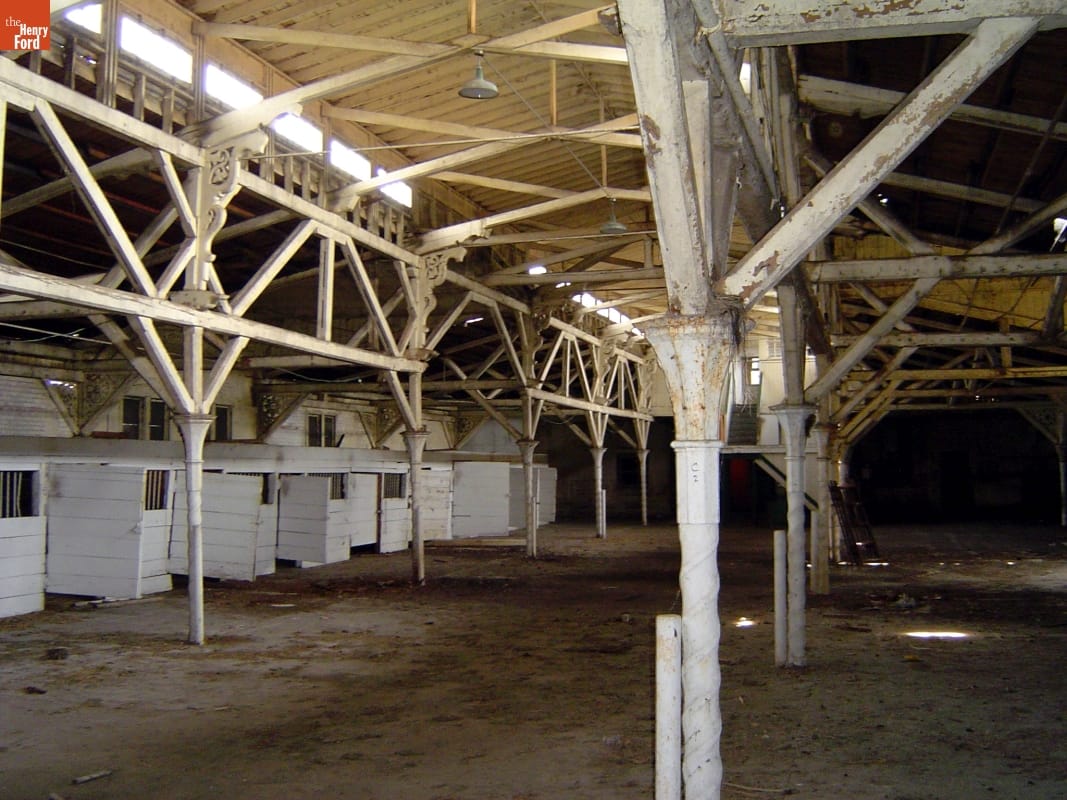 The cast-iron columns were made to resemble stone below the capital and wood above the capital. THF113505

The building captures the exuberance and optimism of the city of Detroit as it grew in its first wave from a frontier fort and outpost, to an important city. A “useful and beautiful” market building in the city’s central square was important to this image of this growing city – as evidenced by the fact that it took only nine months from Mayor Buhl’s inaugural address of January 11, 1860 promising a new market building, to its substantial completion. Few buildings survive from this first era of growth in the city of Detroit.

For 30 years customers engaged with vendors at the Vegetable Building in Detroit's Central Market. For 110 years the building served the public in a variety of ways on Belle Isle. Your donation will help The Henry Ford rebuild this structure in the heart of Greenfield Village. There it will inspire future generations to learn about their food sources. Make history and #PledgeYourPassion this Giving Tuesday.

Jim McCabe is former Collections Manager at The Henry Ford.