Panoramic view of the reconstructed vegetable shed from Detroit Central Market on April 10, 2022. The entrance that originally faced south is front and center in this view. / Compiled from two photographs taken by Debra A. Reid

The vegetable shed from Detroit Central Market, opening this week in Greenfield Village, provides the perfect opportunity to be a building detective! You can practice your powers of observation as you explore this open-sided structure. In the process, you can become a more informed observer of the built environment around you.

The following highlights should whet your appetite to learn more about this “shed.” Originally, it sheltered vendors who helped feed hungry Detroiters for more than 30 years, from April 1861 to February 1894. Then it spent 110 years on the upper end of Belle Isle sheltering horses, operating as a public riding stable, and as a storage facility for the City of Detroit. The Henry Ford acquired it in 2003, saving it from demolition. Then, between 2003 and 2021, we conducted research and raised funds to reconstruct it in Greenfield Village. Now you can explore the reconstructed Detroit Central Market shed starting its new life in the heart of Greenfield Village.

Is This Building a Reconstruction?

Rudy Christian, a traditional timber-frame expert and principal of Christian & Son, Inc., describes the Detroit Central Market shed as a reconstruction. He bases this on his experiences dismantling the structure in 2003, advocating for use of original materials and prepping the timber-frame elements, and reassembling the roof system during reconstruction in Greenfield Village during 2021.

The Secretary of the U.S. Department of the Interior (DOI) first defined “reconstruction” in 1978 as “the act or process of reproducing by new construction the exact form and detail of a vanished building, structure, or object, or a part thereof, as it appeared at a specific period of time” (Federal Register, Vol. 43, No. 236, December 7, 1978, page 57251). You can read more about the DOI’s standards for the treatment of historic buildings and landscapes here, including more about reconstruction and the other three standards: preservation (when the property retains distinctive materials and thus conveys historic significance without extensive repair or replacement), restoration (removal of features to return a property to an appearance of a particular time in the past), and rehabilitation (retention of a property’s historic character, but modifications may occur given ongoing use).

What Percentage of the Building Is Original?

The Detroit Central Market vegetable shed, while “new construction,” is authentic because of the significant percentage of original material incorporated into the reconstruction. Fifty percent of the columns (16 of 32) are original. The 16 originals are distinctive because of acanthus-leaf details on the bases, a spiral design, and capitals onto which cast S-scroll leaf ornaments are mounted. 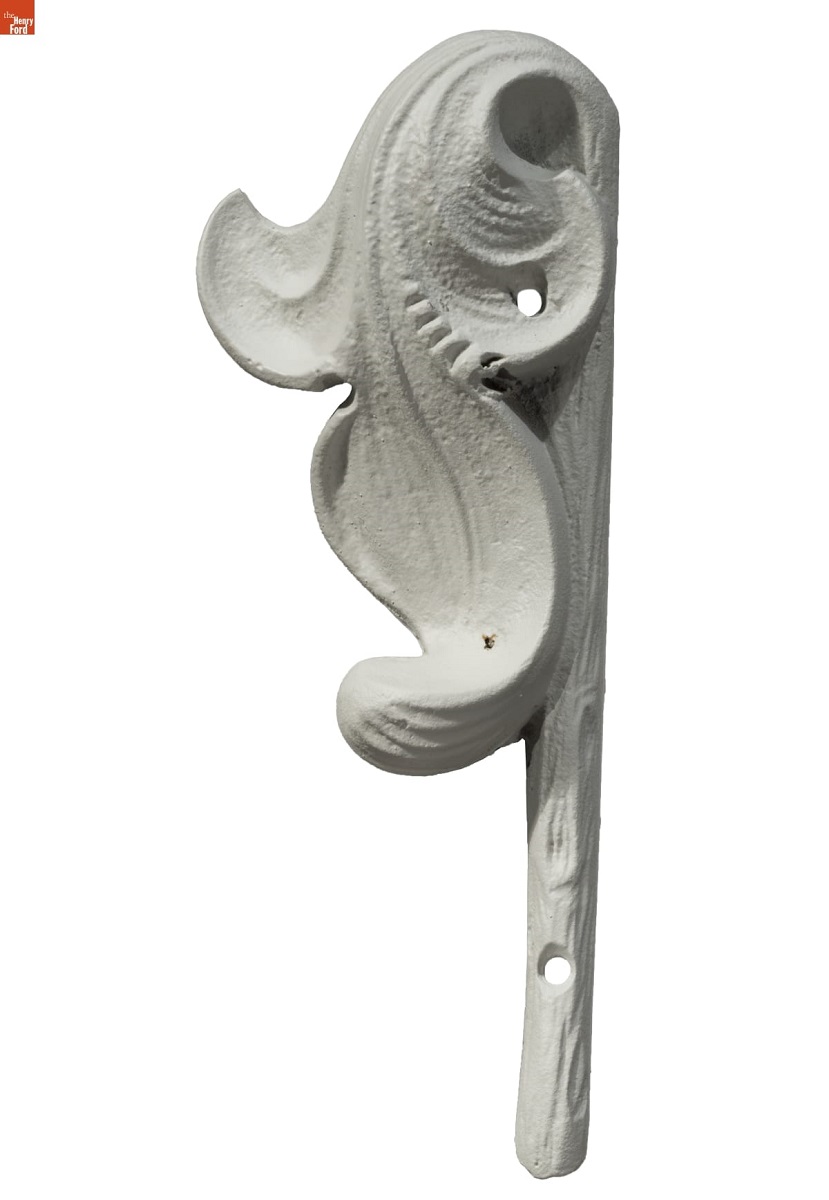 These original cast-iron columns, however, are brittle. It is impossible to calculate their tensile strength—that is, the maximum stress that the cast iron can stand when being stretched or pulled before breaking. Modern code requires structural materials to meet tensile-strength specifications. This posed a significant challenge.

How Can We Meet Modern Building Codes with an Historic Structure?

The facilities team at The Henry Ford contracted with O’Neal Construction, Inc., of Ann Arbor, Michigan, on the reconstruction of the Detroit Central Market building. They were involved in all phases of the planning process and oversaw reconstruction from 2021 to its completion. The team considered different options to support the building, but ultimately selected an innovative solution that exceeds code requirements. In effect, the solution involved flipping the structural support upside down. 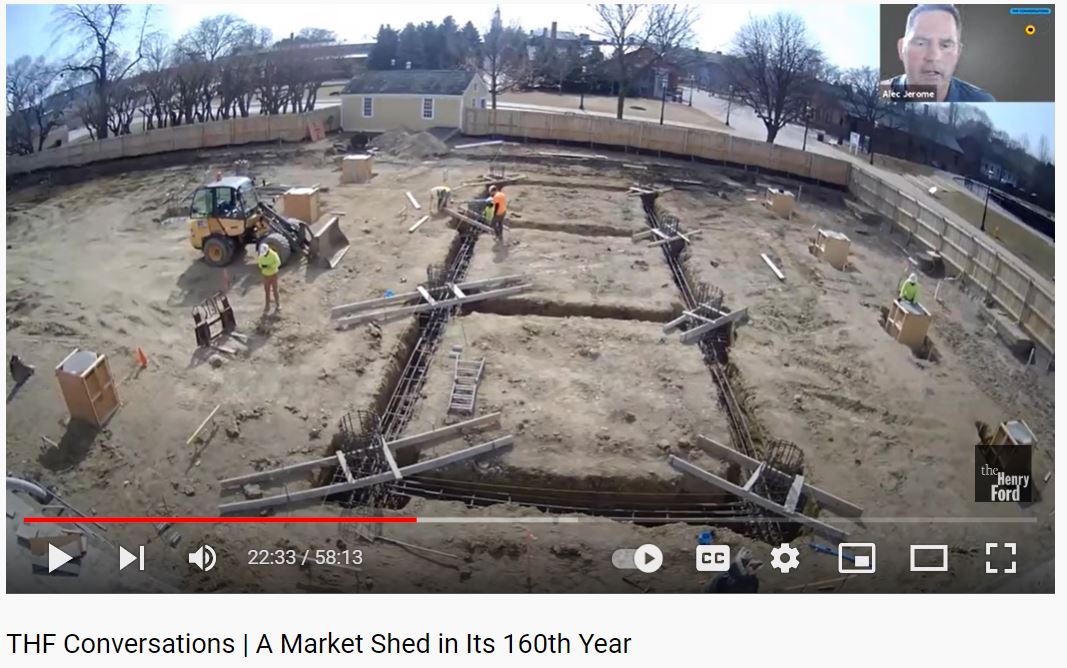 Alec Jerome, Director of Facilities at The Henry Ford, explaining the invisible framing system that anchors the vegetable shed on August 26, 2021. / Screenshot from THF Conversations: A Market Shed in its 160th Year

Ensuring guest safety required construction of an underground “moment frame” that anchors the structure and prevents it from acting like a huge umbrella on a windy day. The above screenshot shows the system of rebar that runs between the 48-inch-deep footers. The footers extend up to octagonal bases, or piers. These footers also accommodate modern infrastructure—specifically, electrical conduit that runs underground and up into the piers. All 32 columns are attached to the individual piers with anchor bolts, but 16 of the 32 columns are steel and specially designed extensions of the moment frame. As a whole, the moment frame ensures that the structure will remain on the ground and standing in perpetuity. 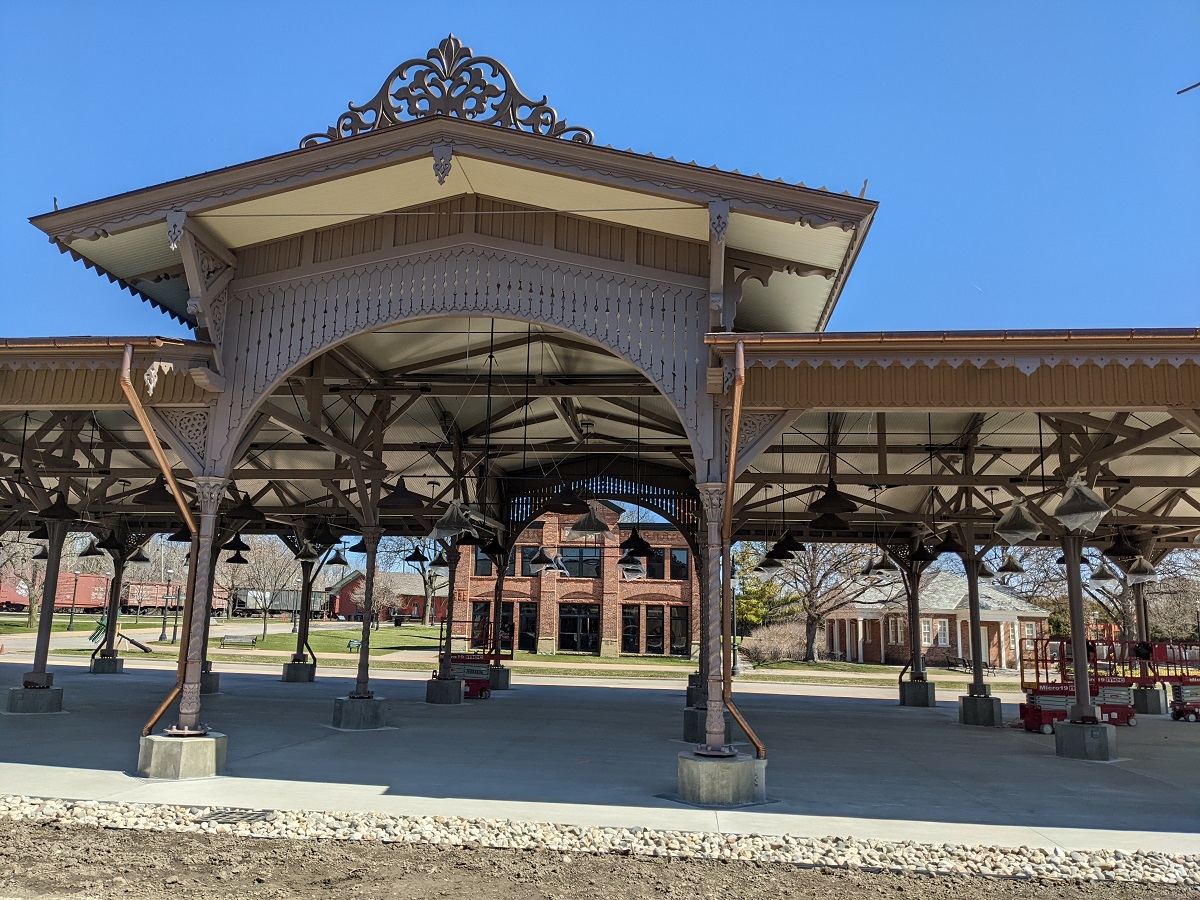 The entrance that originally faced north on April 10, 2022, now behind Hanks Silk Mill in Greenfield Village. There are original columns at both sides of the side-entrance gable, but rows of specially designed columns, integral to the moment frame, visible to both the left and right of this side-entrance. / Photograph by Debra A. Reid

The 16 new columns are distinctive from the originals in several ways. They are smooth, not spiral. They have fluted gussets (brackets) at the top, instead of capitals. Finally, they are larger in diameter than the originals. These distinctions make clear which columns are original and which are not, to inform guests of the innovation required to ensure their safety.

How Does the New Footprint Compare to the Original?

What was originally the west entrance, now facing State Street in Greenfield Village, on April 10, 2022, with original columns as well as additional columns installed in two rows in front of the structure. This gives guests a better impression of the original building footprint, though an additional eight columns would be required to mimic the full original size of 11 bays and 242 feet in length. / Photograph by Debra A. Reid

The reconstructed vegetable shed is 7/11ths as long as the original. Why 7/11ths? The original structure was three bays wide by eleven bays long. A bay is the space between architectural elements. You can see the eleven bays visible on the south side of the structure in the detail below from a late-1880s photograph—five bays from the east-facing entrance to the south-facing entrance, with that entrance bay being the sixth bay, and then five bays beyond it to the west-facing entrance (less easy to see given the perspective). The Central Market building towers in the distance.

The reconstructed Detroit Central Market vegetable shed in Greenfield Village includes only seven of the eleven original lengthwise bays—three on each side of the side-entrance bay. Thus, the reconstruction is 7/11ths the length of the original. Jim McCabe, former collections manager and buildings curator at The Henry Ford, deserves credit for this specification, as he spent nearly two decades working on the project between 2003 and 2022.

The reconstruction is true to the width of the original, three bays total—one on each side of the central entrance, which is also a bay. You can see these bays most clearly in this July 6, 2021, photograph below, showing columns in place and the roof structure in process.

Detroit Central Market reconstruction in process on July 6, 2021, showing the three-bay width and the seven-bay length. / Photograph by Debra A. Reid

How Much of the Timber-Frame Roof Is Original?

The timber-framing system is clearly visible inside the structure. Just walk in and look up! Approximately 80% of the original old-growth white pine was reused in the reconstruction. This resulted from careful detective work during the quick dismantling process.

The Henry Ford contracted with Christian & Son, Inc., to number and measure the original structural and decorative woodwork elements, photograph them, and prep the material for storage. Then we contracted with Jeff DuPilka and West Shore Services, Inc., to disassemble the structure. West Shore, Christian & Son, and staff from The Henry Ford accomplished this in 10 to 12 weeks during the summer of 2003. 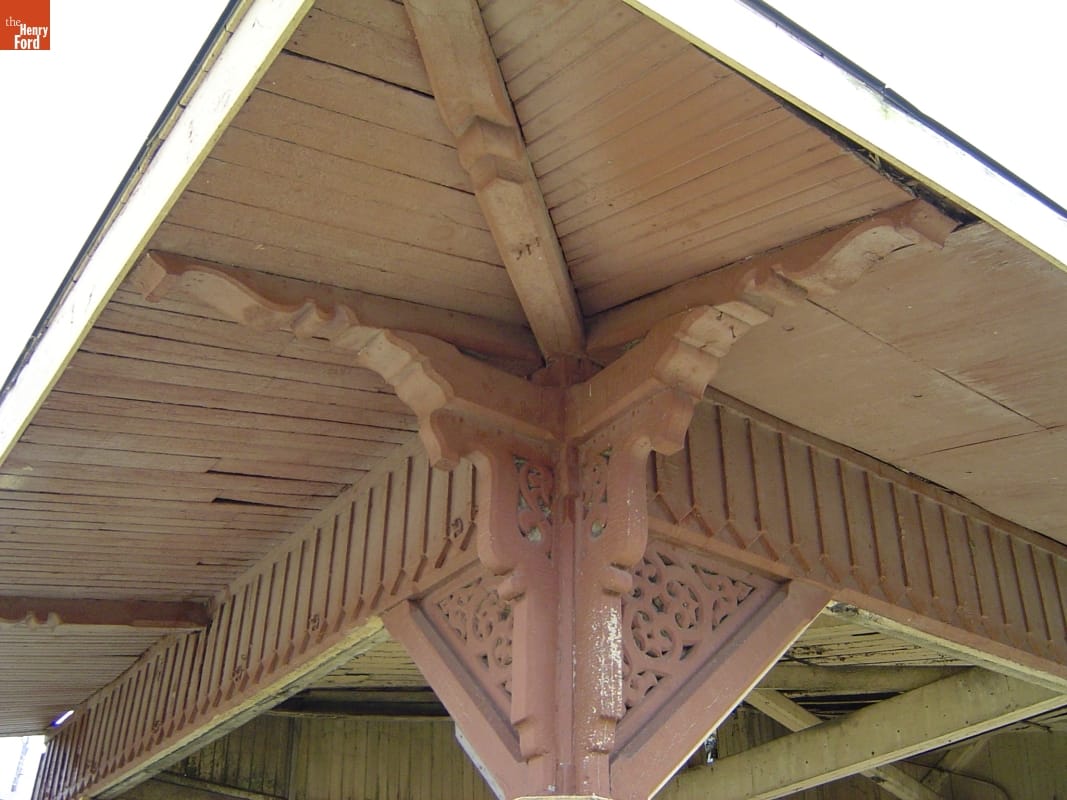 Woodwork in one of four outside corners, original to the vegetable shed at Detroit Central Market and still intact after it served as the riding stable at Belle Isle, Detroit, Michigan (photographed in 2003). / THF113493

Christian & Son, Inc., documented all original wooden elements, including those in the section of the building that was fire-damaged due to a car wreck (visible in the photograph below). They believed that documenting the whole required documentation of all parts, so they took as much care tagging, measuring, and dismantling this burned section as they did with the other sections. In fact, timbers from the charred section were reused in the reconstruction and are visible on the exterior of the originally east-facing entrance (the entrance now facing the Detroit Toledo & Milwaukee Roundhouse in Greenfield Village). 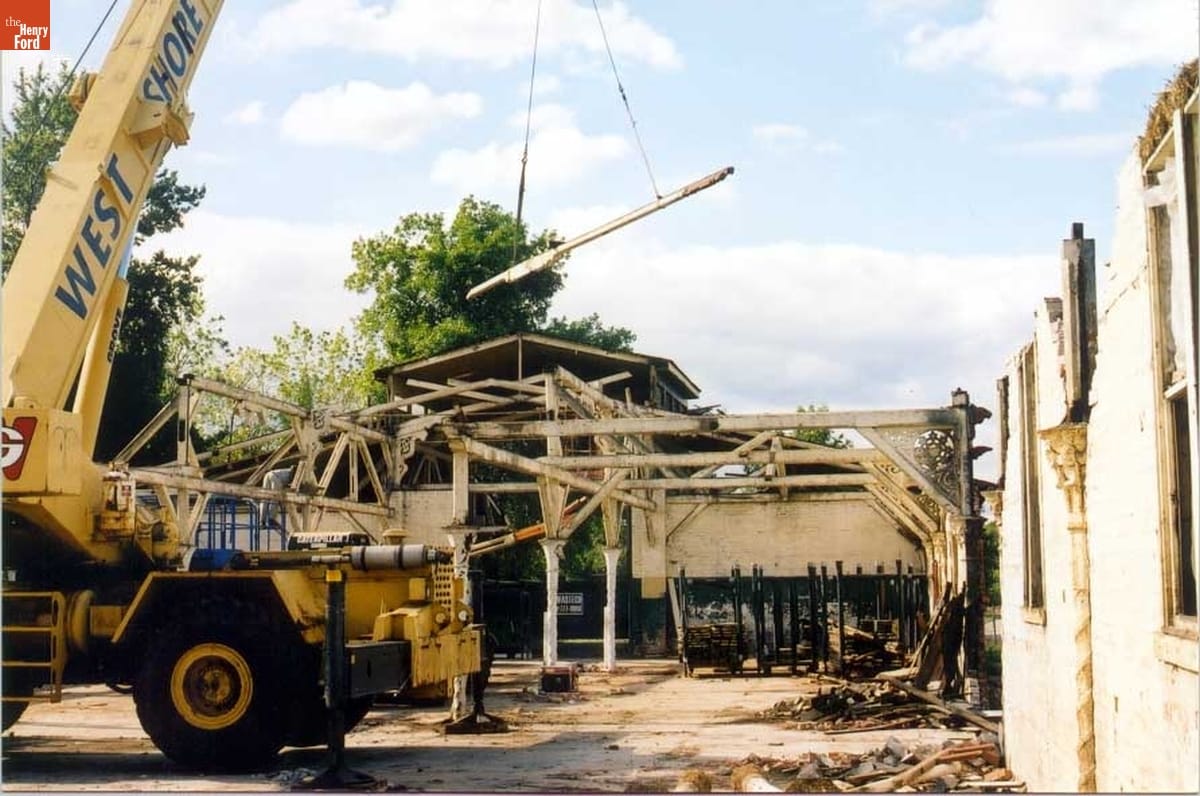 What Are Some Notable Details?

The reconstruction of the Detroit Central Market vegetable shed in Greenfield Village includes ornamental woodwork throughout. The following rendering by architecture firm Quinn Evans itemizes seven distinctive brackets, each designed for a specific location in the building, and one “drop,” an accessory at all four gable entrances and used with the decorative fascia along the eaves. 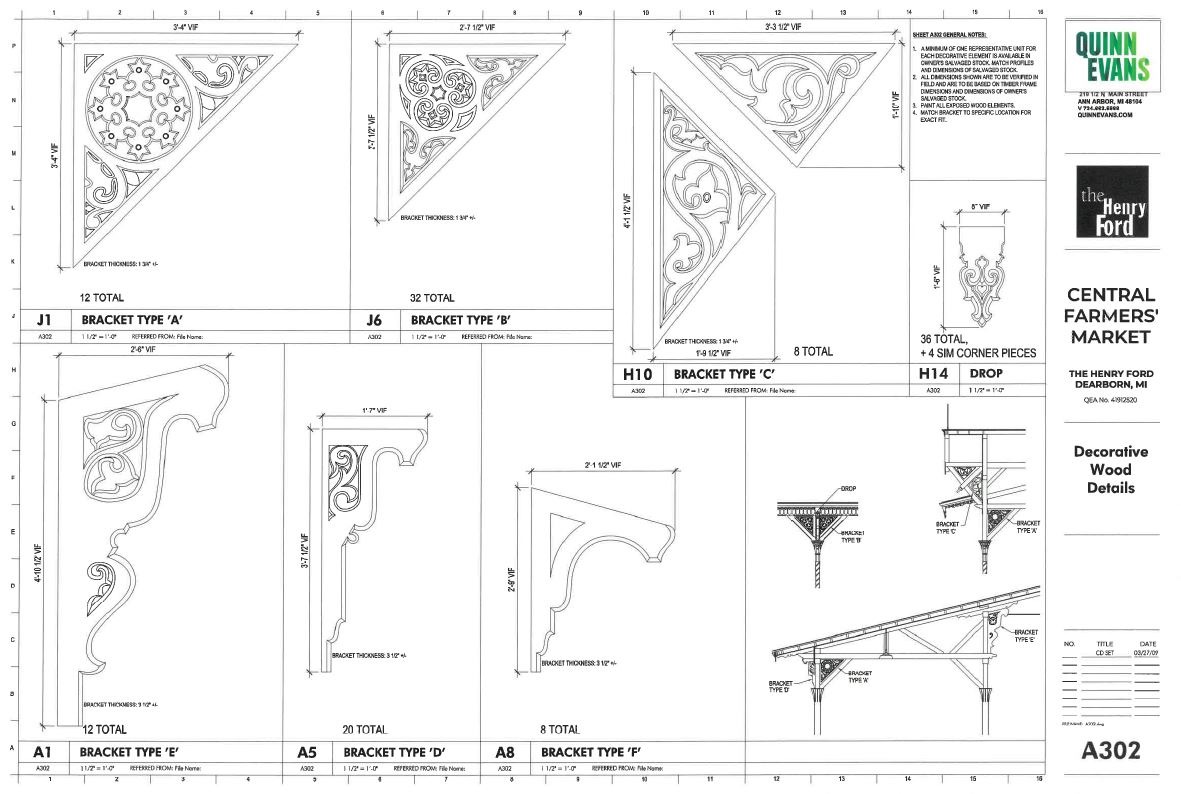 These decorative elements were all hand-carved during the original construction in 1860. Not all of the decorative elements survived the move to Belle Isle. The elaborate crests atop each of the four gable entrances on the Detroit Central Market vegetable shed, for example, were not included when it served as the horse shed on Belle Isle, as the illustration of it in Seventy Glimpses of Detroit indicates. Missing pieces were replicated to complete the structure’s appearance during its heyday as a public market. 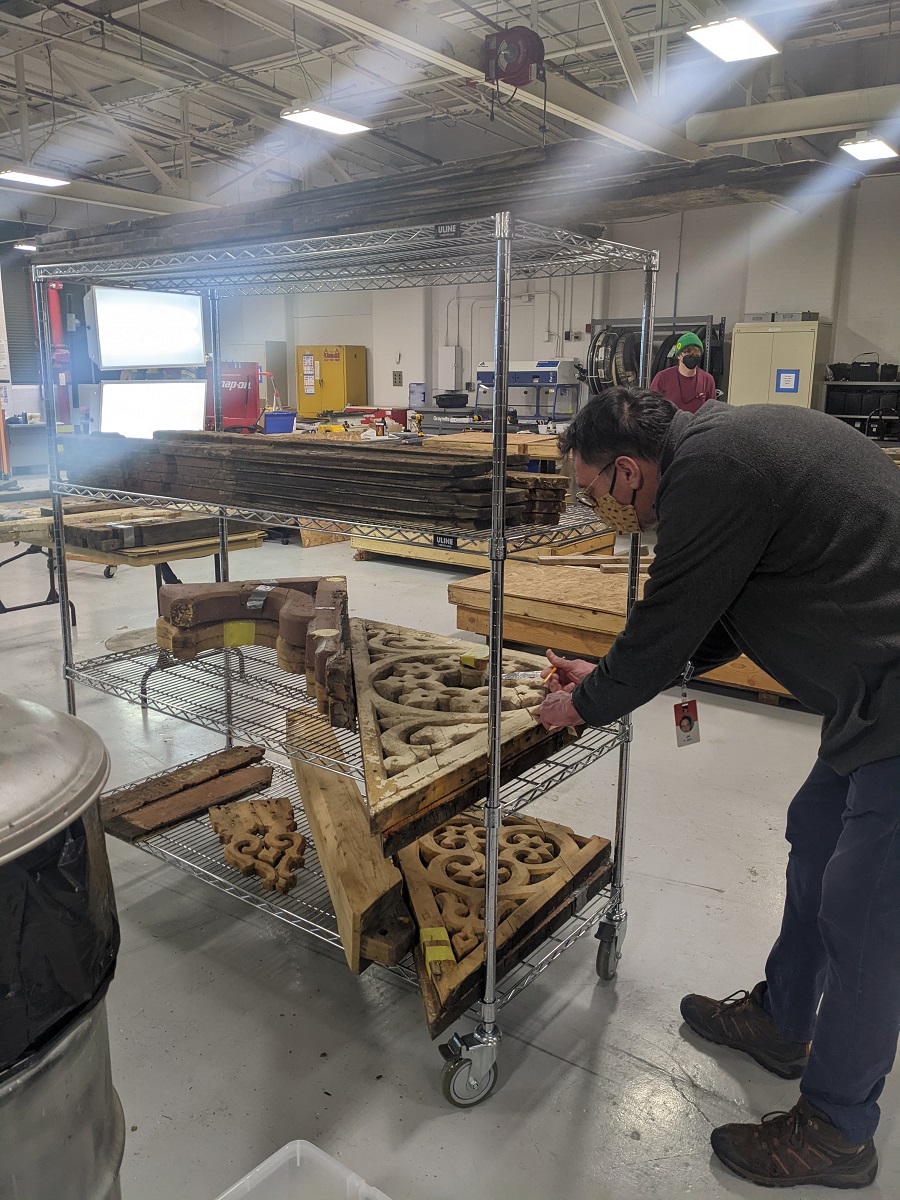 Jim Johnson, Director of Greenfield Village & Curator of Historic Structures and Landscapes at The Henry Ford, starting to inventory architectural elements from the Detroit Central Market vegetable shed not used in the reconstruction, February 8, 2022. / Photograph by Debra A. Reid

What Style Is the Building?

Each of the ornamental elements was part of a stylistic whole that the reconstruction faithfully conveys. If it reminds you of a Swiss chalet, you have an astute eye for style. John Schaffer, the architect, trained in Munich, Bavaria, and incorporated Schweizerstil (Swiss-chalet style) details into his plans, drafted in 1860. Thus, this structure likely introduced that aesthetic to Detroiters. His plans included gently sloping gabled roofs with wide eaves, large brackets, and decorative fretwork, all details common to Swiss-style architecture. Additional Swiss features included sawtooth siding, scroll-sawn fascia, and the elliptical design of the siding at each gable-end.