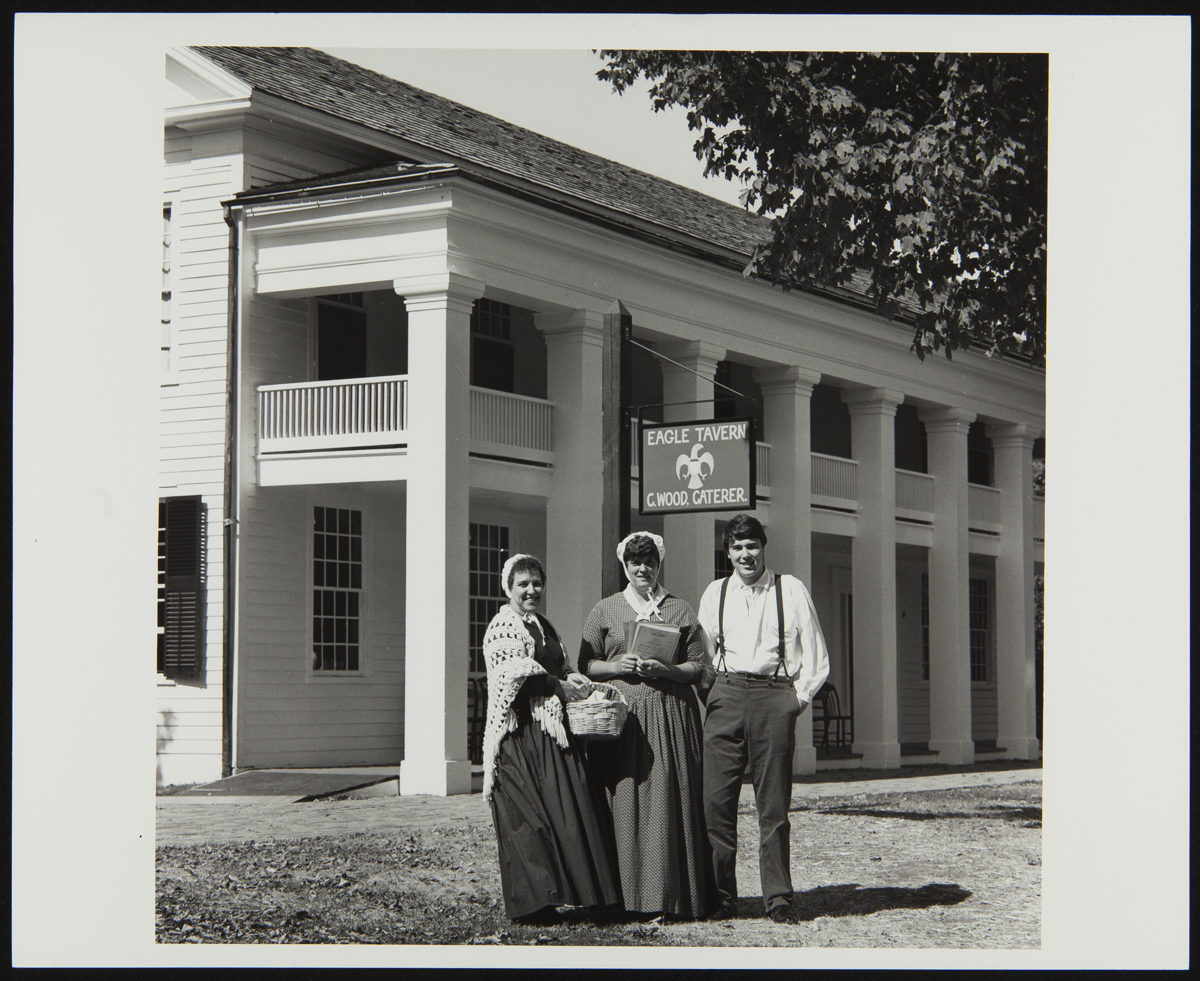 Outside Greenfield Village’s Eagle Tavern, an early 1830s building originally from Clinton, Michigan, is a sign that reads: “Calvin Wood, Caterer.” Yes, Calvin Wood was a real guy—and the tavernkeeper at Eagle Tavern in 1850. The Eagle Tavern building was just a few years old when Calvin Wood and his young family arrived in nearby Tecumseh Township about 1834. Little could Calvin guess that life’s twists and turns would mean that one day he would be the tavernkeeper there! 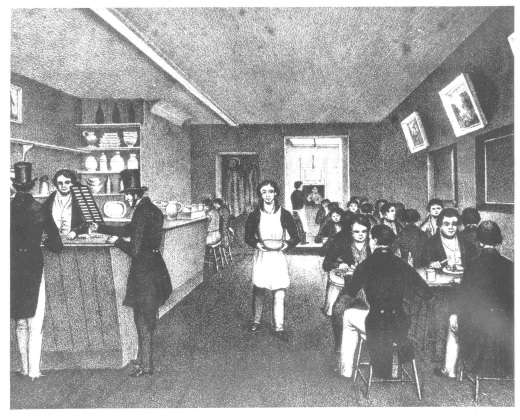 Why caterer? In the 19th century, a “caterer” meant someone who not only provided food and drink, but who also catered in any way to the requirements of others. Some tavernkeepers, like Calvin Wood, referred to themselves as “caterers.” As Eagle Tavern’s tavernkeeper a few years hence, Calvin Wood would offer a bed for the night to travelers, a place to get a meal or a drink, a place to socialize and learn the latest news, and a ballroom upstairs to hold dances and other community events. 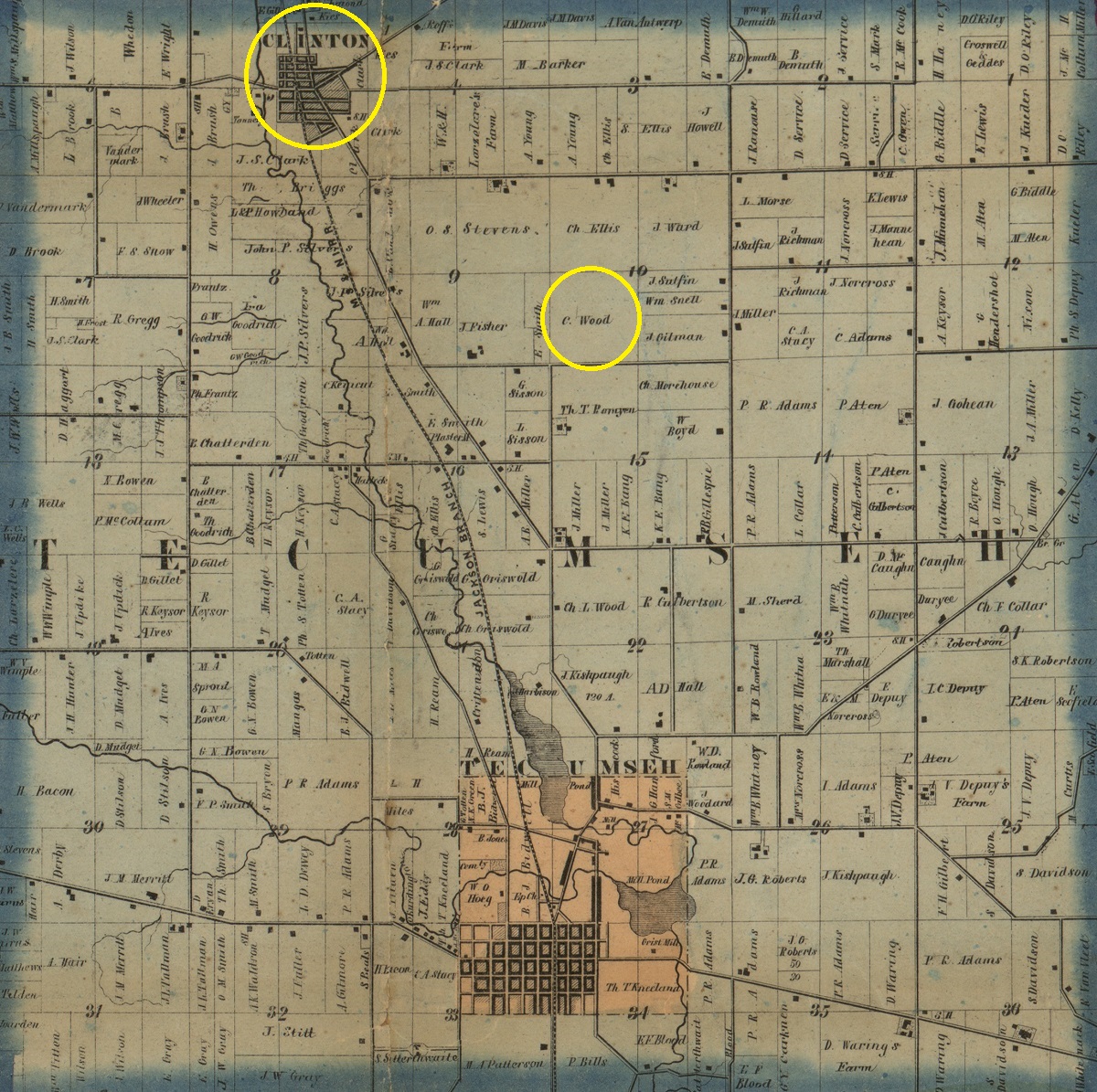 In the mid-1830s, Calvin and his wife Jerusha sold their land in Onondaga, New York, and settled on a farm with their children in Lenawee County, Michigan—a few miles south of the village of Clinton and a few miles north of the village of Tecumseh. (Calvin and Jerusha’s children probably numbered four—all but one would die in infancy or childhood.) The Wood family had plenty of company in this journey. From 1830 to 1837, Michigan was the most popular destination for westward-moving settlers caught up in the highly contagious “Michigan Fever.” During this time, the Michigan Territory’s population grew five-fold!

The move to Michigan offered promise, but the years ahead also held misfortune. In the early 1840s Calvin lost Jerusha, and some of their children likely passed away during this time as well. By 1843, Calvin had married for a second time, this time to Clinton resident Harriet Frost Barnum.

Harriet had left New York State with her parents and siblings and settled in Monroe County by 1830. The following year, 19-year-old Harriet married John Wesley Barnum. The Barnums moved to Clinton, where they were operating a “log hotel” along the Chicago Road in the fall of 1835. In October 1836, Wesley Barnum died, leaving Harriet a young widow with two daughters: Irene, age two, and Frances, age four. After their marriage, Calvin and Harriet’s blended household included not only Harriet’s two daughters, but also Calvin’s son. (There may also have been other Wood children in the home as well, though they might have passed away before this time.)

In the early and mid-19th century, tavernkeeping was a small and competitive business. It didn’t require much experience or capital, and as a result, most taverns changed hands often. In 1849, farmer Calvin Wood decided to try his hand at tavernkeeping, an occupation he would engage in for five years. Many other tavernkeepers were farmers as well—like other farmer-tavernkeepers, Calvin Wood probably supplied much of the food for tavern customers from his farm. Calvin Wood didn’t run the tavern alone—a tavernkeeper’s family was often deeply involved in business operations as well. And, of course, Calvin’s wife Harriet was the one with previous experience running a tavern! Harriet would have supervised food preparation and the housekeeping. Frances and Irene likely helped their mother and stepfather in the tavern at times. Calvin’s son, Charles, was married and operating his own Tecumseh Township farm by this time. 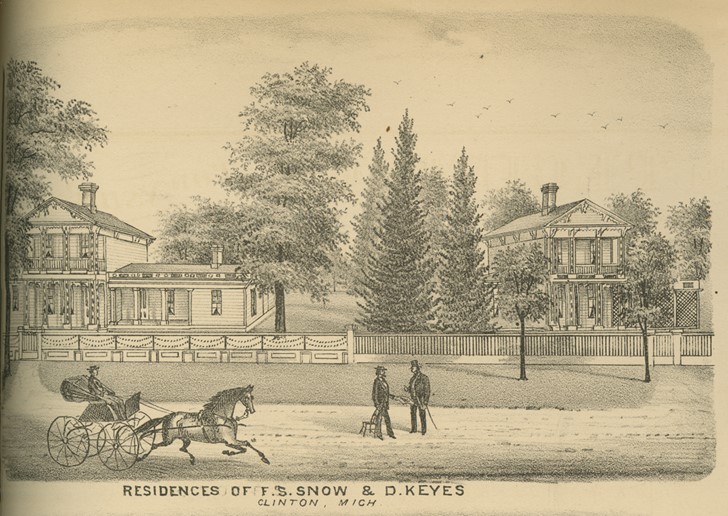 By the time that Calvin and Harriet Wood were operating the Eagle Tavern, from 1849 to 1854, the first stage of frontier life had passed in southern Michigan. Frame and brick buildings had replaced many of the log structures often constructed by the early settlers twenty-some years before. The countryside had been mostly cleared and was now populated by established farms. 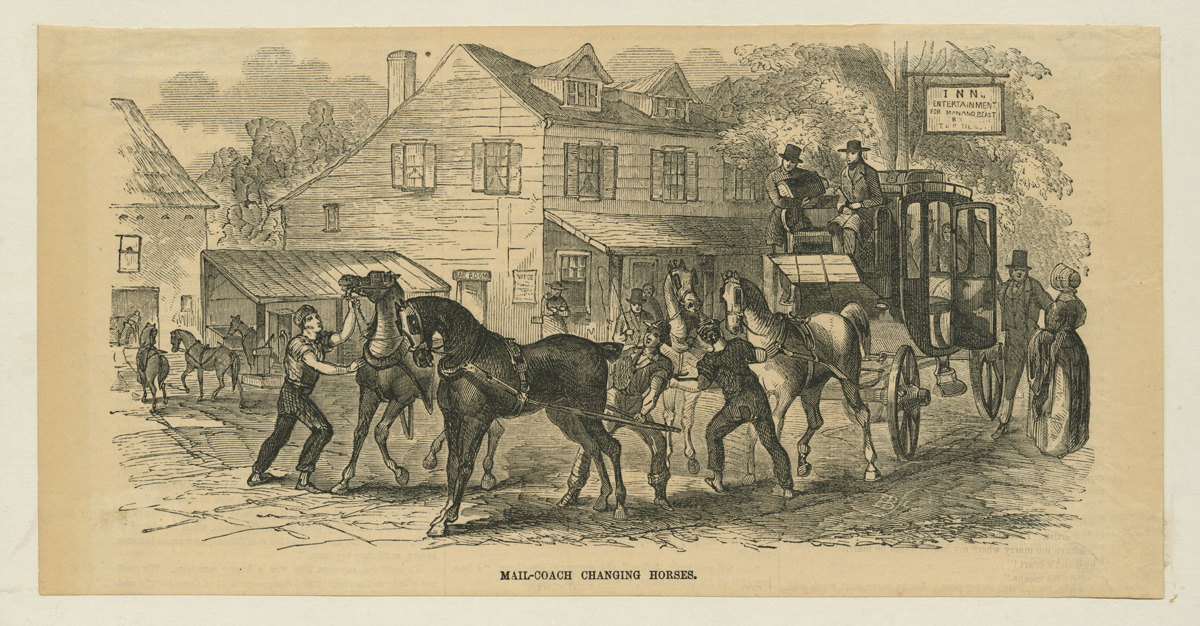 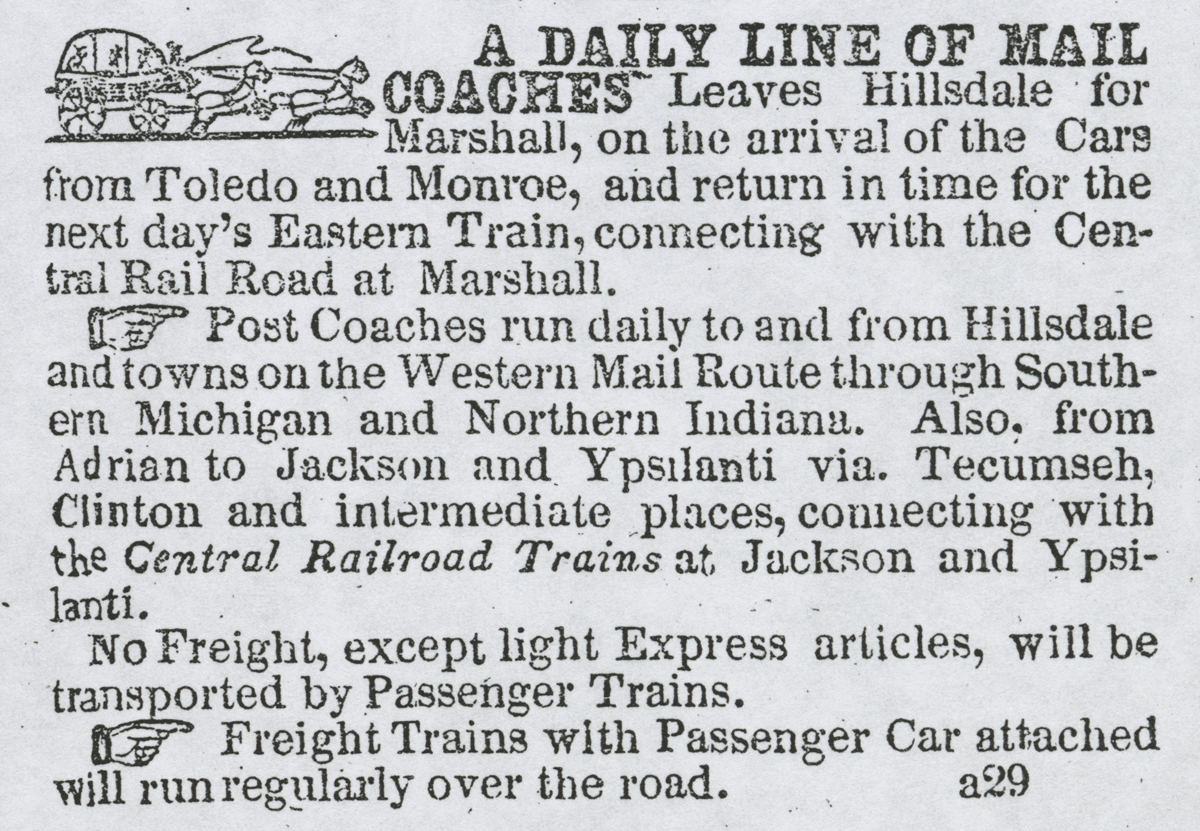 Yet Clinton, whose early growth had been fueled by its advantageous position on the main stagecoach route between Detroit and Chicago, found itself bypassed by railroad lines to the north and south. The Chicago Road ran right in front of the Eagle Tavern, but it was no longer the well-traveled route it had once been. Yet stagecoaches still came through the village, transporting mail and providing transportation links to cities on the Michigan Central and Michigan Southern railroad lines. 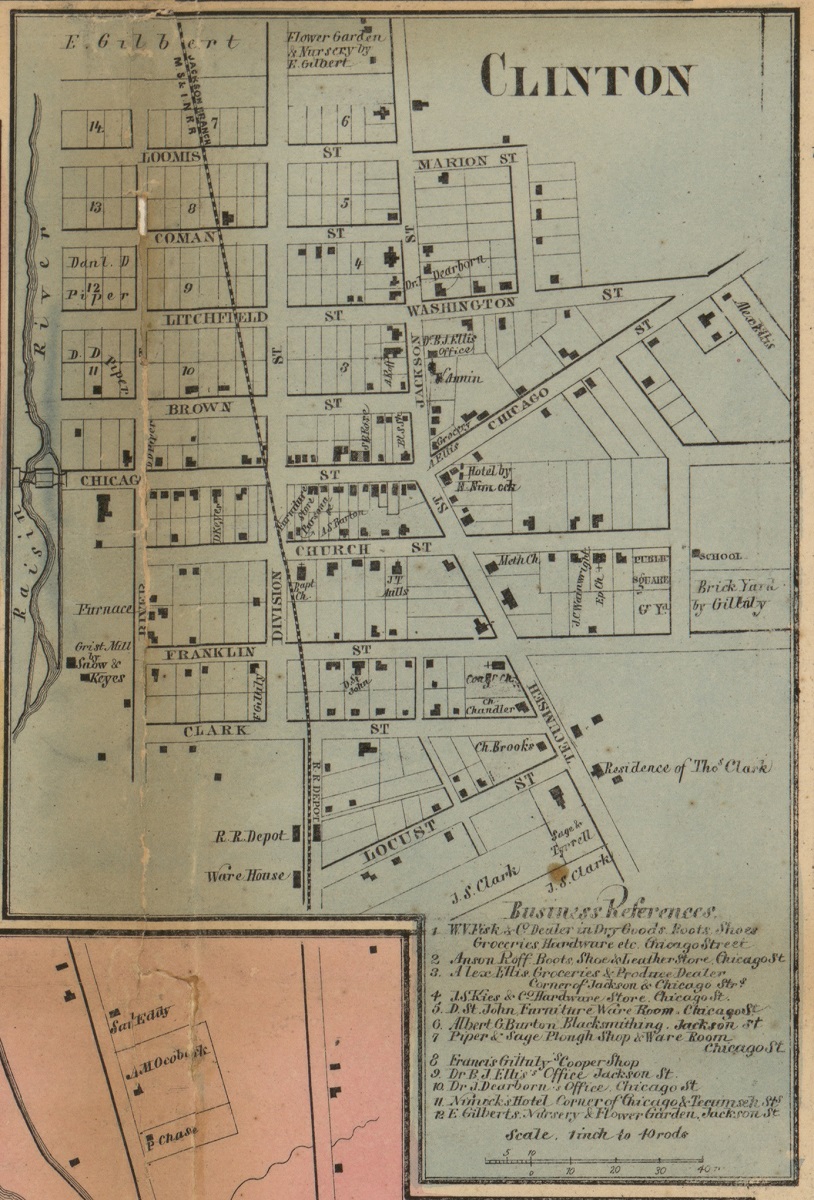 Though Clinton remained a small village, it was an important economic and social link—its businesses and stores still served the basic needs of the local community. During the years that Calvin operated the Eagle Tavern, Clinton businesses included a flour mill, a tannery, a plow factory, a wagon maker, wheelwrights, millwrights, coopers who made barrels, cabinetmakers who made furniture, chair manufacturers, and a boot and shoe maker. Clinton had a blacksmith shop and a livery stable. The village also had carpenters, painters, and masons. Tailors and seamstresses made clothing. A milliner crafted ladies’ hats. Merchants offered the locals the opportunity to purchase goods produced in other parts of the country, and even the world: groceries (like salt, sugar, coffee, and tea), cloth, notions, medicines, hardware, tools, crockery, and boots and shoes. A barber provided haircuts and shaves. Three doctors provided medical care. In 1850, like Calvin and Harriet Wood, most of Clinton’s inhabitants had Yankee roots—they had been born in New York or New England. But there were also a number of foreign-born people from Ireland, Scotland, England, or Germany. At least two African American families also made Clinton their home.

Many of Calvin’s customers were probably people who lived in the village. Others lived on farms in the surrounding countryside. Calvin’s customers would have included some travelers—in 1850, people still passed through Clinton on the stagecoach, in their own wagons or buggies, or on horseback. 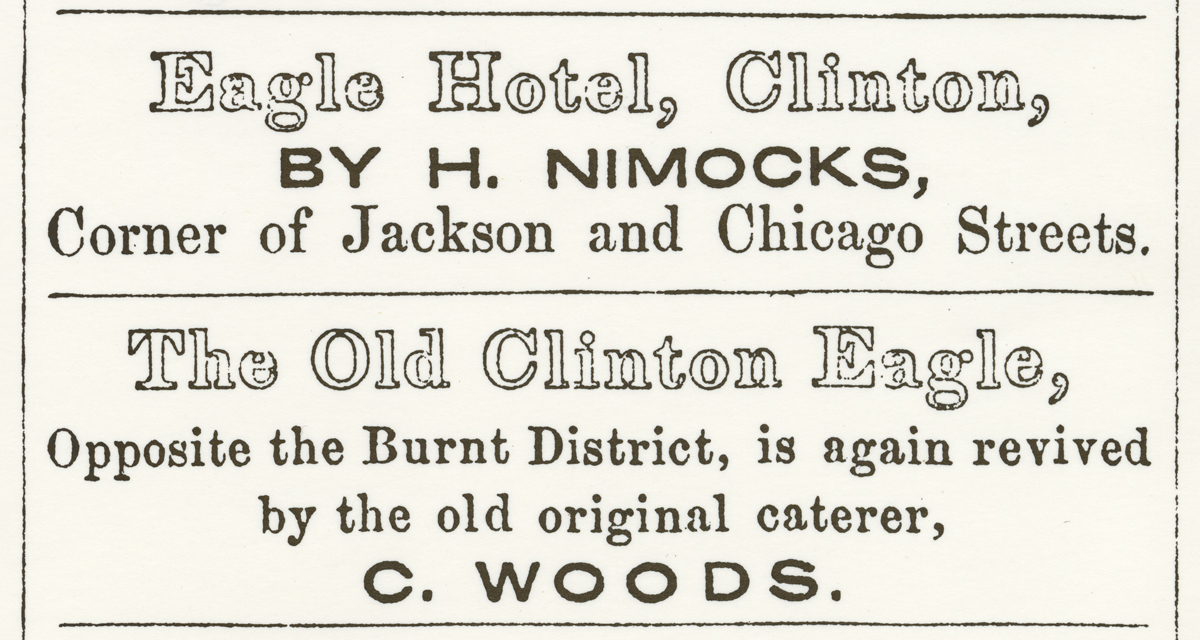 Though Clinton was a small village, Calvin Wood faced competition for customers—the Eagle Tavern was not the only tavern in Clinton. Along on the Chicago Road also stood the Eagle Hotel, operated by 27-year-old Hiram Nimocks and his wife Melinda. It appears that the Eagle Hotel accommodated boarders as well—seven men are listed as living there, including two of the town’s merchants. These men probably rented bedrooms (likely shared with others) and ate at a common table.

In 1854, Calvin Wood decided that it was time for his five-year tavernkeeping “career” to draw to a close. He and Harriet no longer operated the Eagle Tavern, selling it to the next tavernkeeper. Initially, the Woods didn’t go far. In 1860, Calvin is listed in the United States census as living in Clinton as a retired farmer. Yet Calvin and Harriet Wood soon moved to Hastings, Minnesota, where Harriet’s daughters, now married, resided. There Calvin and Harriet would end their lives, Calvin dying in 1863 and Harriet the following year. 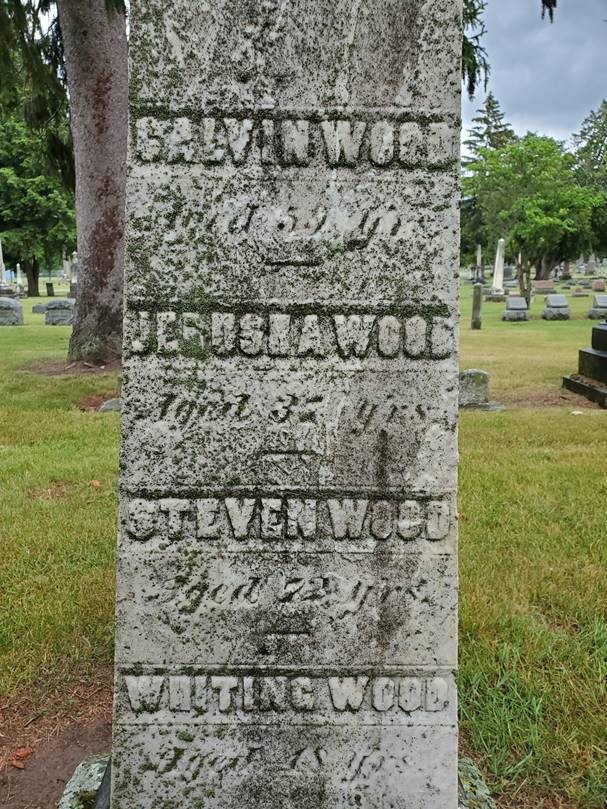 You can still pay Calvin a “visit” at Brookside Cemetery in Tecumseh, where he shares a tombstone with his first wife, children, his father, and his brother’s family. For Harriet? You’ll have to make a trip to Hastings, Minnesota.


Jeanine Head Miller is Curator of Domestic Life at The Henry Ford. Many thanks to Sophia Kloc, Office Administrator for Historical Resources, and Lisa Korzetz, Registrar, for assistance with this post.