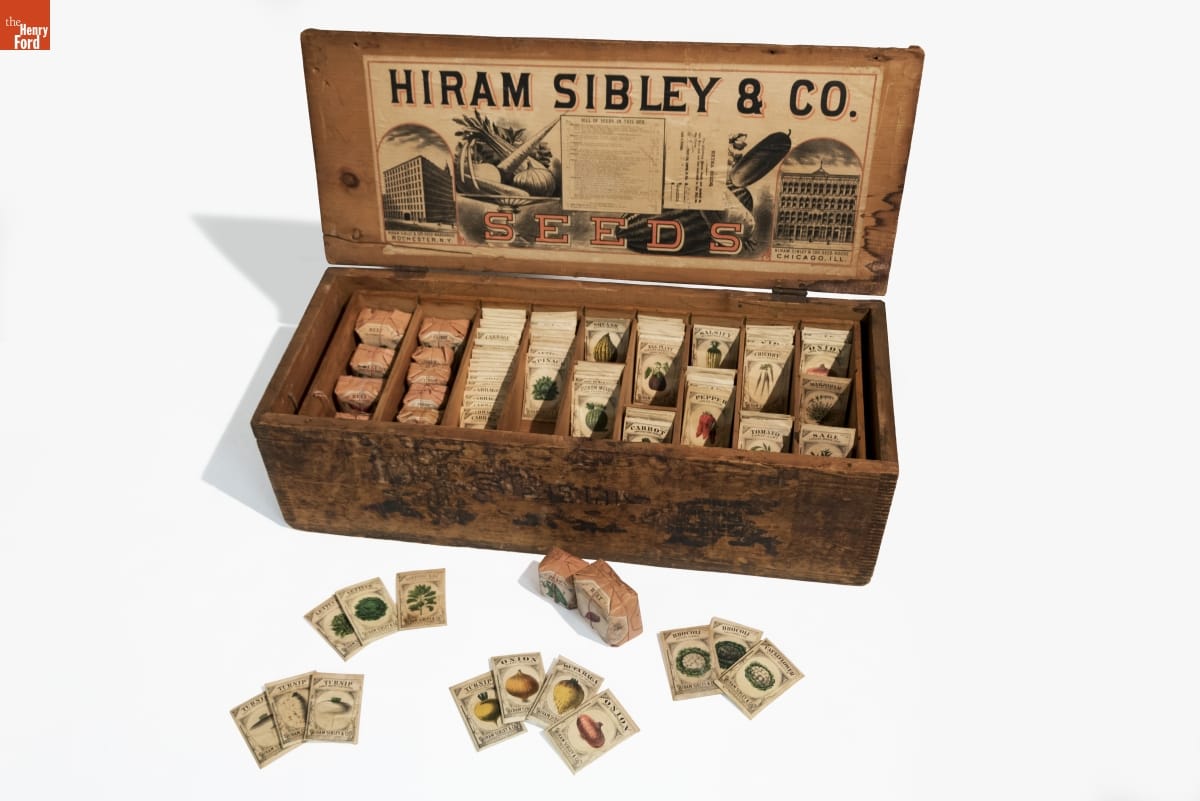 Several million guests have seen a reproduction Sibley seed box, based on an original box in our collections, in the J.R. Jones General Store in Greenfield Village since 1994, when the box became part of the reinterpreted interior. Commercial seed sales of pre-packaged vegetable and flower seeds began in earnest during the 1860s, and by the mid-1880s, Hiram Sibley & Company advertised itself as the world’s largest seed company. That might be true. Sibley, who made his fortune as executive of the Western Union Telegraph Company, invested in farms and packing houses in several states and engaged in seed trade in several foreign countries. His entrepreneurial bent warranted more exploration, as did the details of the seed packets, all stowed carefully in the box in the General Store.

The reference photograph in our collections database for the original seed box showed a box with seed packets. The accession number, 29.1987.18.1, indicated that this was an early addition to The Henry Ford’s collections—the first number, 29, means that it was acquired in 1929. The second number indicates that it was in the 1,987th lot acquired that year, and the third number indicates that the box was the 18th item in the 29.1987 grouping. In fact, as research ultimately disclosed, our collections included the box, plus 108 original seed packets and a Sibley & Co. Seed catalog.

My need to know more started a chain reaction. First, this object had been in the collection for 90 years. It has known provenance: Accession records indicate that it was purchased with other items from a store in the tiny, rural, upstate New York community of Rock Stream. The Barnes family—Charles W. and then his son, Alonzo S.—operated the store. Alonzo died in 1929, which may have precipitated the sale. Our registrars researched and catalogued all parts of the set. We also acquired archival documents—a map of the town from the time the Barnes family operated the store and two postcards of the town—for our collections to add context around the seed box. 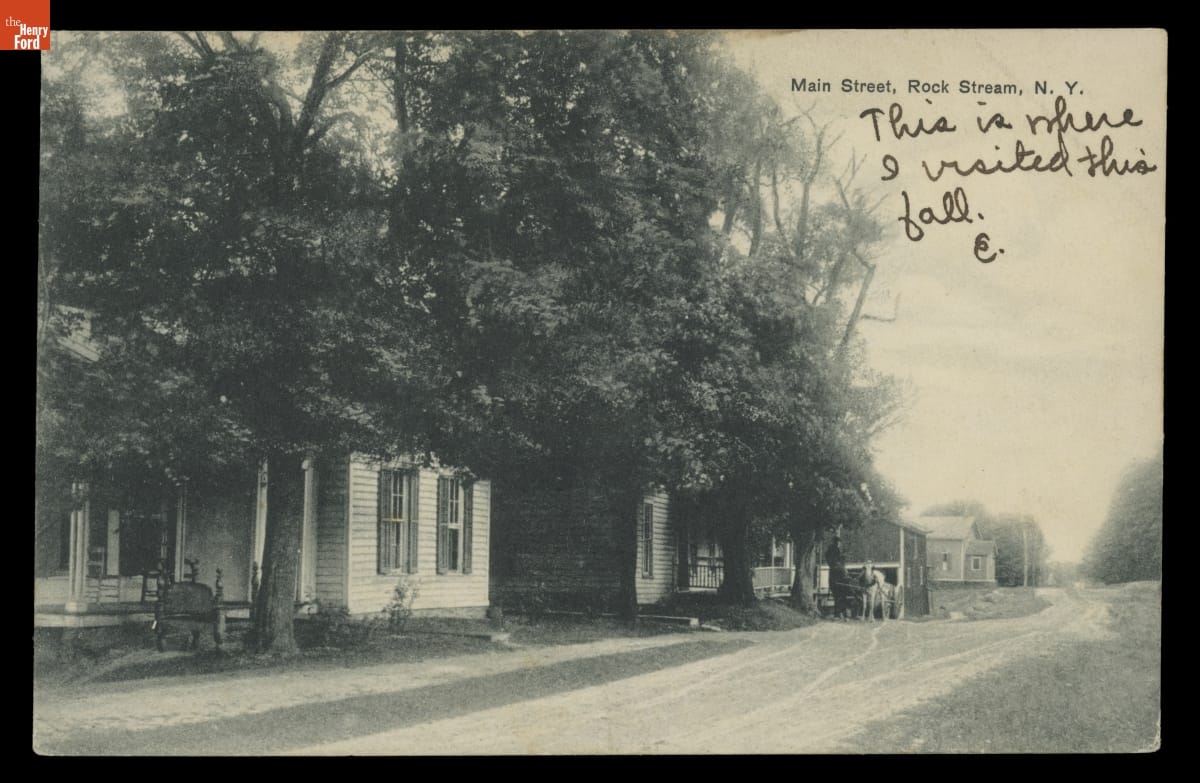 Filling in details about seed packets required further reconnaissance. This required removing the seed box from exhibit at the end of the 2019 Greenfield Village season. Our Exhibits team moved the reproduction box and the authentic seed packets it contained to our conservation labs. Conservation staff removed the packets, checked for damage, then cleaned and prepared the packets for digitization. In the meantime, Collections Management staff located the original box in collections storage and moved it to the conservation labs for cleaning.

Once the packets were cleaned, they were moved to our archives, where the packets were imaged. After the box was cleaned, Collections Management staff moved it to the photography studio. The individual seed packets, once imaged, also were moved to the photo studio. There, the packets rejoined the box, fitting into compartments spaced to accommodate “papers” as well as multiple-ounce “packets” of seeds. The final photograph above shows the rejoined box and original seeds – cabbage, carrot, cauliflower, eggplant, onion, pea, rutabaga, tomato, turnip, and other vegetables.

Some of the individual seed packets that were digitized. See them all in our Digital Collections.

After the photo session, the seeds returned to the reproduction box, the box was sealed with its Plexiglas top to protect them, and Exhibits staff returned the box with its contents to the General Store in Greenfield Village.

It is important to note that the investigation, relocation, cleaning, digitizing, photography, and cataloging all occurred between January and March 2020, before COVID-19 closed the museum and delayed the opening of Greenfield Village. During that closure, between March 15 and July 9, the digitized records became part of numerous blogs written to meet the needs of patrons seeking information about food sources, vegetable gardening, food security—and about tomatoes!

It may seem difficult to justify the amount of time required from so many people to digitize one box and its many seed packets during the process. Each staff member involved in the process had to juggle numerous competing projects to make time to attend to the box and its packets. However, their work created invaluable digital resources that have already enhanced several of our blog posts. We may never know how many people were inspired to plant their own vegetable garden during a year of uncertainty partially, or wholly, because of “How Does Your Vegetable Garden Grow?,” or who just had to have a BLT after reading “Multiple Takes on Tomatoes.”

This is what digitization can do, and this is the effort that it takes. We all do it in the spirit of life-long learning.