Our new limited-engagement exhibit, Collecting Mobility: New Objects, New Stories, opening to the public October 23, 2021, takes you behind the scenes at The Henry Ford to show you how we continue to grow our vast collection of more than 26 million artifacts. One key question the exhibit asks is why we collect the items we collect. To get more insight on the artifacts on exhibit and future trends that may impact our collecting, we reached out to several of our partners. In this post from that series, our friends at General Motors (GM), donors of the General Motors first-generation self-driving test vehicle in the exhibit and contributors to our Driven to Win: Racing in America exhibit, tackle questions about autonomous vehicles (AVs), electric vehicles (EVs), and racing.

Our latest permanent exhibit, Driven to Win: Racing in America, is presented by General Motors. How has GM’s racing program evolved over time?

GM’s Chevrolet and Cadillac brands have both had long, storied histories in motorsports. Racing is a fundamental part of what we do—from transferring technology learned on the track to help us build better vehicles to connecting with consumers through something they love. 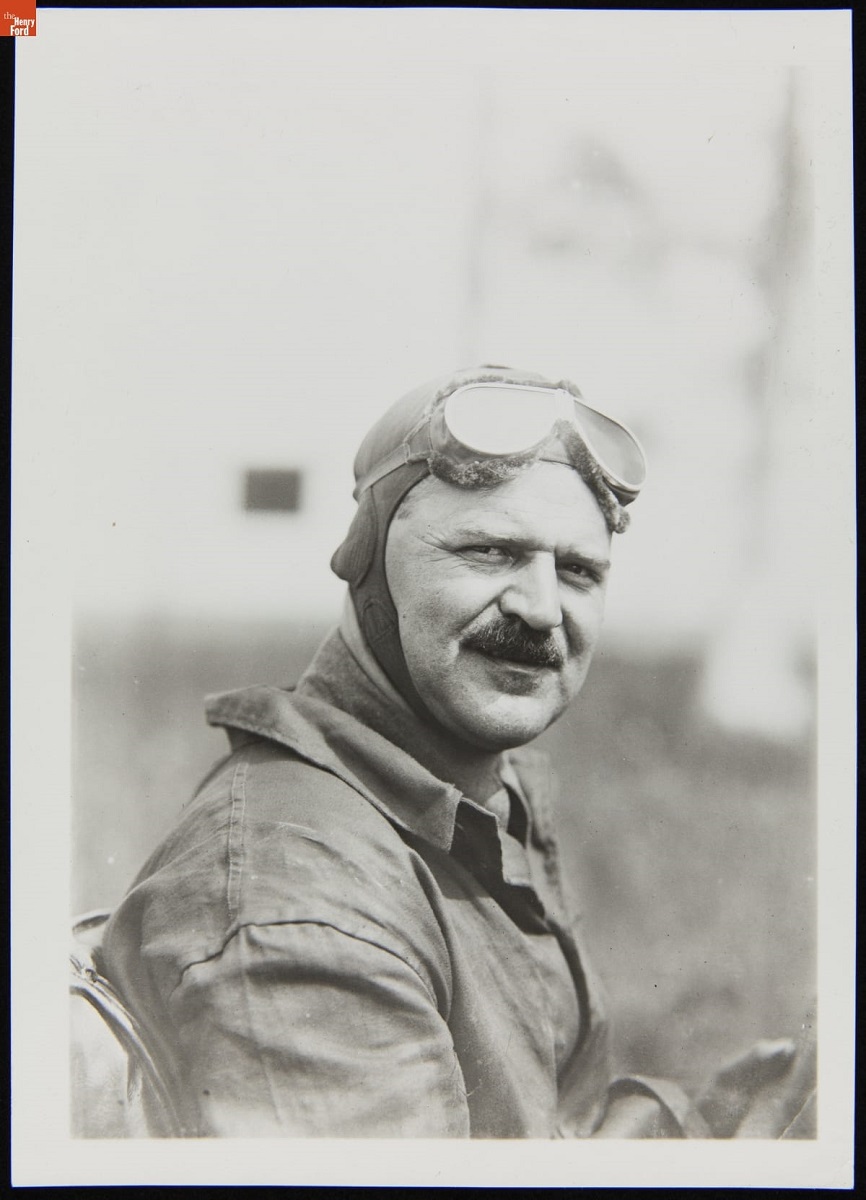 Chevrolet has been successful in professional motorsports in the United States and around the globe, capturing many manufacturer, driver, and team championships in NASCAR, IndyCar, IMSA, and the NHRA. From stock cars to advanced prototypes, Cadillac Racing has a rich history—more than half a century—of racing around the world and around the clock on some of the world’s notably challenging circuits.

Off the track, our racing programs have evolved with the help of our GM facilities. In 2016, General Motors opened the doors to the all-new GM Powertrain Performance and Racing Center—a state-of-the-art facility designed to enhance the development processes for the company’s diverse racing engine programs.

In 2021, General Motors broke ground on the new Charlotte Technical Center, a 130,000-square-foot facility that will expand GM’s performance and racing capabilities. The facility is a $45 million investment for GM and it will be a strong hub for the racing and production engineering teams to collaborate, share resources, and learn together, delivering better results more quickly, both on the racetrack and in our production vehicles. 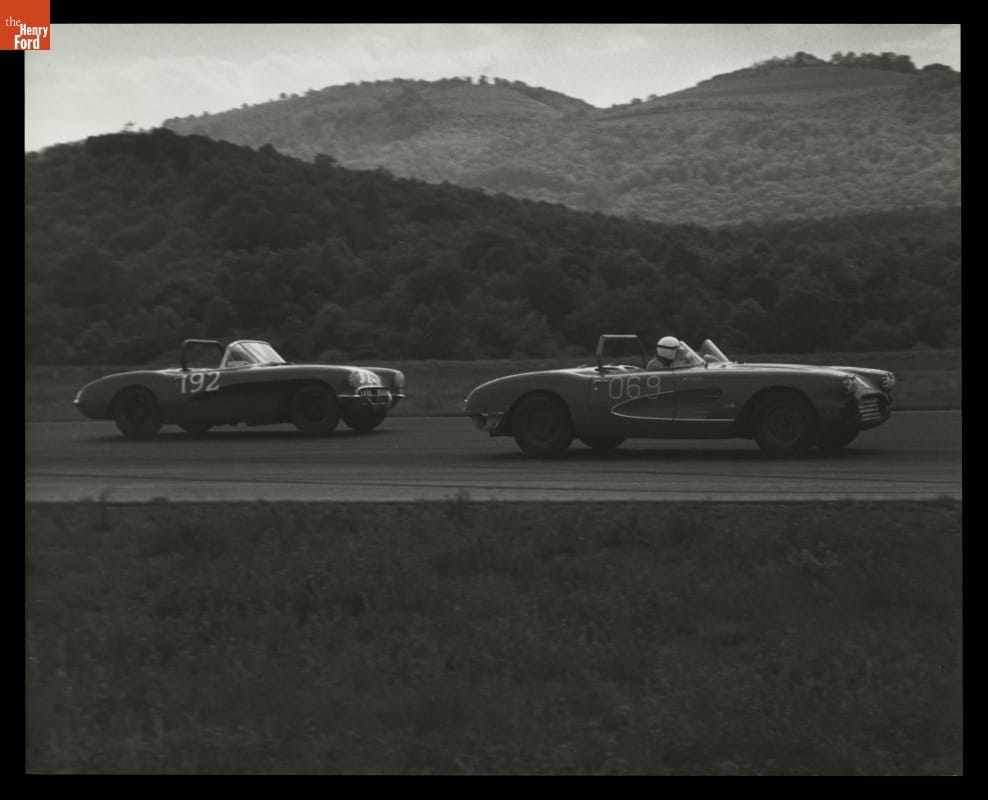 The Chevrolet Corvette has a long, proud history in professional and amateur sports car racing. This pair of Corvettes is seen at a Sports Car Club of America race in Maryland in 1959. / THF135778

Engineering has become incredibly advanced over time, and leveraging tools between racing and production has become extremely important. We use tools like computational fluid dynamic models, which uses applied mathematics, physics, and computational software to visualize how a gas or liquid flows. These CFD models help us predict things like powertrain performance and aerodynamics.

Also, our Driver-in-the-Loop simulator allows us to test vehicles on courses virtually. It is the combination of two technologies: a real-time computer (with vehicle hardware) and a driving simulator. The driving simulator allows our development engineers to drive and test the real-time computer simulation and added hardware system on a virtual track, just like they would a physical prototype. The simulator was used extensively during the development of the mid-engine Corvette C8.R race car.

The 2001 C5-R Corvette is currently on loan from General Motors and can be seen by guests inside Driven to Win: Racing in America. Why was this vehicle selected to go on display inside Henry Ford Museum of American Innovation?

The Corvette C5-R made its debut in 1999 at the Rolex 24 at Daytona and was a fixture of global GT racing for the next five years. From 1999–2004, Corvette Racing and the C5-R set the standard for racing success with 31 victories in the American Le Mans Series, along with an overall victory at the Rolex 24 in 2001.

During six years of competition, Corvette Racing—the first factory-backed Corvette team in the car’s history—led the C5.R to an overall victory at the Daytona 24-hour race and three 1-2 finishes in the GTS class at the 24 Hours of Le Mans. During the 2004 season, Corvette Racing won every race the team entered and captured every pole position in the American Le Mans Series. 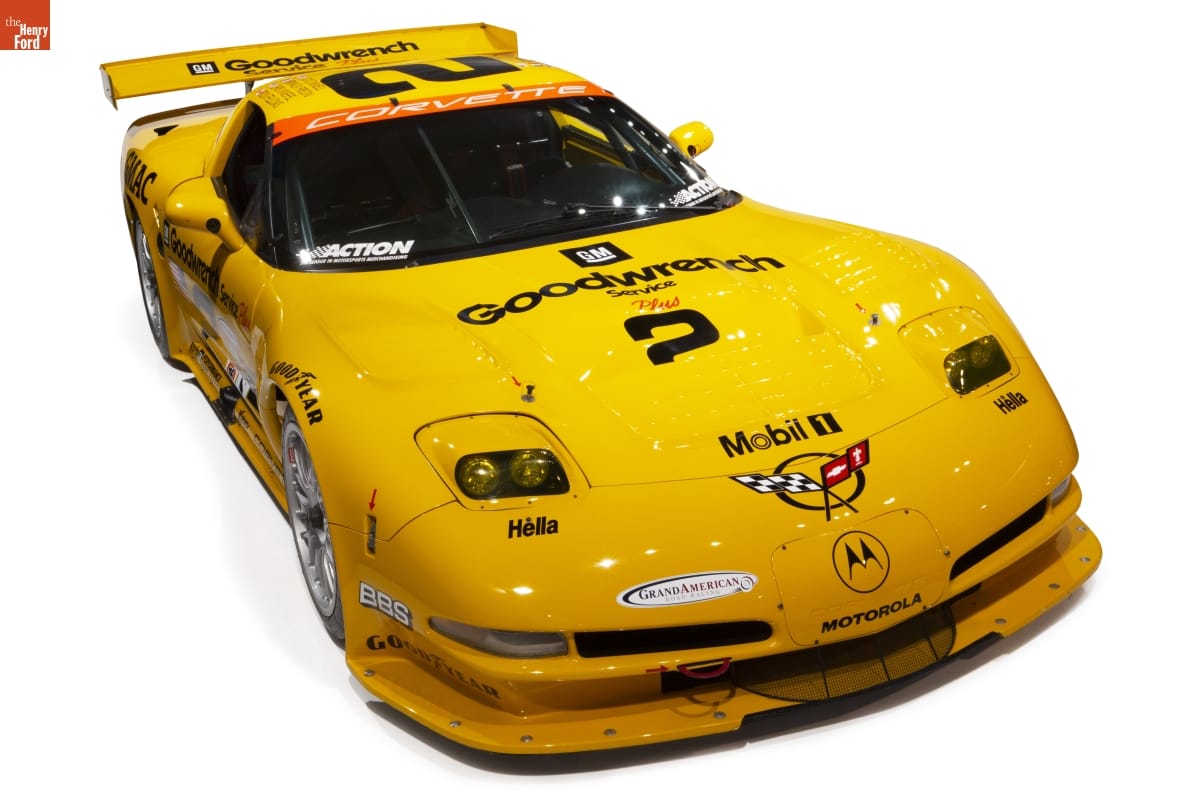 2001 C5-R Corvette, on loan from General Motors Heritage Center and currently on exhibit in Driven to Win: Racing in America in Henry Ford Museum of American Innovation. / THF185966

This specific car raced 17 times from August 2000 through June 2002 with 10 wins. It brought home the first win for the factory Corvette Racing program—Texas 2000 in the ALMS’ GTS class. Then it went on to become 2001 overall winner at Rolex 24, which was quite an accomplishment for a GT car. The car went on to win its class at Le Mans 24 in both 2001 and 2002. The modern era of Corvette’s factory racing program continues today, after over 20 years and 4 generations (C5/C6/C7/C8).

The success of this C5-R essentially started it all and we are proud to have it on display.

General Motors' donation of the 2016 GM First-Generation Self-Driving Test Vehicle was our first self-driving car acquisition. Why was it important to have this car join more than 300 others—including GM landmarks like the 1927 LaSalle and the 1997 EV1 Electric—in the collections of The Henry Ford?

This vehicle represents a huge step forward on the journey to fully autonomous driving. With Cruise, our majority-owned subsidiary, we’re determined to commercialize safe, autonomous, and electric vehicles on our way to a driverless future—one with zero crashes. 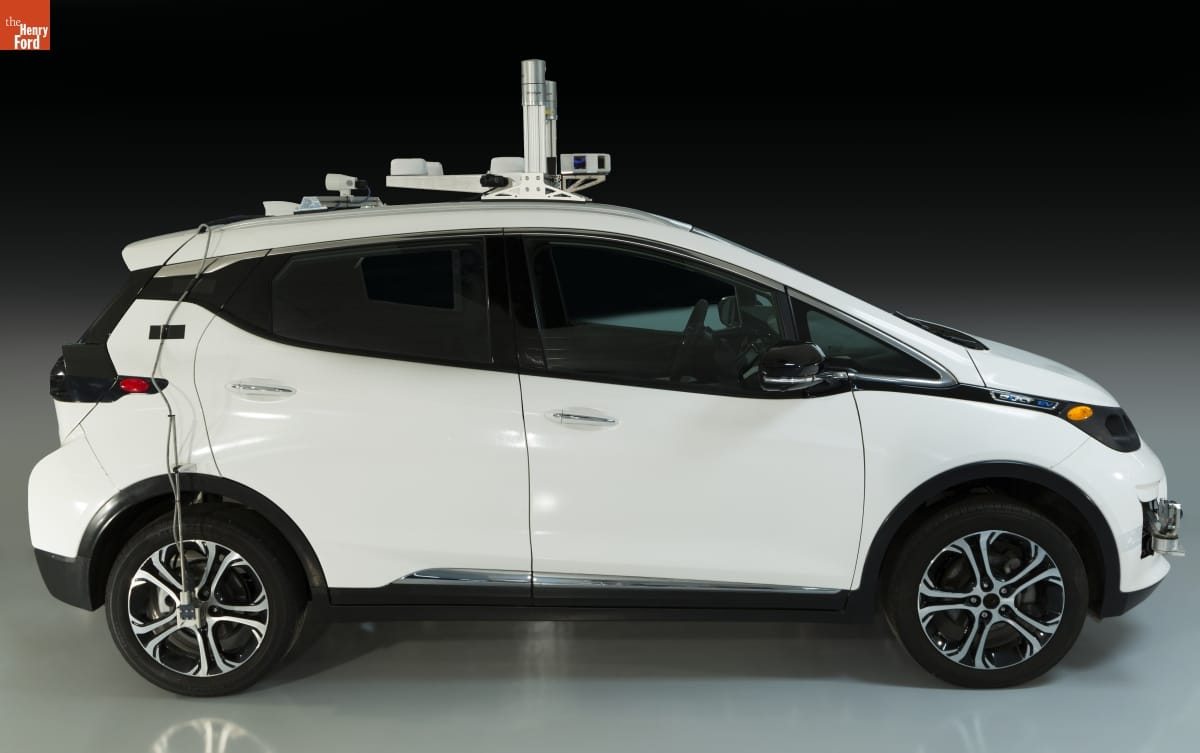 General Motors tested a series of autonomous vehicles in San Francisco, California, and Scottsdale, Arizona, in 2016. These cars used a combination of cameras, radar and lidar sensors, cellular and GPS antennas, and powerful computers to drive themselves on public streets in both cities. GM donated this one, now on exhibit in Driving America in Henry Ford Museum of American Innovation, to The Henry Ford in 2018. / THF173551

Cruise was the first AV company permitted to give rides to the public in its current driverless vehicles in the San Francisco area. Expansion of our real-world test fleet will help ensure that our self-driving vehicles meet the same strict standards for safety and quality that we build into all of our vehicles.

GM became the first company to assemble self-driving test vehicles in a mass-production facility when its next generation of self-driving Chevrolet Bolt EV test vehicles began rolling off of the line at Orion Township, Michigan, in January 2017.

The self-driving Chevrolet Bolt EVs feature an array of equipment, including LIDAR, cameras, sensors, and other hardware designed to accelerate development of a safe and reliable fully autonomous vehicle.

Reshaping cities and the lives of those who live in them has tremendous societal implications. Since we believe that all AVs will be EVs, these efforts will clearly advance our vision of zero crashes, zero emissions, and zero congestion, and help us build a more sustainable and accessible world.

This vehicle was really the first of its kind and its display is a sneak peek at the future of autonomy.

By 2025, General Motors plans to offer more than 30 electric vehicles globally. What does an all-electric future look like for Generation E?

For electric vehicles to make an impact, we need consumers to embrace them in mass numbers. So earlier this year, General Motors introduced the world to EVerybody In.

This is our brand commitment toward advancing a world with zero crashes, zero emissions, and zero congestion. EVerybody In is more than a brand campaign, it's a global call to action for everybody to join us on the road to an all-electric future. 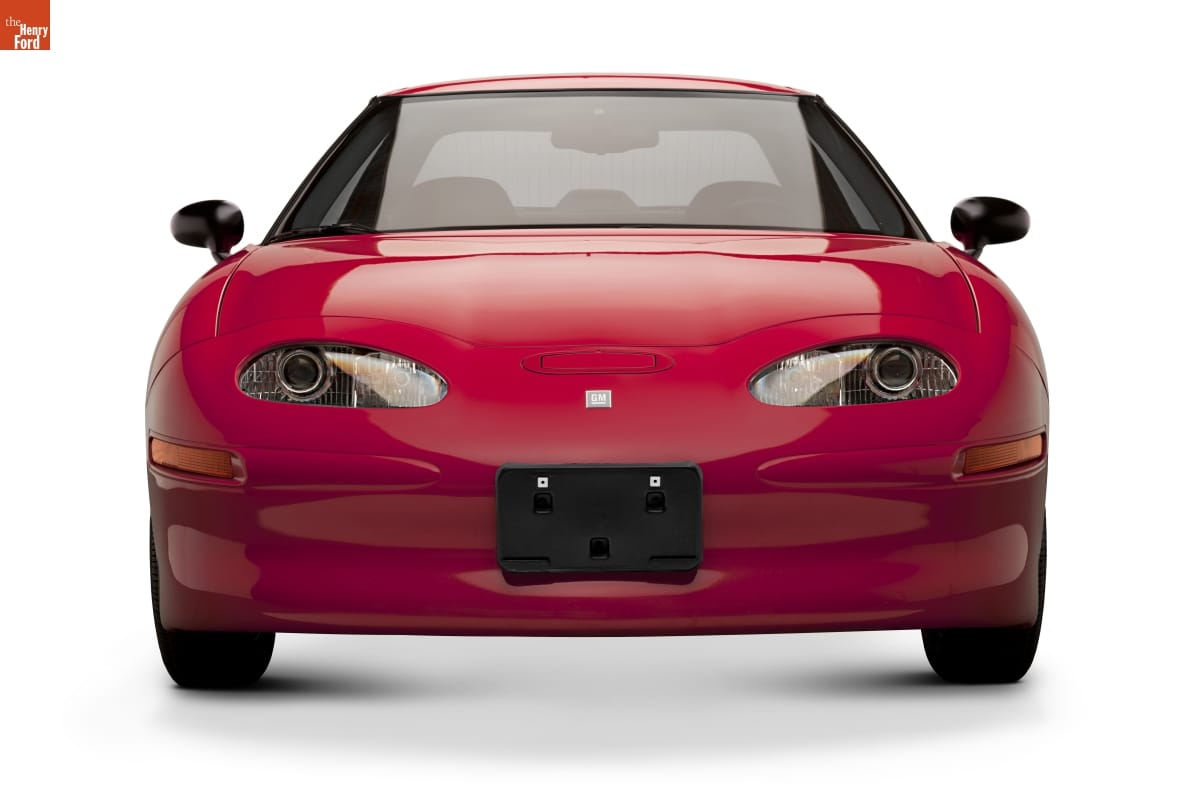 GM introduced the EV1 in 1997. It was among the most sophisticated electric cars built during the 20th century. / THF91060

GM wants to put everyone in an EV. Thanks to Ultium, our EV architecture, GM is able to reimagine the vehicles it produces today as electric vehicles with equivalent power, excellent range, and a manufacturing cost different that is expected to diminish as EV production increases.

Not only will our EVs be fun to drive and cost less to own, they will also provide an outstanding customer experience. This is how we will encourage and inspire mass consumer adoption of EVs. GM has the technology, talent, scale, and manufacturing expertise to do it.

The all-electric future we are creating goes beyond our vehicles, it is inspiring us to do even more to help mitigate the effects of climate change. We plan to source 100 percent renewable energy to power our U.S. sites by 2025, and to become carbon neutral in our global vehicles and operations by 2040.

General Motors wants to impact society in a positive way and these are some of the steps we are taking to make it happen.

General Motors is committed to electrification—what types of current EV projects from the company might we expect to see in the museums of tomorrow?

With more than 30 EVs being introduced by 2025, we have a lot of exciting vehicles coming. From sedans, to trucks, to full-size SUVs, we will have a wide range of offerings in terms of size and design.

We are entering an inflection point in the transportation industry, a transformation the industry has not seen in decades—the mass adoption of electric vehicles. The first of any of these entries will be a sight to see in the museums of tomorrow for generations to come.


Lish Dorset is Marketing Manager, Non-Admission Products, at The Henry Ford. Todd Christensen is Strategy and Operations Manager, Chevrolet Motorsports Marketing & Activation, and Gina Peera is Corporate Strategy and Executive Communications at General Motors. General Motors is a global automotive manufacturer, driving the world forward with the goal to deliver world-class customer experiences at every touchpoint and doing so on a foundation of trust and transparency. See Collecting Mobility for yourself in Henry Ford Museum of American Innovation from October 23, 2021, through January 2, 2022.