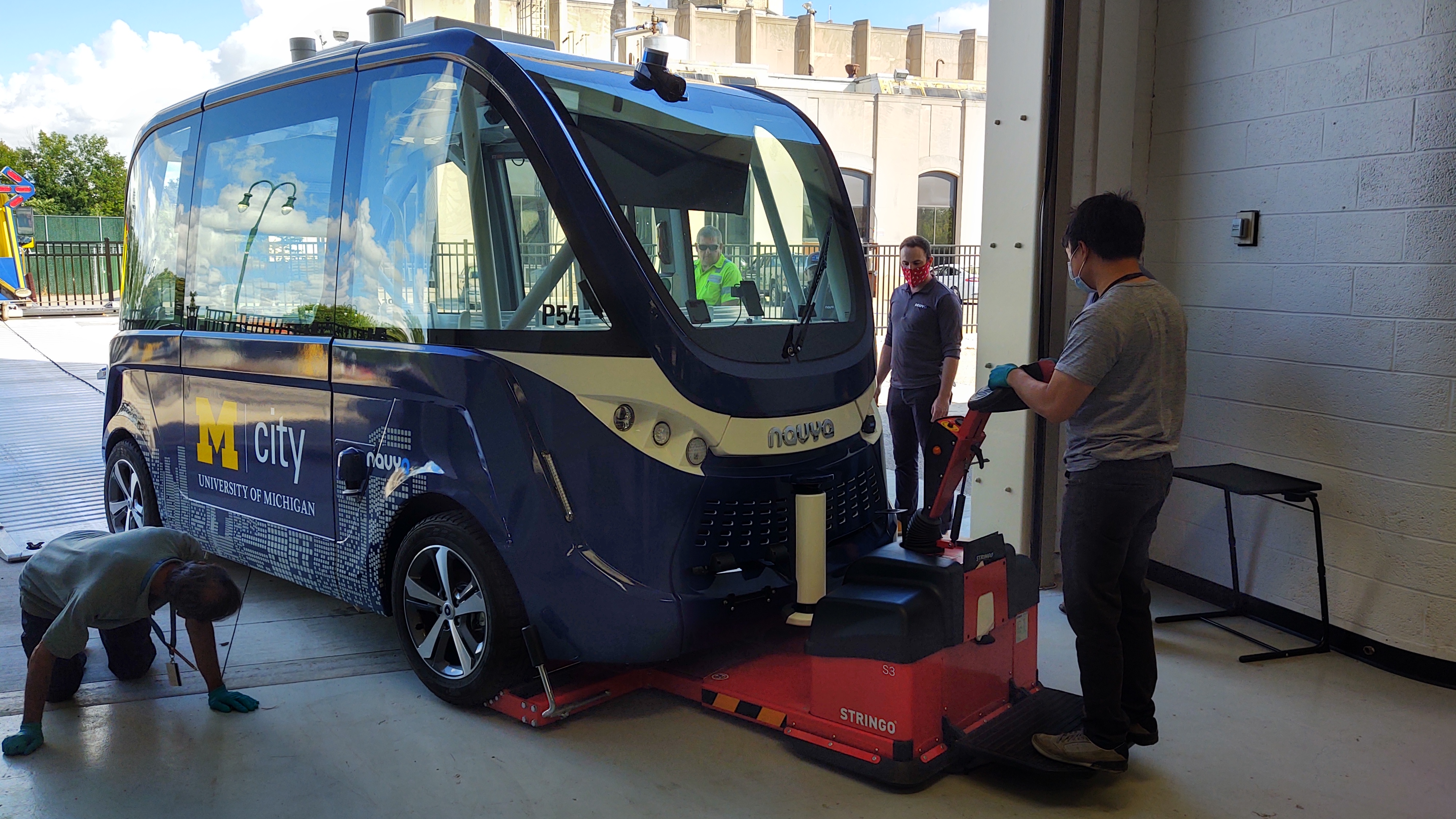 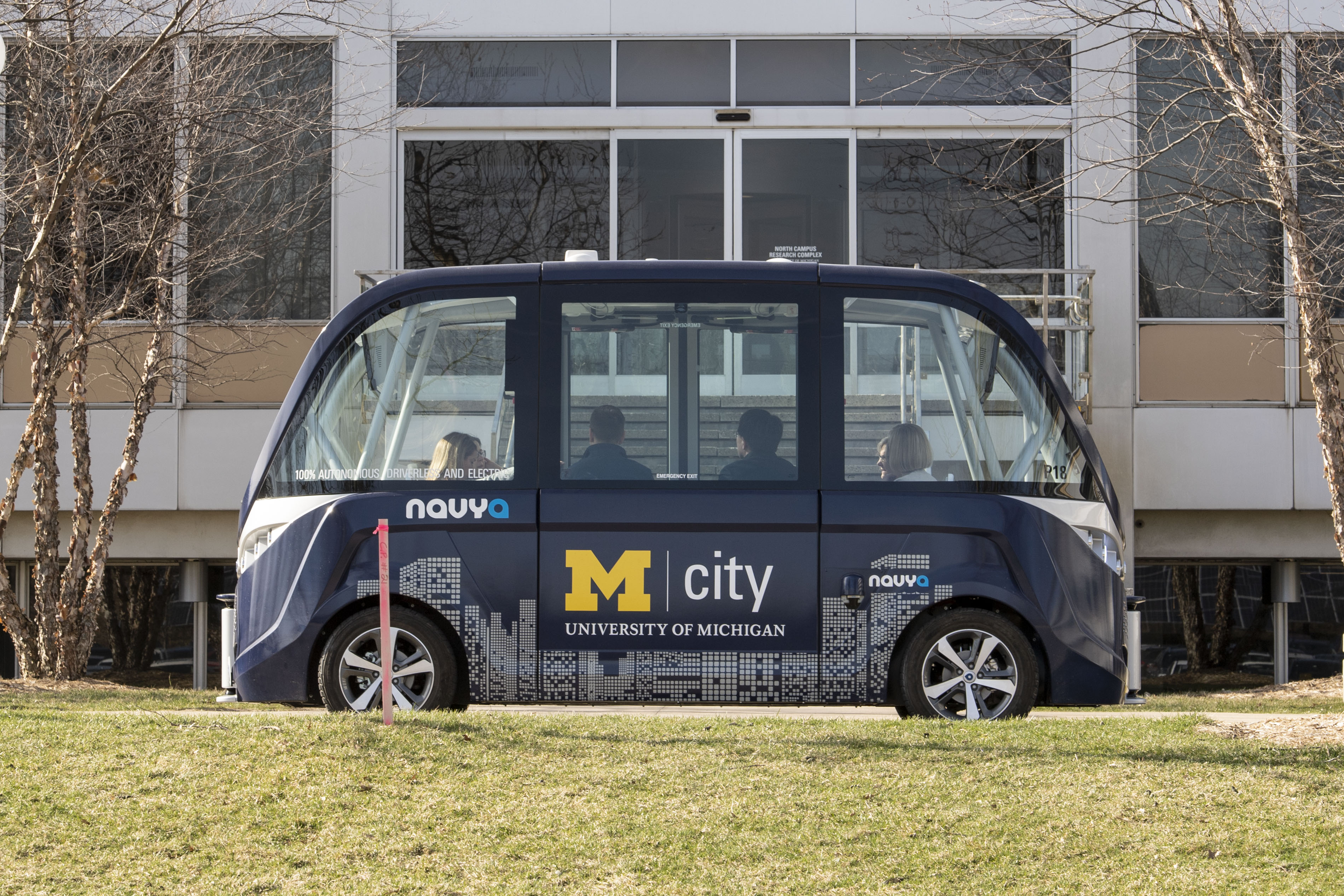 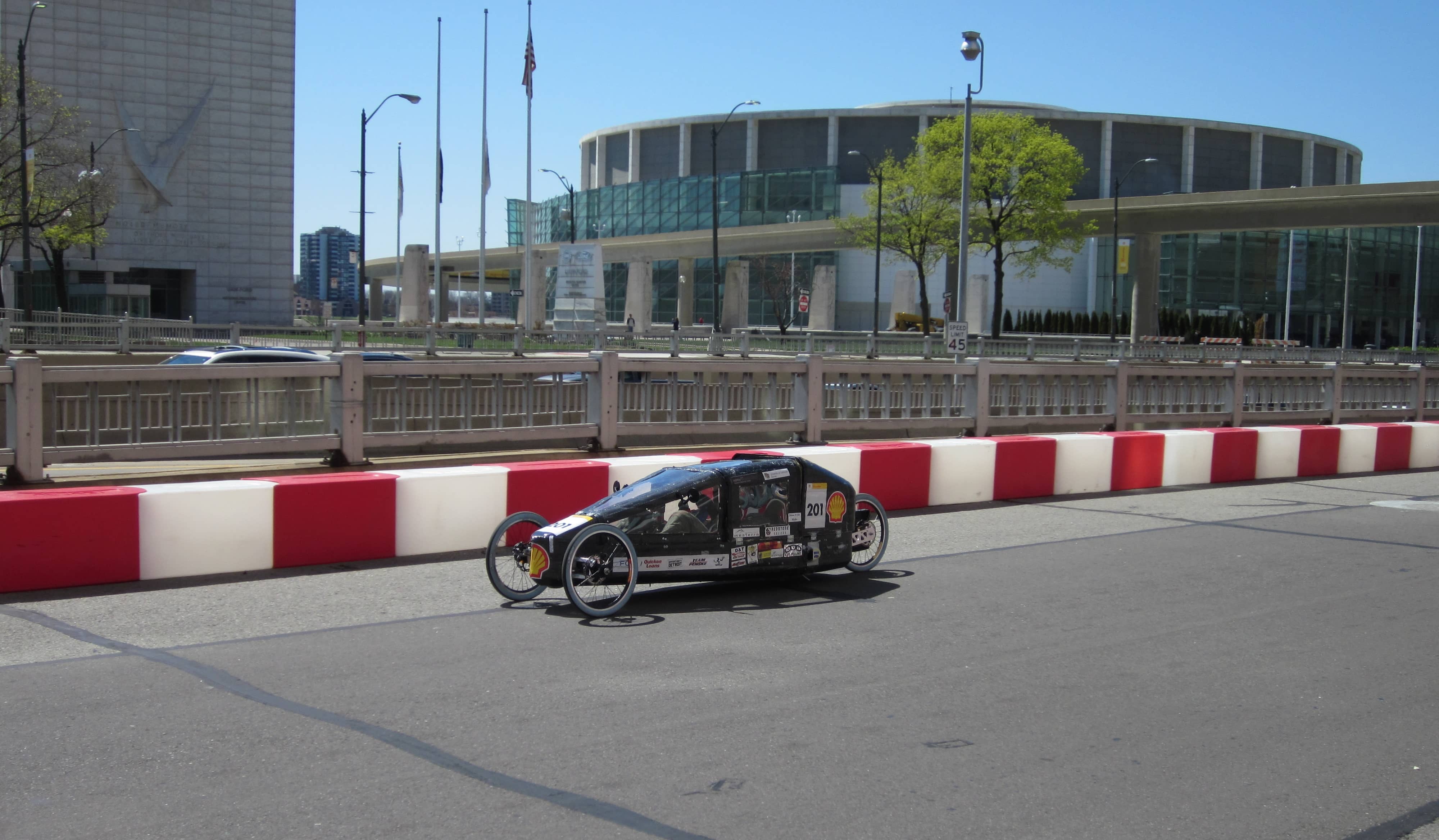 The gas mileage in our cars is nothing to sneeze at these days. The average for all new light-duty vehicles sold in the United States is around 25 miles per gallon. Buy a gas/electric hybrid like the Toyota Prius or the Chevrolet Volt and the equivalent mileage jumps to about 60. Go with the all-electric Tesla Model S and you’re looking at an equivalent of almost 90 miles per gallon. Good numbers, but you’d have to multiply them by ten to be taken seriously at the Shell Eco-marathon Americas.

For the second year in a row, Shell brought its super-mileage competition to Detroit. More than 1,000 students on 124 teams from high schools and colleges throughout the Western Hemisphere gathered in the Motor City April 22-24 to compete toward a simple goal: to tease as much mileage out of a gallon of gasoline (or its equivalent) as possible. 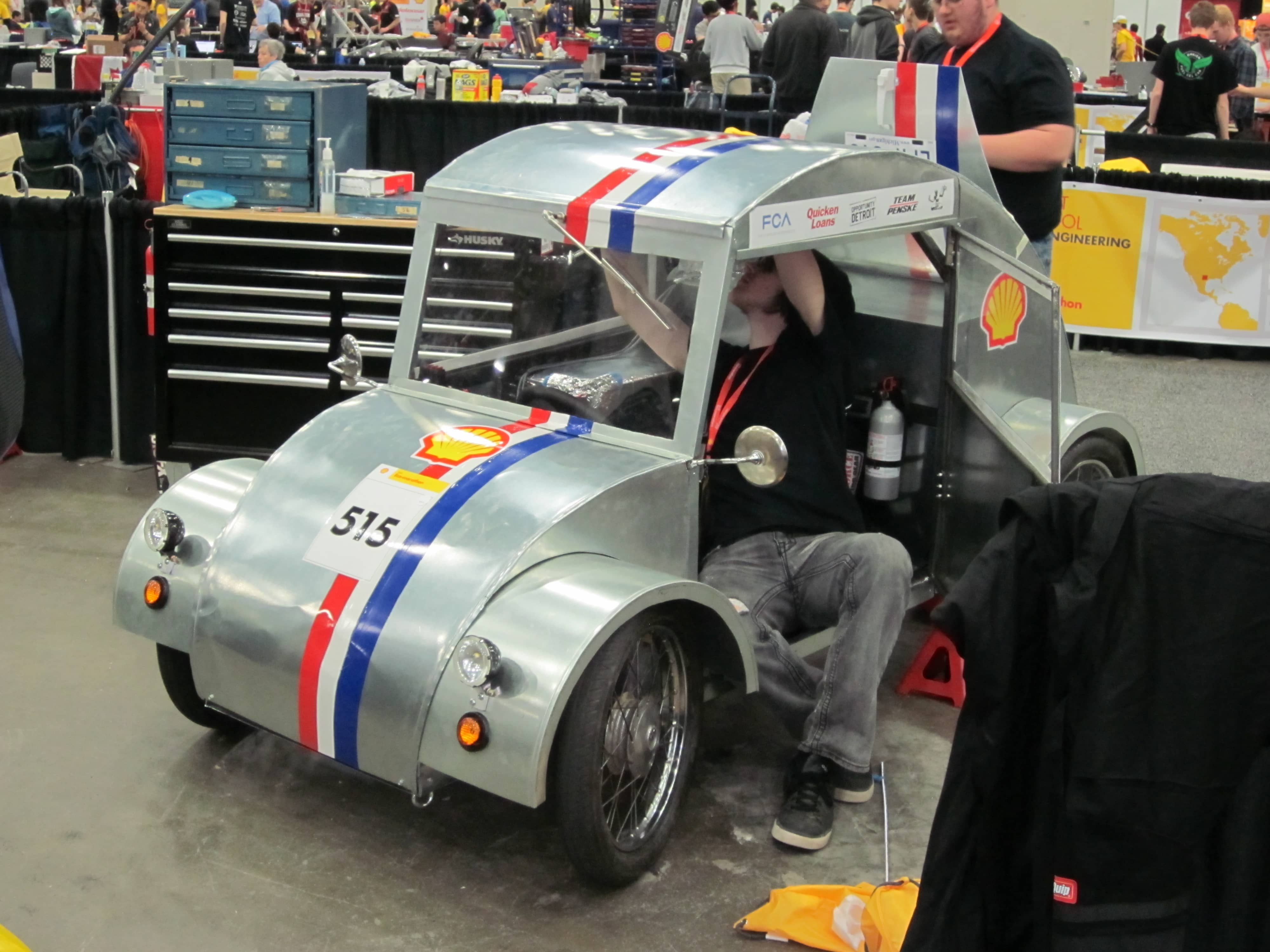 Students from Michigan’s Lapeer County Education and Technology Center are fans of The Love Bug, judging by their Urban Concept vehicle.

If you’re fan of The Henry Ford’s Innovation Nation, then you might recall that the competition was featured in the show. Cars compete in two classes. The Prototypes are stripped-down, highly aerodynamic designs, while the Urban Concept vehicles look a bit more like production cars. Teams may use either internal combustion engines (fueled by gasoline, diesel, natural gas or ethanol) or electric motors (fed by lithium-based batteries or hydrogen fuel cells.) This year’s overall winner was Université Laval of Quebec City with 2,584 miles per gallon. Fellow Canadians from the University of Toronto weren’t far behind with 2,364. California Polytechnic State University rounded out the podium with 1,125. (Complete results are available here.)

How do teams achieve these extraordinary numbers? Streamlined shapes and lightweight materials are big parts of the equation, but the teams also shut off their engines and coast as much as possible along the 0.6-mile course laid out through downtown Detroit. But competing vehicles have to maintain an average speed of at least 15 miles per hour over ten laps, so they can’t rely too heavily on momentum. 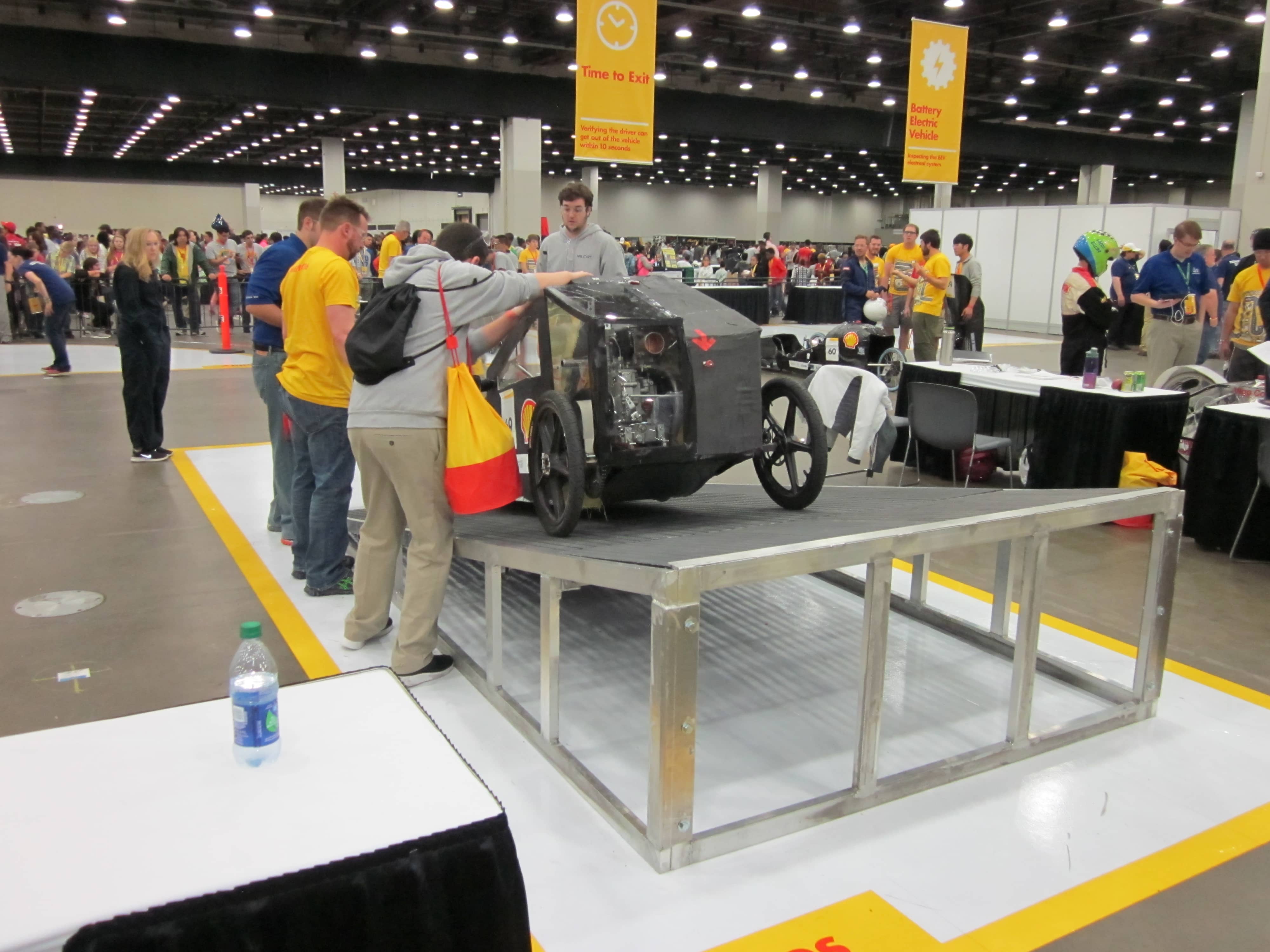 Inspection is rigorous. Many teams struggle with the brake test, in which their car’s brakes must hold the vehicle (with driver) perfectly still on a 20-percent grade.

It’s an all-in commitment for the students. Teams began arriving in Detroit on Tuesday, and most of them stayed in tents set up on Cobo Center’s lower level. If they weren’t sleeping or competing on the track, odds are that the students were working on their cars in the paddocks that covered much of Cobo’s main hall. Each vehicle has to pass a rigorous safety and compliance inspection before it’s allowed on the track, so there’s always fine-tuning to be done. 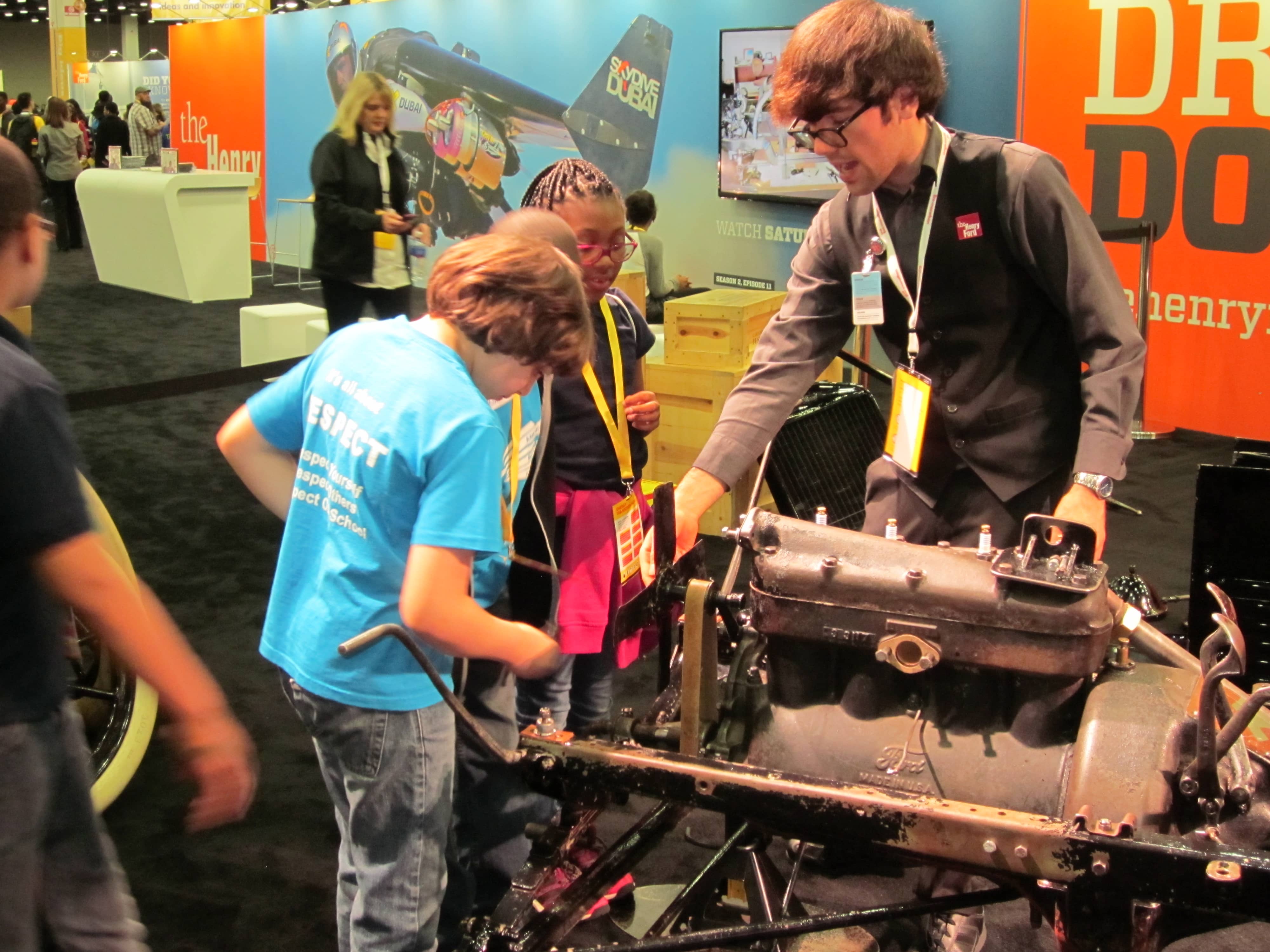 Everybody loves to build a Model T.

In addition to the competition, there were many other attractions for the public to enjoy. The Henry Ford was pleased to have a presence in Cobo Center alongside the Michigan Science Center, the MotorCities National Heritage Area, FCA and other organizations. We brought two of our signature experiences – the “Build a Model T” activity and the operating replica of Henry Ford’s Kitchen Sink Engine – along with the replica of the 1896 Quadricycle and the 102.5 mile-per-gallon Edison2 X Prize car. We also brought several auto-related clips from The Henry Ford’s Innovation Nation to inspire the teams and event visitors alike.

On Saturday, I was privileged to moderate a panel discussion with students and staff from Maxwell High School of Technology in Lawrenceville, Georgia. The group won the grand prize in Quaker State’s 2015 Best in Class Challenge, in which they had six weeks to turn a plain-vanilla 2003 Chevrolet Impala into a head-turning street machine. The competition, with its tight time and money restrictions, gave the students a new appreciation for teamwork – not unlike the cooperation that is so crucial to Eco-marathon teams.

The Shell Eco-marathon Americas will be back in Detroit in 2017. If you missed the event this year, be sure to get to Cobo Center next time to enjoy one of the most exciting and innovative motor vehicle challenges around.