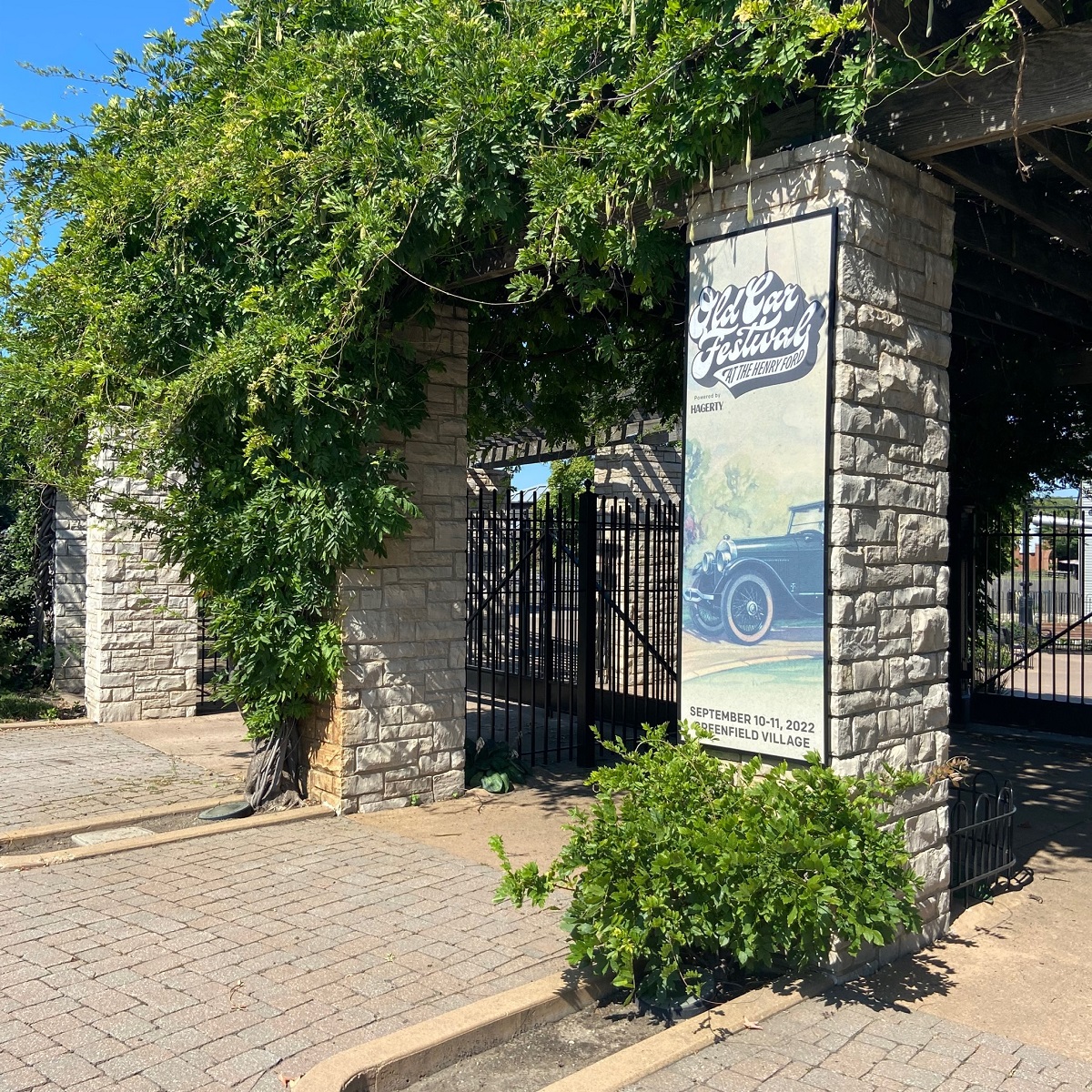 We observed a beloved late-summer tradition September 10–11, 2022, with Old Car Festival, our annual celebration of automobiles built between the 1890s and 1932. First held in 1951, Old Car Festival is the longest-running antique automobile show in the United States. (Though we should probably put an asterisk on that, thanks to 2020, when Old Car Festival—like most events—was canceled.) 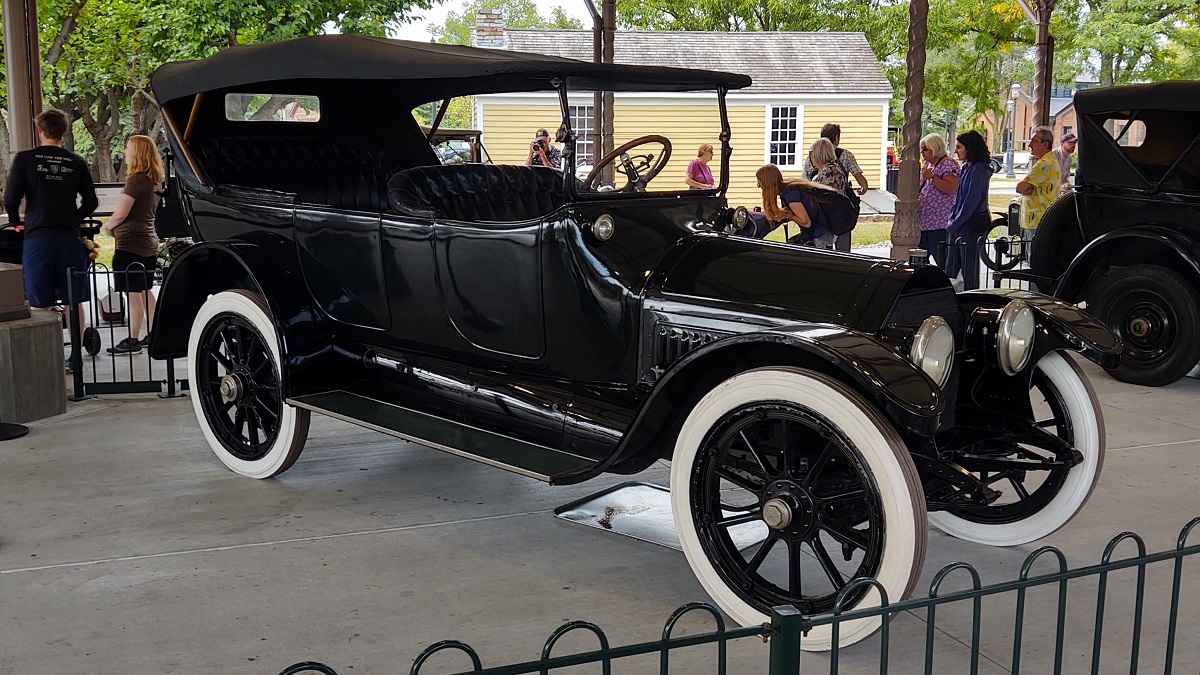 Luxury was often synonymous with a higher cylinder count. Cadillac delivered with this 1915 V-8 touring car. / Photo by Matt Anderson

Each year, we turn our spotlight on a special make, model, individual, or theme. February 2022 brought the 100th anniversary of Ford Motor Company’s acquisition of Lincoln Motor Company, so it seemed fitting to feature the broader subject of “Early American Luxury.” (We’d already celebrated Lincoln specifically at this year’s Motor Muster.) Certainly, this theme includes Lincoln, but it also encompasses names like Packard, Cadillac, LaSalle, Pierce-Arrow, and Peerless. These are the marques that defined the very term “luxury car” in the early decades of the 20th century. 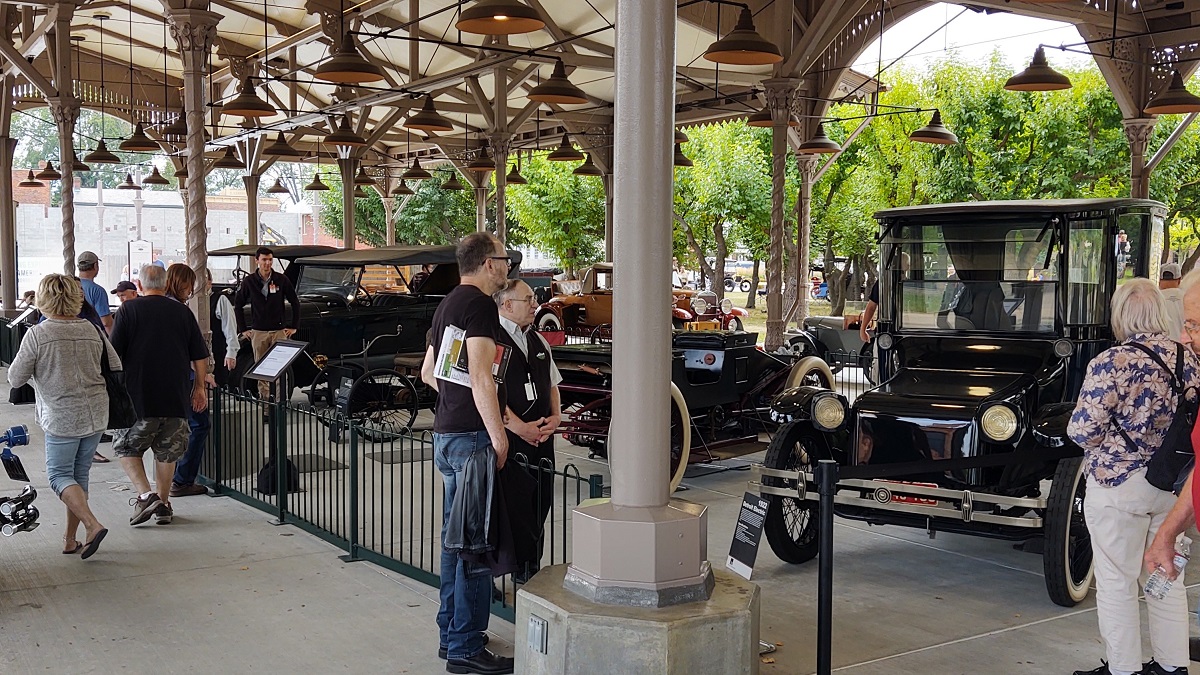 Detroit Central Market housed a selection of luxury vehicles from show participants and from The Henry Ford’s own collection. / Photo by Matt Anderson

This year was our first opportunity to incorporate the Detroit Central Market building into Old Car Festival activities. We took advantage of the spacious new structure to show select upmarket American cars drawn from show participants and from The Henry Ford’s own collection. Among the museum’s cars on view were a 1915 Cadillac Type 51 touring car, representing the first mass-produced V-8 automobile, and a 1923 Lincoln Model L touring car that once belonged to Thomas Edison. We also showed our 1922 Detroit Electric coupe. The little coupe might not have seemed so impressive alongside the big touring cars, but there was a time when electric automobiles were purposely marketed to well-to-do women. 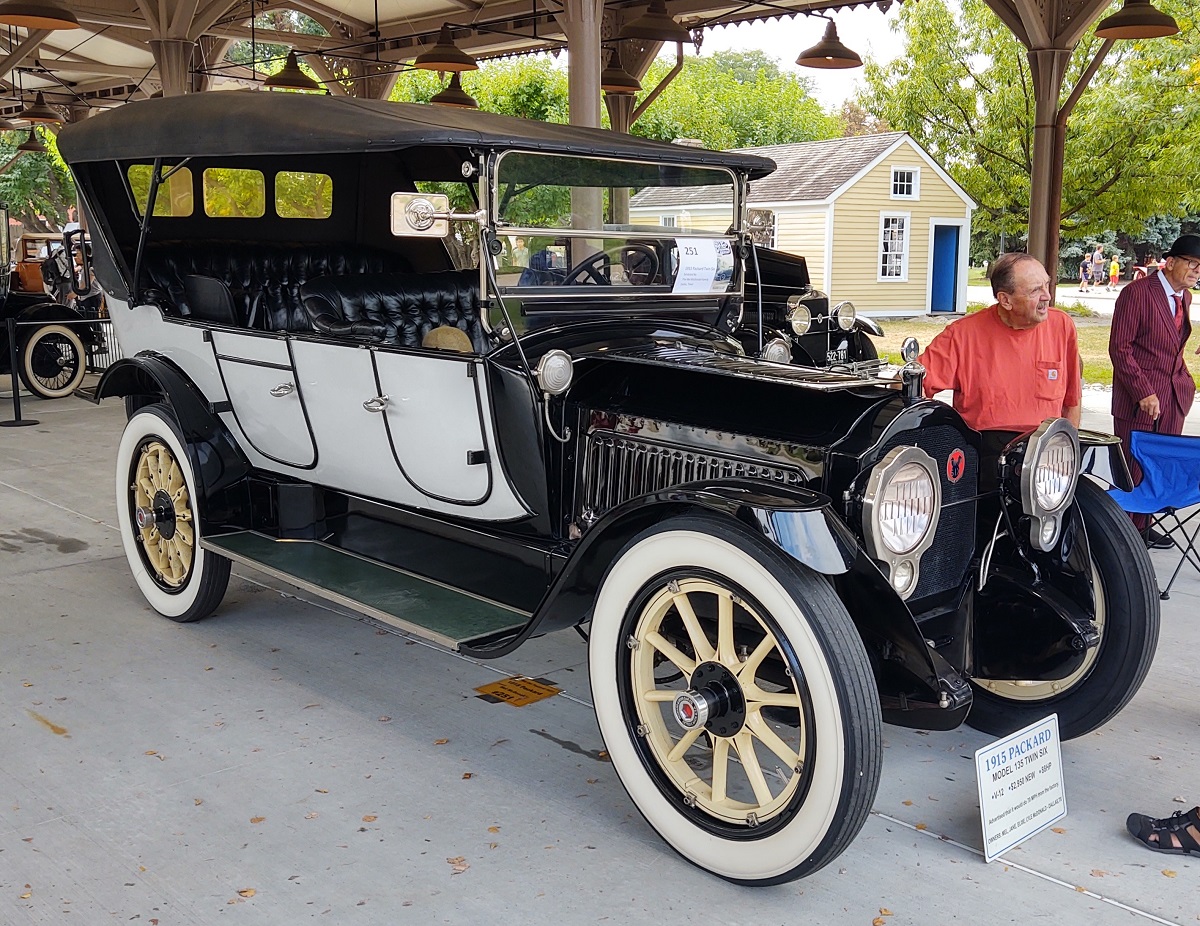 Several magnificent participant cars rounded out our Central Market display. From Packard, we had a 1915 Twin Six touring car and a 1927 Series 626 sedan. From Franklin, we had a 1931 Series 151 sedan. Auburn—part of E.L. Cord’s Auburn-Cord-Duesenberg empire—was represented by a pair of beautiful 1929 models, including a cabriolet and one of the company’s beloved boat-tail speedsters. Our special exhibit wasn’t limited to exclusive marques. Luxury cars for customers of (relatively) more modest means were represented by a 1928 Studebaker President sedan and a 1930 LaSalle coupe. 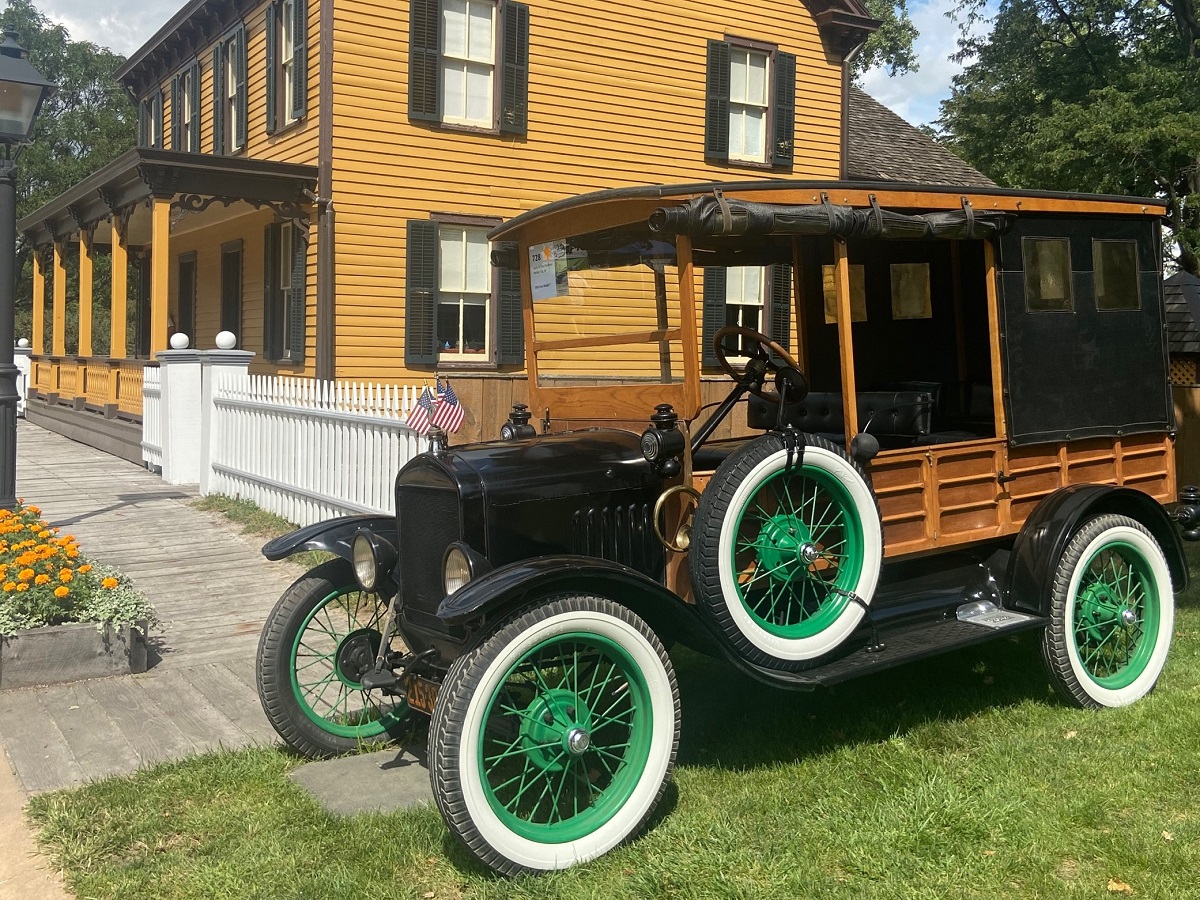 We had more than 730 vehicles registered for this year’s show. Automobiles, station wagons, trucks, bicycles, and even a few military vehicles were spread throughout Greenfield Village over the weekend. Visitors could enjoy the sights and sounds of a 1910s ragtime street fair along Washington Boulevard. They could attend a 1920s-era community garden party near Ackley Covered Bridge. They could watch the Canadian Model T assembly team put together a Ford automobile in mere minutes. Or they could hear about wartime struggles on the Western Front outside Cotswold Cottage. At the Ford Home, near the village entrance, Old Car Festival visitors could take in an exhibition of tractors and internal-combustion engines that took some of the backbreaking labor out of early-20th-century farming. For festival participants in a matrimonial mood, our friends at Hagerty arranged a Drive-Thru Vow Renewals experience. Registered show-car owners could drive their antique vehicles past the makeshift altar in front of Edison Illuminating Company’s Station A and “re-light” their nuptials. 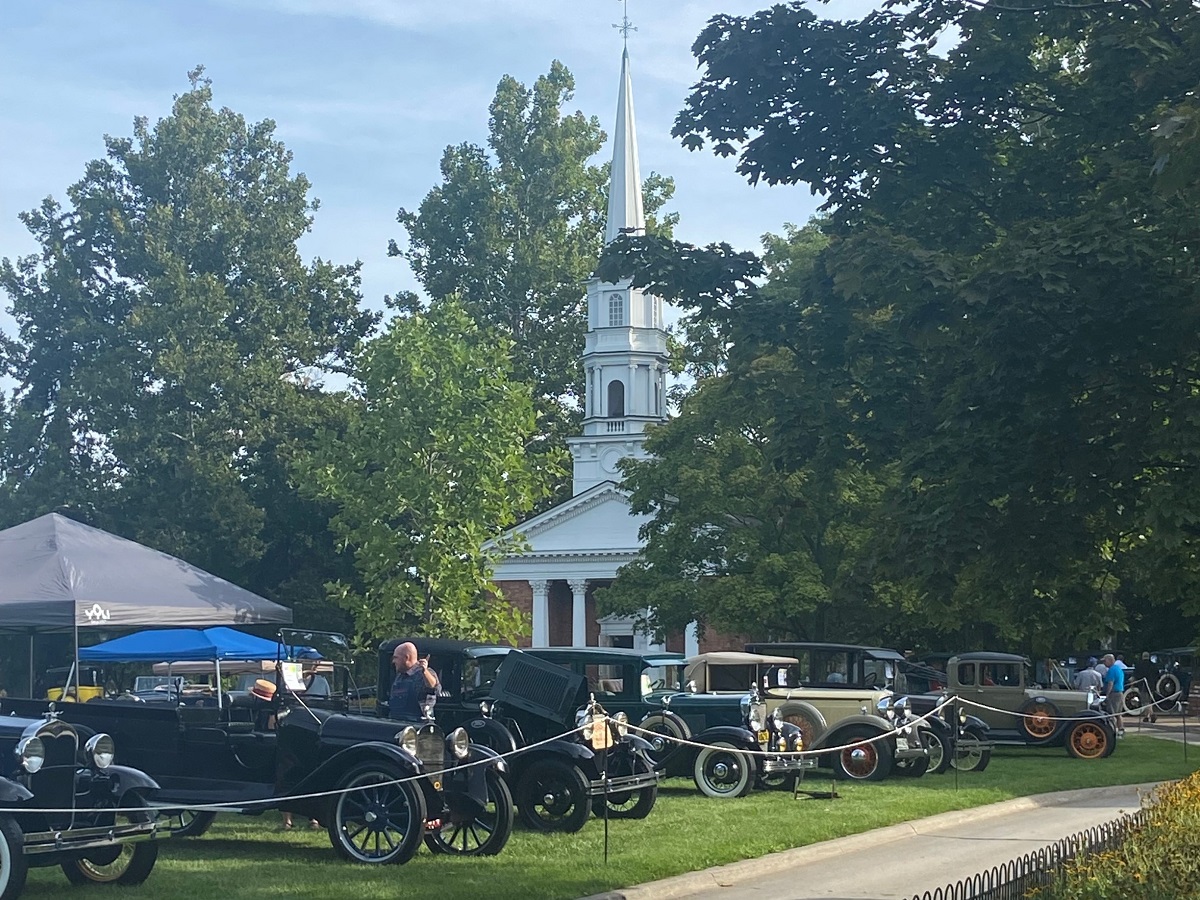 Martha-Mary Chapel provided an inspiring backdrop for cars on the Village Green. It also housed a series of special programs throughout the weekend. / Photo by RuAnne Phillips

Speaking of altars, Martha-Mary Chapel hosted several programs and presentations during Old Car Festival. Tom Cotter, author and host of the popular web series Barn Find Hunter, presented twice during the weekend. On Saturday, he went behind the scenes of his car-seeking show with “A Barn-Finding Life.” On Sunday, Cotter recalled the 3,000-mile journey chronicled in his book Ford Model T Coast to Coast. On both days, longtime festival participant Daniel Hershberger discussed early auto touring and roadside camping. Hershberger dedicated his talks to the memory of Randy Mason, a former curator of transportation at The Henry Ford who passed away earlier this year. Also on both days, historian Joseph Boggs looked at the fascinating relationship between automobiles and 1920s Prohibition. Cars factored into both sides of the equation—used by rumrunners and law enforcement officers alike.

Of special interest were two panel discussions on early American luxury cars, held on Saturday and Sunday. Through the generous support of the Margaret Dunning Foundation, we brought together three experts in the field: Bob Casey, retired curator of transportation at The Henry Ford; David Schultz, president of the Lincoln Owners Club; and Matt Short, former curator at the Auburn-Cord-Duesenberg Automobile Museum and former director of America’s Packard Museum. Our panelists discussed the innovators, manufacturers, and automobiles that defined luxury motoring into the 1930s. Their Sunday session was livestreamed and can be viewed here on The Henry Ford’s Facebook page. 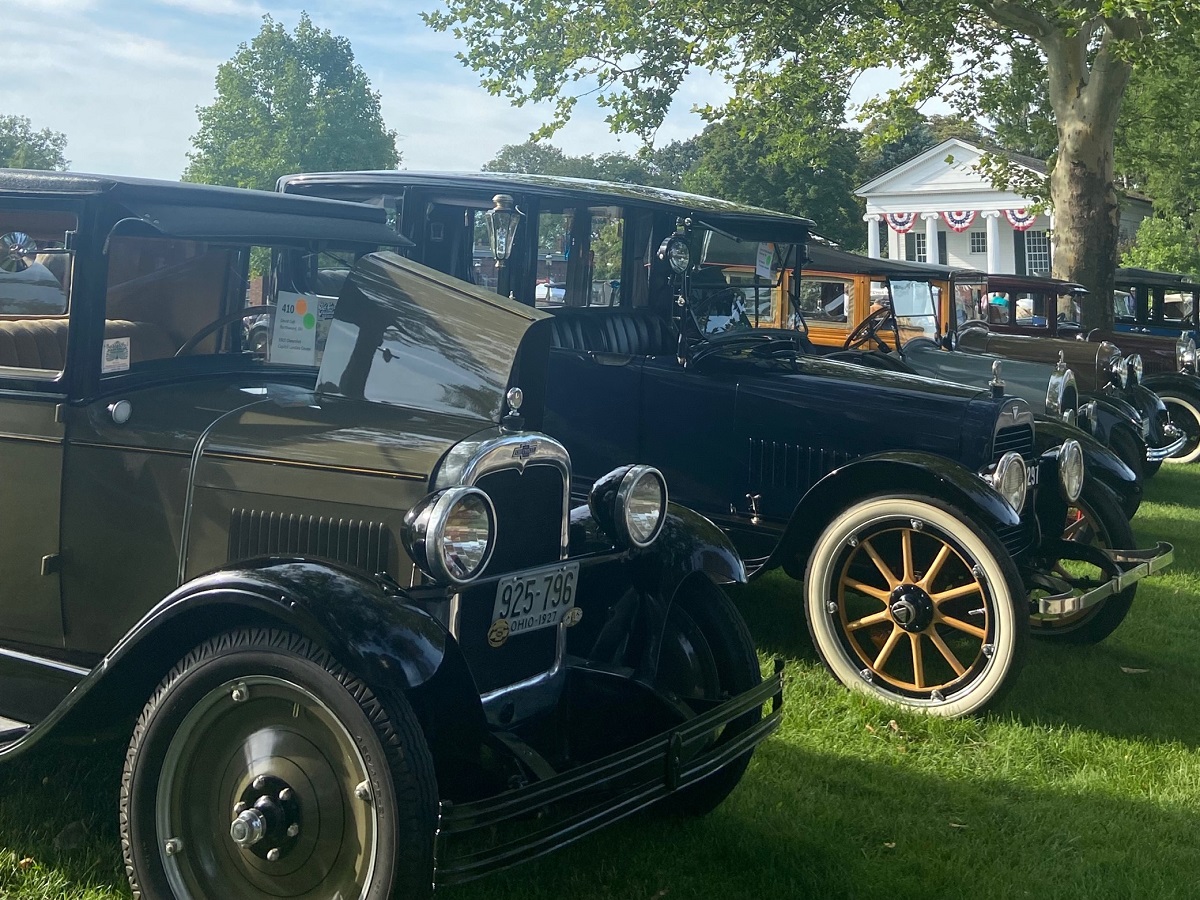 Select participating vehicles at Old Car Festival were judged for various class awards. From those winners, one grand champion was selected each day. / Photo by RuAnne Phillips

Visitors may not be aware of a special distinction (apart from chronology) that separates Old Car Festival from our Motor Muster show. Participants at Old Car Festival can choose to have their vehicles judged by a team of vintage-automobile experts. The judges determine Vehicle Class Awards based on authenticity, quality of the restoration work, and care with which each car is maintained. First-, second-, and third-place prizes are awarded in 11 different classes. One overall Grand Champion is selected on each day of the festival. Additionally, two Curator’s Choice Awards are presented to unrestored vehicles, and guests and participants are invited to vote for their favorites in the People’s Choice Awards. The full list of our 2022 award winners may be viewed here. 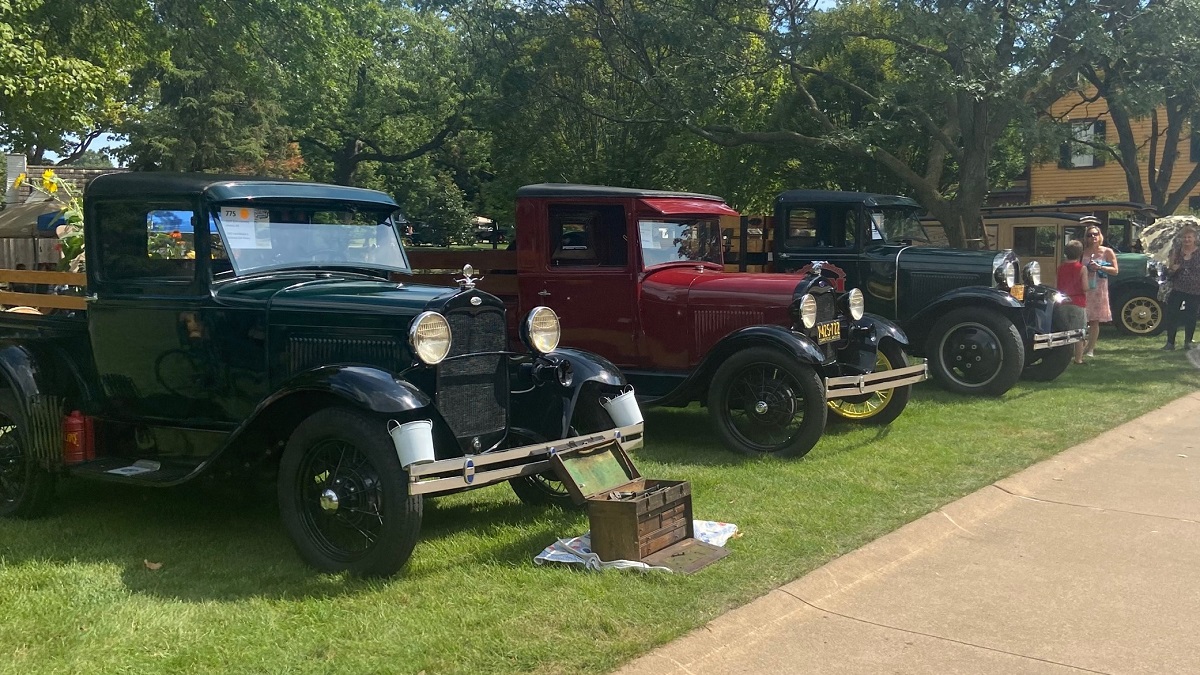 Great crowds, good weather, and impressive vehicles made for a perfect show in 2022. While it’s always hard to say goodbye to summer, Old Car Festival is certainly a fine way to do it. We look forward to next year’s event already.