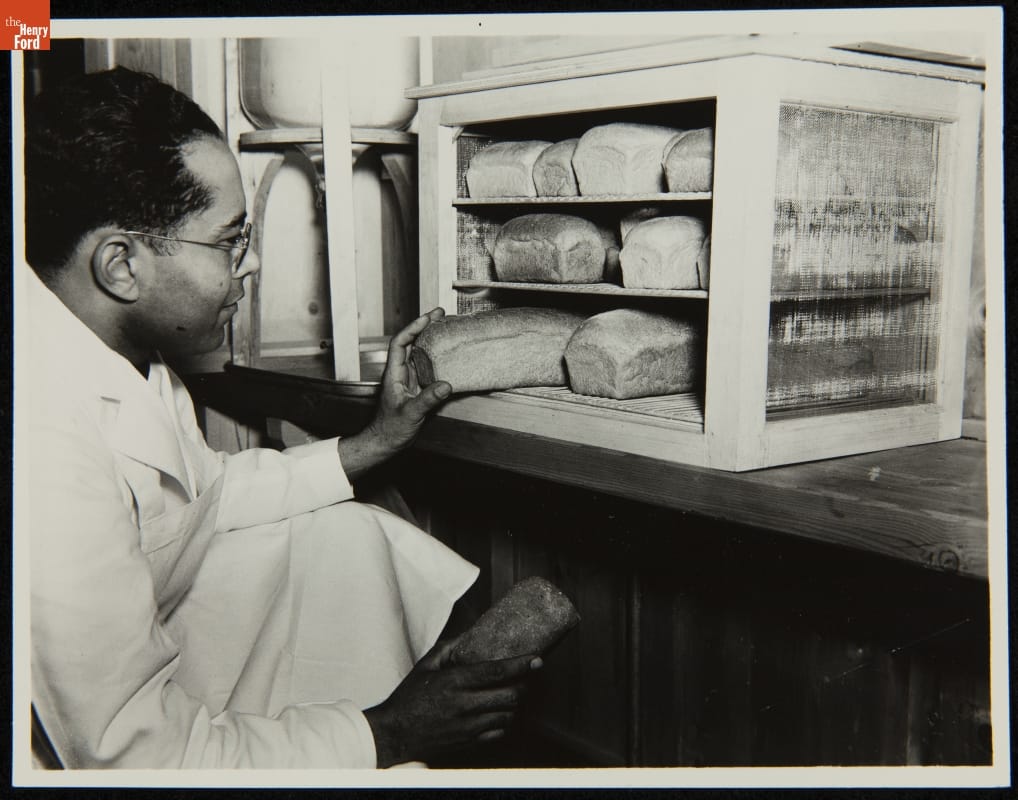 The Soybean Laboratory (now the Soybean Lab Agricultural Gallery) in Greenfield Village buzzed with activity during the 1930s and 1940s. Paul Hunter Foster worked as a waiter in that laboratory in its earliest days, but over time, his responsibilities expanded to include valet to Henry Ford and cook on Henry Ford’s private railroad car, Fair Lane. As these photographs indicate, he tested soy foods and may have fed the laboratory staff in the process.

Paul Hunter Foster was born on June 5, 1900, to a well-connected mixed-race family living in Meridian, Mississippi. His father, William Thomas Foster, sampled cotton and rated bales based on cotton quality. His mother, Alvina (“Vinie”/“Viny”) Lewis Hunter, bore seven and raised five children. Most of them pursued higher education and community service and flourished professionally. Three studied at Tougaloo College in Jackson, Mississippi. One graduated from Fisk University in Nashville, Tennessee, and another from Howard University in Washington, D.C. Two of Paul’s brothers became dentists, and another worked in race relations throughout his career.

Piecing together the details of Paul Foster’s life remains a work in progress, but primary sources confirm that he lived in Washington, D.C., after his father died in 1917. One of his brothers lived there at the time, attending Howard University. Paul worked as a messenger for the U.S. War Department during World War I (per his draft registration card). He was back in Meridian in January 1920 (per the U.S. Census). Then, on July 7, 1920, while still a student, he married Lilybel E. Scott in Detroit, and settled into life at 6081 Whitewood Avenue in Detroit. 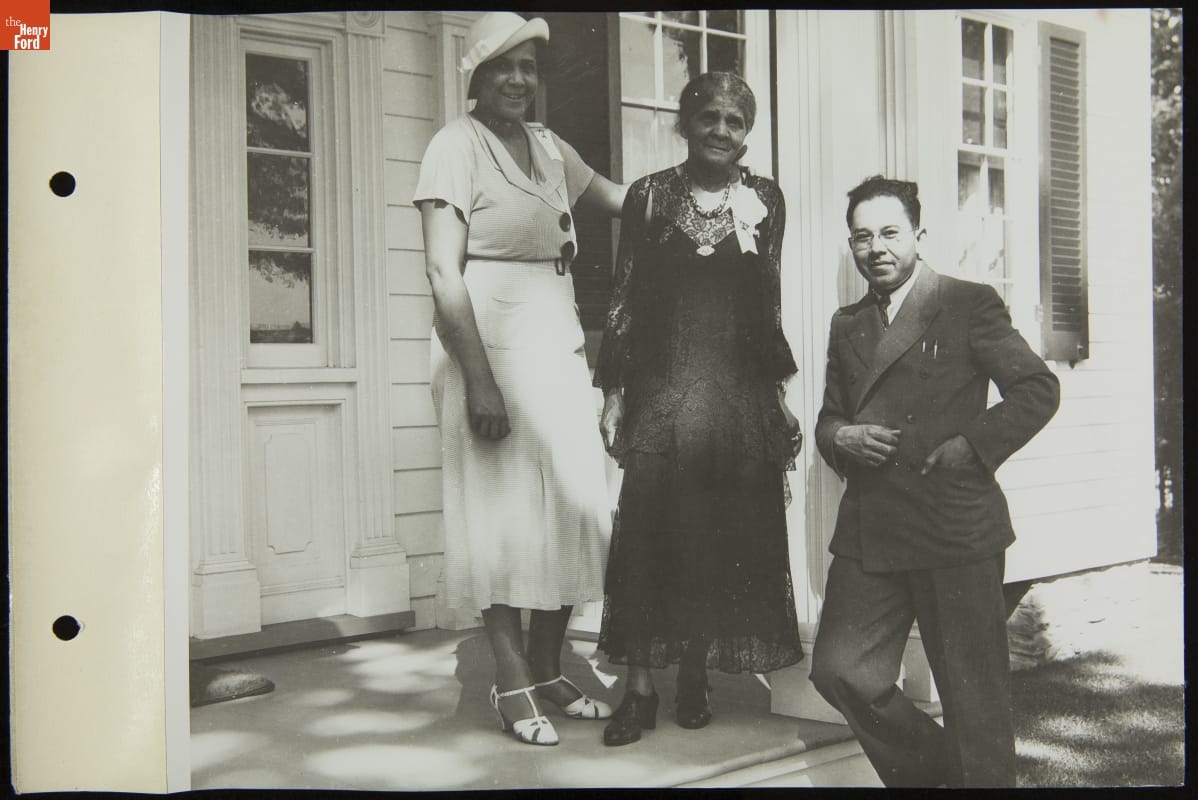 It remains unclear when Paul Foster joined Henry Ford’s staff, but his work in Greenfield Village and in proximity to Henry Ford’s office at Ford Motor Company’s Oakwood Boulevard headquarters translated into “other duties as assigned.” In 1935, this included escorting a special guest invited to the Stephen Foster Home dedication. A reporter from the Pittsburgh Courier explained on September 21, 1935, that Georgia Singleton Ralls had, as a child, lived in the house in Lawrenceville, Pennsylvania. She provided valuable information about the home interior to Henry Ford via Charles T. Newton. Ford invited her, but the Foster family ensured her personal comfort. She stayed with Paul and Lilybel and their four children during her visit. Ralls described Paul Foster as Henry Ford’s valet.

Detroit newspapers confirm that Paul and Lilybel Foster encouraged education, a love of music and theater, and civic engagement. Lilybel and the four children, Paul H. Foster, Jr., [William] Estus, Jane, and Harris, each received their share of coverage in the Michigan Chronicle social pages. This helped them forge networks with other middle-class Black Detroiters.

In addition, Paul Foster, Sr., developed relationships with other Black Detroiters working in industry. His eldest child, Paul, Jr., listed Bohn Aluminum as his employer on his World War II draft registration card,  and his second son, William Estus, listed Ford Motor Company. The elder Foster also listed Ford Motor Company, Oakwood Boulevard, as his employer. The sons listed their mother as the person most likely to know their permanent addresses, but Paul, Sr., listed Frank Davis, a field agent for Detroit Light Company (Detroit Edison Company), instead of his wife. This likely reflected a commitment to class and racial bonds among well-connected Black Detroiters employed in managerial positions by white business owner-operators. Frank Dewitt Davis became the first Black employee in an office position at Detroit Edison according to his obituary (published in the Detroit Free Press, September 19, 1974).

Work in the Soybean Lab

The following provides a snapshot of the chemical laboratory that Henry Ford constructed in Greenfield Village during 1929, and the workspace that Paul Hunter Foster, Sr., occupied.

Henry Ford invested in the chemical laboratory to discover industrial uses of agricultural products. Soybeans, a crop with a long history, became the research focus by 1931. The crop offered much potential. Extracted oil could be refined for multiple uses and the bean residue could be pressed into numerous molded forms. The protein- and oil-rich soybean also addressed the need of many seeking healthier foodstuffs. 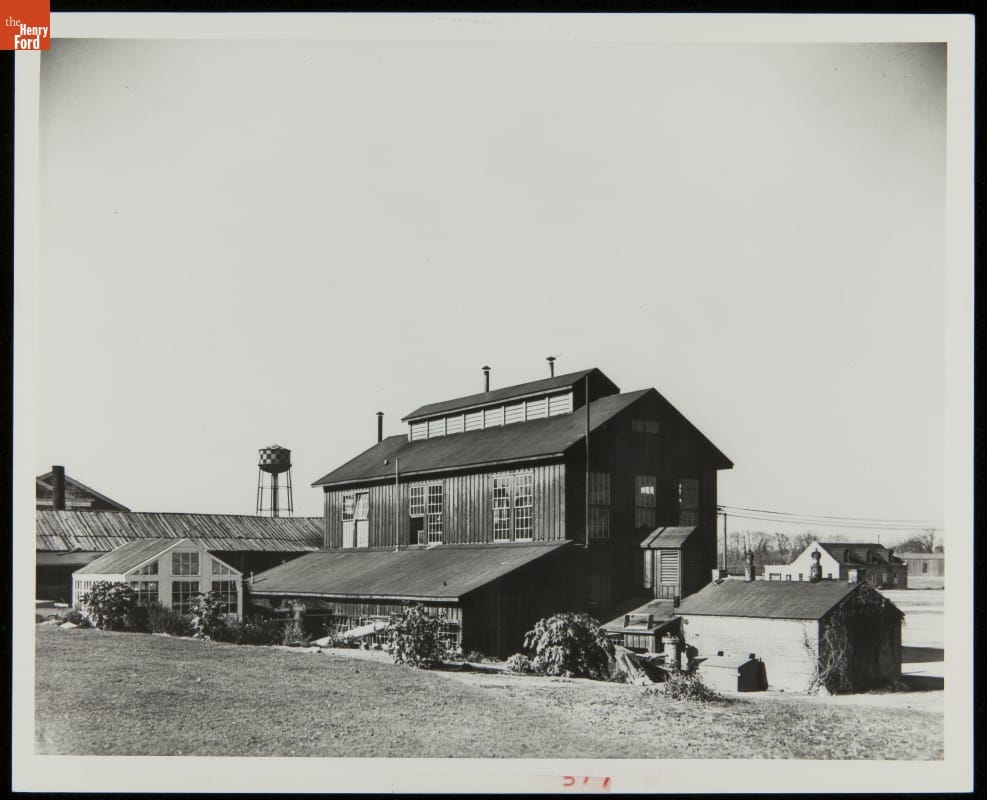 Foster worked in the lab that undertook food experiments during this early period of exploration and innovation. His workspace consisted of the low-roofed kitchen shown below, divided by a railing. The preparation area included ingredients, storage containers, scales and other data collection instruments, and scientific apparatuses to facilitate testing. 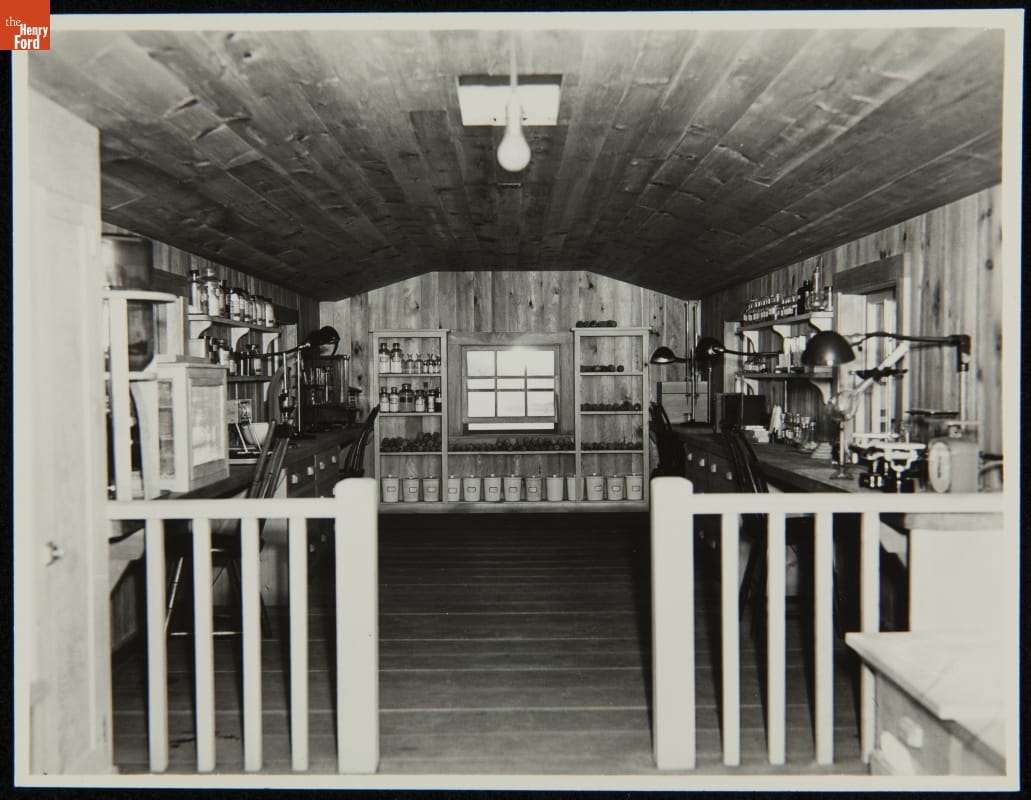 Preparation and testing area of the kitchen laboratory at the Soybean Laboratory in Greenfield Village, Dearborn, Michigan, circa 1935. / THF236497

Staff worked together in this testing kitchen. The photograph below shows Foster at work in the foreground, and another lab technician busy in the background. 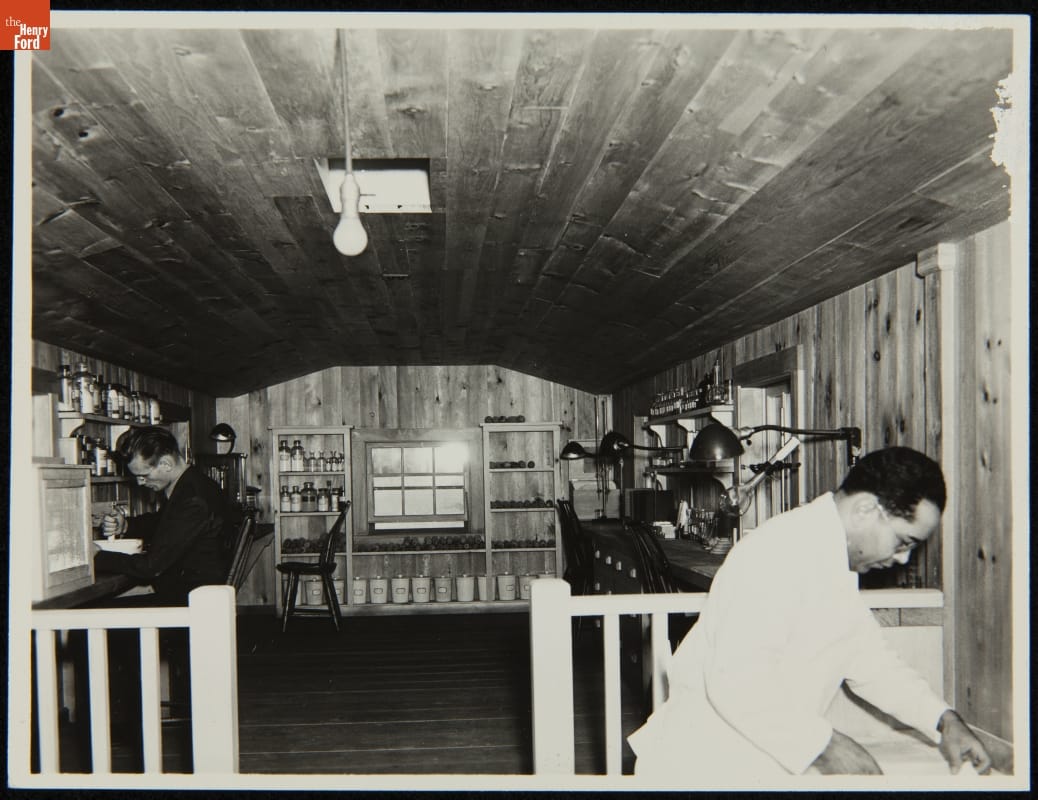 The cooking area in the kitchen laboratory included a range, a sink, and counter space, as well as measuring cups, pots, pans, and other kitchen implements. It was at a slightly lower level than the preparation area. 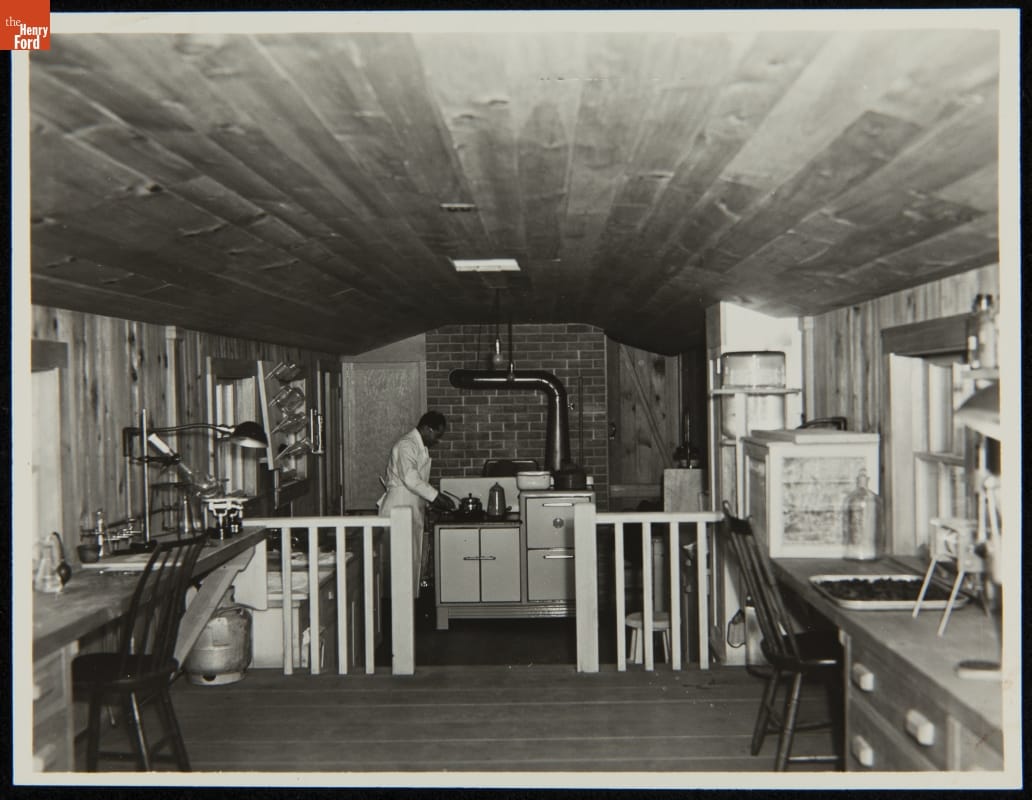 Food testing occurred in this lab. The results appeared in the booklet “Recipes for Soybean Foods.” It described the work of the laboratory, summarized the benefits of soy-based foods, and consolidated recipes proven in this laboratory. 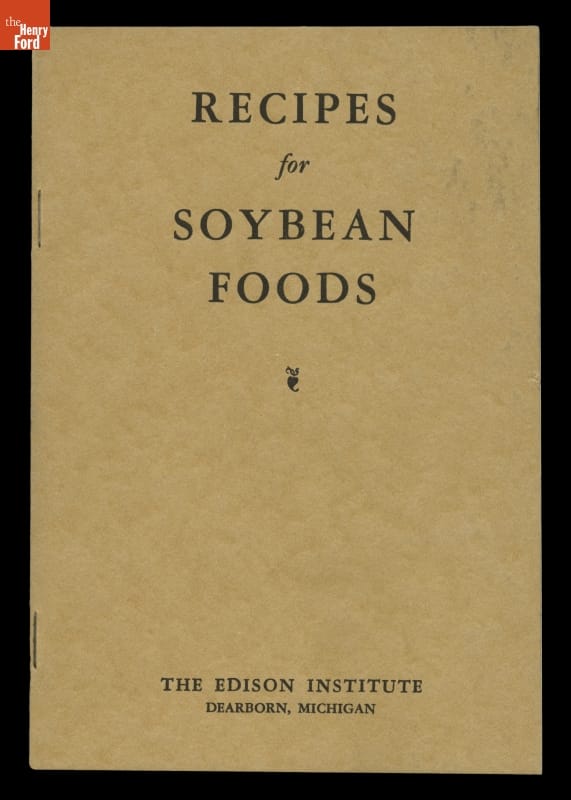 Cooks had to be aware that preparing soybeans required some extra effort. For example, “the soy bean generally requires a longer time for cooking than does the common bean…. With a pressure cooker, the beans can be cooked in 20 minutes at 20 pounds pressure” (page 2). Paul Foster used a pressure cooker to prepare soybeans in the kitchen workspace. 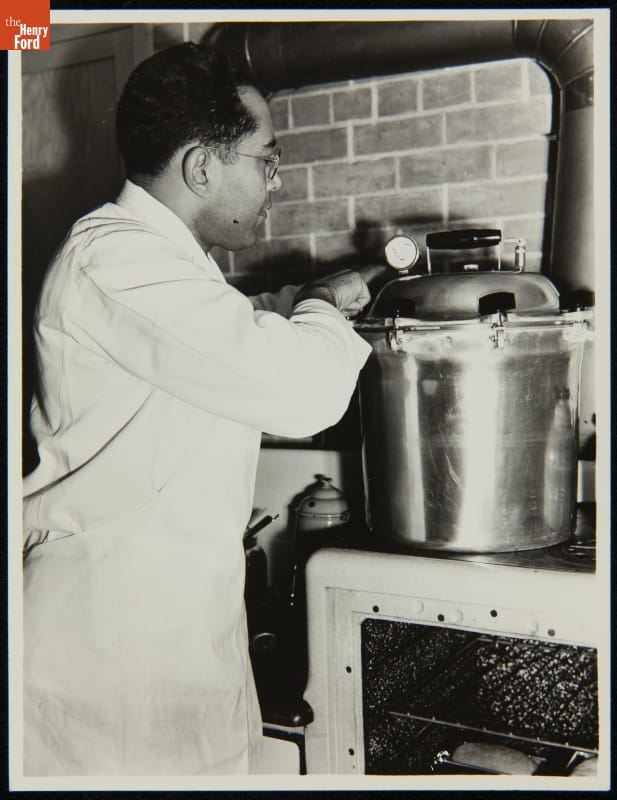 Lab technician (likely Paul Foster) with a pressure cooker in the Soybean Laboratory in Greenfield Village, circa 1935. / THF236489

Soybeans had a higher protein content than navy beans or lima beans, according to “Recipes for Soybean Foods.” Thus, cooks substituted soybeans to facilitate healthy eating. 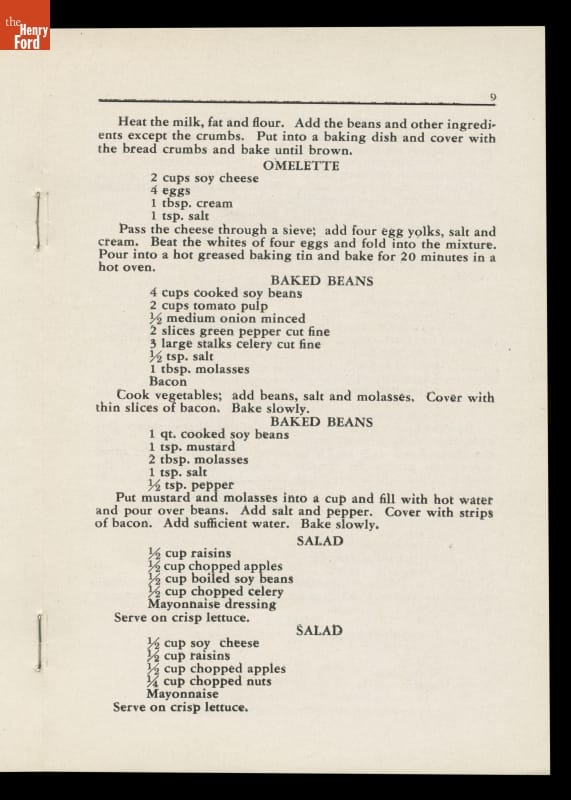 Soy flour also offered a higher-protein alternative to wheat flour, and a flour more supportive of diabetic diets and other diets for those intolerant to certain foods. Furthermore, soy flour properties helped bread remain fresher for longer. As “Recipes for Soybean Foods” explains, breads that incorporated 5% soy flour and 95% wheat flour produced a loaf of bread that kept longer than bread made without soy flour. Combining flours at a ratio of 20% soy and 80% wheat resulted in a bread loaf with 40% more protein than wheat flour alone (page 2). Such persuasive arguments converted some to soy.

The photographic print below shows Paul Foster preparing dough for soybean bread in the kitchen workspace. 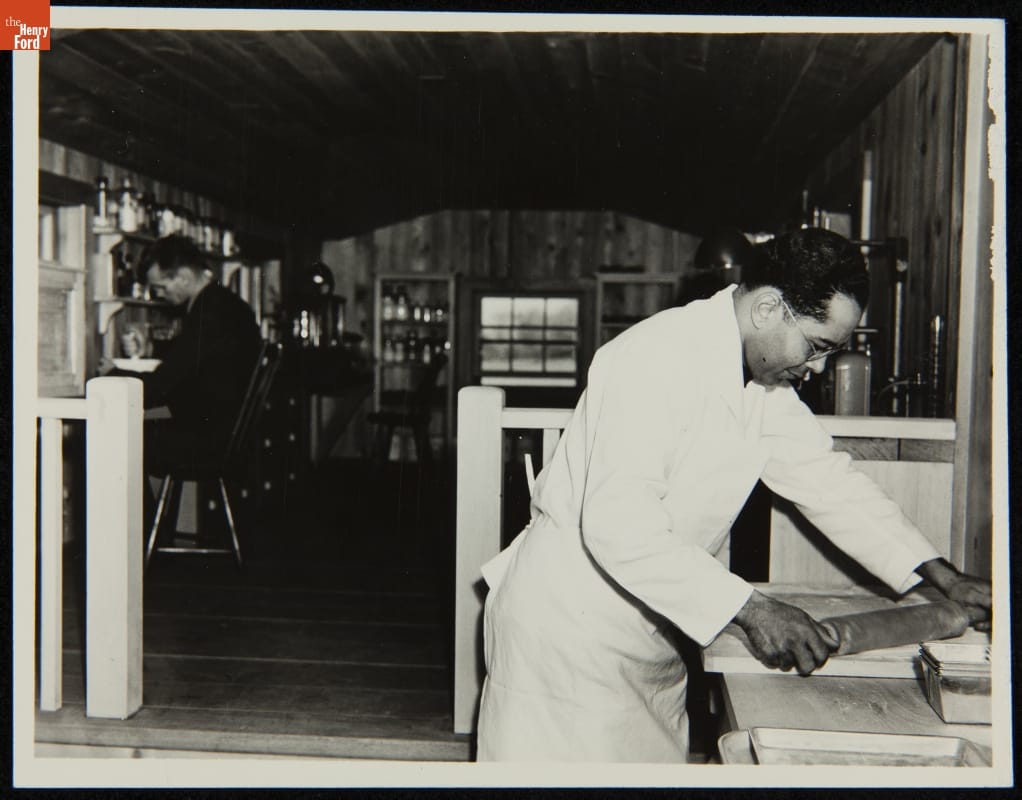 After baking, storing the bread in a wire-enclosed wood-frame container was the next step in the longer process of documenting drying rates for different types of bread loaves. 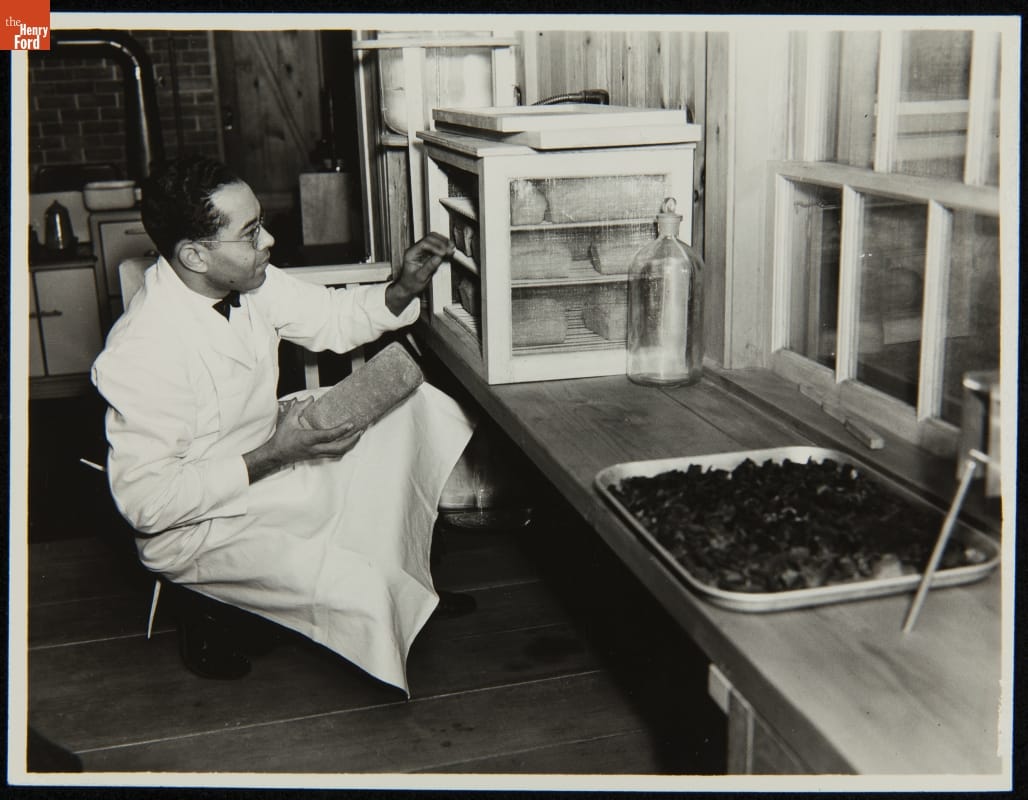 Storing bread in the Soybean Laboratory in Greenfield Village, Dearborn, Michigan, circa 1935. / THF236483

A closer look at Foster and his bread loaves, in the photo at the very top of this post, shows him in the process of loading the loaves into the food safe (a term used for similar wire-sided storage cabinets). The experiments in the test kitchen continued with rotation of loaves and measuring rates of dryness.

Interested in trying the recipe for the soybean bread baked in the laboratory in Greenfield Village? Check out page 4 of Recipes for Soybean Foods, or explore these and other recipes in the Ford Motor Company bulletin, published around 1939 (and two pages longer). Be mindful of inconsistencies. In both, on page 2, the directions indicate that the pressure cooker should be set at 20 pounds pressure, but page 16 in the earlier booklet, and page 18 in the 1939 version, states that soybeans should be cooked for 20 minutes at 25 pounds. 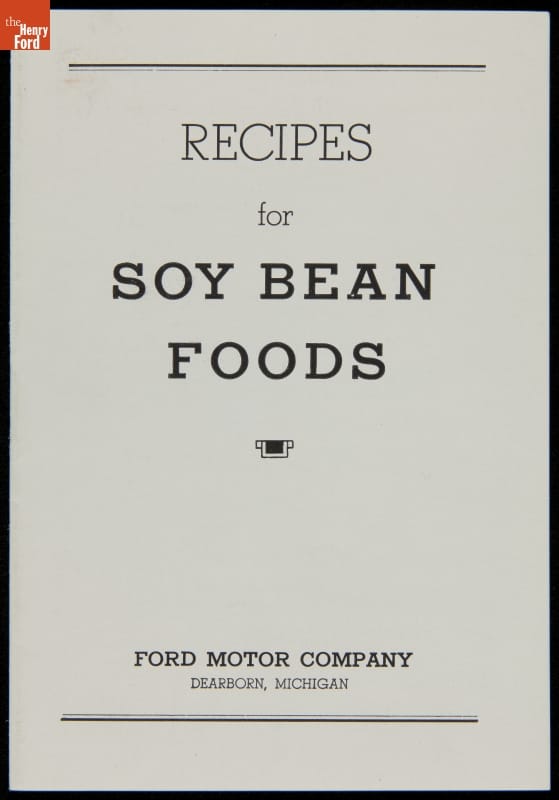 Foster remained visible in Soybean Laboratory research through the visit of George Washington Carver in July 1942. During this visit, Henry Ford dedicated a nutrition laboratory on Michigan Avenue, adjacent to Greenfield Village, named for Carver. It included an experimental kitchen described as “the dominion of Mr. Paul Foster” (Herald, August 14, 1942, page 12). 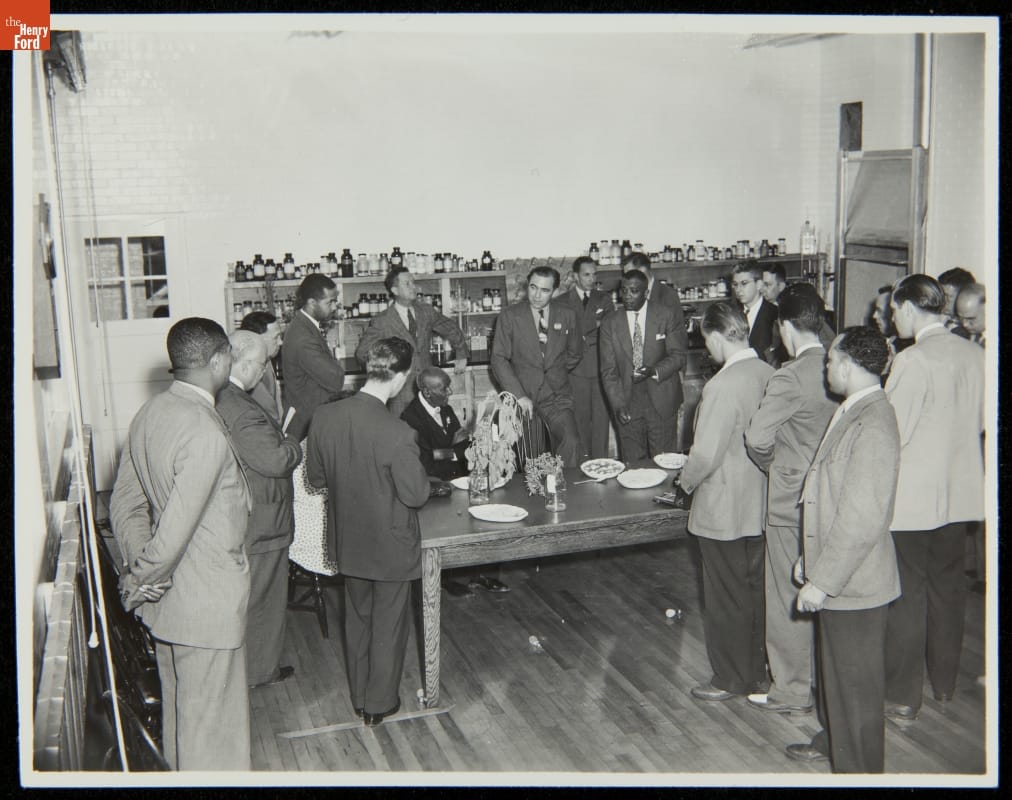 George Washington Carver (seated) at the dedication of Carver Nutrition Laboratory, Dearborn, Michigan, July 21, 1942. Paul Foster is standing in the foreground to the right. / THF214097

Foster apparently had full authority over the kitchen in the Carver Nutrition Laboratory: “Here this master of the culinary art will hold forth, concocting delicious morsels” (Herald, page 12). Carver credited Foster with the “weed sandwiches” sampled during the Nutrition Lab dedication (Herald, page 14). Carver appreciated such ingenuity, given his recent bulletin Nature’s Garden for Victory and Peace (March 1942). Foster’s sandwich spread of “nature’s vegetables” consisted of ground dandelion, purslane, curly dock, plantain, chickweed, lamb’s quarters, bergamot, oxalis, and radish seed pods with salt, lemon juice, and mayonnaise added. Served on soybean bread, such a mixture could have a wonderful flavor and “contain the equivalent in vitamins and minerals to the average person’s monthly diet of vegetables.” So explained Edison Institute student Robert Cavanaugh, who reported on “The Development of a New Laboratory” (Herald, page 12). A photograph of Foster, preparing vegetable sandwiches, illustrated the story.

Documenting Paul Foster’s role in research in either laboratory after 1942 remains a work in progress. Consider this a first installment as we continue to learn more about the scientists who worked at the Soybean Laboratory in Greenfield Village, and at the nearby Carver Nutrition Laboratory on Michigan Avenue.


Debra A. Reid is Curator of Agriculture and the Environment at The Henry Ford. She thanks Saige Jedele and Sophia Kloc for feedback that improved this blog.