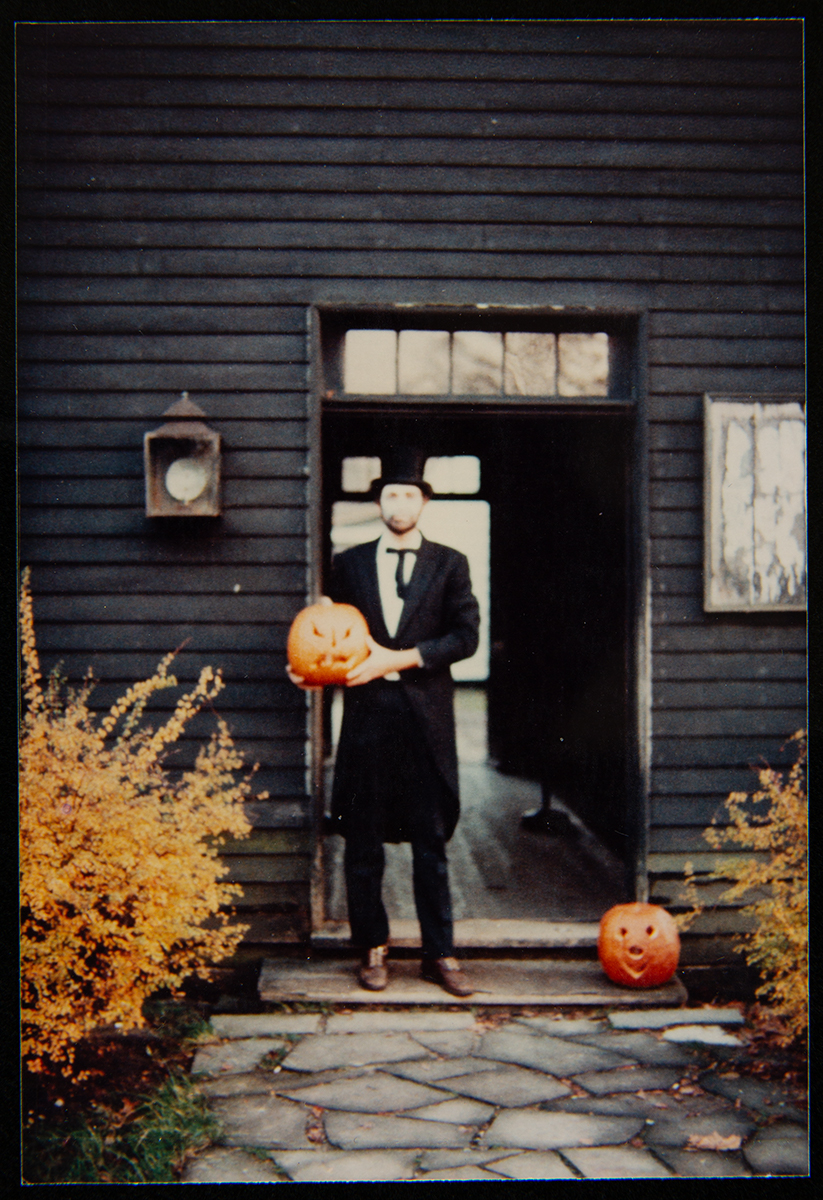 Curt Braden, as the “ghost” of Abraham Lincoln, posing with the carved jack-o’-lanterns at the doorway of the Logan County Courthouse that marked treat stops. (Photo courtesy Susan McCabe)

The 40th anniversary of “Hallowe’en in Greenfield Village” seems like a perfect opportunity to reflect upon the first Halloween program in Greenfield Village. I was there with my husband, Curt, in the Logan County Courthouse. With his face covered in white theatrical makeup, he played the “ghost” of Abraham Lincoln for the evening, while I played his wife, Mary Todd. Other “ghosts” were stationed at various other Village buildings, awaiting the young trick-or-treaters who would show up at their doorstep. We all wondered whether it would work, this crazy idea of using the Village as the canvas for a historically-themed Halloween program.

As kids filed through the Courthouse that night, my “ghostly” husband handed them each a Lincoln Head penny while he told them, “Here’s a token in remembrance of me.” Some kids gawked at him. Others smiled and circled back again for another penny. Still others scowled and said, “Only a penny?” I honestly remember almost nothing from that night. It was all a blur except for a few snapshots I have, proving we were there.

Now, 40 years later, I feel compelled to find out exactly what transpired that night. So, I asked Brian Wilson, our Senior Manager of the Archives and Library, to see if he could dig out the original program description of it (which he did). I also got in touch with a few old friends who had helped plan it and participate in it. What I found was that, while our memories are sketchy and sometimes inconsistent, we all felt that night that we were on a mission, a mission to provide guests with a combination of fun and learning using the rich historical stories that pervade Greenfield Village. The magical quality of being in the Village at night (decades before there were streetlamps) didn’t hurt either. 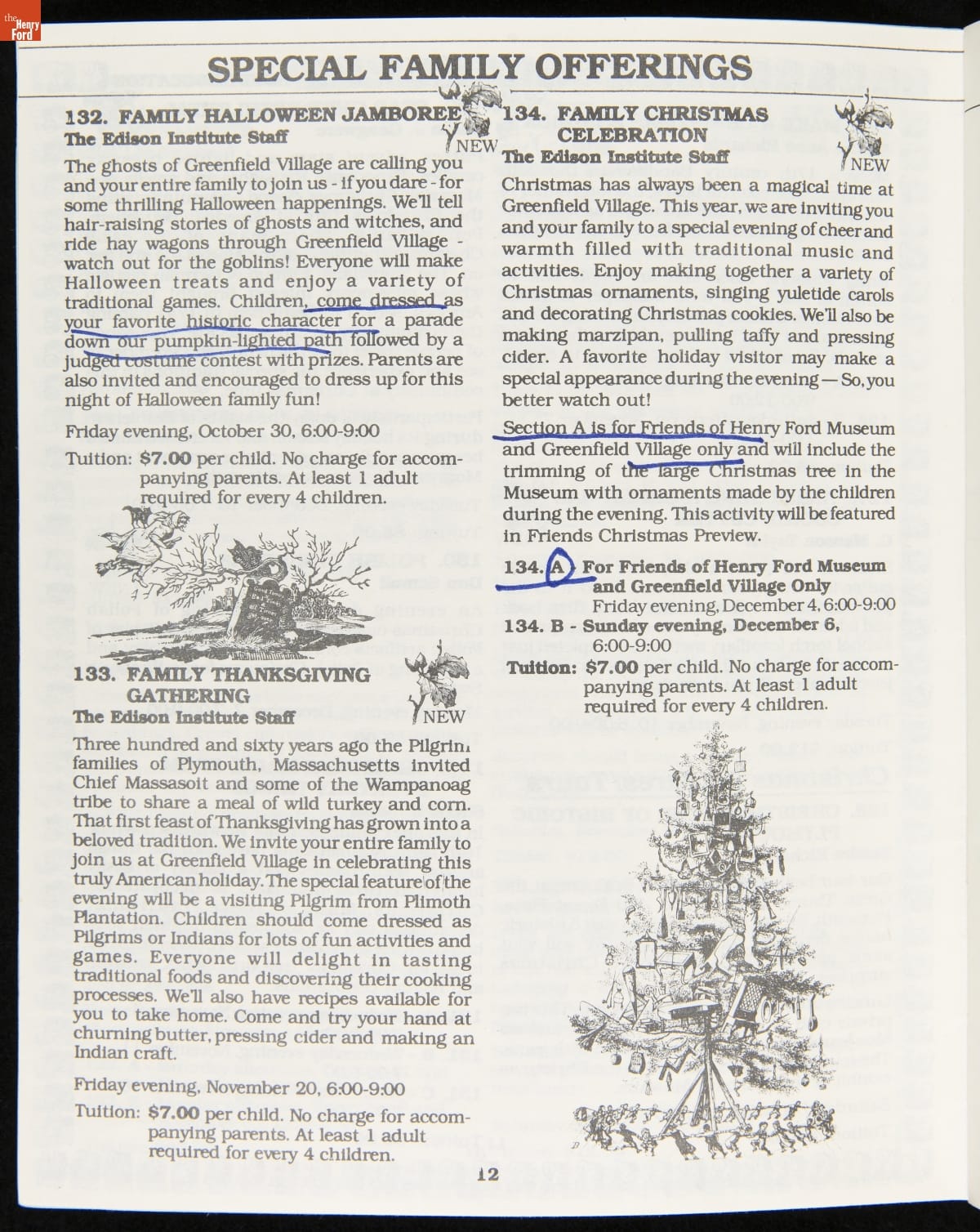 In 1981, the program was called the Family Halloween Jamboree and it was one of the many listings in the catalog of Adult Education, Teen, and Children’s Classes organized by the Education Department at the time. After the Greenfield Village schools had closed in 1969, the museum had become a strong advocate of offering educational classes for the general public. By the early 1980s, the class catalog was extensive, including page after page of lectures, tours, and an incredible array of craft classes, like glassblowing, blacksmithing, and tinsmithing. Children’s classes also involved a wide array of different take-home crafts and hands-on opportunities. 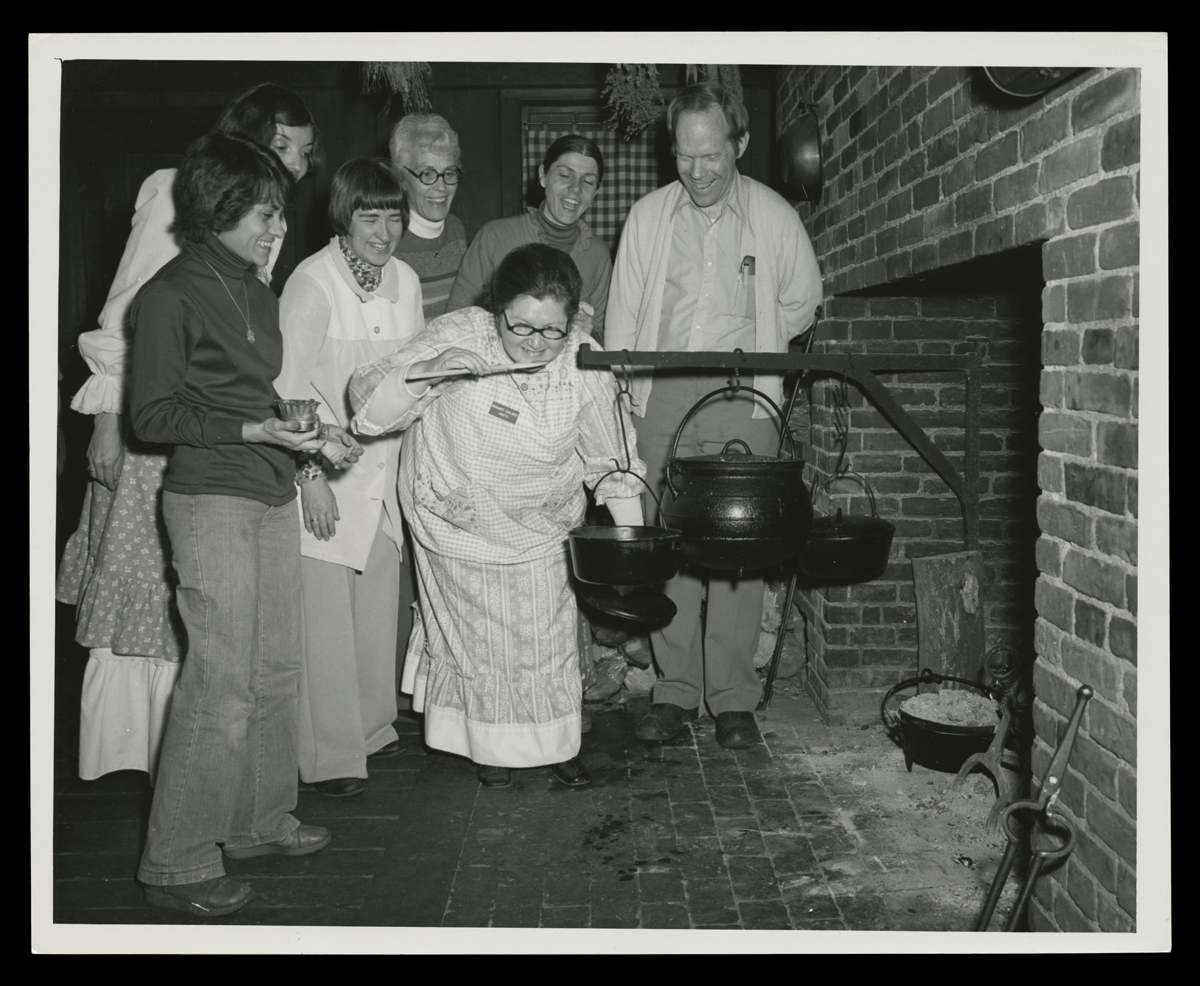 Harold Skramstad’s arrival as President in 1981 provided the catalyst to reimagine a wide variety of new educational programs. Summer Discovery Camps began that year, along with new Member programs. All of these new programs were characterized by a close alignment with our historical figures and stories. The Family Halloween Jamboree was no exception. Jim VanBochove, a graduate student intern that previous summer and a participant in the first Halloween program (and now Director of Organizational Culture at The Henry Ford) explained that, “That was one of the great things in those days—that you could really try some new things. There was support, even if it didn’t turn out.”

This program was the brainchild of museum professional Candace Matelic, hired earlier that year as Manager of Adult Education and Children’s Programs. She was helped by her able assistant, Susan Gangwere (now Susan McCabe), a graduate student summer intern like VanBochove who had just recently joined the Education staff. Inspired by Skramstad’s encouragement to be creative, break down old barriers, and try new things, Matelic and Gangwere put their heads together to create each of the elements for this, one of three holiday-related family programs that year. 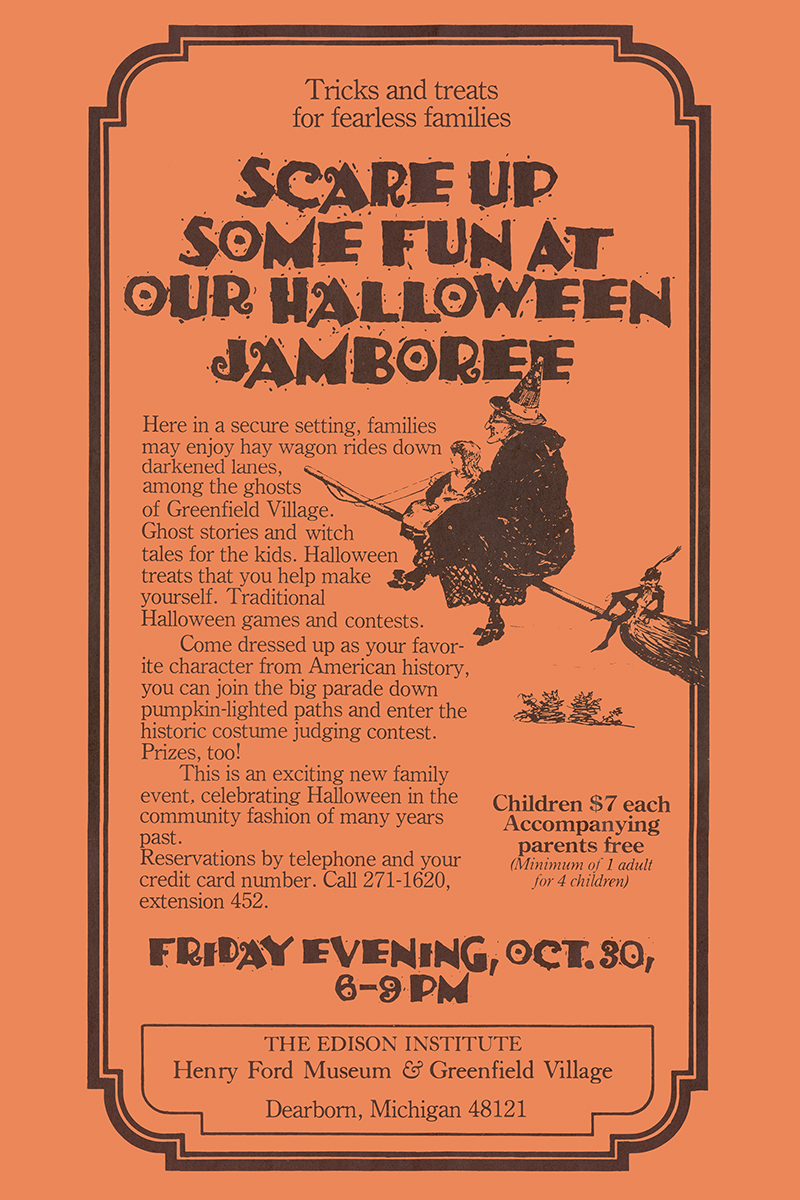 From the beginning, the 1981 Family Halloween Jamboree was planned with children in mind—including “hair-raising stories of ghosts and witches,” making Halloween treats, and enjoying a variety of traditional games. In keeping with the focus on the historic nature of Greenfield Village, children were encouraged to come dressed as their favorite historic character, which they would show off in a “parade down a pumpkin-lighted path,” followed by a judged costume contest with prizes. Parents were encouraged to dress up for the night as well. The evening cost $7.00 per child, while accompanying adults were free. 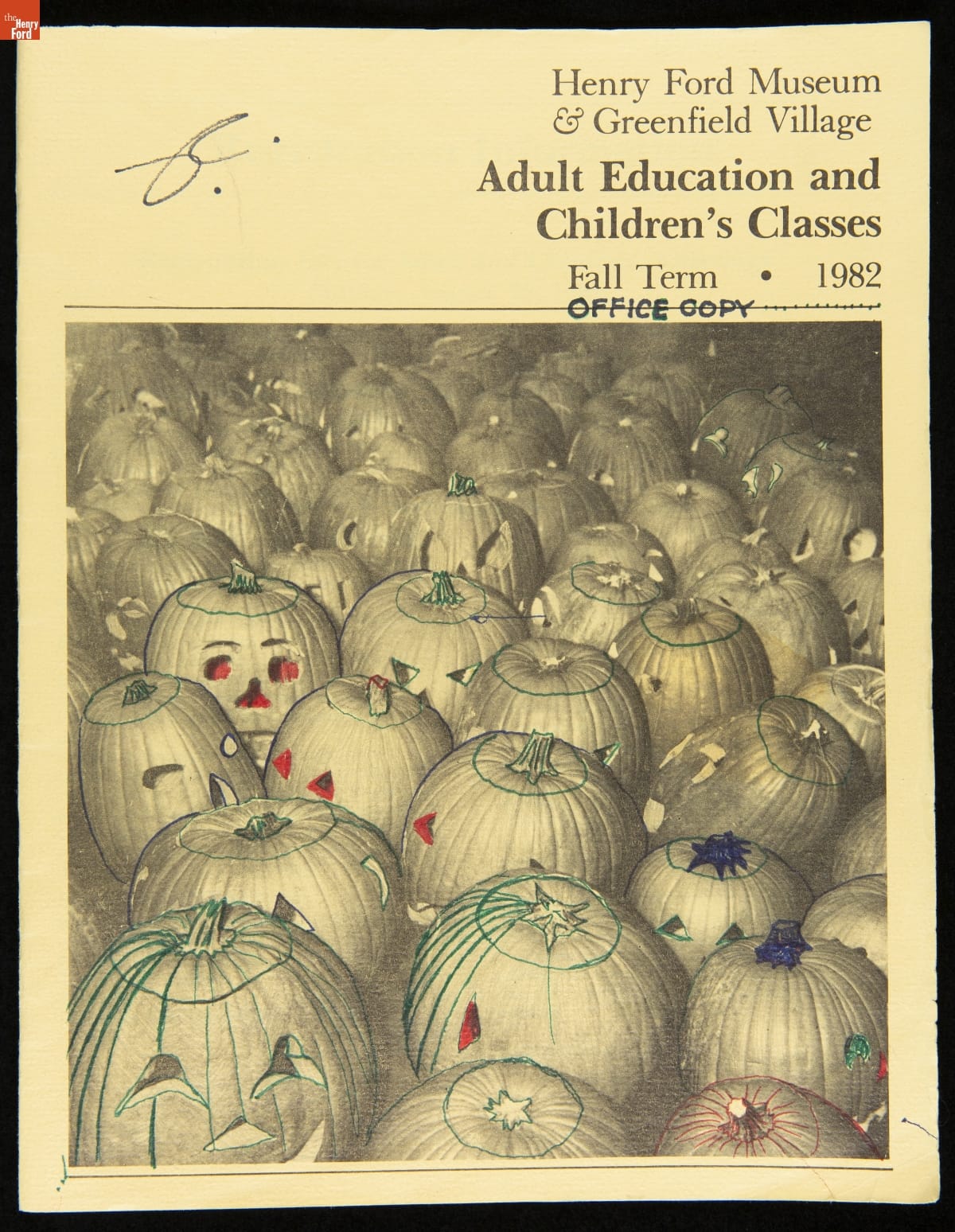 This cover of the 1982 class catalog shows a portion of the 150 jack-o’-lanterns that volunteers had carved for the 1981 Family Halloween Jamboree. / THF610728

Hay wagons took guests on rides from Town Hall through the Covered Bridge, around the loop and back to the Village Green. On the way, they encountered spooky characters, like the Grim Reaper and the Headless Horseman. Back at Town Hall, they could partake of cider and donuts, and bob for apples. A highlight of the evening was that guests could walk to several trick-or-treat stops in and around the Green. White-faced “ghosts” of historical figures connected with Greenfield Village buildings passed out treats that were specifically themed to each building or character. At the Courthouse, it was Lincoln Head pennies; at Stephen Foster Memorial (now the Sounds of America Gallery), VanBochove, as the “ghost” of Stephen Foster, handed out kazoos while singing excerpts of more “ethereal” Stephen Foster songs like “Beautiful Dreamer” and “I Dream of Jeanie with the Light Brown Hair.” Carved jack-o-lanterns, placed at the doorways, marked each treat stop. 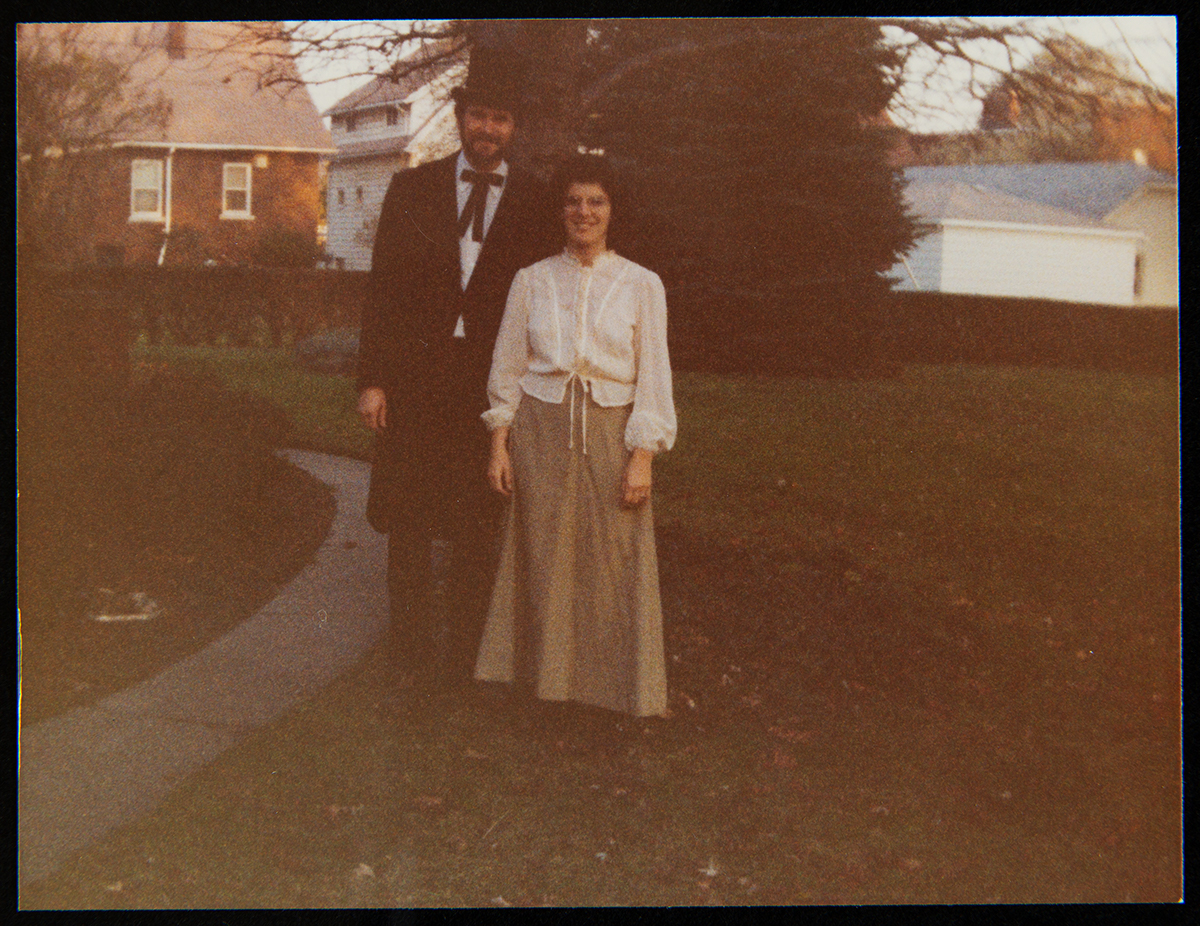 Curt and I pause for a snapshot before heading to the Village for the big evening, 1981. Before the days of a department that researched and created historical clothing for Greenfield Village staff, I did my best to dig out some (rather historically inaccurate) vintage clothing from my own closet to wear for the evening. (Photo courtesy Donna Braden)

This one-night Jamboree attracted some 300 people. As VanBochove recalled, “We all thought that was HUGE. And there were many moving parts so lots of learnings.” Susan McCabe concurred that it was a great way to learn about the logistics of Village experiences, like how to move people through, how many supplies to have on hand, and how to get all those pumpkins carved! 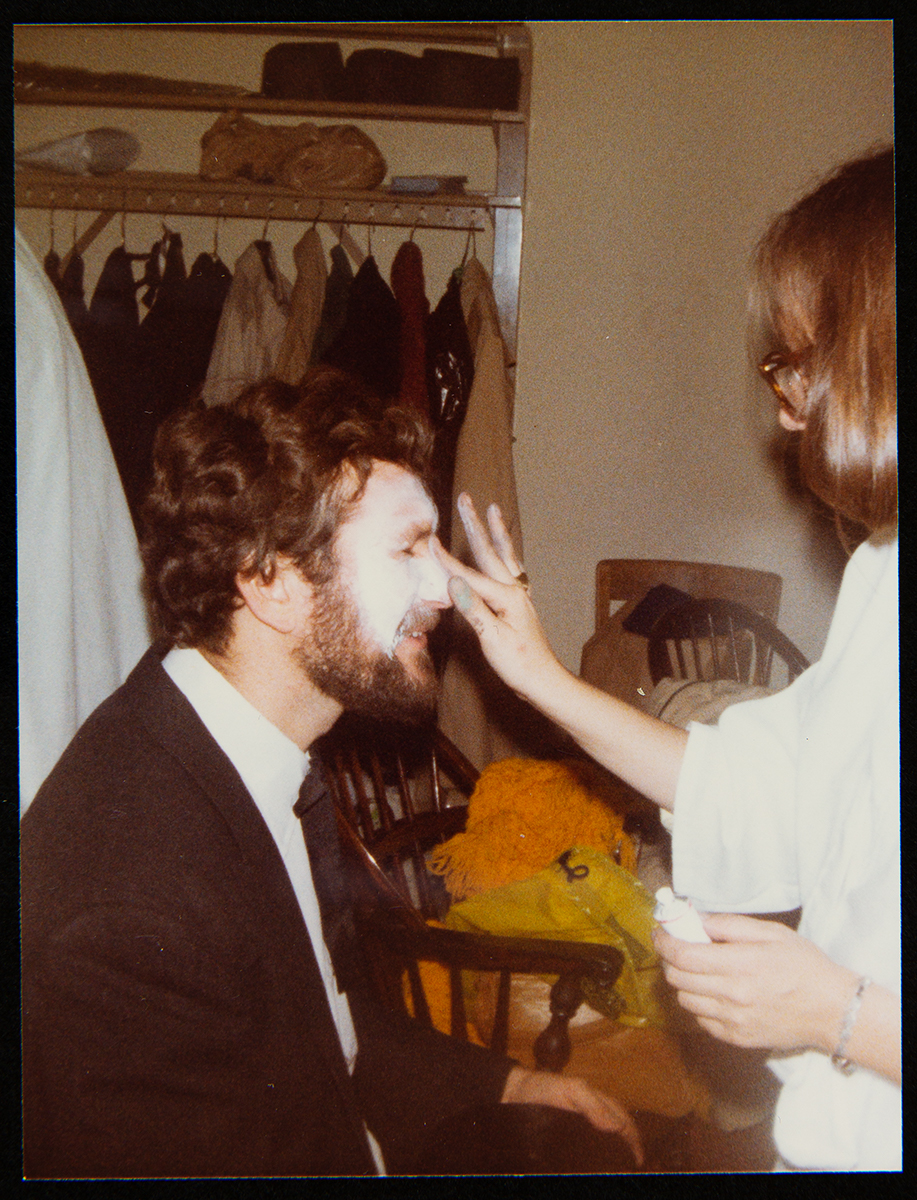 Building upon the success of this first program, the next year’s program was expanded. Now costing $5.00 per person, it was held on two successive nights. The modest pumpkin-lit path for the children’s costume-judging parade now extended through many of the streets of the Village, with an accompanying map “to tell you the whereabouts of the ghost and spirits we expect to join us.” Candace Matelic remembers that two educational assistants “did nothing all night but keep the pumpkins lit, and there were hundreds of them.” 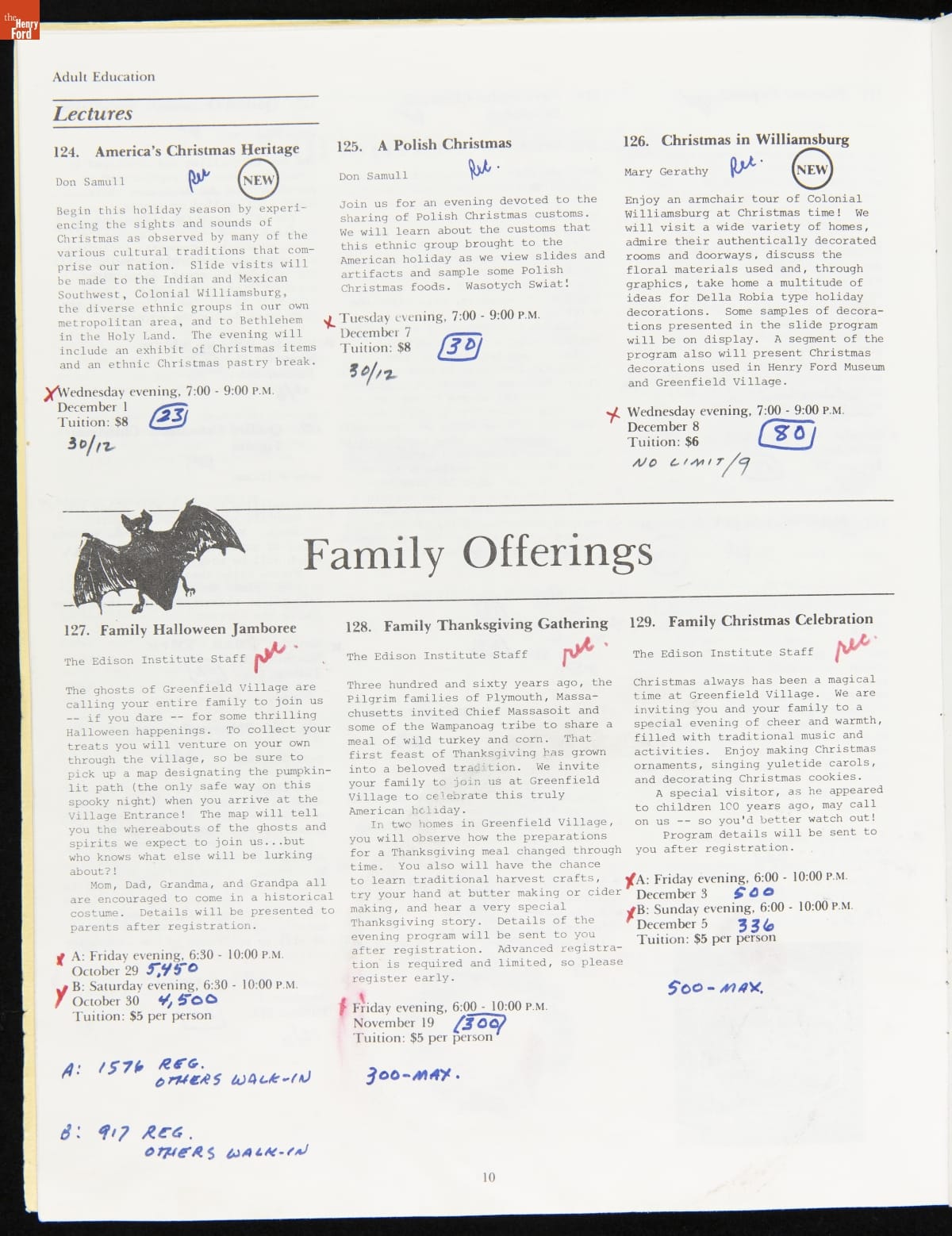 Description of the 1982 Family Halloween Jamboree, explaining the new navigation through the Village by pumpkin-lit paths and a map / THF610735

The popularity of the 1982 Family Halloween Jamboree was greatly aided by the Tylenol scare of that year, in which cyanide-laced acetaminophen was found placed on drugstore shelves and sold. This high-profile crime eventually led to the introduction of child-proof containers and tough Federal laws aimed at punishing those who tampered with drugs. No evidence of contaminated Halloween candy was ever found that year and, since that time, stories like these have become the stuff of urban legend. But, in 1982, the scare was real, parents were worried about letting their kids go trick-or-treating through neighborhoods, and that year’s Family Halloween Jamboree in Greenfield Village received a big boost in attendance.

Beyond this, Matelic thinks that these early programs were exceptionally unique because, “We clearly touched a chord in providing a safe and memorable family experience in those early years, in response to a community need. I like to think of it as a gift to the community. It was fun, interactive, and welcoming. We had fun and that let visitors have fun. We made a connection to a beloved American tradition and started a new relationship to the community.” 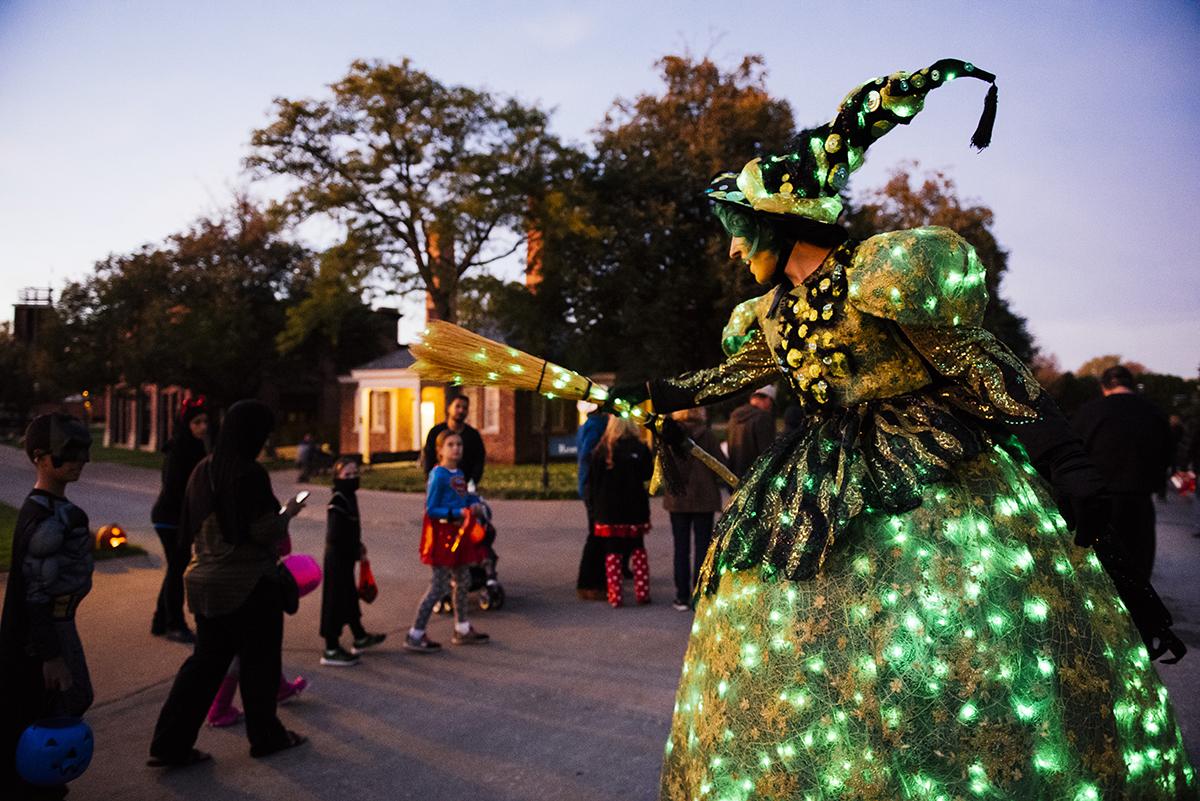 By 2018, the year of this photograph, “Hallowe’en in Greenfield Village” had become a mega-event that lasted 11 nights and attracted 70,000 guests.

These two early programs laid the groundwork for today’s extravaganza that thousands anticipate every year. Why does it remain as popular as ever? Having spent time at many treat stations over the years, VanBochove remarks that, “it has always amazed me that even with the thousands of guests who come on any evening, almost everyone has a sense that the program is just for them, that they are there with family, and that this is a special memory that only we can help create.” Matelic, who has worked at several museums since those early days and mentored hundreds of students pursuing museum careers, reflects that, “While the focus and contents (and size and length) have broadened over the years, the program is still touching hearts and minds, offering an opportunity for generations to continue making cherished family memories.”

Do you have a cherished memory of the 1981 Family Halloween Jamboree in Greenfield Village?

Donna R. Braden, Senior Curator and Curator of Public Life at The Henry Ford, would like to thank Candace Tangorra Matelic, Ph.D., Susan Gangwere McCabe, Jim VanBochove, and Curt Braden for their willingness to share their memories of this groundbreaking program.