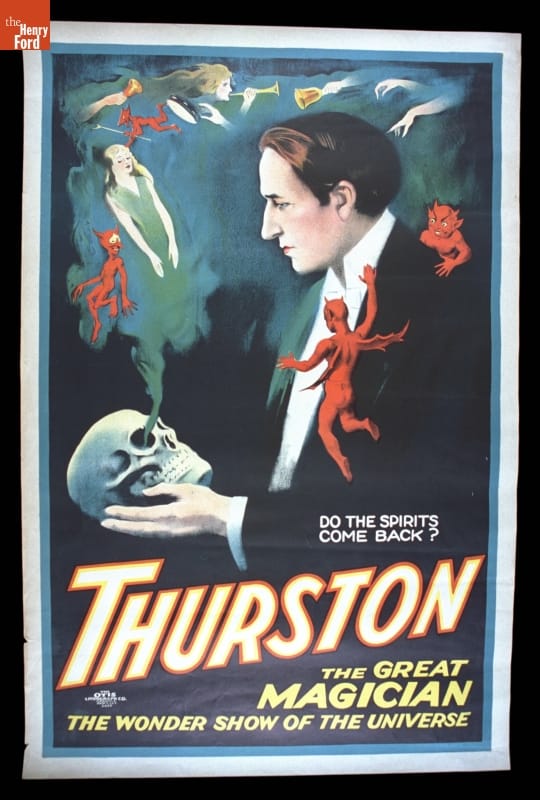 The Henry Ford’s digitization and digital content teams get together for a 10-minute stand-up meeting every morning, and those meetings consistently spawn intriguing conversations about the amazing, rare, awesome, and significant items in our collections. Sometimes our discussions turn to objects that make sense within the context of their time and place, but which might seem strange or unsettling today.

In honor of the Halloween season, we’ve put together an Expert Set of some of our favorite such artifacts, selected by our staff. For example, Curator of Communication & Information Technology Kristen Gallerneaux selected this poster, shown above, featuring magician Howard Thurston and a bevy of supernatural figures.

Visit the Expert Set in our Digital Collections to see more—if you dare...

This selection of postcards represents a uniquely American blend of Hallowe'en traditions that by the early 1900s included the popular activity of sending and collecting these holiday-themed greeting cards.

The colonial American traditions of Hallowe'en centered on celebrations of the harvest, fortune-telling, and even matchmaking. Later immigrants brought new layers of customs and practices, including the jack-o-lantern that is perhaps today's best-known symbol of the American holiday. By the 1890s the growing print media publicized Hallowe'en from its pockets of regional variation across the country, making it a truly national affair. Over time, the holiday became a community observance of eerie fun for all ages.

Based on early 20th-century Hallowe'en celebrations, our annual Greenfield Village Hallowe'en is one of our most attended public events. Since 1981, we have often given guests attending this evening program a reproduction postcard as one of the treats. (This year's Hallowe'en postcard, pictured above, was designed by Ellen Clapsaddle in 1917.) As an amusing addition since 2010, we have created a photo opportunity vignette using an enlarged version of the postcard giveaway. Our Phoenixville Post Office also offers for sale and mailing a selection of Hallowe'en postcard repros from past years, starting in the autumn.

Halloween Postcard Showing Young People on a Hayride, circa 1912

Cynthia Read Miller is Curator of Photographs and Prints at The Henry Ford.

Hallowe’en is one of our favorite times of the year here at The Henry Ford and although we’re suckers for tradition, guests should expect some surprises on the horizon at this year’s spooky celebration.

You see, for us, it’s not about the scream-inducing theatrics, but the history and background of Hallowe’en. That’s why the aesthetics we use to transform Greenfield Village are inspired by the 20th century to the early ‘60s.

Wondering how we know so much about what Hallowe’en was like more than 100 years ago? Well, let’s just say we know how to do our research; it’s not an easy or short process, though.

Our creative team works on Hallowe’en in Greenfield Village 365 days a year.

“We are constantly researching and looking into anything that triggers our thought process. Additionally, new technology that can we can incorporate is always emerging,” says Jim Johnson, our Senior Manager of Creative Programs.

Our most inspirational and useful sources of information regarding Hallowe’ens past come from party guides and pamphlets ranging from the early 20th century to the 1960s and Dennison’s Bogie Books.

Surprisingly, Hallowe’en was a much different holiday when it first began, as compared to the terror-ridden night of horror we are accustom to nowadays.

Hollows Eve actually started as a night of romance, even more so than Valentine’s Day. It was a night of finding your future companion by way of a fortune teller or completing a special list of activities at midnight so the face of your true love would be revealed.

In fact, the trick-or-treating tradition we all know and love did’nt come into play until the 1930s and was not prominently practiced until the ‘50s.

This year, we’ve decided to implement a masquerade theme, featuring a nod to some classic literature and Frankenstein circa 1820s, complete with new visual, lighting and sound effects, fresh characters and a twist on some of our program staples. (Sounds pretty cool to me.)

“Although we will have a few new elements,” Jim explains, “It’s not about what’s new, it’s about what’s ‘cool’. We’re more focused on ‘looking back’. This year’s program is very cool and definitely sparks the imagination of people of all ages.”

Well, there you have it. History buffs we may be, but we’re nothing if not cool. We believe it’s all about continuing to evolve and that is exactly what we intend to do through our Hallowe’en event and beyond.

Brianna Garza is a media relations intern at The Henry Ford.

Little-known Hallowe'en history (and why is it spelled that way?)

When it comes to Halloween history, domestic life curator Jeanine Head Miller and creative programs senior manager Jim Johnson really know their stuff! Read on for lots of little-known facts about the origins of what has become one of America's most popular holidays.

Immigrants who came to America brought their folk traditions and religious beliefs with them to the New World. Folk superstitions of the British Isles, particularly the Celts, converged with observances of the Catholic Church and traditional American harvest celebrations into a "witches brew" of traditions that created the American holiday of Halloween.

By the 1890s, Halloween was increasingly celebrated in America, as articles in magazines and newspapers helped popularize and spread Halloween traditions to a national audience. While the origins of Halloween were rooted in superstition and fortune telling, the holiday had become a night of mystery and innocent fun.

The first Halloween gatherings were designed as matchmaking parties for young people, with games to “predict” matrimonial futures and ample opportunity for innocent flirtation. By the 1910s, other adults and children had joined in the fun of Halloween parties and the practice of donning Halloween costumes gained popularity.

When postcards caught the public’s fancy during the early 1900s, people enjoyed sending colorful Halloween greetings to their family and friends. As the 20th century progressed, civic organizations increasingly promoted Halloween as an event for all. Many communities began to host public celebrations that included festivals, parties and costumed parades.

The Henry Ford is home to quite a collection of Halloween items, including several Dennison's Bogie Books, on which we have based our Hallowe'en in Greenfield Village artwork over the past several years; these were essentially advertising catalogs for the Denison Paper Company, which exists now as Avery Dennison (the label and office products company).

The Denison Paper Company specialized in paper party goods, particularly crêpe paper, and their Bogie Books were developed as a vehicle to sell everything from Halloween costumes to decor.

The books were published from 1912-1926, except for 1918, when Halloween was essentially cancelled that year due to the severe and quite deadly flu pandemic - no one held parties or went trick-or-treating to avoid further spreading flu germs. Dennison's Bogie Books began at a cost of five cents in 1912 and were priced at ten cents by 1926; the next year, they changed formats and eventually stopped selling Halloween-only guides by the 1930s.

We also recently added a set of 1920s-era Halloween decorations to our collections, which were made by the Beistle Company in Pennsylvania and include invitations, lampshades, placecards, candle holders, party picks, nut cups and fortunes that were given to partygoers.

Finally, you may have wondered: Why exactly do we spell Hallowe'en that way?

When the Christian church began to expand its influences, the focus of these old pagan rituals was re-associated with All Saints' or Hallows' Day. The night before this feast became known as All Hallows' Even, which was eventually abbreviated to Hallowe'en - and this spelling was common well into the 1930s.