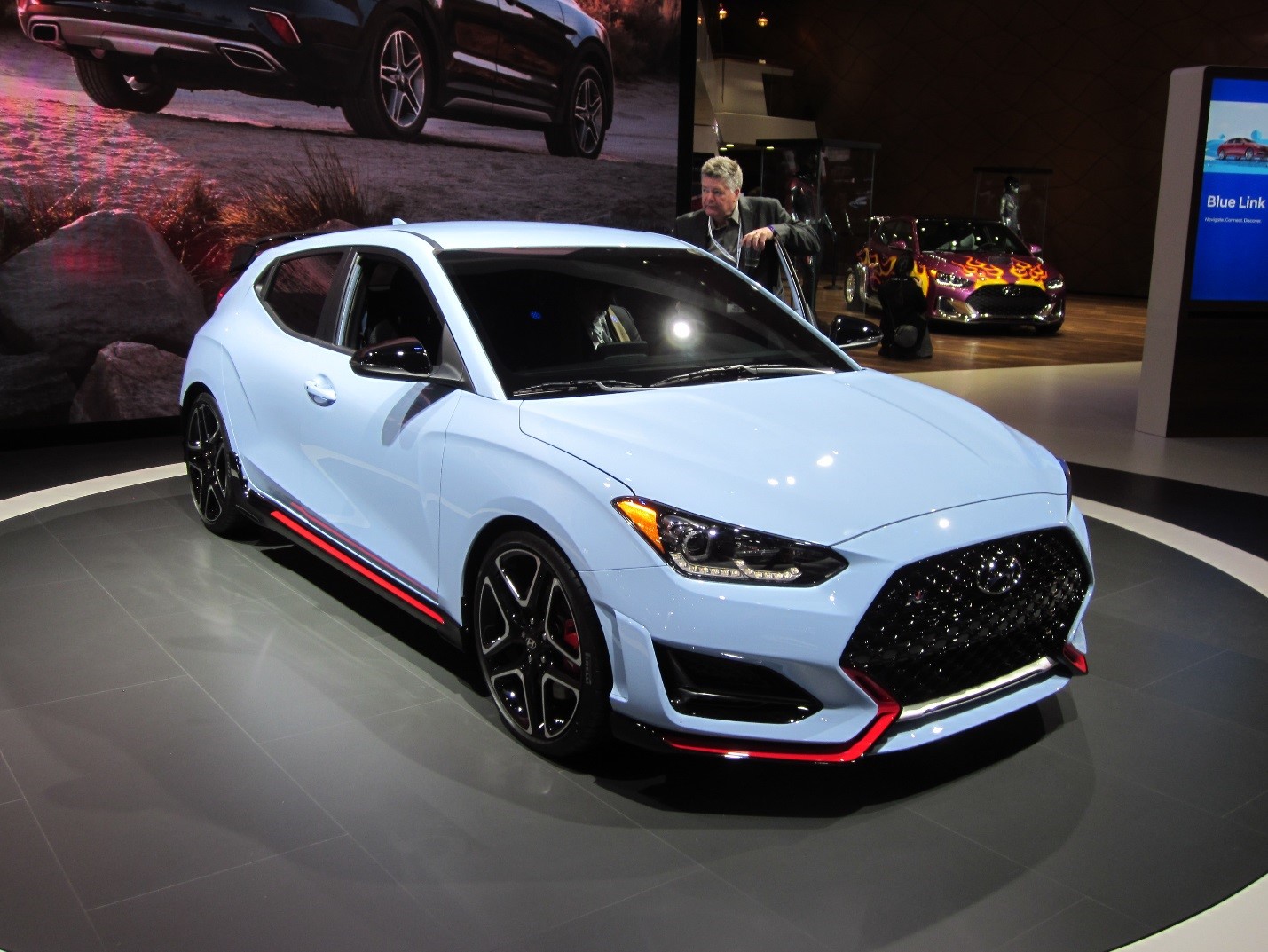 Detroit is the capital of the global automotive industry once more as the 2018 North American International Auto Show arrives at Cobo Center. Carmakers from around the world have come to share peeks at their 2019 model lines, and hint at new technologies that may be coming in the years ahead. As usual, the exhibits range from exciting, to informative to downright unreal. 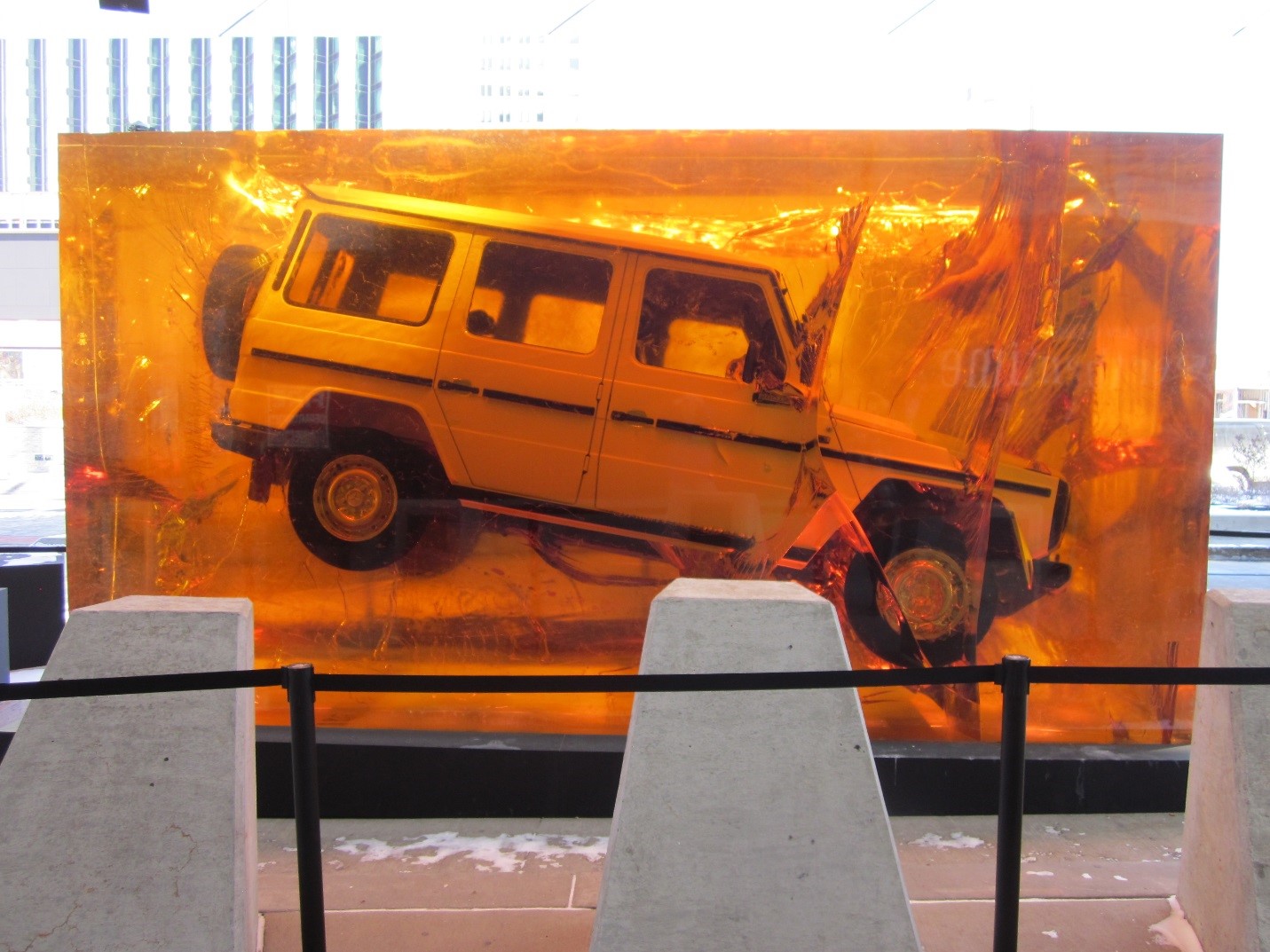 This is exactly what it looks like: a 1979 Mercedes-Benz G-Class frozen in amber.

Mercedes-Benz takes the cake for most unusual display. The German automaker unveiled a new version of its venerable G-Class SUV, in continuous production since 1979. To emphasize its endurance, Mercedes encased a vintage G-Class in a giant block of amber. (Think dino-DNA mosquitoes in Jurassic Park.) The block is located outside, along Washington Boulevard, rather than in the Mercedes-Benz booth. But don’t miss that either – you can see a 2019 G-Class splattered with faux mud, and the G-Class driven to victory by Jacky Ickx and Claude Brasseur in the 1983 Paris-Dakar Rally. 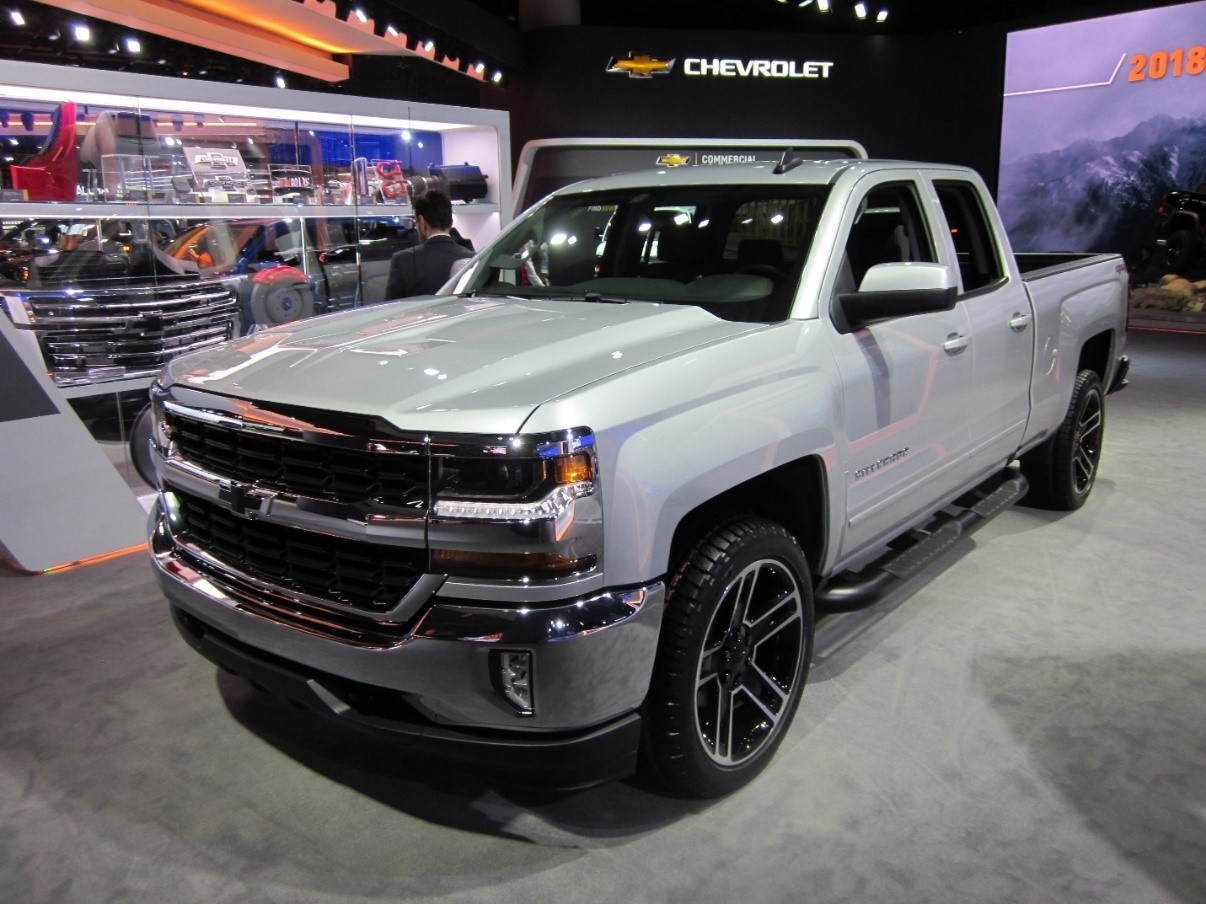 The Chevrolet Silverado – now lighter thanks to a blend of steel and aluminum body panels.

With gas prices down and the economy up, Americans have reignited their romance with pickup trucks. Chevrolet and Dodge both revealed new full-sized models, while Ford trumpeted the return of its mid-size Ranger. The 2019 Chevy Silverado rolled out under the headline “mixed materials.” In response to the Ford F-150’s aluminum bed (premiered at 2014’s NAIAS) and fuel efficiency targets, the bowtie brand is now building Silverado bodies with a mix of steel and aluminum components, shedding some 450 pounds from the truck’s overall weight. Chevy, celebrating a century in the truck business this year, is quick to point out that Silverado’s bed remains an all-steel affair. (Silverado TV commercials have been cutting on the F-150’s aluminum bed for some time now.)

China is a bigger factor in the American auto industry each year. Buick’s Envision crossover is already made in China, and Ford will shift production of its compact Focus there next year. It’s only a matter of time before a Chinese automaker starts marketing cars in the United States. GAC Motor hopes to be the first, announcing plans to sell vehicles stateside in 2019. (Yes, Chinese-owned Volvo is already selling cars here, but it first came to the U.S. in 1955 in its original Swedish guise.) It could be a tough sell – U.S. automakers and politicians aren’t too pleased with the steep tariffs imposed on American cars sent to China. In the meantime, GAC tempts NAIAS visitors with its Enverge concept SUV. The all-electric Enverge is said to have a range of 370 miles on a single charge – and can be recharged for a range of 240 miles in a mere 10 minutes. 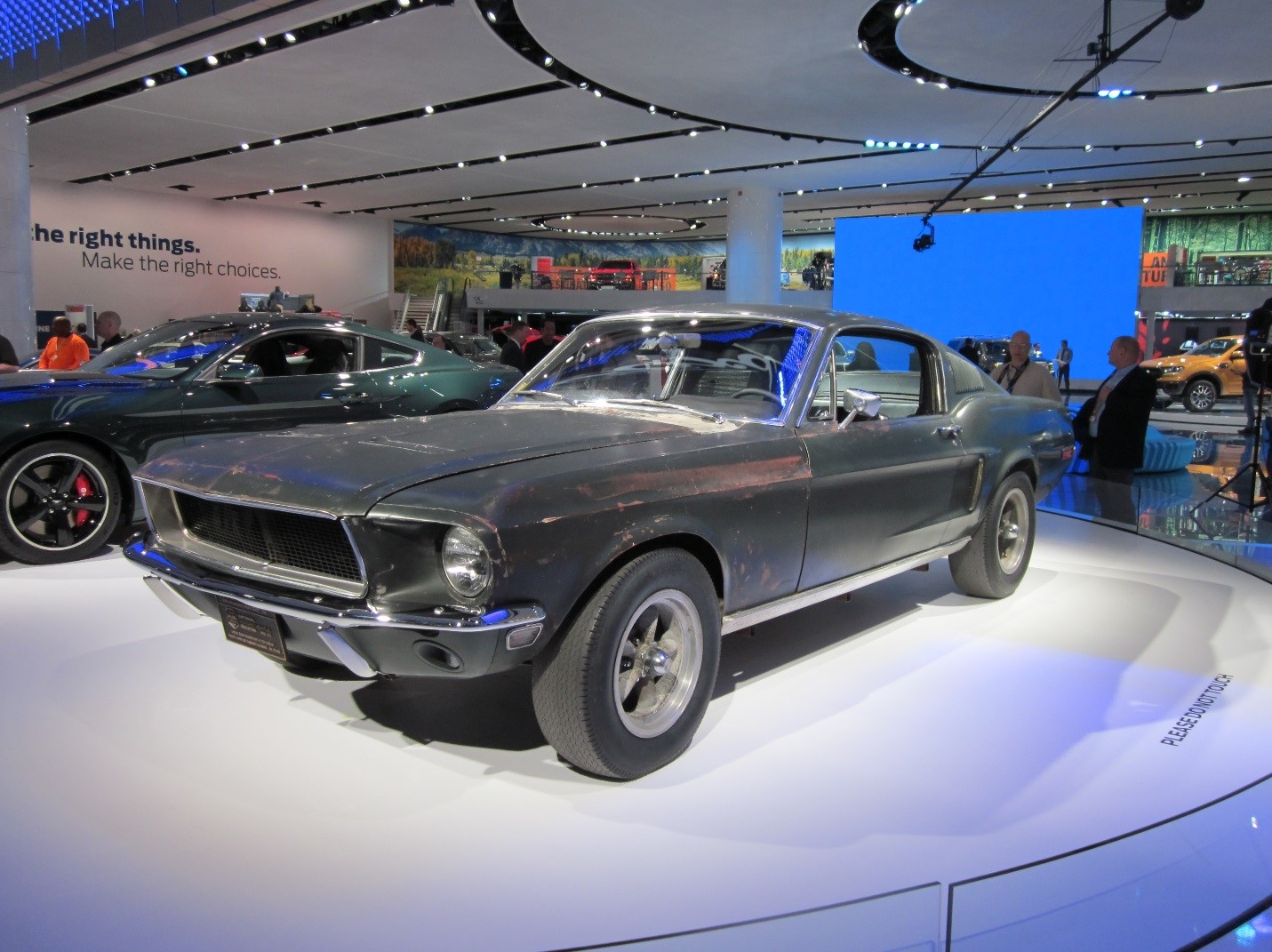 Ironically, one of the most talked-about cars at NAIAS is 50 years old. Ford Motor Company tracked down one of two Highland Green Mustangs driven by Steve McQueen in the 1968 thriller Bullitt. As any gearhead knows, the movie’s epic 11-minute chase scene, in which McQueen and his Mustang go toe-to-toe with a couple of baddies in a black 1968 Dodge Charger, is considered one of Hollywood’s all-time greatest car chases – even half a century later. Its lasting appeal is a credit to McQueen’s skill (both as an actor and a driver – he did some of the chase driving himself), the “you are there” feel of the in-car camerawork, and – obviously – the total absence of CGI. Those are real cars trading real paint.

The current owner’s parents bought the Mustang through a 1974 classified ad in Road & Track magazine. For years they used one of pop culture’s most important automobiles as their daily driver! With the movie’s 50th anniversary this year, the owner decided it was time to bring the car back into the spotlight. Ford agreed and, in addition to the movie car, its booth also features the limited edition 2019 Bullitt Mustang, a tribute car that hits dealer lots this summer. 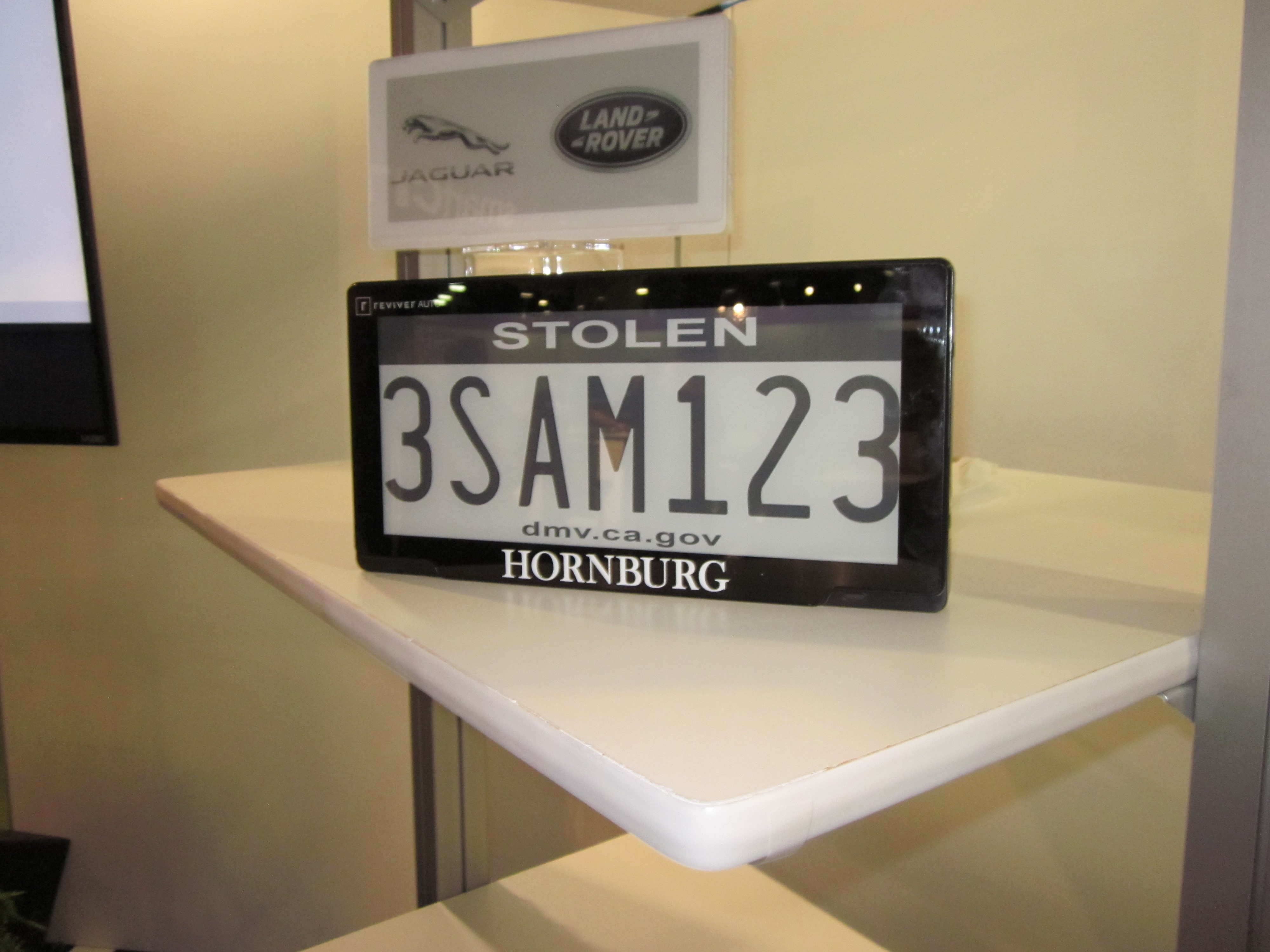 Digital license plates may one day eliminate sticker tabs – or be remotely updated to alert police of a stolen vehicle.

The youngest, hungriest companies at NAIAS are on Cobo Center’s lower level. More than 50 start-ups, along with colleges and government agencies, are in Detroit for the second annual AutoMobili-D, the showcase for fresh ideas and innovative technologies. Reviver Auto hopes to revolutionize an accessory that hasn’t changed in more than a century: the license plate. The California company proposes swapping the tried and true stamped metal plate for a digital screen. The new device is more visible in low light and poor weather, and resistant to the corrosion that plagues metal plates. In lieu of adhesive registration tabs, your digital plate could be renewed remotely each year by the DMV. Plates could also broadcast Amber Alerts to other drivers, or be updated by authorities if you report your car as stolen. Some will argue that current license plates are fine – as functional and intuitive as need be. But based on the number of randomly-placed renewal tabs I see out there, I’m not so sure there isn’t room for improvement.