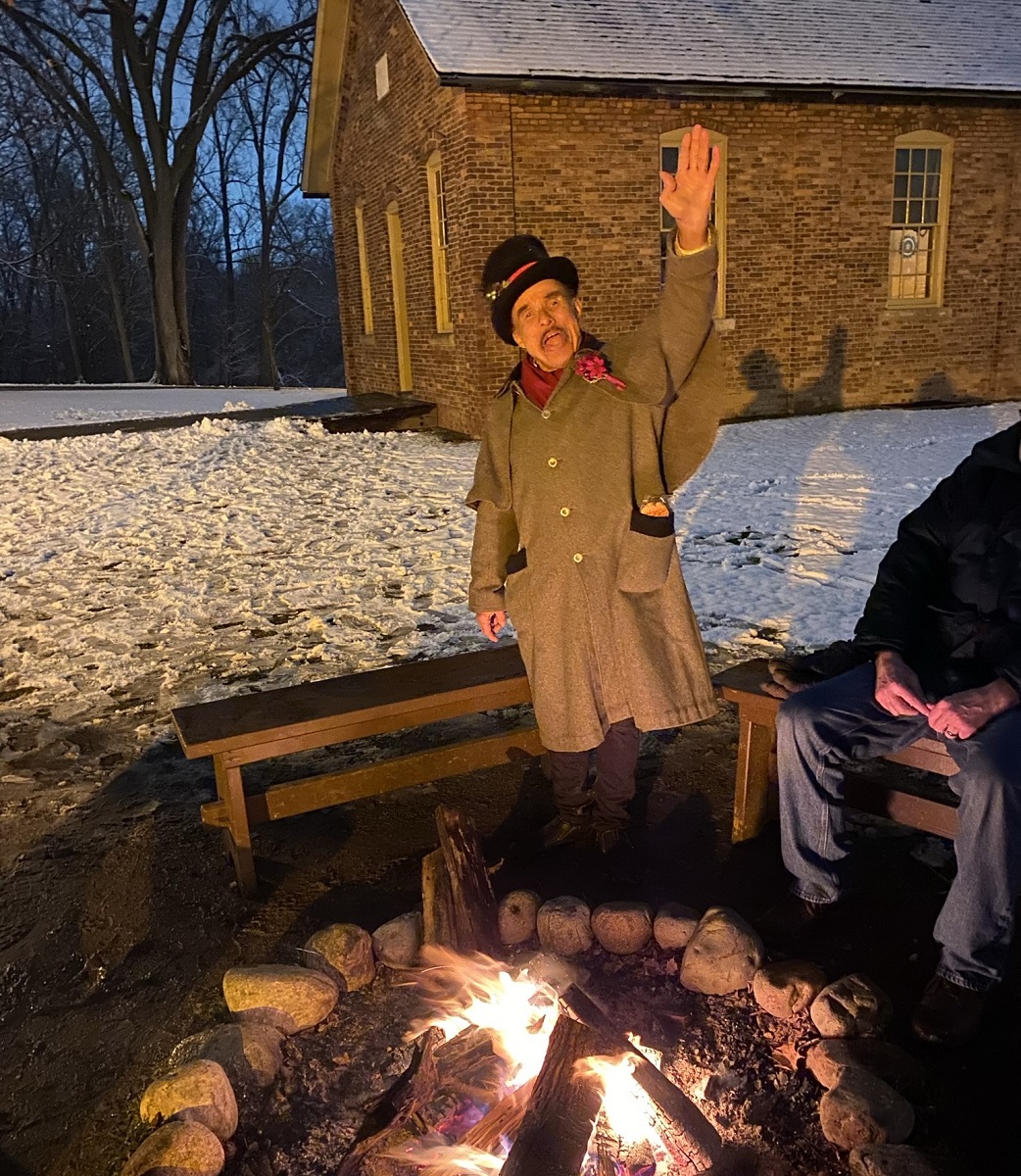 “The Night Before Christmas” program at Holiday Nights in Greenfield Village. / Photograph by Amy Nasir.

Guests of Henry Ford Museum of American Innovation and Greenfield Village have been captivated by our various dramatic programs for decades at The Henry Ford. And Anthony Lucas’ performances as an historical actor have been essential in bringing our stories to life throughout many time periods and historical contexts. I had the honor of sitting down with Anthony, 2010 winner of The Henry Ford’s Steven Hamp Award, to chat about his 20 years of theatrical work at The Henry Ford.

You’ve been performing at The Henry Ford since the fall of 2000. What was your first project here?

I started as a replacement actor when another actor was out sick, and I performed in a program called “Gullah Tales” near the Hermitage Slave Quarters. After this, they called me back to do more performances.

How did you get into acting and what inspired you to act?

My interest to become an actor goes back to when I was five years old, believe it or not. I used to watch a gentleman named Bill Kennedy, a local TV host in Detroit who would show a lot of black-and-white Hollywood movies on Sunday afternoons. I would watch actors like James Cagney, and I said in my mind: “Wow, I want to do that!” I have a lot of favorite actors, but James Cagney was the first one because of his energy and his versatility. He could play a lot of different roles other than playing the bad guy. All the movies I watched on Bill Kennedy at the Movies were very entertaining, and they made a big impression upon me, including all the musicals and the films that starred Shirley Temple, Humphrey Bogart, Edward G. Robinson, and Bette Davis—the Golden Age of Hollywood.

What were your first theatrical roles and when did you perform them?

I really didn't get the opportunity to act until at the end of the 11th grade in high school. The following year, I did two plays. One was kind of a historical play dealing with Black history. It was called “In White America,” and it was a series of vignettes and monologues about civil rights and the Black struggle for freedom in the United States. And the other play was a kind of comedy farce called “Day of Absence.” The story took place in the South, and it dealt with what would happen if one day all the Black folks had suddenly disappeared. My performances took place in the early 1970s. We were coming right out of the sixties with the civil rights movement and the Black power movement. And so that was my start. I went on to study theater at Western Michigan University and performed in various shows with Detroit Repertory Theatre and Plowshares Theatre Company. 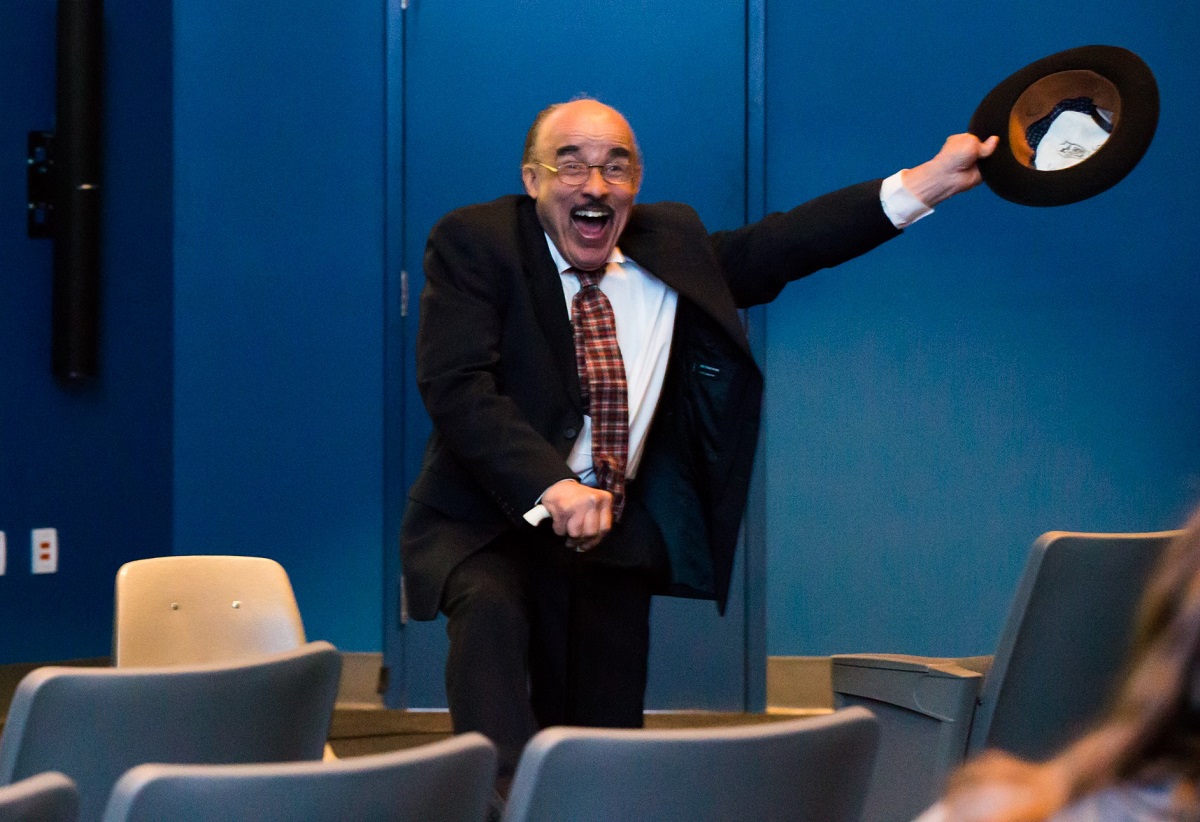 You’ve performed in several programs at The Henry Ford, which we’ll get into in a moment. But first, which one stands out as your favorite?

I love all the shows that I do, but one of my most favorite programs is “Elijah: The Real McCoy,” which I performed in both the village and museum. Elaine Kaiser, who has since retired [as Manager of Dramatic Programs at The Henry Ford], wrote it brilliantly. She wrote it for me to perform at Discovery Camp. Every show was very rewarding, and I just loved working with the kids during camp and seeing them at shows. The story starts with Elijah McCoy as a young kid, and the scenes travel through his achievements and struggles until he reaches his success as an inventor, and then into his old age. I loved to perform each stage of his life and see the kids’ reactions. 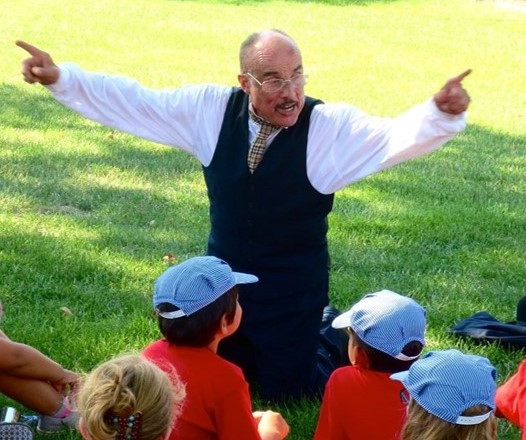 Have there been any challenges you’ve encountered while performing?

Well, here’s a story that’s kind of funny. One summer in the village, I was very busy. While I was at Town Hall doing a couple of Elijah McCoy shows, I would need to change into a different period costume and get to Susquehanna Plantation to do “North Star Tales” as fast as I could. And then I would hurry up and go back to Town Hall, change, and do another Elijah McCoy. Thankfully, Elaine Kaiser loaned me her bike, so I could ride it between shows. So, it was quite exciting! 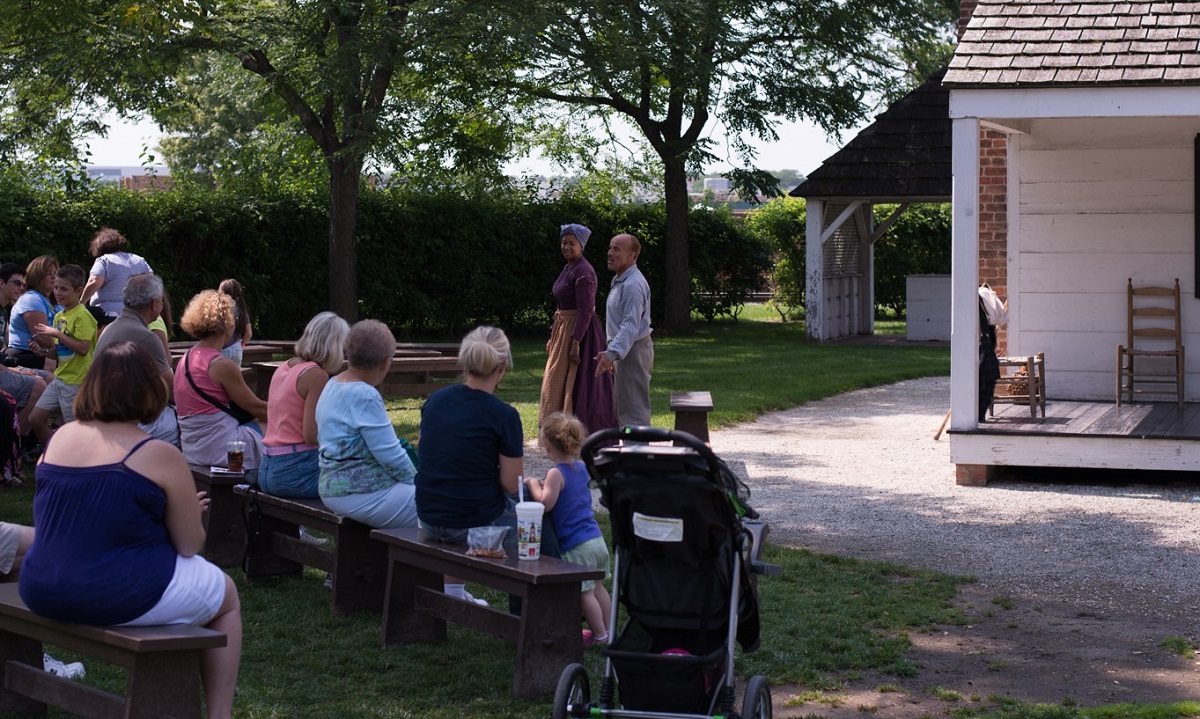 “How I Got Over” program at Susquehanna Plantation. / Photograph by Roy Ritchie

I’ve attended your performances at Susquehanna Plantation many times and have always been inspired when participating with other guests as we jumped from the porch steps yelling, “Freedom!” How long have you been performing at Susquehanna, and are there any other similar programs you perform in?

There were a few different shows we did at Susquehanna, and they go back to 2003, right after the renovation of the village. There is “How I Got Over,” “Tally’s Tales,” and a newer version called “North Star Tales,” which were all themed around the stories of slavery and endurance on the plantation. Last year in 2021, I narrated the North Star Gospel Chorale’s performance on the porch of Susquehanna as part of Salute to America: Summer Stroll. That was the first year, and it was really a great experience. We really enjoyed that. It's really a powerful show and I was happy to be a part of that. The Chorale also performed in the museum in February 2020, right before the pandemic, which was livestreamed on Facebook. 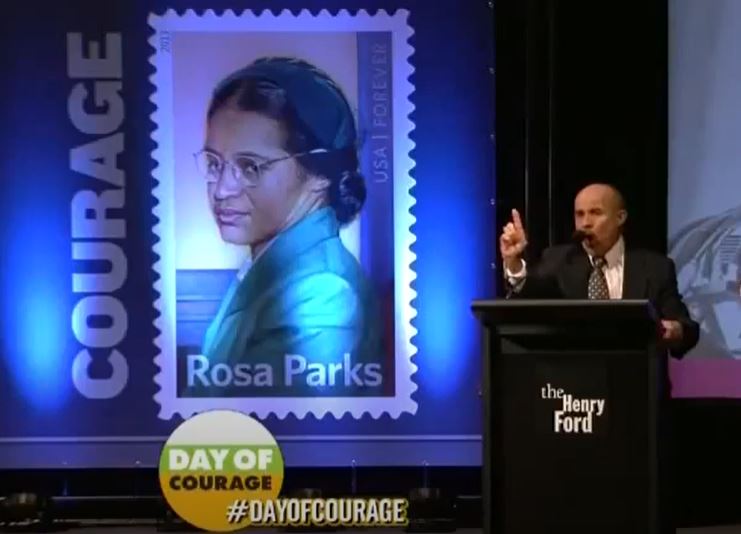 “I’ve Seen the Mountain Top” speech at National Day of Courage in the museum. / Screenshot from YouTube

You are also a big part of the “Minds on Freedom” program in the museum. When did that start and how did it develop?

Yes, this program started in 2004, and it was a combination of two shows—a musical act, and then a dialogue part about the Civil Rights Movement. It was merged into one show called “Minds on Freedom,” which was performed in the museum around our Celebrate Black History program in February. There was also our special celebration of the Emancipation Proclamation in June 2011, which I enjoyed being a part of. And during the National Day of Courage, celebrating Rosa Parks’ 100th birthday on February 4, 2013, I performed Martin Luther King, Jr.’s “I’ve Seen the Mountain Top” speech. That's always an honor any time I get a chance to express the words of Dr. King. He was a great man, a great orator, a great minister, and a great leader. And he gave his life for us to believe them. So any time you try to deliver his speeches, you’re never going to be like Dr. King. But I use my own approach and try my best to get the spirit across.

Oh, yeah, performing “The Tell-Tale Heart” by Edgar Allen Poe goes way back with me, because it was one of the first dramatic readings I recited in high school. My mother coached me. I think if my mother had pursued acting, she may have been a pretty good actress. She helped me bring the story to life. Around 2003, Elaine Kaiser asked me to dramatize this short story for Hallowe’en from the point of view of a murderer descending into paranoia, haunted by the thumping sound of the murdered man’s heart. The program is different from Holiday Nights, because I have set times for shows. So I usually don't have a chance to interact with the audience in-between shows as much as I would like. Interacting with the audience afterwards whenever possible is a special part of being there. I'm not there just because I'm an actor to do shows. I'm there to be a part of The Henry Ford and to interact with the guests and help create that experience for them. It’s very special, unique, and moving to interact with the guests. So that's how I approach it.

I started performing at Holiday Nights just before I performed at the Hallowe’en event. Initially around 2003, I was working with a few other actors, and we were moving around the village doing a variety of poems and Christmas carols. And it was around 2004, I performed Clement Clarke Moore’s “A Visit from Saint Nick,” which we generally call “The Night Before Christmas.”  I performed it as a solo act and was relocated outside of Town Hall and later to a warming fire. It’s developed into a very special event because of how guests react. There was one guy who proposed to his girlfriend at my warming fire. There are so many people with stories of their own, making Holiday Nights and the village a big part of their lives. Holiday Nights is a whole story in itself. I started adding an introduction to the performance rather than just solely dramatizing the poem. I started talking about Christmas in early America. And then I would ask guests about all the different holiday foods and dishes they like, and finally I would ask: Do you like Christmas cookies? I would then ask the big question: Do you have any with you tonight?

After this, guests started bringing me Christmas cookies every year. I come home with all sorts of cookies, sugar cookies, and chocolate chip cookies and all. Oh, yeah, it's funny. But it's great, though, because people come year after year and sometimes they tell me they used to bring their children and now they're all grown up. I'm like, wow, this is a reminder of how long I've been doing it. And it's so rewarding; sometimes I look out and see people that are moved. They get emotional and so it's wonderful. And the children are the best, they can just make you feel like a million bucks. In December 2020, I recited “The Night Before Christmas” for a video during the pandemic. That was a real different take on it because they had me come in and sit down and have a storybook in my hand. So I had to rework it so it could fit that format. And I like that too. It was very comfortable and warm. That was a real nice change of pace. 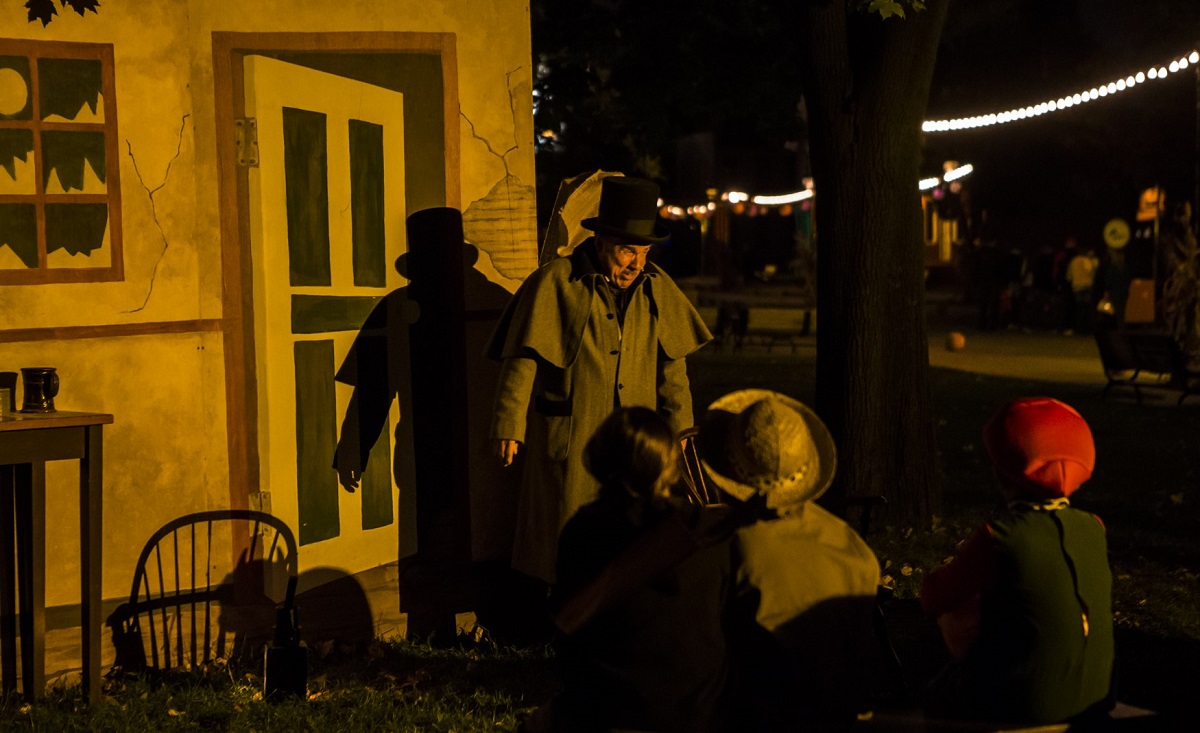 Sure. I was performing Elijah McCoy at the Town Hall one day, and there is a point where I would walk up the steps of the stage. I was playing the elderly Elijah, and I asked for volunteers from the audience to help me up the steps. So, this one little girl came up to me and she said: your tie is crooked. And she starts straightening my tie. Sometimes you just have to roll with it. That was a beautiful moment.

Another time, there was this couple that followed my shows. They took pictures of me performing Elijah McCoy in the village and “Minds on Freedom” in the museum, and other performances. The wife put together a scrapbook of their photos, and it had all these pictures and a beautiful cover. They gave it to me as a gift. I was just so speechless, you know, that they took time to create it over several months, putting this book together. I was very moved by it.