Unpacking the History of Labels 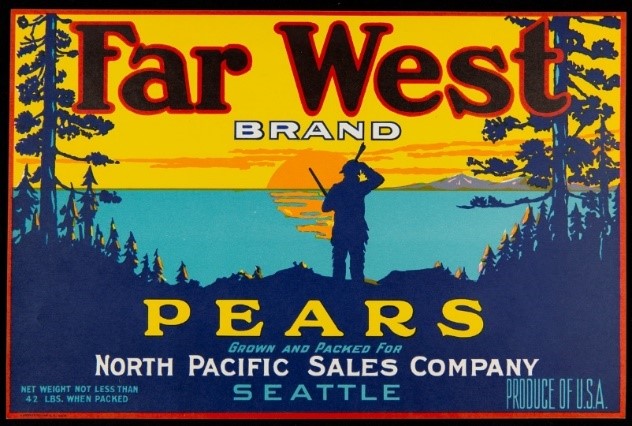 In the late 1800s, the preferred method of printing used to make image-centric labels like these was lithography. This process involved the transfer of an inked image from stone or metal plates to paper via a printing press. Skilled artists drew their images on flattened, smooth pieces of stone – traditionally limestone – to then be inked and transferred. Later, flexible, photosensitive metal plates were used on rotary and offset presses, making the lithographic process more efficient. The artists who worked in this medium were called lithographers. Some of the growers, as well as some of the packing and distribution companies, had their own lithography departments to produce labels. The majority, however, hired lithography companies to create their label designs.

The introduction of color into the lithography process, known as chromolithography, transformed the advertising industry. Multi-colored lithographs involved several transfers of the same image from multiple stones, or plates, each with their own color ink in the desired layout. The more colors included in the image, the more transfers (and stones/plates) required to produce the desired result. 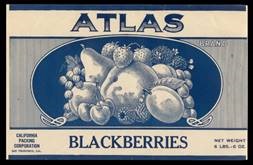 This label for Atlas Brand Blackberries is an example of single-color lithography and was produced through a single ink pass. The shading and variation seen in this image was created by the methods of stippling, linework, and applying different densities of the same color of ink to the page. The stippling method refers to the pattern of dots, which can be seen if you look closely at the fruit depicted on this label.

To enhance the attractiveness of a label some lithographers incorporated metallic pigments and dimensional, embossed areas into their designs. Metallic pigments created the shiny golden appearance that can be seen along the edges of this label for Holly Brand Yellow Cling Peaches.

Fruit Crate Labels
Before the 1860s, East and West Coast markets were essentially isolated. Because of differing climates, certain produce was only available to consumers living in the eastern United States during specific seasons while most produce in the West could be grown throughout the entire year. When the transcontinental railroad opened in 1869, eastern markets were opened to the West Coast produce industry for the first time. The railroad, along with the growing canning industry, allowed consumers to enjoy fruits and vegetables year-round – encouraging the establishment of more growers and packing companies in the West to meet the high demand. By the turn of the century and into the early twentieth-century, California fruit growers provided an abundance of fresh fruit to the national markets, transforming the American diet.

With greater competition among growers and packing houses, the crate label became an important marketing tool. At the time, grocers were the link between customers and the products. Grocers obtained their goods from wholesale markets, choosing their products by price and intuition. The label had to stand out and appeal to the grocer who would then buy several crates of the product and sell it in his store. If the grocer heard that customers liked a certain brand over previous ones he’d supplied, he could make sure to purchase that particular brand again, using the crate label for identification.

These fruit crate labels are often stunningly beautiful – more like mini-posters with broad color palettes, incredibly detailed images, and clever brand names. A common feature of label design was an image of where the fruits and vegetables were produced. Customers became enamored with the shining groves of oranges in the West and came to identify certain places with the best produce. Other labels feature popular motifs of the time and allow us to explore the trends in graphic design. 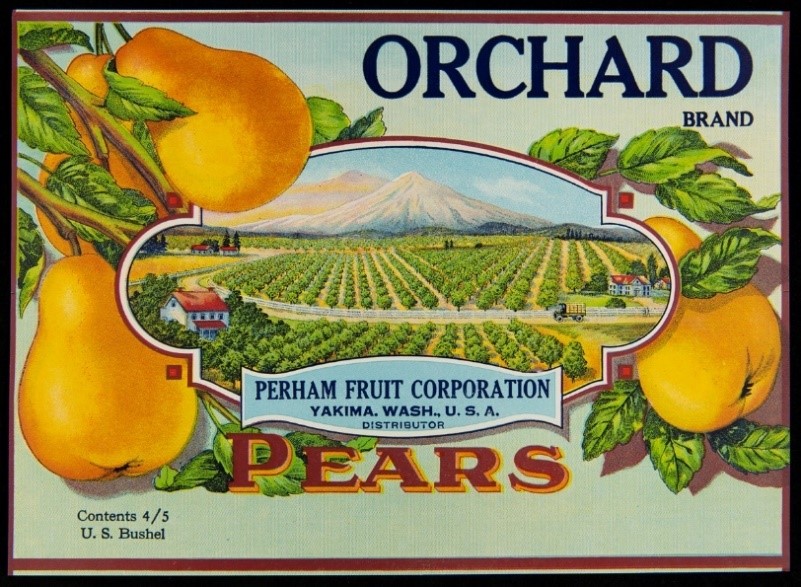 California wasn’t the only state on the West Coast to produce delicious fruit. Washington was known for its many varieties of apples as well as other fruits, including pears.

C. Mondavi & Sons’ “Bocce” label played up the family’s Italian roots, aligning its product with the quality grapes grown in Italian vineyards. This successful business was established by Cesare Mondavi, a Minnesota grocer and saloon owner who often traveled to California to select and ship grapes back home to make his own wine. After becoming enamored with the California climate, which reminded him of Italy, he moved his family to Lodi in 1923 to open a business growing and shipping grapes. His success allowed him to purchase a winery in 1946, which is still thriving today as C. K. Mondavi and Family. 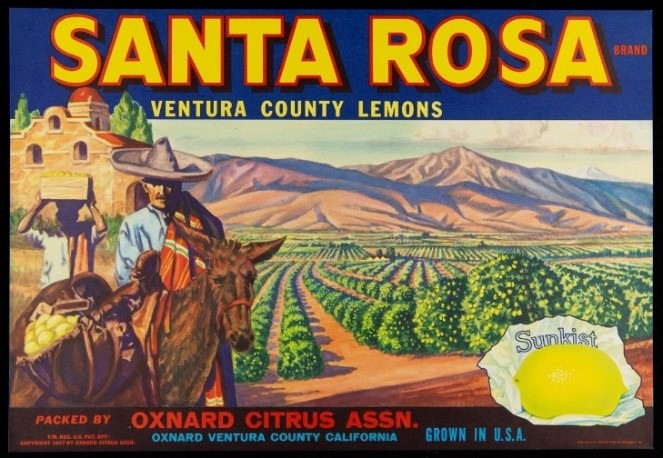 This label features the sprawling lemon groves in Oxnard, California. It also features the “Sunkist” logo, which became a popular brand known for its high-quality oranges and lemons.

Canned Food Labels
The process of canning food has been around since the early 19th century, with products used as wartime provisions for French and British armies. Tin cans allowed food producers to safely transport their goods without fear of them breaking – as was common with glass jars and bottles – making cans a more economical container for foodstuffs. While canned foods were introduced to America by the 1820s, the demand for these products came four decades later during the American Civil War.

Unlike glass jars or bottles, which allowed consumers to view the product inside, cans required identification. At first, labels were simply a tool to inform the customers of the product they were buying, who produced it, and where it was produced. As railroad networks expanded in the late 1800s and competition increased, more elaborate labels were created to appeal to customers in new markets across the country. The label became even more important after World War I when customers began selecting products for themselves in self-service grocery stores.

Using the same design for several different products became a strategy for helping customers find the brand with which they were familiar. Olney and Floyd’s Butterfly Brand products were easy to identify with their colorful, eye-catching labels and signature butterfly.

Characters were a common feature in product advertising. The goal was to create an emotional or personal connection between the product and the customer – a practice that is still seen in marketing strategies today.

As canned goods made their way across the country, certain states became known for specific products. Washington, for instance, was known for its salmon industry and canned salmon was shipped from the Pacific Northwest all across the United States. This beautiful label was created by the Schmidt Lithograph Company – one of the most well-known companies in the lithography industry.

If you enjoyed this small sample of labels, visit our Digital Collections to see other fruit crate labels and  canned food labels in our collection.