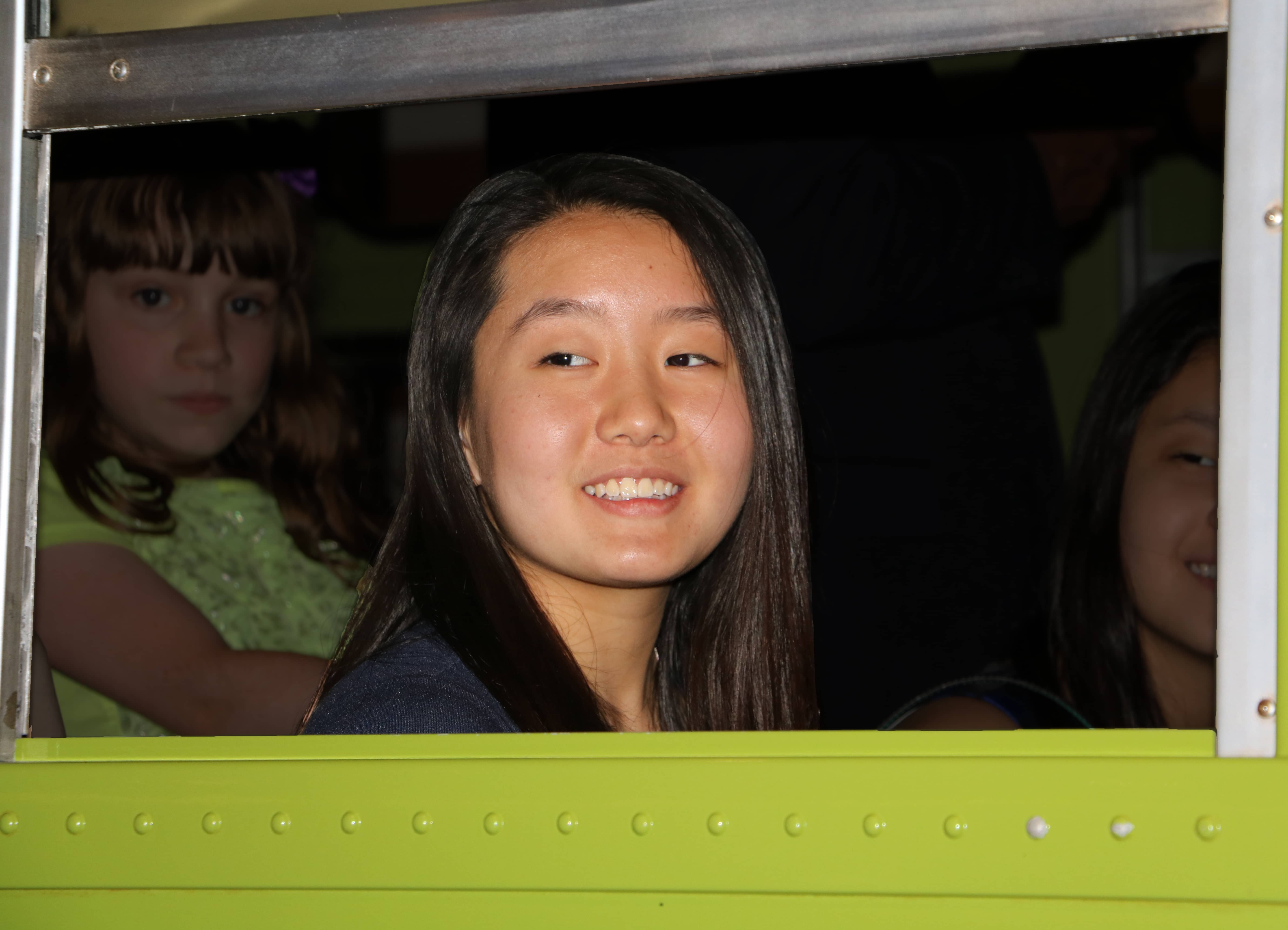 What did you do this summer?
Earlier this summer, winners of our 2015-16 Building Stories student creative contest visited Henry Ford Museum to tour the exhibit With Liberty and Justice for All. They had photos taken on the Rosa Parks Bus, a fitting memento of their hard work writing poignant stories on Rosa Parks, one of our nation’s most impactful social innovators. Please enjoy the story written by our grand prize winner, Yani Li, here. 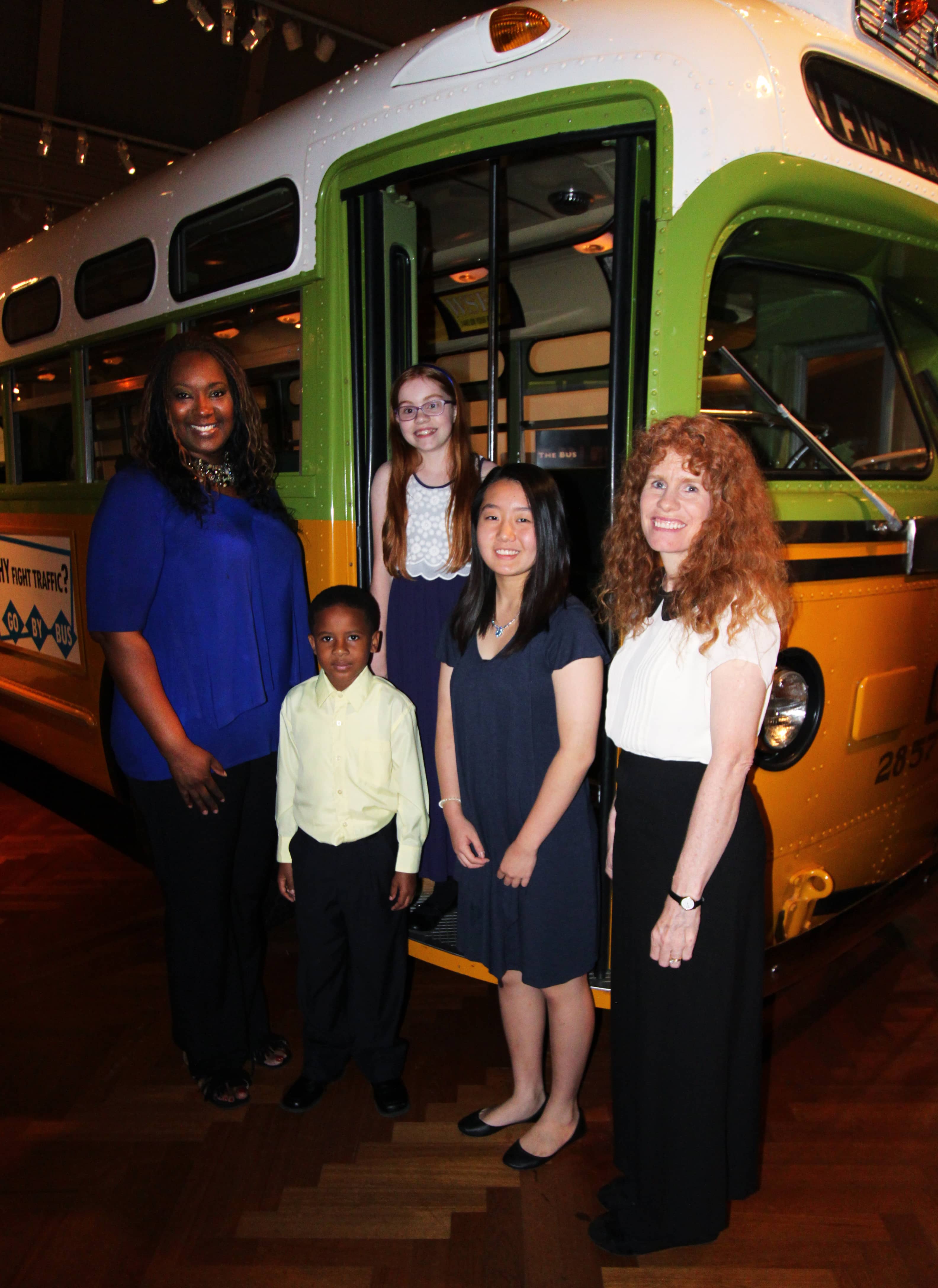 While the Building Stories contest has been cancelled moving forward so that The Henry Ford can reconsider its contest offerings, we encourage teachers to make use of the primary source “foundational materials” developed for Building Stories.

Catherine Tuczek is Curator of School & Public Learning at The Henry Ford.

On Feb. 4, The Henry Ford is celebrating what would have been Rosa Parks’ 100th birthday with a National Day of Courage. Mrs. Parks wasn’t looking to start a movement when she refused to give up her bus seat to a white man on Dec. 1, 1955, but instead was acting upon a courageous response to her instincts. Mrs. Parks later said of that day, “When I made that decision, I knew that I had the strength of my ancestors with me.”

In 2001 The Henry Ford became the home to Montgomery, Ala., bus No. 2857, the very bus that Mrs. Parks refused to give up her seat on. The bus has become a symbol for courage and strength as many believe Mrs. Parks’ actions that day sparked the American Civil Rights Movement.

Starting the National Day of Courage off is American Civil Rights activist and leader Julian Bond. In the 1960s Mr. Bond founded the Student Nonviolent Coordinating Committee and would later go on to serve as chairman of the NAACP. Joining him during the day are contributing Newsweek editor Eleanor Clift, Rosa Parks biographers Jeanne Theoharis and Douglas Brinkley, and author and Wayne State University Assistant Professor Danielle McGuire.

Today we’re excited to announce that in addition to a day packed with activities, The Henry Ford will be dedicating the new Rosa Parks Forever stamp from the United States Postal Service.

The new stamp, showcasing a portrait of Mrs. Parks, will be available for purchase and cancellation at Henry Ford Museum all day.

On site with us on Feb. 4 will be USA Network’s “Characters Unite” public service campaign. Visitors can learn more about the campaign and create a special souvenir.

Admission to Henry Ford Museum, from 9:30 a.m .to 9:30 p.m., is free that day thanks to Target and another installment of their Target Family Days.

Our celebration of Mrs. Parks and her courage isn’t just here in the museum. No matter where you are you can participate digitally as we share stories of hope and inspiration.

Online we’re asking individuals to post their messages of courage by sharing a digital Facebook badge. We even have a plain badge that you can download and write your own message on. If you do, make sure to take a picture of yourself wearing it and tag us on Facebook or Twitter with the hashtag #dayofcourage.

Thanks to our partners at Detroit Public Television, a live stream of the day’s events will be available to watch online. You can find that link here. After the National Day of Courage, make sure to visit DPTV’s website for additional interviews and highlights.