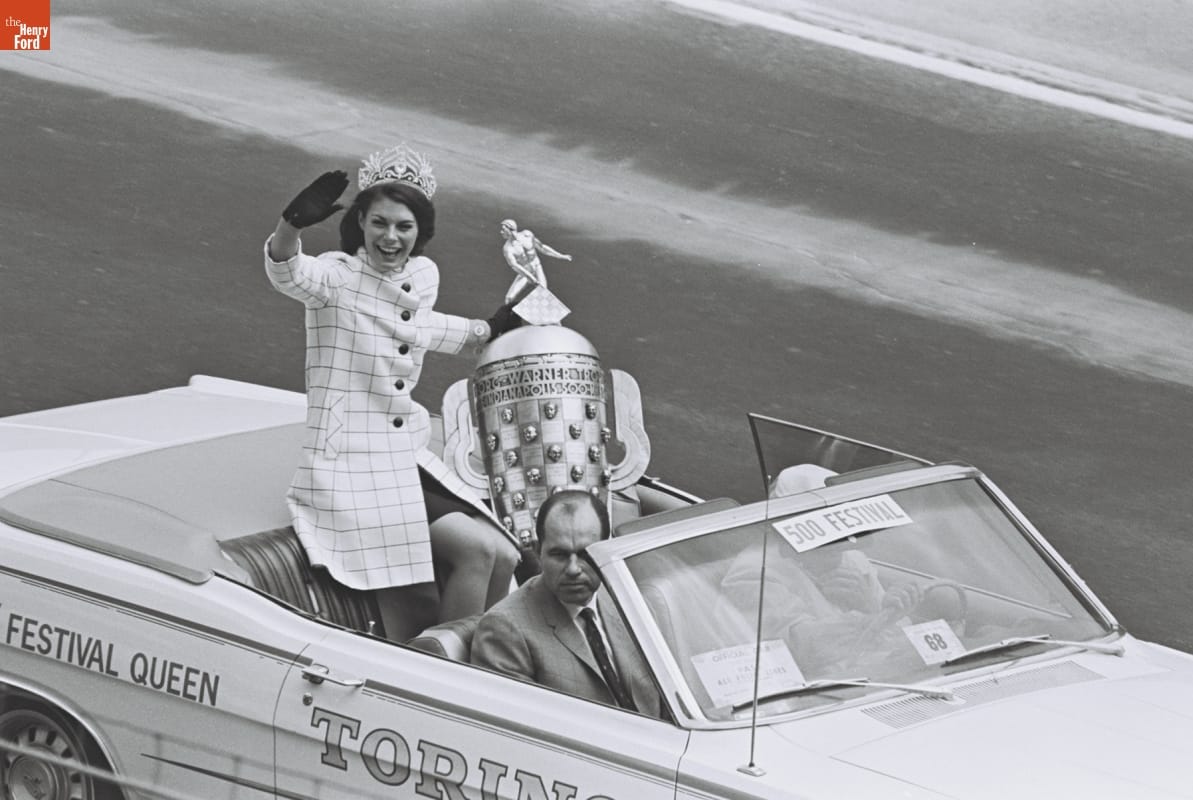 The Greatest Spectacle in Racing

Say "Indianapolis" and everyone immediately thinks "500." Yes, we’re talking about the greatest spectacle in racing.

The Indianapolis 500-mile race and its venue, Indianapolis Motor Speedway, are the grandparents of American races and race tracks. The 2.5-mile rectangular oval was constructed in 1909 and paved with 3.2 million bricks, which prompted the moniker, “The Brickyard.” A three-foot strip of bricks remains today at the start/finish line. The first Indianapolis 500 ran in 1911, and Ray Harroun won, driving a Marmon Wasp on which Harroun installed a rear-view mirror he had designed—the first ever used on an automobile. His average speed for the 500 miles was 74.602 mph. At present, the fastest 500-mile average speed was set by Tony Kanaan in 2013 at 187.433 mph.

As the 500 grew in importance, it soon became America’s most famous auto race and attracted interest globally. Out of the track’s fame, the name "Indy Car” soon was applied to the open-wheel cars that toured the United States (and much later were included in races in Canada and Mexico), but the Indianapolis 500 always has been the biggest, most important event on the calendar: “The Greatest Spectacle in Racing.”

Our new exhibit, Driven to Win: Racing in America presented by General Motors, has an entire section on Indy Car racing, in which you’ll find some key vehicles and other artifacts related to this grand tradition. 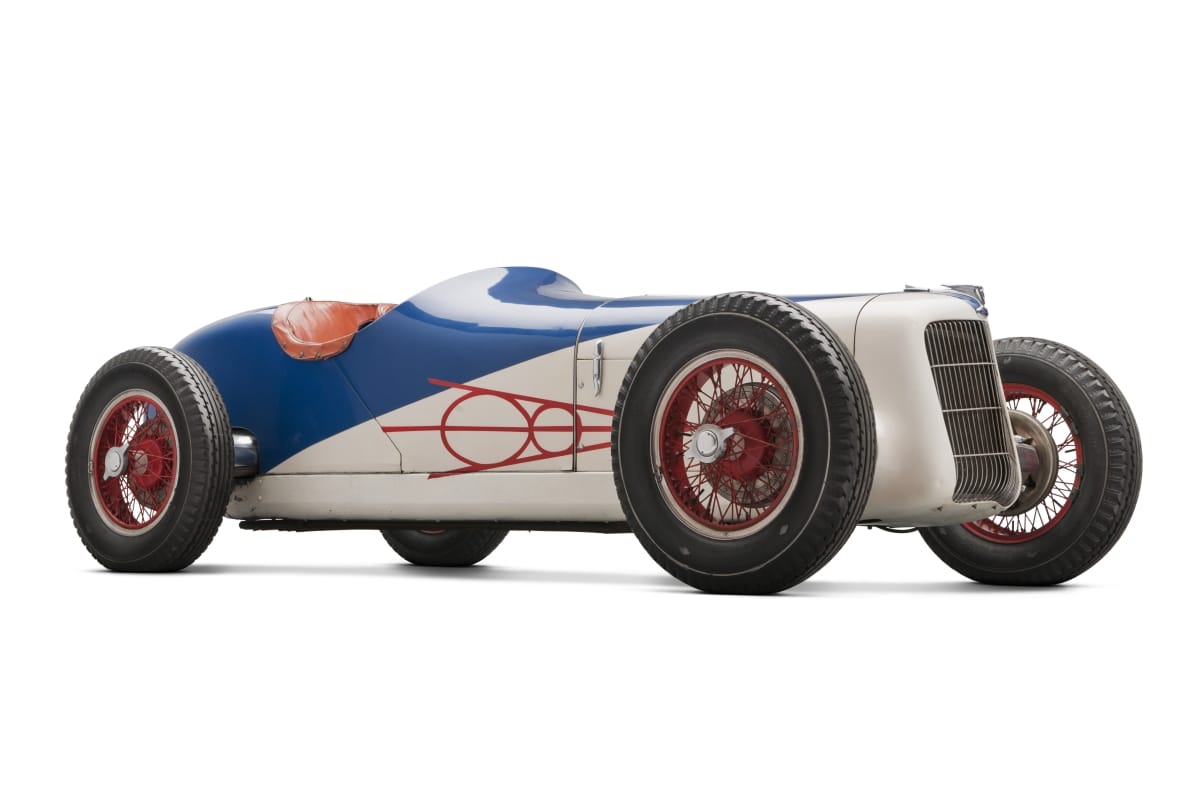 For the 1935 Indy 500, Henry Ford entered a factory team of cars, designed by Harry Miller and powered by modified Ford V-8 engines. This car is one of ten that were built. Miller was the most important American racing designer before World War II. His legacy includes the 4-cylinder Offenhauser engine (for an example, check out the Meskowski-Offenhauser, which you’ll also find in Driven to Win), plus innovation, superb craftsmanship, and artistic touches like the aerodynamic, cast-aluminum suspension arms that could be pieces of sculpture. This car is lower and more streamlined than any other 1935 race car, with four-wheel drive and independent suspension, front and rear—unheard of back then. Unfortunately, the project had insufficient development time, and the car had a flaw that abbreviated testing didn’t reveal until it was too late. The steering box was mounted too close to the exhaust manifold, and eventually the exhaust heat caused the steering to seize up. All the Miller-Ford cars that qualified for the 500 dropped out. 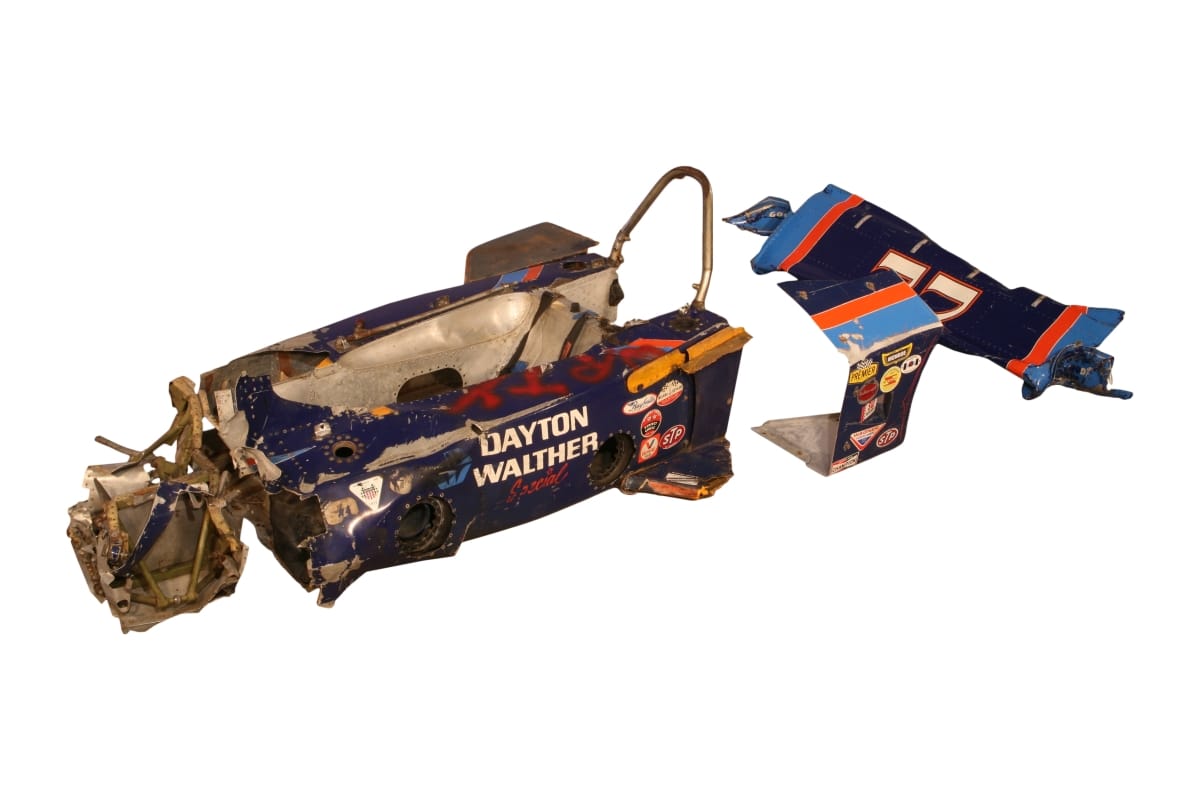 This collection of parts is the remnants of one of the most horrific crashes in Indianapolis 500 history. It reminds us that auto racing, while much safer than it used to be, will always be dangerous. In a melee of cars on the front straight at the start of the 1973 Indy 500, this car, driven by David "Salt" Walther, crashed into the outside wall and flipped into the retaining fence. A fuel tank ruptured and the methanol fuel burst into flames. The front of the car ripped off, and videos show Walther's feet dangling outside. He was badly burned, and some spectators also were burned, but there were no fatalities. In spite of his severe injuries, Walther came back to race again in 1974. Safety equipment like a helmet, fire-resistant clothing, a roll bar, and rubber fuel tank liners helped Walther survive, but the crash also triggered some changes to safety rules. Smaller fuel tank capacity reduced the risk of fire, smaller rear wings were mandated to reduce speeds, and the track updated many of its rapid-response procedures. 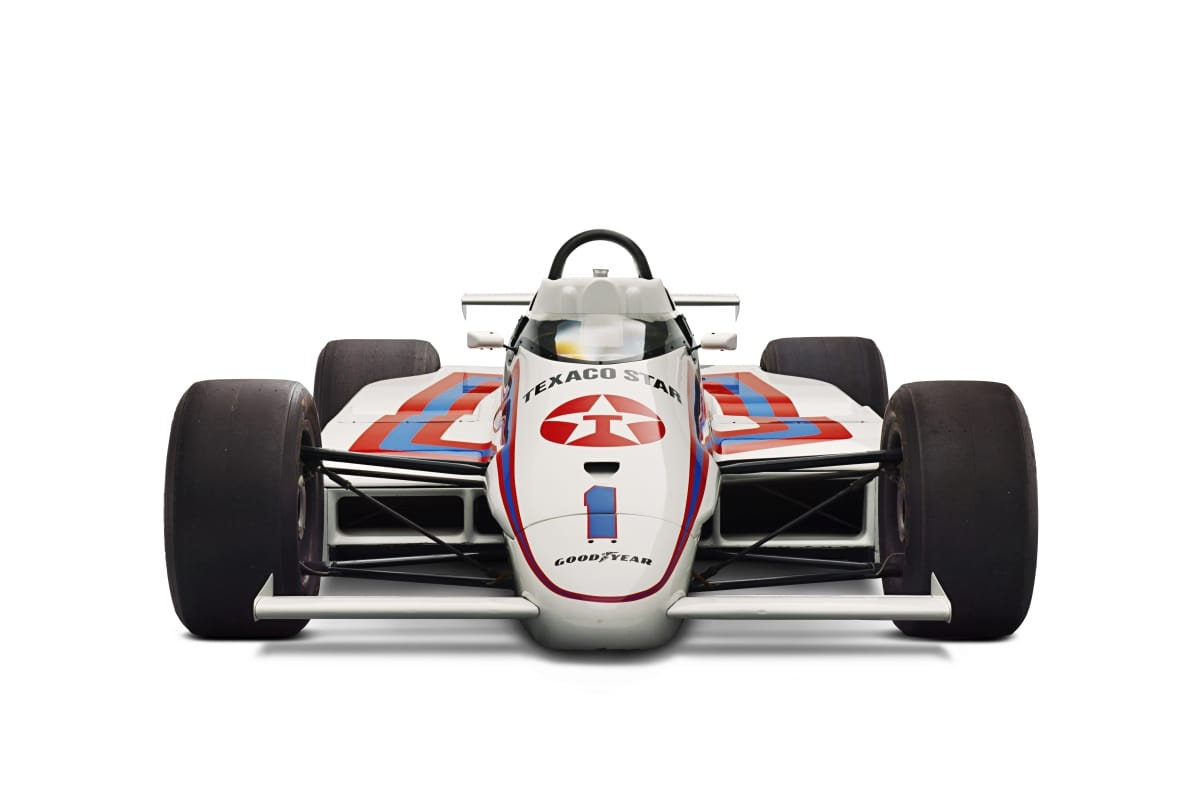 Tom Sneva qualified on the pole for the 1984 Indianapolis 500 in this car, with a four-lap average of 210.029 mph. He was the first driver ever to qualify at more than 200 mph. The car is powered by a 159-cubic-inch Ford/Cosworth V-8 engine that produces some 740 horsepower. This car’s design and engineering follow trends that began in the 1970s and are still seen in today’s Indy Cars. The front and rear wings generate aerodynamic downforce to help the car’s tires grip the road. Its cooling radiators are mounted in the side pods, and the bodywork under the pods is shaped to create a low-pressure area that adds more downforce to essentially suck the car down onto the track. The monocoque chassis is made with both aluminum and magnesium. Today’s Indy Cars still have wings and side pods, but the monocoque chassis are now fabricated from carbon fiber. 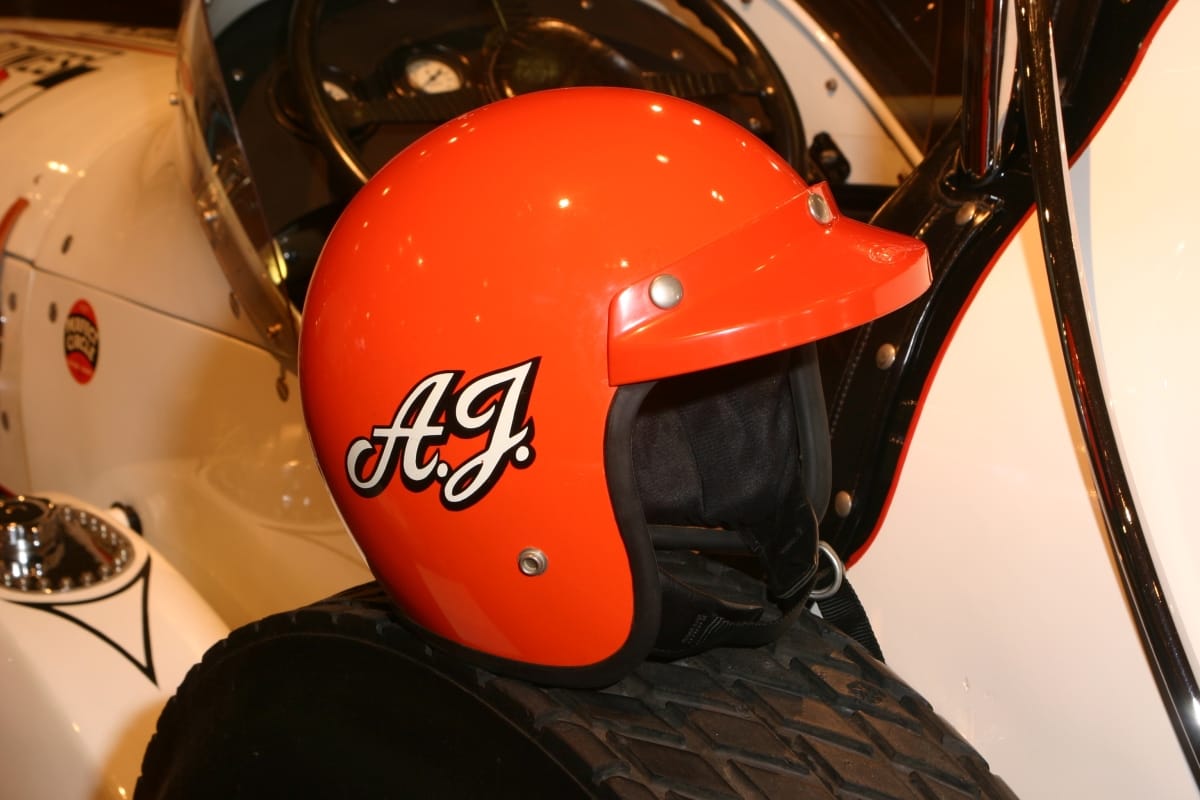 Beyond the cars, you can see these artifacts related to Indy Car racing in Driven to Win. 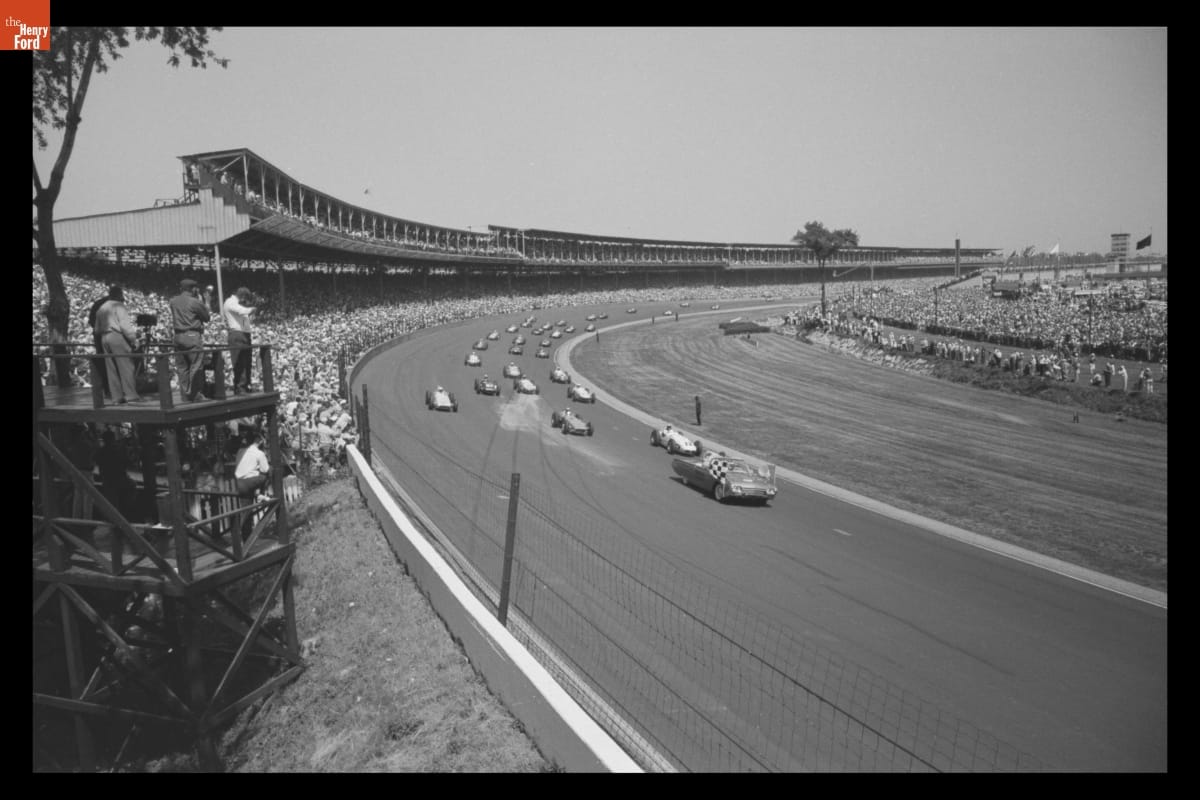 Learn more about Indy Car racing with these additional resources from The Henry Ford.