Making it Wright: Restoring a Piece of the Cycle Shop 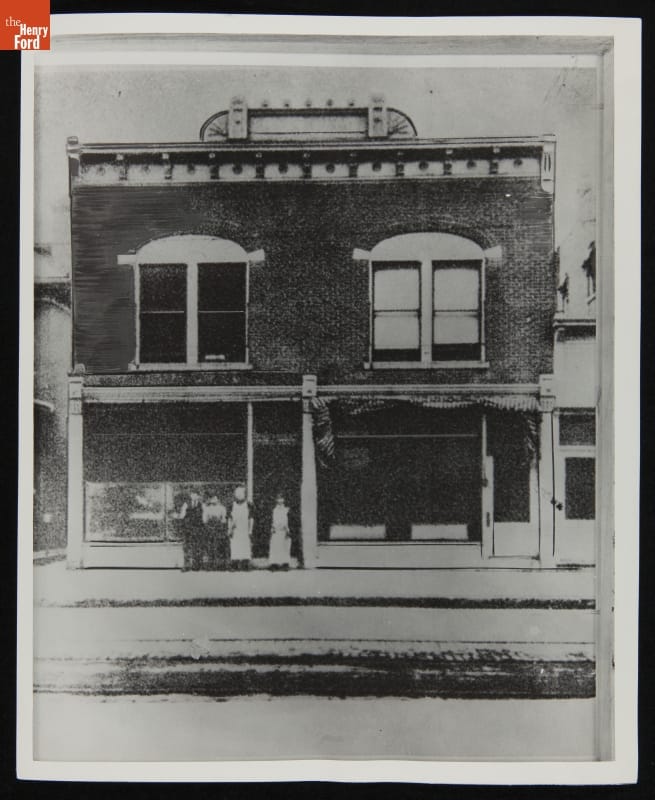 This photograph was taken some time between 1905 and 1911. Why? The sign in the front window of the storefront adjacent to the Wright Cycle Shop shows an undertaker’s business run by L.G. Keller. City of Dayton business directories of this period show Mr. Keller in business at 1127 West Third Street during this span of time. Clearly shown is the C .Webbert Block sign on top of the building and the Wright Cycle sign as well. Bicycle production and sales had ceased by 1905, but until 1909, airplanes and airplane engines were being built and partially assembled here. / THF236870

In 1903, the building that houses the Wright Cycle Shop and the undertakers’ establishment of Fetters & Shank was collectively known as the C. Webbert Block. The building was moved to and restored in Greenfield Village in 1937. It’s a very faithful representation of the two-story, two-storefront building that stood at 1125-1127 West Third Street in Dayton, Ohio, restored to appear as it did at the time of the Wright Brothers' first flight. There was one exception, though—the decoratively lettered sign that graced the top of the bracketed cornice spanning the front façade of the building was missing for over 100 years.

Charles Webbert, a relative by marriage to Charles Taylor, the Wright Brothers' mechanic, purchased the building in 1896. Mr. Webbert did an extensive addition to the front that created the double storefront we see in historic photographs. The Wright Brothers were his first tenants. Mr. Webbert was a plumbing supplier, a bicycle enthusiast, and, later, a great supporter of the brothers’ flying efforts. He was friends with Orville and Wilbur, and purchased and bartered both bicycles and bicycle repairs. Rent payments were dependent on what bicycle services were provided.

Between 1897 and 1916, the building saw a variety of uses by the Wright Brothers. Initially, the focus was on bicycles, including two lines of hand-built enameled finished bicycles, the Saint Clair and the Van Cleve. In the late 1890s, bicycles were a lucrative business and the proceeds from the Wrights' successful business became the funding source for everything that would eventually allow the Wright Brothers to fly. 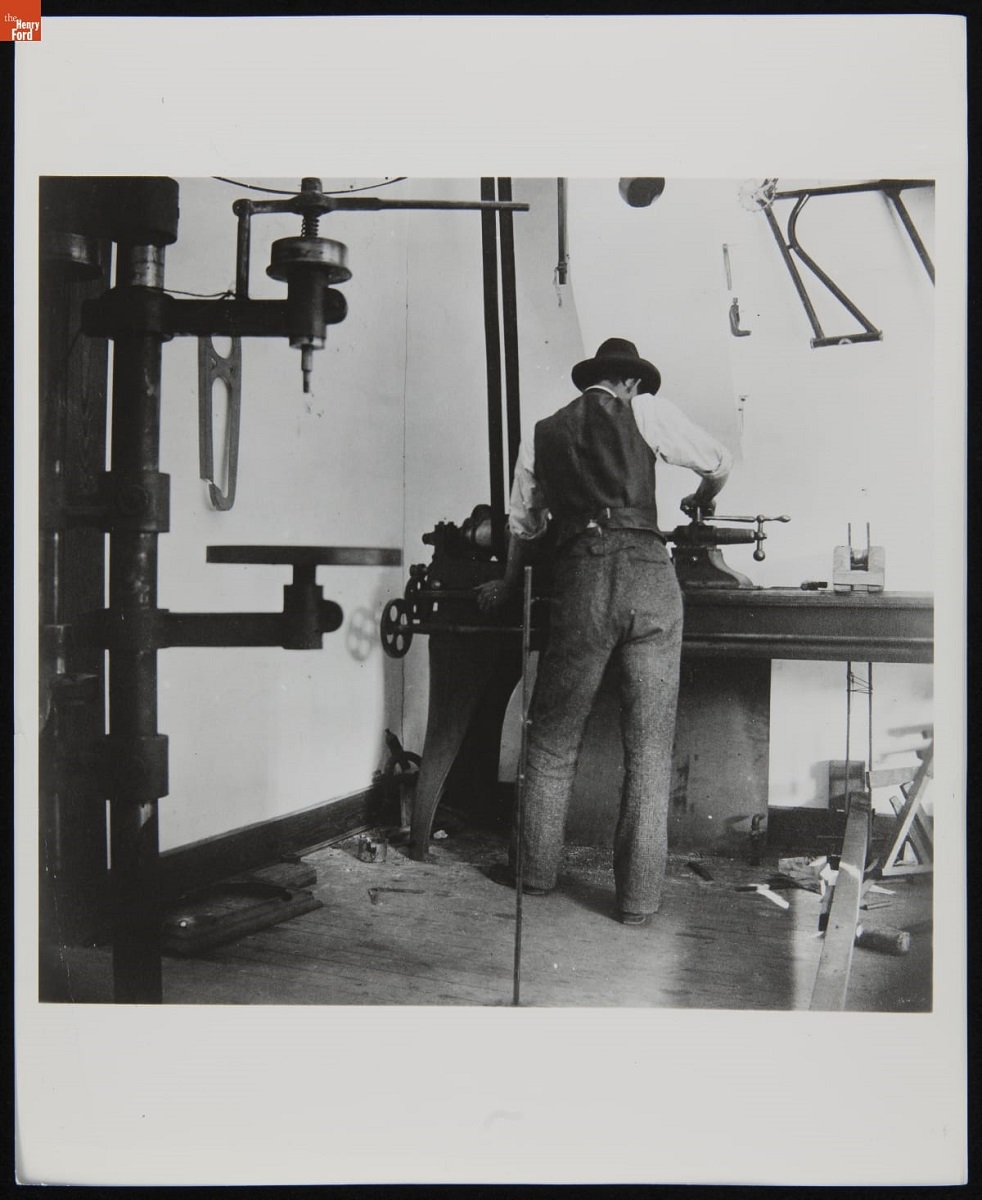 From 1899 until 1909, the building served as the brothers' first experimental laboratory and design studio, dedicated to creating that first flying machine. The first gliders, as well as the first Wright Flyer, were built in sections in the back machine shop, along with the gasoline engines that powered the first flight. For a time, the Wright Cycle Shop was one of the world’s first airplane factories. Following the sale of their first airplane to the U.S. Army Signal Corps in 1908, Orville and Wilbur attracted the attention of New York investors and the Wright Company was formed in 1909. The airplane business quickly outgrew the space, and the assembly of airplanes consequently took place in a rented space in the Speedwell Motor Car Company while awaiting completion of a new factory building. The Wrights broke ground on this new facility on Home Road in Dayton in 1910.

After 1909, though manufacturing and final assembly moved elsewhere, the gasoline-powered engines continued to be machined and assembled in the Wright Cycle Shop. Both brothers also kept offices on the second floor, along with their company files and archives.

Following Wilbur’s death from typhoid fever in May of 1912, Orville took over as president of the company and ran the business alone. In 1915, he sold his interests and retired from the Wright Company. He continued to work on aviation design with his own firm but gave up the lease at the Cycle Shop in November of 1916, permanently moving to 15 North Broadway, a few blocks away.

Based on photographic evidence, the C. Webbert sign remained in place from 1897 until 1919, when significant structural changes took place. These included the addition of another bay and a third storefront, later to become 1123 West Third Street. Historic images show the building in its final iteration, as Henry Ford would have first seen it. By the time of the 1919 renovations, the building needed significant repairs, in part due to a huge flood that ravaged downtown Dayton and its neighborhoods in the spring of 1913. Water levels reached nearly to the second floor of the building. By this time, it’s very likely that the sign had deteriorated to the point where it was not practical to redesign it to fit with the new façade, and so it was likely removed. 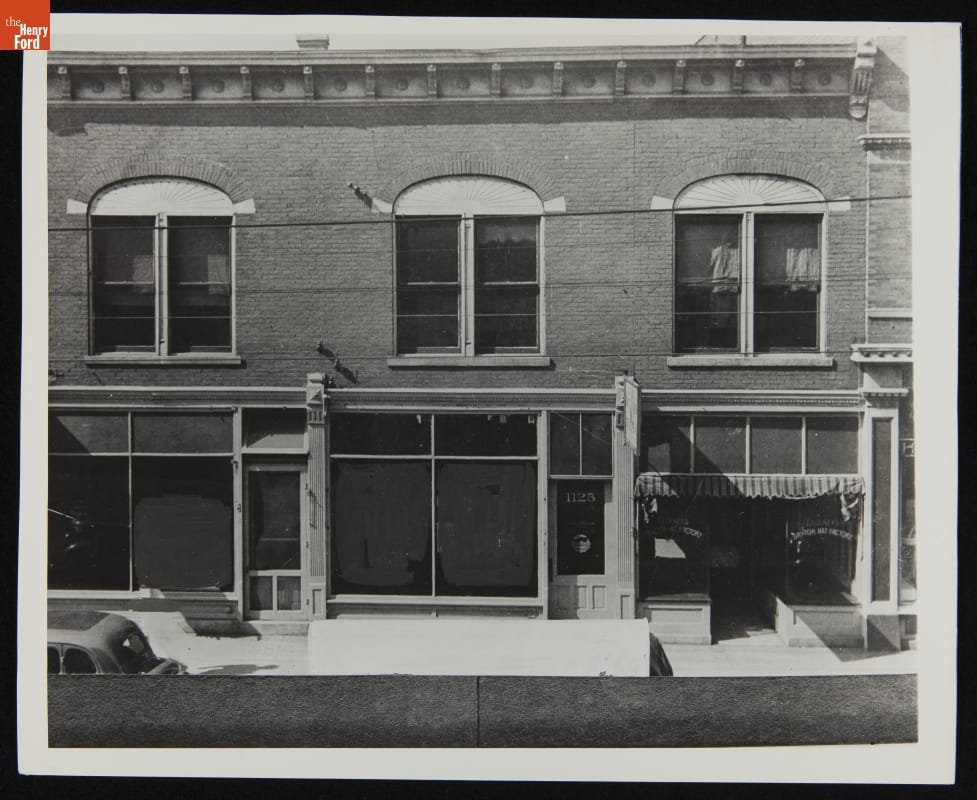 This photograph of the vacant building taken in October of 1936 is part of a series taken after Henry Ford purchased the building from Charles Webber, in preparation for dismantling the building and shipping it to Dearborn, Michigan. Its reconstruction in Greenfield Village, without the C. Webbert sign, was completed in the Spring of 1938 with the dedication taking place on April 16, which would have been Wilbur Wright’s 71st birthday. / THF236872

Henry Ford purchased the building from Charles Webbert in 1936 with the understanding that it would be dismantled and moved to Dearborn, where it would be reconstructed in Greenfield Village. For reasons unknown, the sign was never added to the Wright Cycle Shop when it was restored in Greenfield Village in 1937. This is surprising, as it is such a significant architectural element. In 1991, another major restoration of the building took place in the Village, and again, the sign was not included in the project.

As they say, the third time’s the charm.

In 2018, research work began, focused on recreating the sign to more accurately represent the building’s appearance in 1903. In 2019, Mose Nowland, one of our talented conservation department volunteers, created detailed construction drawings based on high resolution scans of original photographs showing the sign still in place. Mose had only a few photographs, taken several years apart, to work with. True to form with his decades of experience, his finished drawings were works of art themselves, and brought to life the exquisite details included in what was the finial crest for the newly-designed façade of the building. 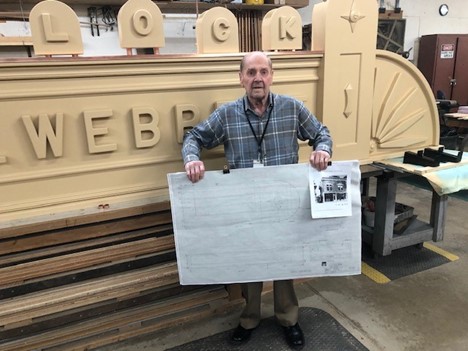 Mose Nowland poses with one of his detailed architectural drawings, which allowed the C. Webbert sign to come to life again after being missing for 100 years. / Photo by Jim Johnson

Using these wonderful drawings, combined with Mose’s sound advice and suggestions, Mike Zemney, one of our talented carpentry staff, began the construction of the sign. The sign was built in sections, with each decorative element individually hand-crafted, just as it would have been in 1897. Mike used a wide range of techniques and materials, with the ultimate goal of making the sign as weather-proof as possible, with a minimal amount of maintenance required. The sign is a combination of several kinds of water-resistant wood species, copper flashing, and cladding, all carefully sealed. The decorative elements are all three-dimensional, and the sign reaches nearly four feet high and over seven feet long, in perfect proportion to the height and width of the building. 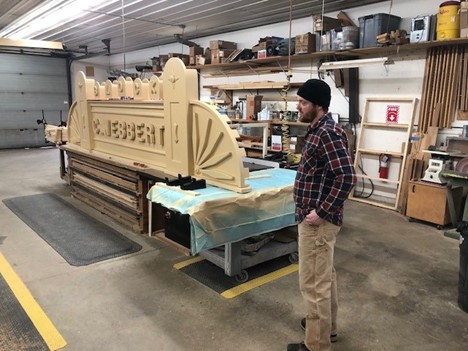 Carpenter Mike Zemney with the nearly completed sign he built. In this photograph, the sign has been painted and dry fitted together, with final assembly, sealing, and final painting to take place once it was lifted up onto the building.

Using high-resolution versions of historic photographs, we carefully studied and analyzed these images to determine the color combination to use in painting the sign, along with the rest of the building. What appear to be different colors in some of the photos are actually shadows, as the photographs were taken a few years apart, at different times of the year, and at different times of the day. Based on our analysis, it appears that the building and the entire sign were monochromatic, painted all one color. This was not an uncommon practice for commercial and industrial buildings in the late 19th and early 20th centuries. The sign, therefore, was completely covered in many coats of a high-quality paint by Jeff Serwa, one of our dedicated painters.

There were great hopes of completing this project and having everything installed for the opening of Greenfield Village in April of 2020. As we all know, 2020 took a very different direction, and the actual installation of the sign was delayed.

However, I am very happy to announce that over 100 years later, the Wright Cycle Shop is now complete once again, proudly claiming its rightful place as part of the C. Webbert Block.

The sign is lifted onto the top of the building. 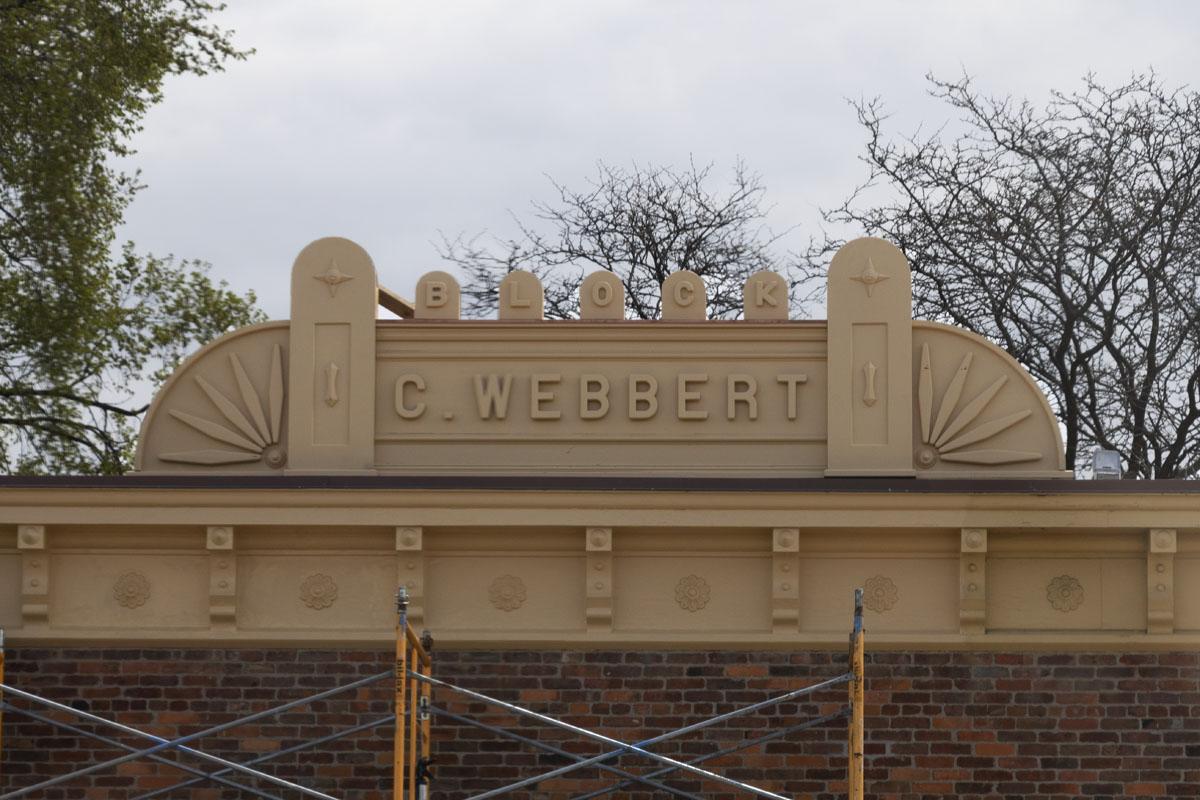 
Jim Johnson is Director of Greenfield Village at The Henry Ford. Special thanks to the staff and volunteers of The Henry Ford that made this project possible: Mose Nowland, Mary Fahey, Ben Kiehl, Dennis Morrison, Robert Smythe, Mike Zemney, and Jeff Serwa.