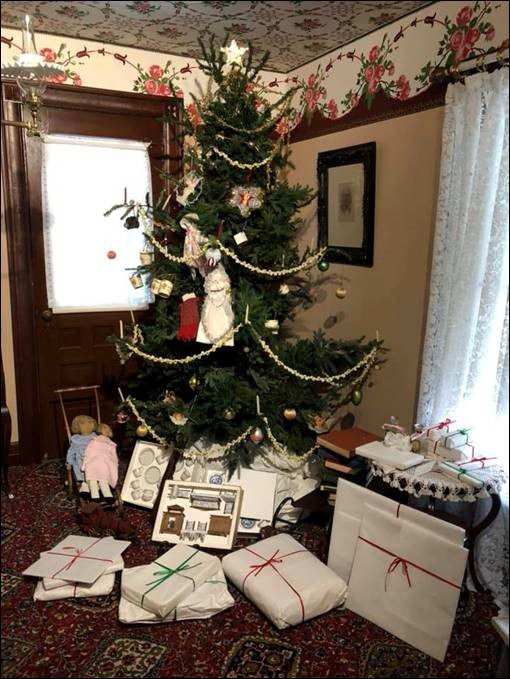 During Holiday Nights in Greenfield Village, we really enjoy showing how Americans would have celebrated Christmas in the 19th century. In almost all the houses, we use historical primary sources to try to glean out descriptions of what people may have done—but we have almost no concrete visual evidence. However, one huge exception is the Wright Home, the family home of Wilbur and Orville Wright.

We know from various sources that in 1900 there was a big homecoming in Dayton, Ohio. Reuchlin Wright, one of Wilbur and Orville’s older brothers, was returning home from living apart for a very long time, slightly estranged. In celebration, the family decided to put up their first Christmas tree. Wilbur and Orville, who were amateur photographers but probably as good as any professional of the time, documented some of that process.

Within the last decade, we have been able to access a very high-resolution image of the Wright family Christmas tree image from the Library of Congress, and the details just leapt out at us. This photograph, which we know was taken in 1900, documents exactly how the Wright Brothers designed and put up their Christmas tree. We examined all the minutiae in the photo and have attempted to recreate this tree as exactly as possible. 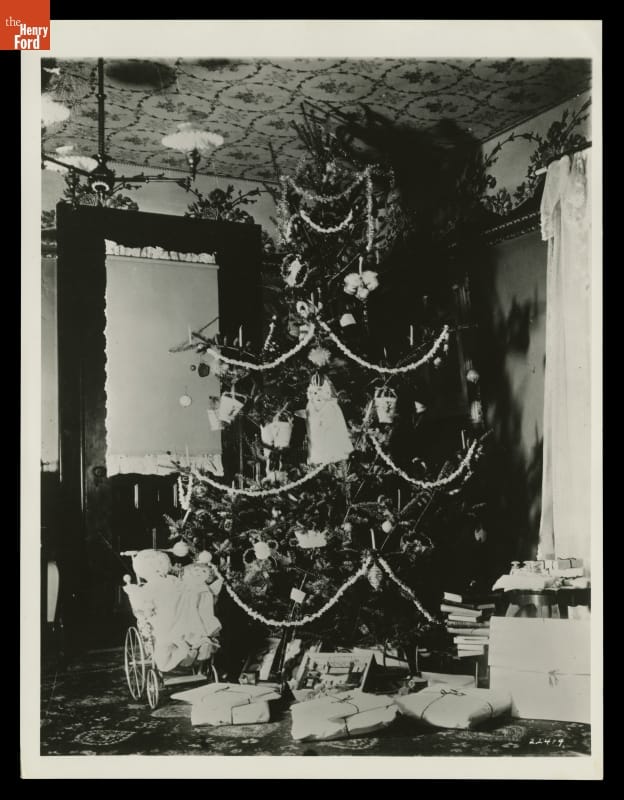 The toys, the various ornaments—it's all in line with what's typical in the time period. So if you look at the tree in the Wright Home, you’ll see it lit with candles—this is not an electrified house yet in 1900. There's a variety of ornaments designed to hold candies and similar things. It has strung popcorn, which would have been homemade, but it also has store-bought German tinsel garland, glass ornaments (either from Poland or Germany), and all kinds of additional decorations that may have been saved from year to year. There's a homemade star on top that has tinsel tails coming off it.

For many years, we just had a low-resolution, fuzzy photograph of the tree, and we reproduced things as faithfully as we could—for example, what appeared to be a paper scrap-art angel. The first glimpse of the high-resolution photograph absolutely flabbergasted us, because front-and-center on the tree is a little scrap-art of a screaming, crying baby. It must have been some sort of inside joke within the family. We were able to reproduce it exactly as it would have looked on the tree.

The screaming baby scrap-art on the Wright Home Christmas tree, both in the original photo and during Holiday Nights in Greenfield Village.

In keeping with tradition, the tree is also covered with gifts for different members of the family. It seems that the adult gifts were hung unwrapped on the tree, whereas many of the children's things were either wrapped or just placed under the tree, based on the photograph. For example, on the tree, we see a pair of what are known as Scotch gloves—you would have found examples of these in Sears catalogues of the early 1900s. There's also a fur scarf, toy trumpets, and even a change purse, all hung on the tree.

Scotch gloves hanging on the Wright Home Christmas tree, both in the original photo and during Holiday Nights in Greenfield Village.

Beneath the tree, the arrangement of toys and gifts is quite fun. There’s a pair of roller skates, a little toy train, tea sets, furniture sets, and all kinds of different things geared specifically toward all the Wright nieces and nephews who would have come to visit on that Christmas morning.

There's also a wonderful set of photographs associated with the tree after Christmas. For example, there’s one of Bertha Wright, one of Reuchlin’s middle daughters, in the next room over, sitting playing with her toys. She's clearly been interrupted in her play, and you can see that in the expression on her face: “Okay, let's get this over with.” 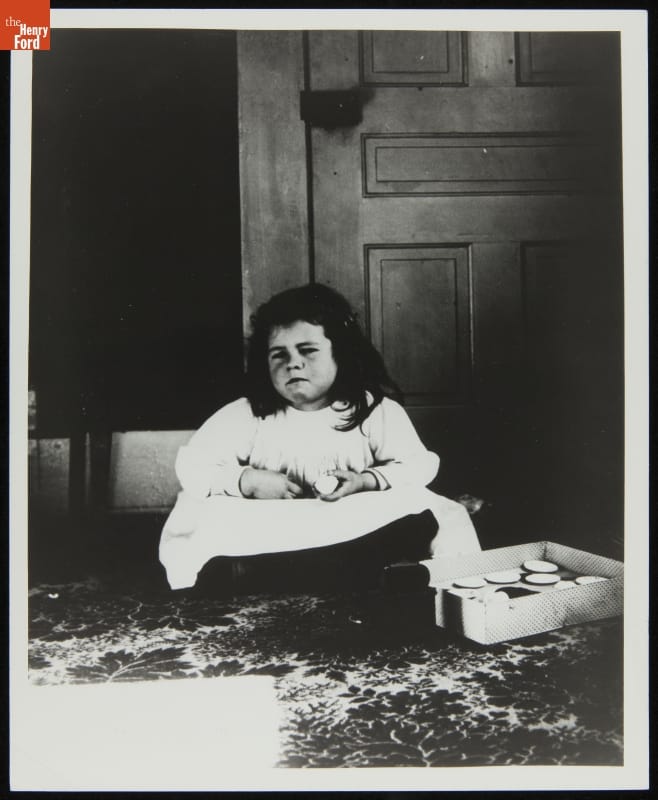 There are also photos outside the house, featuring the sleigh (which is prominent under the tree in the high-res photograph, stacked with books). Behind them in all these photographs is a little fir tree—the tree that was inside the house for Christmas has now been placed out there and propped up in the corner, probably for the winter season. 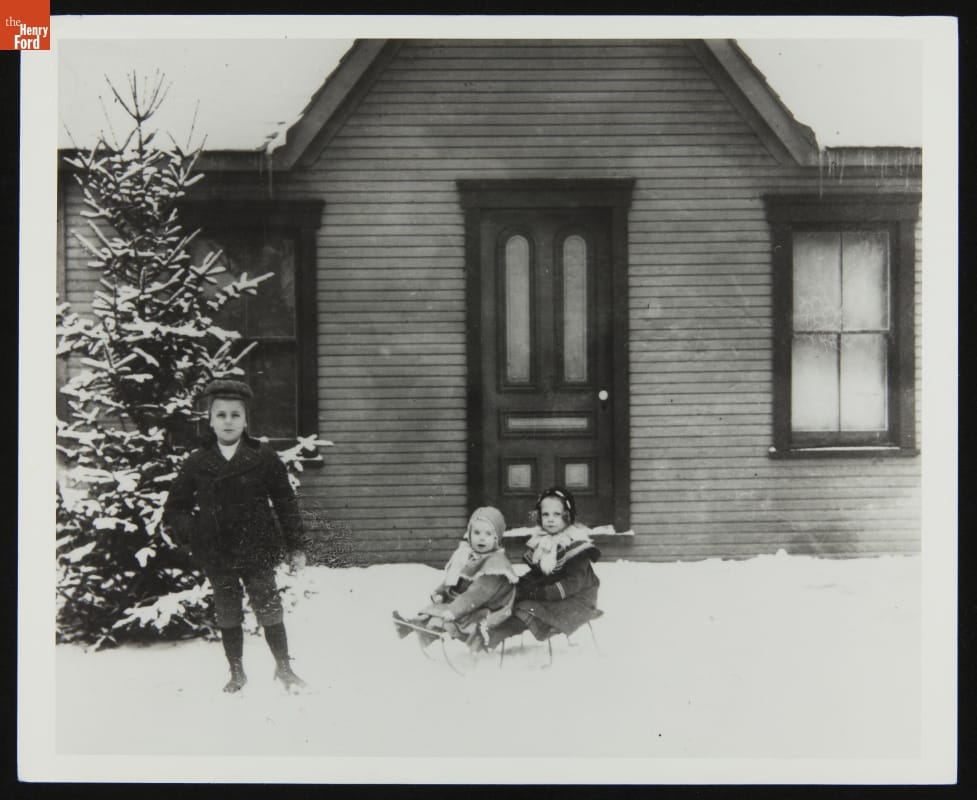 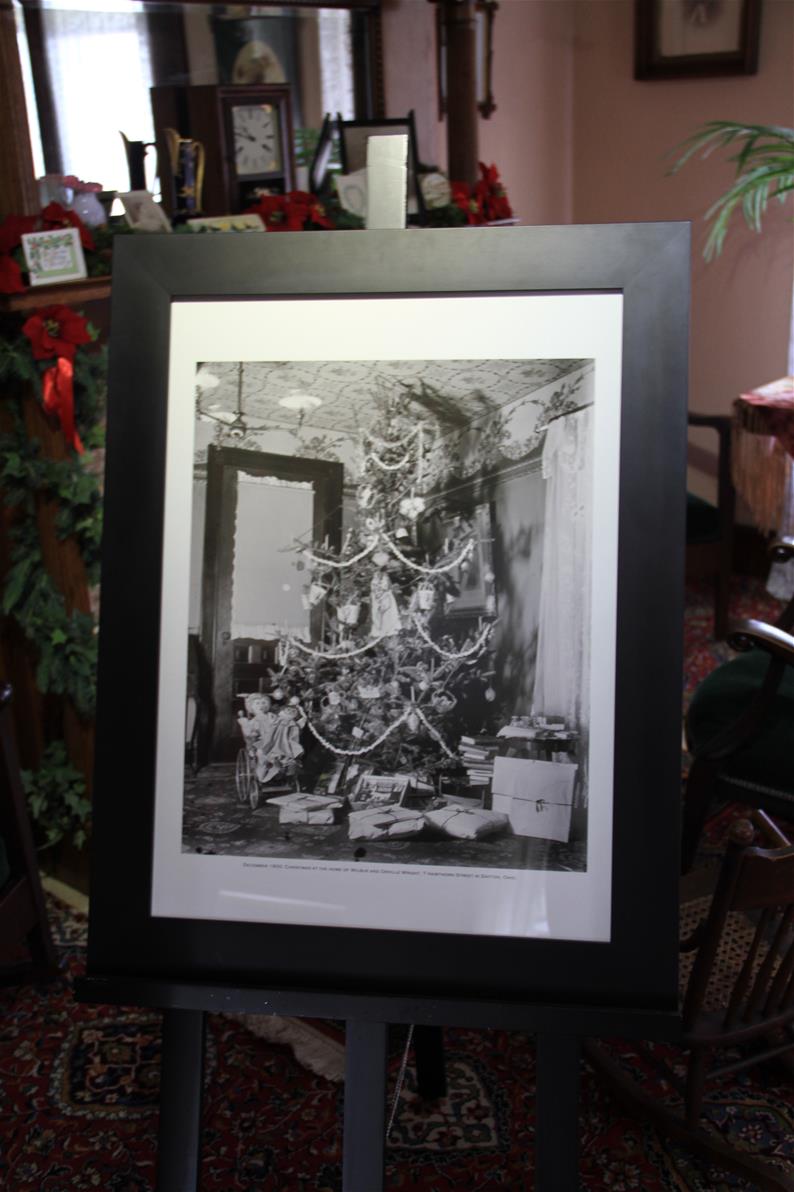 
This post was adapted from the transcript of a video featuring Jim Johnson, Director of Greenfield Village, by Ellice Engdahl, Digital Collections & Content Manager at The Henry Ford. 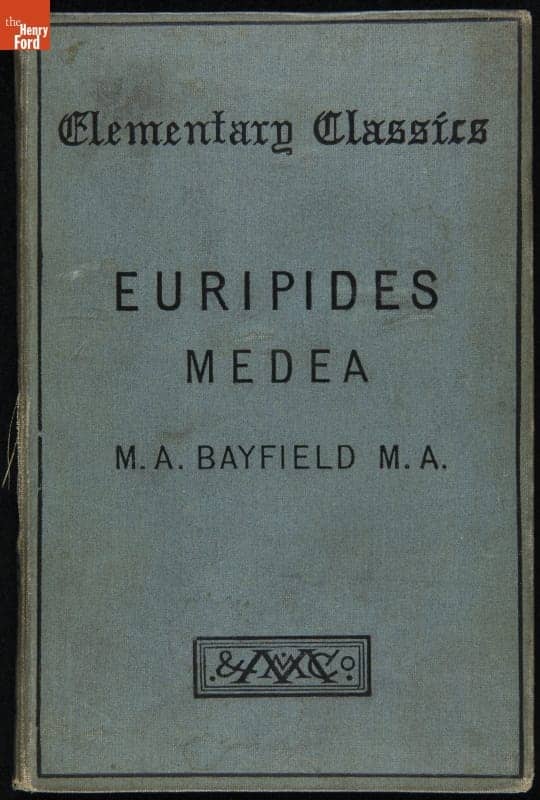 If you visit the Wright Home in Greenfield Village, the presenter in the house will probably draw your attention to the bookcase in the living room.  Many of these books, along with more housed in the Benson Ford Research Center, did indeed belong to the Wrights, and were used by Orville and Wilbur Wright, their sister Katharine, or their father Milton.  We’ve just digitized over 50 Wright family books, including this 1892 copy of Medea used by Katharine Wright.  Other examples include The Principal Works of Charles Darwin, Grimm’s Fairy Tales, and A Manual of Instruction in Latin.  Browse the list of titles to see what other bookish ideas may have influenced the young Wright Brothers by visiting our Digital Collections.

Just Added to Our Digital Collections: More from the Wright Brothers

The Wright Brothers are perennial favorites among our visitors and staff, and so we have just digitized a couple dozen Wright-related photos (including this one showing Orville prepping for a 1908 flight), pamphlets, and other items from our archives, as selected by Chief Archivist Terry Hoover. Explore more Wright Brothers material in our digital collections related to the Wright Brothers, Orville Wright, and Wilbur Wright—or pay a visit to the Wright family home and cycle shop.