Staff Favorites from the IMLS Grant

Now that we are getting close to wrapping up our Institute of Museum and Library Services (IMLS) Museums for America grant to conserve, photograph, catalog, and rehouse artifacts from our collection, some of the staff who have worked on this grant would like to share interesting objects they’ve encountered over the course of the grant. 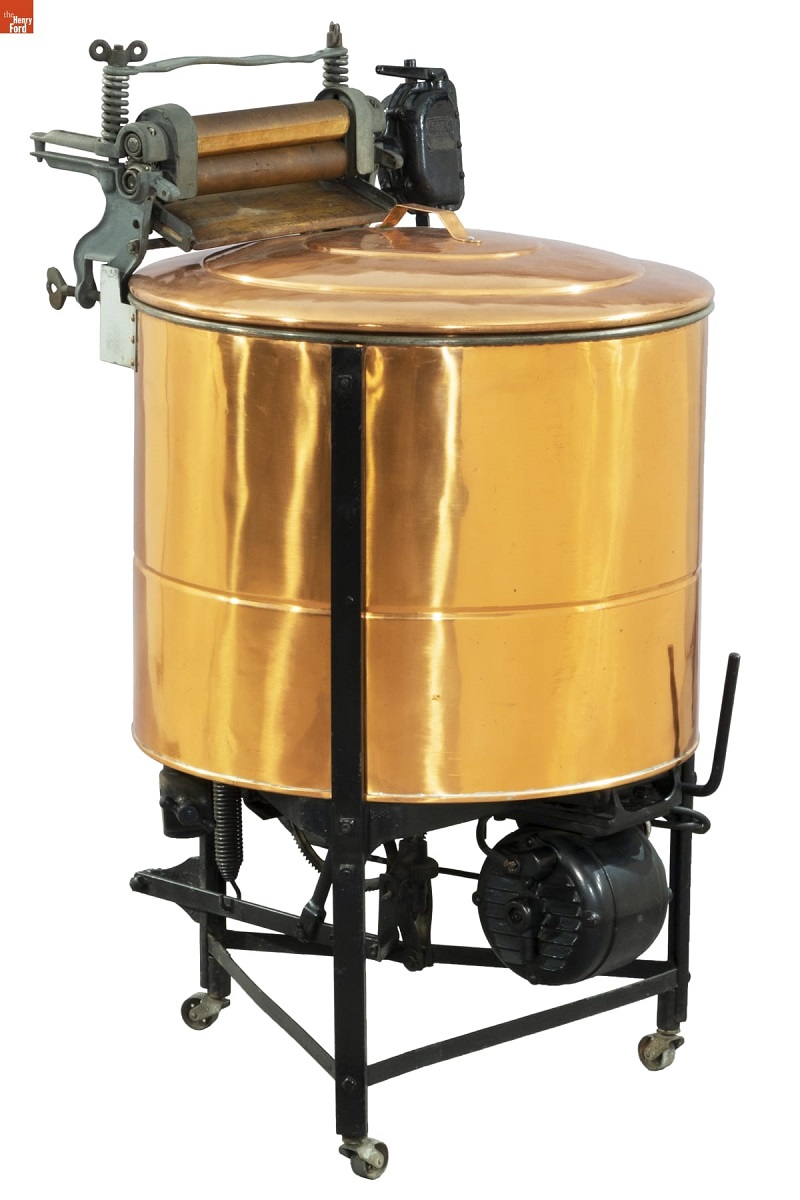 As the IMLS Project Conservator for the last year of the grant, clearing space for larger objects in storage was our main priority. However, there were chances to conserve some interesting objects, one of which was a copper electric washing machine from the early 20th century. The dazzling copper tub was a sight to behold while in the conservation lab. While cleaning it, I remember thinking how grateful I am that technology has come such a long way in making tasks simpler!

Next is this footwarmer from the mid-19th century: 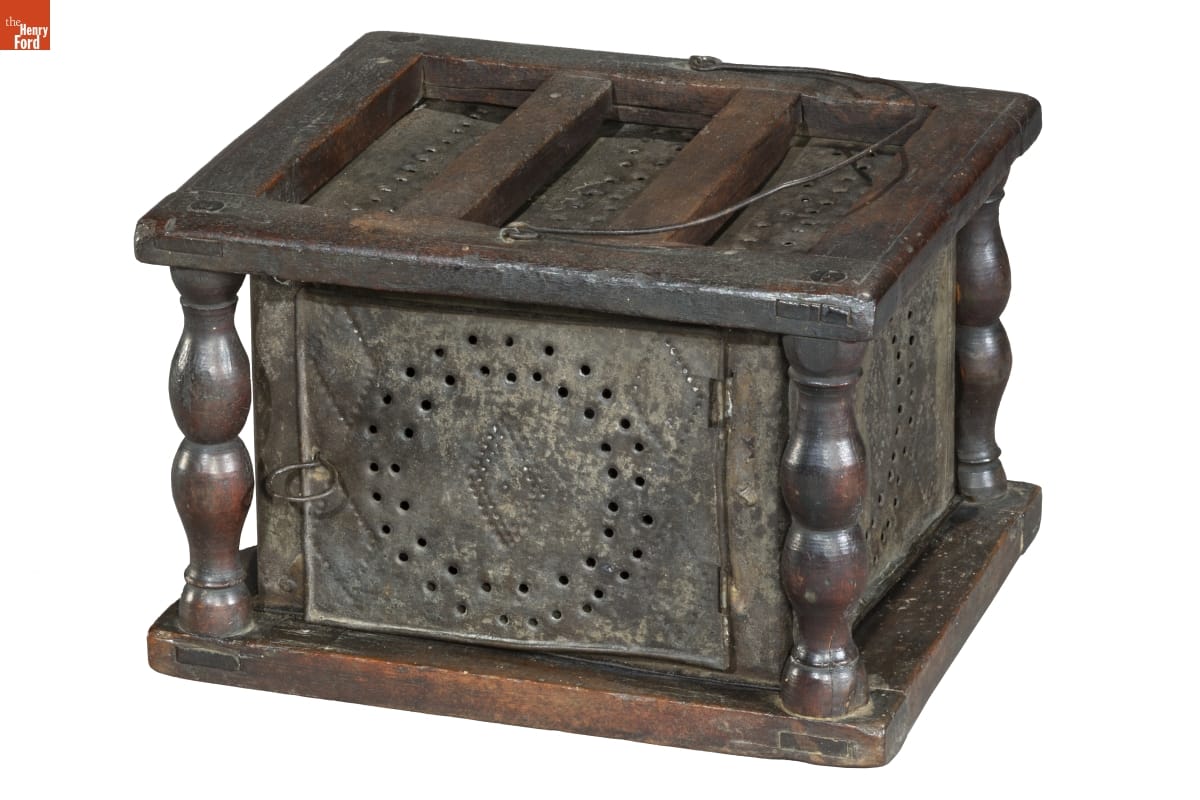 This footwarmer was a cute object to conserve because of the decorative elements in the wood frame and pierced tin stove box. One of the wooden columns had separated from the rest of the object. The opportunity to completely reassemble the object and give it a thorough cleaning made it feel as though the little stove could still be heated for the approaching cold months.

And finally, this lubricator cup assembly: 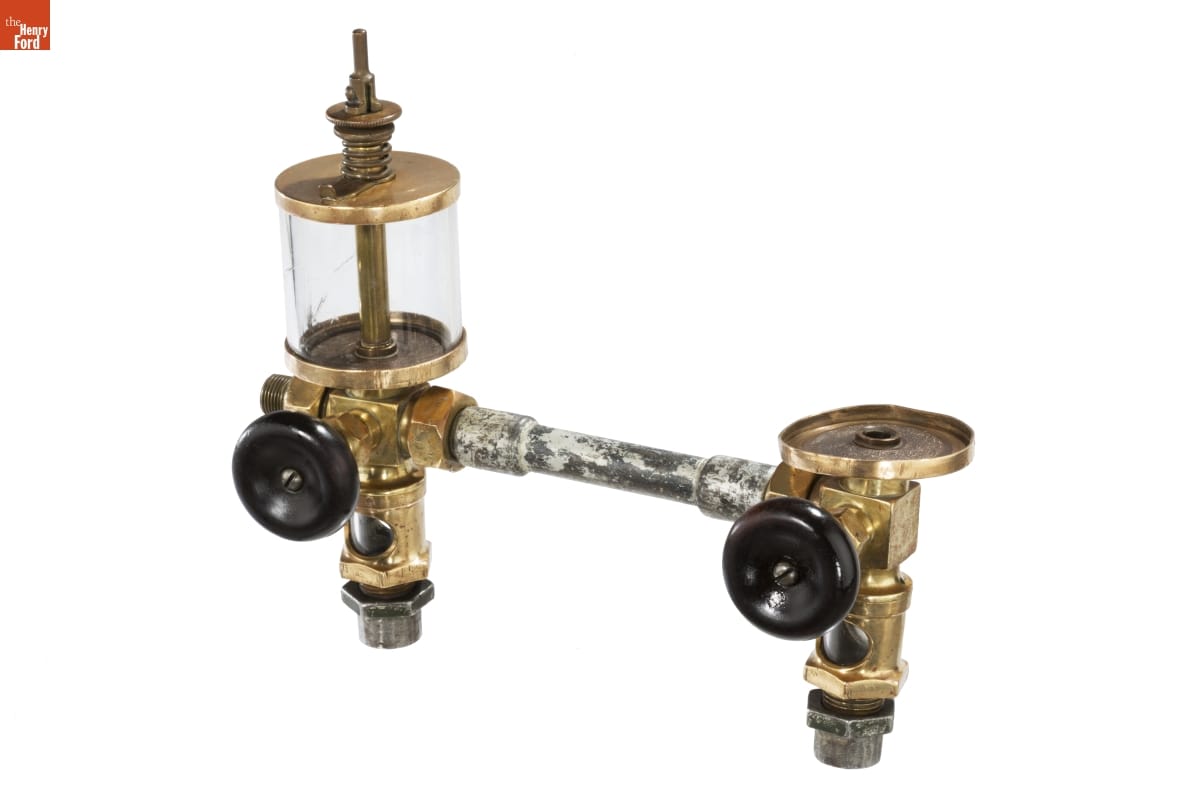 The great thing about conservation is that you are always learning about history through ordinary objects. While the conservation treatment of this object involved relatively simple metal polishing and glass repair, learning about the inventor of the lubricator cup, Elijah McCoy, and his connection to Detroit was fascinating. I highly recommend exploring his story, like I did!

Next up are Susan Bartholomew and me, Laura Myles, Collections Specialists in the Registrars’ Office. We have worked closely cataloging and researching the objects that have been selected for the grant. It was hard to narrow down our favorite objects, or at least the ones we think are the most interesting, but here is a brief overview of some of the objects we enjoyed working with the most.

My name is Susan Bartholomew. I am a Collections Documentation Specialist and simply put, my role in this project was to update or revise catalog records for objects selected for the grant. This included identifying and applying accession numbers, which allow us to track an object both physically and digitally using our database, as well as conducting provenance research, and creating or modifying existing records in our database using cataloguing standards.

My personal highlights for this grant include the following. 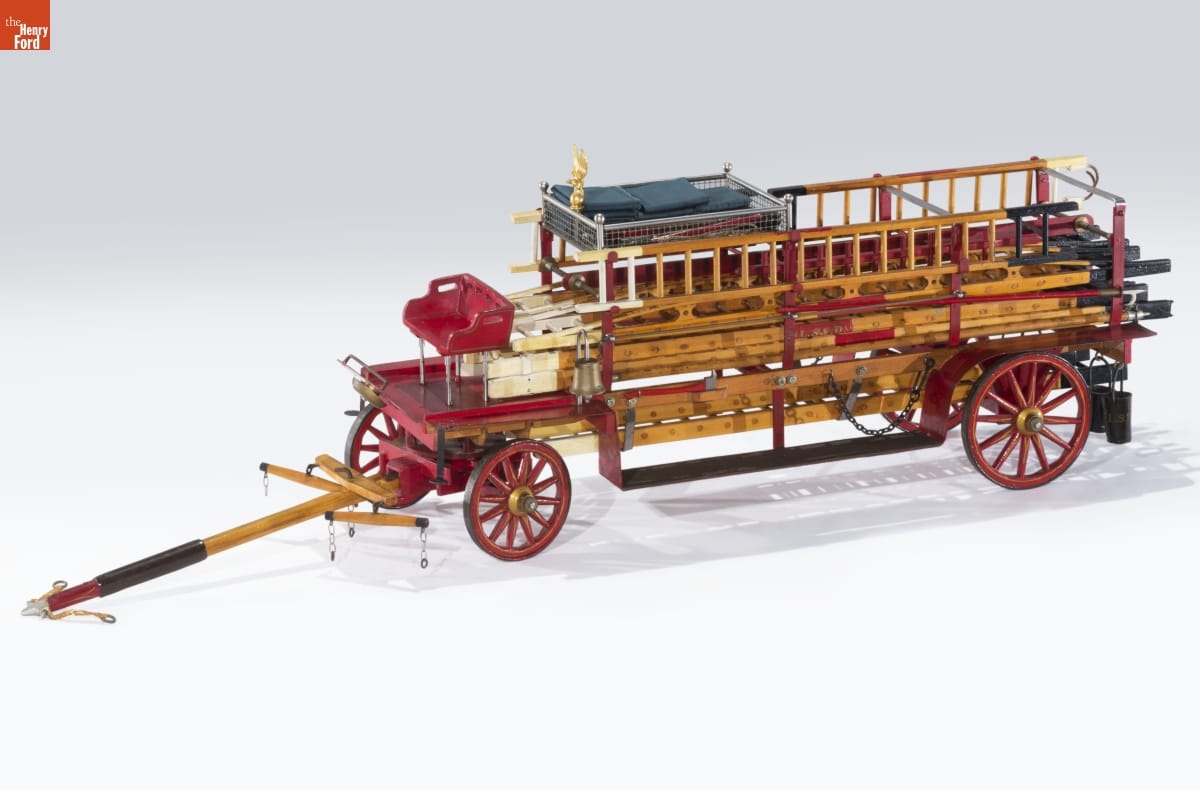 This incredibly detailed handmade model of a turn-of-the-century fire truck is complete with removable ladders, firemen’s tools, and what are possibly the world’s tiniest leather fire buckets. 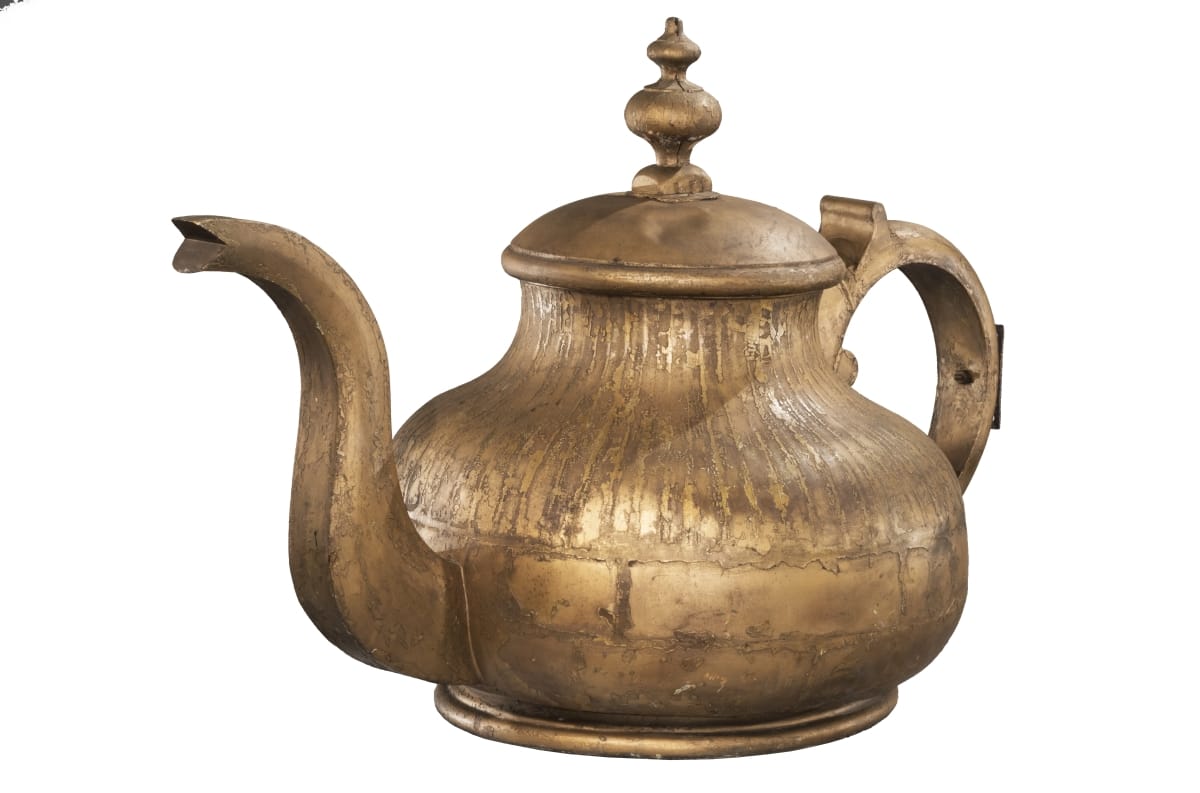 From the tiny to the huge, this is a shop sign in the form of a giant gold-painted tin teapot. It stands over three feet tall and four feet long from spout tip to handle. For more information about this unique giant teapot, check out this blog post Senior Conservator Louise Beck wrote about its surprising discovery. 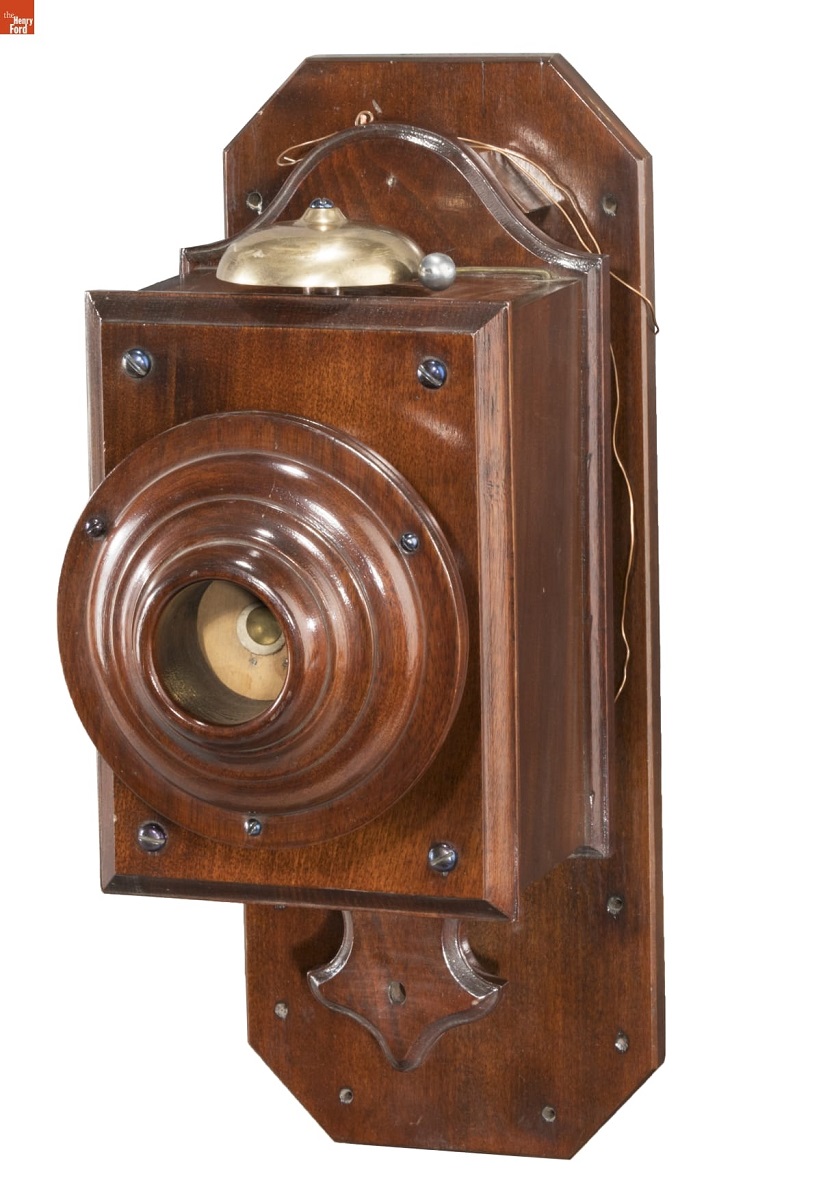 A very early example of a type of telephone that had no batteries, this device operated on the same principle as two tin cans connected by a string, an idea that had been around for centuries. They were used in pairs and were connected over a short distance by a tightly stretched wire. With no dependence on electricity, they were advertised as being more reliable than battery-operated telephones. This unit was one of a pair used by the father of the donor to connect the flour mill he operated to the boats he used to ship his flour. One set would be at the mill and the other was placed on the wharf boat half a mile away.

Like Susan, I have assisted with cataloging, but I also research objects more in depth to uncover missing dates and/or manufacturers, as well as approving records to go online into our Digital Collections. Working on the grant over the last three years has been a wonderful learning experience, as the objects are so varied you really have no idea what to expect. 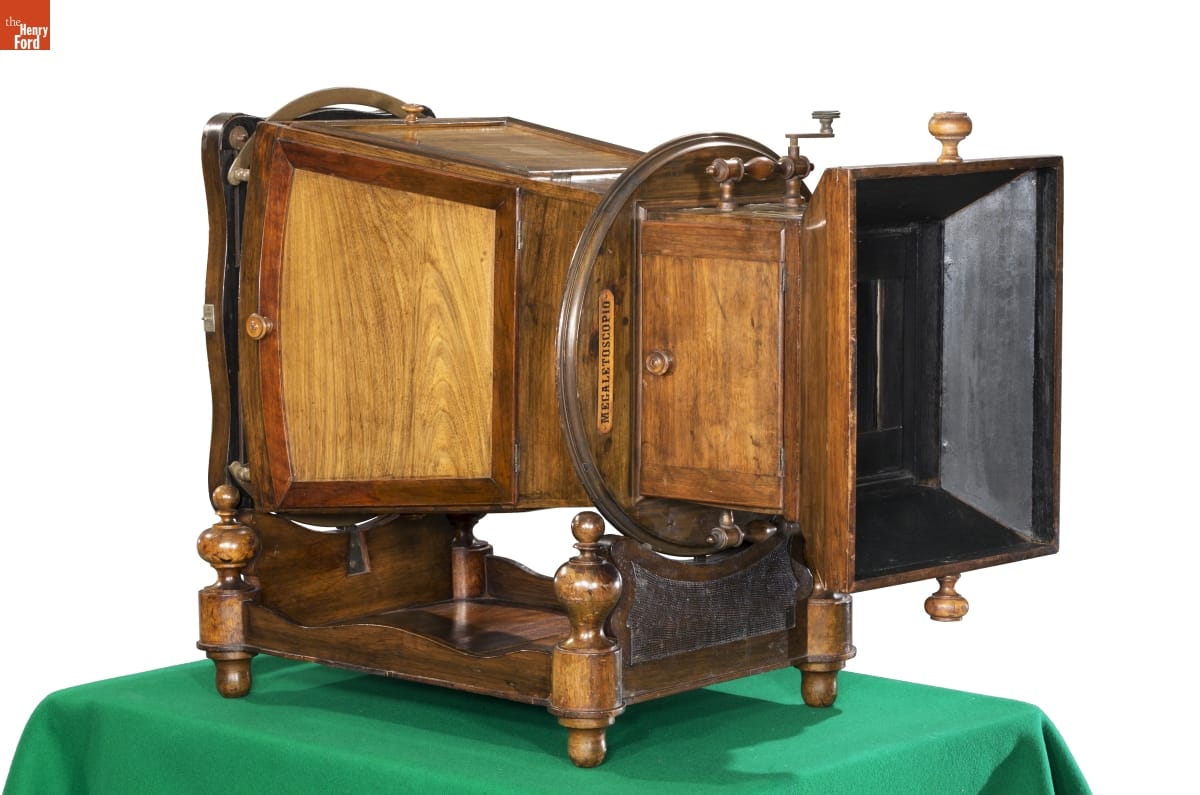 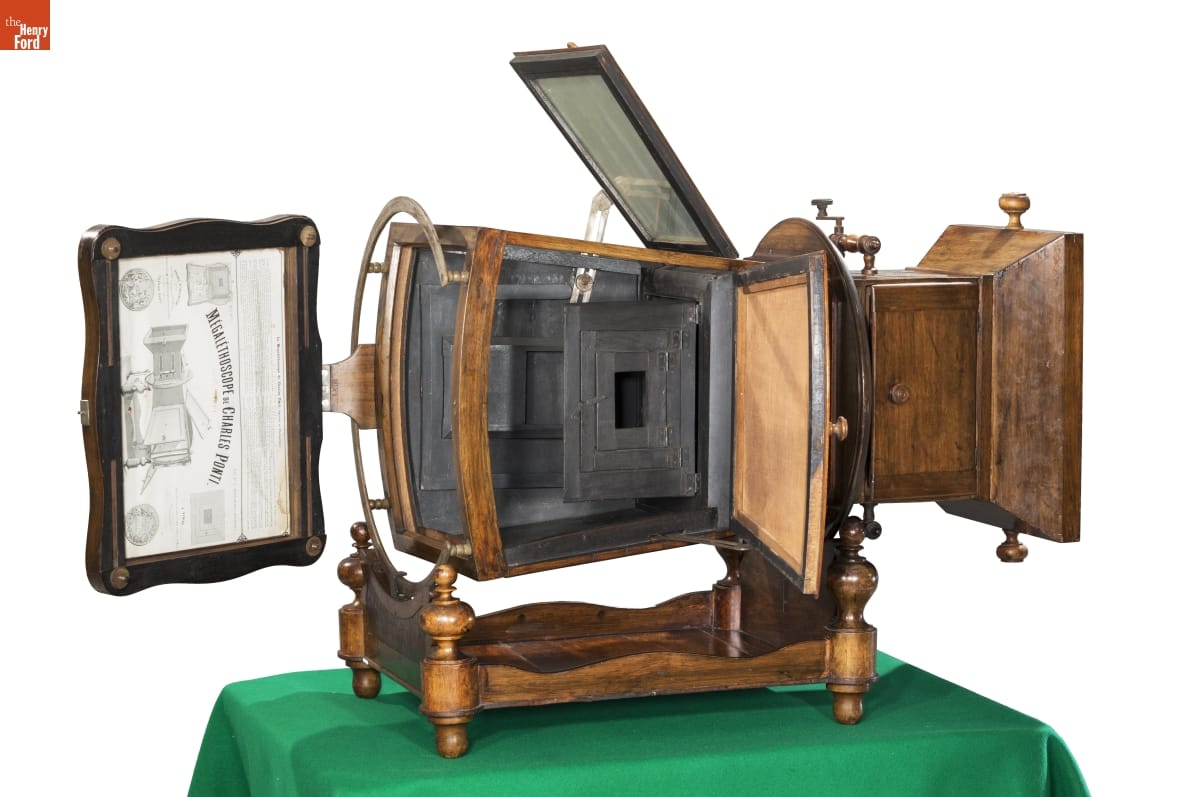 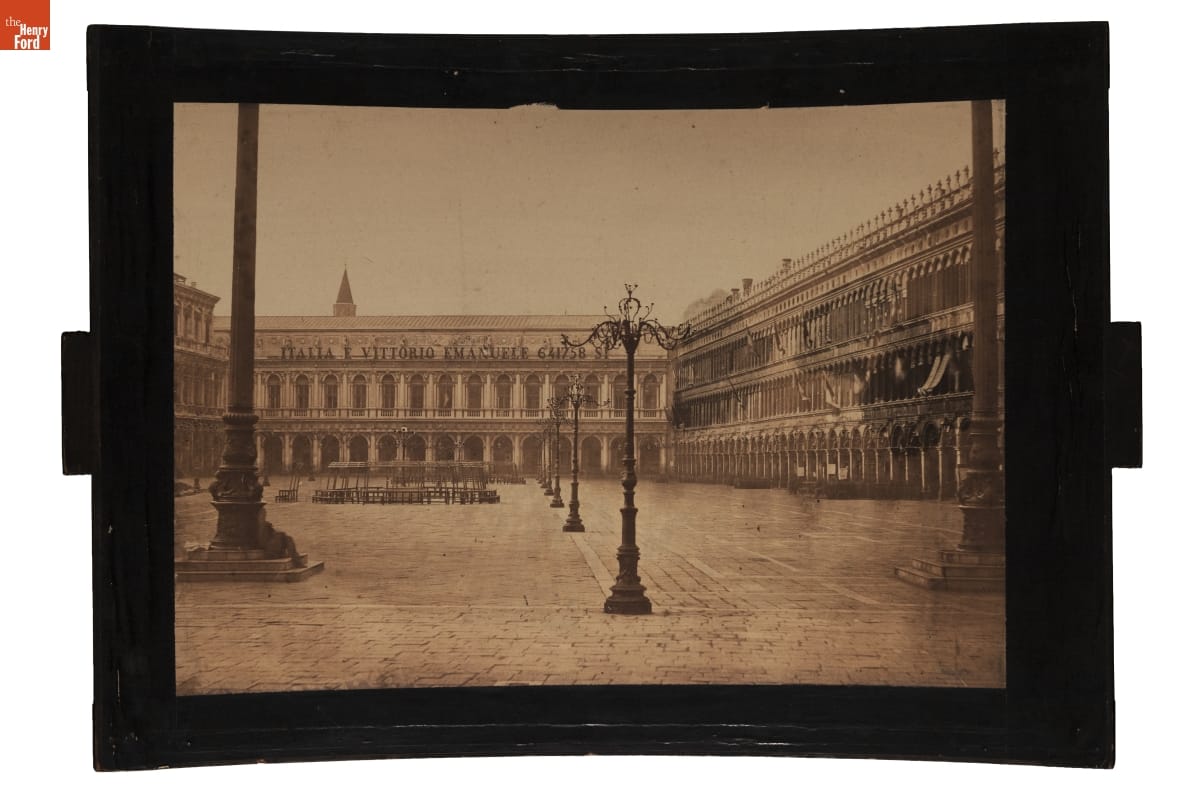 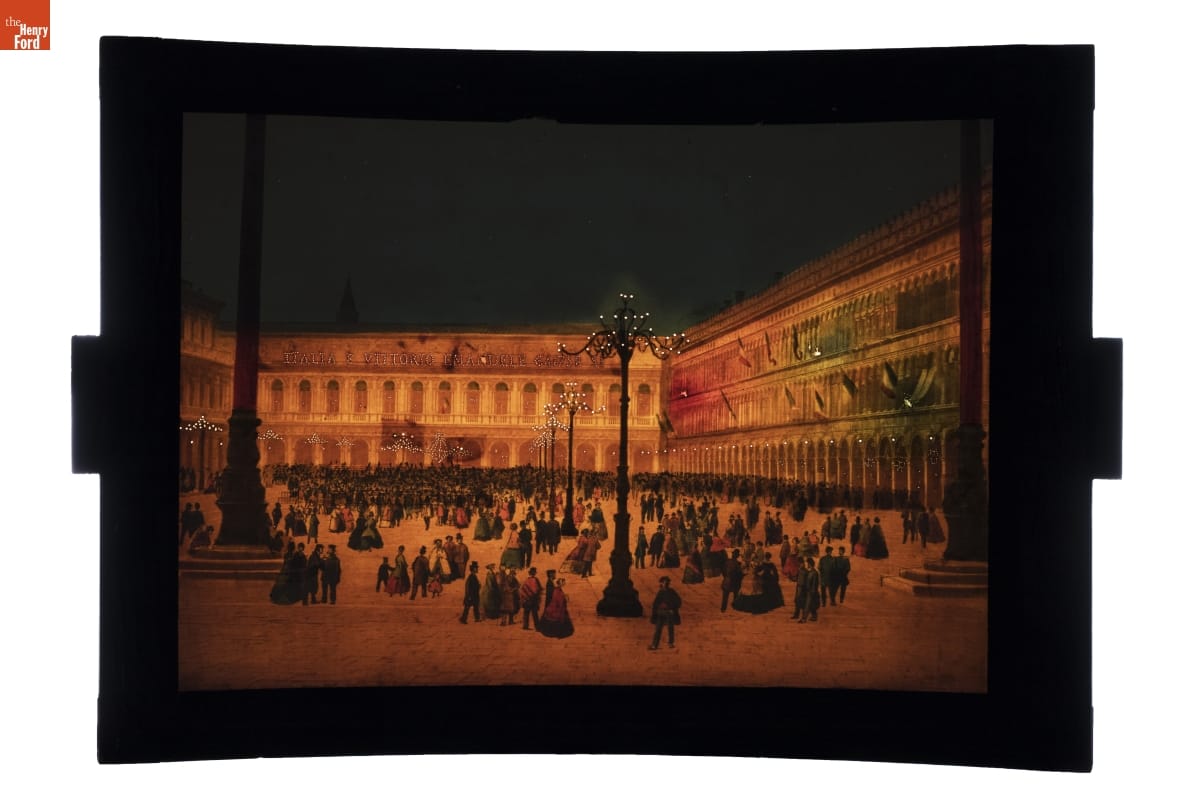 Perhaps my most favorite object is the megalethoscope and its slides. One of the best parts of my job is rediscovering hidden treasures in the collection. While we knew this was something special by looking at it, it was not until we were working on the slides that we knew how truly special it was. 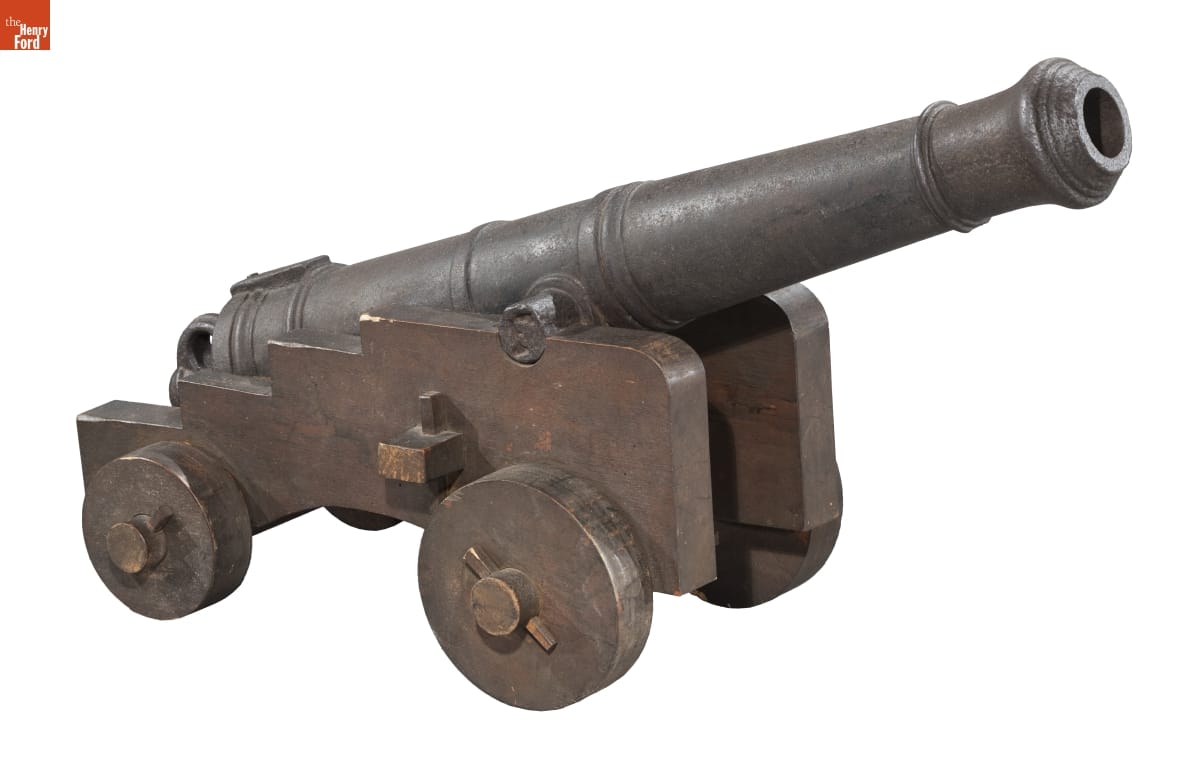 Another object that I enjoyed researching was this naval cannon. While we know this cannon was accessioned in 1929, we do not have information about who made it or where it was used. Based on its estimated manufacture date, circa 1780, and similar design to British artillery, I reached out to the Royal Armouries, which helped eliminate the possibility of it being British in origin. Unfortunately, we do not know its history, but at least we know it was very likely made in the United States to be used on a merchant marine vessel. 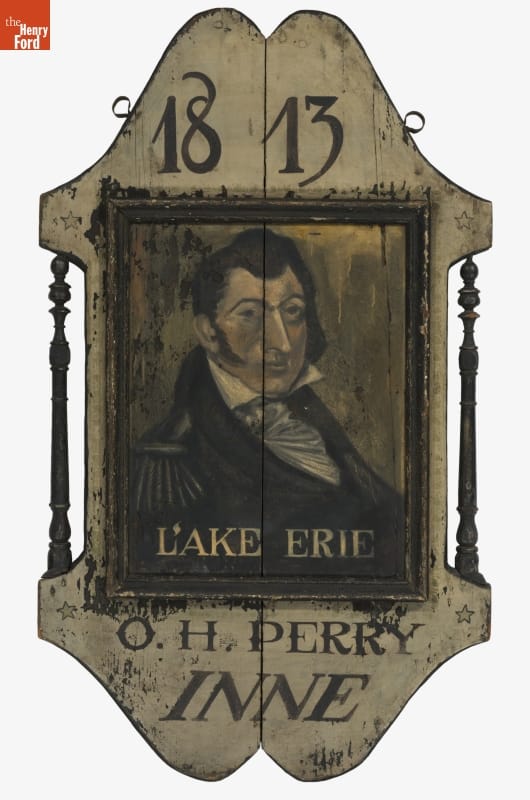 This sign advertising the O. H. Perry Inne is one of my favorites just for its connection to the War of 1812 and Oliver Hazard Perry. On the front of the sign is a portrait of Perry, there is an eagle with seventeen stars above (although there were eighteen states by 1813, further adding to the mystery), and the words “Lake Erie” below on the reverse. Perry was regarded as a hero after defeating a British squadron in Lake Erie, which led to Detroit being freed from British control. Unfortunately, this sign’s history has been lost to time, although there are similar signs that have come up for auction. It seems likely that some local establishment capitalized on Perry’s name, probably along Lake Erie. We can only imagine the building it adorned. 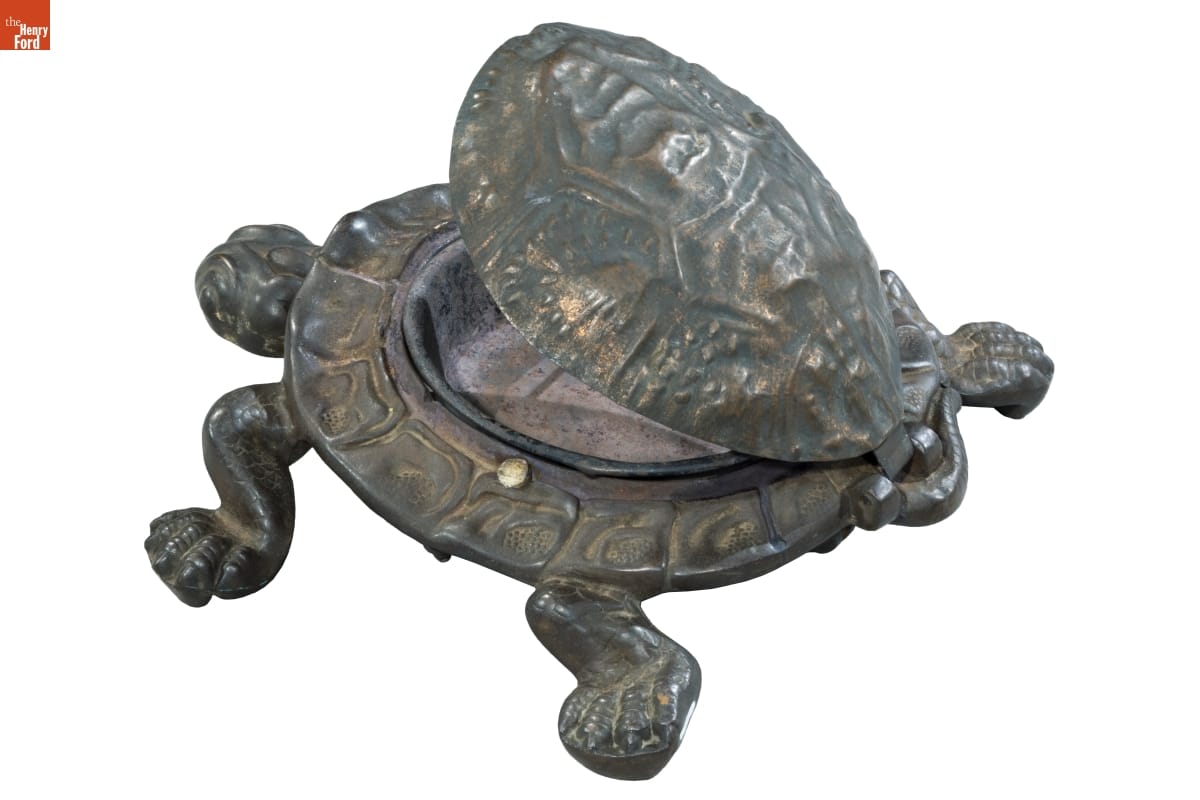 One of the more recent objects to make my short list, and Susan’s as well, is this turtle spittoon. We think it is one of the cutest objects to have come through the IMLS pipeline, especially since spittoons themselves are not the most elegant of objects. Apparently turtle designs for spittoons were quite popular in their time, as well as remaining popular among collectors. The one in our collection is functional: pressing the turtle’s head flips open the shell to reveal the bowl.

This is but a small sampling of some of our favorite objects from this grant. Over the course of the grant so far, we've digitized nearly 3,000 objects, and cataloged and conserved over 4,300 total objects. Unfortunately, this means that we had to be a little bit picky in what we shared here, but hopefully you will discover more of the treasures from our Collections Storage Building yourself while searching our Digital Collections.