An Artist Visits the Bugatti 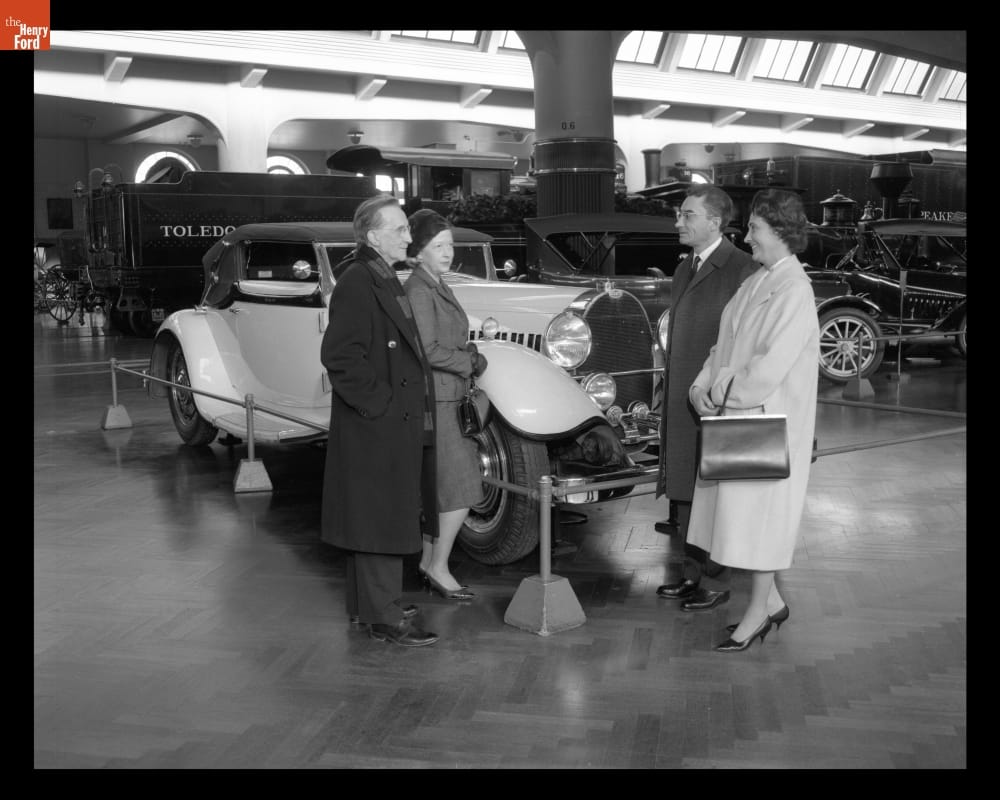 Since 1929, The Henry Ford has hosted a steady stream of celebrity visitors, eager to see our iconic artifacts. In 1961, French artist and iconoclast Marcel Duchamp and his wife visited Henry Ford Museum. If you know Duchamp’s history, you might find it an interesting contrast that the man who rejected art that was merely beautiful in favor of art “in the service of the mind” stopped to pose for this photo in front of the Bugatti. The large, luxurious, and beautiful car seems a far cry from “Fountain,” created by Duchamp more than four decades before. We’ve just digitized dozens of images featuring celebrities of all stripes visiting our campus over many decades—browse more by visiting this Expert Set we’ve created within our Digital Collections.

It's that time of year again when the eyes of the automotive world turn to Detroit. The North American International Auto Show attracts automakers, suppliers, press and enthusiasts from around the globe to the Motor City to revel in the industry's latest technologies and trends.

If you're a racing fan, the fun starts the moment you enter Cobo Center's lobby. Ford Performance has set up shop with four significant Blue Oval racers. The headliner is the new GT that will return Ford to Le Mans in June, in celebration of its historic 1-2-3 finish over Ferrari 50 years ago. But visitors will also enjoy the 2017 NASCAR Fusion, the first-built 1965 Shelby Mustang GT350, and - my unabashed favorite - the 1967 Mark IV that Dan Gurney and A.J. Foyt drove to an all-American victory at that year's Le Mans 24-Hour. (The latter, of course, is a part of The Henry Ford's collection.) Once you get inside the exhibition hall proper, don't miss Juan Pablo Montoya's winning car from the 2015 Indianapolis 500, displayed prominently with the Borg-Warner Trophy. Continue Reading

From its length, one might expect more than 8 cylinders under the Bugatti’s hood. But each of those cylinders displaces more than the whole of a Volkswagen Beetle’s power plant. Four air cleaners stand over the engine, fitted to the four carburetors installed by Charles Chayne after World War II. Two spark plugs protrude from each cylinder. The steering box sits just behind the right fender, in keeping with the car’s right-hand drive layout.

Power and Performance at the 2015 North American International Auto Show

The North American International Auto Show (NAIAS) has rolled into Detroit to give us our annual look at the technologies and trends shaping the automotive industry. The two words that might sum up the 2015 show best are “power” and “performance.” On the former, nearly every manufacturer features some form of alternative fuel vehicle, while some – I’m looking at you, Tesla – offer nothing but. To the latter point, hot new cars from Cadillac, Ford and others promise old fashioned excitement behind the wheel.

Toyota wasn’t the first automaker to market with a hybrid car, but its Prius went on to define the type. The company hopes to do the same for fuel cell vehicles with its remarkable Mirai sedan. The car is powered by an electric motor, but the electricity itself is generated by a chemical reaction between hydrogen and oxygen that takes place in a fuel cell. The only emission from the car is water vapor. The Mirai is about as green as it gets but, while gas pumps and electrical outlets are a dime a dozen, hydrogen fueling stations are harder to come by outside of Los Angeles and San Francisco. Clearly, Toyota is betting on that to change. Interestingly, one of Toyota’s NAIAS displays includes a pair of faux hydrogen pumps. Visitors will be surprised and, Toyota must hope, reassured to see that they’re not much different from gasoline pumps. Continue Reading

Visitors to Henry Ford Museum will see a new vehicle in Driving America. Edsel Ford’s 1941 Lincoln Continental convertible is now in the exhibit’s “Design” section, located just behind Lamy’s Diner. The original Lincoln Continental, built between 1939 and 1948, is regarded as one of the most beautiful automobiles ever to come out of Detroit. It’s an important design story that we’re delighted to share.

The Continental’s tale began in the fall of 1938 as Edsel Ford returned from a trip to Europe. While overseas, Ford was struck by the look of European sports cars with their long hoods, short trunks and rear-mounted spare tires. When Ford got home, he approached Lincoln designer E.T. “Bob” Gregorie and asked him to create a custom car with a “continental” look. Using the Lincoln Zephyr as his base, Gregorie produced an automobile with clean, pure lines free of superfluous chrome ornaments or then-standard running boards. Continue Reading

William Clay Ford, who passed away on March 9, 2014, is remembered for his generous philanthropy, his dedication to the city of Detroit, and his long-time ownership of the Detroit Lions. They are important legacies that will continue to benefit and inspire for years to come. Automotive industry leaders, historians and enthusiasts point to another of Mr. Ford’s lasting contributions: the 1956 Continental Mark II.

While his brothers Henry II and Benson – especially Henry II – made their marks in Ford Motor Company’s business offices, William Clay Ford inherited his father Edsel Ford’s passion for automotive styling, as well as his consummate good taste. Fittingly, the younger Ford’s most important automobile project was a revival of Edsel’s much-admired Lincoln Continental of 1939 to 1948. The revival car, built and sold under a separate Continental Division, not only measured up to the original Continental’s legend, but became a classic in its own right.

At just thirty years of age, William Clay Ford headed a team of stylists and engineers who worked around the clock to design a car of rare style and luxury. The resulting Continental Mark II, with its clean lines and understated trim, stood in stark contrast with the chrome confections typical of the 1950s. Build quality was of the highest order. Suppliers’ parts were checked and re-checked, and factory components were tested and re-tested. Each car was essentially hand-built, and workers were encouraged to report even the slightest defect so that problems could be corrected before a car ever left the factory.

Power came from a 368-cubic inch Lincoln V-8 capable of 300 horsepower. The car was appointed with every available convenience. Automatic transmission, power steering, power brakes and power windows were all standard equipment. Air conditioning was the only optional extra. Quality and luxury, of course, came at a cost. The Continental Mark II debuted with a price tag of $10,000 – more than twice the cost of a conventional Lincoln. The car quickly became a status symbol among business and entertainment elites. Frank Sinatra and Elizabeth Taylor were proud owners, as was Elvis Presley – despite his penchant for Cadillacs.

Ford Motor Company never intended the Mark II to be a mainstream success. Instead, it was a “halo car” that sprinkled a touch of status over the automaker’s entire line. Even with that imposing price tag, Ford undoubtedly lost money on each Mark II it sold. But the company was willing to take the loss in return for the prestige and publicity the car generated. That mindset changed swiftly when Ford became a publicly-traded company in 1956. The limited-market Continental Mark II was no longer sustainable, and production ceased after just 3,000 cars over two model years.

Today the Continental Mark II is regarded as one of the most elegant American automobiles ever built. Some 1,500 examples survive, and bidding is intense whenever one comes up for auction. Mark II owners and fans keep the car’s spirit alive through clubs and car shows, and car magazines regularly include it in their “best ever” lists. It’s an enduring testament to William Clay Ford’s contributions to the automobile industry.